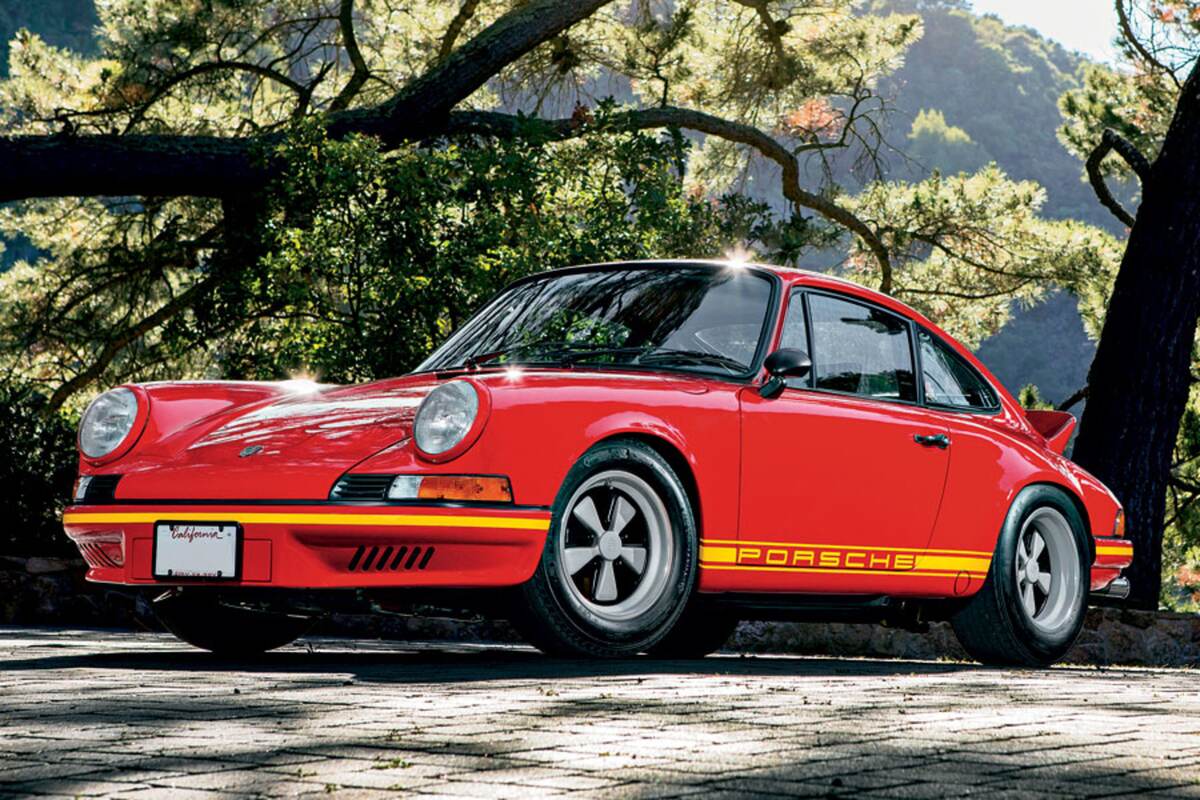 The R Gruppe, a club for early air-cooled 911 enthusiasts, embodies a long tradition that goes back to old-school 356 owners hopping up their cars. Its 300 passionate members drive their ’69 to ’73 long-hood 911s modified in the spirit of Porsche’s Sports Purpose program of that era. Most of these cars are interesting, some are very good and a few are near perfect. Our featured car happens to be one of the latter.

This 1971 911T was commissioned by Martin Brauns, a well-known West Coast 911 racer and an R Gruppe member. But why is this car—known as Red—so good and not just another RS replica?

“I liked my Spec 911 race car and decided to build a street version,” said Brauns, “and I really like the R Gruppe aesthetic. My goal was to build a car that was as fast as my friend’s ’74 RSR race car, yet comfortable enough that—after driving 300 miles—my wife would still want to come home with me.”

Here’s why Red is such a special car: 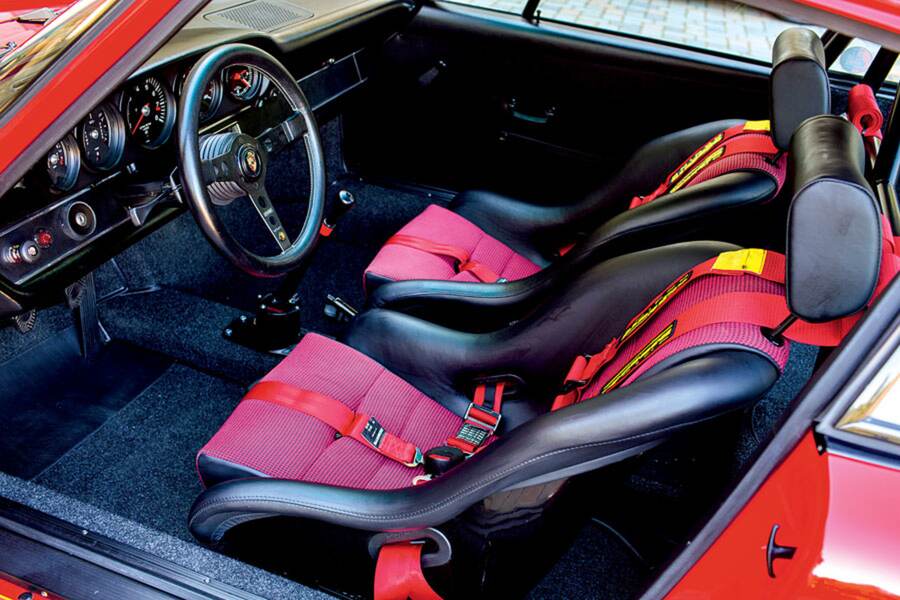 Red is magical to drive

I recently got behind the wheel of Red for some hot laps at Sonoma Raceway (formerly Sears Point Raceway and Infineon Raceway) in Northern California. After feeling the car out in the first few corners, I set up for Turn Three A, a blind uphill righthander with a crest just past the apex. Immediately after turning in, I lifted off the power, which made the supple rear suspension unload and rotate faster than the front.

In 911s, the road starts at the base of the windshield. All you see from the driver’s seat is the road rushing at you. The tops of the fenders act like gun sights that are used to aim the car. After seeing the apex berm move past the right fender, I quickly—but carefully—got back on the power to stop the car’s rotation. Once on the power, the rear “hooked up.” I added more power and got a sensation of acceleration like a kid on the end in a game of Crack the Whip. 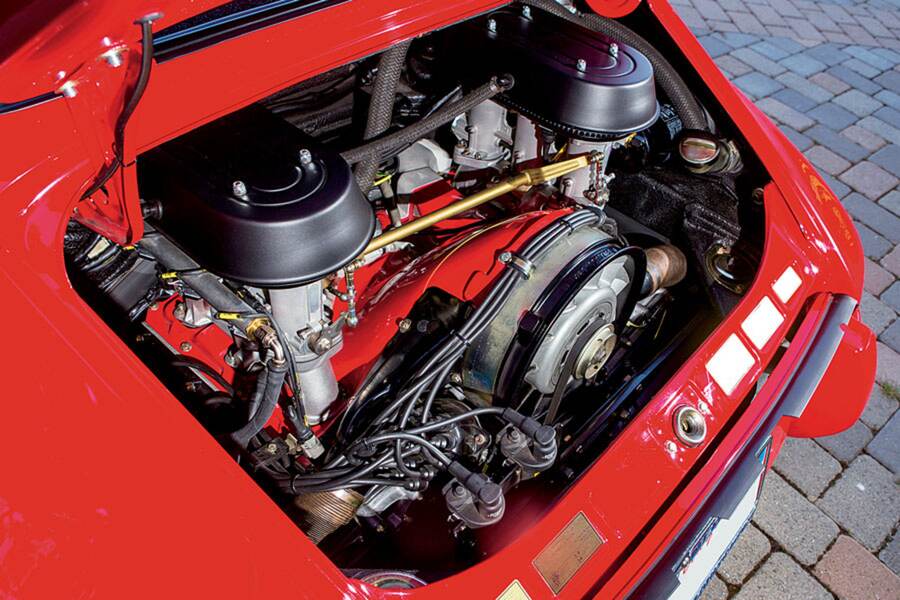 I rocketed out of Three A and added a little preemptive opposite lock to catch the inevitable slide going over the crest. The car settled on the backside of the crest and drifted out to the exit. This, my friends who have never turned off stability control, is pure early 911-style bliss!

The 3.4-liter configuration was never offered by the Porsche factory in an air-cooled motor. It is based on the 3.2-liter motor found in ’84-’89 911s, with 98-mm pistons and cylinders (compared to the stock 95-mm bores) that were developed by the famous Max Moritz racing team in the 1970s to achieve the additional displacement. This motor uses the same bulletproof Metzger engine case as the 930 and is similar to the one used until recently on water-cooled GT3s and Turbos.

“There is something very sweet about the 3.4,” says Walton. “That bore and stroke combination has such great dynamic harmony.” 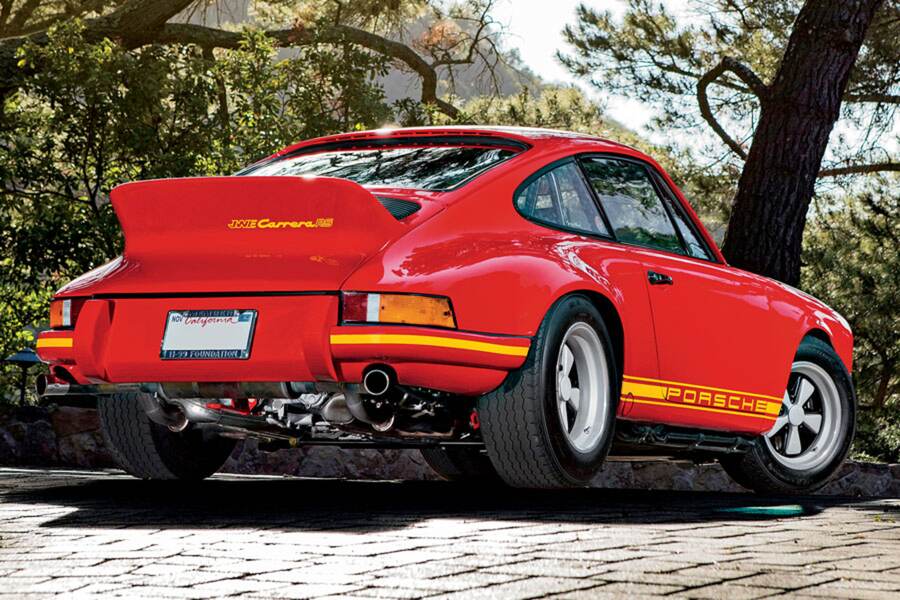 The motor delivers a smooth and tractable 310 hp on the engine dyno. Oil cooling, always an important issue with a big air-cooled Porsche motors, is handled by two coolers: a Carrera 3.2 fender cooler and an engine-mounted cooler.

The 915 gearbox uses stock gear ratios, a precise Wevo gate shifter and a Wevo gearbox oil cooler. A ZF-style limited-slip differential transmits the power to the tires. With 310 hp and relatively narrow 225-mm wide rear rubber, Red needed some help to put the power on the ground.

“Power-on oversteer is one of the fun things about this car,” said Walton, “so it needs a limited-slip diff with lots of lockup to be drivable at the limit. Without it, you can’t get the power down exiting a corner; the rear end would break away abruptly.”

Big power means that fuel consumption is not one of Red’s strong points, so an 80-liter gas tank replaced the stock 62-liter unit. 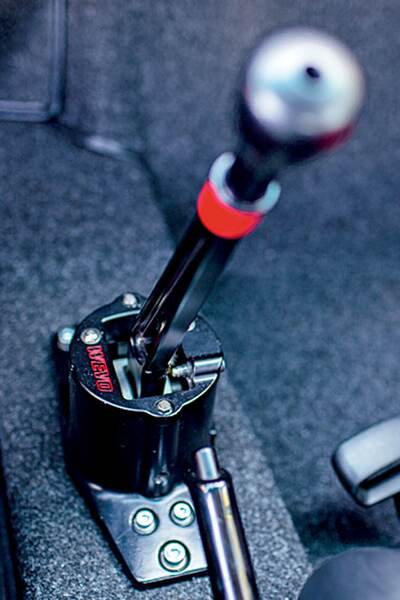 Red has an understated presence

The impeccable red paint is set off by restrained yellow accents and perfect panel fit. As with most modified narrow-body 911s, ’73 RS-style bodywork was the starting point, but the details on this car really make it pop. For example, six shark-gill slits in the lower front bumper vent air to the fender-mounted oil cooler.

The interior exhibits the same level of thoughtfulness as the rest of the car, thanks to the 911 restoration experts at Jerry Woods. Liberal amounts of noise-reducing Dynamat allow the sweet sound of the 3.4 to come though barely diluted. 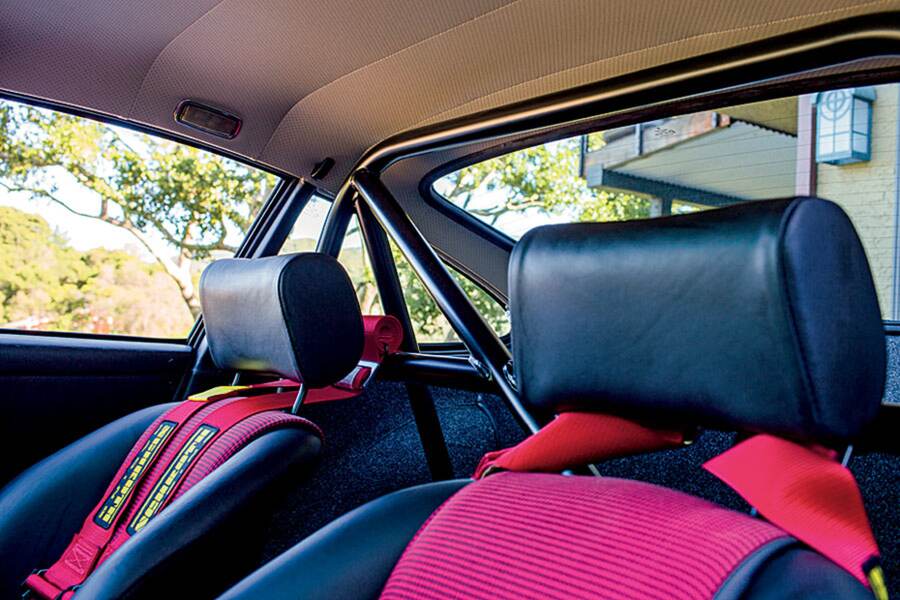 911R-style seats with a sling bottom are used, which provide some compliance and a more comfortable ride than one-piece shell seats. The seats are also compatible with the very comfortable Schroth Profi II ASM four-point harnesses. These are street legal and carry FMVSS-209 approval tags. A custom roll bar was designed to anchor the Schroth harness system in place.

Red is a balance of civility and speed 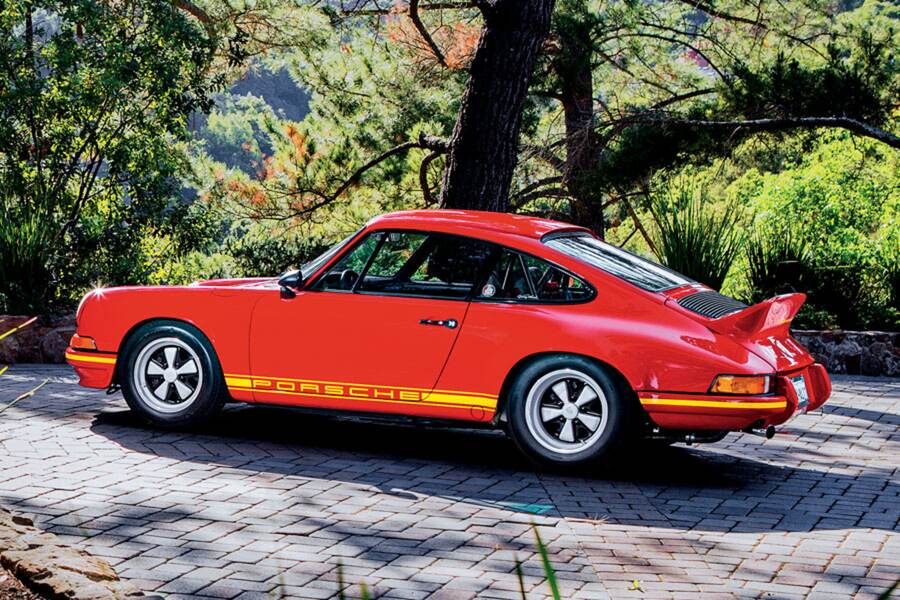 More power necessitates bigger brakes. 986 Boxster brakes were fitted, as they are proportioned beautifully for an early 911.

Compliant and grippy 60-series 215-mm front and 225-mm rear Avon CR6-ZZ tires were chosen for the deep 15-inch wheels. Many people who build these cars select wider tires, which can work well for track cars, but not as well for street cars.

The narrower tires on Red improve ride quality and make the car much more entertaining to drive at the limit because it’s so much easier to slide. The combination of suppleness and control is unlike anything I have experienced in a trailing-arm 911, and it works beautifully on both the street and the track. 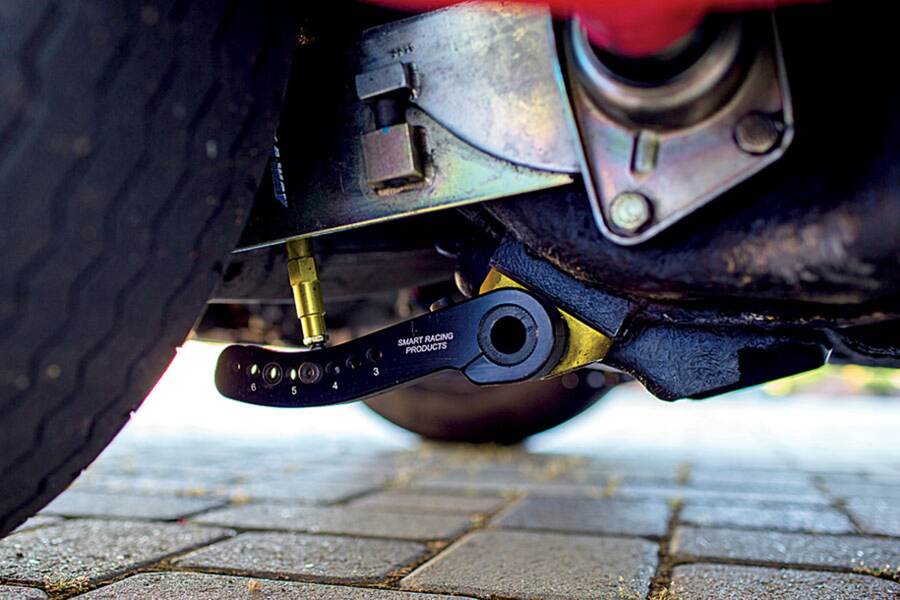 Red has no old car disadvantages

This car is a revelation. As I strapped into it for my first drive in the Coast Range hills of Northern California, I was struck by the fresh and perfect details: no balky window winders, sticky door latches, cloudy instrument bezels or cracked rubber seals.

The motor fired instantly, had an unbreakably modern feel and was perfectly balanced; the sound damping filtered out just the right amount of noise and vibration. Clutch take up was smooth and shutter free as we got rolling. With about as much torque as a small-block Detroit V8 in a 2,200-lb. car, Red gathers momentum effortlessly. By the way, that’s 1,000 lbs. less than a new 991.

Brauns wanted the “camminess” of the early pre-smog 911s. Getting into the throttle at 4,000 rpm, the car “gets up on the cam” and the lovely howling mix of exhaust, fan and induction noise of a hot 911 flat six fills the cockpit as the road starts to come at you startlingly quickly. 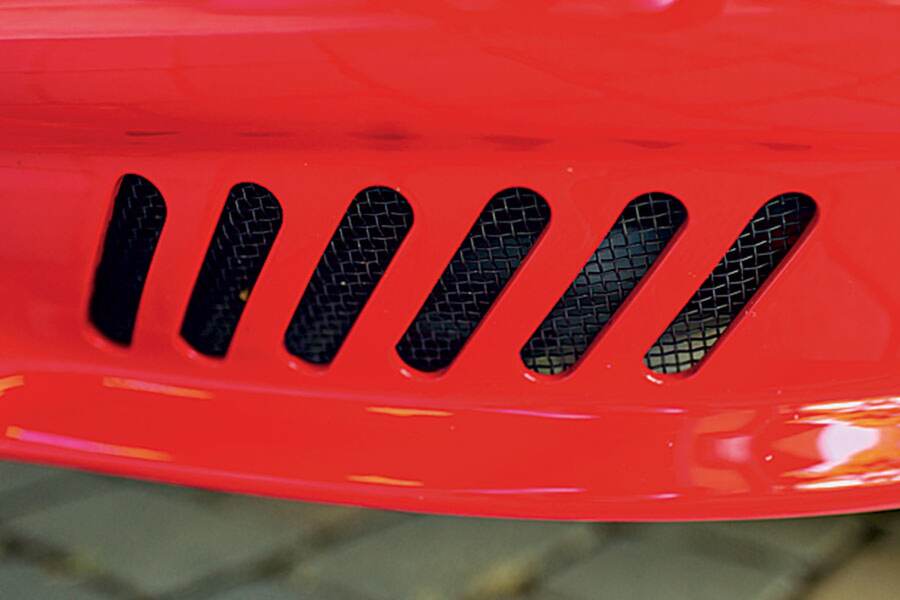 The acceleration is like a ’74 3.0 RSR, just as Brauns wanted. After owning and driving lots of modified 911s over the past 40 years, I am reminded yet again that wider tires, bigger brakes and stiffer suspension do not always make a more enjoyable or even faster 911, but more power is always welcome!

Red is a sleeper

I just love cars that are faster than they look. The track part of this drive was done on a test day prior to the Sonoma Historic Races.

The grid was filled with ’60s Trans-Am Camaro and Mustang race cars. Their unmuffled V8s bellowed like bull elk in mating season on the National Geographic channel, and their enormous slicks were poised to crush any small critters inadvertently crossing the track. In a street-driven ’71 911 with a muffler and license plates, I felt like Pee Wee Herman on his Great Adventure.

Sonoma Raceway is a roller coaster of a track, continuously twisting with lots of elevation changes, blind corners and almost no straights. After a few laps of settling in, it was clear that the older Trans-Am cars were wicked fast on the straights and had very good mid-corner speed, but they were sitting ducks under braking and at corner exit.

I was having a great time working my way past these beasts when I closed the gap on a ’69 Camaro after the exit of Turn Three A. I saw him looking in his mirror, alarmed at the 911 street car inches from his bumper. He missed his brake point for Turn Four, locked up the brakes and harmlessly slid off the exit as I slipped by. I love this car!

In the same lap, exiting Turn Ten on the short straight to Turn Eleven, I slowed from maybe 110 mph to 30 and passed two more Trans-Am cars hard on their feeble brakes while I was still flat on the power. Feeling expansive, I power-slid around Turn Eleven just to show off. Red is just that kind of car.

A wise man once said, “life is just a set of experiences and the only material things that matter are those that enhance those experiences.” With a power-to-weight ratio of a new GT3 and no electronic nannies to keep you out of the weeds, Red is one experience-enhancing machine. The main CPU is between the driver’s ears, not in an on-board computer.

Red is the classic 911 on steroids. If you think trailing-throttle oversteer is a benefit, you’d love this car. The newest Porsches are, of course, fabulous and much better daily drivers than the older cars and they still provide the best driver involvement of any modern car. However, there really is no substitute for the driver involvement in a well setup air-cooled 911. 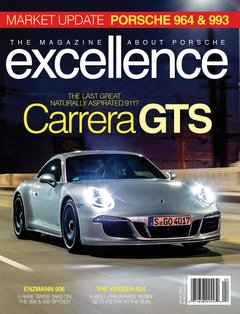