This 962’s days on the track are far from over 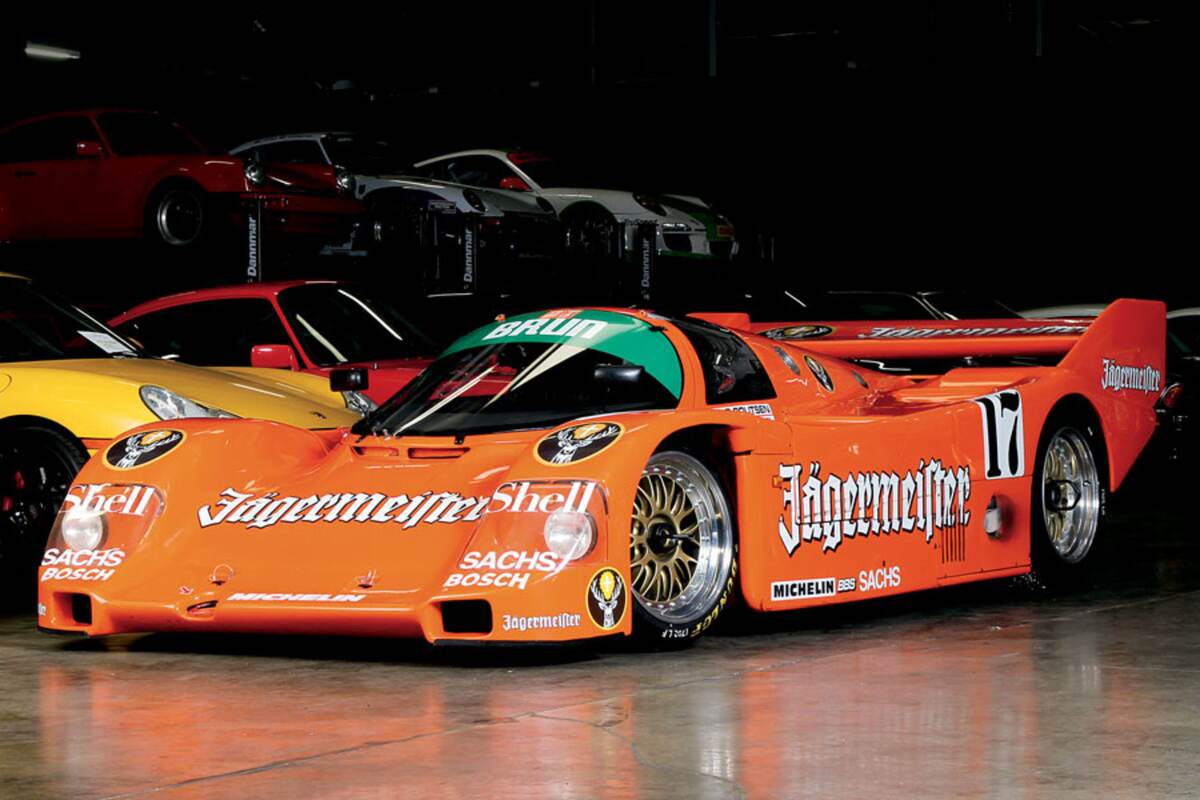 The arresting orange hue of a Jägermeister race car is one of the most iconic sights in all of motorsport. And the story of this particular machine, with a race-proven pedigree from one of Porsche’s most reputed customer program members, is as intoxicating as the German digestif itself.

Brun Motorsport first purchased chassis 962-117 as a replacement tub for chassis 107, which was damaged in a crash at Le Mans in 1985. Once it was assembled and put into service, chassis 117 enjoyed a respectable career.

In the 1986 running of the 1,000km of Spa, Thierry Boutsen and Frank Jelinski drove this Jäger 962 to victory over a 6.5-liter V-12 Jaguar XJR-6 by mere seconds, making it one of the closest finishes in WSC history.

Later that season, car owner Walter Brun himself took the wheel and came up victorious at the Interserie Zeltweg II race at Austria’s Österreichring. This circuit was renamed the A1-Ring until 2004, when a man named Dietrich Mateschitz gave it wings and named it the Red Bull Ring. 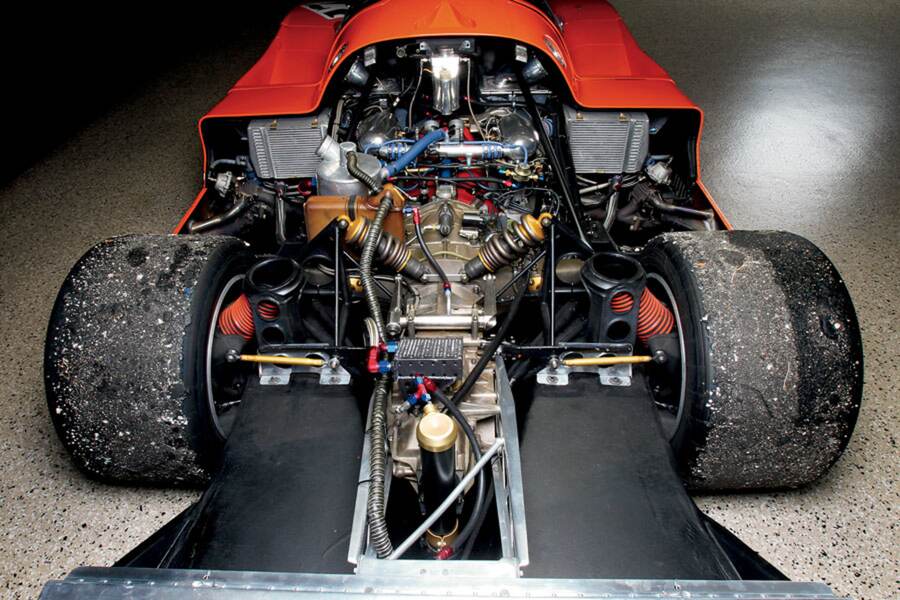 Once Brun decommissioned the car, it was sold to a Central American investor. For some time after this, the Jäger 962 languished in the Imperial Palace Hotel’s car collection—now known as The Auto Collections—in Las Vegas. While this is an impressive assemblage of automobiles, it would be a travesty for chassis 962-117 to live out its days collecting dust between a decrepit Duesenberg and Johnny Carson’s Chrysler.

Fortunately, the saga of this 962 doesn’t end here, although there are some large gaps in the timeline—which, coincidentally, is the same fate that awaits those without a healthy respect for Jägermeister.

A Dream in Pieces

Chassis 117 resurfaced in 2008, when a previous owner enlisted Porsche Motorsport North America (PMNA) in Santa Ana, California to rebuild the engine and gearbox and to restore the engine wiring loom and harness. PMNA had recently established a new restoration department as an extension of Porsche AG’s Motorsport Division in Weissach, Germany. Sadly, this owner did not entrust the entire restoration to PMNA, so the bodywork, tub and other items were sent elsewhere.

Our story doesn’t pick up again until last year, when Tom Haacker of Santa Ana, California purchased the car. Haacker is part successful businessman, part Porsche racer and part philanthropist. His latest cause was to restore chassis 117 to its former glory. 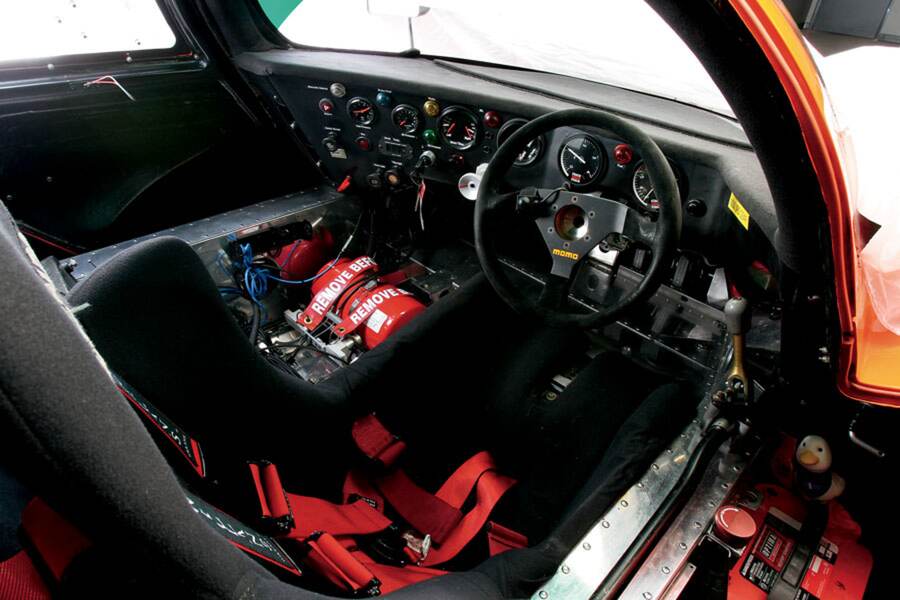 “I really didn’t seek out this car,” says Haacker. “It was more or less an opportunity that presented itself and it was a great car to buy considering its history. The car was located in Southern California, so it was very nice to see the pieces of the car in person.” Yes, Haacker did use the word “pieces” to describe his first sight of chassis 117. As luck would have it, he had some friends to help him put it all together.

Haacker had learned of the car from Rob Morgan at Truspeed Motorcars of Costa Mesa, California. Truspeed specializes in pre-owned contemporary and classic Porsches and also operates a rather robust racing program. Morgan connected Haacker with Porsche historian Kerry Morse.

“Kerry knows more about older Porsche race cars than most people in the world,” said Haacker. “You can tell him the VIN of a 935 or a 962 and he can pretty much tell you the car’s ownership history and major accomplishments without researching it.”

It seems that Morse was also in possession of a treasure in the form of chassis 117—well, the pieces of it. The chassis itself and the major components were in an airport hangar in Chino, California, while the body was housed in a Los Angeles restoration shop.

The previous attempt to restore this chassis could be at best described as incomplete or, more accurately, an epic failure. When PMNA rebuilt the engine and gearbox in 2008, the car was torn apart at another shop with the intent of a full restoration. The original tub was cleaned up, but its full restoration and reassembly went unfinished. 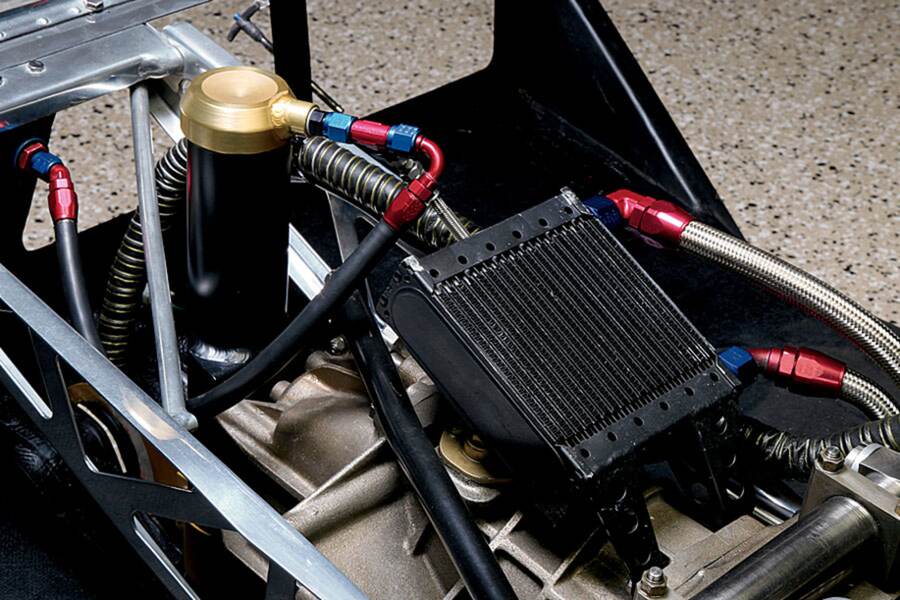 “It is a very risky thing to buy a car in this state, since you don’t know what could be missing,” said Haacker. “We tried to simplify it as much as possible to make an educated decision. We knew what the purchase price was in its current condition. We knew that the car needed work to be done. However, we knew all the major components were there and all three of us felt good with the purchase price, based on having all these items in their current condition. We also knew there would be some surprises. We compiled the cost of the car and our estimated PMNA build cost and made a deal right then and there.”

This sounds almost too easy, as we’ve seen more tense negotiations over a set of Fuchs alloys with curb rash on Craigslist. No matter, as this is how, in the spring of 2013, chassis 962-117 returned to PMNA for a complete and proper restoration.

PMNA does not mess about when it comes to such business. They immediately gathered all the aforementioned pieces from their various locations. PMNA also went straight to the source, obtaining original drawings of the car from Porsche Motorsport in Weissach and consulting with technical experts from Porsche and parts suppliers. They sourced items from all over the world, going so far, in some cases, as to remanufacture parts themselves.

For instance, the rear control arms were badly corroded, prompting PMNA to painstakingly reproduce them based on copies of the originals. Inside, the pedal assembly was cracked, but as luck would have it, PMNA had a new original set in stock. The mind reels as to what other sort of gems lie within the PMNA warehouse! 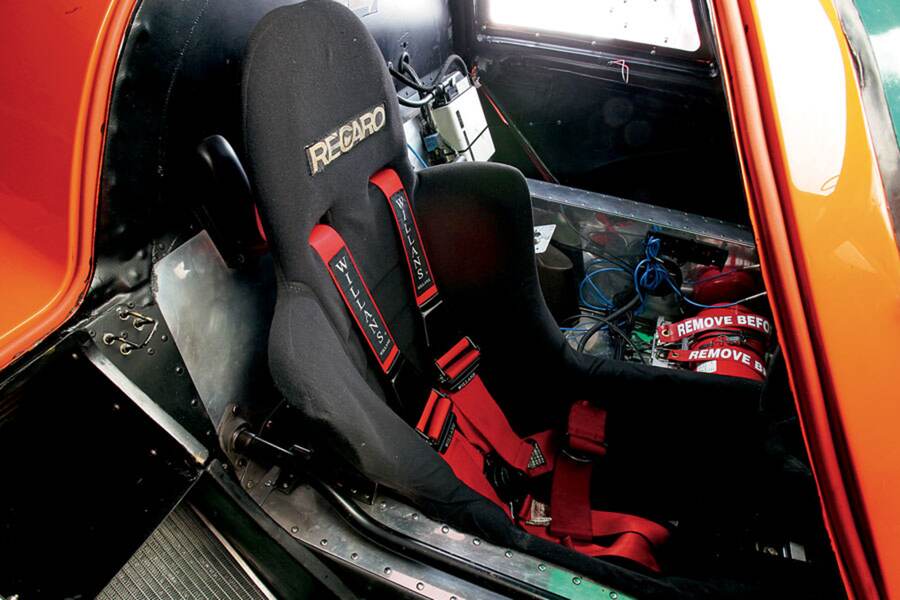 When PMNA originally restored the engine and drivetrain in 2008, it was upgraded from a 2.8-liter Type 935 engine with Bosch 1.2 fuel injection to a 3.0-liter mill with Bosch 3.1. PMNA rebuilt the original KKK AG type turbos with new bearings and seals. Except for a revised bore and stroke (95 and 70.4 millimeters respectively), everything else on the engine retained the original factory specs.

Once the engine rebuild was complete, PMNA put it on their engine dyno where it matched the original 680-700 horsepower rating, which was limited under the 1989 Group C tech regulations.

Sadly, after PMNA performed this initial restoration in 2008, the engine sat unused until last year. Anything deteriorates after a half-decade of disuse (just ask our pectorals); such was the case with the oil and water seals on chassis 117. They were dry, frail and leaking severely. PMNA replaced all the faulty gaskets and seals, fired the engine on the dyno and, as a testament to their previous work, it ran flawlessly.

Not everything was so easy, though. One of the greatest challenges of this restoration lay in the electronics, which had been torn apart by a previous owner. It was almost as if Joseph Lucas himself, under the influence of cold medicine and bath salts, performed the wiring work on the previous restoration attempt. The harness was badly damaged, much of it was missing and what remained was improperly labeled. Once again, PMNA leapt into action.

Since the Jäger 962 was scheduled to appear at the 2013 Monterey Motorsports Reunion as part of a special Porsche display, the restoration needed to be completed quickly. PMNA finished the project in just 66 days—about half the time they would normally devote to a build of this magnitude.

Chassis 117 made it to Mazda Raceway Laguna Seca for the Historics on time. Haacker drove it in the Group 6B race, which is for ’81-’89 FIA Manufacturer Championship and ’82-’91 IMSA GTO and GTP cars. Out of 32 machines entered, Haacker brought 962-117 home to a respectable 11th place finish—the same finishing position it scored in its last professional race.

Haacker, who has had a fair bit of time on the track, says he’s never driven anything else like this. “It’s an incredible experience every time I take her out,” he enthuses. In addition to Laguna Seca, Haacker has driven the Jäger 962 in Historic Sportscar Racing events at Daytona in November 2013 and at Sebring in a support race for the 12 Hours in March 2014.

Here we have one of the most dominant sports car racers ever produced, swathed in one of the most iconic liveries and owned by a man with a clear understanding of maintaining its on-track duty. We’ll drink to that!

Sidebar: The Greatest of All Time

With all due respect to Audi’s R18 e-tron quattro—and, of course, Porsche’s latest and greatest 919 Hybrid—the 962 is the pinnacle of the sports racing prototype. The 962 is a Rolex timepiece encased in Waterford crystal. It’s Michelangelo’s David draped in Brioni. It’s where your mind immediately goes when you think of a prototype, transcending both era and classification.

The Eighties were the halcyon days of prototype racing. These cars were celebrated domestically with IMSA’s Grand Touring Prototypes (GTP) and internationally via the FIA’s Group C beasts. In a field full of prototype sports cars from the world’s leading manufacturers, Porsche’s 956—which served as the foundation for the 962—was the top performer in its class. It went on to win the World Sports Car (WSC) title each year from 1982 to 1986.

The 956’s unparalleled record of results, as well as some safety concerns, prompted IMSA to ban the car from entry in its Camel GTP series. One reason was that the 956 placed the driver’s pedal box ahead of the front axle, albeit ever so slightly (ankles, feet and toes made for a poor crumple zone). Secondly, the twin K27 turbochargers on the 2.65-liter, water-cooled flat six were also verboten per IMSA’s regulations, but remained legal in Europe. From the ashes of this condemnation, Porsche developed the 962 as an evolution of the 956.

The 962 addressed these regulatory challenges with an air-cooled 2.8-liter engine mated to a Kühnle, Kopp and Kausch K36 turbocharger and a longer 109.1-inch wheelbase. The additional space created a superior safety cell and made for a more forward-facing, coiled stance.

It didn’t take long for the 962 to come to pass. Porsche approved work to begin on its 956 successor in October 1983. Less than four months later, on February 4th, 1984, Mario and Michael Andretti put chassis number 962-001 on pole for the 24 Hours of Daytona.

That edition of the twice around the clock classic marked the only time Porsche fielded a works 962 at Daytona. This may seem startling until you realize that, according to PMNA, of the 92 complete 962s Porsche produced, only 16 were campaigned by the factory, while the remaining 75 went to customer teams around the globe.

These customers proved to be a competitive bunch, helping Porsche chalk up multiple wins at Le Mans, Daytona and Sebring. Between the 956 and 962, Porsche captured 40 World Sports Car wins. The 962 alone took 54 victories in IMSA’s GTP class. The 962’s domination was truly world class, extending its winning grasp onto the European Interserie Championship, Germany’s Supercup and the All-Japan Sports Prototype Championship. Over the decade following its introduction, the 962 established itself as the most successful sports racing prototype ever. 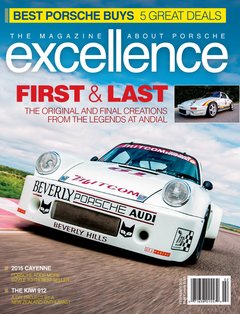