Erasing a bad memory with a custom Turbo 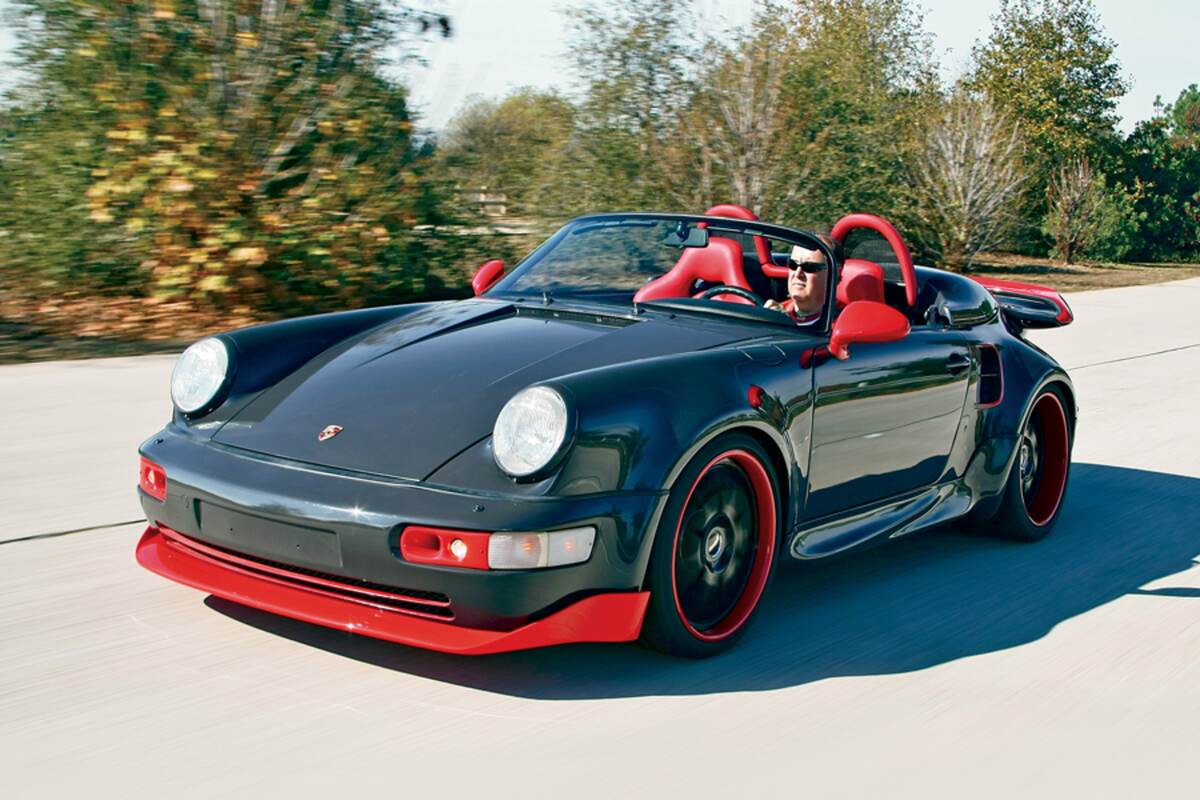 Reliving one’s misspent youth is a typical ironic British phrase, and it perfectly describes what some car enthusiasts experience as they motor along the long and winding road of sports-car ownership.

While the lucky ones end up with their dream machines, others might be inspired by long and lingering memories of cars that they or a relative owned many years before. For them, those rose-tinted memories sometimes lead them back to their youth later in life.

Quite often those who reach the end of that path discover to their chagrin that the journey itself was more enjoyable than finally arriving. The reality of owning an old car, one that can leave oil on the garage floor and does not always start on the button, can overwhelm someone with a stressful job and family in tow. On the other hand, as a temporary escape from the rat race, fixing up an old car can be therapeutic in itself.

This, however, is the story of a man who was lucky enough to start with his dream car back in 1989. Now, over two decades later, he has ended up with a similar machine, but on steroids. A very private person who kindly agreed to have the story of his car told on condition that we only use his first name, Bobby explained that he owned an original 1989 black-on-black 911 Speedster when they were new. The car was his most precious possession at the time and was even kept under a car cover in the garage. 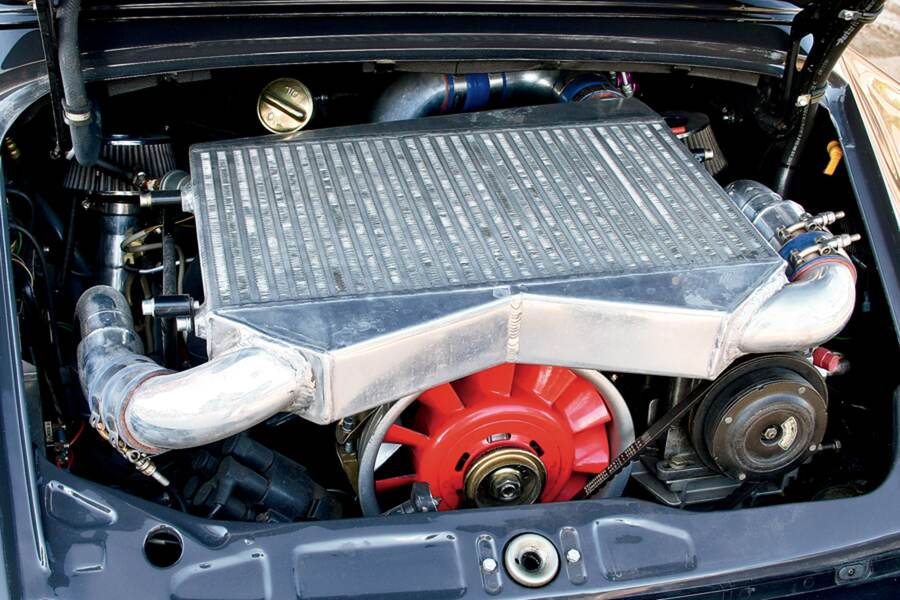 However, this was the era when thieves noticed that coveted marques like Porsche and Ferrari were reaching sky-high resale prices, and Bobby’s car went missing one day, never to be seen again.

Marriage, family, and building up his business put the idea of replacing the Porsche on hold, and it was not until 2009, two decades later, that Bobby was ready to look for another Speedster.

In the interim, Bobby’s tastes had evolved, and with thoughts of more horsepower, uprated suspension and bigger brakes under a car with some of the styling cues from later Porsche models, buying an expensive collector-status ’89 Speedster to use as the base car was definitely off the table.

Bobby’s search led him to a nice example of the less rare, but still valuable, 1989 Turbo Cabriolet. Coincidentally this car was black-on-black, just like his original Speedster. From there, the road map to his ultimate Speedster was laid out over the course of the next five years. 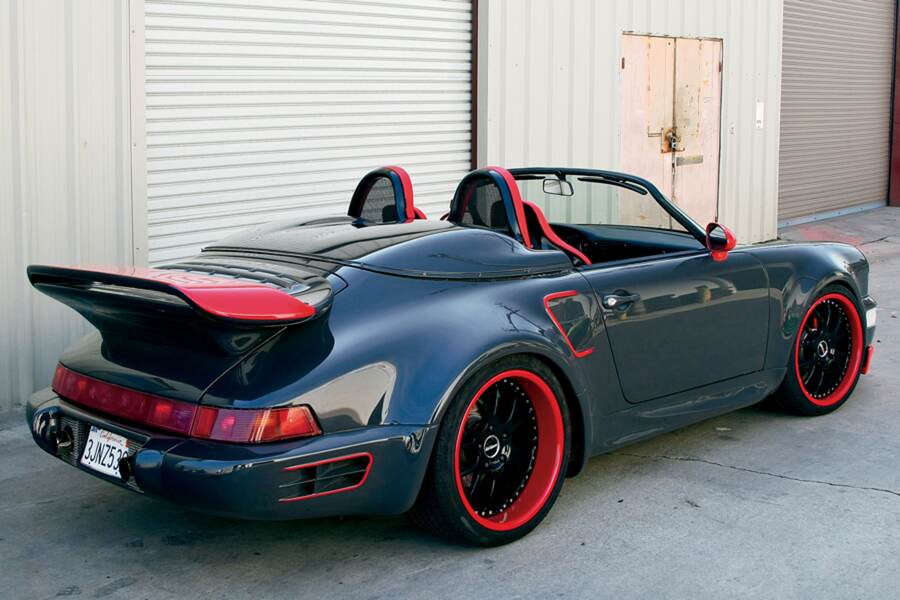 He contacted Dave Bouzaglou at TRE Motorsports in Van Nuys, California, who set out the mechanical specification for the car. Dave agreed to manage the project in conjunction with a small handful of trusted local specialists for the custom bodywork, paint and interior trim.

The heart of any car is its motor, and Bobby and Dave even discussed swapping out this one’s for a later 3.6 biturbo. In the end Bobby went for Dave’s suggestion to take the original motor’s displacement out to 3.4 liters and fit twin turbochargers as part of a full engine rebuild that would also be the safety check for many more years of faithful service.

The displacement bump comes from a set of 98mm JE pistons married to the factory crank and rods, with all the reciprocating parts checked for wear and balanced as a matter of course.

To improve breathing and optimize gas flow, the cylinder heads were swapped for 3.2 Carrera units, which have larger ports to start with. Some machining work was done to further improve flow, and a pair of high-lift camshafts with matching valve springs was installed. 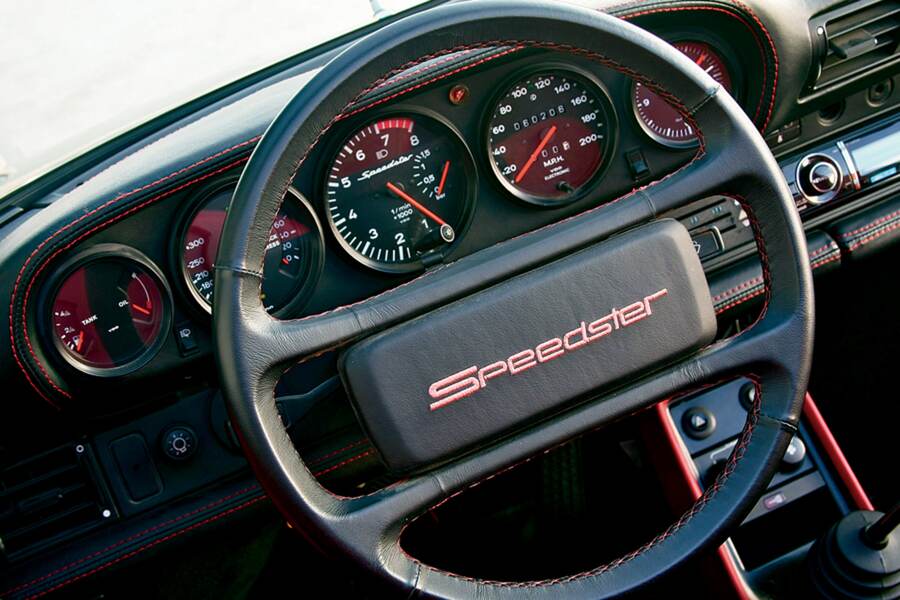 One of the great things about the air-cooled Porsche flat-six is the vast interchangeability of parts. With its enlarged displacement and twin turbos, the engine needed a much deeper breathing intake and exhaust, so Dave ditched the Turbo’s original Bosch K-Jetronic CIS setup and the stock exhaust.

A gas-flowed Carrera 3.2 intake manifold and enlarged throttle body, working in conjunction with a custom Promotive ECU and fuel pressure regulator, now looks after the intake side of the combustion process.

With 3.4 liters, an 8.5:1 compression ratio, and a pair of modified 993 turbochargers to cope with, the 993 Turbo exhaust headers were the right size to get the spent gases out efficiently. These were duly bolted on and matched to an Axiom Motorsports custom tubing and heavy-duty top-mounted intercooler system.

Finally, and taking into account the limited space between the bodywork and engine, a custom polished stainless double muffler was fabricated to work with the twin-turbo installation. 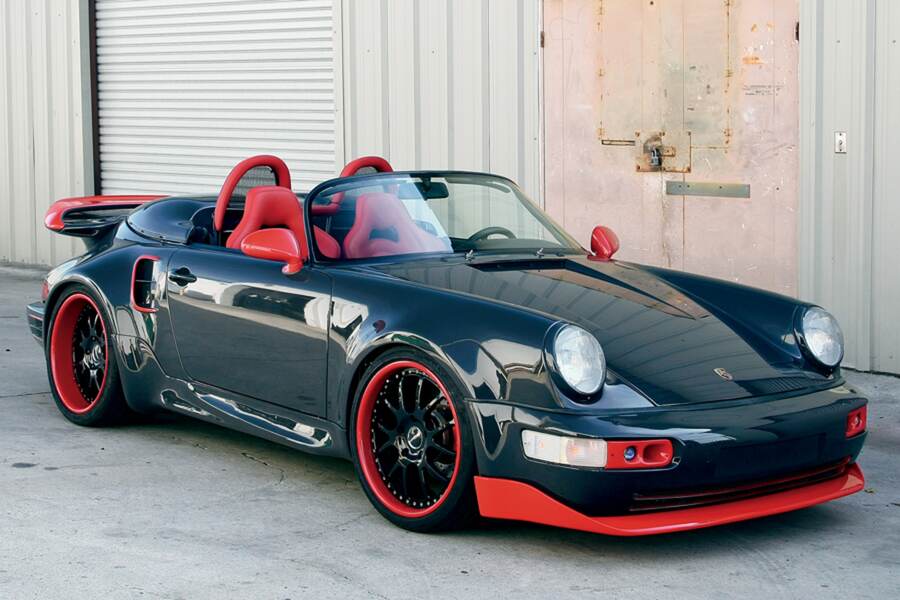 On the dyno the motor showed a healthy 545 bhp, with 430 lb-ft of torque. These modern levels of 911 Turbo power in the relatively light ’89 car translates into the kind of speeds that are wide-eyed scary when you are peering through, or even over, the short Speedster windscreen.

The stock G50/50 transmission with limited slip differential is one of the most robust boxes in Porsche’s arsenal, so all that was needed here was a general freshening up to cope with the additional horses.

Up front an over-sized center-mount-ed oil cooler was installed, running in series with the stock fender oil cooler. Due to the twin-turbo installation taking up most of the space in the right rear wheelwell area, a 964 Carrera oil tank was placed in front of the rear wheel on that side.

The suspension mods consist of 22mm torsion bars in front and Bilstein RSR coilovers at the rear, with damper valving calibrated to the torsion bars and 400-lb rear springs. Fine-tuning is done by Tarett Engineering’s adjustable front and rear anti-roll bars. 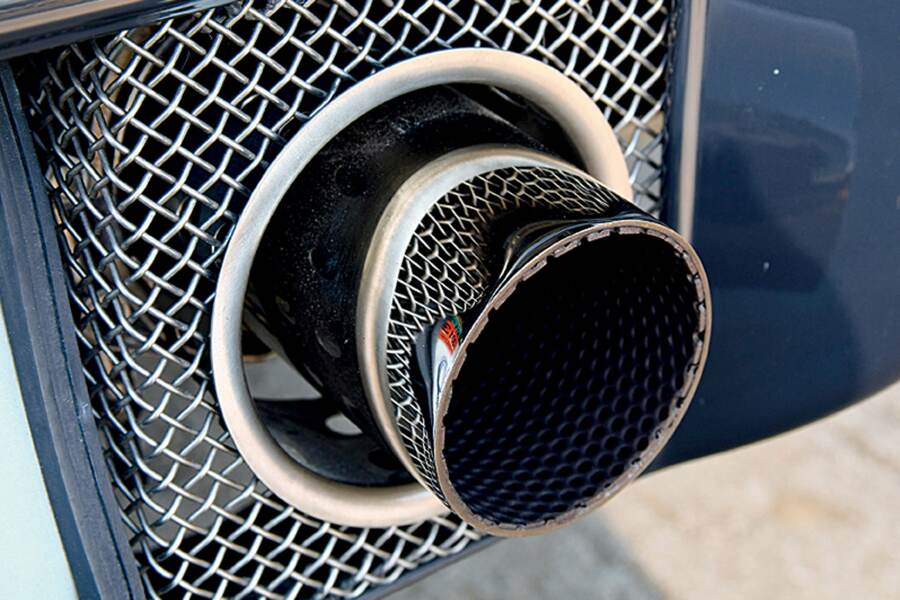 A huge array of wheels is available for 911s these days, but Bobby’s choice of footwear was governed by diameter, width and offset, as well as the correct period look. In the end, Forgeline’s 9.0J- and 11.0Jx19-in. three-piece forged alloy wheels, shod with Michelin Sport rubber, 235/35ZR19 and 295/30ZR19, came out tops. Apart from meeting all of the above criteria, they also help to reduce unsprung weight.

You can just see the big brakes behind the black-painted cross-spokes of the wheels. The front discs and calipers are the big reds from the 993 Turbo, with 930 rear discs clamped by 930 Turbo front calipers to help maintain the correct front-rear brake balance.

While Dave was building up the engine and gearbox, the bodyshell was sent over to Axiom Motorsports in Inglewood to undergo its own renaissance with a makeover inspired by several later Porsche models.

Starting at the nose, the car lost its impact bumpers in favor of a factory 965 Turbo bumper fitted with TRE’s GT2-style lower valence/spoiler and integrated brake duct/spot lamp kit. The side sill panels are a mix of 996 GT3 and 965 Turbo, and 965 Turbo rear lights, center reflector and door mirrors were fitted to complete the updated factory look. The rear quarter panel intake scoops grafted into the metalwork of the rear arches are not there for show. They feed cooling air to the extra air-con condenser on the driver’s side and to the oil tank on the passenger’s side. 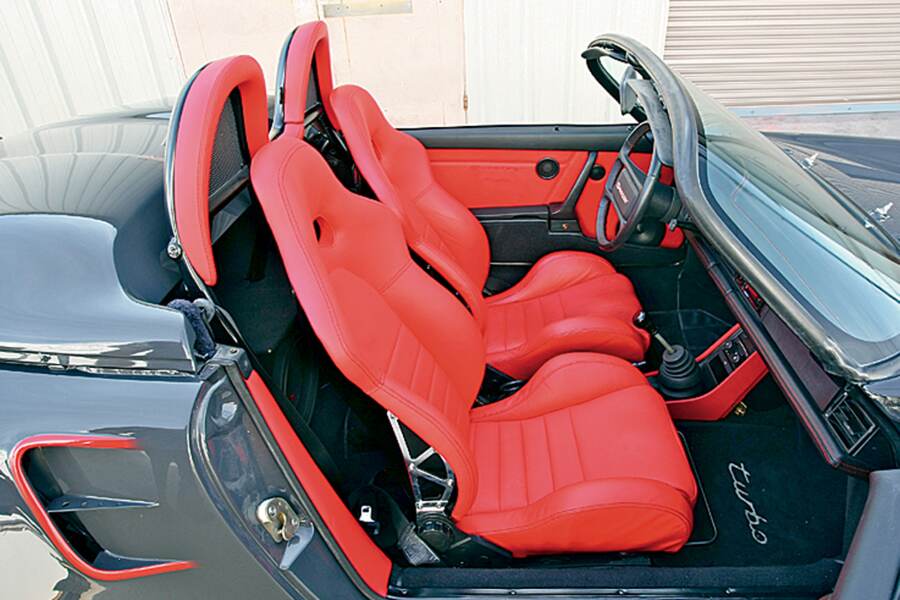 Under the shadow of Getty Design’s 993 Turbo S-style rear spoiler, the center section of the 965 Turbo rear bumper was modified to incorporate a bespoke mesh grille with GT1-inspired outlets for the two big polished exhausts—an obvious hint there is a very powerful motor feeding them. Finally, extra heat extraction vents for the engine bay were cut into the sides of the rear bumper.

A complete factory Speedster parts “kit” was sourced from L.A. Dismantlers and installed on the car. This consists of a 1989 Speedster windscreen, ragtop hood with operating mechanism, rear deck hardcover, doors and side windows. A Boxster donated its roll-over bar assembly, suitably modified to fit the 911 chassis and allow operation of the low-profile ragtop.

The gray paintwork was inspired by the 997 GT3 RS 3.8, with red accents on the front and rear spoilers, brake ducts, side air intakes, roll-over hoops, door mirrors and wheel rims.

The interior of the car is just as much a one-off and boasts custom-made door panels with contrasting color stitching in black. Red stitching highlights the shape of the dashboard and steering wheel rim, while the seats were re-contoured and re-trimmed in Can Can Red leather. Other details that enhance the car’s bespoke status are the embroidered Speedster and Turbo lettering on the door cards and the Speedster word embossed into the leather of the steering wheel crash pad.

The instrument gauges were converted to LED lighting and custom-faced by North Hollywood Speedometer, with “Speedster” appearing on the rev counter. A 1000-watt stereo system with a custom subwoofer installation delivers the music when Bobby is not busy listening to the scream of the tuned flat-six.

In 2012, while the car was undergoing final assembly at TRE, Bobby and his family moved to Dubai to pursue new business interests. While the climate there is very pleasant from November to March, it starts to get very hot after that, with temperatures soaring to well over 100 degrees in July and August and high humidity the norm.

To cope with this unfriendly environment, the air conditioning system was uprated with a custom over-sized condenser installed in front of the left rear wheel—the big intercooler unit left no room in the engine bay. High capacity fans blow the freezing air into the cabin.

Bobby is now happily driving his one-off Speedster Turbo around Dubai, and the good news is that it is most unlikely to be stolen there. Apparently, in some parts of the Middle East, when thieves are caught they quite often end up having s hand cut off. Seems drastic, but Bobby likely isn’t going to lose this Speedster. 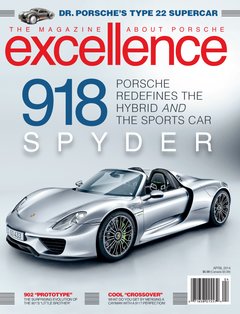