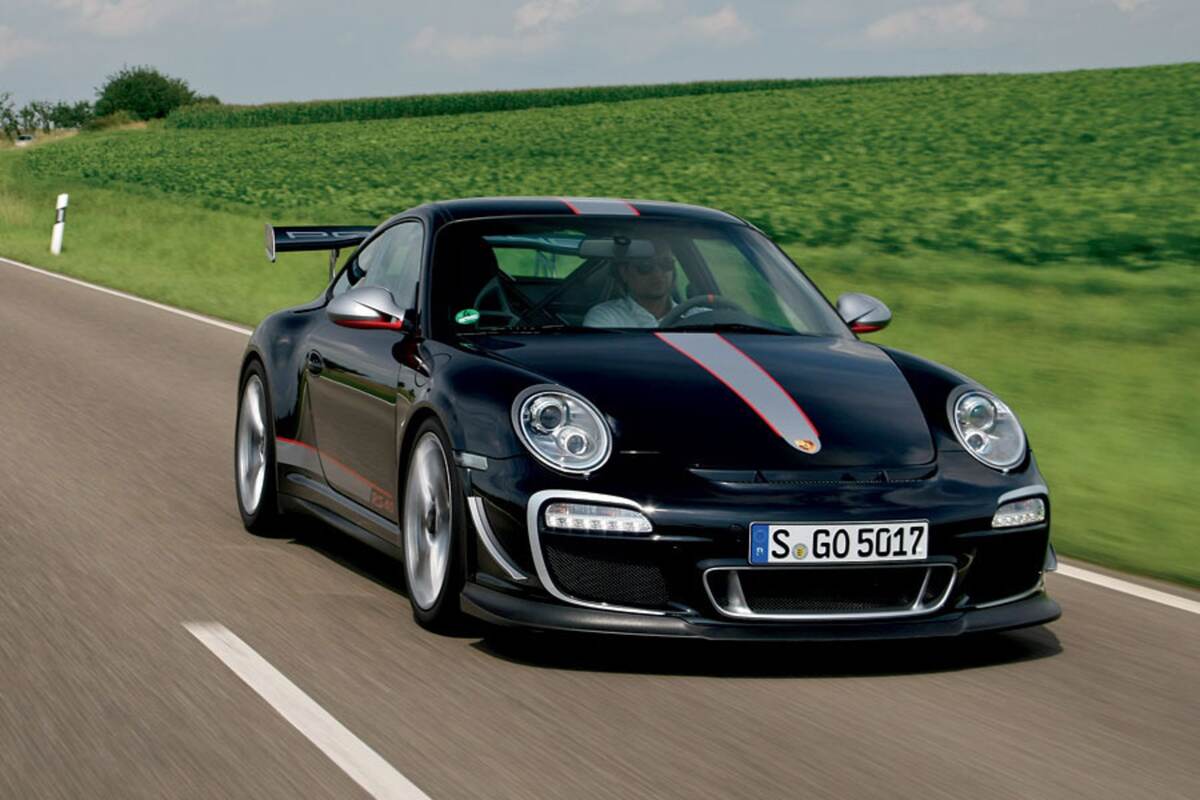 Six seconds is about the time it takes the average person to read a long sentence, or savor a sip of a favorite drink. On a race track, where a split second can be the difference between winning and coming second, six seconds is an eternity.

Putting space between the GT3 RS 4.0 and these other legendary Porsches is no mean feat, especially as the RS 3.8 is one of the fastest Porsches ever. To learn more about the car that brings the 997 series to a close on a very high note, I drove the RS 4.0 extensively and spent time with its creator, Andreas Preuninger, the head of Porsche’s GT and RS model development at Weissach.

You may be surprised to learn that the GT3 4.0 was not officially planned,” begins Preuninger. “My team likes to play with ideas, and after we proved that our 4.0-liter RSR race engine was bulletproof in the heat of competition, some of the engineers were determined to try a similar capacity motor in a street car. The test results were so impressive we ran the idea of a 997 ‘last hurrah’ RS 4.0 limited edition past the Board and they signed it off.” 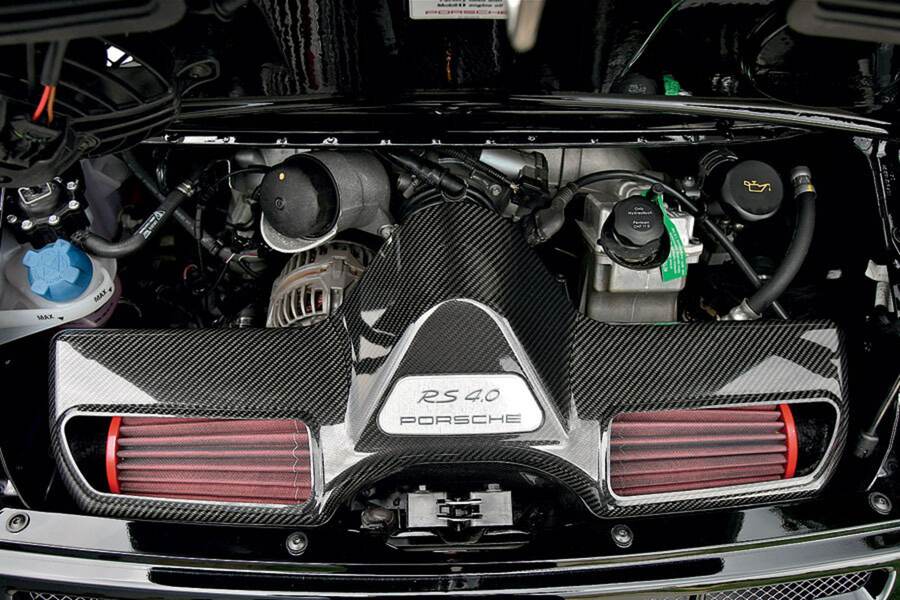 The Board must be pleased with the market’s response: “The 600 4.0-liter cars were sold out in just 14 days,” says Preu­ninger. “In addition, we built six development cars and six pre-production cars, making a total of 12. The dashboard plaques on the six pre-production cars all read 000/600, and one of these will end up in the Porsche Museum.”

Incidentally, Preuninger says Porsche has built 2,500 examples of the 997-2 GT3 and 2,000 copies of the 997-2 GT3 RS. So as the curtain drops, the 2010–2011 GT3 leaves the stage with some 5,100 units sold, an impressive figure for such a specialist model — especially considering the economic climate throughout its lifespan.

The goal from the outset was 500 hp, and Prueninger’s team evaluated every part of the 3.8-liter GT3 RS flat six to get there. With the decision to increase displacement came the option of increasing the compression ratio. “We played with ratios as high as 13.0:1,” ad­mits Preu­ninger. “How­ever, we encountered some detonation at this level, so we settled on 12.6:1, up from the 3.8’s 12.2:1.” 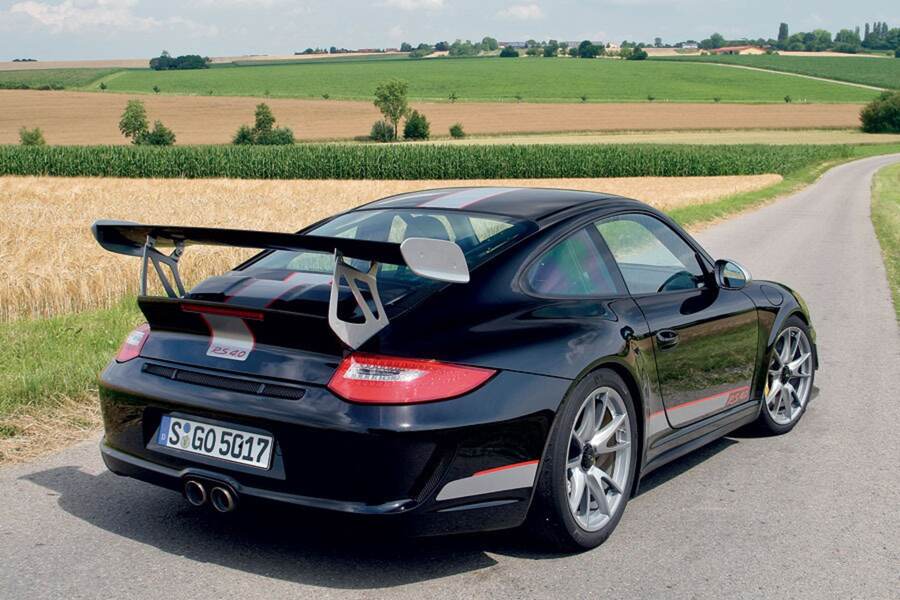 Bore remains unchanged at 102.4 mm, so the displacement bump is down to an increase in stroke from 76.4 to 80.4 mm. This was achieved by using the full-race GT3 RSR’s crankshaft and shortened titanium connecting rods married to the RS 3.8’s Mahle pistons. The rods are strengthened to withstand the greater angular thrust velocity created by their 2.1-mm length reduction to 127.9 mm.

“A long stroke is never good for high revs, and we had to maintain the engine’s ability to rev and not go flat when at 8000 rpm,” explains Prueninger, who says the camshafts and valve timing were altered in addition to much more. “We revised the design of the whole intake system, from the point where air enters the in­takes all the way to the combustion chambers.

“During this review, we found that the 3.8 air-filter system worked up to 475 horsepower and then ran into a brick wall,” he continues. “We even looked at a special airbox we were testing for the GT3 R Hybrid race car and found we could gain 10- to 12-percent air volume from this alone. In the end, we went for a larger-volume, hand-laid carbon-fiber airbox housing a pair of high-flow conical air filters.

The next bottleneck the team ran into was the intake plenum system, which could not use all the air that was now being directed to it. “We invested in a new lightweight, cast-alloy plenum and intake-runner system with thinner walls, which also saved 400 grams,” explains Preuninger. “Nor­mally you gain power and revs with shorter intake runners, but you also lose torque. In this instance, using ten millimeter shorter intake runners with a five millimeter increase in diameter, we managed to find a gain in flow velocity. However, anything outside that ideal ratio decreases airflow, resulting in a loss of power.” 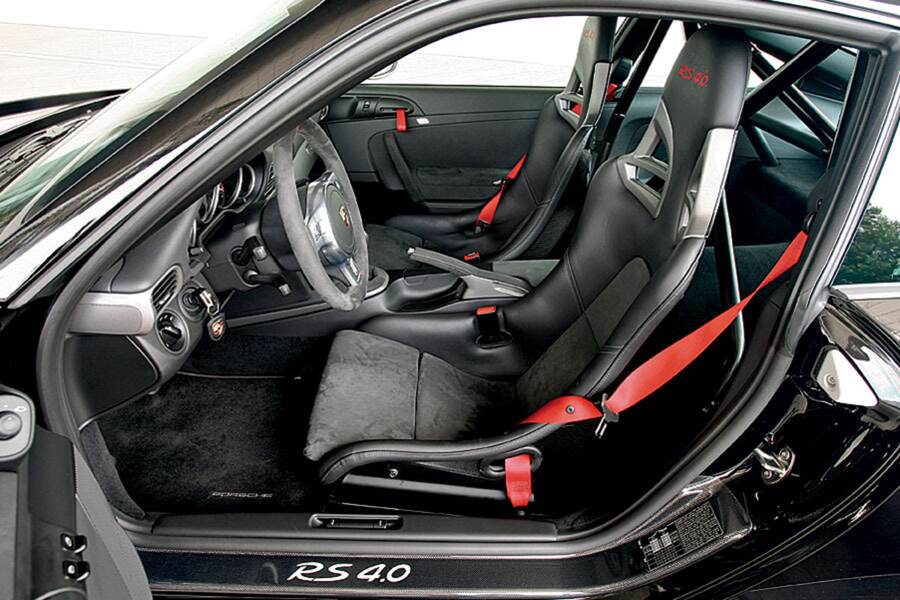 The RS 3.8’s exhaust system proved to have excessive back pressure when bench-tested with the larger motor. “The catalytic converter is normally the biggest bottleneck in a production exhaust system,” says Preuninger. “It is always a balancing act between efficiency and emissions, and we reached our target by reducing the cell count from 400 to 300 and using a new special coating to help meet the cold-start emissions benchmark.” The new exhaust system, which uses a titanium rear silencer, is made by Ricardo’s German branch.

The extra torque and high-revving capability of the 4.0-liter motor put more stress on many associated components, so the chain tensioners were beefed up and the camshaft adjuster is now fitted with surface-hardened 14.9-grade (DIN) bolts to cope with the higher loadings. Due to the added stress on the clutch, the pressure plate is now mated to its backing components using high-strength steel bolts rather than rivets.

“The turbocharged GT2 RS is heavier at the rear, so the springs and dampers are different,” says Preuninger. “The main and helper springs for this car are painted yellow, with red ones for the normally-aspirated GT3 RS 3.8 and 4.0.” The rates on the RS 4.0 are higher than those on the 3.8, but lower than those on the GT2 RS. 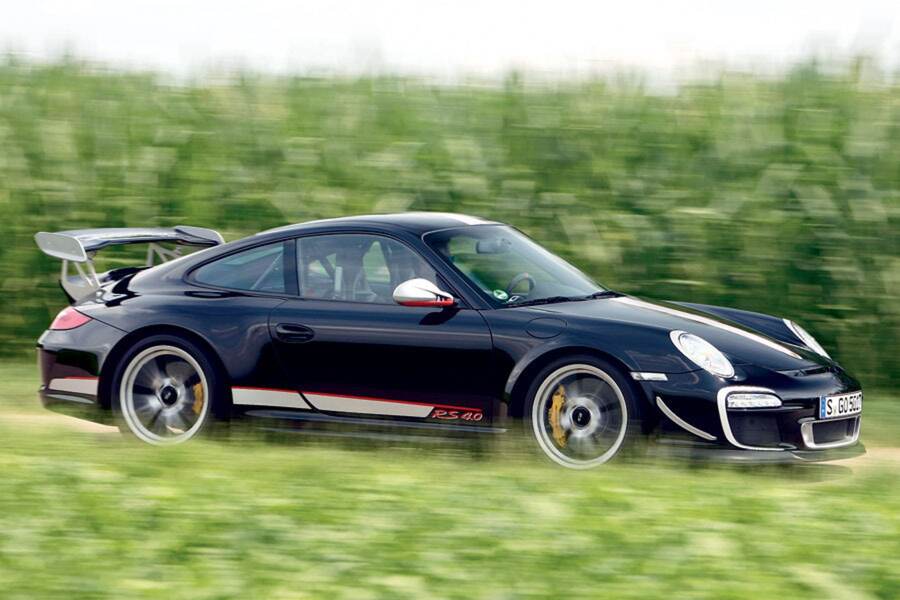 “All of the rear suspension lower arms and links are Rose-jointed for sharper and more accurate response,” says Preuninger. “This faster-reacting rear end is closely linked to the improved aerodynamics of the 4.0. Working in partnership, they produce the fine balance we were after."

Beyond the busy 4.0 decal set, the only external differences between RS 3.8 and RS 4.0 are the distinctive dive planes on the sides of the front bumper and the new side plates on the rear wing. But there is another tweak your eyes will struggle to catch: “We increased the rear wing’s angle of attack from 6.8° to 9.0°, and the dive planes in front balance this out,” explains Preuninger. “We now have 195 kilograms (430 pounds) of total downforce at 310 km/h (193 mph), which makes the car noticeably more stable at high speeds.”

More revealing than the total downforce is how it is distributed across the chassis: 82 pounds up front and 348 at the rear. “This is 10-percent more than the 3.8 at the rear, and proportionately the same as before in front,” says Preuninger. “On the Nürburgring, long, fast corners can now be taken flat out due to the more planted front end. The dive planes are smaller versions of the ones on the RSR. We even tried the race ones, but found that these can make the car feel edgy. The RSR has a larger rear wing to balance things out, but this is too big for road use.

“The improved aerodynamics and the alterations to the elastokinematics of the chassis caused by the Rose-jointing required some fine tuning of the geometry,” says Preuninger. “We increased the negative camber by exactly 0° 05’ on both axles, so the front now has 1° 40’, with 1° 50’ at the rear. In combination with the solid lower bushings and the extra downforce, you can really feel the im­provement in fast bends.” 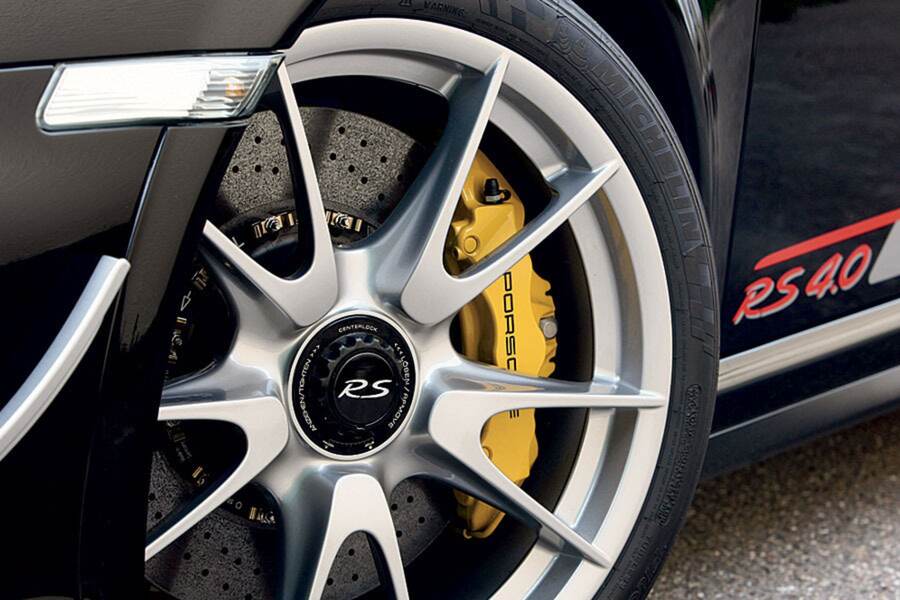 Due to weight discrepancies encountered in the past between Porsche’s stated curb weights and test cars we’ve put on the scales, we were curious about how Porsche measures its cars. “The dry weight of the RS 4.0 is 1,270 kilograms (2,800 pounds),” says Preuninger. “To that we add 45 kilograms for fuel, 30 kilograms for coolant, 10 kilograms for oil, and five kilograms for windscreen washer fluid. Thus, our official curb weight is 1,360 kilograms (2,998 pounds) — in the lightest specification that a customer can order the car.”

That means most GT3 RS 4.0s will still be on the wrong side of 3,000 pounds, but Preuninger is quick to point out the GT3 RSR — an all-out race car — isn’t much lighter. “The RSR is about eight percent lighter than the RS 4.0,” he says. “Including fuel and the 25-kilogram penalty ballast it has to carry this season, it weighs 1,245 kilograms (2,745 pounds). The dry weight for the race car includes fluids but no fuel, so if you subtract the fluids and ballast again, you end up with a dry weight of around 1170 kilograms (2,579 pounds), compared to the 1,270 kilograms (2,800 pounds) of the street car.”

Preuninger says that cost eventually imposes a limit to weight paring: “If we used carbon-fiber rear fenders and had to go through all the safety testing, the integration process in the production line, and then take quality and homo­logation into account, these fenders would end up costing 15,000 euros each — just to save a few kilos. So we enter an area of diminishing returns for a lot of extra cost.”

He says the RS 4.0 saves 22 pounds over the RS 3.8 with lightweight parts such as lighter coil springs, polycarbonate front fenders, Plexiglas rear side windows, carpeting that has had its backing shaved off, and rear underbody diagonal bracing struts in alloy rather than steel. As with the GT2 RS, the front luggage compartment lid is carbon fiber, but the piece is lighter on the 4.0 due to the painted finish, which is lighter than the finish coating required for flaunting smooth “bare” carbon fiber.

“Naturally, there was a lot of back-to-back evaluation with the 3.8, which was our benchmark,” concedes Preuninger. “As well as the expected track work, we did a lot of testing on the autobahn and normal roads in real-world conditions to see exactly the difference between the cars as the customer would perceive them.”

While the differences between the RS 4.0 and the RS 3.8 are immediately clear if you drive them back to back, they are harder to quantify if you drive them in isolation — especially if significant time has passed in between your drives. In the 4.0, the seat of your pants picks up on an extra degree of precision in the steering and chassis. Where the 3.8 handles as near perfect as you could want a street-legal 911 to, the 4.0 surprises with a fraction more grip and finesse that just gives it the edge.

The changes made in the flat six’s evolution to 4.0 liters offer slightly sharper throttle response backed up by noticeably more torque in any given situation. Where the 3.8 motor is gutsy, the 4.0 feels even more muscular. The critical (for road use) 2000–3000-rpm range is where the 4.0 is discernably better than the 3.8. When you aren’t in a big hurry, one gear higher than usual is the norm.

But the RS 3.8 is already so responsive, torquey, and rev happy — and it’s already so blindingly fast and well balanced that if you already own one and never get the chance to drive one of the 600 4.0-liter cars, you won’t be missing out. As good as the 911 GT3 RS 4.0 is, my previous conclusion still stands: I would be perfectly happy to drive an RS 3.8 — even after the applause has ended. 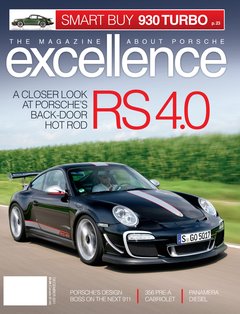