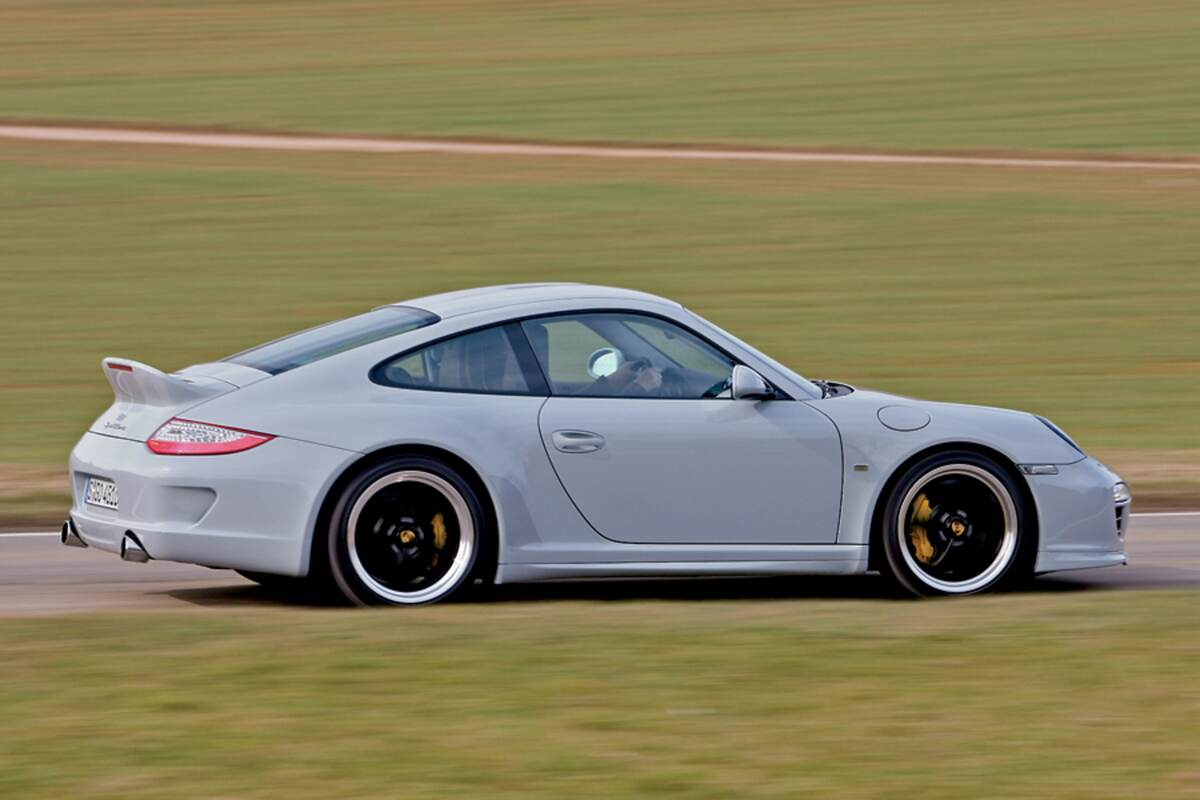 On the face of it, the new 911 Sport Classic doesn’t make a whole lot of sense. Customers in Por­sche’s largest market can’t buy it. It’s got a double-bubble roof, something associated with Zagato rather than Porsche. Its wheels ape Fuchs’ famous 911 alloys, but have too-shiny surfaces and aren’t made by Fuchs. Finally, anyone can order a new Carrera S with the same mechanicals (Powerkit 3.8, PCCB brakes, PASM Sport suspension) for half the money.

Yet, during a worldwide recession, all 250 cars offered were quickly spoken for. This suggests that Porsches are bought for more than just performance, that some buyers are also looking for something different. And, in fact, Porsche has been building tailor-made cars for such clients for a long time, through a specialist department originally known as Sonderwunsch (Special Wishes).

Have you ever really, really loved a pair of shoes? Well, Sonderwunsch, found in Zuf­fen­hausen’s Werke 1, would happily paint your Porsche to match their color, then wrap every piece of its interior in their leather. As you’d imagine from this example, oddities abounded: A 996 with a baby blue cockpit, a 959 with an under-dash drawer for an Uzi, and a 930 with leather gauge faces and a convertible top that closed itself if it started to rain while the car was parked are but three examples. 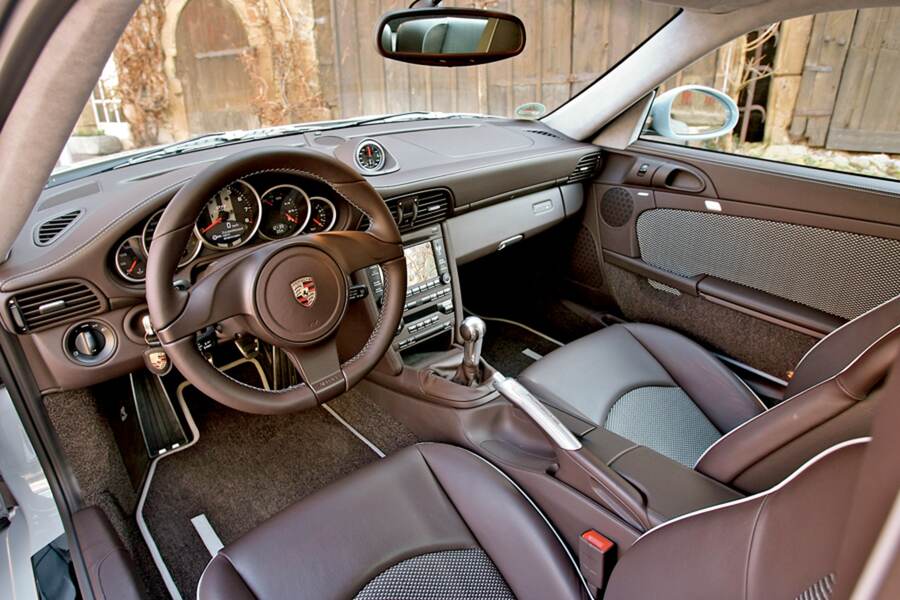 Sonderwunsch evolved as Porsche did, eventually taking the name it bears today: Porsche Exclusive. It would be a mistake to think the department is limited to custom-tailoring, however. It also quietly develops production parts, from wheels to Powerkits to aerodynamic aids — many of which become regular options or basic ingredients for “S” or special production models.

The Sport Classic is meant to demonstrate the full capabilities of Exclusive. While the car is based on the mechanicals of the current Carrera S, its wider rear fenders come from the Carrera 4 and give it a wider rear track and a more purposeful stance. While the fatter fenders were in the parts bin, the rest of the body alterations had to be created with production in mind, meeting not only Por­sche’s requirements but those of governmental agencies. Thus, the sculpted front spoiler, side sills, revised rear bumper, fixed ducktail spoiler, and double-bubble roof section were all wind-tunnel and TüV tested.

While the ducktail is a clear reference to 1973’s 911 Carrera RS 2.7, the paint is an early 356 gray that faded from Porsche’s color charts. Now called Sport Classic Grey, it’s offset by medium gray stripes over the hood, roof, and ducktail. These disappoint by being self-adhesive rather than painted, and one wonders if they’ll be deleted on some Sport Clas­sics for differentiation — because all 250 cars will have the same colors and equipment. (The sole option is a short-shifter.) 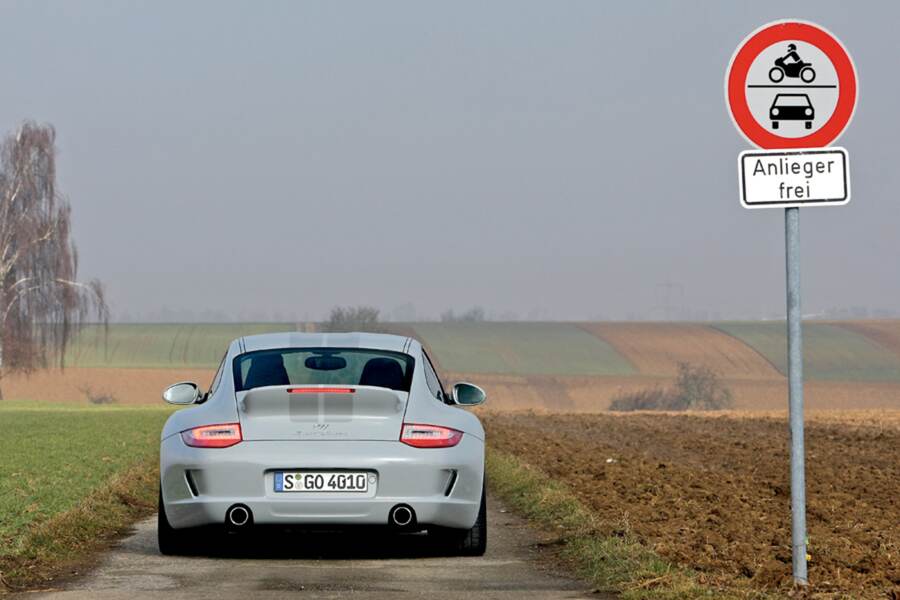 About those colors: Art teachers tell students to avoid mixing cool hues like blue and gray with warm ones like beige and brown, a rule the Sport Classic ignores. Yet the more you look at its color combination, the more it grows on you. The gray exterior warms with the late-afternoon sun, while the interior’s brown leather is deep and rich. Brown interiors are very 1970s, but the most perplexing thing about the color Porsche’s design department chose is its marketing-speak name: Expresso Nature, which means precisely nothing in any language.

Odd lingo aside, there’s no getting away from the fact that the Sport Classic has the most lavish, finely detailed interior seen on a production Porsche. The material found on the door panels and the seats’ center sections recalls Berber fabric used in 911s of the 1970s. Closer inspection reveals an intricate pattern

of finely woven leather and yarn that’s pleasing to eye and fingertip alike. Sonderwunsch has long been known for its ability to cut leather so thinly that it can cover plastic air vents and still fit them into their dashboard receptacles, an art that continues here. 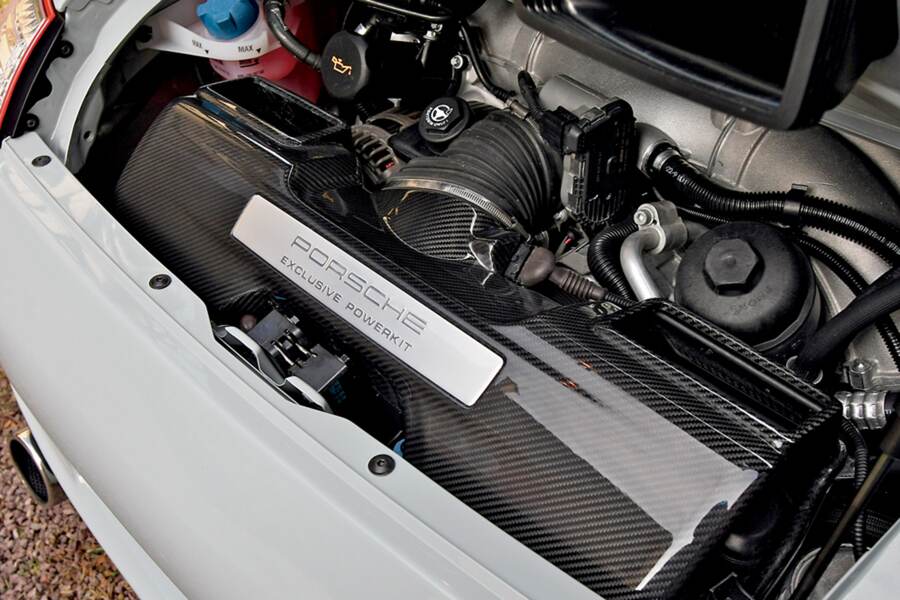 More details abound. Intricate cross-stitching on the steering wheel is match­ed by a similar level of detail on the key pouch and cover for the owner’s handbooks. Twin gray stripes on the tachometer echo the theme started on the bodywork, and are matched by gray seatbelts and a gray Alcantara headliner. Polished stainless-steel doorsills feature the Sport Classic script illuminated in blue. The finishing touch

is a plaque near the glovebox engraved with each car’s standing as one of 250 customer Sport Classics. This test car isn’t one of them, by the way. It’s labeled No. 000/250 and will likely end up in the Porsche Museum.

Moving back outside, the 19-inch alloy wheels are a modern interpretation of Porsche’s first and longest-running alloy road wheel, the basic design of which lasted from 1967 until 1989. Made for Porsche by Fuchs, those five-spoke wheels were known for strength and lightness and came in a variety of finishes — but never with the gloss black spokes and polished lips seen here. Sized 19×8.5 and 19×11 and wearing 235/35ZR19 and 305/30ZR19 tires, the new versions positively dwarf the 14-, 15-, and 16-inch originals. 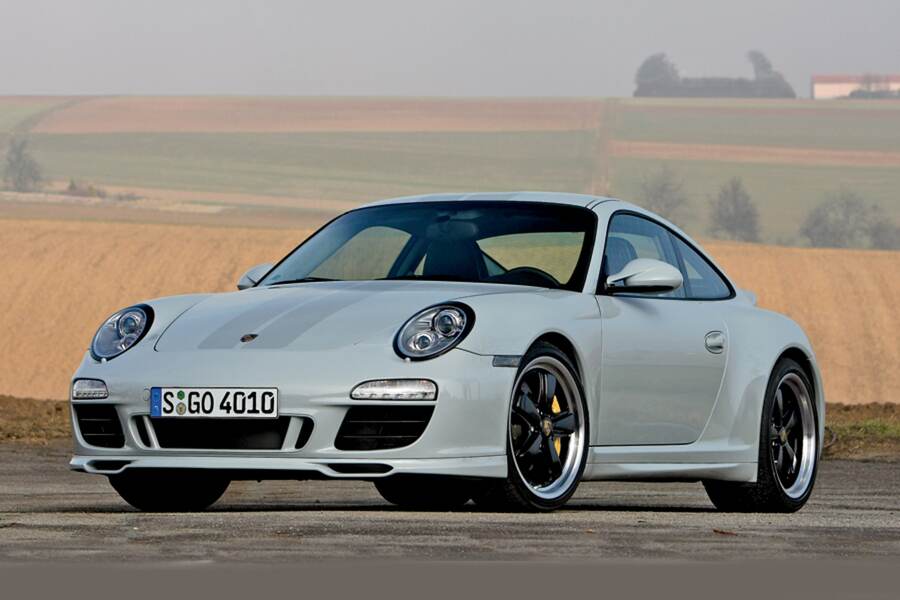 Porsche’s PCCB ceramic-composite brakes are among the best in any car, at any price, and are standard on the Sport Classic. So too is a limited-slip differential, which is part of the car’s electronically variable Sport suspension package. Weis­sach R&D has been on a steep learning curve with Porsche Active Suspension Management since its introduction on 2005 997s, something clearly evidenced by the more refined settings of the second-generation PASM in 2009-on 997s.

The optional Sport suspension found on 2005–08 997s used -20 mm springs and conventional gas-filled dampers, which produced a very stiff ride. The new PASM Sport suspension still lowers the car by 20 mm, but now uses the variable damper technology to yield a near-perfect balance between daily driver comfort and taut handling in the Normal setting with enough body control for track events in the Sport setting.

Porsche gave the Sport Classic its best Carrera-line suspension, brakes, and wheels in preparation for the most powerful 911 Carrera engine to date — the first to claim more than 400 horsepower. The Powerkit 3.8, based on the direct fuel-injec­tion sixes used in 2009-on 997 Carreras, was developed for the Sport Classic, and is now available as an option on Carrera S, Carrera 4S, and Targa 4S models. 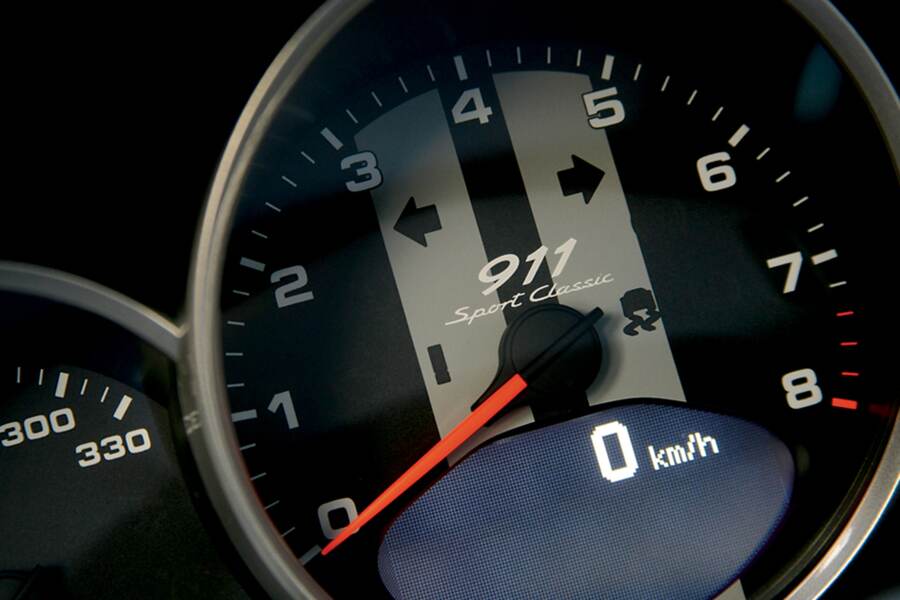 As with Powerkits past, the new one is an extensive upgrade that starts with ported and polished cylinder heads. Balanced combustion chambers are fed by a new variable-resonance in­take manifold, which has six vacuum-controlled flaps that allow it to transition between horsepower and torque-orientated lengths to provide the optimum cylinder charge throughout the rev range. A new exhaust system, a carbon-fiber airbox, and a remapped ECU round out the package.

Out on the road, the Powerkit 3.8 is noticeably stronger than the 3.8 S, and more eager, too. Under full throttle, its deeper lungs let it sing longer and harder to redline. Its signature exhaust note is pitch-perfect all the way from idle to the 7500-rpm cut-out — you can’t help but think this is how all normally-aspirated 911s should sound! Porsche’s engineers say they would have liked to make it even louder — certain markets like Switzer­land have strict noise regulations that dictated otherwise — but this Porsche’s inspiring song suffers little from being a few decibels softer.

Then there’s the rest of the car. After just a few miles, it’s clear that the old saying “a picture is worth a thousand words” really is a cliche. For one thing, pictures fail to convey this car’s presence. More important, neither photos nor the factory press release even remotely begin to convey how this 911 adds up to more than the sum of its parts. The car delights on several levels, the visual and tactile delights of its interior and the way its revised 3.8 engine spins up with such enthusiasm and smoothness being just two of them.

The Sport Classic also stands tall compared to other recent special models. Our drive occurred back-to-back with the 2010 GT3 RS and 2011 Boxster Spy­der, two Porsches that are hard acts to follow. Any of these three are focused enough that even a short drive will bring a wide smile to your face, and all are cars you can lose your heart to rather than merely respect. One, however, stands out as the best all-rounder: the Sport Classic. Where the new GT3 RS is a civilized track toy and the Spyder is a fun sports car, the Sport Classic does everything that a normal Carrera S will, and more.

A look at the car from Por­sche Exclu­sive’s viewpoint helps. Consider this: Since the Cay­enne SUV was launched in 2003, Ger­man tuner TechArt has sold 900 fully modified Cayenne Turbo-based Magnums — this despite the fact other tuners offer modified Cay­ennes and the fact that TechArt’s engine, suspension, body, and interior modifications effectively doubled the list price of a Cayenne Turbo. When one considers that these were aftermarket customs rather than factory limited editions, Porsche AG’s business case for the Sport Classic comes clear.

We’ll leave it to you to decide whether or not the 911 Sport Clas­sic is worth its €169,300 price tag — but it is the best and most complete driver’s Carrera so far. 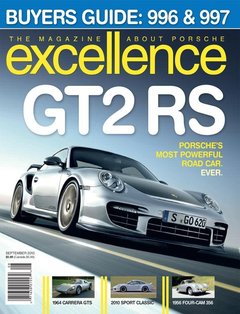