Long before the Cayenne came 1954’s 597 Jagdwagen, an off-roader that Ferry Porsche wanted to sell but couldn’t. Twice. 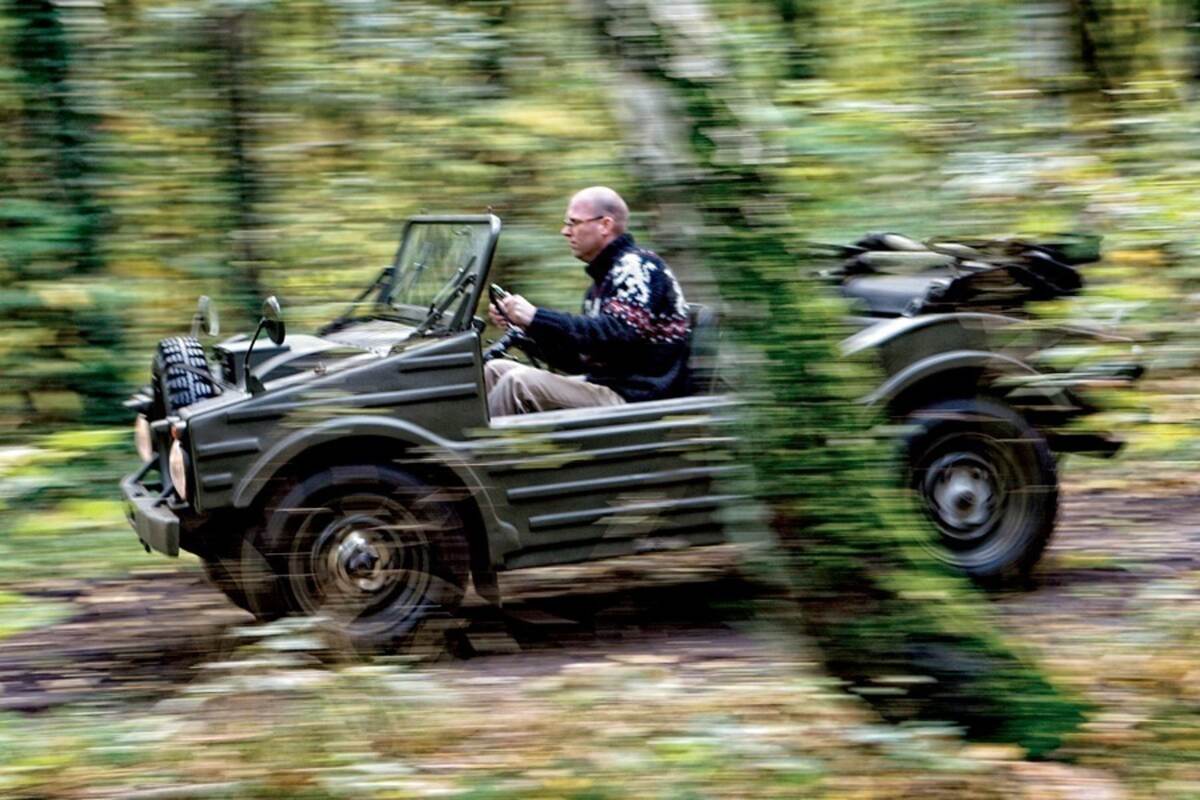 When Porsche launched its Cay­enne in late 2002, the German manufacturer left journalists puzzled and enthusiasts outraged. It was the last thing expected from the celebrated sports-car company, yet there it was: a heavy off-roader of ambiguous design. What were they thinking?

The answer, simply, was survival.

Sports-car sales had long rode economic highs and lows — and Porsche had fallen victim too many times. By the early 1990s, it faced extinction. Noting that people still purchase “normal” cars, even expensive ones, in hard times, Por­sche decided to build a four-door SUV. The resulting Cayenne was both marketed and regarded as a new direction for the manufacturer known for its sports cars, but it wasn’t. Porsche had a rugged off-roader in its history, one that seemed to be deliberately forgotten. 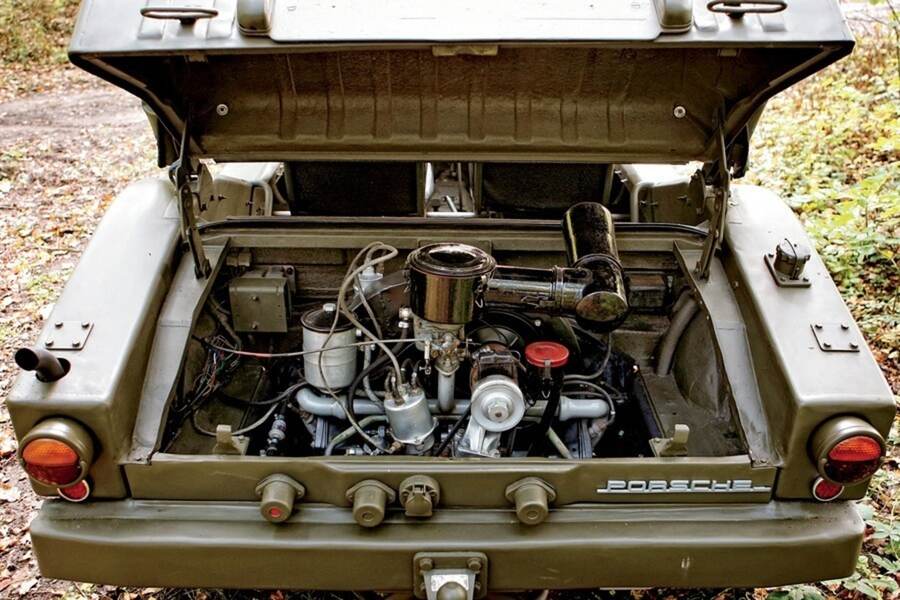 That would be the Porsche 597, just a bit better known as the Jagd­wagen, or, in English, the “Hunting car.” Was this forgotten forebear, with its spartan characteristics, just too far removed from the lavish Cayenne concept? Or perhaps the inevitable link that the 597 had with World War II made it a marketing tool the Germans chose to put aside. Never­theless, it exists.

Like the Touareg-based Cayenne, the 597 is linked to Volkswagen. To uncover its history, you must go back to Por­sche’s roots, which are just as firmly attached to VW as its future looks to be. Before World War II, Ferdinand Por­sche designed the famous Kübel­wagen as Germany’s primary military vehicle. Based on early VW Beetle running gear, it came as an open three-seater, with the fourth seat sacrificed for a machine gun. Although more than 55,000 Kübelwagens were built and used extensively in WWII, their off-road performance was often criticized — not least because they came with conventional rear-wheel drive.

The Kübelwagen was developed into the Schwimmwagen, which added not only the much-wanted four-wheel drive, but amphibious capabilities, too. Another 15,000 of these were built up until 1944. After the war, Germany recovered slowly from the impact of Hitler’s devastating regime and the nation was demilitarized, with any plans for a German army forbidden by Allied regulations. 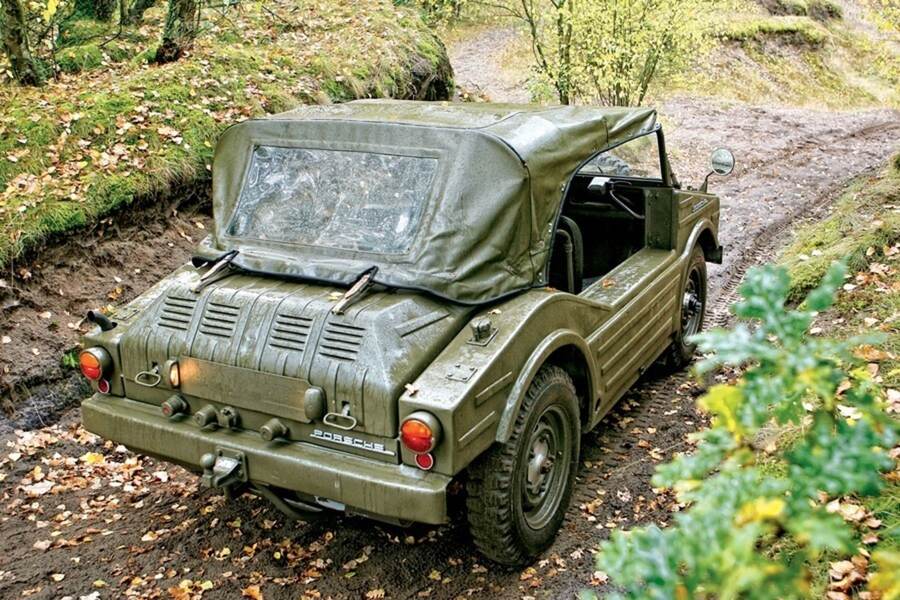 By 1954, however, Germany was ready to fulfill its NATO obligations and assist in the defense of Western Europe. Modern equipment was needed for the newly created Bundeswehr, or Federal Army, and the German government submitted requests for an all-purpose four-wheel-drive, quarter-ton military vehicle. The car had to be simple, rugged, and reliable. Three manufacturers were asked to come up with proposals: Borgward, Auto Union, and Porsche.

Two years earlier, in 1952, Ferdinand Porsche had died and his son Ferry had taken over the company. Ferry’s sporty 356 became a hit and, by 1954, could be had with no less then ten engine variants, ranging from a 40-horse-strong 1100-cc flat four up to a 70-bhp 1500. Armed with his father’s military experience, Ferry combined elements of both the Kübelwagen and Schwimm­wagen for the 597’s design. 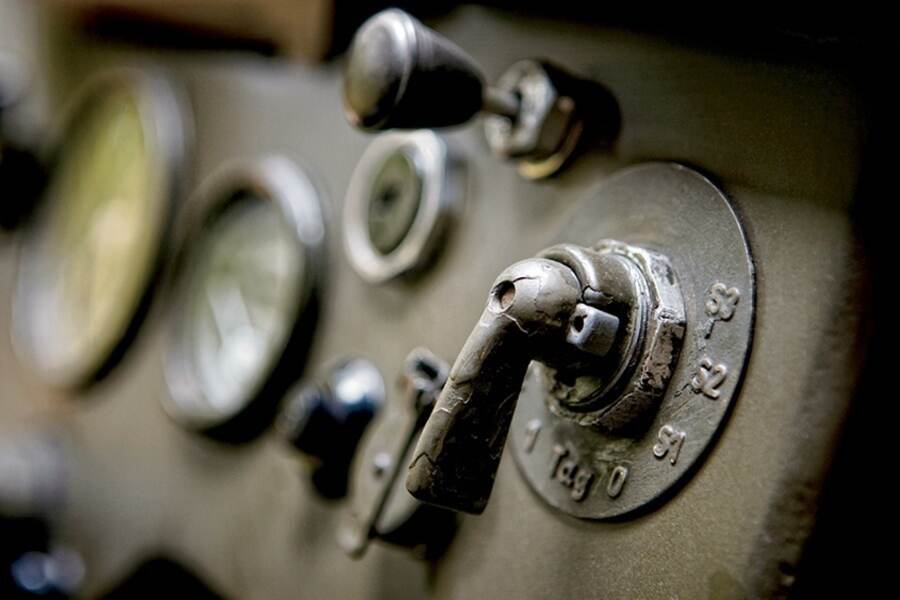 The body was designed by Erwin Komenda, who had helped Ferdi­nand Porsche with his earlier military vehicles. Two prototypes were built without the stamped outer body parts that later production 597s would use to add rigidity. Like the military Volkswagens, the Porsche 597 was a clever car. It had a steel monocoque shell with high sills and no doors, meaning passengers had to climb over them to enter the car. This tub-like body design had advantages, too, as the car could be used in the water.

The first four 597s were fully amphibious, and came with a folding propeller like the Schwimmwagen. Canoe paddles were an option. Even so, it was soon decided the 597 did not need to be amphibious, as it was good enough to ford deep waters and climb steep angles. And, with a slightly redesigned front end and a short wheelbase of only 81.1 inches, the 597 certainly had the ability to do the latter: It could climb grades of up to 65 percent.

It proved to be good in sand, too. An extremely rare factory 597 handbook compares the ground pressure of the Porsche’s tires to a camel’s feet, only to conclude that the Porsche driver is much better off, even when fully packed with four men and their gear! Lights, radios, and other military equipment were powered by two 12-volt batteries that came with standard jump-start connectors, all to comply with NATO standards. Interest­ingly, these cars were built in the special works race department, alongside the fastest mid-fifties Porsches, like the 356 GT and 550 Spyder. 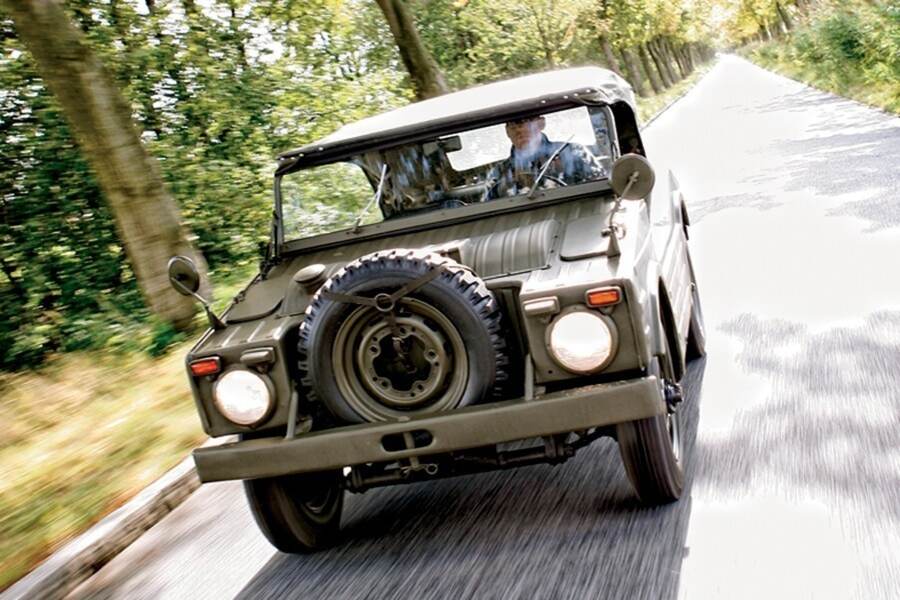 The example we’ll drive this day is one of a reported 22 Porsche 597s that were built for Bundeswehr testing. Owner Oliver Schmidt bought it after he was offered two 597s for his Hamburg-based collection about five years ago. One was a restoration project, the other this un­modified time capsule. He says that no more than 15 examples of Porsche’s 597 are thought to have survived, which would make the 597 rarer than the far more sought-after 550 Spyder.

Schmidt says the 597 is an easy car to drive. And, once I sit down on its plain driver’s seat and release the clutch, I find that he’s right. Actually, it’s a lot like driving a Beetle. The 597 certainly doesn’t offer the performance you might expect from a Porsche, even though its motivation comes from a slightly detuned Por­sche flat four. Christened 1500 Nor­mal when used in Porsches, this air-cooled engine was often called “Damen” (Ger­man for “Lady”) by its fans. With plain bearings, low-compression pistons, and a single Solex carburetor, it’s good for 50 hp. Naturally, it is situated out back, and you can feel it. When you floor the throttle, it feels like the rear axle hinges forward, only to slowly bounce back when you release the pedal again. 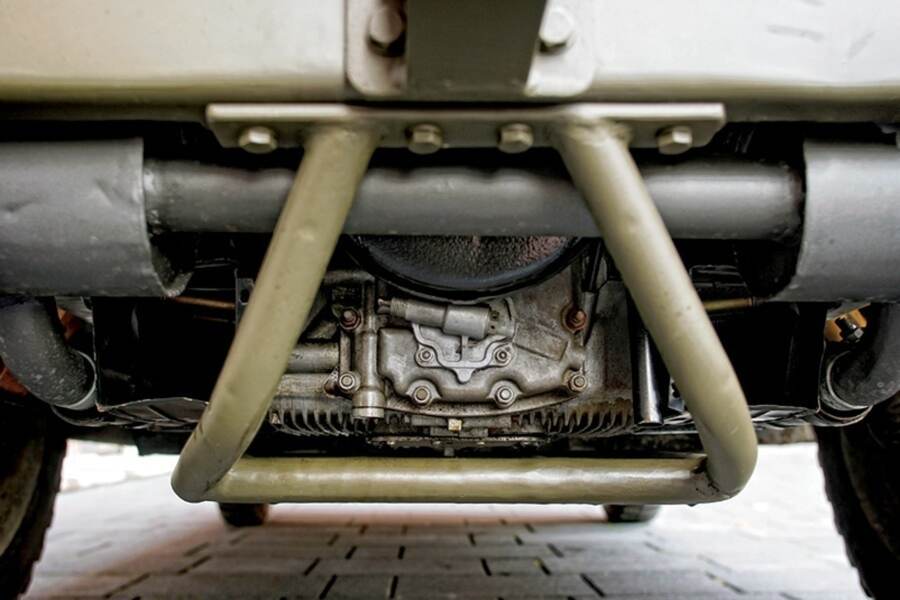 Weighing just over 2,200 pounds, the 597 is some 440 pounds heavier than a 356. It manages a maximum speed of around 60 mph, but gets noisy by the time you get up there. On motorways, a cruising speed of no more than 50–55 mph is best. Most of the noise comes from the 597’s chunky tires, as its engine isn’t as raw as you might expect.

The 597 comes with a five-speed manual gearbox, which is easy to operate. This, too, feels very Beetle-like, but it comes with shift-on-the-fly convenience for the AWD. On normal roads, the transmission sends most of the power to the rear wheels, but an automatic locking differential allows power to be transferred to the front differential through an automatic coupling. When the going gets tough there’s an extra-low gear, but it’s best engaged while creeping.

I do just that when we reach the woods, and it works beautifully. The drive shaft rubs against the steel tunnel when you shift into reverse, but Schmidt says that it’s not a problem. Slowly but surely, we approach sandy bars and the little Porsche creeps up them with insect-like ease. When we later try to do the same in a Cayenne, the heavy SUV’s wider wheels dig themselves in immediately. For off-roading, the plainer Porsche definitely beats its plush successor. 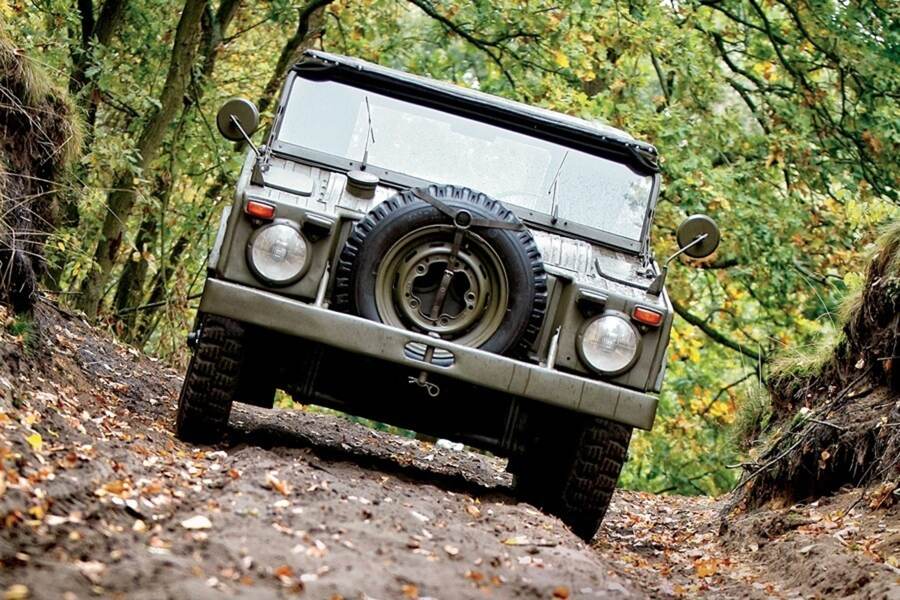 With its clever four-wheel-drive system and excellent off-road capabilities, the 597 went into the Bundeswehr’s test program looking good. But it had a strong disadvantage, too: It was expensive. Borg­ward came with its square and simple Goliath Type 31 while Auto Union brought its LKW, which would later be known as the Munga. Despite the Por­sche’s great performances, the Bundes­wehr opted for Auto Union’s two-stroke Mun­ga due to its relative simplicity and far lower cost. It reportedly cost one third the price of Porsche’s 597 while offering at least two thirds of its performance.

Ferry must have been frustrated with this, having spent 1.8 million marks to develop his armed all-rounder. But he had a backup plan: Offer the 597 to the civilian market. At this point, the car was renamed the Jagd­wagen, with Germany’s landed gentry as the obvious target. A more refined design was contemplated but never brought to reality. So apart from its paint colors, the Jagdwagen did not differ from the military 597.

The problem was that, unlike today, there wasn’t much of a customer base to advertise the car to. Predictably, there were few takers. Jagd­wagen production came to a close in 1958, after only 71 units had been built. There were still hopes for an updated version in five different body styles, but this never happened. Porsche would not put another 4×4 vehicle into production until 2002, at a time when the market looked — and turned out to be — ready to receive it. 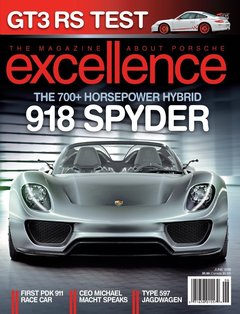