A quick fix for loose steering. 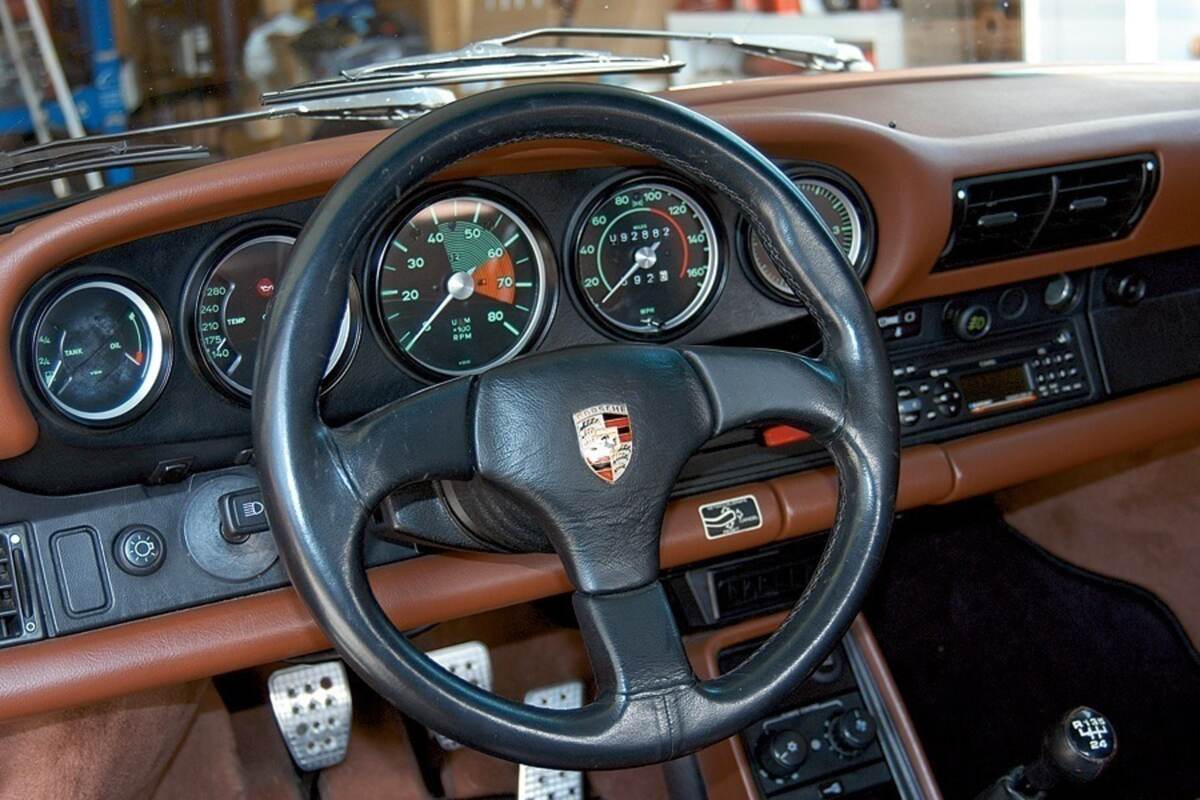 Two years ago, I was sitting at a traffic light, minding my own business, when I discovered that finding first gear was suddenly more like stirring soup than swapping gears. Our shifter suffered from sudden slop syndrome (SSS). It was remarkable. One minute, the shifter was working perfectly. The next, it was completely loose. Fortunately, new plastic bushings proved to be a relatively easy fix (Excellence August, 2005).

Well, it happened again. This time, I was behind the wheel, pulling out of my favorite coffee shop when the steering wheel in my 911 suffered a bout of SSS. With one turn of the wheel, the steering went from a famously responsive rack to about as tight as tube socks on a rooster. The steering wheel was rattling around in the steering column. I drove the 911 home, suspecting the top steering column bearing had failed. Now I’d like to tell you I fixed it immediately, but truth be known I suffered with the flopping wheel for a month before finally breaking out the books and wrenches.

A quick look through my manuals supported a belief that the upper bearing had failed. Next, I looked in a Performance Products catalog and was pleased to discover the replacement bearing, Porsche part number 911.347.771.02, was available at an affordable price. Scanning the page, I focused on yet another part. It was dubbed a “quick fix” for the 911 bearing, and for a mere ten dollars! I went from pleased to overjoyed. First of all, I hadn’t known of anything that could be repaired on a Porsche 911 for ten dollars. Second, the term “quick fix” has been one I’d seldom apply to my own repair efforts on this fabulous automobile. 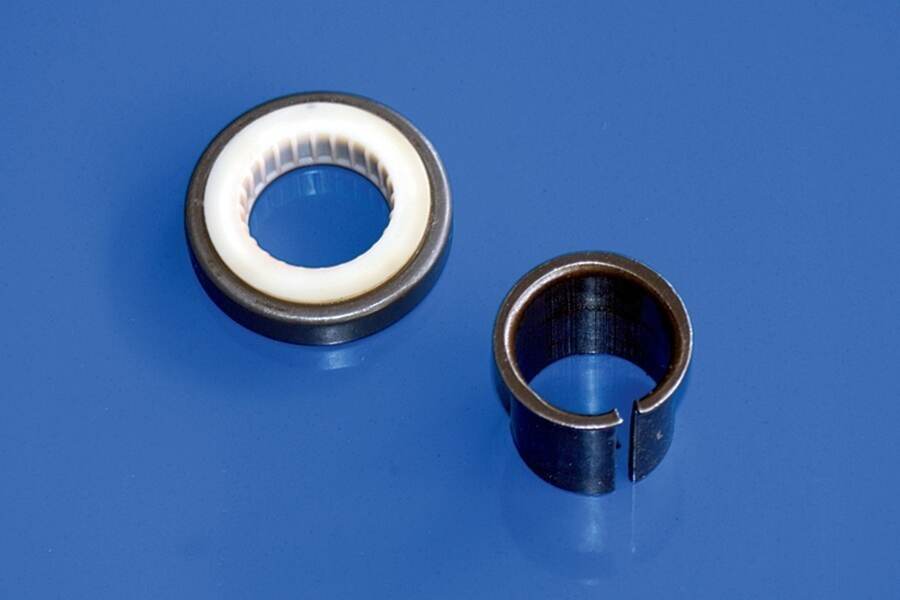 As it turns out, the bearing itself doesn’t fail in the column. Rather, it’s the plastic insert in the bearing that eventually gives up to years of use. Once again, it was our old friend plastic that had failed us. And, oddly enough, it was a piece of plastic from my wallet that would come to the rescue. The call was made, the parts ordered. I purchased both a bearing and a “quick fix” bushing so I would have parts on hand should it turn out to be a bad bearing. The total cost was less than $40, and simple hand tools would be the only tools required for the repair.

Hey, maybe this would be quick. 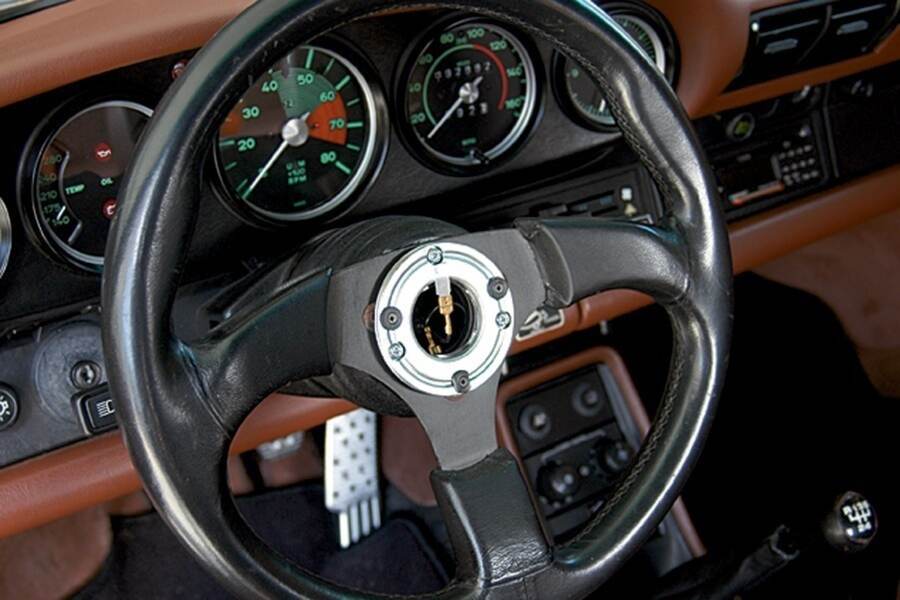 With a bit of wiggling and pulling, the steering wheel came off. The first signs of the failed inner bearing ring were small bits of plastic lying in the steering column cover. One movement of the shaft up and down confirmed the original diagnosis — the plastic inner bearing sleeve had failed. The good news was I had the parts on hand to repair the problem.

After wiping the shaft clean, I carefully removed the C-clip from the steering shaft. I contemplated changing out the bearing, but closer examination showed I didn’t have a puller that would easily pull the bearing out of the column. I’m certain I could have gotten the bearing out, but the words “quick fix” were still ringing in my ears, so I picked up the repair bushing I bought from Performance Products. 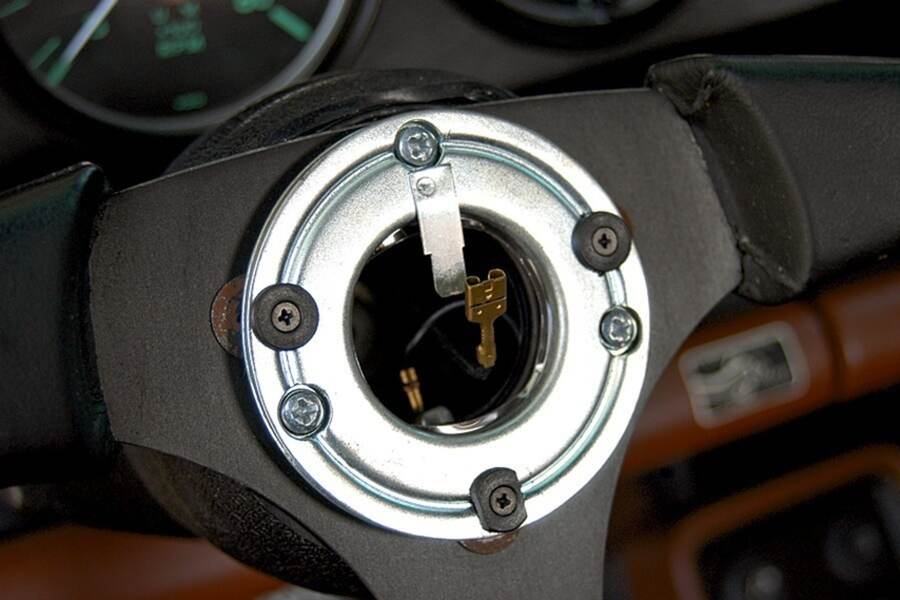 After cleaning out the steering shaft one more time and applying a light coat of grease on the inside of the steel repair bearing, I grabbed a 21-mm deep socket and a hammer. Using the socket and hammer, I drove the repair sleeve down the shaft and into the old bearing. The deep socket hit the top of the steering shaft before the new bushing was fully seated, so I used a square piece of steel to tap the flanged end of the bushing in until it was fully seated.

Once the bushing was seated, I proceeded to install the steering wheel, carefully lining up my marks. The lock washer, nut, and horn ring went on next. Finally, the wires were connected and the horn button was aligned. Elapsed time: 43 minutes. How could this be? A repair completed on a Porsche in less than one hour and with a total cash outlay of less than $10? Unheard of.

The news gets even better — the steering was new-car tight and that famous Porsche feedback was once again streaming from the steering wheel. There was one minor glitch, though, and it seems to be a personal problem with this particular mechanic. Try though I might, it seems every time I take a steering wheel off and replace it, the wheel is never centered, this in spite of my latest efforts with a Sharpie. Of course, this was the case once again, so I spent an extra 20 minutes removing the steering wheel and indexing it exactly one spline to the left to perfectly center the wheel. And then I was done. Hey, that was quick and easy. 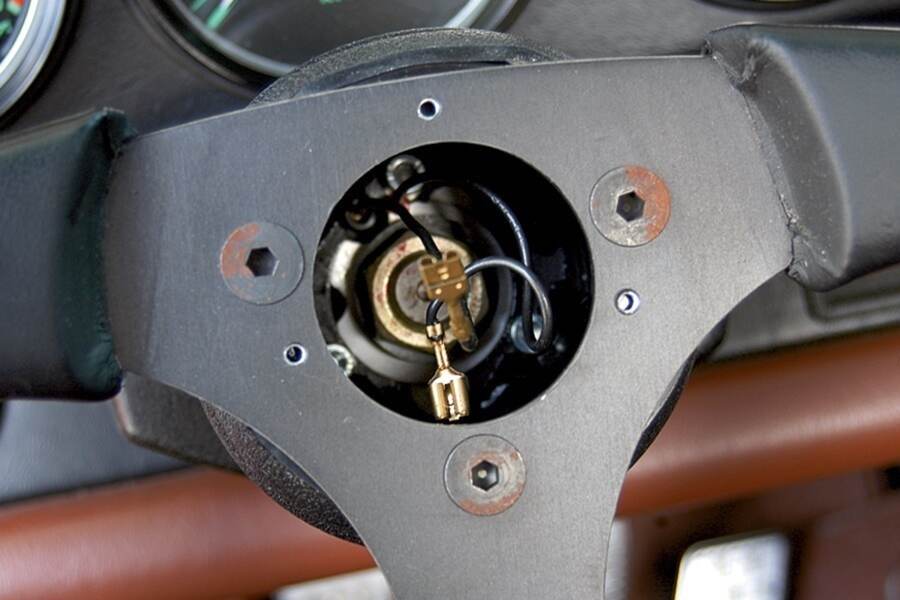 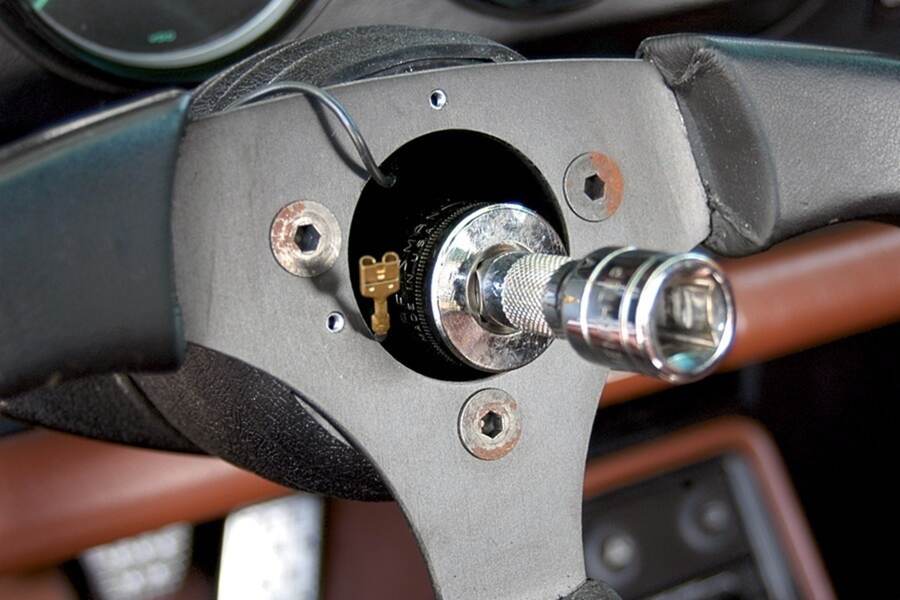 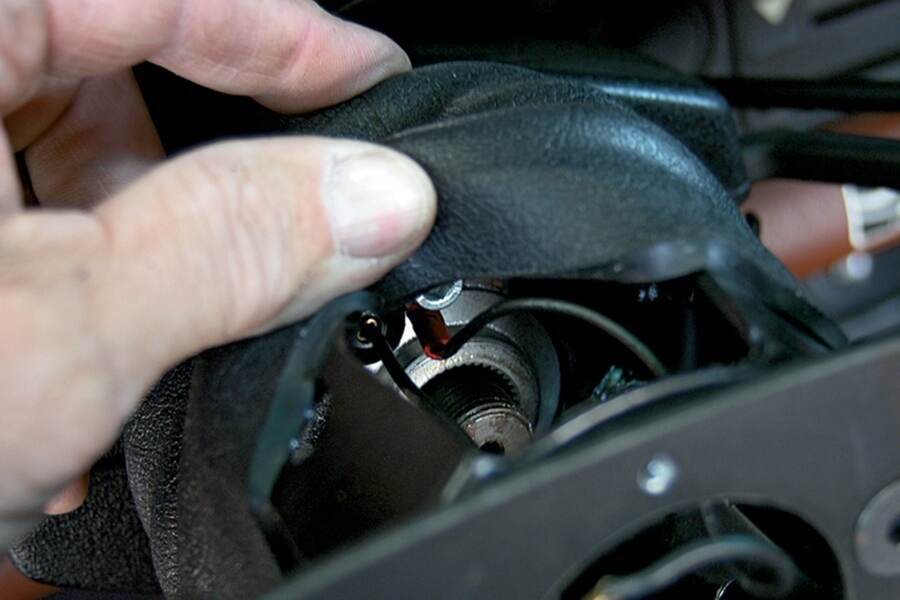 …but the boot on some hub adapters can be pulled back to get a box wrench in there. 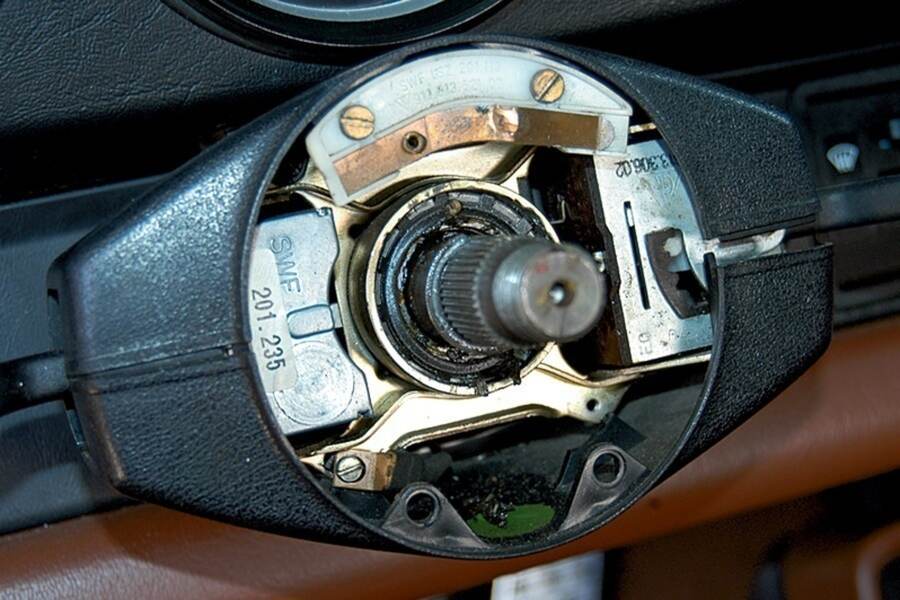 Plastic fragments in the lower column could be seen after removing the wheel. 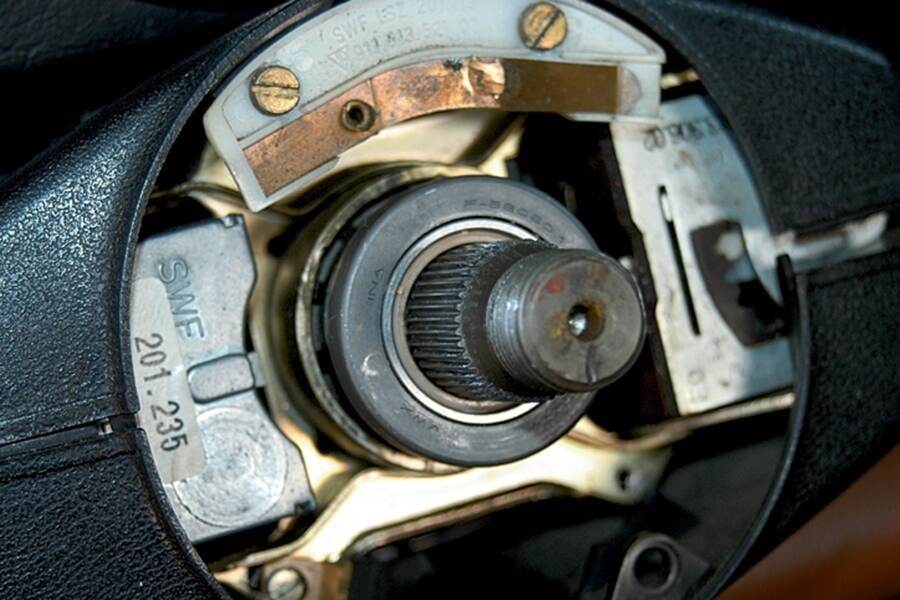 If you opt to replace the bearing, you must remove the old one and slide a new one on. 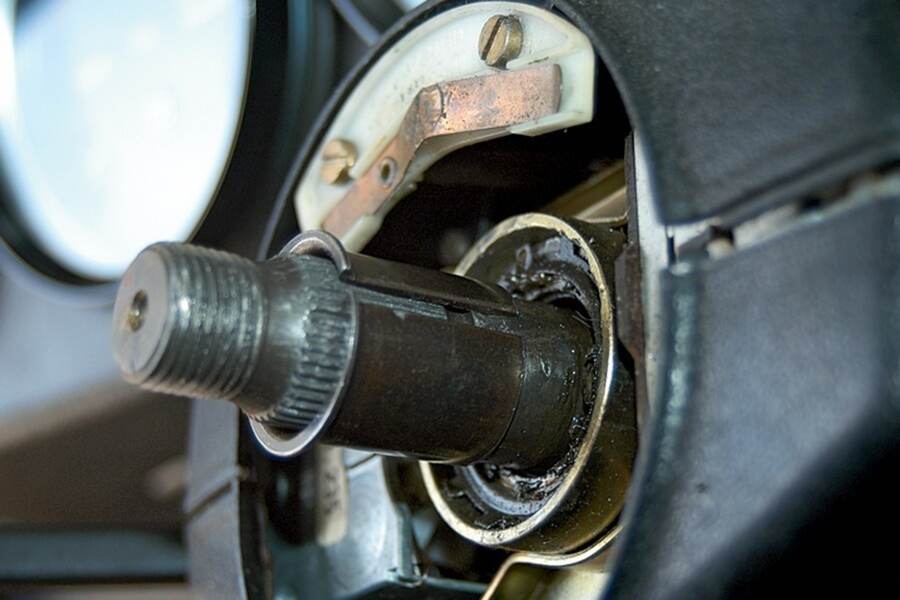 Quick and easy sounded good to us, so we decided to try the repair sleeve… 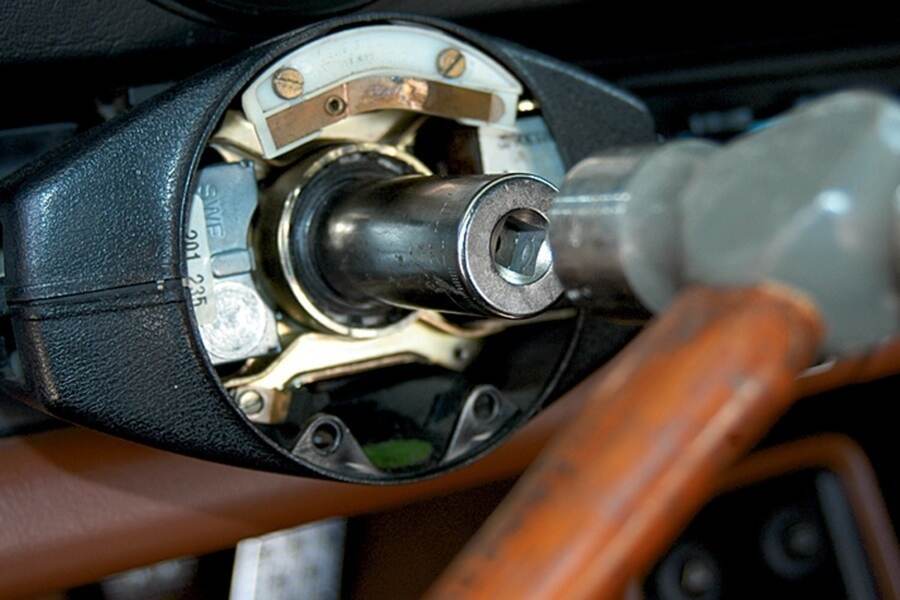 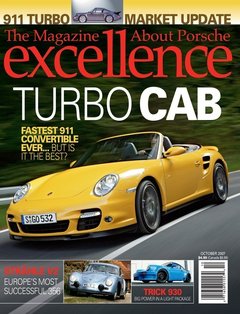