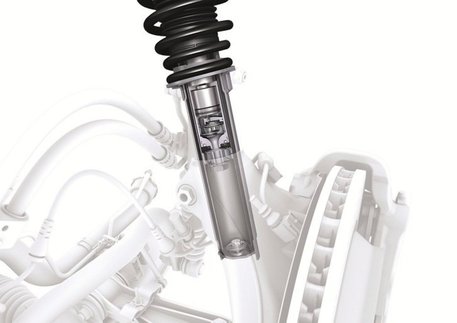 PASM shocks feature continuously adjusted damping rates that adapt to driving style and road condition. Sensors at each wheel send data to the ECU, which then adjusts each shock's fluid level via a bypass valve to firm or soften the ride. Image courtesy P

So you’ve chosen the Porsche you want to buy, but don’t know which performance-enhancing options to check. Complicating matters, many of the most popular and useful factory performance upgrades — ceramic composite brakes, electronic anti-roll bars, air suspension — cost thousands of dollars each. How do you know which options work for you?

Be prepared when you walk into the dealership for a test drive: Educate yourself. Knowing the functions of the various optional equipment is crucial to knowing what you need and what you want. If you have a clear understanding of your needs in a Porsche, you can specify the car that best fits your lifestyle — and stays within your budget. To help you out, we’ve put together a list of what we think are the five most valuable performance options for the money, their prices, and a description of how they work. We’ll roll them out one at a time in the coming weeks, so stay tuned to Of Note!

Some of Porsche’s high-performance models — Carrera S, Panamera Turbo, Cayenne Turbo, etc. — come standard with PASM. But if you’re set on a model that doesn’t have it standard, give the electronically controlled suspension some consideration.

In addition to lowering cars equipped with it by 10 millimeters, PASM shocks feature continuously adjusted damping rates that adapt to driving style and road condition. Sensors at each wheel send data to the ECU, which then adjusts each shock’s fluid level via a bypass valve to firm or soften the ride. We generally consider Porsche’s PASM suspension on any of its models to be good to excellent, depending on the model type and its specification.

PASM also has multiple modes of function that the driver can choose with the push of a button, which adjusts the preset damping force of the shocks. A 911 driven in PASM’s Normal mode, for example, rides on softer shocks; select Sport and the shocks firm up for a sportier ride and better stability.

If you want an even sportier ride than what regular PASM offers, Porsche does offer Sport PASM on the 911. It lowers the car another 10 millimeters on shorter, firmer springs, and has firmer anti-roll bars and revised front and rear spoilers. PTV or PTV Plus are also included as part of the Sport PASM package.