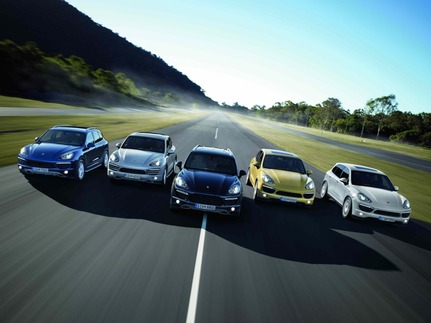 What started with an S and a Turbo has evolved to a Cayenne, Cayenne S, Cayenne S Hybrid, Cayenne Diesel, and Cayenne Turbo/S

A decade after the first Cayenne, a Reuters news agency article cites the business logic that pushed Porsche toward SUVs and sedans while questioning the costs in terms of the iconic sports-car company’s brand image.

“Manfred Wilke loves nothing more than speeding down the German Autobahn in his 911 coupe.

Gazing at a 911 Carrera GTS with a 100,000 euro ($125,000) price tag in Porsche’s flagship showroom in Berlin, the real estate manager said only cars like the sporting two-seater deserved to carry the Porsche badge.

He is one of a number of Porsche purists who are appalled at the Stuttgart-based sports car maker’s aggressive push into sport utility vehicles and family-style saloons.

Nearly 50 years after the launch of the 911, its newer, more roomy siblings, the Cayenne SUV and four-door Panamera, account for almost three quarters of Porsche’s sales, and some customers fear the company is straying too far from its racing roots.

“Only delusional marketers could attempt to turn Porsche into an offroader company,” said Wilke, 53. “It’s a flat-out insult to Porsche’s image and fame.”

You can read Reuters’ article here

Our take? Porsche has to protect itself, its employees, and its independence (well, so much for that last point, thanks to executive hubris created by massive Cayenne-driven profits). There can be no doubt that the Cayenne program funded interesting projects and racing endeavors as well as real innovation in Porsche’s sports cars. However, with the production ratio tilting heavily in favor of the four-door Porsches these days, the company’s sports-car ethos may be difficult to maintain.