Book revisits 986 Boxster reviews from around the world 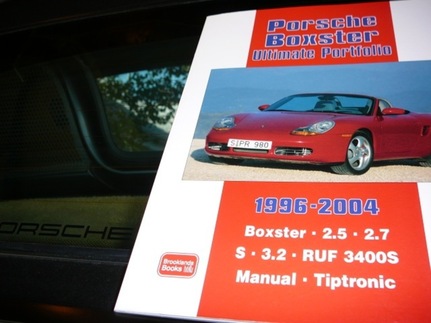 Fans of the 986 Boxster: Have you worn out your back issues of Excellence, rereading them for every scrap of information? Is your copy of Paul Frere’s The Boxster Story dog-eared? If so, we have a book tip for you.

We’ve run across a new-to-us compendium of 986 magazine reviews, Porsche Boxster Ultimate Portfolio, 1996-2004, compiled by the venerable R. M. Clarke. Unlike most of the Brooklands Books series, this one has 192 full-color pages, printed on better stock than some of the original magazines. Inside the surprisingly thick volume are 43 reviews, from magazines as varied as Autocar, Evo, Top Gear, Road & Track, and many more.

It’s an ideal guide to share in the exuberance of the world’s motoring press as Porsche’s first mid-engined car in decades takes its inaugural bow. The reviews are more frequent with the 986-1s, though the S in 2000 receives a few as well, along with comparison tests with the Boxster generally beating if not outright outclassing its perceived opponents. It winds up with an Evo long term test in 2004, and buyer’s guide from 911 & Porsche World.

The color stock really adds to the revisit, as well as reminding us that some of the 986s came in what would be pretty adventurous colors, as compared to the near- ubiquitous silver-grays and blacks of the present decade. One review features a “French Racing Blue” Boxster (think Mexico Blue), as well as a number of shots in the rare Ocean Jade Metallic Green, with gray top and interior. (Magazine photo reproductions do not do the Ocean Jade Metallic paint justice, in our eyes.)

Also a recurring theme, the early cars, at least viewed from wear and tear of the press fleet, had more quirks than the 986-2s that arrived in 2003. The glitches were usually some niggling micro-switch top issue or the occasional electrical gremlin.

On the miss side, not even the buyer’s guide article mentions checking for the common rear main seal leak nor the dreaded issue with the intermediate shaft bearing – for those you must rely on your trusty Excellence back issues.