If the car of your dreams doesn’t exist, build it! That’s exactly what the owner of this 911 3.0 SC hot rod did. 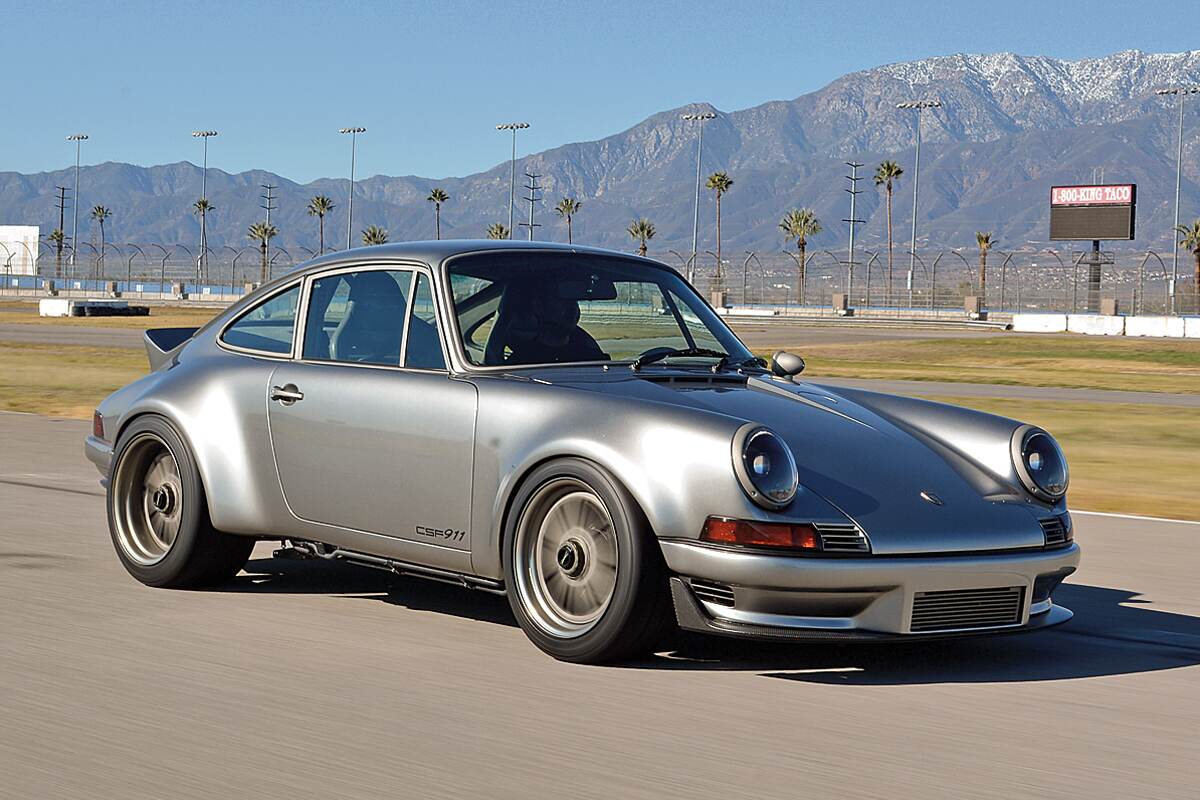 Seeing how the demand for air-cooled 911s intensified in the last ten years, Southern Californian enthusiast Ravi Dolwani felt that if there was a good time to build his dream 911, it had to be sooner rather than later. Not a stranger to top-tier builds or 911s (see “Super Beast” in the April 2020/#271 issue), Dolwani knew that building a Porsche that stood out relative to other high-end air-cooled creations would require something unique.

Not only would his latest endeavor need to make a statement, but Dolwani also wanted the 911 to occupy center stage of the CSF Radiators’ booth at the 2021 SEMA show in Las Vegas, which meant he had roughly 11 months. Although he had managed his other builds mainly on his own, he knew a project of this magnitude would require help.

Wind back to 2019, when Dolwani met Simo Veharanta, the owner of SV Automotive in La Verne, California. Dolwani had seen some of Veharanta’s work and dropped by the SV shop to chat and look at the projects Veharanta had in the pipeline. 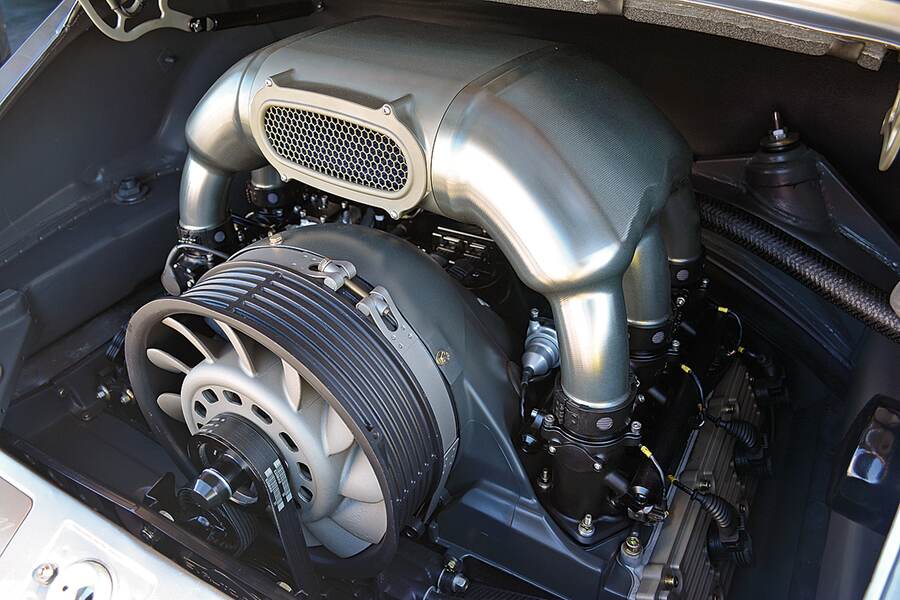 “Even though his brand presence was relatively unknown, compared to other flashier companies, I thought his work was exceptional,” says Dolwani. “When it came time to decide on a builder for my vision, my gut feeling kept telling me he was the right person.”

Given the timeline and the fact that he had several projects in the works, Verharanta needed time to mull over Dolwani’s 911 build proposal.

“The challenge was that Ravi came to my office on December 31st (of 2020), asking us to build him a car that usually would be an 18 to 24-month build,” Veharanta recalls. “I had time to think about it. Ravi had good contacts and components he offered to bring along with him. Ultimately, I relented and told him, ‘Let’s give it a shot.’ We started running, and had we not done so, the car would not have been finished in time.” 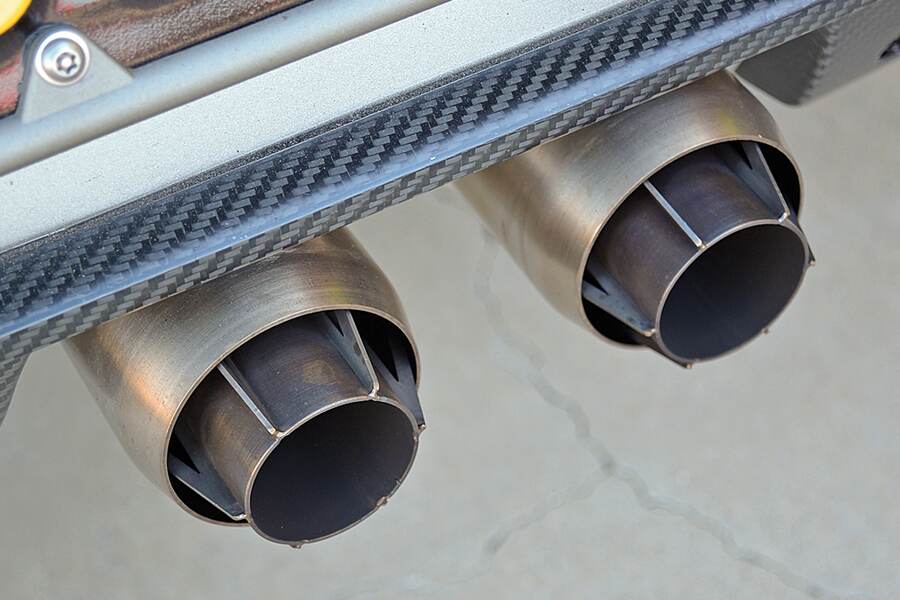 The car, a 1982 911 3.0 SC, was completely disassembled so it could be dipped in an acid bath to remove the paint. The body was then sent out to have 930-generation 911 Turbo flares welded on and the roof converted to a non-sunroof panel. Choosing a color would require over 20 different paint samples, provided by Santana’s Auto Body in Ontario, California, until Dolwani found a custom-mixed metallic silver hue that was just right to his eyes. There’s a charcoal smokiness to it that is brought out by the tinted turn signals and Car Bone dual LED headlights.

Dolwani also worked with designer Jon Sibal to bring some truly one-of-a-kind design elements. Those changes include a carbon-fiber front splitter attached to a custom steel bumper, a similar carbon-fiber treatment to the rear bumper, and a custom ducktail engine cover with a carbon-fiber grille. In addition, the front was converted to a 1964-1973 long-hood style by adding an aluminum hood that features a gas filler door from a Porsche 959 supercar.

The interior is almost a story in itself. Dolwani had considered various materials and design elements, most of which had already been done. Sticking to his one-of-a-kind theme, he proposed the idea of taking Goyard handbags and making them the main design anchor. 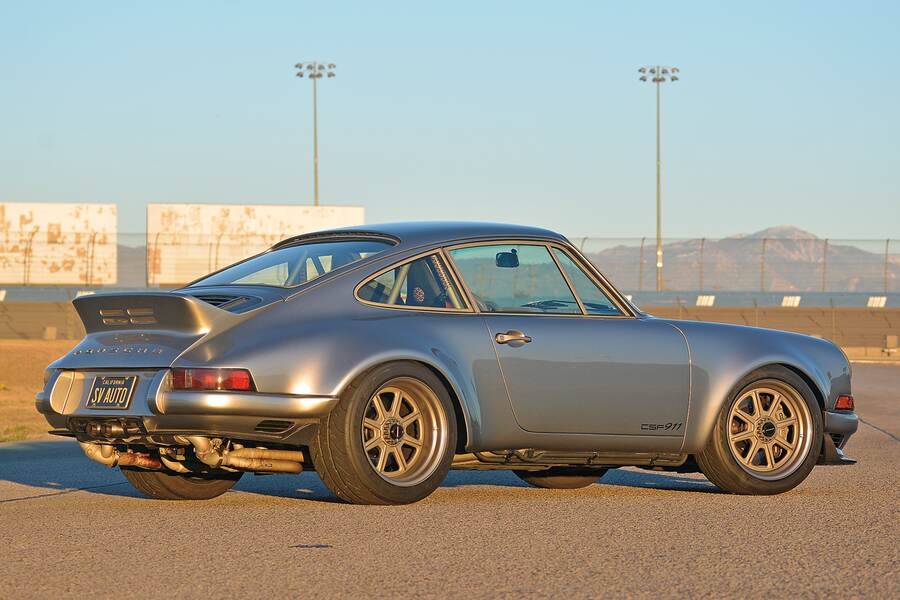 “I thought he (Verharanta) might think I was crazy or it was a dumb idea,” says Dolwani. “When I told him, he loved it! He thought it was wild.”

Dolwani chose Goyard for a couple of reasons. First, he liked how the logo pattern formed a chevron, not unlike other materials he had considered. That pattern could then be extended throughout the interior. Secondly, unlike other high-end names, Goyard was much more exclusive. With only a few retail stores in the U.S., acquiring Goyard items requires a little more effort. Luckily for him, the French designer has a retail store in Beverly Hills. He admits to sending multiple employees to the store to purchase handbags so he wouldn’t appear to be hoarding or buying to resell.

“The material is actually canvas, not leather, so over time, it will patina very nicely,” says Dolwani. The job of deconstructing the handbags and painstakingly placing the pattern to line up consistently was carried out by Rogelio’s Auto Upholstery in Baldwin Park, California. 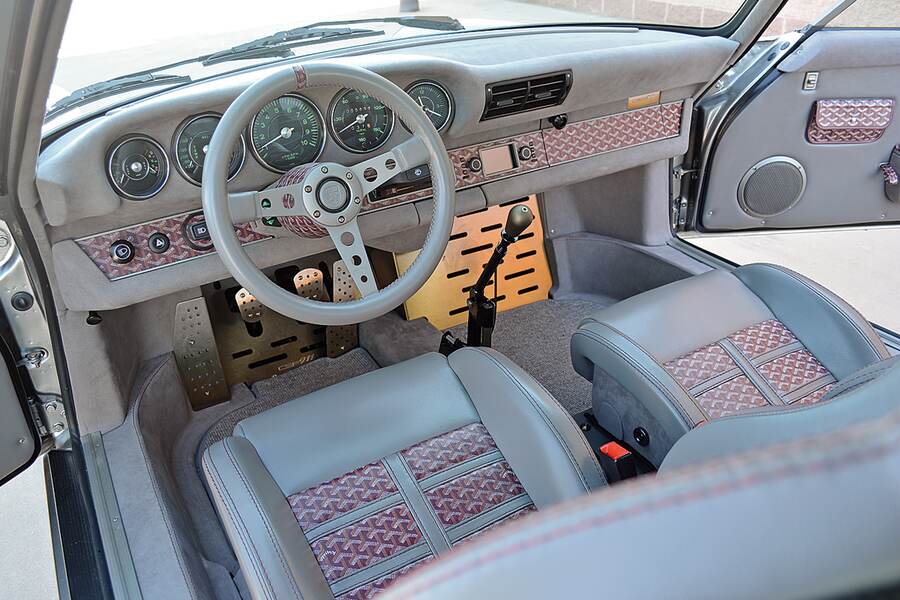 In addition to the Goyard trim, the interior adheres to a monochromatic look that hints at the interiors of German tuner cars from the ’80s. The Sparco SPX seats, door panels, Alcantara-covered dashboard, Momo Prototipo steering wheel, carpeting, and other interior components are a matching gray hue. Dalwani also wanted the car to be comfortable on long drives, so double layers of Dynamat noise insulation were installed in the doors, floor, and ceiling. To enhance the tactile experience, he added billet knobs for the headlights, glove box, and HVAC controls and fitted an Alcantara headliner.

Dolwani gave Veharanta free reign to build the best possible street performance engine he could. The origins of the 3.9-liter powerplant he came up with had actually taken seed on an engine he was building for another project.

“The idea was to build a screamer 3.9-liter engine, one that has ample torque at the low end and one that screams to 7,000 rpm,” says Veharanta. “I wanted 450 hp or better. We did not want this to be a racing engine in a street-driven car. The objective was to build a very serious street car that can be taken to the race track during the weekend.” 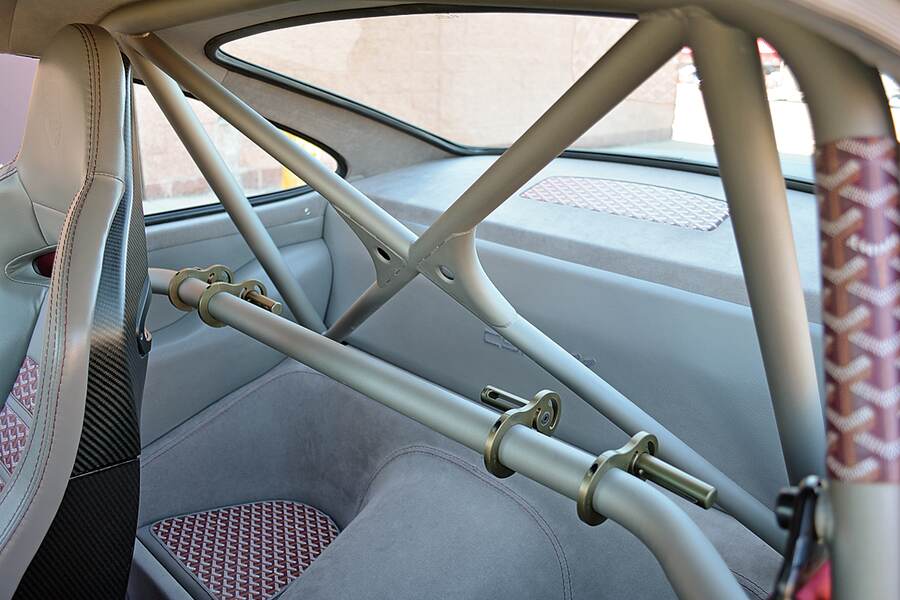 The air-cooled flat-six is based on a 3.6-liter unit from a 993-gen 911 with a Mahle Motorsports/LN Engineering 3.9-liter big bore package with 104-mm Mahle 11.4:1 pistons and LN Engineering Nickies cylinders. It also has Pauter connecting rods and a cross-drilled, balanced, micro-polished, and surface-hardened crankshaft. The cylinder heads were ported and received bigger RS valves, race-spec valve springs, and titanium retainers. The cams, which are the sources of the hot-rod idle notes, were ground to Veharanta’s specs by Web Cams. Hytech headers and a modified 991-gen-style 911 GT3 RS titanium exhaust system also play roles in the driving soundtrack.

To help keep its oil cool and flowing freely, the engine has an oil pump from a 997-gen 911 GT3 and a dual oil cooler system from CSF Cooling. It features a front-mounted oil cooler in the classic RS position and a right fender-mounted oil cooler that Dolwani calls an “OEM Plus” cooler, both of which are cooled by Spal electric fans. 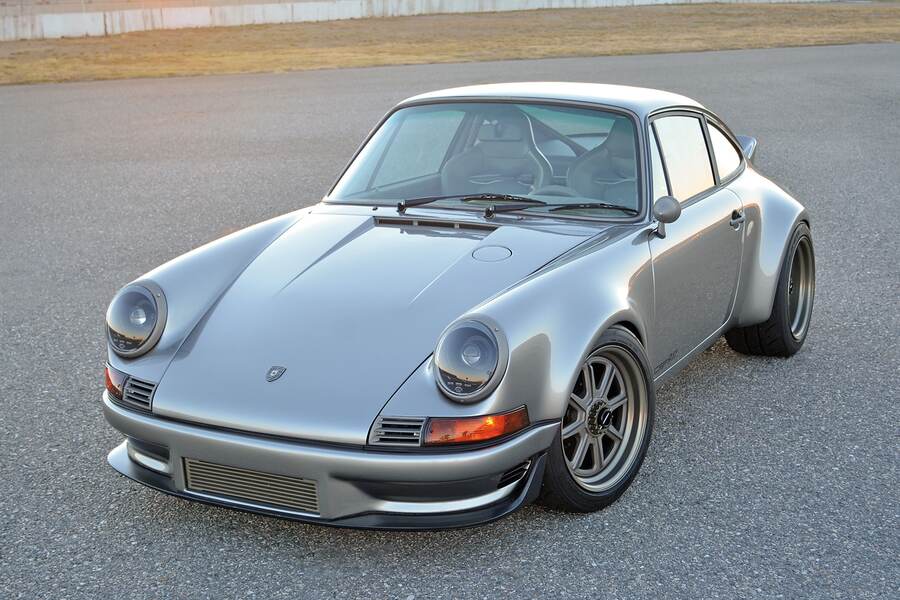 Shortly after returning from the 2021 SEMA show, the car was sent to World Motorsports in Torrance, California, to get a measure of its power. On their Mustang dyno—which Dolwani believes is conservative—the engine churned out 382 horsepower at 7,100 rpm and 306 lb-ft at 5,880 rpm, or about 440 horsepower and 350 lb-ft at the crank when corrected for 15 percent drivetrain losses.

To find out what those numbers couldn’t articulate, we head to the California Speedway in Fontana to get some driving impressions. This is the first time the redone and now much more powerful 911 will be driven in anger. After Dolwani laps during the first session, he heads to the garage area and tells me it’s my turn.

With my helmet fastened and the four-point Repa racing harness holding me in the Sparco seat, I row through the gears to get a feel for the CAE Racing Ultra Shifter, which is light and slips into gear with positive feedback. The clutch, which is heavier than stock but not race-car stiff, engages progressively and without fuss. 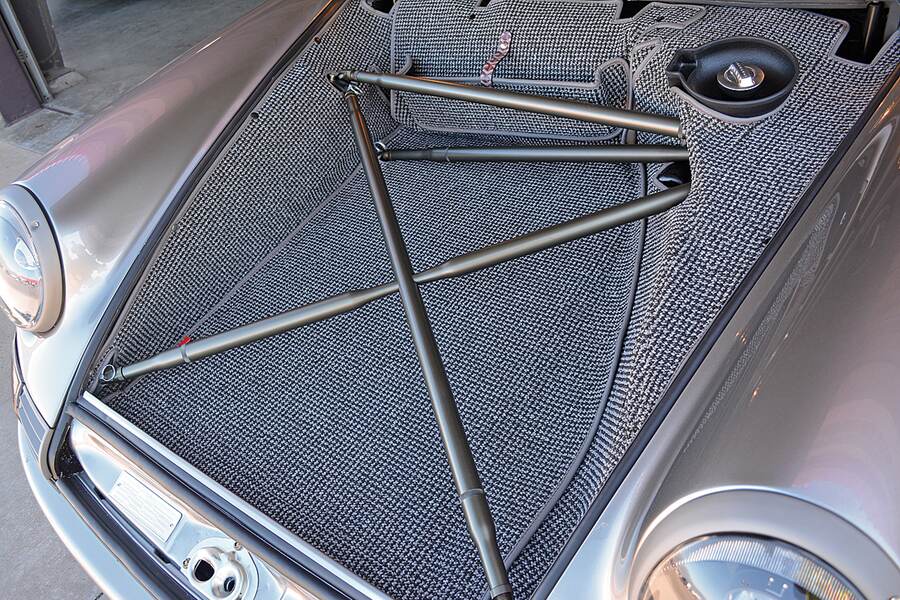 Just off idle, the engine pulls eagerly. Veharanta credits Beau Brown for tuning the engine to be both easily streetable and impressively high performing. The power builds linearly. A look at the dyno graph shows a nearly 45-degree angle up to about 6,700 rpm, where it plateaus. It pulls with such ferocity towards redline that you have to dedicate at least one eye to the tach needle at all times.

In addition to the power, there are other aspects of Dolwani’s creation that need evaluating. And as I get to know it, the car keeps reminding me that despite the KW V3 coilovers, RSR-spec anti-roll bars, and track-ready Falken Azenis RT-660 tires, I’m still in a 911. In other words, don’t drive into corners too hot, trailing the brakes, and then get off the throttle. If you do, you’ll experience that dreaded feeling of an unloaded rear end wanting to lead the way. Apply too much throttle coming out of turn and it will understeer. Lift the throttle coming into a tight turn and the light front end will make a beeline to the apex. Make the right adjustments to your driving style, though, and you’ll hit that elusive sweet spot that rewards you in ways only a 911 can.

While many resto-modded 911s are equipped with braking systems from the 993-gen 911 Turbo, Dolwani chose StopTech’s Level 3 brake package, which includes six-piston front and four-piston rear calipers and vented rotors. They hold up valiantly and don’t fade after many laps of repeated stops from triple-digit speeds. They are also easy to modulate to get the most out of the Falken tires, which cope well on the hot, abrasive surface of the California Speedway’s infield circuit. 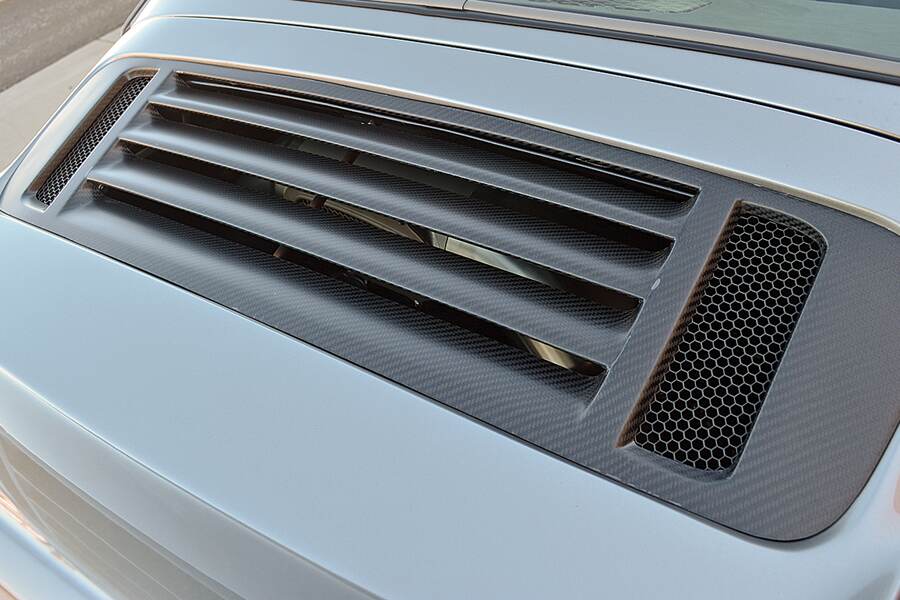 Hot lapping Dolwani’s 911 turns out to be a more physical experience than I expected, perhaps due to the extra steering effort required by the wide 225/45-17 inch tires in front and the high g-loads it can generate under braking and in the corners. Dolwani worked with Rotiform on the custom-designed three-piece, center-locking 17-inch wheels. They measure 17 × 8.5 in front and 17 × 11 in the rear. Their centerlock system is based on a Stanceworks billet center hub. The rear tires measure 275/40-17.

What Dolwani and Veharanta brought to this 1982 911 3.0 SC coupe didn’t change its character. Instead, the resto-mod process embellished it and expanded its performance envelope. It is, as intended, a bold, singular statement that can’t be easily replicated. Both credit each other for making their joint effort a truly collaborative and rewarding experience.

In the past, Dolwani had a habit of building projects and then selling them, but I got the impression that this one has a permanent spot in his garage. 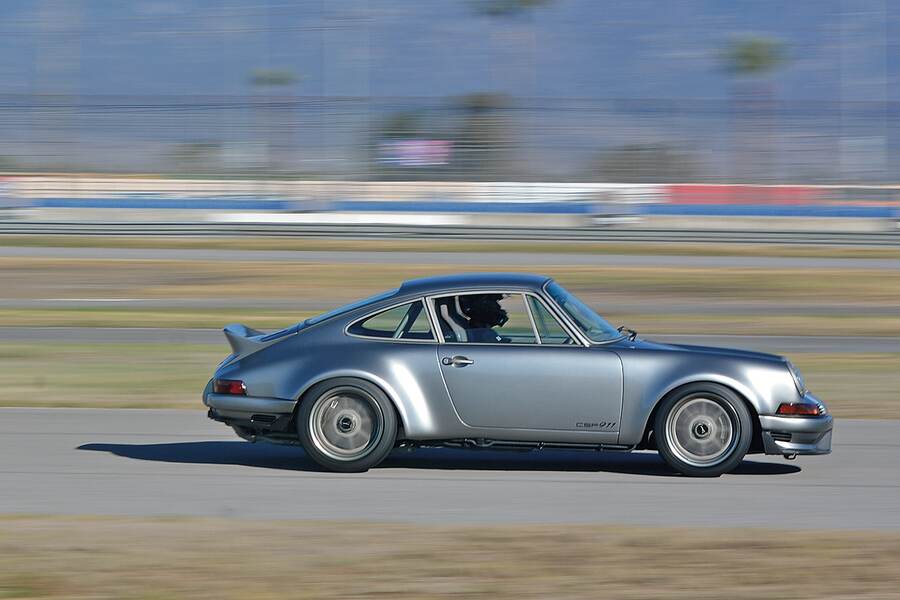 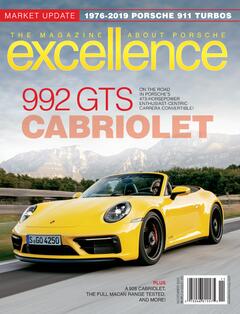 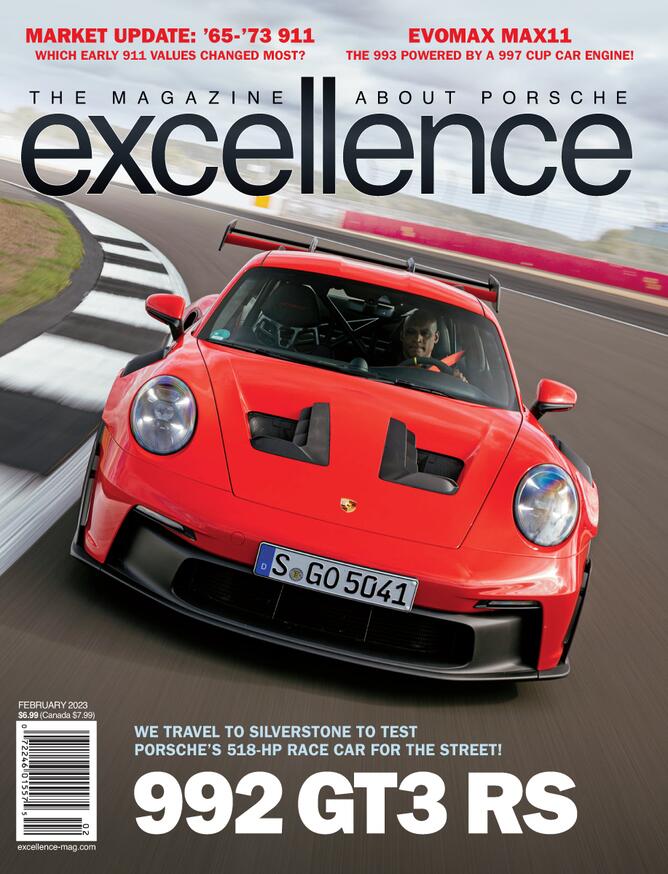