We talk Porsche race cars, competing in the U.S., and more. 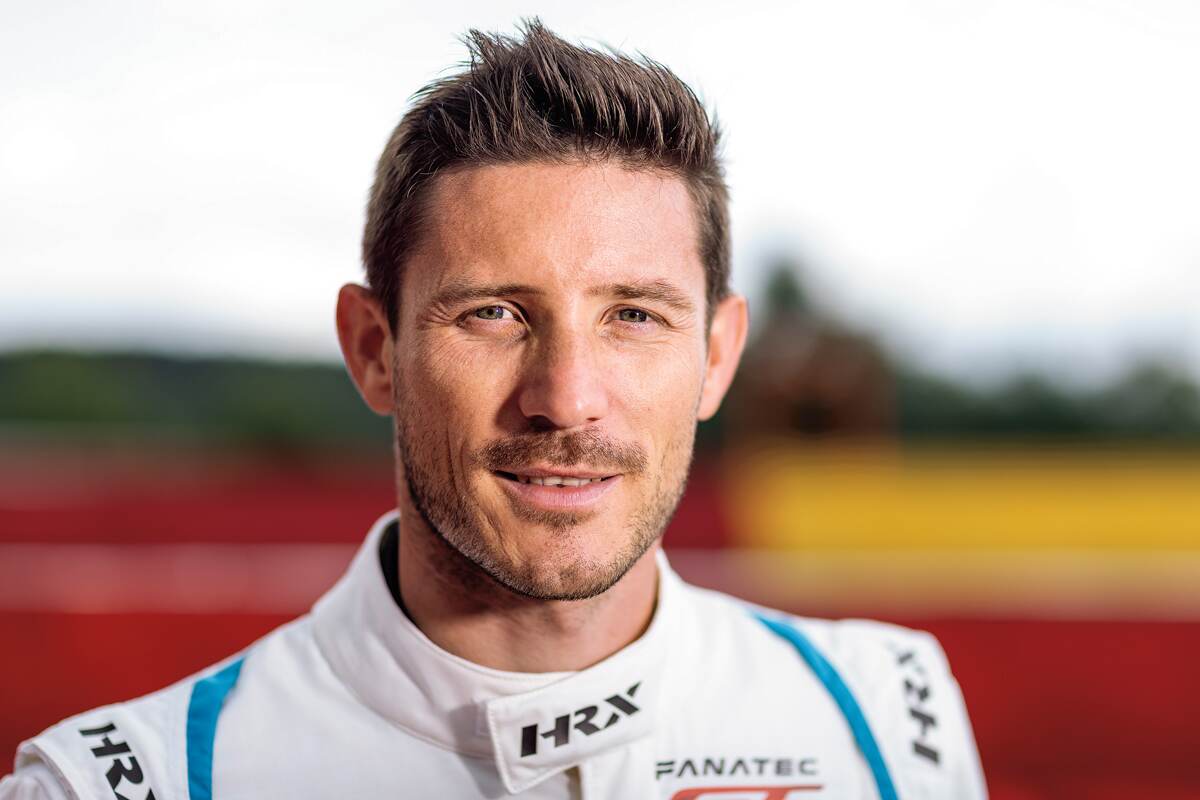 Kévin Estre of Lyon, France has built a reputation as one of the fastest drivers in the world behind the wheel of a Porsche. Estre started in go-kart racing as a kid, then gradually worked his way into formula cars for a couple of years before moving to Porsche Carrera Cup, scoring the French championship in 2011 and the German title in 2013.

After a brief stint with McLaren, Estre became a Porsche factory driver in 2016 and won some big races and championships over the last few years. He scored an LMGTE PRO class victory at the 2018 24 Hours of Le Mans and overall wins in the 2019 24 Hours of Spa and 2021 24 Hours of Nürburgring. Estre also won the FIA World Endurance Championship LMGTE PRO championship with co-driver Michael Christensen in 2018-19.

We caught up with Estre at Sebring during the first round of the 2022 FIA WEC season, where he ended up winning the LMGTE PRO class in a 911 RSR-19.

Excellence: What influenced you to get into racing?

Estre: My family is a racing family, so it started quite early. My grandfather and father started go-karting in the late ’70s, and I had a go-kart by the age of four. I raced go-karts from age 10 to 15 and then went to single-seaters and GT. My father still has a single-seater racing team in Europe, and my uncle has a go-kart racing team.

Excellence: How did go-karting and single-seaters evolve into going into Porsche Carrera Cup?

Estre: My goal since I was a kid was to go into Formula One. That was the dream, just like many other kids who start in go-karts. My family are pure motorsport people and are very much into formula racing and Formula One, so that was the goal, but I didn’t really have the budget to achieve that. 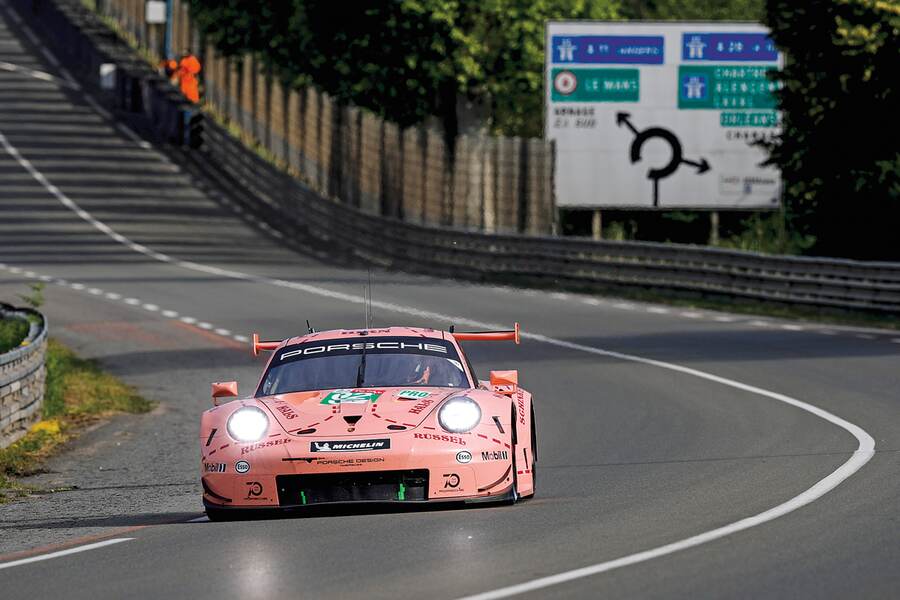 After my second year in formula racing, I had to make the choice to stop pursuing Formula One and to go into Carrera Cup in France, where I had sponsors to complete the budget. I understood quite early that I didn’t have the budget for Formula One, so I decided I still wanted to be a race car driver, and going to Carrera Cup was the best option at that stage. When I thought of endurance racing or racing besides single-seaters, Porsche was the brand that I wanted to be with. It was a quite easy fit to go into Carrera Cup.

Excellence: When you started racing in Carrera Cup, how early did your goal change to becoming a Porsche factory driver?

Estre: In the first year! My first year in French Carrera Cup, I took the seat from Patrick Pilet, who won the French Carrera Cup championship the same year I was racing in Formula Renault. He was driving for the same team that I ended up driving for and won the championship, and then he became a works driver. For me, it showed that it was possible to get a shot at being a works driver if I did well in Carrera Cup. Eventually, I got there, but it took me a while longer.

Excellence: How did you end up joining McLaren after racing in Carrera Cup?

Estre: I won the German Carrera Cup championship in 2013, and I had some talks with Porsche, but in the end, I didn’t get a factory drive at that point. I did one race with McLaren, and we were both happy, so they gave me a works driver contract in GT, which I took for two years, and then went to Porsche at the end of 2015.

Excellence: How did the transition from McLaren to Porsche happen?

Estre: I got kind of lucky. There was a clash between the Spa race in WEC and IMSA at Laguna Seca in 2015. Porsche needed drivers, and they sent me to Spa to replace Michael Christensen, who was racing at Laguna Seca and is my teammate now. We ended up getting a podium finish at Spa. I knew works driver Jörg Bergmeister well, and he also spoke about me to Porsche management. At the end of the year, I got a contract offer from Porsche.

Excellence: Can you talk about how Porsche 911-based race cars have changed over the years that you’ve been driving them, with engine placement, aerodynamics, and more electronics?

Estre: Quite a lot has changed, to be honest. The first Porsche I drove was a 997 Cup car with a rear engine and sequential gearbox but no paddle shift. Now I drive a 911 RSR with a forward (mid) engine, paddle-shift, and A/C, so it’s quite a big change. For the most part, the cars have gotten easier to drive with more aero, and that helps quite a lot. For me, one of the biggest changes has been the ergonomics in the car. We have a quite complicated steering wheel, but it fits very well with the driver, and the cockpit is very advanced and nice to drive from the driver’s point of view. 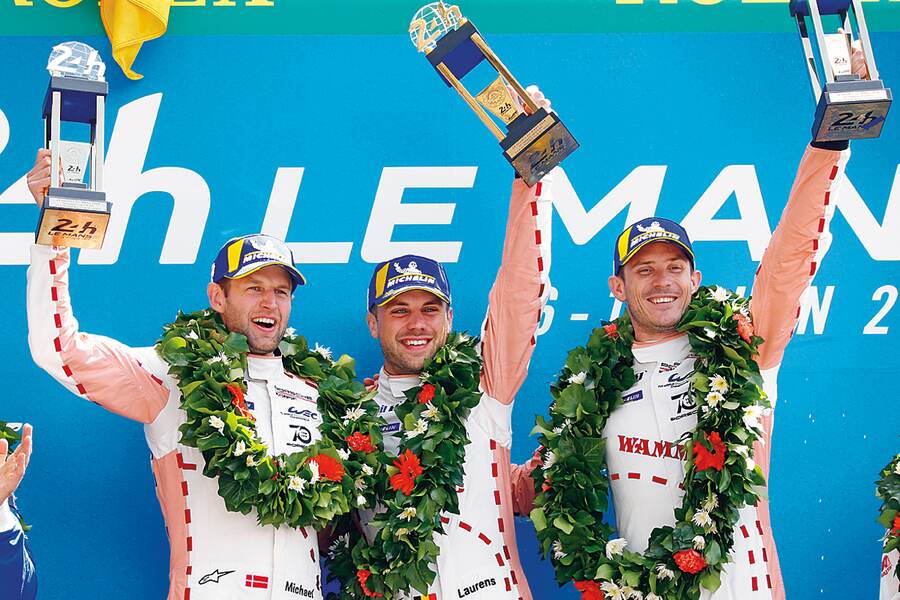 Christensen, Vanthoor, and Estre celebrate on the podium.

The other big change is the aero, which has taken some big steps. With the 991 rear engine car, you had to fight with the car going into braking spots. You could be fast, but the braking window was quite small. It had very good traction but was missing aero compared to cars like the Ferrari (458) and Ford (GT) at that stage. With the newer (mid-engine) RSRs, we’ve made improvements in that regard, but we miss out on some mechanical grip. The traction was always good with the rear-engined Porsches, which is not an advantage anymore, but we have other advantages.

Excellence: How would you describe your driving style?

Estre: Quite aggressive, I think.

Excellence: Your pass on the grass at the 2019 Nürburgring 24 Hour race has been very popular on YouTube. Are you surprised at how much that pass has been talked about and shared on social media?

Estre: I’ve probably done better overtakes in my career than that one that got a lot less credit, but the Nürburgring is the Nürburgring. The race had crazy hype, and it was the pass for the lead at 270 kph (168 mph) in the grass, but it was straight. It looked like the right decision when I made it, but it could have turned out to be the wrong one.

I’m known to be aggressive, but it’s not a rule that I try to follow. It’s just the way I am. It can be very good at some times, but you can’t push like that and slide around all the time when you’re trying to double-stint the tires.

Excellence: You’ve won some big races, but are there any that really stand out to you?

Estre: The win at Le Mans (in 2018) is the one I think of because it’s the race you want to win as an endurance driver with Porsche, and it was the first real success of my endurance racing career. 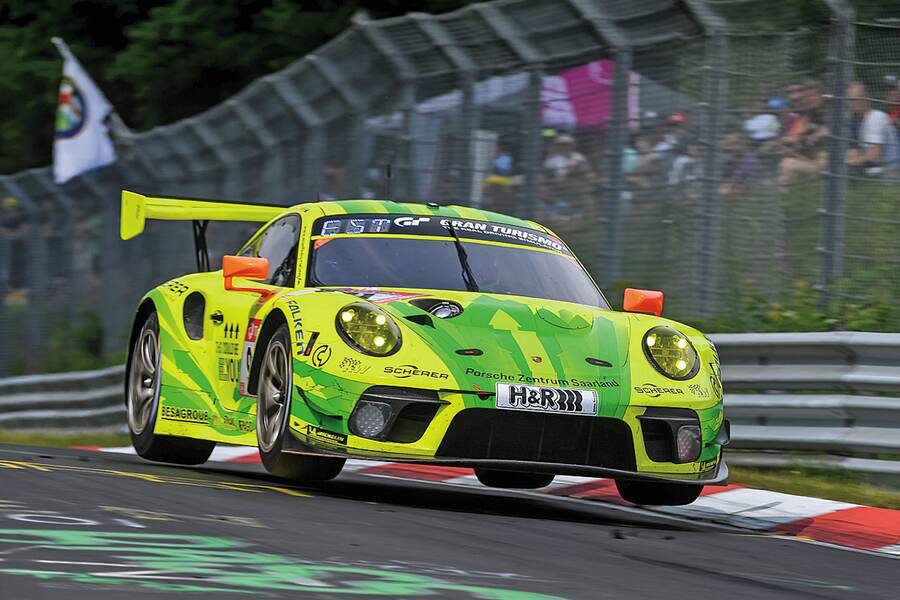 Estre catches air at the Nürburgring in 2019.

The Nürburgring 24 Hour win comes second after Le Mans, and that was another goal I set for myself in my endurance career. I really like that track, and we had been close a few years before, but to be able to win that last year in what was a very tough race with good racing was something I will remember.

Excellence: Do you have a favorite track?

Estre: The Nürburgring Nordschleife. That’s really the track that I enjoy the most to drive on, but it can also be a nightmare if it’s raining and you’re on the wrong tires. Le Mans is special, but in terms of pure joy in driving and adrenaline, the Nordschleife is my favorite.

Excellence: How do you like racing in North America versus Europe?

Estre: I like that the fans are close to you in North America, and they can come into the paddock and get autographs. It’s more open-minded and more open to the fans, which gives quite a different atmosphere than in Europe. I think only at the very big races in Europe do we have the atmosphere you have most of the time in the U.S., like at the Nürburgring or Le Mans. The U.S. tracks also give you more adrenaline. They’re more old school, and if you make a mistake, you’re going to be out of the race.

Excellence: Are you still involved in driver coaching with your father’s organization (Formula Motorsport in Courtenay, France)?

Estre: My Dad is coaching less than he did before. I used to coach more when I was doing Carrera Cup in France. I had to work and was working full time with my father while I was racing, doing coaching as well as mechanical work. I do less now since I don’t have as much time, but I really enjoy trying to help people get better. Young drivers are the most exciting to coach because they listen to you. If you tell them to take a corner flat, they’ll go do it. But if you tell a gentleman driver to do that, they’ll take a lot of laps to get to it.

I used to ride along in the passenger seat, but I stopped doing that when Sean Edwards died in 2013 (Edwards was an English pro driver killed while riding along with a student in Australia in a 996 Supercup car). I either watch on video or beside the track and instruct that way, or I drive. I risk my life racing and don’t want to risk my life being a passenger anymore. 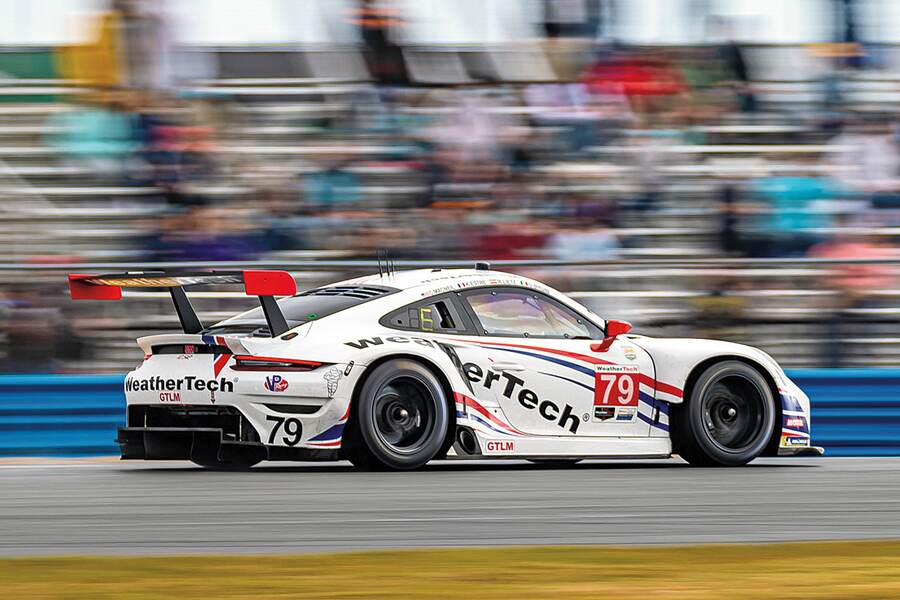 Excellence: What’s the most challenging part of getting a fast driver to get that few extra tenths on a track?

Estre: For me, it is all in the braking. People with less experience normally go too fast into corners. You need to get more feeling in the brakes from trail braking, deciding when you have to trail brake and how much, and when you need to come off the brakes to get the car to rotate. That’s usually what makes up the faster lap time.

Excellence: Are there any races you still want to win that you haven’t yet?

Estre: The Rolex 24 at Daytona and the 12 Hours of Sebring. I’d also like to win the 24 Hours of Le Mans overall.

Excellence: What would you be doing if you weren’t a racing driver?

Estre: I think I would have a hard time doing something else in racing. At the moment, I’m 33 and don’t see myself doing anything else. I don’t want to think about that.

Excellence: Everything seems to be heading toward electric cars, and Porsche has introduced the Mission R full electric race car concept. As a race car driver, how do you see the future with a potential move to electric?

Estre: I think you have to live in your time. For sure, we are petrol heads and like the sound of the engine, but on the other hand, I love racing. If we have to go to electric cars and race those, I will do it. I will always prefer this type of car (internal combustion), but racing is racing. We’ll have to see where it goes. I don’t see full-electric cars doing endurance racing in the near future, but hybrids are a good compromise.

Excellence: What do you drive on the street?

Estre: At the moment, I drive a Panamera Turbo S Hybrid because I have a family. I’d like to have a GT3 RS as a second car. 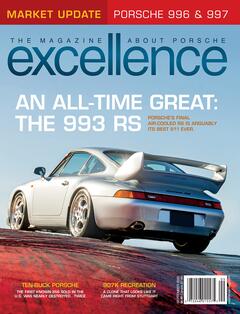