The Rise of the Carrera RS

After years of flat-twelve exotic racers, Porsche decided to choose a simpler approach. They found it in the Carrera RS. 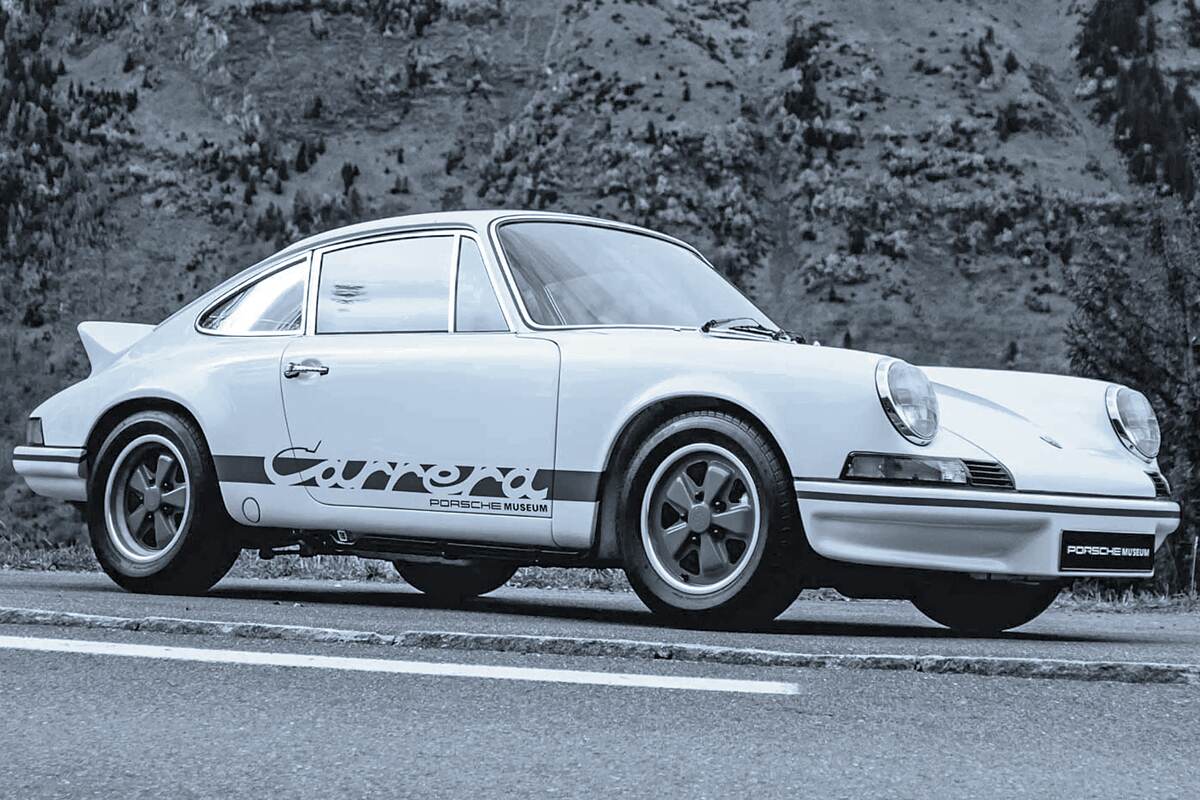 After Ernst Fuhrmann’s ascension to the top leadership position at Porsche in March 1972, “One of the first things Dr. Fuhrmann decided,” engineer Norbert Singer recalled, “was that we could not afford to continue an expensive racing program. Therefore we would concentrate on developing the 911 for racing.” In May of 1972 serious work began on the development of the 911 as a Group 4 Special Grand Touring car. Its homologation by the FIA motorsport governing body would require the production of 500 identical cars in a 12-month period.

Singer, who was put in charge of the project, faced two main challenges in planning this car. One was to determine exactly what the 911 needed in order to be more competitive as a GT racer. The other was to find out which changes had to be incorporated in the production car, as well as which other alterations could be made later under the Group 4 regulations.

Sheet steel thinner than standard was used for the main body-skin panels, cut to 0.70 mm (0.03 in.) from the usual 1.00 to 1.25 mm (0.04 to 0.05 in.). Much of the glazing, including the windscreen, was in special thinner, lighter Belgian-made Glaverbel laminated safety glass. The rear deck was of fiberglass, held down by rubber ski clamps. Cars not intended for road use had rear aprons, including the bumper uprights, made of fiberglass.

The interior was ruthlessly stripped. Gone were sound-damping materials and carpeting, replaced by rubber mats. Rear seats were absent. Door panels were flat and plain, with a pull cord releasing a simple latch and a plastic handle for closing. The clock and the passenger’s sun visor were gone. Seats were simple buckets with thin padding, rolled edges, and a thumbscrew adjustment for back angle. Missing from the Carrera RS were undercoating, door-sill trim, glovebox lid, coat hooks, and gas struts to counterbalance the front deck lid. The horn was a token offering. 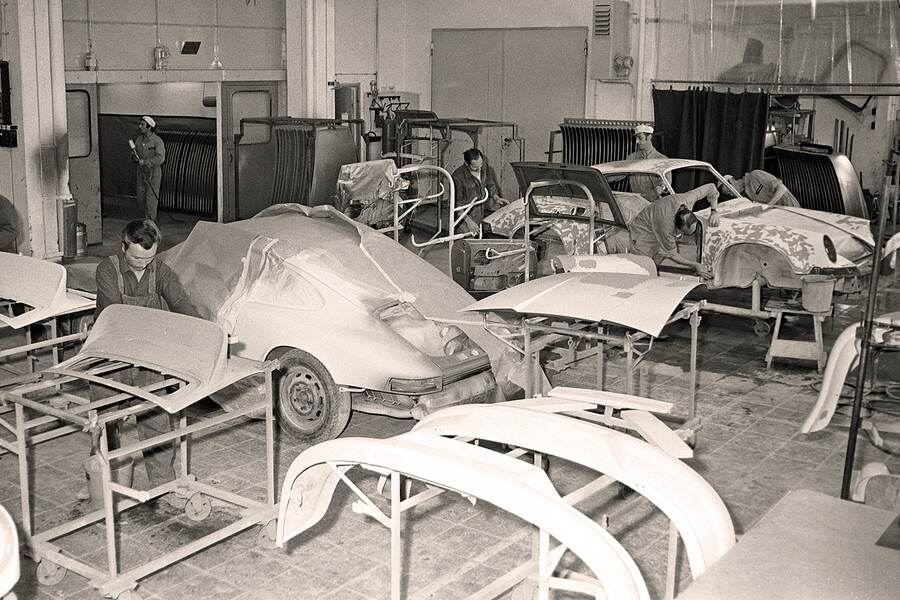 Bilstein shock absorbers saved another 7.7 pounds. This was the first time these German-made gas-pressurized shocks had been made standard equipment on a production Porsche. Anti-roll bars were much stiffer, increased from the standard 15 mm (0.59 in.) to 18 mm (0.71 in.) in front and 19 mm (0.75 in.) at the rear.

The width of the Fuchs aluminum rims at the front remained at six inches, while the rear rims were widened to seven inches. This allowed them to carry Pirelli CN36 radials that measured 185/70 × 15 in front and 215/60 × 15, with an even lower profile, at the rear. With this combination Singer’s tests showed that the Carrera RS could

corner at the highest lateral g-force rate of any production Porsche—0.912. None of the other cars could break the 0.9 g barrier.

To accept their wider rims and tires, the rear fenders were modified with deep bulges. In the light of the FIA’s rules these bulges were of added significance because they widened the base from which two more inches at each side could be tacked on under the provisions of the GT regulations. As a result, the track was 54.0 inches in front and 54.9 inches at the rear. 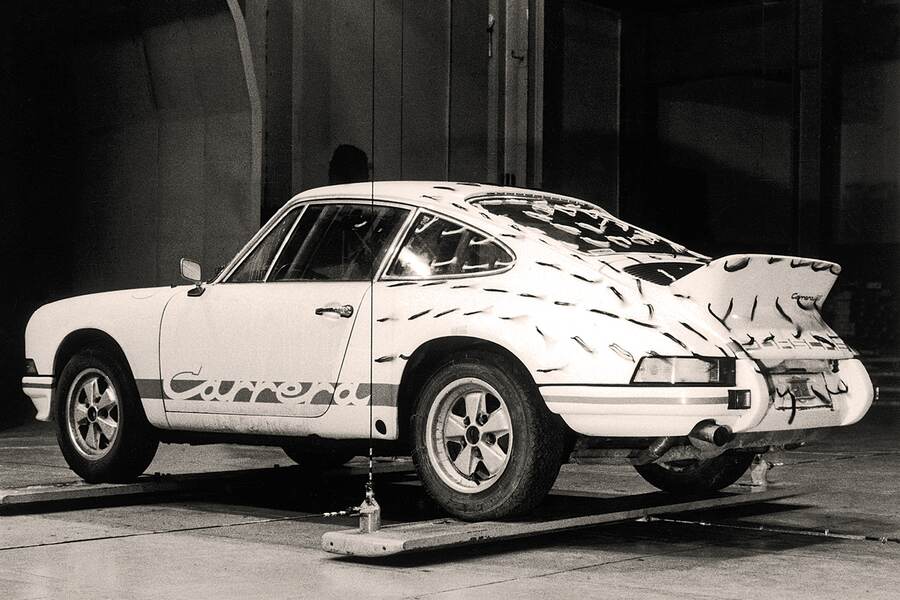 When viewed from the rear, the Carrera RS was distinguished from other 911s by more than its fender bulges. Jutting from the rear deck was a strange appendage that looked more like the bill of a platypus or a piece of Italian furniture than part of a modern GT car. The odd-looking addition was a spoiler, an aerodynamic device that quickly became the trademark of the new Carreras of the 1970s. In German it was known as the Bürzel, which could best be translated as “ducktail.”

Norbert Singer launched work on the 911 coupe’s aerodynamics, assigning the task to Tilman Brodbeck. Porsche engineers initially tried a boxy bustle on the back of the 911, then experimented with different spoiler heights attached to that bustle. They saw at once that such measures reduced both the drag coefficient and the amount of rear-end lift at the rear of the car. In standard form the body had a lot of rear lift—about 320 pounds at 152 mph—which contributed to instability and high-speed oversteer.

In further tests the bustle was trimmed away and the ducktail was left standing, jutting up to window-sill level from the center of the rear lid. This simple slab of plastic reduced the rear lift at 152 mph to only 93 pounds and dropped the drag coefficient from 0.41 to 0.40, which translated into a slight but measurable improvement in maximum speed. Credited for the design in its patent, applied for on August 5th, 1972, were Hermann Burst, Rolf Wiener, and Brodbeck. 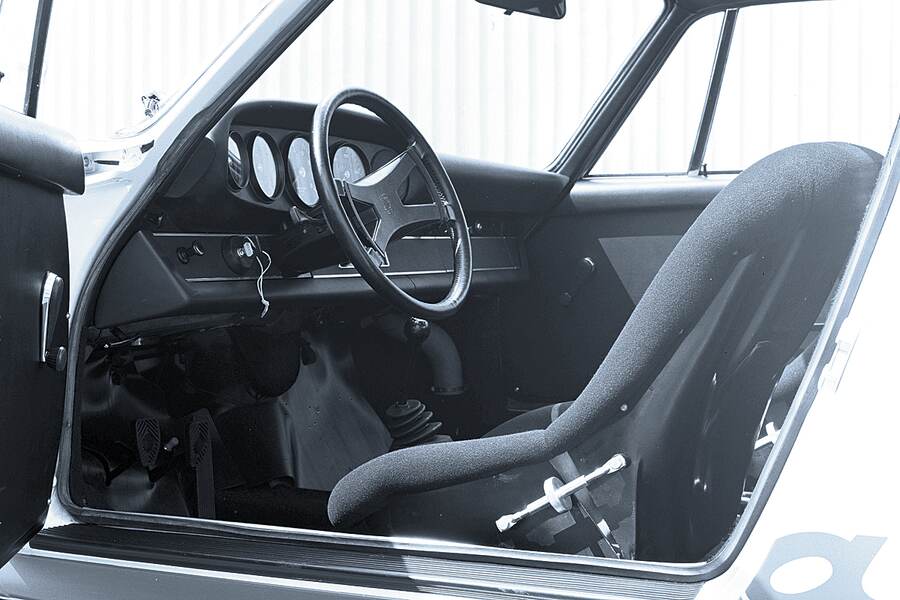 Seen in the Touring version of the Carrera RS is the special seat with its manual adjustment for reclining; both seats had this ingenious amenity.

Another technique carried over to the Carrera RS from the 917 was the use of Mahle’s Nikasil process for protecting the bores of its aluminum cylinders. This was used instead of the Biral cylinders of the 911E and 911S or the chrome-plated aluminum bores that had once been popular at Porsche.

Otherwise the Carrera RS engine—officially the Type 911/83—was much like the 911S of 1972 and 1973. It had the same compression ratio, 8.5:1, so it could run on regular fuel, the same Bosch mechanical injection, and the same valve sizes and timing. Its DIN (Deutsche Industrie Normen, or German Industrial Standard) output was up 20 hp from that of the 911S to 210 hp at 6,300 rpm. There was still speed above that as the rev limiter was set for 7,300 rpm. Maximum torque was 188 lb-ft at 5,100 rpm. A five-speed transaxle equipped with an oil pump was standard in the Carrera RS.

The idea of giving it the Carrera name was a stroke of pure genius. It was new to the 1970s generation of Porsche enthusiasts. Not for a decade had the RS name been applied to a car intended as much for the road as for the track.

In the 356 era, the Carrera name signified power by the Fuhrmann-designed four-cam engine. With the Abarth-built car (Carrera GTL) and then with the 904 (Carrera GTS), the name had been given to increasingly exotic Porsches, culminating in the Carrera 6 (906) race car of 1966 and 1967. Since then, this wonderful name, with its magical blending of foreign romance and racing excitement, had lain dormant at Zuffenhausen. They revived it for just the right car. 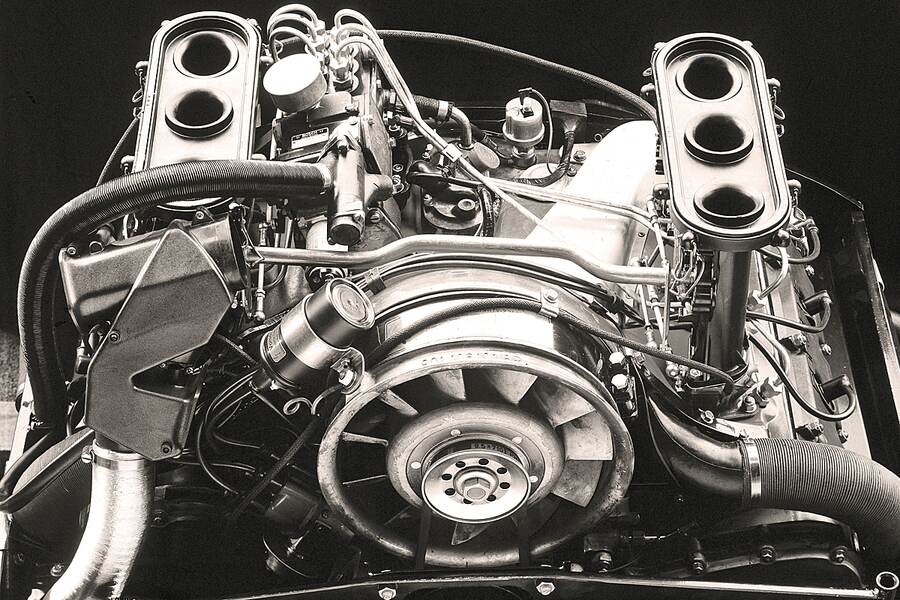 With its larger-bore Nikasil-lined cylinders taking it from 2.4 to 2.7 liters, the Type 911/83 six of the Carrera RS took an important step toward its future 3.0 liters.

Who would the 911 Carrera RS 2.7 buyer be? Would there be enough of them? It was easy enough for Porsche to build 500 such cars between October 1972 and February 1973 to make good the promised number in time for homologation for the new racing season. This was granted in advance by the FIA on November 27th, 1972 to take effect on March 1st, 1973, assuring acceptance by would-be racers. The peace of mind of Ferry Porsche and Ernst Fuhrmann, however, required that all those machines find buyers.

Porsche had to vault another hurdle to make the Carrera RS as appealing to the sporting road driver as it was sure to be to the racer. The West German national motor-vehicle authority refused to give the new type a blanket approval for use on the road. This, the Porsche men finally pried out of the reluctant bureaucrats, was owed to a conflict between the ducktail spoiler and their interpretation of Paragraphs 32 and 33 of the road regulations that dealt with the need to avoid sharp edges and corners on vehicles.

Porsche decided to bypass the head office of the motor-vehicle authority in Flensburg by having each Carrera RS individually type-approved for its road license by the local office in Stuttgart. This was permissible as long as no more than one thousand identical vehicles were processed through the same office. There seemed no danger of that number being exceeded with the Carrera RS. 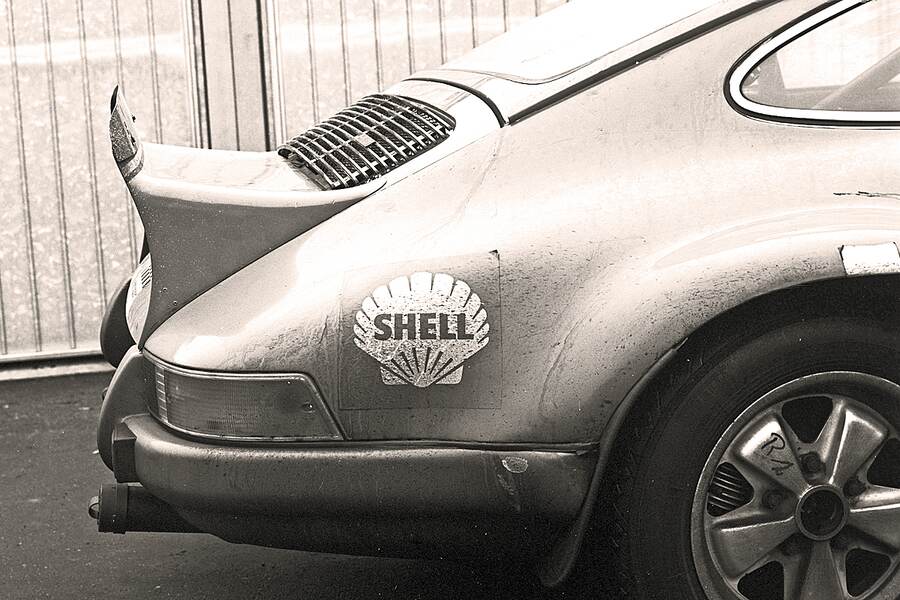 In September 1972, with only the first prototypes and photos to work with, the salesmen of the VW-Porsche VG went to work to get commitments from their distributors. They scheduled an extra-heavy barrage of ads. Even the Zuffenhauseners, who were normally divorced from sales concerns, got into the act. Every member of management who was entitled to a top-rank car was obliged to take a Carrera. Staff people knocked on the doors of potential 911S buyers to convert them to the new RS.

By the time the Paris Salon opened on October 5th, a total of 51 orders for the Carrera RS had been booked. That was an unexpectedly good start. The Salon brought an even bigger surprise. There was such enthusiasm for the car that the complete run of 500 was sold out a week after the show closed! Porsche had completely underestimated the popular appeal of its new-style Carrera.

The salesmen who had pushed so hard to sell the cars now had to switch to assuaging the hurt feelings of would-be Carrera RS buyers who had learned they were facing an indefinite wait. Their orders held up, so over the winter Porsche decided to build a second series of 500 cars. Understandably it also took that opportunity to bump the price up an additional 1,000 Deutschmarks.

On April 9th, 1973 the 1,000th Carrera RS was completed, which conferred an additional benefit—it could now be homologated in the Group 3 Grand Touring category, in which it would run with relatively little modification and would be highly competitive. On July 1st, 1973 that additional homologation was granted. 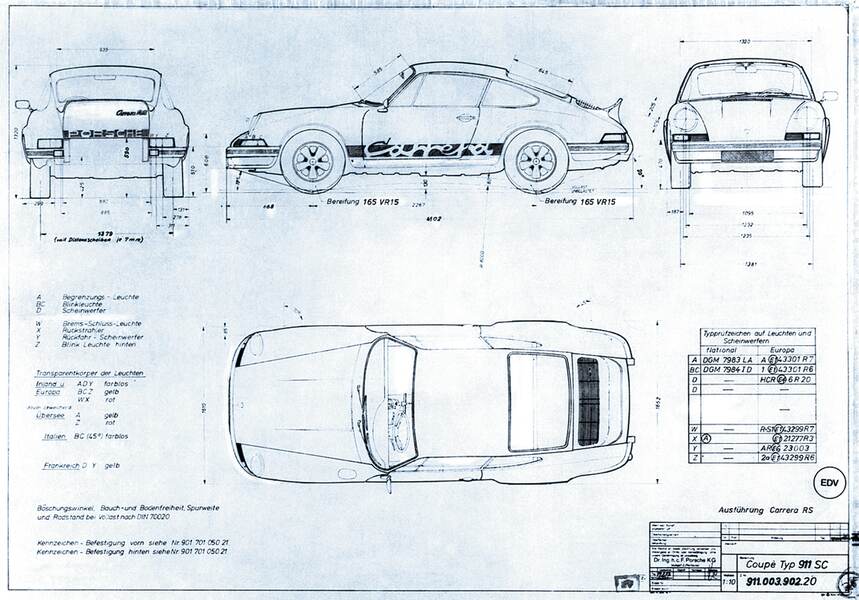 Calling it the “Coupe Type 911 SC in the Carrera RS Version,” a drawing set out the specifications for its road homologation.

The Carrera RS production line kept rolling until July 1973 when the last of 1,580 such cars was made, 1,308 of them being Touring versions and 200 Sport models. At this rate, it was no longer possible to sneak them through the Stuttgart motor-vehicle office for registration, so Porsche obtained national approval of the Carrera RS without its controversial rear ducktail. Many were sold in that condition but few stayed tailless long. Owners could and did buy the Carrera decklid from their dealer for $185 ($1,230 in today’s money), installed it, and had their local inspection office approve it.

This new Porsche struck a responsive chord in the minds of many enthusiasts. One who saw in it just the right car for his purposes, “a run in the Salzburg mountains at six in the morning,” was famed conductor and fast-car fan Herbert von Karajan. He ordered a red RS with black striping. Another enthusiast group, the editors of Autocar, headlined their test of the Carrera RS “Sensational, even by Porsche standards.”

Autocar tested a Carrera with its full touring equipment. It scaled 2,398 pounds with a half-full fuel tank, quite a bit more than the 2,150 pounds in the same condition that was typical of the RS in its basic stripped form. Front/rear weight distribution was 41/59 percent.

The car’s heft did not keep the Autocar Carrera from returning such brilliant acceleration figures as rest to 60 in 5.5 seconds, to 100 mph in 15.0, and the standing quarter-mile in 14.1 seconds. Its top speed was 149 mph. Testing one of the lighter homologation specials, journalist Paul Frère recorded the same time to 60 mph, two seconds less to 100, and a 150-mph maximum speed.

Porsche had done its job. Now it was up to the racers. 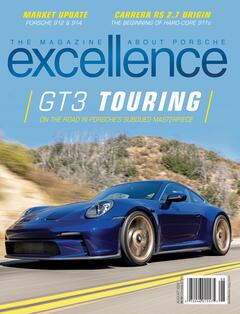