The Cayenne Turbo GT is quick around the Nürburgring. But what is it like on the road? 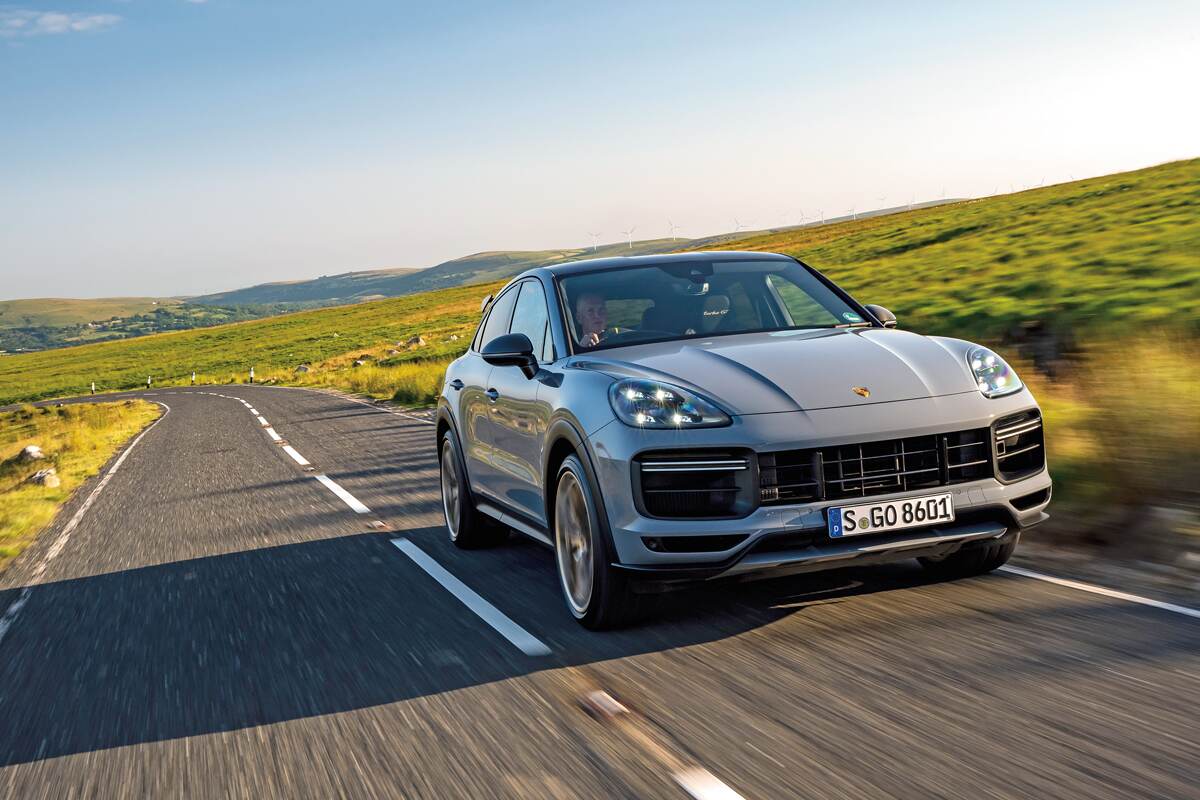 A lap time. That’s how the new Cayenne Turbo GT has been defined, with a stopwatch and a run around Germany’s ‘Green Hell’. The time is as special as it is pointless, the Cayenne Turbo GT monstering around the Nürburgring Nordschleife’s 12.9 miles of tough topographic-hugging tarmac in just 7 minutes and 38.9 seconds.

To put that into context among Porsches, a 480-hp 997.1-gen 911 Turbo lapped the Nürburgring in the same amount of time back in 2008. The Turbo GT’s time also scalps some hypercars of similar vintage, bettering the Lexus LFA, Mercedes-Benz SLR McLaren, and Bugatti Veyron, among others.

Porsche’s true sports cars might now be comfortably under the seven-minute threshold—assuming your name is Lars Kern or Kevin Estre—but an SUV achieving such a time is utterly ridiculous. It does, however, give credence to Porsche’s usual assertion that all the vehicles it produces are ‘sports cars’. 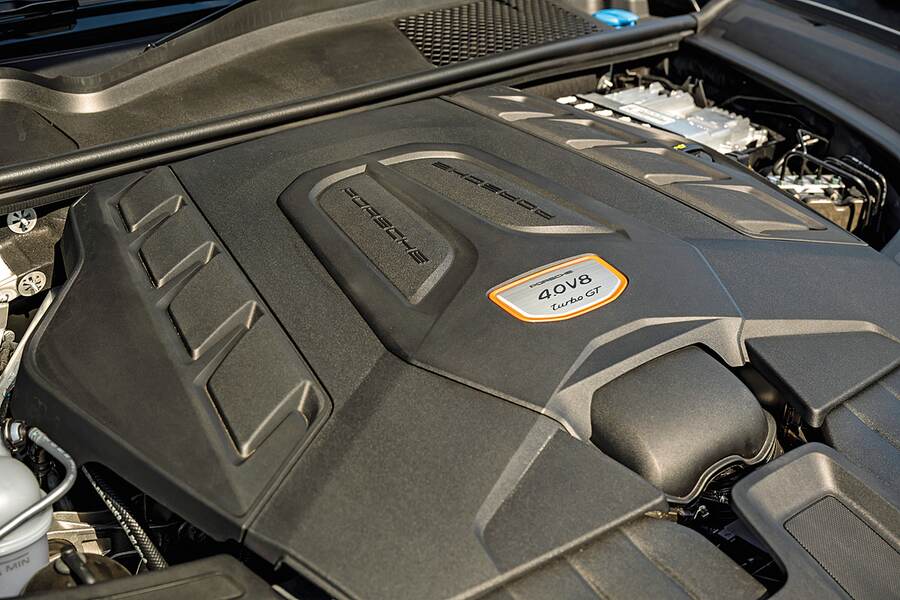 The GT badge you see on the Cayenne here is a misnomer. It’s not a product of Porsche’s GT department, though it does, apparently, have its blessing. To achieve that lap time and reassert the Cayenne as the fastest SUV around that track, the changes made to the Turbo GT version have been quite extensive.

Not that a standard Cayenne Turbo could ever be described as slow. But the GT adds everywhere, with the 4.0-liter twin-turbocharged V8 engine gaining 90 hp, for a total output of 631 hp, while torque is increased by 59 lb-ft, for 626 lb-ft. To achieve that, Porsche’s engineers haven’t simply boosted it further. They went through every element of the engine and refined it to deliver more. Boost is up, mind you; the turbochargers are now pushing out 1.6 bar (23.2 psi) of pressure.

Inside the 4.0-liter V8, there’s a new crankshaft and connecting rods, as well as a more robust timing chain and different torsion vibration dampers. In addition, there are material changes throughout, all applied to allow the engine to cope with the greater stresses put on it by the higher output and its enhanced capabilities on track. Necessarily, and somewhat unsurprisingly, the fuel injectors have a greater flow rate to fuel this beast. Also, the turbo compressors spin on larger diameter wheels to create the greater boost. 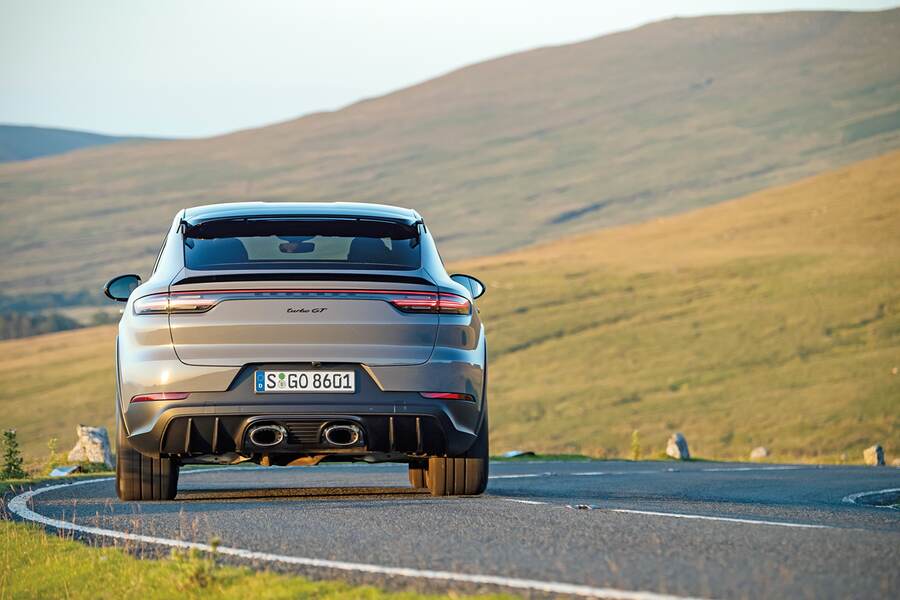 All that additional power and track capability means more heat. The volume of air flowing over the water-cooled intercoolers has been increased by them offering a far greater surface area, while three additional radiators join the cooling circuit for the V8. Not to be left out, there’s a water-cooling system on the eight-speed Tiptronic S torque converter (no PDK here) automatic transmission to, again, allow it to cope with track use.

There are 90 lbs of downforce at its 186 mph top speed, though Porsche isn’t saying how much there is in the standard car, so it’s a pointless yardstick. Porsche says those 90 lbs of pressure are achieved by a combination of the carbon fiber winglets and vanes atop the rear liftback, a 25 mm (0.98 in.) longer rear spoiler, and revisions to the airflow through the Turbo GT’s unique front apron, with its larger openings and lower lip spoiler, as well as underneath to the rear diffuser.

Regarding specifications, it’s had the entire toy box thrown at it, with Porsche Torque Vectoring Plus (PTV Plus) with an electronic rear differential lock, Porsche Dynamic Chassis Control (PDCC), Porsche Carbon Ceramic Brakes (PCCBs), the Sport Chrono Package, and rear-axle steering lifted straight from the pile usually marked “options”, and added to the standard one. But it’s not simply been a case of dropping these performance-enhancing elements on it. Instead, Porsche’s engineers have tweaked these features to improve the Turbo GT’s potential further. 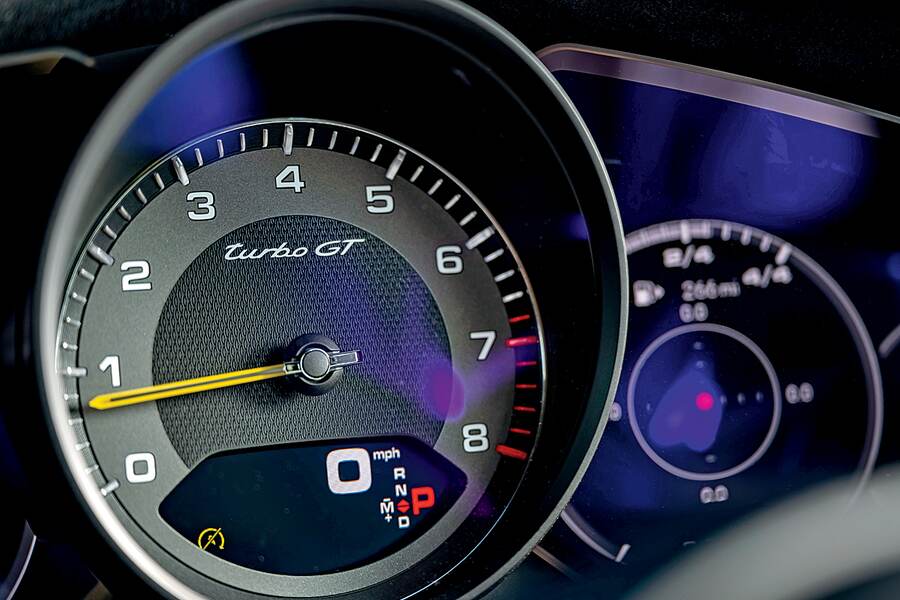 PTV Plus allows higher locking ratios on the limited-slip differentials, while the PDCC has been recalibrated to take into account changes to both the suspension and differing tire sizes. That suspension, a version of the three-chamber air set-up, is 15 percent more rigid and sits up to 17 mm (0.67 in.) lower, depending on mode, with the Porsche Active Suspension Management (PASM) dampers tuned to suit the differing spring ratings.

The wheel and tire sizes are changed, with the front wheels on the Turbo GT an inch wider, the 10.5J x 22 RO49 wheels wearing 285/35 ZR22 tires on the front axle, with 11.5J x 22 RO52 wheels and 315/30 ZR22 rear tires. The tires themselves are Pirelli P-Zero Corsas, developed specifically for use with the Turbo GT. Behind those GT Design Neodyme gold finished wheels are the standard PCCB brakes, with the only option in relation to them being which color you paint the calipers. As standard, they’re yellow, but in the unlikely event you want your fastest, maddest Cayenne of all to be a bit more reserved, Porsche will relieve you of some more money to paint them black.

Inside, like outwardly, the Cayenne Turbo GT wears its greater sporting intent proudly. There’s Alcantara covering almost everything. In the tradition of Porsche’s true GT models, the steering wheel has a straight-ahead marker in yellow at the noon position. There’s also a revamped Porsche Communication Management (PCM) system, which adds greater useability and allows non-Apple users to connect their smartphones, with Android Auto connectivity now possible. 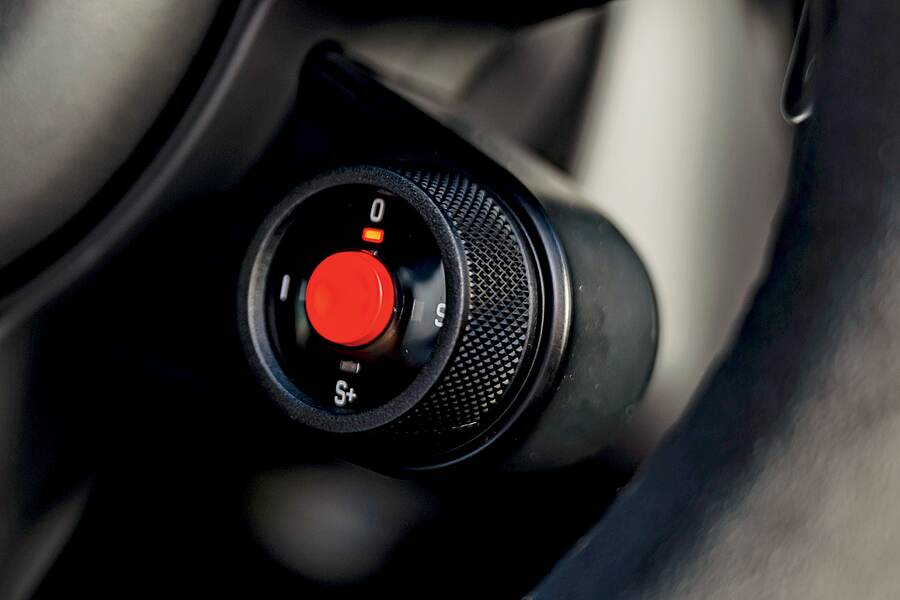 More connectivity with the Turbo GT doesn’t relate to just your devices, though, as, while the cynic in me questions the need for such a focussed SUV, the driver is loving every second! I’ve had two chances to drive it, neither at a track. However, the first was on a closed road, so there was the chance to wring it out in Launch Control mode to see just how savage 5,000 lbs of Porsche catapulting towards the horizon from zero to 60 mph in 3.1 seconds feels. That’s 0.6 seconds quicker than the standard Turbo Coupe, and it feels significantly quicker in reality.

It’s a quick baptism, too, because I do this at the Goodwood Festival of Speed, in front of a crowd of tens of thousands of people. Mashing the accelerator to the floor while holding the brake sees Launch Control activate before releasing the brake and having all hell break loose! It squirms to find traction, the rear slithering about on the slick surface. The Turbo GT roars off the line in a manner that’s utterly bewildering and laugh-out-loud in its intensity. Sure, you’d be quicker still in a Taycan Turbo, but for all that electric rocketship’s accelerative ability, the lunacy of the Cayenne’s delivery makes it a richer, more intoxicating experience.

The rest of the hill climb is a bit more sedate, as I’m mindful of the fact Porsche has only one Turbo GT here, a flint wall isn’t very far off the line, and that nobody in the crowd remembers the fast drives, but everyone remembers the crashes! I notice that the Cayenne Turbo GT feels significantly different from the standard Turbo Coupe it’s based on, leaving me wanting more time than a brief run up the Goodwood hill climb in it. 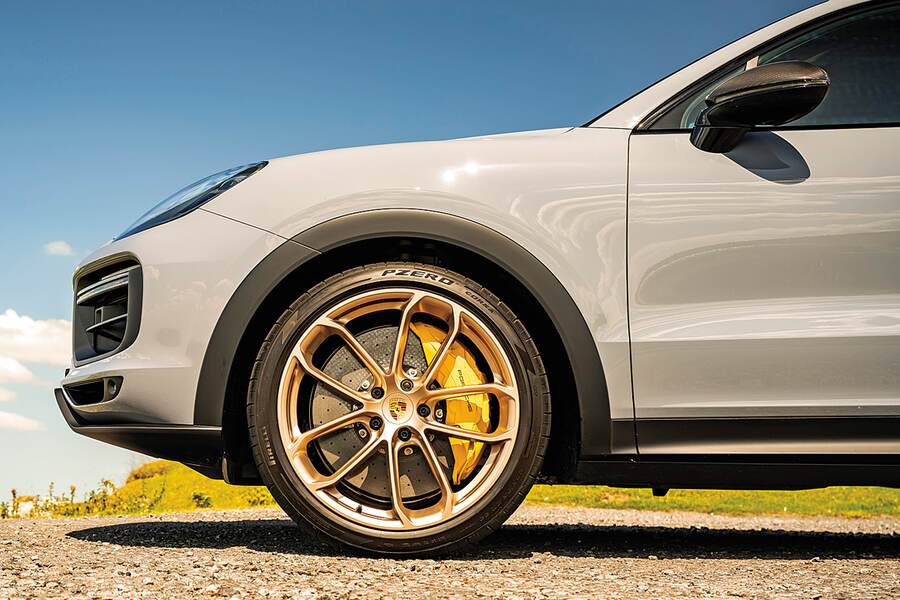 That opportunity arrives a week later. With the SUV done with its exhibition duties, it’s now possible to take it for a proper drive on familiar testing roads around Porsche UK’s Reading headquarters. Reacquainting myself with it, the changes are all very evident. It’s not necessarily the engine’s greater potency that defines it, but its keenness and responsiveness. There’s an enthusiasm for revs that makes it feel a bit more natural in its aspiration, despite its clear, and greater here, forced induction via those bigger turbos.

The lack of inertia from the engine and that eagerness naturally manifest as greater speed across the entire engine rev range, but it feels particularly potent above 4,000 rpm and remains so up to and around the 6,800 rpm redline. Peak power comes at 6,000 rpm, but it’s underpinned by a torque foundation that delivers maximum twist between 2,300 rpm and 4,500 rpm, giving it enormous flexibility, regardless of which of the eight-speed automatic’s ratios you’re using.

That transmission shifts with a keenness that matches the engine’s quick responses, though similarly, if you’re happy to leave it to its own devices, then it’ll almost telepathically pick the correct ratio for whatever situation you find yourself in. It’s best shifted via the steering wheel paddles, though, because the Turbo GT genuinely lives up to its billing as the most thrilling, engaging driver’s car in the Cayenne lineup, and doing so allows you to better enjoy the more rousing sounds created by the V8 and its unique titanium exhaust. 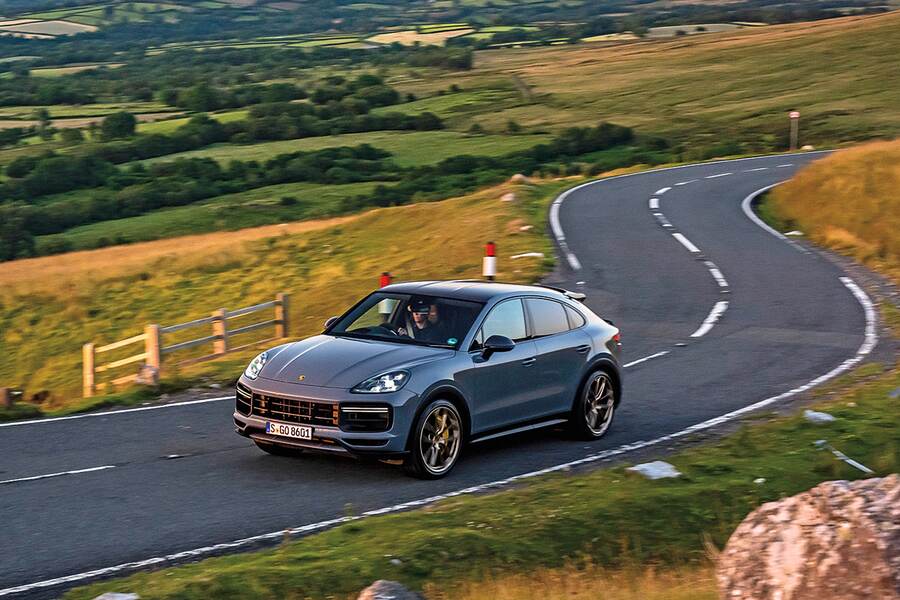 While the Turbo GT’s big power output creates intoxicating sounds and acceleration, its chassis revisions signal the real changes. As a result, this SUV exhibits agility that’s practically otherworldly for something carrying so much weight. It’s the very definition of shock and awe in relation to power and capability, yet it’s underpinned by intelligence and delicacy in its chassis.

That’s particularly true with regard to how it steers. There’s a deft lightness to the steering; your movement of the wheel translates directly to a very quick turn in at the front axle. The tuning of the rear-axle steering is such that it follows with such faithfulness that you genuinely need to recalibrate how and when you turn in to a corner. It feels more hot-hatch in its eagerness to turn in than SUV, and powering through and out of the corner gives it a rear-biased feel that’s as entertaining as it is exploitable.

What’s doubly impressive is all this agility, engagement, and feel is available at normal speeds, too. The Cayenne Turbo GT’s delights are also served at normal speeds, making even low and moderate pace driving more enjoyable. There are compromises, not least the fact that its ability is such that however much fun it is at sensible speeds, you’ll be wanting to scratch an itch at higher ones, though they’re slight and worth it. 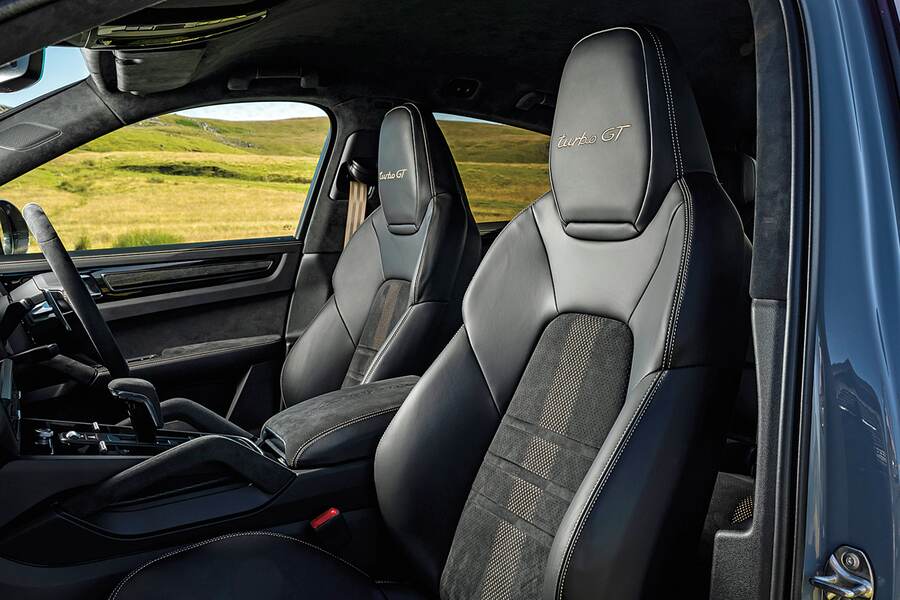 In anything other than Normal mode, the suspension on anything less than glass-smooth surfaces begins to be troubled by the tarmac beneath it, losing its otherwise incredible composure and decent ride comfort. However, given the size of both the wheels and tires and the contact patch they’re delivering, in tandem with the suspension’s sharper focus and greater detail, that’s not so much a complaint as a compliment. And the massive 440-mm (17.3 in.) front and 410-mm back (16.1 in.) brakes offer stopping power that’s greater than the engine’s ability to gain speed; the pedal is always confidence-inspiring, which is no bad thing given this machine’s size!

The Cayenne in any form has always surprised, yet this version especially delights. Porsche’s attention to detail, focus, and determination in chasing a lap time yielded something extraordinary here indeed, however pointless that measure might actually be. 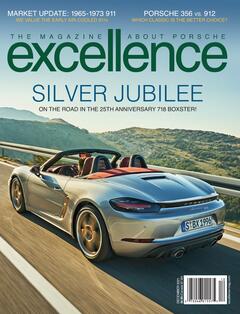