Win on Sunday. Drive on Monday. 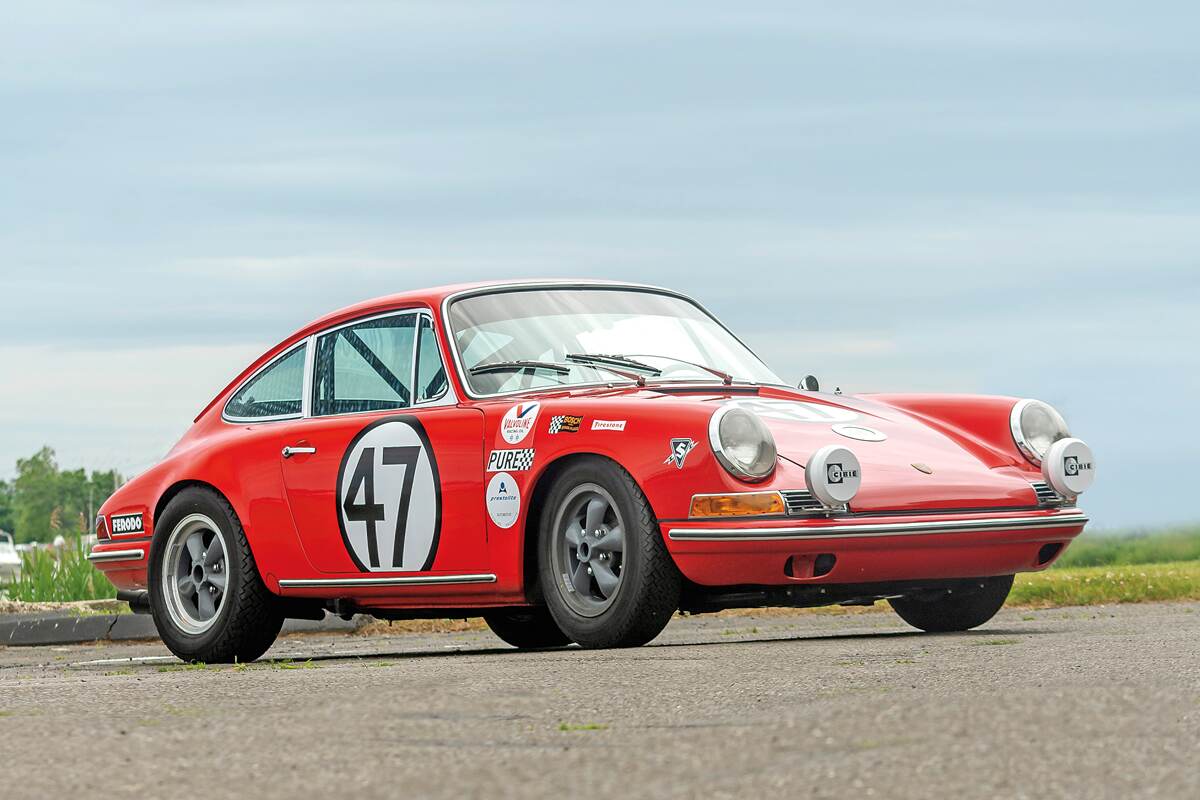 It’s the dream of many: Go to a Porsche dealer, buy a 911, and go racing in big-time events, like the 24 Hours of Daytona and 12 Hours of Sebring. Of course, that’s not something you can go out and do so easily anymore, but back in the 1960s, you had that chance. And that’s exactly what Florida native and sports car fan Dr. Harold Williamson did. A successful orthopedic surgeon who had gotten his pilot’s certificate at just 17 years of age, Williamson went on to join the Air Force after the bombing of Pearl Harbor. He became a flight instructor in B-25s. Later, he was sent to Italy, where he flew reconnaissance missions in a P-38.

After World War II, Williamson still had a need for speed. Porsches caught his attention, so he went to Brumos Porsche in Jacksonville and bought himself a brand-new 911. This particular Porsche (chassis 301709) rolled off the assembly line in May 1965 finished in Signal Red with a black leatherette interior and equipped with Porsche-crested hubcaps, tinted glass, and a Webasto gas heater. Williamson competed in several regional events in this 911, which doubled as his daily driver.

Then there was George. George Drolsom inherited the farm he grew up on in Sandwich, Illinois, but he loved cars so much that farming became a sideline and eventually an afterthought. While at university, Drolsom worked part-time at a Porsche dealership, which started his long career with the marque and his lifelong love of auto racing. He kicked off his racing career in a 1955 Ford Thunderbird running in SCCA B production with the number 34 on the side, in honor of the state road that ran past his farm. However, he soon realized the T-Bird wasn’t cutting it and switched to a more effective weapon: a Porsche. He started in a 356 Speedster, then found his way into a 550 Spyder and other machines from Zuffenhausen. 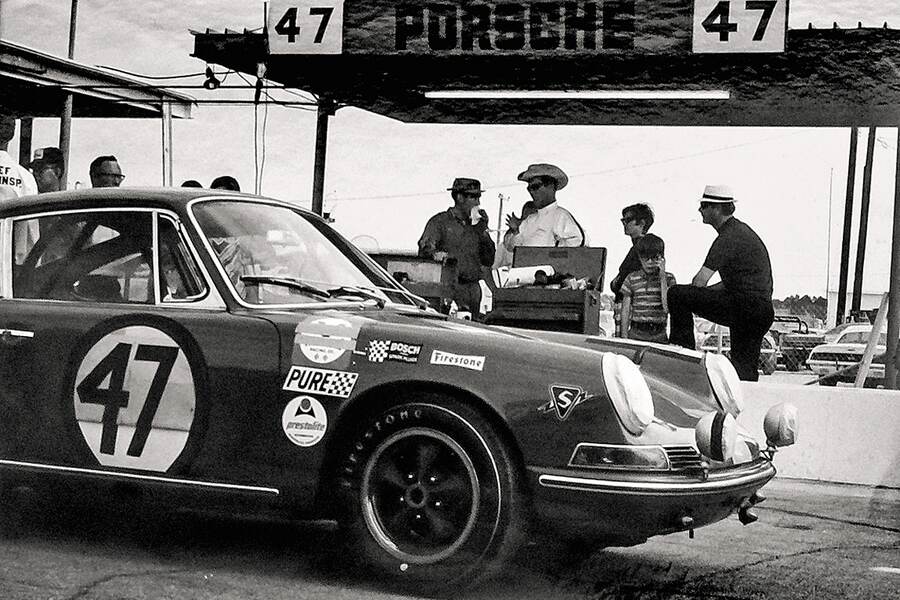 Drolsom’s need to be around cars was so strong that he left the farm in Illinois and moved down to Jacksonville, Florida to become the first non-German factory service rep for Porsche in America. He became the liaison between the factory and Brumos Porsche. This put him behind the wheel of a 904, which he co-drove with Brumos owner Peter Gregg in the 1966 24 Hours of Daytona. Drolsom then contacted Brumos customer Dr. Williamson and offered a plan for the following year’s Daytona 24.

Drolsom convinced Dr. Williamson to enter the 1967 24 Hours of Daytona as a privateer and run his 911 in the new 2.0-liter Touring class. That category allowed the standard 911 but not the more potent 911S. Drolsom would be the co-driver and would do the race prep with the help of Fred Clark at Brumos. With Williamson’s OK, the interior was stripped out, and Porsche Sports seats and a roll bar were fitted. Then, the engine was rebuilt, a new exhaust was installed, the gearing was changed, the fenders were flared, and wider American Racing wheels with larger tires were mounted.

The gentlemen were now ready to go racing. The plan was simple: One car, two drivers, some friends to change tires and add fuel, and…no factory support. 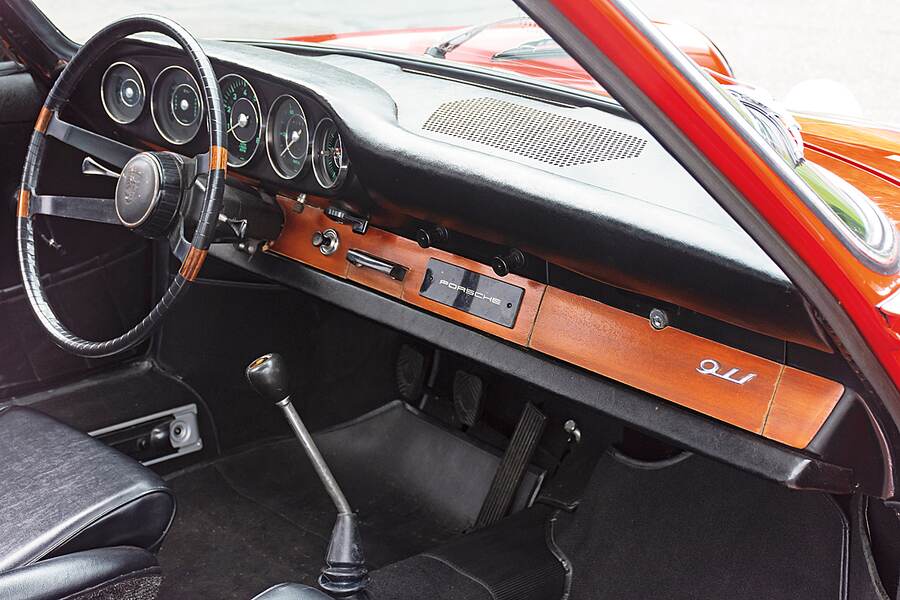 They were not only taking on fast Mustangs, Volvos, MGBs, and Triumphs. They were also on track against big-league factory racers, like Ferrari 330 P3/4s, Porsche 910s and 906s, and Ford GT 40s. At the end of 24 hours, Williamson and Drolsom were 10th overall and had won their class. Perhaps most remarkable of all, after the post-race festivities concluded, Dr. Williamson loaded up the winning Porsche and drove it home to Tampa.

Later that year, the doctor entered his 911 in an SCCA 12-hour race at Daytona, finishing third in the Touring class. In 1969 he was back at the 24 Hours of Daytona with Drolsom co-driving. The pair finished second in class and eighth overall. At the 12 Hours of Sebring that year, Williamson and Drolsom took a third in class and 29th overall in the little red Porsche. Not long after, Williamson sold the car to Tampa mechanic and racer Dave White, who kept the car for many years. It then changed hands once more and spent time in a private collection before eventually heading to auction.

From One Racer to Another

Murray Smith’s introduction to auto racing came in a rather roundabout way. His father—who died when Smith was quite young—was an excellent golfer. In fact, his dad used to hit the links with a gent by the name of Prince Birabongse Bhanudej Bhanubandh—Prince Bira for short. Bira was also a race car driver. 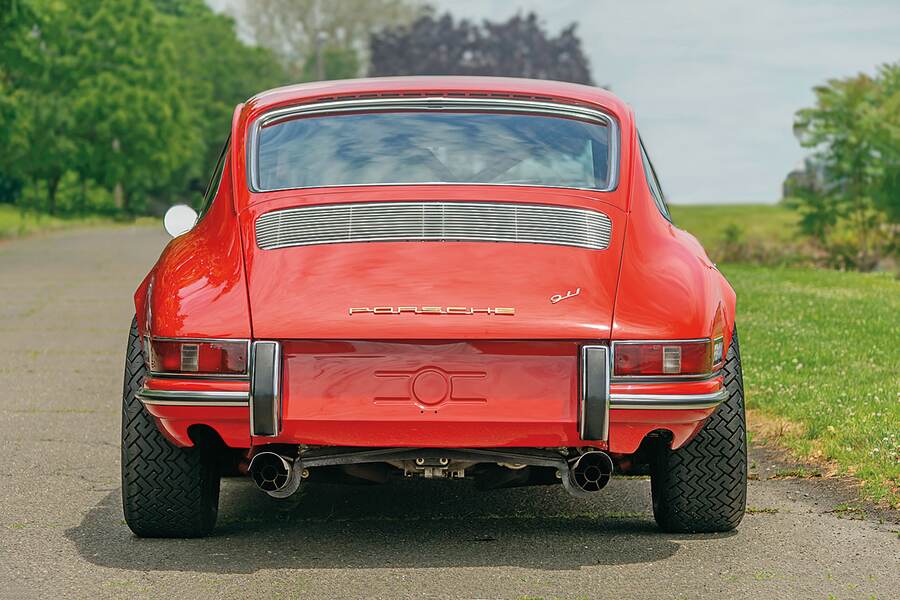 After his father died, Smith wrote a piece for his school’s magazine about Bira. A week later, he got called in by the headmaster; school director Mr. Townsend was very impressed with the article, and he wanted to take young Smith to an automobile race. He was told to be in front of the school at 10:00 a.m. on Saturday morning. At the appointed hour, a Rolls-Royce with Mr. Townsend and a bunch of his chums pulled up. They whisked Smith off to Silverstone, and he immediately became hooked on racing.

At the age of nine, Smith couldn’t have a car of his own yet, but he read everything he could about them. He also lived just up the road from the Frazer-Nash factory. There, he got to know the chief mechanic, who very kindly let him have a look around the shop. When he went off to university, Smith worked part-time at a second-hand sports car shop called Performance Cars and at that time picked himself up an Austin Ulster. He regularly drove that Austin to Goodwood and had his very first race in it at Brands Hatch. Then, from the Ulster, he moved on to a Mini Cooper S.

When Smith started his advertising career in London, he got to know a really top creative guy named David Abbott. Abbott had a black 911E that Smith thought was the perfect ad-man ride, and when Abbott decided to move it along, Smith bought it. During this time, Smith was rallying and running hillclimbs throughout Europe in a variety of cars. 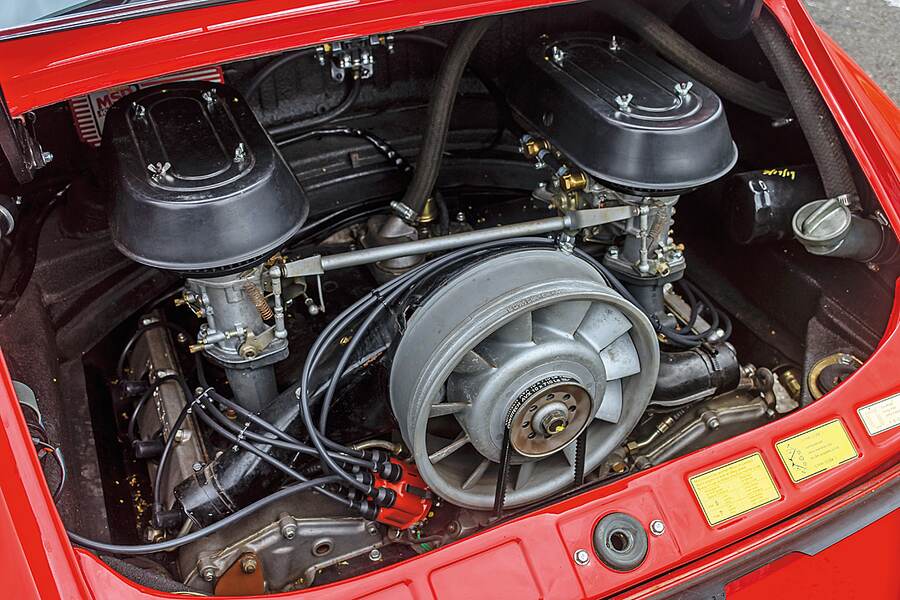 Smith later moved from the UK to the U.S. Once he was Stateside, he bought an Alfa Romeo 2600 Sprint modified by Carlo Facetti from Stan Nowak. The latter introduced him to the world of the Vintage Sports Car Club of America (VSCCA), where Smith got drives in many of the members’ cars.

On the other side of the pond, Smith drove many of car collector Lord Anthony Bamford’s machines. He was the hot shoe of choice for many collectors, as he tended not to hit things very often. He was even a hired gun in the Firehawk series in a works Chevy Camaro. Smith would also go on to run Alain de Cadnet’s racing team. With Smith at the helm, the team won the 1,000 Kilometers of Monza and the 6 Hours of Silverstone in 1980 and came home fifth at Le Mans in 1977.

All at the same time, Smith got very involved with the marketing of historic motor racing. Virtually no one before Smith had seen the full value of this type of motorsport. He was instrumental in getting Chrysler and Rolex involved in the vintage motorsport world. It was an environment of high-net-worth individuals, just what sponsors wanted. For another client who wanted that kind of exposure, Smith created the Louis Vuitton Concours in Rockefeller Center.

Since that 911E, Smith has owned a few other Porsches: two Carrera 2.7 RSs, a 3.0 RS, a Turbo prototype that became an RSR, a works RSK, an RS 60, the Jean Behra Formula Two car that is now in the Collier Collection, a 956, and a 962. He also raced several 917s. So there is a definite affinity between Smith and the German marque.

When Smith heard Dr. Williamson’s early 911 racer would be crossing the block at the Gooding & Company Monterey auction, it piqued his interest. Smith is not one to buy cars at auction, but the images in the catalog and the write-up drew him in. He checked the car out and saw it was the real thing and still in the same configuration as when it raced back in the 1960s. He took a deep breath and prepared to do battle on the auction floor, where he came out victorious.

The early 911 race car checked all the right boxes. Smith is drawn to early cars from a marque. Still in his collection is a split-window 356, so the early 911 is the natural progression. This 911 had a history Smith could relate to. It was the type of racing he started out in: the “Run what you brung” mentality. And it’s a pretty, purposeful package wrapped up in that iconic 911 silhouette. It was meant to be. 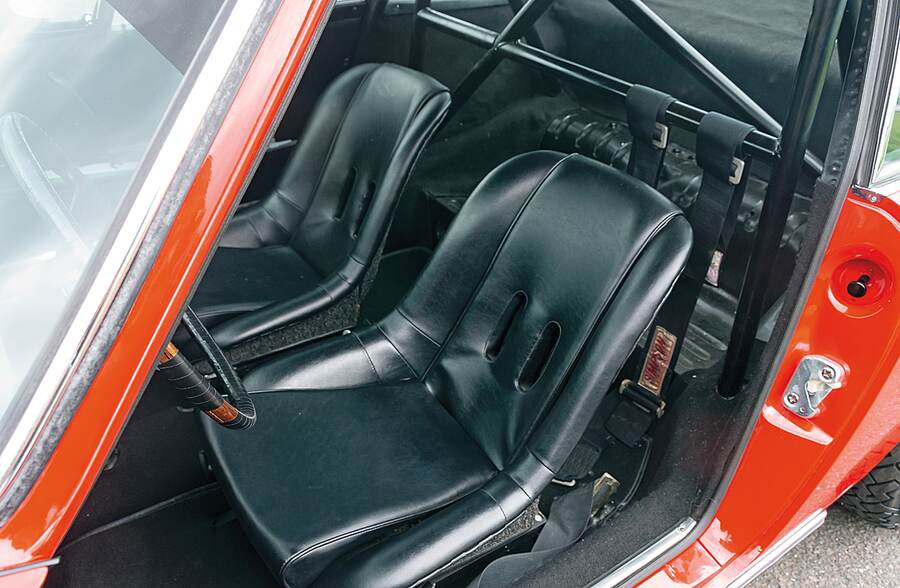 Once inside the racer, you’re in the familiar surroundings of a five-gauge cluster dash, just like any 911 made through 1998. The race modifications to the interior are minor. The rear seats are gone along with the carpeting; in their place is a welded-in roll bar. Then there are Porsche Sport seats with four-point racing belts. The only other concessions to racing are the electrical tape on the steering wheel for more grip, black paint on the upper portion of the windshield, and a radio delete plate.

Turn the key, and the glorious noise that erupts from the pipes is a sound many modern Porsche owners likely wish they could re-create. The clutch was not swapped out for a racing version, so it’s still light and easy to work with. The 901 gearbox still has a connection to motorsport, though. Like racing gearboxes, the 901 has a dog-leg first gear down and to the left. That’s because once you are underway, you no longer need first. And once you’re at speed, you are in control of a light, agile, free-revving sports car. Being an early short-wheelbase 911, you’re wary of its tendency to snap oversteer. Even so, you worry less about its handling quirks as you get more laps under your belt.

This ex-racer is everything Smith loves. Will he drive it? Most definitely. Will he race it? There’s an excellent chance he will. Will he love it? Damn right! So you have three men: a doctor, a farmer, and an ad executive. Three people from different walks of life and different parts of the world. People that probably would never have anything in common except the love of one special German car. That’s the power of the Porsche 911. 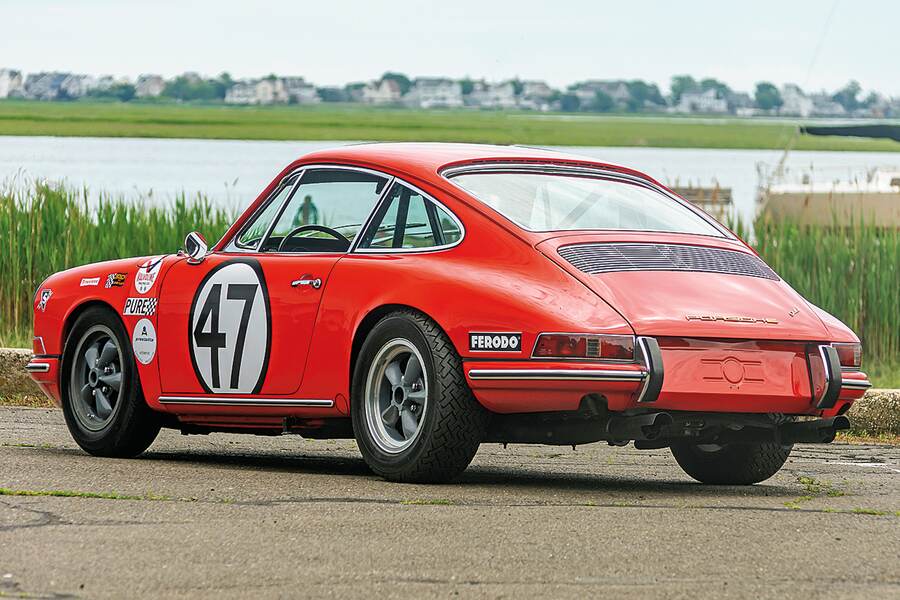 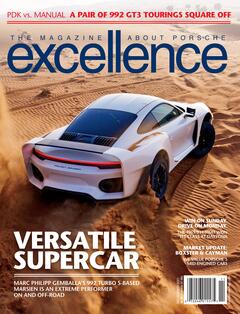