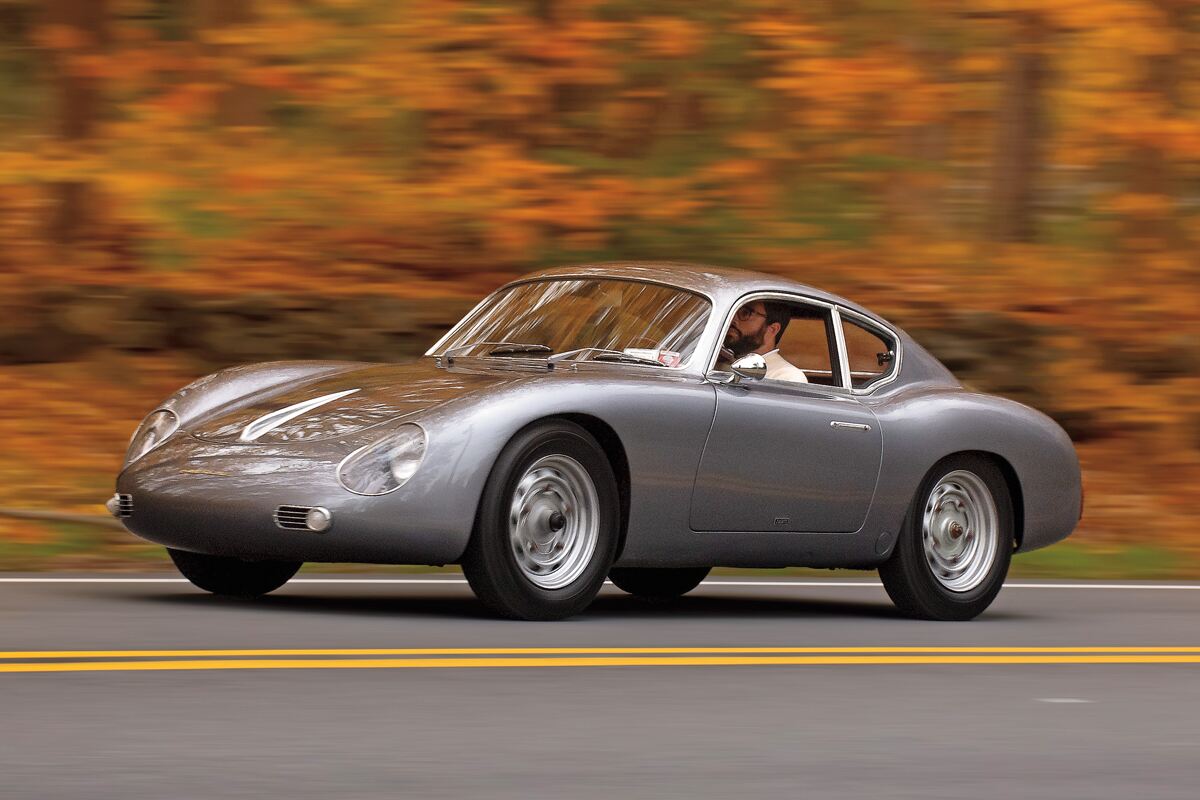 While in Basel, Switzerland for work in 2016, Ben Clymer discovered that the Italian coachbuilder Zagato was having an exhibition at a nearby automotive museum. The people at Zagato knew of Clymer and his company and sent a representative up from Milan to give him a tour of the show. At that point he asked if Zagato would be interested in creating a new body for his Ferrari 456M. He was told such a project would be very tricky and would cost over one-million Euros. But the team at Zagato learned he also owned a Porsche 356 and a Lancia Flaminia. They asked Clymer, “What if your 356 and Flaminia had a love child?”

They went on to explain that Zagato had an unpublicized project called “Sanction Lost”. It was a design done in 1959-1960 of a Zagato-bodied 356, but it was never built and can now be thought of as the missing link to the four-cam Porsche Abarth 356. The project moniker came from the classic Sanction II and Sanction III cars built by or with their original manufacturers’ blessing in modern times. Since this Zagato 356 coupe was designed but never produced in 1959, it is a Sanction car classified as “Lost” since it is not the second- or third-run version made through the years. Nine Roadsters and nine coupes of these new old-cars would be constructed in total.

It had the hips of an Aston Martin DB4 GT Zagato, the front end of one of their Alfa designs, and the rear end of an Abarth 356. It was all Clymer’s favorite cars rolled into one! 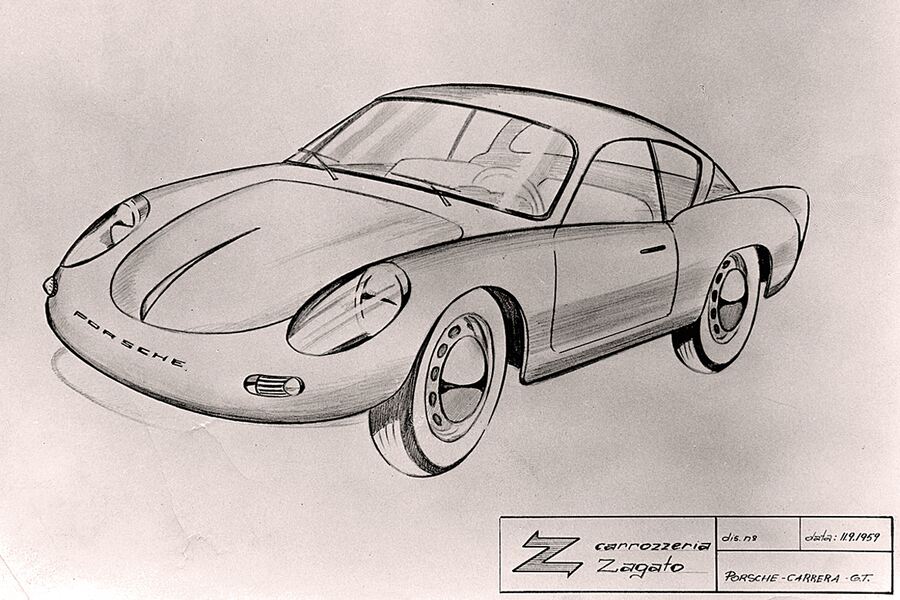 A Passion for Porsche & the Unique

When Clymer was five years old, he fell in love with a Volkswagen: Herbie from “The Love Bug” film. He became obsessed with Beetles. So great was his passion that his mother created a VW Bug Halloween costume for him when he was six. Clymer’s other great love was watches, which started with an Omega Speedmaster that his maternal grandfather gave him as a youngster.

Clymer went off to university in Syracuse, New York, where he studied business and computer science. After graduation, he worked for a firm as a management consultant and later found himself at UBS bank. They offered Clymer the world: an excellent salary, bonuses, a great life. But this was around 2008, just as the financial crisis was unfolding. The banking world changed big time, so all the promises of a fancy life disappeared. Clymer still had a job but without the perks. He wasn’t laid off like many, but he was told he would have nothing more to do but come in each day and not get into trouble.

He soon started cruising the internet at work, but almost everything was blocked—except watch sites. To help pass the time, he started writing about watches. Soon he was getting noticed, left the bank job, started writing about watches, and kept up with his watch blog, Hodinkee.com. He then went back to school for journalism, where his professors were stunned to learn he was paying his way with his blog. 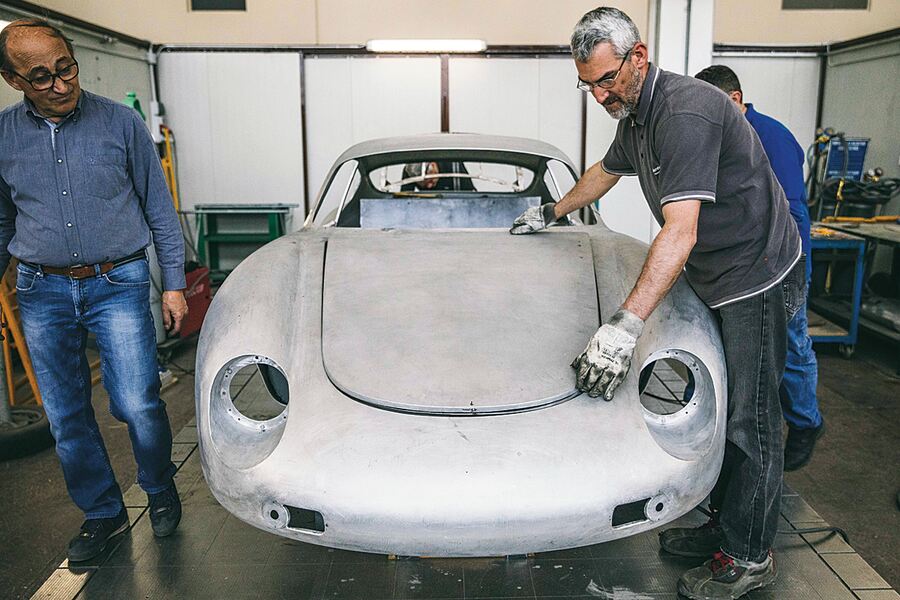 Hodinkee became his business, but his other love was calling to him. He financed a Smyrna Green 356 that was delivered to him in the parking lot of the Short Hills Mall in New Jersey. There was a fly in the ointment, though. Clymer didn’t know how to drive a car with a manual transmission. He had a general idea, but he had never put it into practice since he never learned when he was younger. So he jumped in the deep end and learned to drive stick on his drive home. Not long after, he bought a 1965 911.

Though the 356 and the 911 were Clymer’s great loves, he lusted after something more unique. A Vignale-bodied Maserati 3500 was the goal, but it was also out of his price range. He then set out to find a Touring-bodied Lancia Flaminia, a machine similar to the Maserati. Through Santo Spadaro of Dominick European Car Repair in White Plains, New York, Clymer was introduced to a gentleman selling a Zagato-bodied Flaminia. He saw it, he drove it, he loved it, and so he bought it. This sent Clymer off in a whole new direction: He fell in love with the coachwork of Zagato.

Enter modern-day Zagato and their Sanction Lost 356 pitch. Clymer had to have one, but, of course, it was going to be pricey. He told them he was a young guy and it would be a stretch for him financially. Zagato told him “no problem” and that since it’s going to take a while to build, he could pay as he went along. They came to terms and the expected 18-month build—in true Italian style—turned into a three-year process. 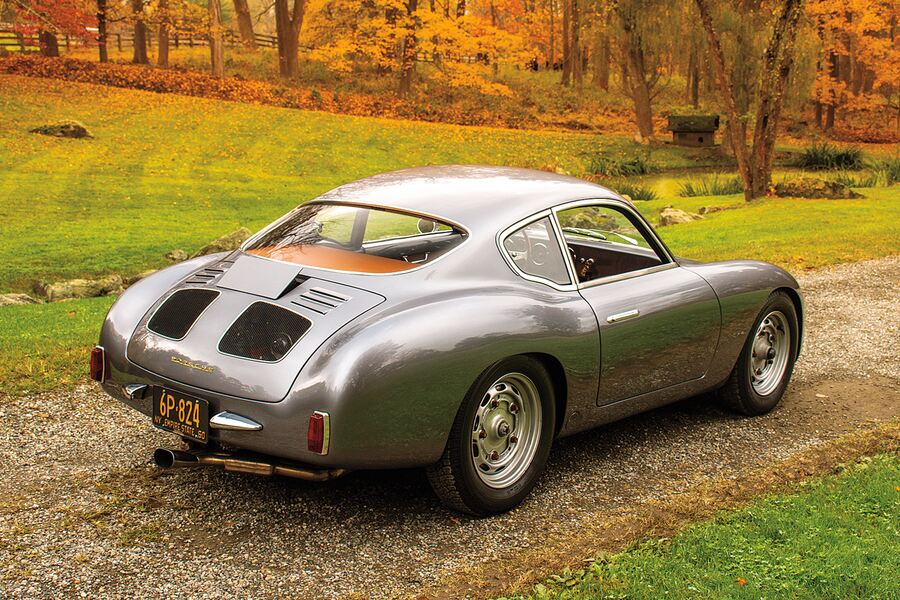 Clymer wanted to know how involved he could be in the creation of his machine and was told, “as much as you want to be.” He chose a color he saw on a Zagato-bodied Fiat 8V: Grigio 8V, similar to Alfa Romeo code 696A, Grigio Nurburgring. For the interior, he chose a light pumpkin-hued leather. The car is very bare-bones, so it has no radio, no air conditioning, and no wood veneers, just the basics, like headlights and windshield wipers. But Clymer did help to pick out the donor 1960 356B that serves as the basis for the machine you see here.

Some of the other Sanction Lost builds used the 356C platform. But Clymer wanted to use what was intended when Zagato penned the original design in the late-’50s. It’s all 356 underneath restored, but 356 tech. The body is done the way the coachbuilder would have done it in period; no computers, no production lines, and all hand hammered and shaped by artisans. The original Sanction Lost design had fins, but that was one aspect Clymer chose not to include. One of the things he did want to add beyond the original design, however, was seatbelts.

After the build was completed, the car was sent to its new home in the U.S. Upon arrival, minor tweaking needed to be done to the engine and transmission, like many fresh restorations require. That was sorted out by Chris Zanine of Rennsport in Bedford Hills, New York. After that was taken care of, Clymer shipped the car off to Los Angeles and drove it up the California coast to Pebble Beach, where it captured a great deal of attention. From there, Clymer and his girlfriend headed north to Bolinas, each with a duffel bag behind the seats. It was the perfect 1,200-mile break-in run for his new-old 356. 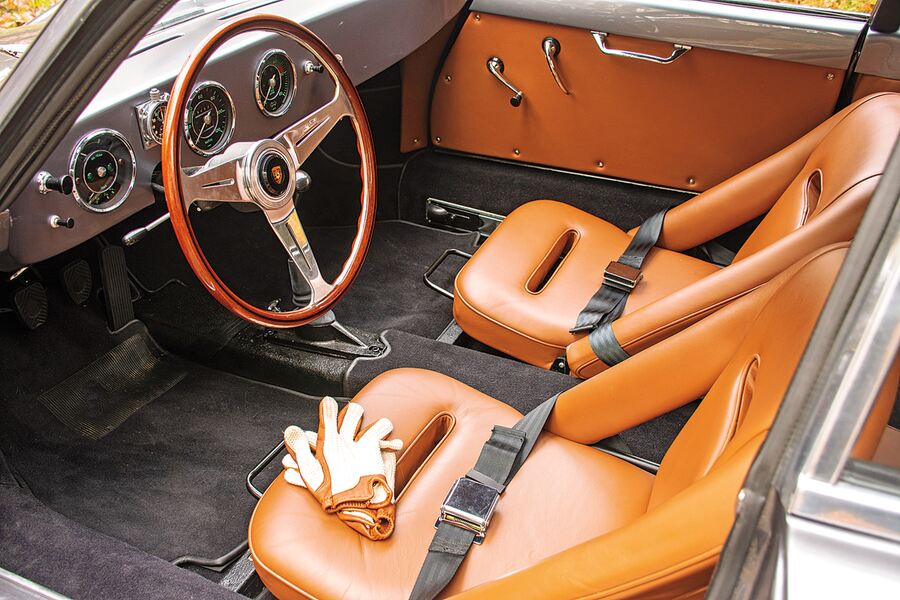 On return to the east coast, Clymer and Zanine decided to switch the car over to Weber carburetors. The car wasn’t running poorly, but Zanine told him it would be a lot easier for him and Clymer in the long run. It wasn’t set in stone with Clymer that the engine had to be configured exactly as it was in period, as this car really didn’t exist in period. To be fair, how many 356s haven’t been converted to better performing Webers? And besides, those lovely carburetors add a little more kick and sound wonderful.

In Person & On the Road

To purists, Zagato’s Sanction Lost 356s are not ‘real’ cars since they weren’t actually built in 1959-1960. To others, these are some of the most beautiful 356s ever made. To Clymer, it’s perfect. But if there had been one made in period, he isn’t so sure he would have ordered this one. He didn’t want a copy or continuation. And if you ask Andrea Zagato and Paolo DiTaranto of Zagato, they will tell you it’s the most beautiful car the company never originally made.

Look closely, and, beside the small badges on the lower portion of the doors, you can spot styling cues you will have seen on other Zagato creations. This machine truly is the link between the 356 coupe, Speedster, and the Porsche Abarth. It may not have been built in the good old days, but it’s fantastic that it exists now. 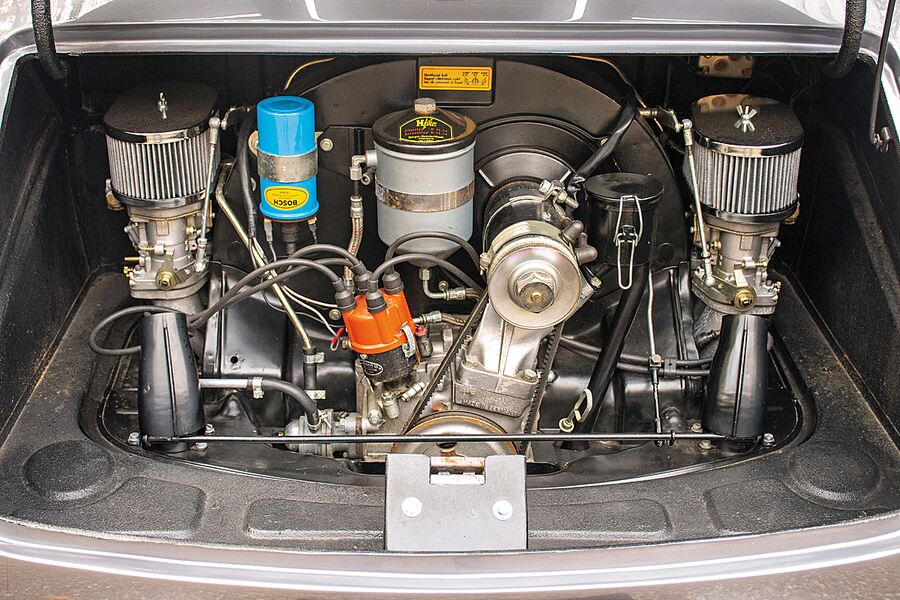 When looking at this car in the flesh, it’s hard to remember that it is still a 356. It doesn’t have the lines of a 356, and it’s a good deal smaller and sleeker. It says Porsche on the nose and tail, which is your first clue. The next is the crest on the Nardi steering wheel (canted at a non-Italian angle) and the three green numeral gauges on the Spartan dash. The seats are not the large cushy ones typically found in a 356 but rather a minimalist flying buttress style that hold you in place with style and comfort. The door hardware is another clue to this little car’s origins. Open the rear deck lid, and you have the familiar sight of a 356B’s flat-four.

It may be the Webers or the exhaust, or some other voodoo, but when you turn the key, the throaty tune that starts playing is a bit more muscular and aggressive than you get from most 356s. Going through the gears is the experience you would expect with a well set up early Porsche: a little vague, but with excellent mechanical engagement. The first thing you notice on the road is the absence of mass. With its size and weight, it stops quicker, accelerates faster, and is more sprightly overall. It takes all the aspects and pleasures of a standard 356 and turns them up to ‘11.’ The only thing lacking is headroom, which is virtually nonexistent.

Even so, this retro-modern classic does beautiful things on winding country roads. Its steering is light and effortless, and it puts you right where you want to go with far greater precision than many people would expect. And the skinny Continental CT22 (165/80R15 87) tires mounted on OE wheels are surprisingly grippy. Put your right foot down, and the Webers open up and take you to sonic heaven. It does everything a 356B does but with much less weight and much more emotional styling. 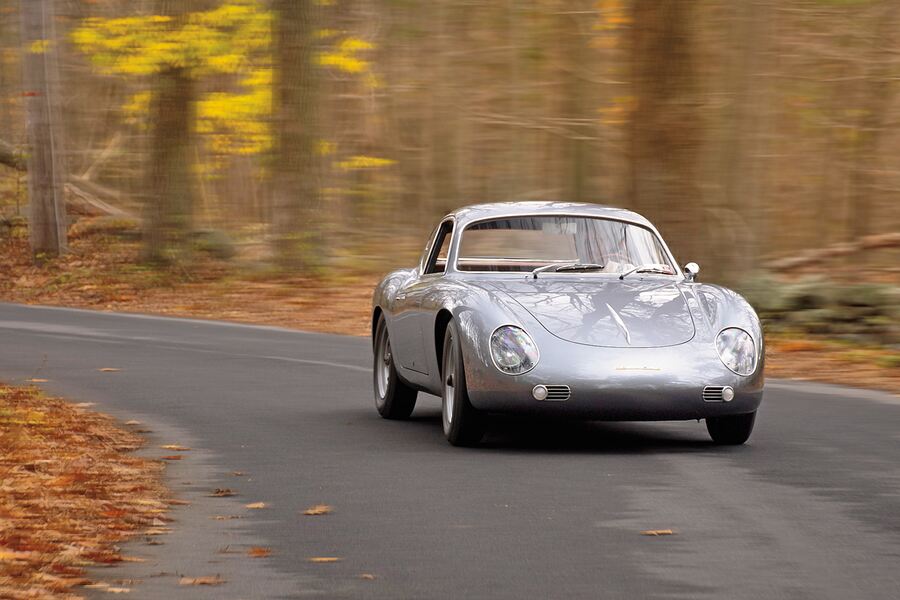 Clymer’s Zagato 356 is with him for life, as it’s the one car he will never sell. He looks at the shiny gray machine and imagines the appearance of it in the distant future. He wants it to have that well-loved and well-driven patina of his Alfa SZ. He wants it to look like a machine that has spent its time on the open road seeking adventure, not some trailer queen locked away in a hermetically sealed box. He wants to have a car that has had a life. 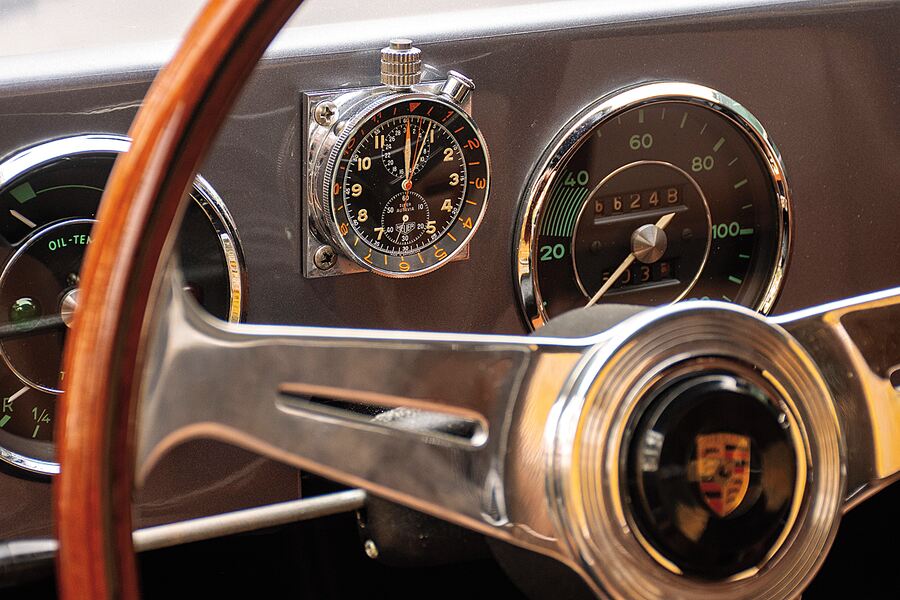 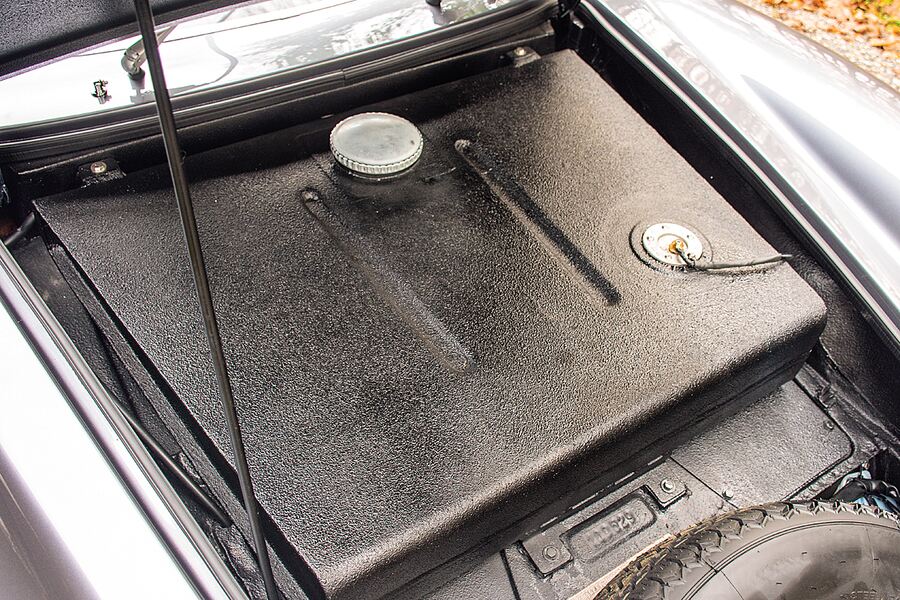 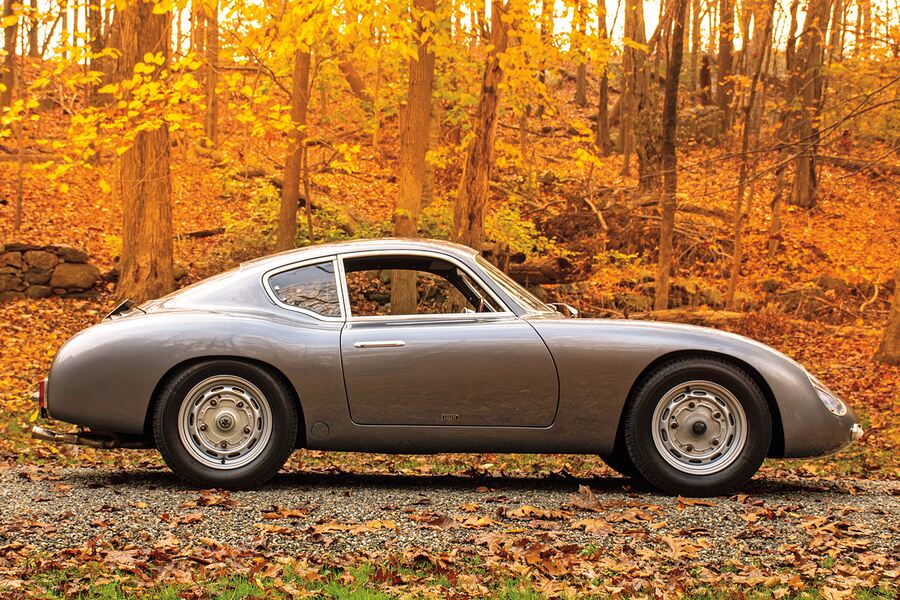 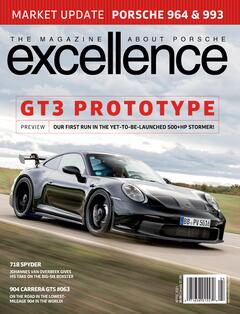