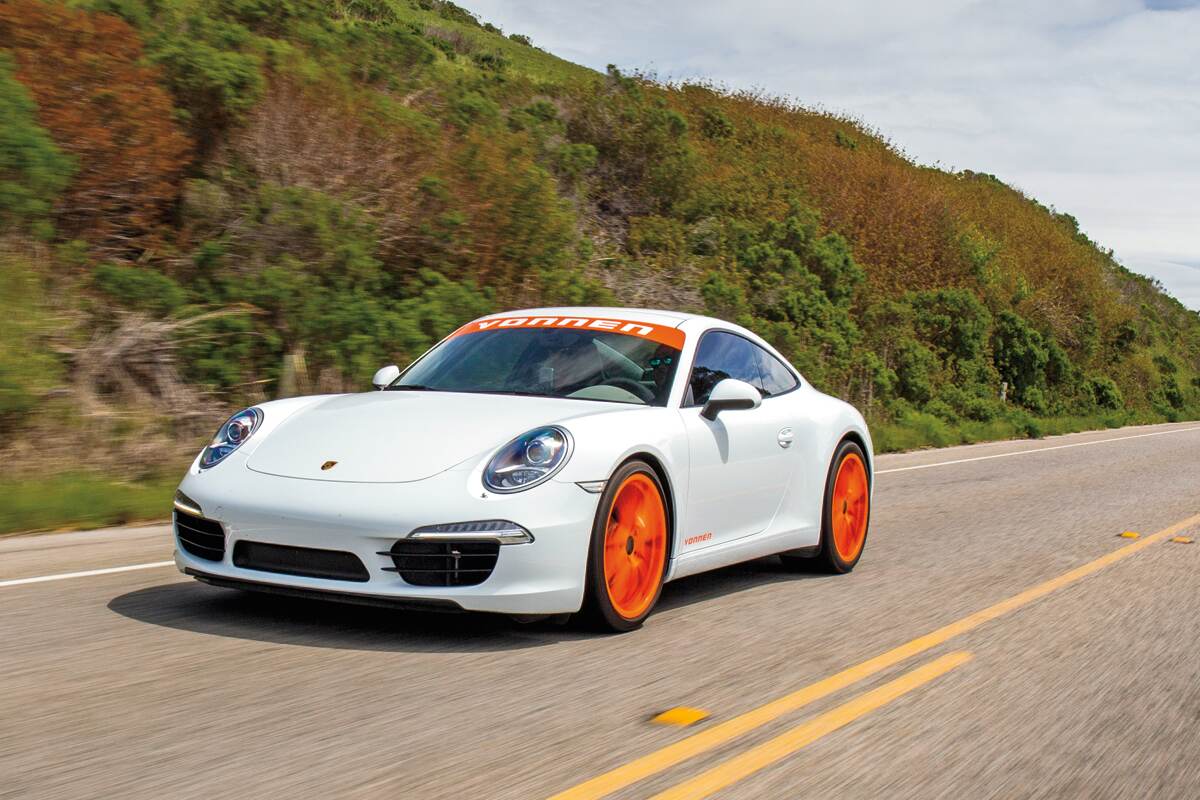 In 2010, a factory 997-gen 911 GT3 R Hybrid made its rounds at various race tracks around the world. I was on track with it twice, once at Laguna Seca and again at the Petit Le Mans. I didn’t drive it, but I did race against it as a competitor of sorts. Since it was a hybrid, that 997 raced in an exhibition class all by itself.

At the time, I drove a Ferrari 458 for Extreme Speed Motorsports in the GT class of the American Le Mans Series. I was amazed at how fast the Porsche was off of the corners at both Laguna Seca and Road Atlanta. That hybrid GT3 would flat out leave me by multiple car lengths on the straights! Its electric motors apparently provided an extra 160 hp for six seconds (for a total of 640 hp).

I recently had the chance to drive a road-going 911 hybrid. But this one wasn’t put together by Porsche. It was built by Vonnen in Santa Clara, California. Anyone who has tried to make a modern Porsche go faster knows that getting additional power out of the drivetrain can be difficult and expensive. So the claim of 150 additional horsepower without going into the engine or adding a motor at the wheels was intriguing. 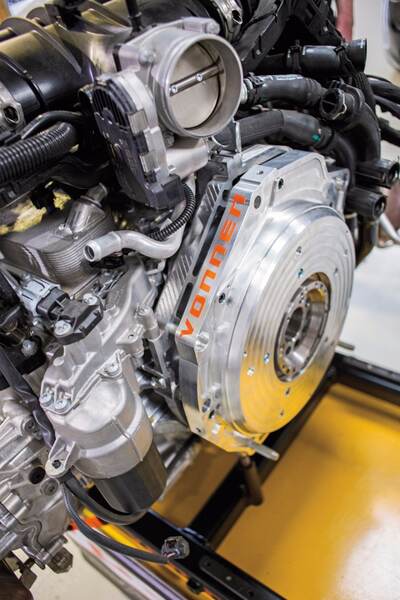 The Shadow Drive motor is compact yet packs a 150 horsepower/150 lb-ft punch!

Vonnen developed a 400-volt hybrid system that it calls “Shadow Drive” over the last three-and-a-half years. It will cleanly fit into 997.2 and 991.1-gen 911s, 987.2 and 981-gen Boxsters and Caymans, and is compatible with manual or PDK transmissions. The beauty of this system is that it is an entirely standalone, seamless, and reversible hybrid system. Also, stating the obvious, since Shadow Drive is an electric system, it doesn’t increase tailpipe emissions.

Shadow Drive is designed to deliver bursts of power rather than sustained mobility. Think of it as an electric supercharger in terms of driving dynamics. The system is comprised of the following elements: an electric motor, a power inverter, a control unit, batteries, a battery management system, a heat management system, and a mobile app.

The motor—which spins at over 9,000 rpm and makes 150 horsepower and 150 lb-ft of torque—takes the place of the factory flywheel, is bolted to the crankshaft, and is sandwiched between the engine and transmission. Meanwhile, the power inverter takes the DC current generated by engine and braking and converts it to AC current to feed the battery pack. Vonnen’s control unit continuously monitors the factory ECU to sync up Shadow Drive with the car. 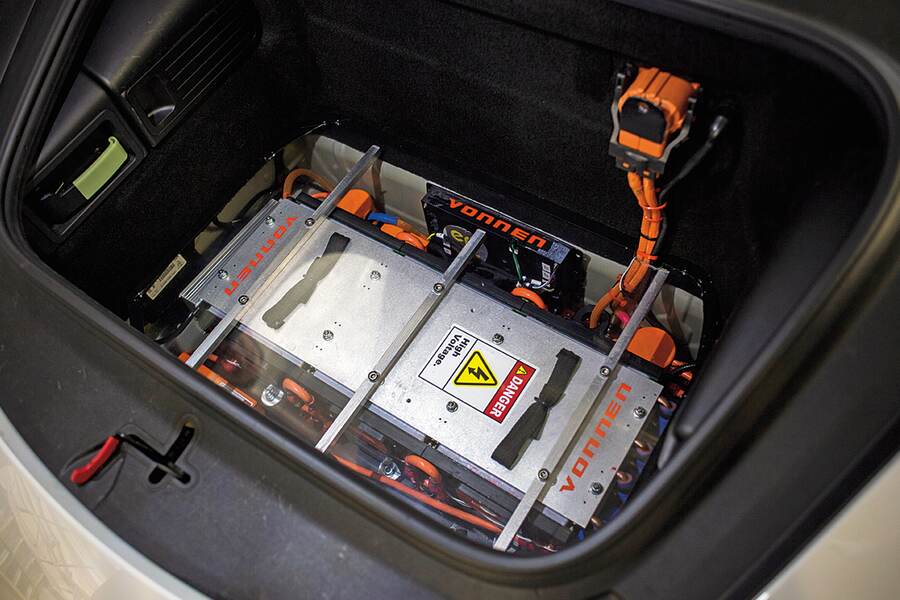 While it takes up a large portion of the front trunk, the battery pack is still packaged well when considering the available space.

The batteries are located in the front trunk and are arrayed in a way best described as 12 connected motorcycle batteries. Their management system was specifically designed for a quick charge and discharge while maintaining low weight and physical size. For heat management, three additional coolers keep the system thermally stable across a wide range of conditions. Finally, the app relays real-time system health, temperature, mode selection (Street, Sport, Overboost), as well as an on and off capability.

Vonnen’s test mule is a base 2013 911 (991.1) Carrera, which came with 350 hp and 287 lb-ft of torque from the factory. With Vonnen’s Shadow Drive, its peak power in Overboost mode is 500 hp. I took this car for the afternoon and headed to the hills above Los Gatos and made a nice loop through the mountains along the coast and back to Vonnen’s HQ.

Using their app, I was able to toggle between the various modes, including turning off the system completely. Just driving around town or on the highway, the system is truly seamless. If you handed the car to an unknowing owner of a base 991.1 Carrera, they wouldn’t have a clue there’s anything different other than more torque in the mid-range. 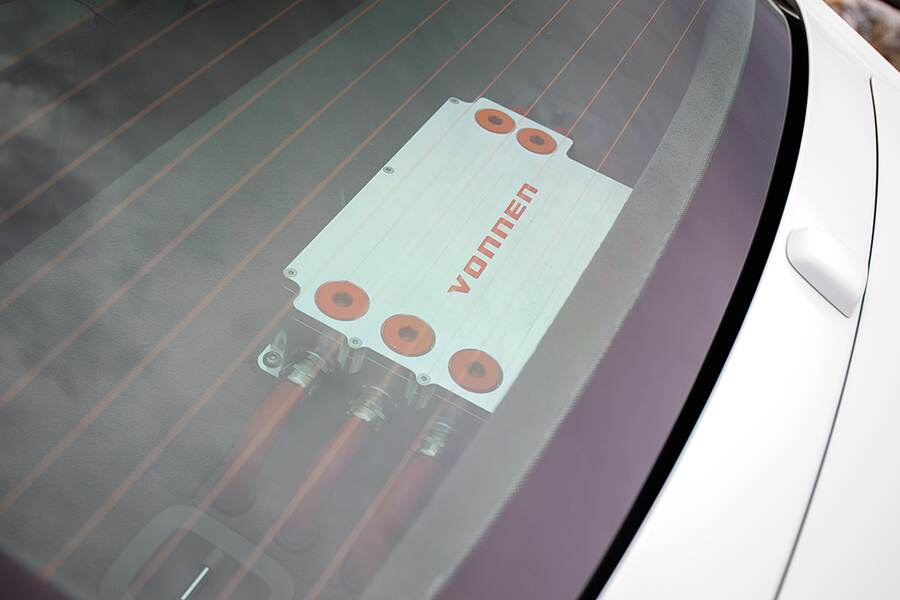 The DC to AC power inverter can be seen through the rear window glass.

Once I reached the mountains, I began to explore full-throttle bursts between corners. In doing so, I really felt the added power and torque. The 2013 Carrera has a pretty peaky engine in stock trim without much torque. Shadow Drive fixes the holes in the torque curve. My brain quickly recalibrated itself to the amount of power that the combined system now had. I began to wonder if the Shadow Drive really was providing the power and torque I was led to believe it had, so I turned off the system via the app. Sure enough, the car felt slow and sluggish in comparison, especially going uphill.

From a drivability perspective, I like how unobtrusive the whole system is. If it were mine, I would change when the additional power is delivered. For example, I really noticed the meat of the additional power only when I was full throttle in Street, Sport, and Overboost. For my driving habits, I would want even more torque at half throttle. Talking to Bill Davis, the vice president of engineering, he said that was an easy change to make. 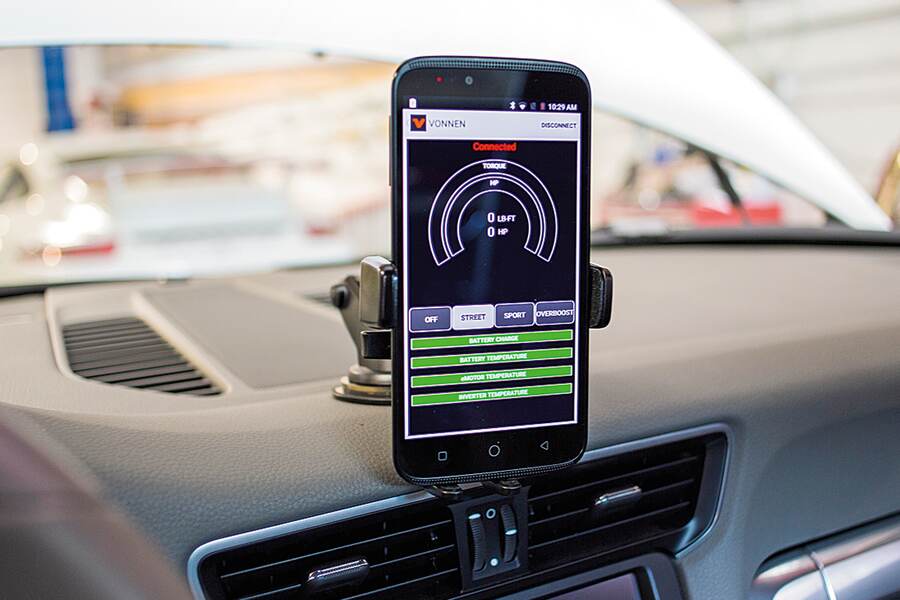 What are the downsides? Like anything in life, nothing is for free. In this case, it’s $75,000 for the complete system installed by Vonnen in Santa Clara. The Shadow Drive also adds a net 170 pounds of weight. I say net because Vonnen is able to remove some heavier OE pieces such as the starter, flywheel, and the stock 12-volt battery. After spending time with the car, it’s clear that Vonnen has worked through the issues both from a packaging and drivability point of view. Having been in professional racing for over 20 years, I can easily see why it costs what it does. Speed and reliability are expensive.

After I dropped off the car, I had a nice chat with Chuck Moreland, Vonnen’s CEO. As we talked, I saw a 911 Carrera 3.2 and found out that they are developing a system for earlier air-cooled cars. On a relative basis, a 150 hp increase on an early 911 will be a massive positive change in driving dynamics. We’re talking about doubling the horsepower of an early 911T! And its a system that can easily be removed and repurposed if you ever sold the car. I’m looking forward to having a go in an earlier car with the Shadow Drive system installed.

Vonnen has created something that they should be very proud of. Shadow Drive works like it was developed by an OEM who had tens of millions of dollars and years to sort it out. The net result is a Porsche 911 that can outrun a Ferrari 458, just like it did 10 years ago. 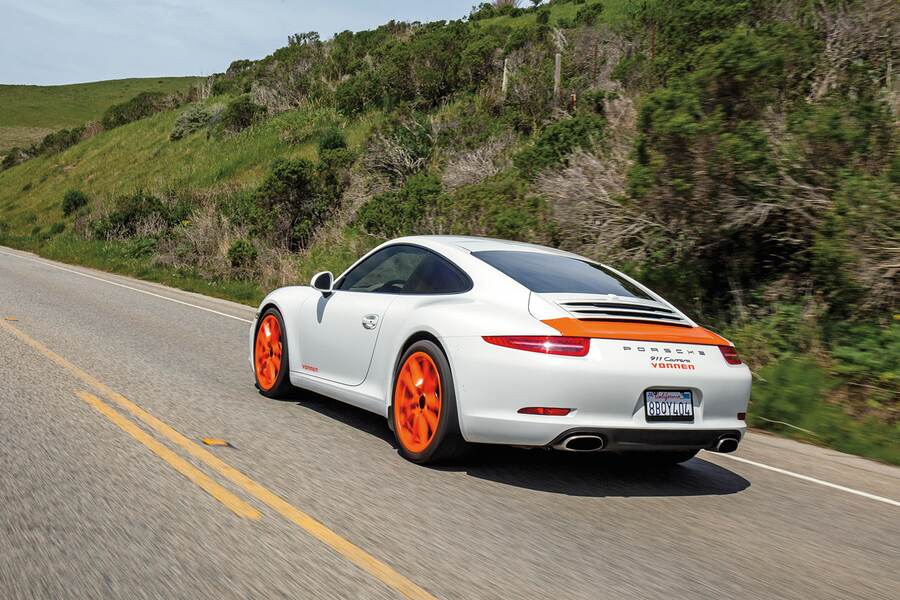 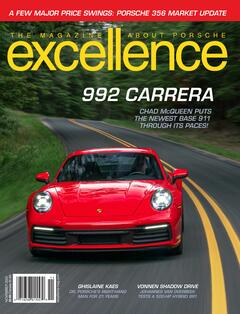