Lord of the ’Ring

Despite not being turbocharged, this 935 DP III still packs quite a punch. 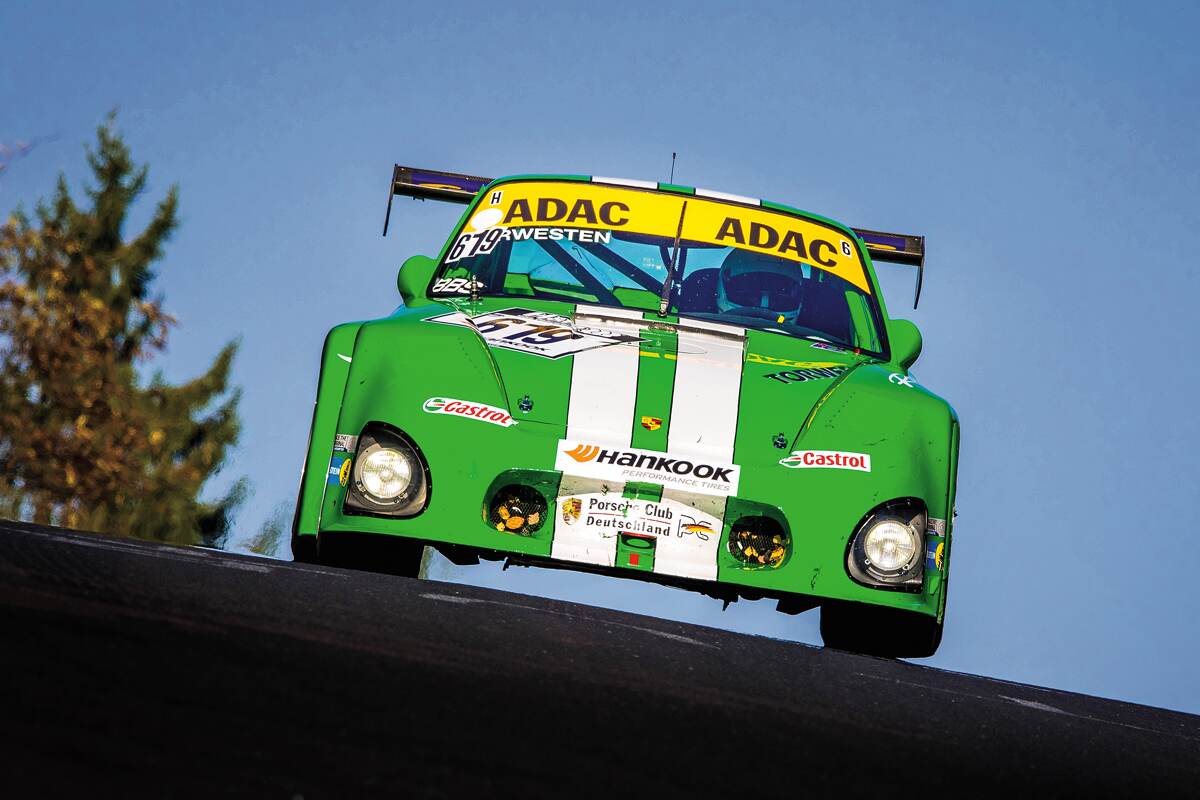 Whether it’s for the road, rallying, or pretty much any form of racing, there are Porsches for every occasion. But what does a 911 built by Ekkehard Zimmermann (the man famous for the glorious Kremer Porsche race cars of the late-’70s and early-’80s) with the sole intention of conquering the legendary 12.9-mile-long Nürburgring Nordschleife circuit look like? I find out that it looks just as amazing as you might think!

Winding through the Eifel mountains of western Germany, the undulating and practically always curving Nordschleife is generally considered to be the world’s most challenging race track. It’s also the exclusive host circuit of the popular Nürburgring Endurance Series (also known as VLN), a championship open to a wide variety of classes.

With such an over-generous length of tarmac available, up to one hundred cars can take the start—so long as they aren’t turbocharged. There is a category for almost anything, from stock Volkswagen Polos, to ex-Deutsche Tourenwagen Masters (DTM) race cars from the 1990s, all the way up to the current crop of works GT3 machines. Homologation rules are also welcomingly relaxed, which is why this monstrous-looking 935 DP III has been racing there for the last two decades. Eighteen of them have been run in the hands of its proud owner, Dirk Torwesten. 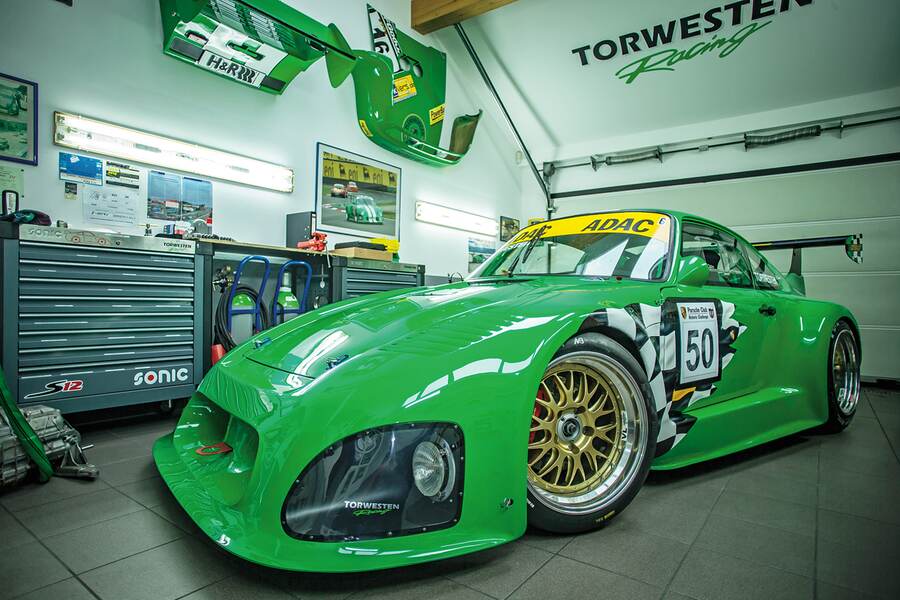 The first 935 DP III was built in 1997 when long-time Porsche racer Jürgen Alzen commissioned a car with a high downforce configuration for the Nordschleife’s near-constant high-speed corners. What dp Motorsport figurehead Ekkehard Zimmerman came up with didn’t just hark back to the 935 Group 5 racing days or suggest just passing regard to the master’s earlier work. Built by the same man, it’s actually a direct descendant of the glorious and iconic Kremer Ks, like the 1979 Le Mans-winning 935 K3. It was also a very effective package, as Alzen won several rounds in 1998 to take that year’s championship. Torwesten’s gorgeous green machine (seen here) is the sister car that Alzen’s friend, Karl Maassen, was allowed to build with body panels made from the same molds.

Our feature car started life as a 964-gen 911 RSR built by Horst Derkum. But when the driver it was made for was injured in an accident, it had to be sold. Maassen bought it and—as a mechanically finished project—took it to dp to have Zimmerman work his magic.

From the bare frame, the whole rear end of the car, from near the end of the roof, was cut away, and flared rear fenders of molded glass-fiber reinforced plastic were added. The front spoiler is a huge single-piece that blends the bumper and splitter with the front fenders and the flat underbody floor pan. 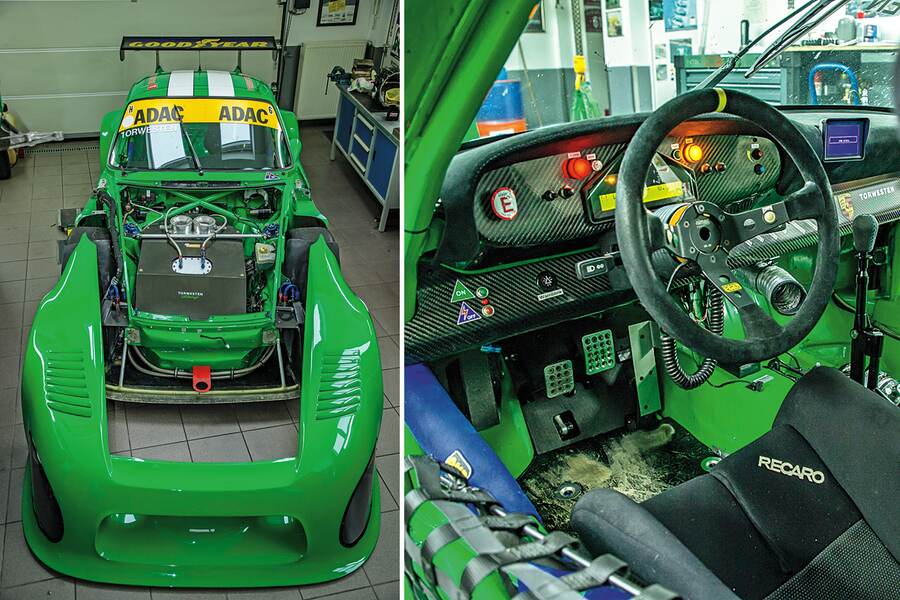 The rear of the roof, as it slopes back, was raised 1.2 inches as a downforce aid, a modification visible if you look closely as the roof gutter line is now in the middle of the rear window line. The air flow then finds the large adjustable rear wing. The widened wheel arches accommodate wider rubber, which also helps with corner grip. [Although this car had a set of Michelins on for our photoshoot, Torwesten prefers to race on Yokohama Advance tires, 280/650-18 on 11-inch split rim BBSs in the front, and 330/710-18s on 13.5-inchers at the rear, which are comparable to what it ran back in the day.]

Power comes from a normally aspirated, air-cooled 3.8-liter 964 RSR engine tuned at Sportwagenzentrum Langenfeld by Michael Kessels. This six puts out 380 hp, which moves the 2,403-lb car pretty well. The transmission is from a 993 RS, as it is both a much easier piece to find than a 964 six-speed variant and has a perfect range of gear ratios.

For the GT2 series in 1998, all parts had to be homologated items, but they didn’t need to be off the same model car. As such, the front brakes and hub assemblies came from a 993 RS. In more recent times, this car was upgraded to a 997 GT3 RSR braking setup with a Bosch Motorsport ABS system loaded with 12 mappings. That is more than enough stopping power, as the Nürburgring isn’t particularly hard on brakes. 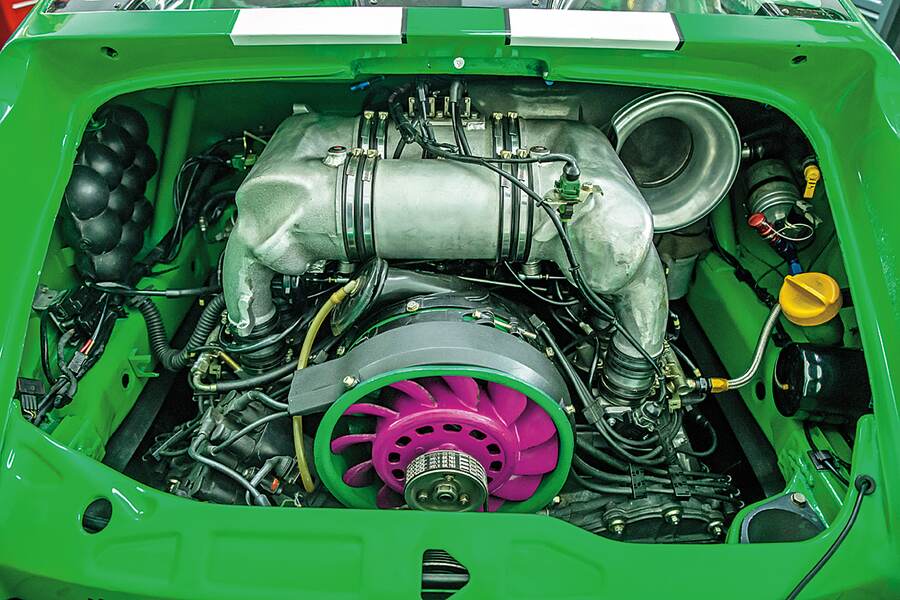 A vehicle’s suspension, on the other hand, is far more taxed there, as the circuit includes a couple jumps that launch cars airborne. There’s also a brutally rough 180-degree concrete slab set at 33-degrees of banking know as the “Carousel.” To cope with this, the suspension was actually more akin to what a rally car needs, so the 935 DP III got a set of bespoke Bilstein shocks. With 0.8 in. of extra bottom end movement and 1.2 in. movement at the top, they have 2.0 in. more travel than cars that race on ‘normal’ circuits. The springs are a set of H+R coils, 60-170 (345 lb/in.) in front, and 120-170 (685 lb/in.) in back.

To fine-tune and tweak a car well enough to get the absolute last tenths of seconds of lap times out of it takes a combination of a talented driver working with an experienced engineer. In the hands of Maassen, an enthusiastic amateur, this car was almost always the second car to Alzen’s. Despite being a runner-up in a straight fight, he had a few second and third-place runs and took home a few wins when Alzen had problems. Maassen raced this machine for three seasons before putting it up for sale.

Dirk Torwesten had cut his teeth racing tuned VW Beetles, which is a bit cooler than it sounds, as the series was on the DTM series’ support bill in the mid-’90s. But when he wanted to step up to a more serious car, he came across this 935 DP III. Going from a VW to a race-winning 911 in the top class of the VLN was obviously a massive step up in both cost and performance, but Torwesten never had any second thoughts. 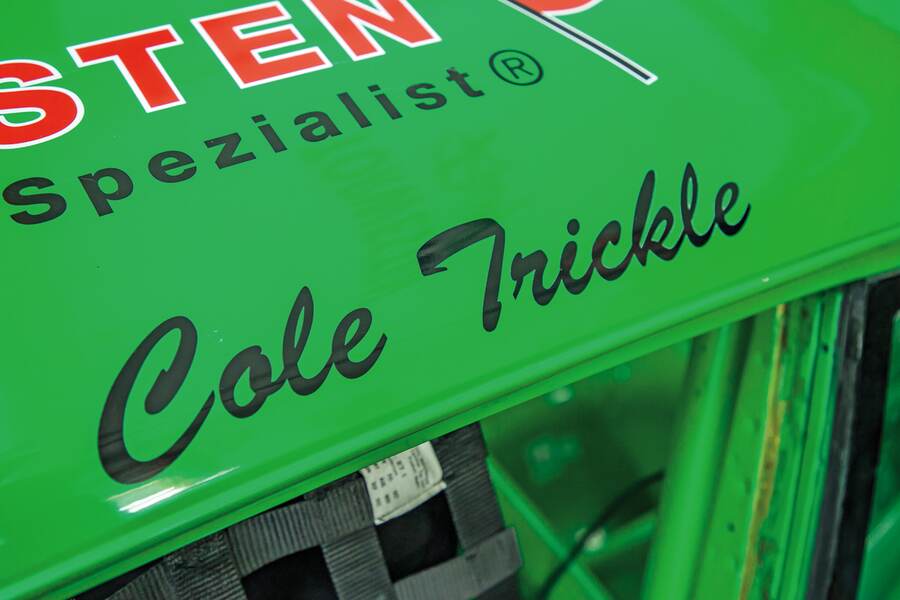 “It’s a real race car because, with the aerodynamics, it has amazing cornering speeds, yet it’s really easy to drive,” he says. Torwesten knows well what a difficult Porsche is like to drive, as he also owns an ex-works prepared Hisaq Competition 997 RSR. “Unless you are a professional racer with a top team behind you, there is absolutely no way you could get the 997 RSR set up properly and be anywhere close to the top guys. The dp 935 is pretty much the complete opposite of that, which is why I like it so much.”

The 935 DP III is so easy to handle that Torwesten’s teenage daughters have driven it at track days, but it’s his son who has truly mastered it. Last year it was his first full season racing in it, but by the summer, he was faster than his father. “Not just at the Nürburgring either, which really, really impressed me, but every track we went to, like Spa, Monza, and Hockenheim,” Torwesten smiles. “Us older guys have the experience behind us, but the younger ones just have the edge that makes them push that much extra.”

Torwesten now mainly runs the car in the open H-class of the Endurance Series, a catch-all class for cars made before 2008 that have less than 6.2-liter engines. This puts him against ex-DTM machinery and a host of highly tuned E30-generation BMW M3s. Obviously, over so many years, the competition has improved significantly, and the car is no real match for today’s field of new, works-built GT cars. From the days when he used to win overall, he now has to check the mirrors and rear camera as much as he flashes the backmarkers to move over. 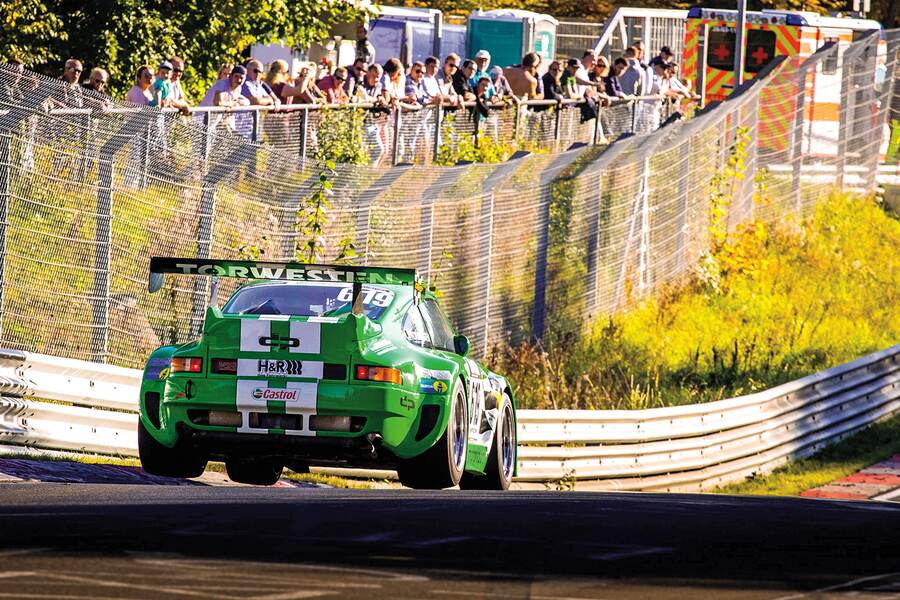 “Zimmerman is truly a genius with downforce as this is an amazing car in the corners so that at even 20 years old, it is just about as fast as anything else,” Torwesten says. “The only thing is that it lacks a bit of power for the straights.” Full speed on the 1.2-mile long Döttinger Höhe straight is 160 mph, which was good for race-winning performance 17 years ago. These days, the current top GT cars can easily do close to 190 mph.

Porsche Club Historical Challenge, Austrias Histo Cup, and the STT (Special Tourenwagen Trophy) are all different series Torwesten has and still competes in, and he has victories in all of them. His best time around the VLN Nürburgring Nordschleife Combined circuit, which includes half of the GP track, is a 9:04. While modern machinery is able to put down lap times nearly two minutes faster than that, Torwesten’s best time would have been fast enough to put him on pole for the 1990 DTM race there.

Over so many years of racing, Torwesten has many great memories of driving the car. One of his best, and one that demonstrates the spirit of the Nürburgring race fans, was when he ran out of fuel about halfway around a lap. He pulled up at a marshal’s gate where the emergency vehicles can get on track and was pushed through the car park up to the road, ready to get recovered into retirement. One of the spectators had a better idea, though, and went to drain the fuel tank of a sausage van’s generator.

“He put 5.0 liters (1.3 gallons) in the tank but told me to go get my team to bring some fuel back later because they would need fresh sausages,” remembers Torwesten. “The car fired up, I got back to the pits and filled up, and every time I went past the same place for the remaining ten laps, I could hear the crowd cheering. That was really special.”

After 20 seasons of racing, he thought it was time to fix the stone chip damage in the front splitter and air dams. Over the winter, he had the front cleaned up and repainted, which is why it was missing a few white stripes for our photoshoot. A sticker that stayed is the one above the driver’s door that reads “Cole Trickle”.

“When the kids were growing up, they loved watching Days of Thunder, explains Torwesten. “We must have seen it together dozens of times and, as we have no neighbors, we used to turn the volume right up, so it felt like we were really in a NASCAR race. So it’s a little tribute to a family tradition. And I’ve had this car longer than I have had my youngest children, so they have grown up with it, first standing at the side of the tracks watching me go around and then when they were old enough actually driving it themselves, so a little detail like that is important.”

Six 935 DP IIIs were made. Alzen’s had a big crash at the hands of a later owner but was repaired and now resides in the U.S. Herbert Stolz has competed for many years in European Hillclimb races in one with plenty of success over the years. A pair were made for the Porsche-mad Schrey brothers who have raced everything from 924s to 935 K3s. And for one client who loved the car but didn’t want to race it, a road version was made. That silver machine has just been refurbished at dp Motorsport and shipped out to its new home in Florida.

Torwesten’s example, however, may be the most famous of them all. A few years ago, the Spark model company made a run of 350 1/43-scale examples of this car and gave the very first one to Torwesten. Incredibly, it’s accurate down to the NACA air scoops in the rear window. Perhaps those small Porsches will inspire some young enthusiasts today, just as the original 935s did back in the 1970s. The DP III is also a measure of Porsche and Zimmerman’s genius, as this machine has lasted and thrived around the punishing Nürburgring for over 20 years. 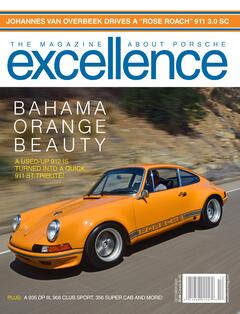