Police-spec Porsches are a unique and often forgotten chapter in Porsche history. 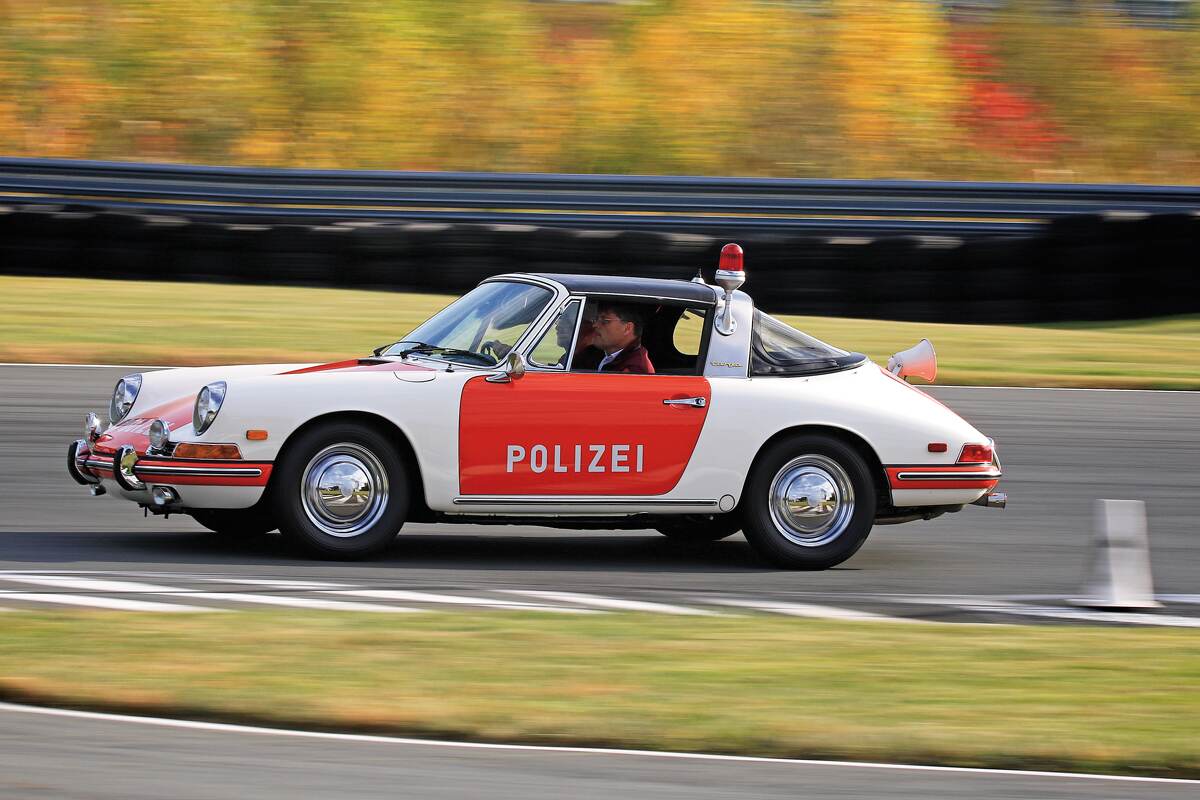 Photos by Dom Miliano and Porsche

If you’re reading this, you likely know that Porsche has a reputation for making agile, fast, and fun sports cars that were born for the German autobahn, challenging rally routes, and the race track. But for many of those decades, Porsche has also made specially prepared vehicles for international police and security departments.

As you might have guessed, the German traffic police have used these unique Porsches for speed and lane discipline enforcement due to the need to be able to keep up and track down cars on the long stretches of autobahn. In addition to the homeland, Austria, the Netherlands, and Great Britain have found a use for specially outfitted Porsches going back to the 356.

Since there’s not a lot of easily obtainable information on these cars—I persistently searched the internet and my personal Porsche book collection for details—I almost gave up. However, I got inspired to continue digging when a 911 in police livery showed up at my PCA Region’s annual Gathering of Friends party. It was the hit of the event! Then, searching the web again, I came across a neat old black and white photo from 1959 showing a long row of Autobahnpolizei standing at attention next to a long row of white 356 Cabriolets. I was hooked! 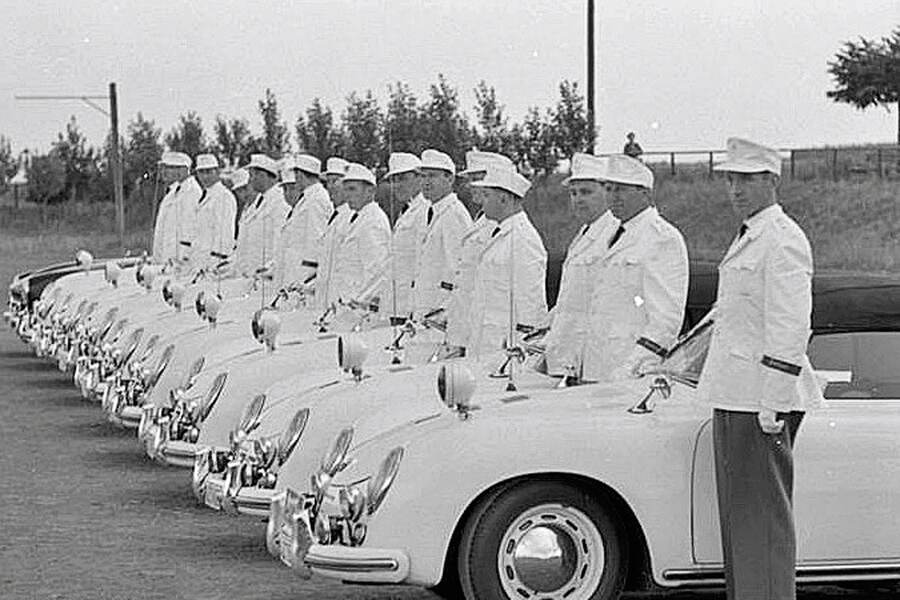 I discovered that the rationale for using a Porsche as a police car was the same reason that so many racers of the era chose them. They were safe and solidly built. They had excellent brakes. They were capable of traveling at high speeds while delivering decent fuel economy. And they were known to be very reliable—the same things regular Porsche buyers value today.

The surprising thing (at least for me) was the choice of Cabriolets instead of coupes. The purpose given from a few sources was that this gave the police a higher platform from which the officer could direct traffic should the need arise. More important for patrolling the autobahn, the 356 was a dramatic improvement over the commonly-used BMW Isetta (a tiny, low powered car whose sales are touted to have saved BMW from extinction).

These German police Porsches were outfitted with a larger gas tank, a single flashing blue light, an external loudspeaker, and an additional, highly visible brake/STOP light. Because of the expected need to use the car for traffic duties in all weather, it even had water repellent upholstery. One of these unique cars, a 356B Cabriolet, is reported to have served the Düsseldorf police for 100,000 kilometers (62,137 miles) and today lives a quiet life in a private collection in Belgium. 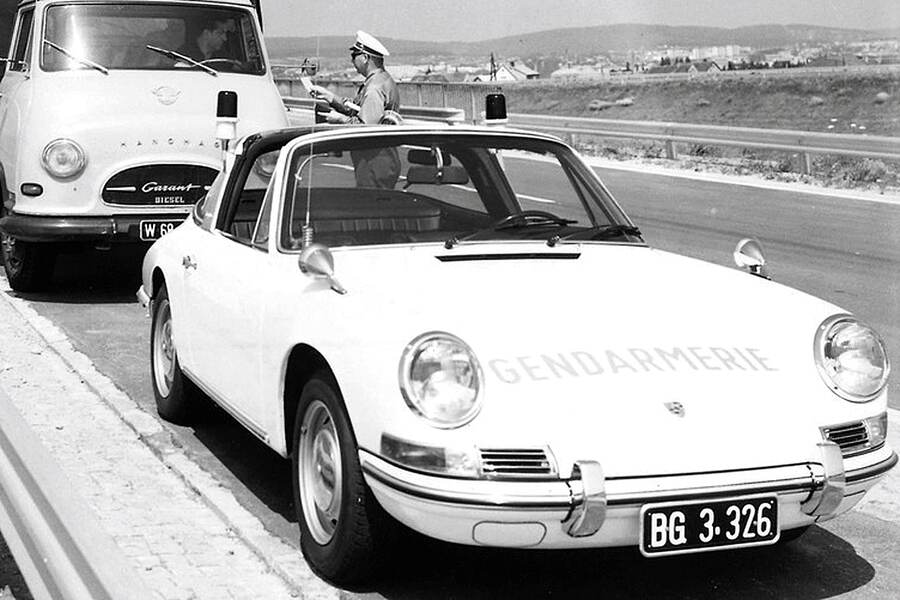 An early 911 Targa during a traffic stop in Austria.

Back in the early 1960s, it wasn’t just Germany’s highways that eschewed posted speed limits. The Netherlands, too, had fast roads and, not surprisingly, serious

accidents were common enough that the authorities—called the Rijkspolitie, or National Police—decided that they also needed to get a vehicle that would be good for police “pursuit” duties. The group was known as Algemene Verkeers Dienst (AVD), or General Traffic Department. From the beginning, these also were 356 Cabriolets and remained in service even after the 911 and 912 models came on the scene. One source on this subject said that only specially trained officers were allowed to drive these 75-hp 356s and that the officers had to be at least 25 years old and married, preferably with children.

It wasn’t until the 911 and 912 Targa models were introduced that these police departments switched to more modern and faster patrol and pursuit 900 series cars. These Porsches were outfitted in a similar fashion as the German models but had additional lighting in front and were painted in Dutch orange across parts of the body to help identify them as part of the police force. Porsche police cars are still in service in the Netherlands. Their car selections have evolved over time from 356 to 911 and 912 and even the 924. 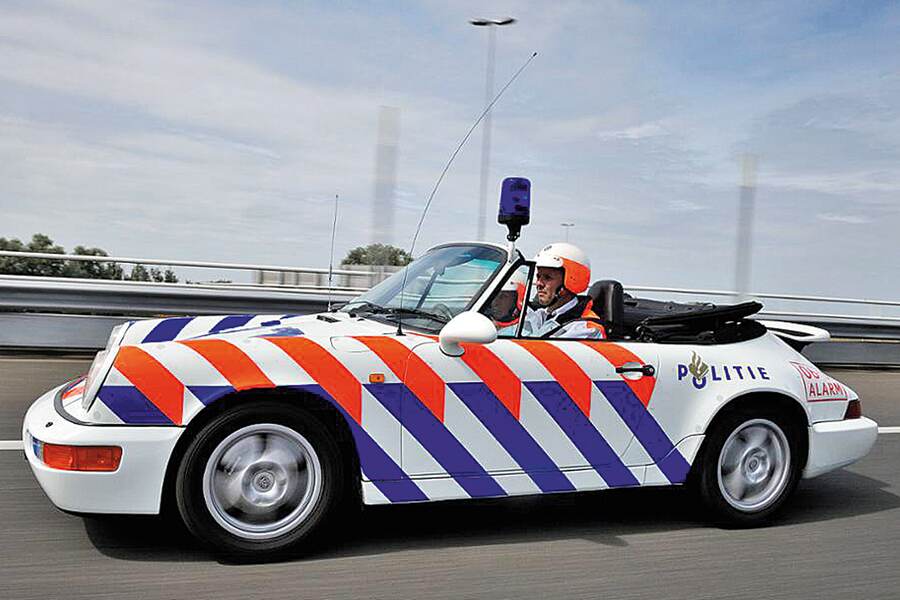 A Rijkspolitie-liveried 964 Targa in The Netherlands (note the open top and the use of helmets!).

One report even mentions that they have a 918 in “special” service today—but you can take that with a grain of salt! One of the side benefits mentioned for using Porsches is that it supposedly helps with the recruitment of new officers. While Porsche police duty may seem like a prized assignment, because these early cars were Cabriolets, the officers received standard-issue caps, helmets, goggles, and raincoats since they had to operate with the top down—rain or shine.

The Dutch seem to have a lot of respect and affection for these rare cars because, in 2017, Porsche of the Gelderland set a Guinness World Record by bringing forty examples of the Dutch police’s Porsche models together for a celebration of these distinctive cars. The 911 Targa was the most popular Porsche in a fleet that reached 507 vehicles. This milestone awards the Netherlands with the distinction of having the largest Porsche police fleet in the world.

The use of Porsches for police duties continued until well into the 21st century. For example, in June 2017, Porsche AG lent the Austrian authorities a new 911, again specially liveried and equipped for police duties. At a ceremonial event, Dr. Helmut Eggert, the director of the Porsche sports car brand in Austria, officially handed over this vehicle to the Austrian Federal Ministry of the Interior—outfitted with traditional Porsche police car modifications. These included all the equipment an officer might need for highway service, such as a flashing blue light and a two-way radio system. 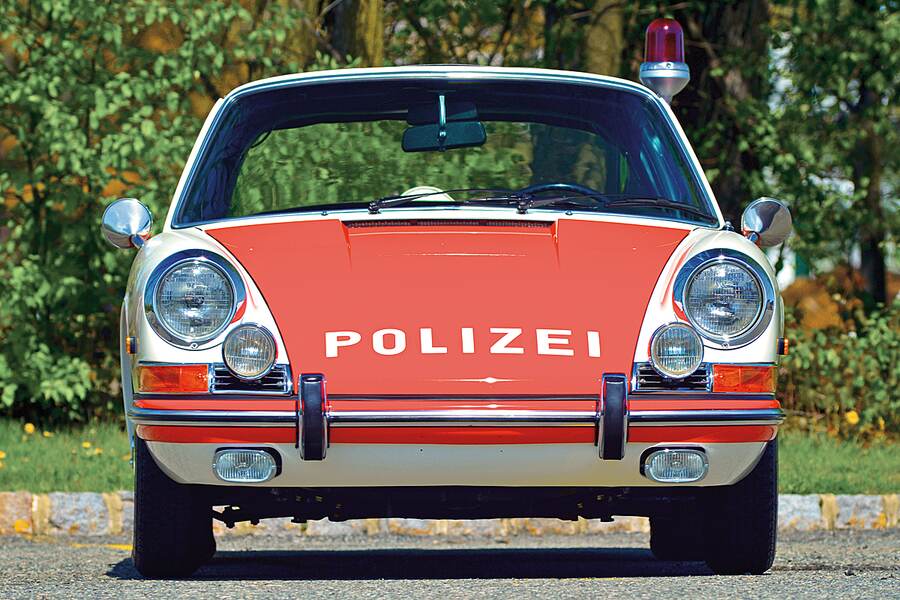 Dr. Eggert stressed at the handover, “The Porsche 911 has long been emblematic of powerful sports cars that offer a high level of everyday practicality, particularly when it comes to safety as well [as driver and passenger comfort] over long distances—both crucial aspects for the police when they are patrolling the motorways.”

Konrad Kogler, the general director for public security, wants to use the Porsche police car to demonstrate responsible behavior on the roads, saying at the ceremony: “In 2016, 427 people died in traffic accidents on Austrian roads. With the new Porsche 911, we want to demonstrate that you can drive responsibly and carefully even in a powerful sports car.”

Wrapping up, Eggert said, “Our partnership with the police force has a long tradition. In the 1960s and ’70s, it was not unusual to see a Porsche police or gendarmerie vehicle with a flashing blue light. And [as recently as] 2006, the Federal Ministry of the Interior received a Porsche 911 to use for motorway policing.” 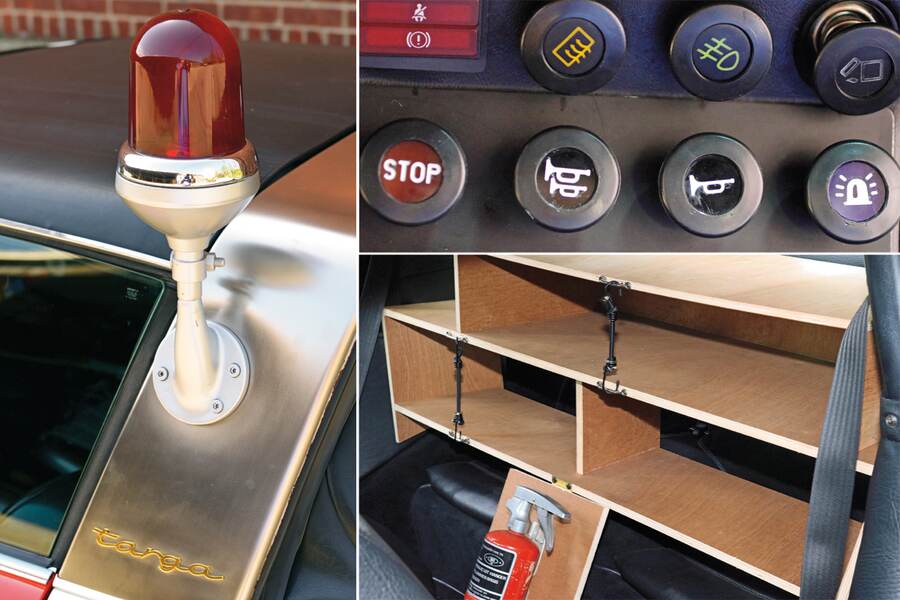 The Dutch, in their 50th-anniversary book titled “Verkeerspolitie”, or Traffic Police, celebrated their history with these cars by including several pages of period photos of the Porsches that have made up their forces. These Porsches led a hard life, reportedly not even getting shut down between shifts, so it should come as no surprise that after several decades, very few may still be left.

In spring 2017, the Attleborough, England police department received a loaner Cayman GT4, equipped as a police vehicle. Unlike Porsches used on the continent—ones used in routine traffic enforcement—this one’s prime job was to get the attention of the area’s young, inexperienced drivers. Instead of traditional law enforcement operations, the hope was that the siren song (pun intended) of a Porsche would entice teens and other new-to-the-road drivers to approach and engage in banter about road-safety and responsible driving. It’s not hard for the teens to spot the Cayman since it comes resplendent with police decals, blue lights, and its own hashtag: #Porsche999. That number was chosen because 999 is the UK’s equivalent emergency phone number to 911 here in the U.S.

A local organization called the Lind Trust funded the loan with the hope it would help combat severe and fatal accidents involving their young drivers. A press release at the handover said, “In Norfolk, 61 young drivers have died in collisions and 504 have suffered serious injuries over the last five years. The GT4 will certainly attract a lot of attention—but that’s the whole idea.” 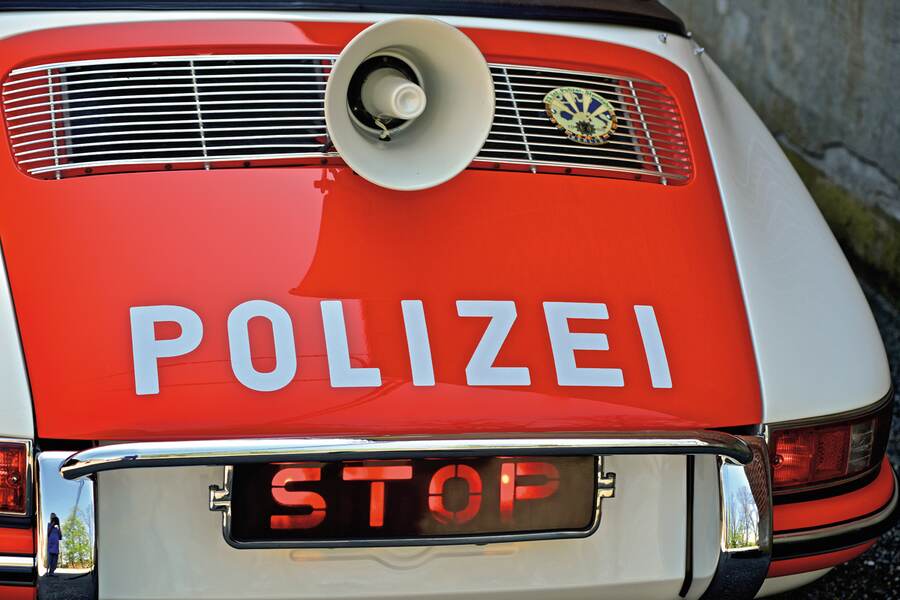 A large external speaker/siren and STOP/HALT light were used to signal drivers.

The chief constable, Simon Bailey added, “We hope the car will act as a conversation starter, which gives us the opportunity to engage with people, but more importantly those hard-to-reach groups like young drivers, and offer practical advice as well as describing what can happen when things go wrong.” It seems clear that these folks in the UK are creatively trying to leverage the power of Porsche’s mystique in a unique way with a distinctive and exciting automobile.

Deutschland has always been known for its stretches of virtually unlimited autobahn. These days fewer kilometers of their roads are so carefree, but back in the 1960s and ’70s, if the authorities wanted to run down a scoundrel, one who had taken to the highway for the getaway, few cars could beat a properly equipped Porsche. For that reason, Porsches were often used as patrol and, more important, pursuit cars.

All of the same reasons applied here at home, as with the Netherlands—speed, comfort, safety, and reliability—were paramount. These cars were so special that recently Porsche even had a display of several Porsche police vehicles in its museum in Stuttgart. However, as good as a stock Porsche is, there are still tuners who always seem to be able to take things one step further. 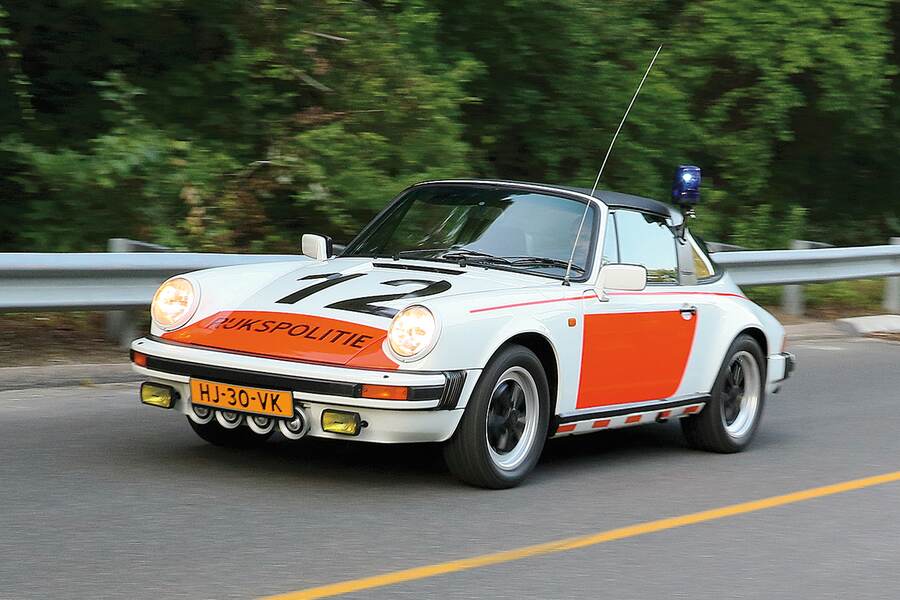 Despite this Dutch police Porsche’s age and heavy police-use, it was squeak and rattle free.

In 2005, with the cooperation and encouragement of the German Ministry of Transportation, German tuner TechArt took a 997.1-gen 911 Carrera S and gave it their special treatment (See Excellence issue #146, May 2006). Engine mods upped the power to 370 with a 0-62 mph run of about 4.5 seconds—not bad for almost 15 years ago! The all-important top speed was upped to 186 mph. Again, not as eyebrow-raising today as it was then but still impressively strong.

The reason the German Ministry of Transportation got involved is not just booster-ism. They collaborated with a group called The Association of German Tuners and made the project a key part of their program called “Tune It Safe” to inspire German drivers to build with care—i.e., only modify your car using quality components for tuning.

Despite all of my research, it’s difficult to pin down all of the facts on police modified Porsches. There may have only been as few as 1,000 of these special cars made and sold (or loaned) across the world. Because of the hard use they all experienced, it is likely only a fraction of them are left around to see and enjoy. They have for sure been used in the Netherlands, Germany, Austria, and the UK. They were also supposedly used in the German-speaking parts of Austria and Switzerland. These are reported to have seen use as police pursuit vehicles for high-speed highway use. There is even a reference to use in Australia, but I have not been able to verify that mention.

In person, the two I have seen and photographed have a unique charm. The build quality and attention to detail of the modifications is pure Porsche. To accommodate the duties of officers, wooden parcel shelves were installed behind the seats to carry snow chains, warning triangles, a fire extinguisher, a first-aid kit, and similar emergency gear. Because these police Porsches were not specially designed cars—simply Porsches pulled from the standard production run—to my eyes, these back-seat shelves have a “made in a woodshop” quality to them.

Despite the age of these cars, they are still good drivers and rock-solid down the road. Because of rarity, I suspect that finding one for your personal Porsche collection would be relatively tricky. Also speculating, if one ever does come up for sale or auction, the asking price will likely be above the standard market number for a car of similar age and condition. Police Porsches are another exciting aspect of our fascination with the marque. I hope you enjoyed it and please feel free to share any information you have on these neat little cars with us. 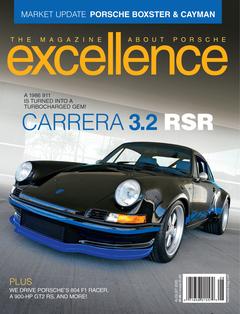