A look at the underpinnings Porsche shares with its sister brands. 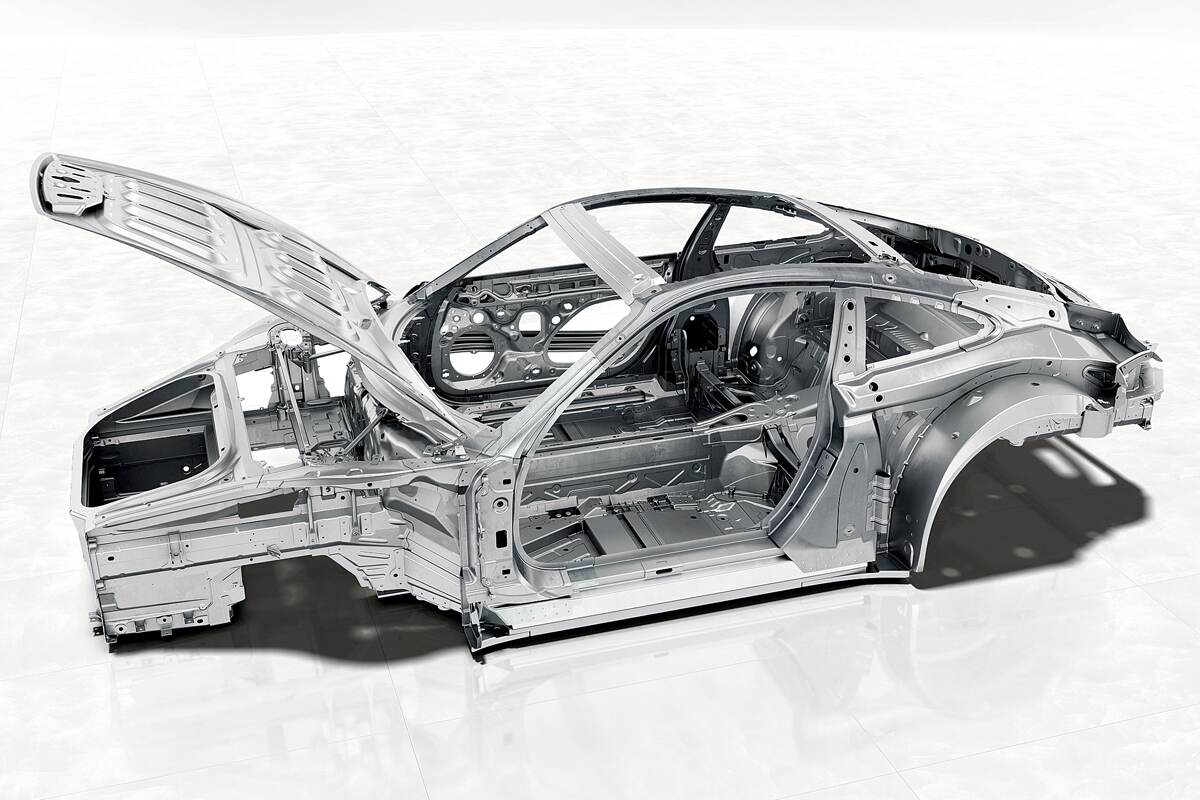 The 992 uses the VW Group’s Modular Mid-Engine Platform as its basis. It’s a Porsche-designed platform, but it adopts the VW Group naming system and some of its production techniques.

During the past twenty-five years, Porsche has transformed from a small, independent maker of sports cars that were mostly hand-built (worldwide sales had ebbed 12,500 units worldwide in 1992-1993 thanks to a global recession) into an influential arm of the Volkswagen Group (VWG) empire that sold 280,800 vehicles worldwide in 2019.  Much of this growth has been attributed to modernizing Porsche’s supply chains, manufacturing techniques, and amortizing costs by sharing as many parts as possible between different vehicles in the model line.

Porsche’s hiring of consultants from the Japanese auto industry in the 1990s is well-documented in these pages and others, and one of the results of this collaboration was not only the sharing of major components and electronic control units and switchgear, but also of entire chassis platforms. The 1997-2005 986 Boxster and 1999-2005 996-series 911 shared the same basic platform from the doors forward, as has every version since.

Of course, platform-sharing amongst different model lines is nothing new. General Motors, in particular, popularized the concept of “badge engineering” in the middle of the last century, with a hierarchy of brands whose platform-mates often differed only via minor sheet metal and trim changes. However, modern design and manufacturing techniques have enabled automakers to reap the economic benefits of platform-sharing while allowing variants of each platform to have distinct styling and driving dynamics.

Before the VW Group’s acquisition of Porsche in 2012, the two entities collaborated on the platform of the first-generation Cayenne SUV of 2003, which was also shared with the Volkswagen Touareg and the Audi Q7. This common platform, Dubbed the PL71, allowed the sharing of many basic powertrain, suspension, and electronic components while allowing each manufacturer to use unique engines and chassis tuning, which enabled each variant to feel unique to consumers. 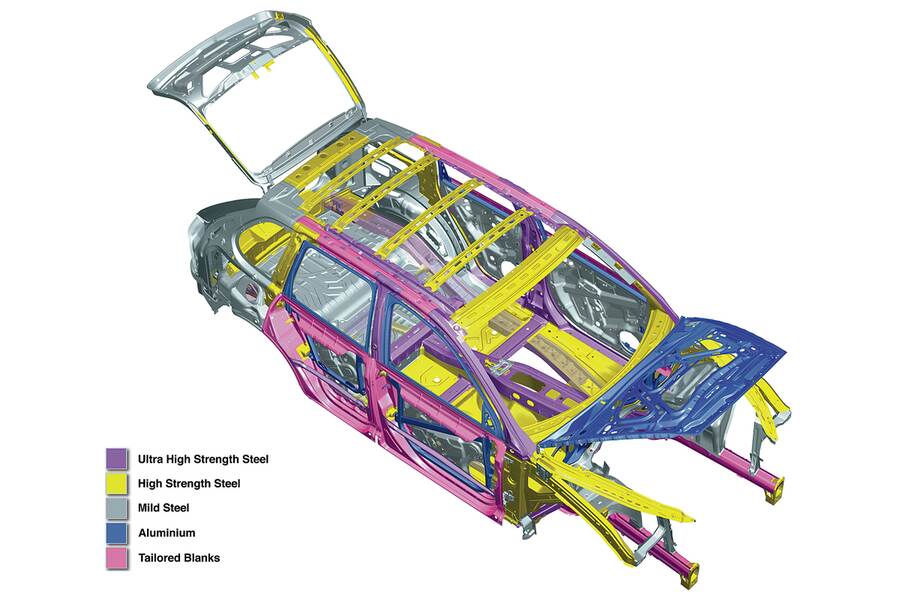 Porsche and Volkswagen began its modern platform sharing with the 2002 9PA-generation Cayenne, which was similar to the VW Touareg.

VWG’s current strategy of using truly modular platforms began in earnest even before the absorption of Porsche. 2007 saw the debut of the MLB (the German abbreviation for “Modular Longitudinal Matrix”) platform, which was introduced in 2007 to underpin the Audi A5, A4, A6/A7, and A8. Like the MQB platform for transverse, front-engine applications (VW Golf, Audi A3, etc.), the front-engine, longitudinal MLB platform used myriad engine and powertrain configurations (both gasoline and diesel engines), but by fixing the exact position and orientation of the engine, along with that of the pedal box, firewall, windshield angle, and front wheel position, production costs were reduced by about 30 percent.

While this strategy may seem restrictive, it allows designers to stretch the platform as necessary and implement multiple body styles. An extreme example of this is the transverse MQB platform being used as the basis of both the subcompact VW Polo and the full-size VW Atlas SUV! Because the engine position is already defined, it is much easier to implement components such as the vacuum brake booster, steering column, exhaust manifolds, and it alleviates costs in converting from left-hand drive to right-hand drive.

The burgeoning small SUV market of the late 2000s saw Audi introduce the compact, MLB-based first-gen Q5 SUV in 2009, and Porsche subsequently adopted the MLB platform for the 95B Macan of 2014; this provides an excellent case study for VWG’s modular platform system. The restrictions imposed by the MLB system meant that some compromises were necessary. The fixed engine mounting location, for example, meant that the Macan’s Porsche-designed twin-turbo V6 was mounted further forward than the ideal for Porsche-like weight distribution. Also, the rear suspension design dictated the use of small, single-piston floating calipers for the rear brakes.

However, the MLB platform allowed freedom in terms of drivetrain configuration. Most Audi Q5s, for instance, used a conventional ZF torque-converter automatic and the company’s Quattro all-wheel-drive system. Porsche, on the other hand, developed Audi’s DL501 S-Tronic into a quicker-shifting, seven-speed PDK dual-clutch automated gearbox, complete with an integrated transfer case and differential to allow drive to the front wheels. The icing on the cake was Porsche’s exemplary chassis tuning and Porsche Torque Vectoring (PTV) system, which allowed the 95B Macan to turn-in and handle as a Porsche should. 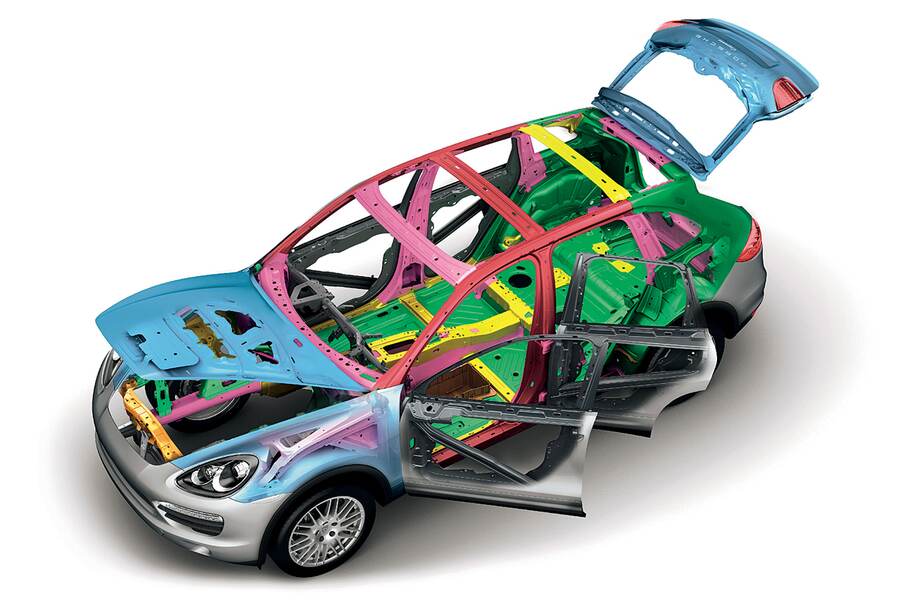 The Cayenne / Touareg platform sharing continued with the second-generation (92A) Cayenne of 2011.

The next-generation MLB Evo platform is shared amongst the 2018-up 9YA Cayenne, Audi A4, A5, A6, A7, A8, Q5, Q7, and Q8, e-tron, VW Touareg, Bentley Bentayga, and Lamborghini Urus. This strategy allows this incredibly diverse group of vehicles to share numerous major components (including a 48-volt electrical subsystem for the active anti-roll bar system) while maintaining a distinct driving feel and embodying the nameplate of each. Previous generations of Audi’s flagship A8 luxury sedan employed a unique,

all-aluminum space frame (which was radical at the time of its debut in the mid-1990s). However, the aluminum-intensive construction of the MLB Evo allows the A8 to share this platform and still maintain a favorable curb weight when compared to its rivals.

Porsche took the lead in designing the MSB (Modular Standard Drivetrain) longitudinal front-engine, rear- or all-wheel-drive platform. It is more limited in scope than the MLB Evo, as it provides the basis for only the 2017 and newer 971 Panamera, 2018 and up Bentley Continental, and the 2019-up Bentley Flying Spur. However, the MSB platform-mates all share the aforementioned 48V electrical subsystem, and many of the same chassis and electrical components to save costs, which is important even in the premium sector.

Porsche’s venerable sports cars have been brought into the corporate fold with the current 2020 992-series 911, which uses the VW Group designation of MMB for “Modular Mid-Engine Platform.” While it would seem logical to base the current Audi R8 and Lamborghini Huracan mid-engine supercars on the same MMB platform, they share the unique MSS (Modular Sports System) chassis at this time. However, given the upcoming plethora of 992 and next-generation 718 variants, the MMB requires a modular system of its own. 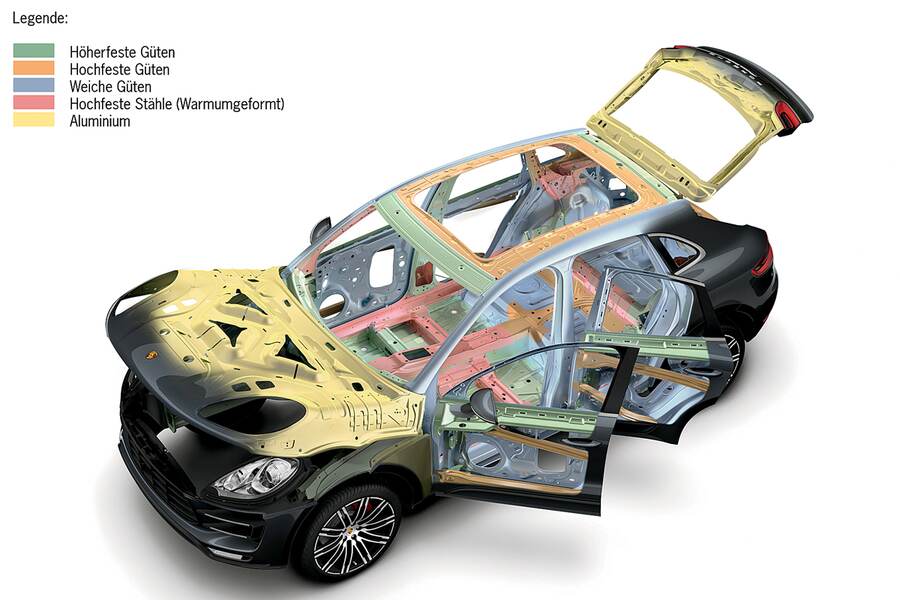 The current 9YA Cayenne shares its MLB Evo platform with the Audi Q7, Bentley Bentayga, Lamborghini Urus, and several others.

The basic front body structure of all MMB-based Porsches is the same as with previous iterations. Still, Porsche’s new factory configuration and manufacturing techniques allow longitudinal load beams of different wall thicknesses (thinner for the 718 and 992 coupes, thicker for Cabriolets and Turbos) to be installed on different front modules as they travel down the same production line.

The MSB platform of the 971 Panamera saw Porsche’s first use of the entire aluminum body side panel as a separate pressing, which is subsequently crimped and roll-hemmed onto the main unibody. This technique is adopted on the 992/next-gen 718 MMB system. This allows all variants to be assembled on the same production line, with the coupe, Cabriolet, Targa, and mid-engine side panels applied as necessary. The 992 coupe even has its own subsystem of a modular roof panel, with plain aluminum, sheet-metal sliding sunroof, glass sliding sunroof, carbon fiber, and magnesium variants all easily installed on the same assembly line.

The 992’s MMB platform was originally developed with a future electric hybrid version in mind, with extra space allotted inside the PDK transmission case for an “E-Machine” and extra space up front for a battery pack and larger cooling system. However, the future of the 992 Hybrid project is uncertain as of this writing; Porsche may be reassessing its electrification strategy and going straight to a full battery electric vehicle (BEV) based on the 718 version of the MMB platform.

Porsche engineers took the lead to develop VWG’s first fully electric chassis platform; dubbed the J1, this underpins the recently introduced Taycan electric car (see the December 2019/#269 tech feature) and the upcoming Audi e-tron GT. It was also rumored that Bentley would introduce a BEV based on the J1 platform, but that is unconfirmed as of this writing. 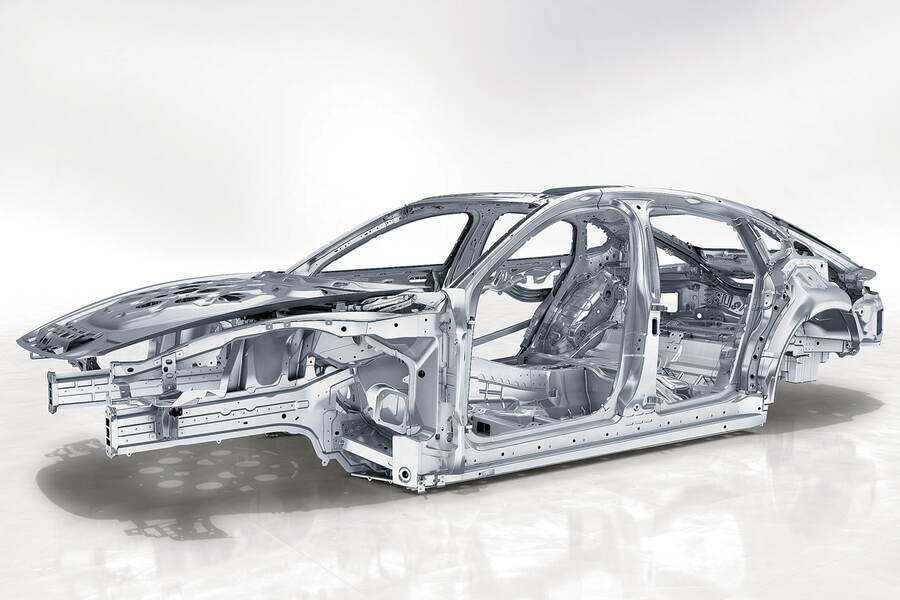 The current 971 Panamera shares its MSB platform with the new Bentley Continental GT and Flying Spur.

The J1 Platform is but a small cornerstone of VWG’s overall electrification plan. The infamous VWG “Dieselgate” scandal that unfolded in 2015 has forced the automaker to double down on BEVs as the future of automotive propulsion systems. Therefore the VW Group has rolled out ambitious plans to field no less than 70 different electric vehicles by 2028 while aiming to achieve full carbon neutrality by 2050.

A central component of this strategy is to build this new class of BEVs on entirely separate platforms from internal combustion (IC)-engine vehicles. Several other automakers are using the same platforms for both gasoline and IC-engine varietals, which at first may appear to save costs. Still, it often results in compromised packaging and adds to subsequent engineering and manufacturing costs. Audi did recently use the MLB Evo platform for its current all-electric e-tron SUV, but that was a stopgap measure to ensure it had a BEV on the market to rival Jaguar’s I-Pace and others.

At the core of VWG’s electrification plan is the MEB (Modular Electric Drive) platform, which is a dedicated BEV “skateboard chassis,” similar to the Porsche-developed J1. The company will spend 30 billion euros ($33.1 billion U.S. dollars) on BEV development during the next five years and promises a total of 27 MEB-based models by 2022. The skateboard design was popularized by Tesla (though the idea first appeared on a GM Research and Development concept car in 2002) and mounts the battery packs in the underfloor area, the aluminum frame of which also serves as a load-bearing member. The front and rear subframes carry the electric motor(s) and drivetrain, power electronics control units, and suspension components.

Like VWG’s existing IC-engine platforms, the MEB will be designed to be easily adaptable to various body styles, such as the compact, entry-level ID.3 hatchback (which should be on sale in Europe as you read this), and the upcoming ID.BUZZ, which is a spiritual successor to the classic VW microbus and will go on sale in 2022. VWG has also formed partnerships with various battery cell manufacturers (LG Chem, SKI, CATL, and Samsung), and has invested in Silicon Valley-based QuantumScape to aid the development of next-generation solid-state battery technology. The idea is to have BEV chassis that can accept various types of battery packs depending on the current technology, with individual cells packaged in shoebox-sized battery modules that can be easily replaced.

The next piece of the VWG electric vehicle puzzle is the PPE (Premium Platform Electric) platform for medium and large BEVs, which has been co-developed by Audi and Porsche. The first car ride on the PPE platform is likely to be the next-generation Macan BEV, and will debut in 2021; a slew of Audi-branded PPE-based BEVs is likely to follow.

However, with the possibility of further consolidation in the global auto industry, major automakers are forming unlikely partnerships to help cover development costs. Recent public comments by Ulrich Widmann of Audi suggest the VW Group is interested in offering the PPE platform to other automakers who wish to develop their own BEVs. 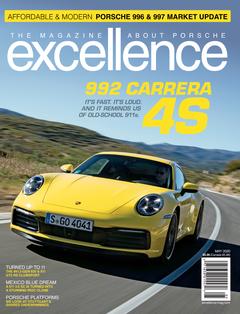