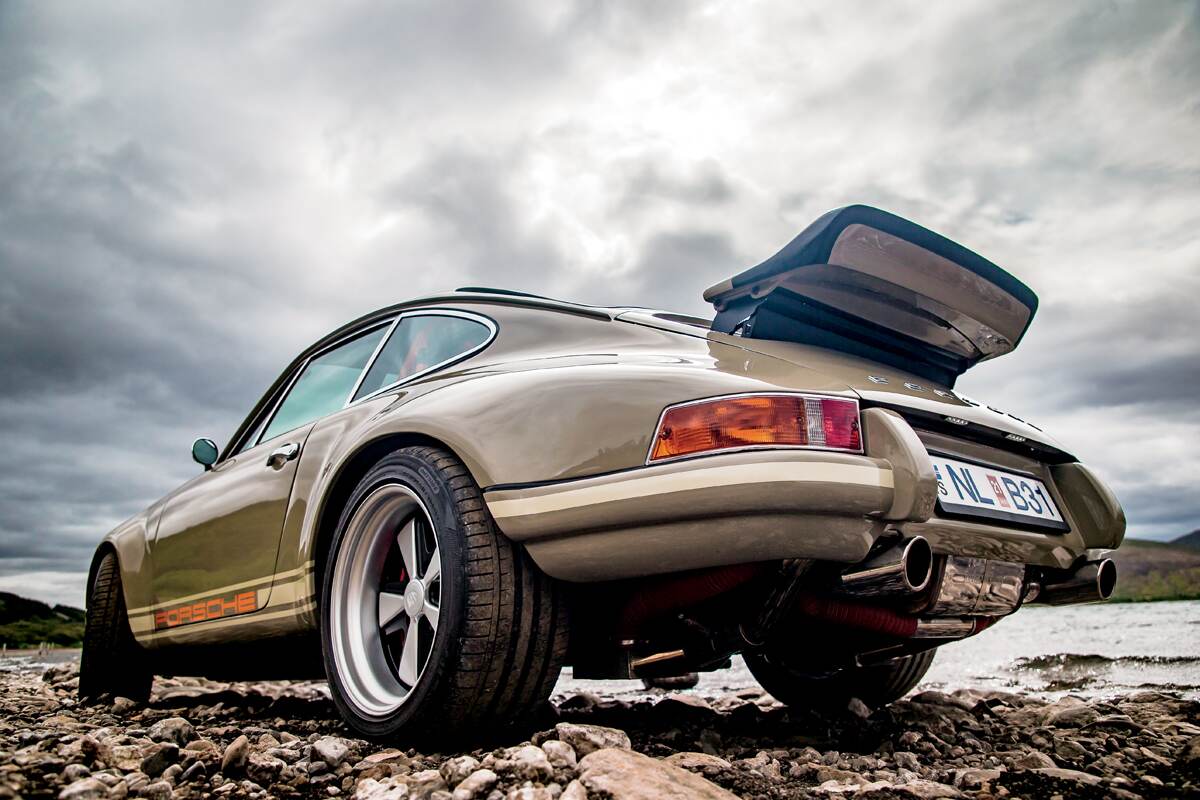 The last place you’d ever expect to find a high-quality classic sports car build is under a lakeside cabin in the remote interior of Iceland. Yet, here we are. Looking around appreciatively at the excellent attention to detail on this G-model 911, it wouldn’t be too much of a stretch to believe a big-name shop constructed this machine. But this 1975 911S was built from the ground up in a small home garage a couple of hours drive from the capital city of Reykjavik.

The idea for Jon Hafsteinsson’s stunning creation came after a nut-and-bolt restoration of a 1970 911S Targa he undertook a few years ago. Although that car ended up being a painstakingly original build, with every part being factory standard and period-correct, he often though a few things could have been updated. By the time the restoration was complete, that Targa was arguably among the most beautiful Porsches in the Land of Fire and Ice. But Hafsteinsson’s desire to modify the car became so strong that he wanted to start a new project with a completely different approach.

“I wanted to do something different, to build a car that was playful, bold, and fun to drive, that used the best engine, modifications, and upgrades, but was still kept all Porsche,” he says. He wanted to do an unrestrained build that included absolutely anything he wanted, could make, find, or afford. And, as the final product attests to, that turned out to be an excellent decision. 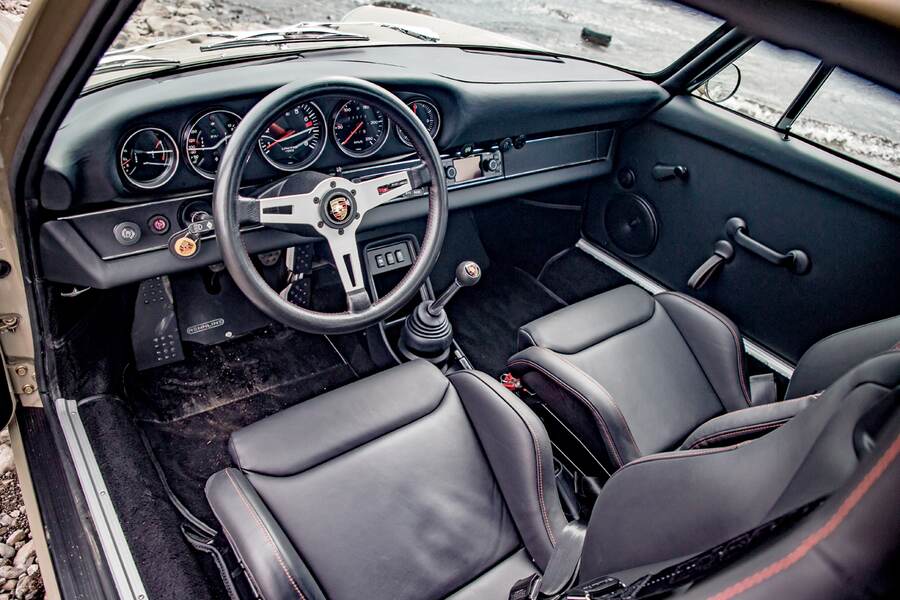 There are precious few air-cooled Porsches in Iceland—possibly as few as 30. Although that is surprising at first, it makes sense considering the population of that entire country is approximately 360,000 people. With no affordable 911 shells available in his homeland, Hafsteinsson began to search overseas. There was a limit to what he would search for, though. That’s because Iceland levies a punitive 60 percent tax on imported cars less than 40 years old. Once a car has passed that age, the import tax drops to 13 percent. With that being the case, and the year then being 2015, Hafsteinsson searched for 1975 and older 911s. It was a long and fruitless few months before a suitable car finally popped up on eBay.

Off the road for many decades, the disco-era 911S was located in Florida and had no accident damage, a Type 915 gearbox, and Fuchs alloy wheels. In other words, it was an excellent foundation for a build. As such, the car was purchased sight unseen, with the online ad photos being the only objective reference to the car’s condition. Once the car was delivered, it was put on a jig in Hafsteinsson’s garage, where the first job was to cut out any rusty panels and replace them with new metal.

“I think it had been standing outside for many years,” says Hafsteinsson. “It had rusted through in all the places that rain gets in.” The online ad for the car said that its engine worked. In reality, though, it was found to be seized upon delivery. But the replacement for the trashed stock 2.7 was an easy choice. 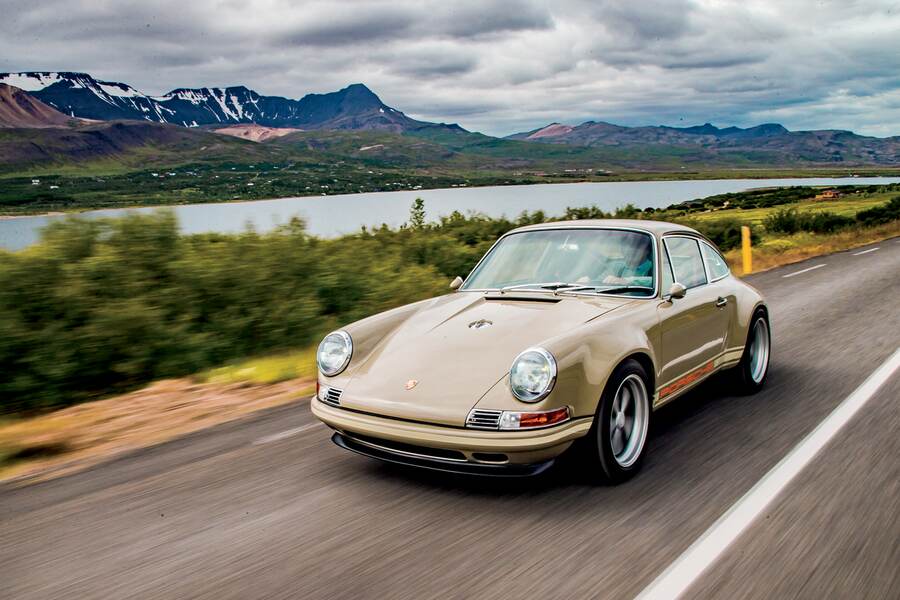 “The 993’s M64/21 engine was the last air-cooled block, and so it is the perfect mix of classic and modern,” explains Hafsteinsson. “A few guys were supplying a conversion kit for a 993 engine in a G-body, but after some investigation, I went with Instant-G [in Newark, Delaware]. He talked to Dr. Steven Timmins there about what he needed and went with a low-mileage 3.6-liter flat-six with VarioRam. Once the exact engine was picked out, Instant-G did a top end rebuild and reseal. They also included a lightweight flywheel and clutch, and a custom high-flow stainless exhaust.

Hafsteinsson installed the engine mostly himself, although he says that he had to call his wife downstairs a few times to lend a hand. The installation was finished off with a 993 oil cooler mounted in the front fender, a single pulley alternator conversion, custom-made air ducts, and air conditioning delete, as it doesn’t typically get hotter than 60 degrees Fahrenheit in the summer there.

The mileage on the 915 five-speed was unknown, so it was sent to TwinSpark Racing in Holland to get its internals rebuilt. Strengthened with steel inserts in the bearings, a limited-slip differential, and a WEVO modified final drive, it’s something Hafsteinsson shouldn’t ever worry about breaking. Gear changes are dealt with by a RennSport performance shifter and precision coupler. 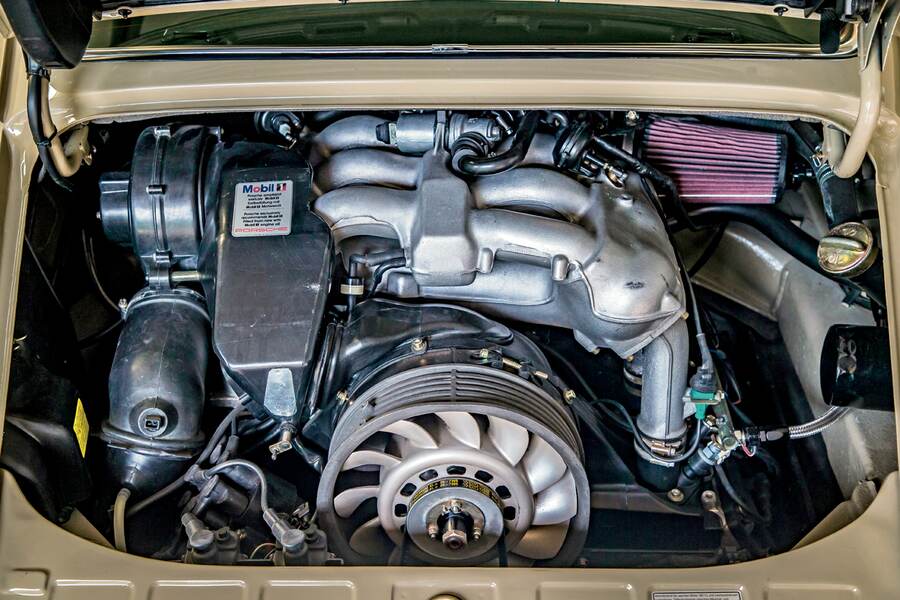 There are a plethora of winged and wide-bodied Porsches screaming for attention all over the world. Hafsteinsson, however, didn’t feel the need to have an over-the-top car, so he went with a very refined and understated backdated long-hood look. The fender flares are a set of ST steel panels that he welded on. But those subtle bulges on the front wheel arches proved tricky to get right.

“I wanted them to curve just the right way around the wheels,” recounts Hafsteinsson. For me, the ST ones were kind of too long compared to their height, which I thought looked a bit awkward.” He tried some aftermarket ones from a few different companies, but he ended up sending them all back and made his own from a set of factory ST flares. But it had been a long time since Hafsteinsson had done any welding (before MIG welders became popular), so he practiced until he was up to the task.

“I did a pretty good job, if I can say so myself,” he says. “I was quite impressed when the paint shop complimented me on the work I’d done.” The paint was done by Lakkbræður (Lacquer Brothers), a small shop in Reykjavik that specializes in classic cars. The color is called Stone Grey, one used on early Porsches, and its earthy tone suits the car perfectly. The aluminum window frames were refurbished by Early 911 in the UK. 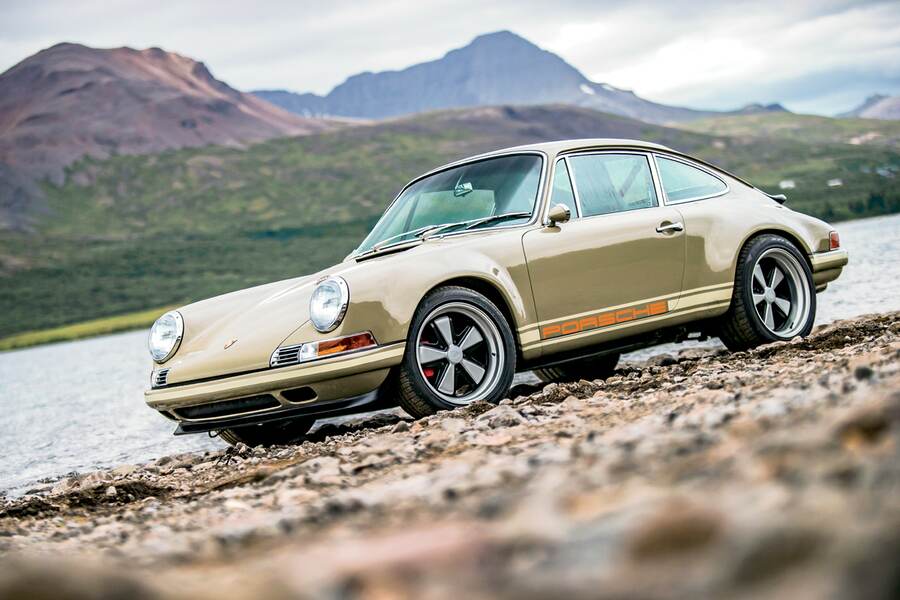 The most challenging aspect of the build, Hafsteinsson says, was getting the wheel offset perfect. With the ST-based fender flares already done, getting wheels with too much dish would mean that they would stick out too far beyond the fenders. But too little wheel dishing would require wheel spacers. Using the original Fuchs alloys as a template, he modestly claims that it was just good guesswork that got the final result.

The Braid BZ classic Fuchs wheels look stunning and fit perfectly, although Hafsteinsson did end up having to go with a lower profile front tire since the first set rubbed a little. The wheels are now wrapped in Falken FK453s, 225/45R17s in front and 265/40R17s in back.

The 17-inch diameter wheels were required to accommodate his choice of big 996-gen 911 Turbo calipers. Yes, conventional wisdom says that a set from a 930-gen 911 Turbo is the best of the best, but those 917-derived stoppers are also expensive. Hafsteinsson isn’t intending on racing the car so, the 996 Turbo set provide it with more than enough stopping power. All four corners have Brembo brake discs and pads, which were mounted with a kit from Instant-G. 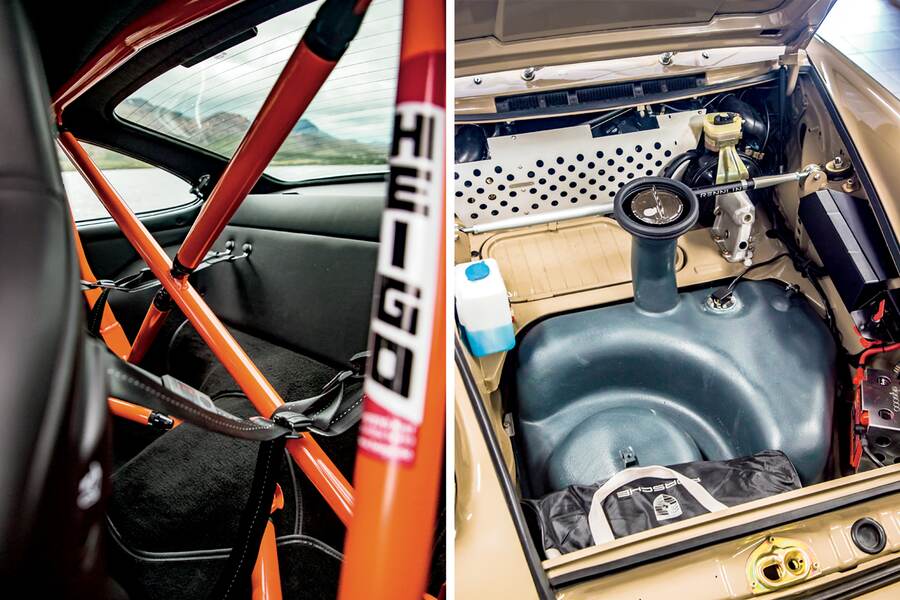 Functional and refined, the interior is pure class and made from high-quality materials. The RS door panels, backwall, and carpet are from Lakewell in Belgium, and the Recaro Sportster CS seats were a fine choice for this build. Hafsteinsson installed the RS carpets himself, about which he apologetically explains that the vinyl edge binders are the only non-leather item. The dash is all his own work.

Not wanting to ruin the stock center console by adding switches and the engine warning light, he installed a console he found on eBay. He then covered it in leather and mounted the light and a button to raise the rear spoiler. The spoiler actuating switch is actually what could be called the only “design fault” in the whole car, as he can’t reach it while he’s strapped in and driving. 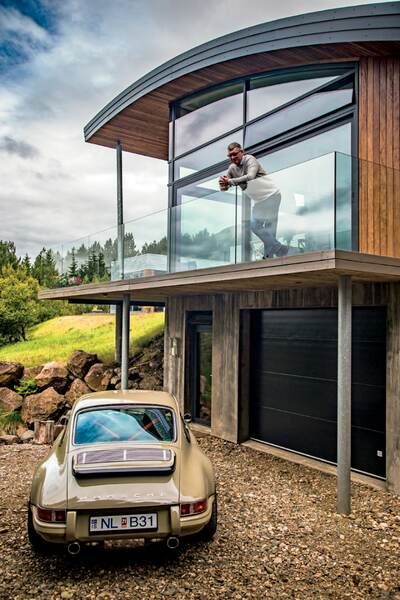 The gorgeously understated semi-ducktail spoiler is one of the most eye-catching parts of the whole car. Bought from FSH in Germany, along with the very simple bumpers, he chose it because he liked its minimalist look. It didn’t fit on a G-body decklid, though, so he had to buy one from a 964-gen 911. He also made the polished aluminum grille himself, as the original one didn’t fit, and he wanted the curve to be exactly right. With hours and hours of sanding and polishing, it took him several days to make.

The finishing aesthetic touch was a set of chrome windshield wiper arms, of which Hafsteinsson only recently found a pair. “I had to wait nearly three years to find them,” he says. “The first set got lost in the mail, and I had to set it so that Google Alerts would notify me when a set was listed on eBay.”

The last few weeks of the build were dedicated to ironing our some bugs. For example, the handling was oddly vague, which was due to none of the wheels being correctly aligned. But there seemed to be a more serious issue with the drivetrain.

“The clutch was very heavy when trying to change gear, like in an old truck,” says Hafsteinsson. Back in the garage, he eventually found that the pedal box clutch shaft lever was too long. Hafsteinsson was initially impressed with the power of the car. He was even more impressed when he realized that he was only using half of the gas pedal’s travel. Fixing that made a rather extraordinary difference!

The build was finished just a few days before Sigfus Sverrisson, the vice president of the Icelandic Porsche Club, and I arrived, so we were the very first to see the completed project. Both of us can say that we know our Porsches pretty well, but this one seriously impressed us—and so did getting it out of the garage. It is strange indeed to see such a beautiful 911 inch along what is little more than just a footpath, crunching gravel under the wide tires just inches away from the trees. It is even stranger to see it edge into position at the side of the lake on top of dinner-plate-sized stones.

Cruising on the road next to the lake, there are, of course, a lot of performance capabilities left unexplored, but the ride is as assured as you would expect. Hafsteinsson is unlike some other owners keen to show off their work, as he doesn’t feel the need to make me scream in fear for my life from the passenger seat. But the sound of a 3.6 with a lot less soundproofing than the 993 is incredible!

The following weekend Hafsteinsson took this 911S to Reykjavik to let the Icelandic Porsche Club members drool over it. Trying to get an emotional description out of an Icelander is not the easiest thing in the world, so what he means by, “I think they liked it,” translates to, “Yep, they were totally blown away!”

And now that he’s put a few miles on the car, he has a few more ideas of what he can do to make this the perfect Porsche. Some of Iceland’s roads are among the best cruising routes in the world, while others need a capable 4×4 to get along. To make the car a bit more usable, he’s planning on upgrading this Porsche to coil-over suspension.

With the torsion bars removed and the coils over the shocks, the car’s weight sits differently. That setup also frees up room for mounting protective panels underneath. The front top suspension mounts have already been reinforced, and the rear ones are about to be done. “It’s not a hard job, many people have done it…” Hafsteinsson shrugs, with Icelandic understatement. 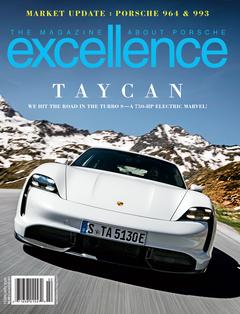