The Power & the Glory 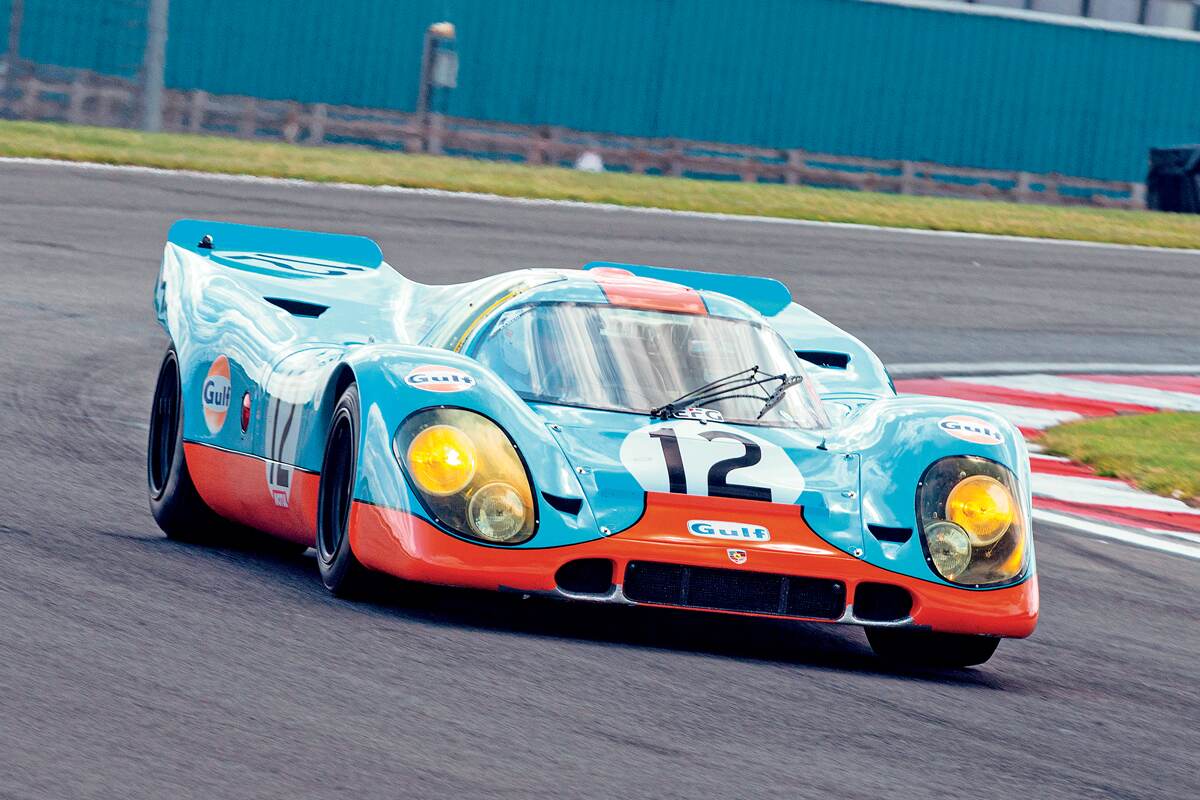 It’s hot, it’s loud, it’s cramped, and it’s powerful. Of course it is—it’s a 917! One thing it’s not, surprisingly, is difficult to drive. How did I come to this conclusion? Thanks to Claudio Roddaro, the guardian of 917 #008, who let me loose in it at the Rennsport Collective gathering at Donington Park in Leicestershire, England.

Although it’s presented as a later 917 Kurzheck (short-tail) in Gulf livery, our feature car is, in fact, a 1969 model. It was made for World Sportscar Championship (WSC) events for Porsche System Engineering, so it’s a works car. It was driven in a white-with-blue-accents livery at Le Mans in 1969 by superstars of the day Richard Attwood and Vic Elford. Given #008’s main claim to fame is its one-off participation in the ’69 Le Mans 24 Hours, it’s pertinent to briefly reflect on how it got on in that race.

It all began reasonably auspiciously. Porsche had already won the 1969 WSC Championship—the International Championship for Makes—with outright victories with 908s in the 1,000 km races at Brands Hatch, Monza, Spa, and the Nürburgring, as well the Targa Florio. If winning the Championship had been Porsche’s only interest, it could have stayed away from Le Mans. But having yet to take an overall win at La Sarthe, Porsche was not about to miss out. 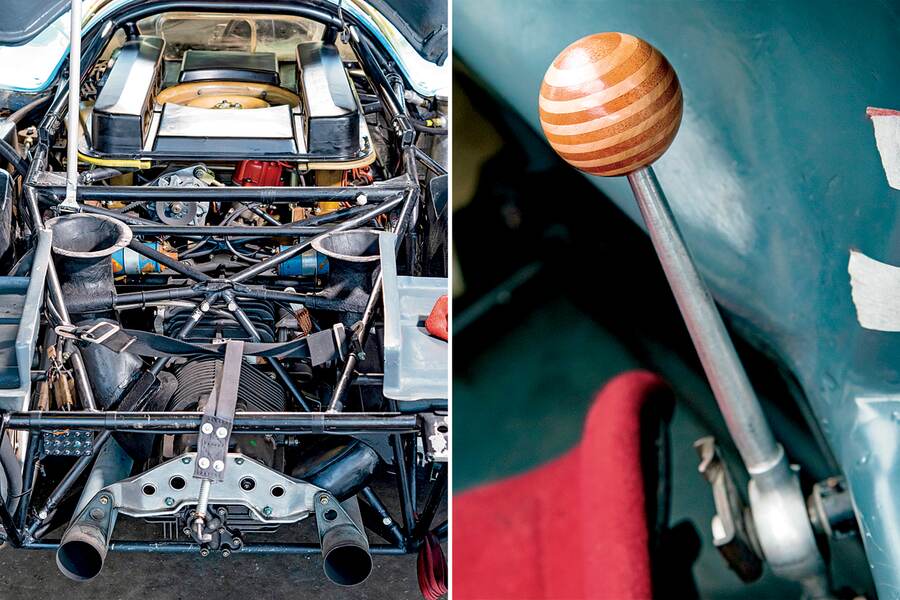 In the race, privateer John Woolfe tragically lost his life on the first lap while at the wheel of 917 chassis #005. Stommelen (with co-driver Kurt Ahrens Jr.) was the initial leader, though he was slowed and finally halted after 15 hours by oil leaks. After four hours of racing, Vic Elford had taken the lead in #008. By 2:00 a.m. on Sunday morning, with dense mist but dry roads, the lone remaining 917 was well in the lead and taking things easy, comfortably four laps ahead of the 908 of Gerhard Mitter and Udo Schütz in second, and five laps ahead of the 908 of Willi Kauhsen and Rudi Lins in third.

Two John Wyer-Gulf Ford GT40s were fourth and fifth. But the faster GT40 of Jacky Ickx and Jackie Oliver was eight laps behind Elford and Attwood, so it was not a serious challenge at that point. Fuel consumption was also a factor. Although the 917s were extremely fast, they consumed gasoline voraciously, needing to pit for refueling just over every hour. The GT40s, in comparison, could go an hour-and-a-half between stops. The 908s were somewhere in between in terms of thirst. 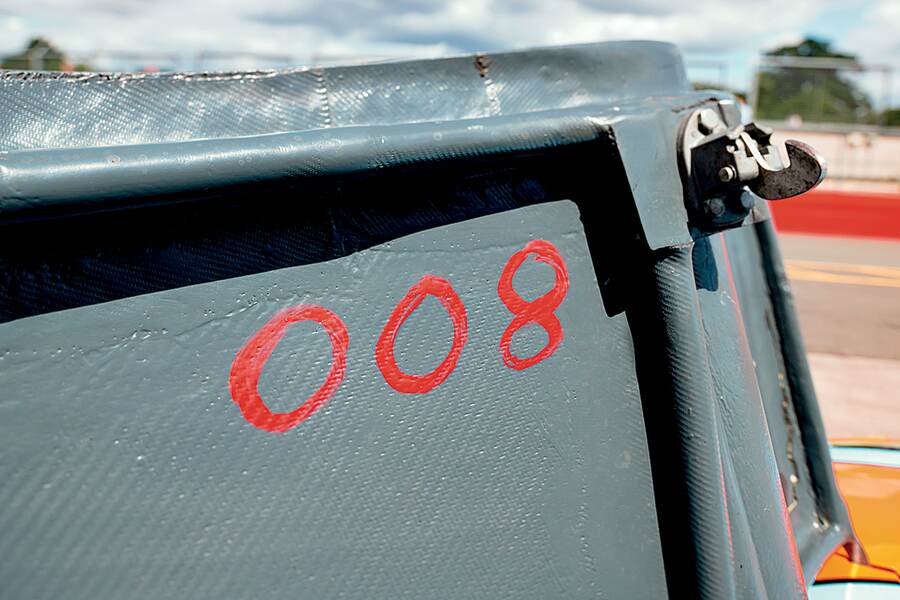 But as Sunday morning wore on, 917 #008 began to trail oil smoke, and it was clear that Elford and Attwood were taking it easy. At 10:00 a.m. they still had a six-lap lead over the 908 of Kauhsen/Lins and were ten laps ahead of Ickx/Oliver. But just an hour later, its gearbox was finished, and its race was over.

Despite this, even at the 21st hour, on distance covered, #008 was still well in the lead, four laps ahead of the Ickx/Oliver GT40. Spectators gave the 917’s mechanics an ovation as they pushed it over the line. Porsche aficionados will recall that the race result went right down to the wire, with Jacky Ickx in the GT40 outdriving Hans Herrmann’s brake-deficient 908 to take the victory by a scant 100 yards.

With its switch from Ford and Mirage to Porsche race cars for 1970, John Wyer Automotive Engineering acquired 917 #008. The car was then used extensively for aerodynamic testing at the 3.673-mile Österreichring, sporting the revised short-tail bodywork it’s worn ever since. It ran in the Le Mans trials in April 1970 with Grand Prix motorcycle champion turned auto racer Mike Hailwood on driving duty. Both long- and short-tail engine covers were tested before Weissach agreed to produce a compromised version. Then, Hollywood came to France. 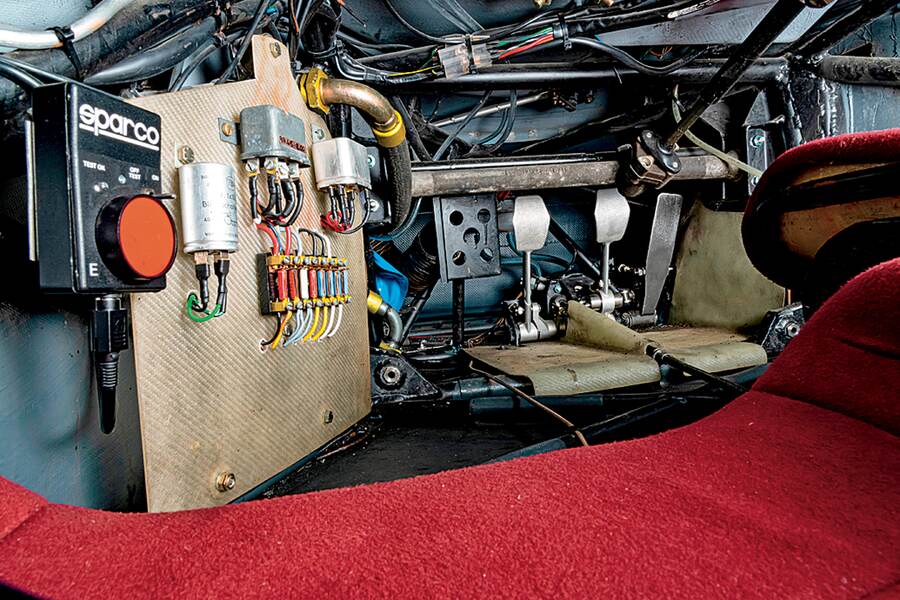 “Steve McQueen was scouting for his Le Mans movie, and he came to Le Mans in April 1970, and #008 was there,” explains Claudio Roddaro. “We have pictures of Steve in the car. Two months later, when he came back to film the actual race for the movie, the car was still white.” So, #008 was not in Gulf livery, then, despite the short tail. The implication is that the Wyer team were in no hurry to race it again, and they retained it as a spare for the next two seasons.

Checking race entries for those two seasons, #008 does not show up at any international WSC event, not even as a test car. New CSI (pre-FIA) regulations sidelined the 917 and its archrival the Ferrari 512 at the end of 1971. As such, 917 #008 was sold to Freisinger Motorsport founder, Manfred Freisinger Sr. The car was then rebuilt at Freisinger’s workshops in Karlsruhe, Germany and sold to Swiss racer Claude Haldi. Between 1989 and 1991 Freisinger rebuilt #008 yet again for a private collection.

Our feature car passed into the hands of current owners, Monaco-based SAM Amstar in 2018, with Claudio Roddaro its driver/guardian. He became infatuated with Porsches some 20 years ago. Roddaro acquired a 911 2.7 RS by default, as the 375 GTB Daytona he’d gone to buy was not available, so he took the 911 instead. Since then he’s lost count of the number of Porsches he’s owned and admits to being obsessed with the marque. “With cars like the 2.8 RSR, 3.0 RSR—every time I see one, I want to have it!” he enthuses. 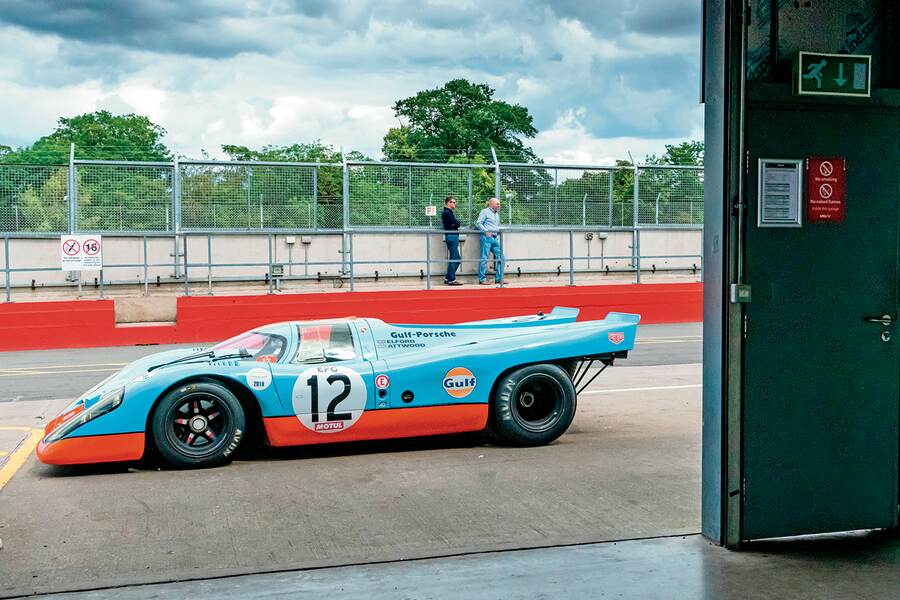 Roddaro took a phone call from well-known Porsche engineer and racer Jürgen Barth just before Christmas 2015, who informed him of a 917 for sale in America. That was the Martini-liveried #037 (which we featured in issue #254, May 2018). In 2018, he was offered #008 by its owner, French privateer Gérard Dantan Merlin, alias “Gedehem,” who raced 911s in the early ’70s, partnering Claude Haldi among others. When the car was acquired in 2018, Roddaro had the chassis and componentry crack-tested and discovered that magnesium does not last indefinitely. Indeed, a life expectancy of 30 years seems about right, so yet more extensive renovation was done, this time by Manfred Freisinger Jr.

Items such as the pedals, which were NOS and installed new during the restoration, along with hubs, were not in good shape, despite the car being unused. As Roddaro says, “When people talk about original matching components, they have no idea. That’s because the material is 50 years old and you can’t fix it, so you have to make it new.”

Roddaro raced #008 at 2018’s Classic Le Mans, Monza, and Dijon, plus the Hungaroring in 2019. “This 917 is completely different to most race cars,” he says. “It’s a car that you race with your brain. You need to keep control of everything because it’s very easy to let the car get the better of you. But when you’re used to the car, then you can enjoy it.” And now, at Donington, I’m about to get behind the wheel of #008. 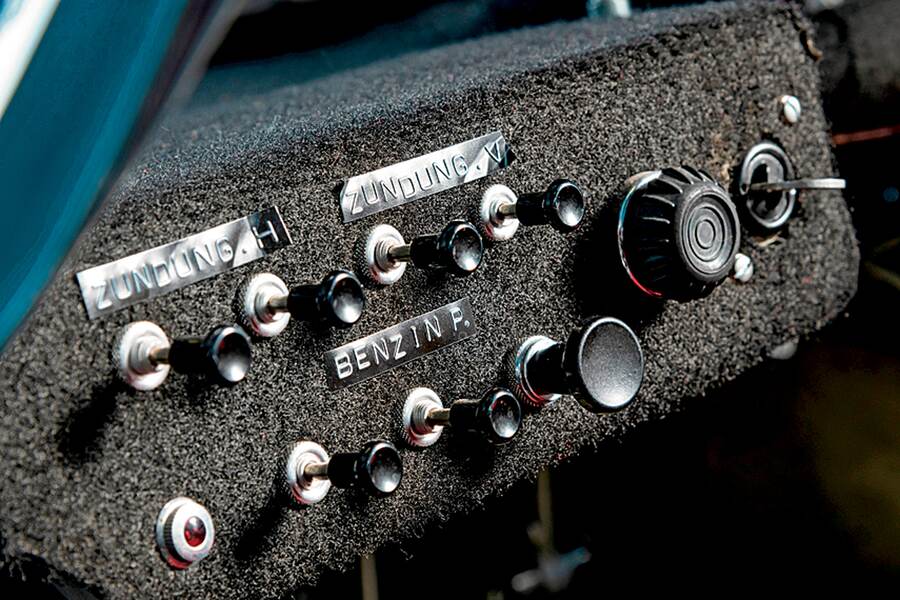 In the pit lane, I clamber aboard: one foot on the broad door sill, the other on the seat, then slide down under the large, thin-rim steering-wheel. I’m almost recumbent, and yet my helmet is right up against the roof bars. The five-speed’s gearshift pattern is conventional, but its lever mechanism wouldn’t disgrace a tractor. Roddaro’s mechanic Matteo fires it up, and I blip the throttle to extinguish one of the two alternator lights.

This 917 is quick as I accelerate from the pits—993 quick, to give you a comparison. But I’m not pushing it one bit. You build up to these things gradually, of course, corner by corner and lap by lap. But what I’d expected would be a relatively daunting, dragon-slaying prospect proves to be quite an easy car to drive. Although it is a tad twitchy on Donington’s two longish straights, this iteration of #008 is perfectly controllable. Once up to speed, I’m driving around most of the circuit in fourth and fifth gears, dropping down to second for tighter corners.

Here’s what a lap of Donington Park consists of: The 400-yard long Wheatcroft start-finish straight pitches the car into Redgate, an awkward right-hander with an immediate apex. Then, easing out left towards the Craner entry, there’s a shallow right before plunging to a tricky right-left including the Old Hairpin alongside the viaduct ruin to the left. Then it’s power on to surge uphill on Starkey’s Bridge to a tight-ish right, faced with a blind crest concealing McLean’s, a sharp right. That leads onto Coppice, a fast right, and the long 300-yard Starkey’s Straight to the chicane-style Esses, running over the kerbs at each one. 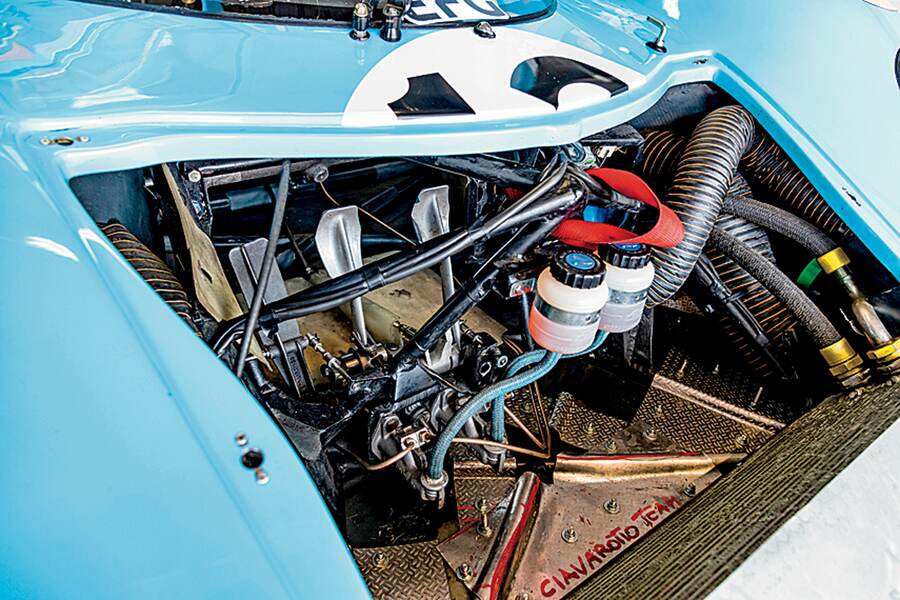 Then there’s a medium-long straight, and I drop down to second gear for the tricky Melbourne hairpin. Full throttle and the back-end squats for the dash behind the paddock to another hairpin, Goddard’s. Then it’s power down in second on the exit and then barreling down the main straight again. No time for nerves, just drive at 75-percent and not even 90-percent, and we should be able to keep it on the asphalt. Hubris strikes the unwary. But, we are in a Le Mans car, and these machines do not take being coddled well. “Drive it like you mean it,” I tell myself, “but take your time to build the pace!”

With 500+ hp and an all-up weight of just over 2,000 lbs, its performance is unquestionably phenomenal. The massive torque is instantly apparent, and there’s a huge amount of power available. Handling is flat, the ride is surprisingly soft, and the steering is compliant. Turn-in is instant and inch-perfect, with almost no effort hauling on the vast, bus-sized wheel rim. Despite the weirdness of the driving position and constant contact of my helmet against roof bars, I settle in reasonably quickly and go faster and faster. Driving a 917 is one of life’s Nirvana experiences.

Indeed, it’s been a thrill and a privilege to have had a go in this 917. Not only have I glimpsed what Claudio Roddaro can do with this car, but I also got to operate a machine that Vic Elford, Richard Attwood, and Mike Hailwood once handled. That writhing, snarling beast I thought I was going to have to wrestle with is—if not a pussy cat—a massively over-engined classic racing machine. The 917 is like an overgrown 914-6 multiplied tenfold! 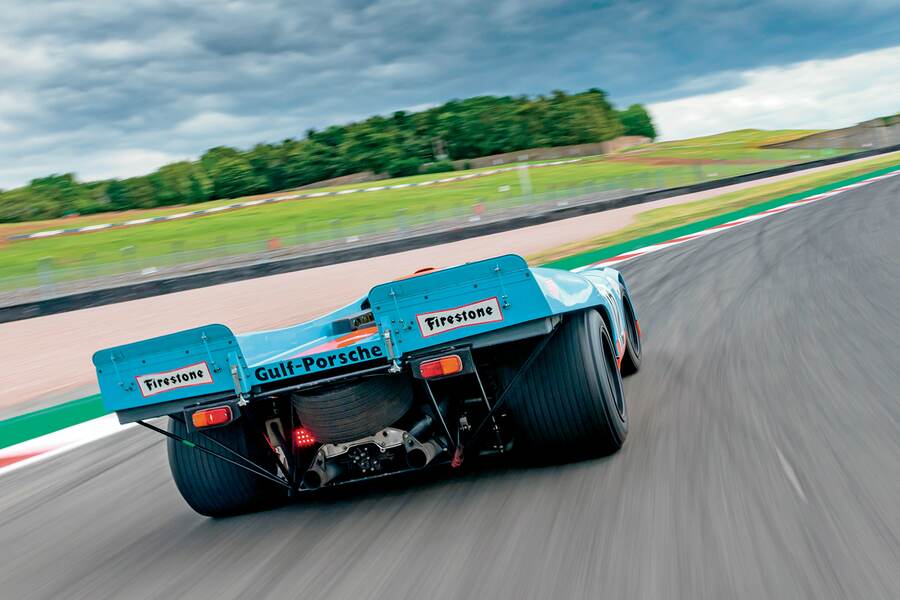 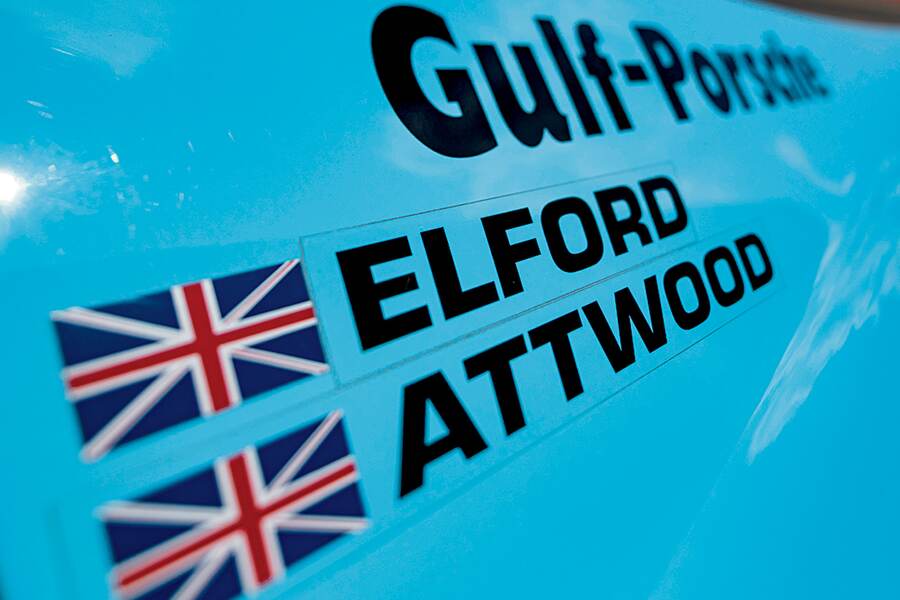 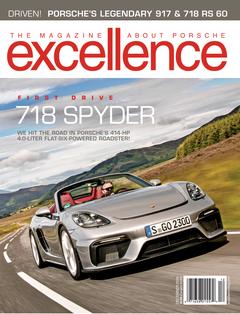