On the road in a 959 originally used for pre-production testing. 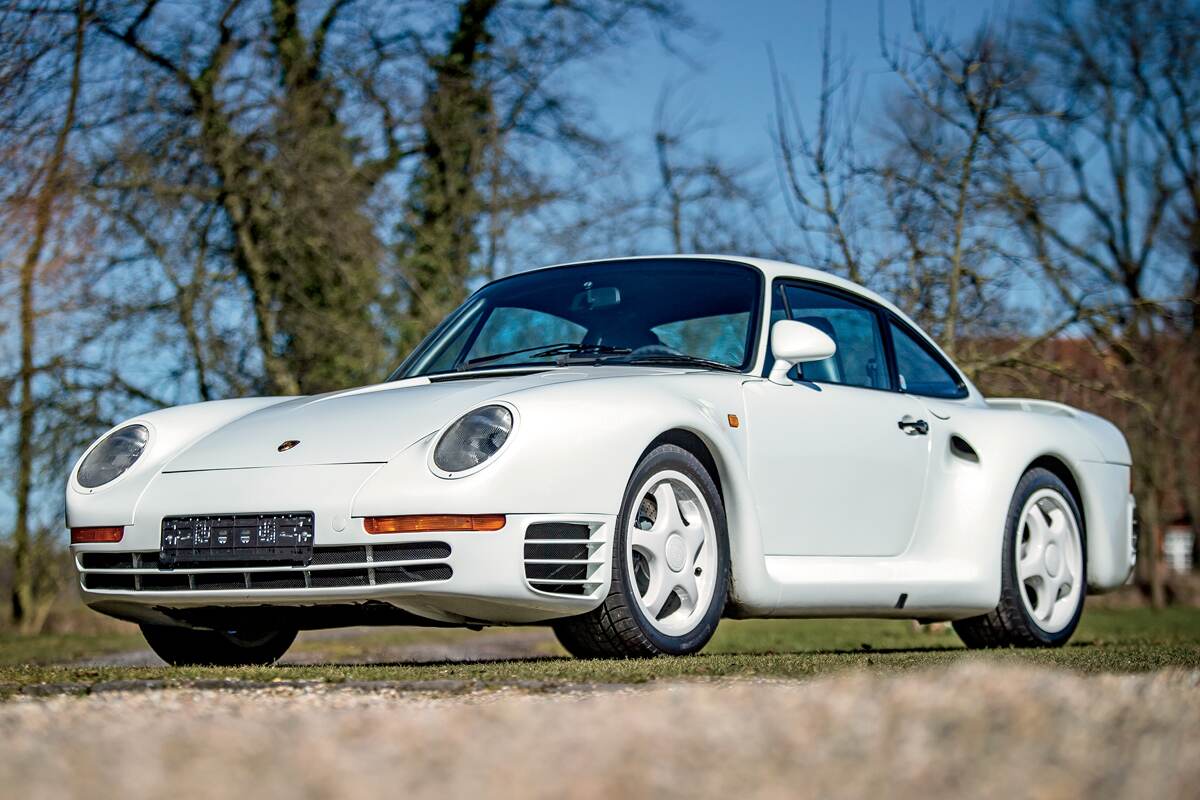 In the 1980s, Porsche didn’t just add to the 911 legend. With the 959, the world was presented with the first modern Porsche supercar, which in many ways turned the page to a whole new chapter in automotive history. Any of the 337 (or 329—production numbers vary), made are noteworthy machines, but the example seen here has the provenance of not only being a prototype, but also the 959 that was first owned by Dr. Ferdinand Piëch, the grandson of Ferdinand Porsche and father of the Le Mans-winning 917.

I was invited by enthusiast Jan Lühn to a secret location in the German countryside to see and drive this twin-turbocharged marvel. I knew he had to have something extra special, as the last time he called me, he invited me to check out the 917 that was featured in the May 2018 issue (#254) of Excellence.

Between 1986 and 1988, 282 Komfort (Comfort) and eight Sport models were made, with an additional six more put together into full cars from the parts inventory for a wealthy client from Macau a few years later. The 959 on these pages is serial number WPOZZZ93ZFS010065, but its chassis is marked 930-065 (meaning it started as a 911 Turbo tub), as it was one of the 29 pre-production prototypes used for testing and press activity in 1986. Most of these prototypes were dismantled and discarded, but four of them managed to survive. Of those four, this is one of two that are known to still be running. 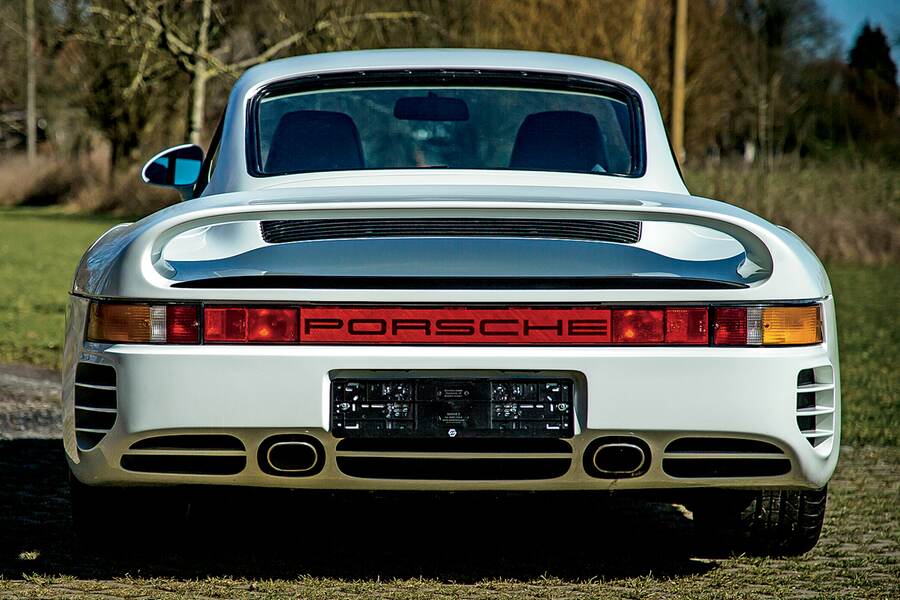 This 959 came with a thick folder full of 30 years worth of sales receipts and service invoices. The first shows that the car’s second owner bought it from Piëch in 1987 with 58,000 km (36,039 miles) on the odometer, which isn’t too unusual for a hard working prototype. Lühn was told by someone “in the know” at Porsche that this particular car was upgraded by the factory with bigger turbos, Schaefer cams, and a different exhaust. This, however, can’t be confirmed with any of the car’s paperwork.

“It’s a Komfort model, like most 959s, says Lühn, “but Dr. Piëch was once the director of Porsche Motorsport, so it makes sense he wanted something with more power.” Or maybe it was something more serious than that. Lühn wonders if #065 was also used as a testbed for the limited number of 959 Ss that had their power increased from the standard 444 hp up to 508 hp. This will have to remain as pure conjecture, though, as no information about its life as a working prototype was kept on file.

The full history of #065 as a “normal” car is much better documented. Piëch owned it for a bit less than a year before selling it to a family friend, chef Hasi Unterberger, in Austria who kept it for three years and put another 1,500 km (932 miles) on the clock. It was then sold to German automotive photographer Rene Staud, who drove it for another 5,500 km (3,417 miles) in seven years of ownership. The car changed hands a few more times before Lühn came across it last year with 71,000 km (44,117 miles) showing on the dial. 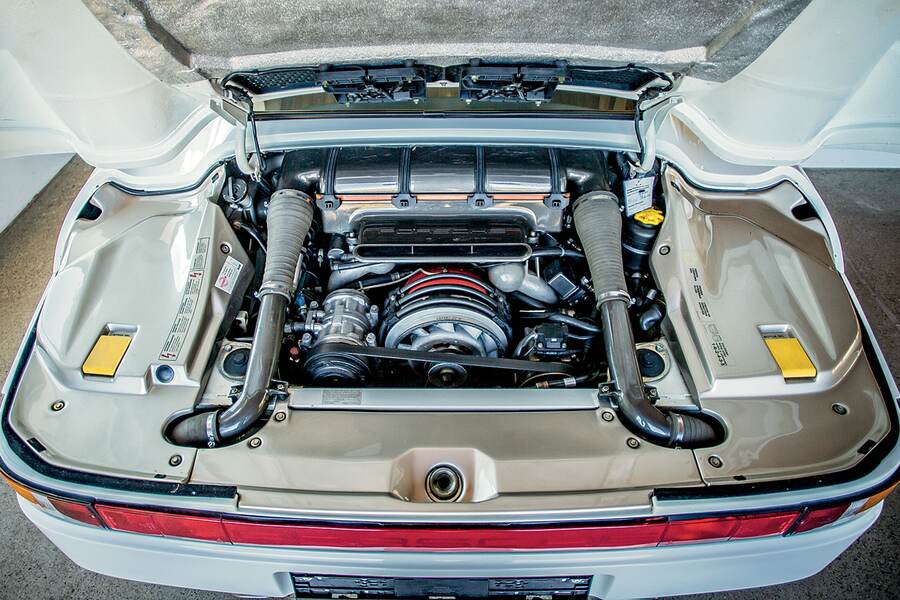 To ready the car for road use again, #065 was taken to a Porsche dealer in Dusseldorf, one of the few places still authorized to work on 959s. As well as the specialized tools needed, the mechanics require special training for the extremely sophisticated (yet antiquated by modern standards) systems, which includes a total of seven onboard computers. Until the 918 Spyder was released in 2013, the 959 was the most complicated and specialized road-going Porsche to work on.

“I’m an ’80s kid,” smiles Lühn. “The first car magazines I ever read had the 959 in them, and it was the first car that really amazed me. Its rivals, said other people, were the Ferrari F40 and Lamborghini Countach. Although those other cars had beautiful bodywork and hugely powerful engines, the 959—with its staged turbos, active suspension, and intelligent 4×4 system—was so much more advanced that it was futuristic! It was made for motorsport, but it didn’t get to compete much. I think it’s a pity it never got to show its true colors in competition.”

The 1980s were arguably Porsche’s most successful decade in motorsport, with the 956 (and later the 962) dominating the Group C era of sports car racing. This was especially true at the 24 Hours of Le Mans, where Porsche scored seven overall wins in a row from 1981-1987. Although these prototype race cars brought sporting glory to the company, there wasn’t much in the Group C cars that could be related to anything found on Porsche showroom floors. That is one of the reasons Porsche policy directors were attracted to building a car for a proposed Group B circuit racing series. 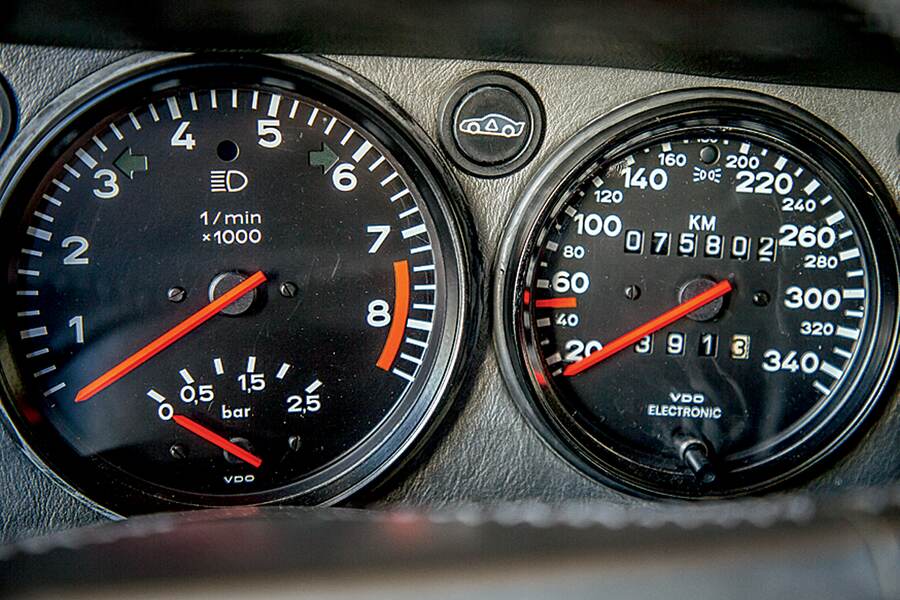 Intended to be made according to rules similar to those of the legendary rally cars of that era, a technologically advanced Group B Porsche that could also be sold as a road car to customers had presented a considerable upside for marketing and sales. History didn’t quite work out for them, though.

A series of tragic accidents involving drivers and spectators prompted rally organizers to switch to 2.0-liter mass produced Group A cars, rendering the planned Group B supercars obsolete overnight. The Group B sports car racing class never took off either, as Ferrari’s 288 GTO Evoluzione was the only other car signed up, so the series was scrapped before it even began.

Still determined to compete with the 959, Porsche adapted it to meet the rigors of the African desert, and the 959 concept was fully proven with the 1-2 domination of the 1986 Paris-Dakar Rally. But besides a seventh-place overall finish at Le Mans in 1986, the 959’s racing career turned out to be far shorter than anyone would have thought when development started back in 1981. 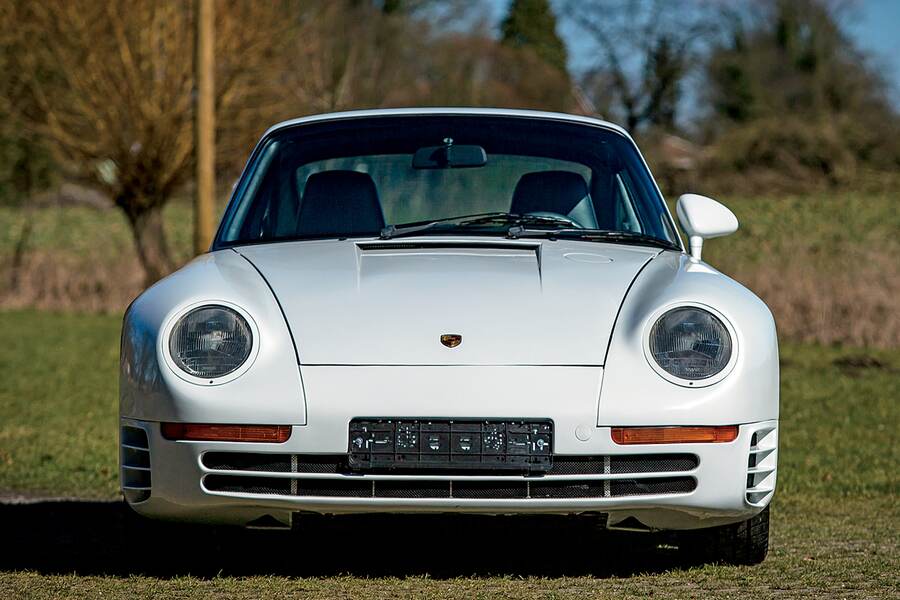 The road cars, however, enjoyed a much better run. Despite being released over a year behind schedule (because of delays with integrating ground-breaking technology) and costing twice as much to build as initially believed, the 959 was celebrated as the most advanced road car of its time by media outlets.

Some car magazines might be content just to photograph and examine this 959, but not us. Lühn is also one of those fine people who know that the real experience of a special car comes from driving it. To warm me up from an hour of taking photos in the freezing cold, he hands me the keys, complete with a small toy 959 on the end of the chain.

The 959’s body is beautiful and evocative. I had a treasured Matchbox model of this car when I was a boy, so it is with a thrill of anticipation that I open the door. The doors and the hood are made of aluminum, but most of the other panels are made with an aluminum and kevlar composite called Aramid (a.k.a. Kevlar), a compound more commonly found in aerospace components and bulletproof vests. Despite being lighter than a standard 1980s 911 door, the aluminum door doesn’t feel significantly lighter than a steel one on a regular 911. 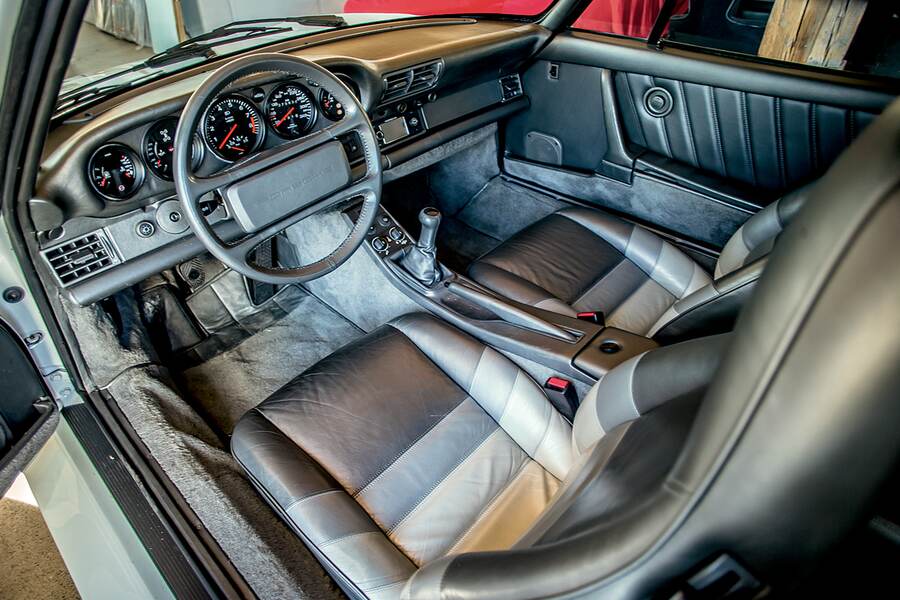 Inside, too, my first impression of the 959’s interior is that it feels very similar to one found in a 911 of the same period. If you know where to look on the dashboard, though, you will spot a few small differences. To start, the suspension settings light with the 959 body shape on it. There are also gauges for the amount of rear differential slip and power being sent to the front axle. But the “normalness” continues when I turn the ignition key. The water-cooled 2.85-liter twin-turbo flat six isn’t derived from any road car, but from the Group C-dominating 962, so I’m expecting it to come to life with a roar. Surprisingly, however, it starts with the sound of a normal Porsche.

Finding first gear and easing off the soft clutch, we pull away. But the slight cognitive dissonance continues as we crawl forward down the driveway to the sounds of gravel crunching under the tires. The road then joins a farm track with all the associated smells and substances on the road. Driving through a thin film of agricultural slurry in a car that would make a perfect museum piece feels like sacrilege!

I finally reach a wider tarmac road where I can stretch the car’s legs. I open the throttle and go through third, fourth, and fifth gears but—while the ride is nice—it is nothing spectacular. It feels like it could be in pretty much any Porsche made in the same period. 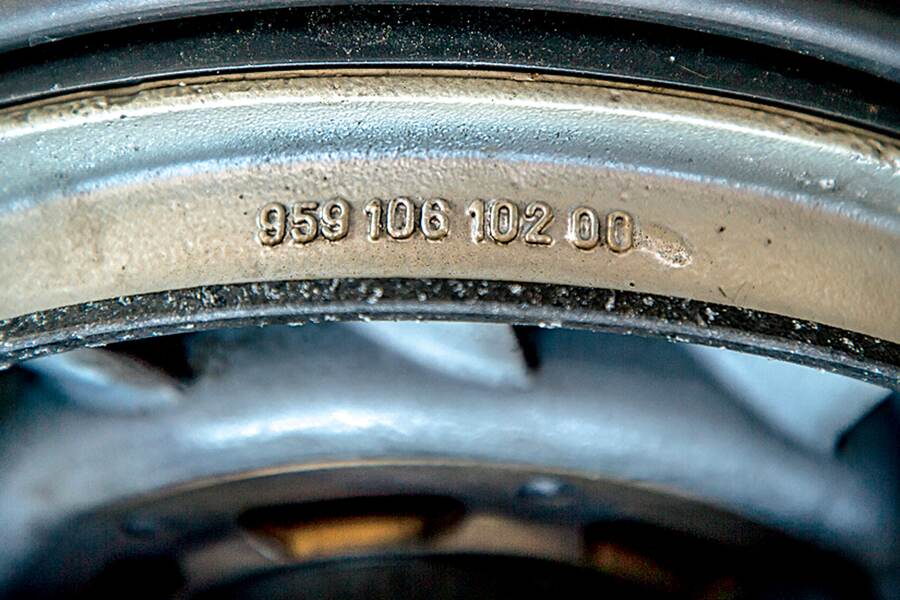 While stopped at a red light, Lühn reaches over to turn the suspension switch on the center console, as the ride height was at the highest setting to get on the main road without scrapping any bodywork. I hear the brief whirr of a hydraulic pump taking oil out of four of the eight shock absorbers and then feel the smallest sensation of the car settling down ever so slightly. “Go for it,” Lühn smiles as the light changes.

The grip from the active 4×4 system (which was later re-engineered in a much simpler form for future road-going 911s) is phenomenal, and the force of acceleration is just astounding. Lühn’s adjustment has made a difference. The claimed 0-60 mph time of 3.6 seconds—which is still modern-day supercar territory—feels like it is accurate, despite the fact that this car is more than 30 years old!

PSK, for Porsche-Steuer Kupplung (Porsche Steering Clutch), is an active system on the 959 that moderates torque to the wheels depending on acceleration and road conditions. It is of the innovations that made this car a technological marvel when it was released, and it is an absolute pleasure to experience firsthand. 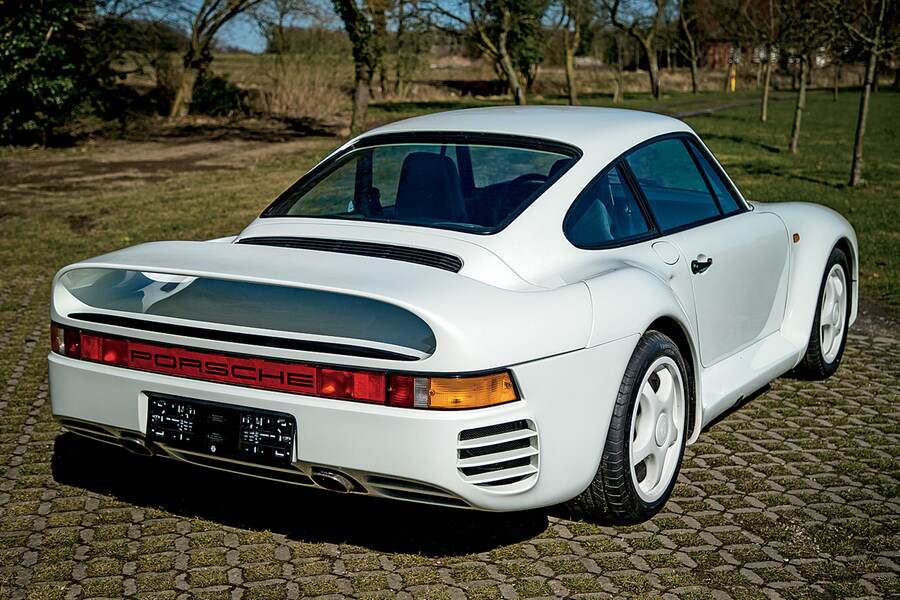 “OK,” Lühn nervously coughs. I look at the speedometer and am surprised to see the needle quite a few degrees further around the dial than I expected, well above the double-digit speed limit. The ride is so smooth and quiet that I didn’t realize how fast I was going. Honestly, officer.

Back at home base, I chuckle at someone’s sense of humor as I take a photo of the little model 959 hanging off the keychain. But I notice something else, too. The older key has most of the color worn off the Porsche logo. It is quite a humbling feeling to realize that this paint was first worn away in Ferdinand Piëch’s pocket. In the end, the 959 is both a technologically advanced masterpiece and a legitimate supercar that still amazes. 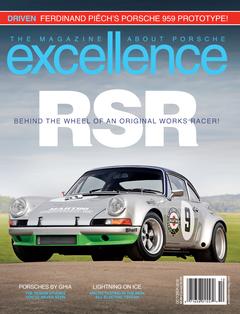