This hot-rodded 1972 911T is the right mix of comfortable and racy. 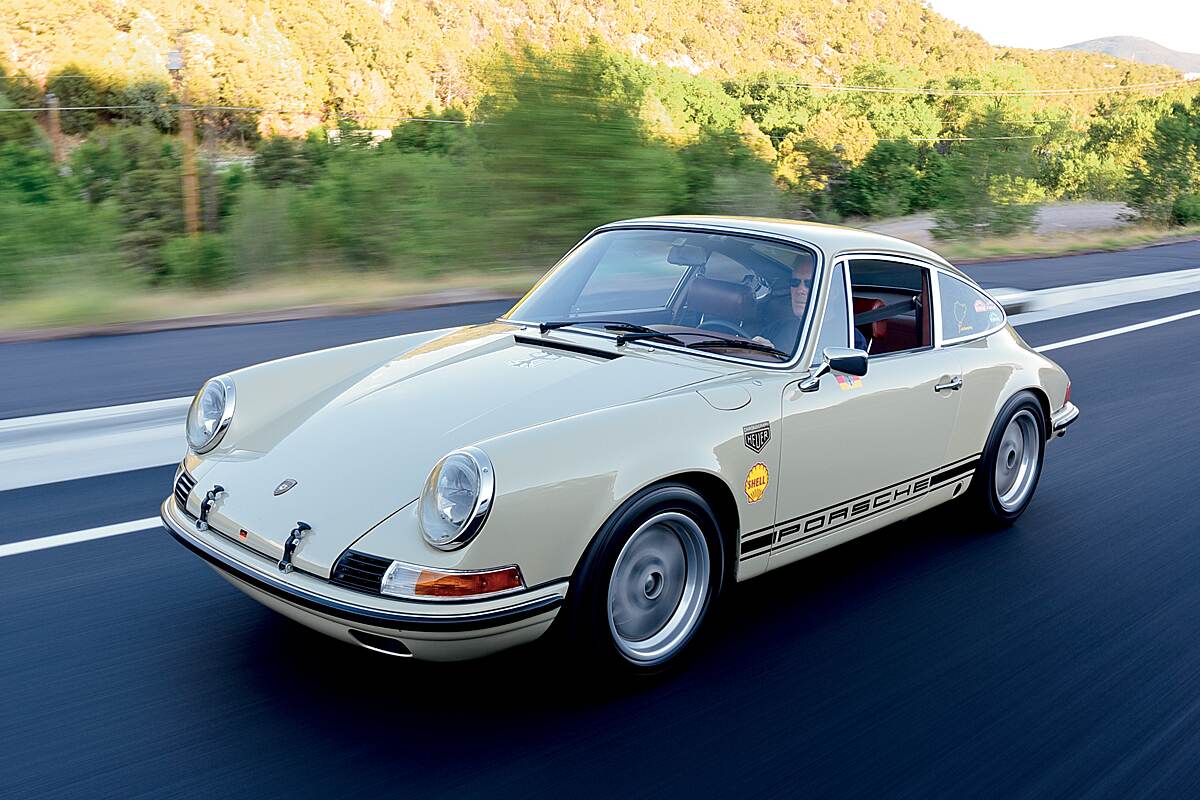 It would be understandable if one assumed the oldest of the bunch would be relegated to weekend use and “Garage Queen” status, but quite the opposite is true. Muir finds the vintage charms of the long-hood 911 impossible to resist on most days, so the car gets frequently driven in exactly the way its makers intended, which is in a spirited manner.

“The driving experience is pure, raw, visceral, involving, and extremely rewarding,” says Muir of his hot-rodded 1972 911T. “There are no ‘nannies,’ so it’s just you and the car. It really forces you to respect it and the laws of physics, so you drive it accordingly. You steer the car with light inputs and your right foot, with instantaneous feedback through the seat of your pants.” 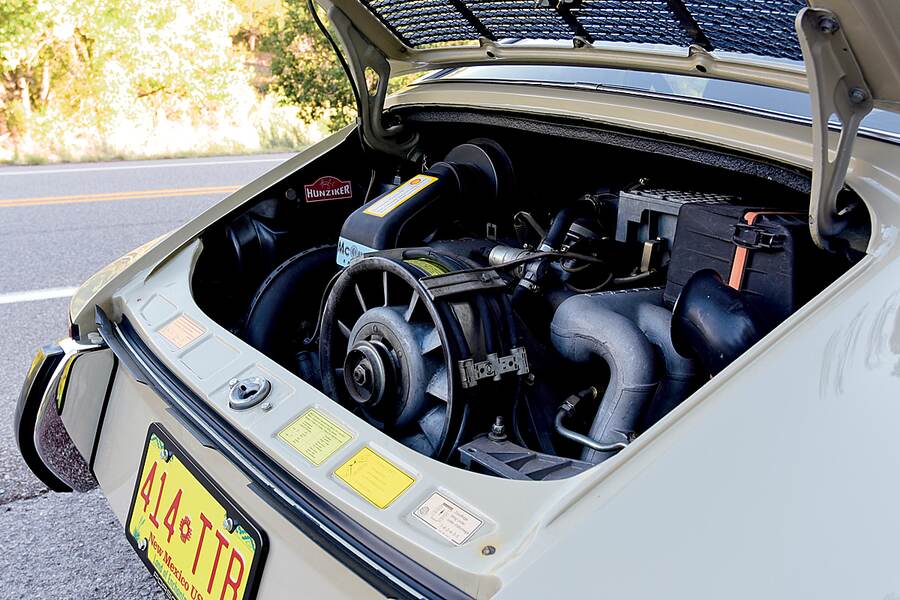 The worked 3.2-liter flat six provides plenty of acceleration in a lightweight package.

For Muir, the appeal of the Porsche brand is the unrivaled combination of engineering, reliability, handling, performance, and style embodied in its products. His love of the marque was sparked in the mid-1970s when he saw—and more importantly, heard—a 911 for the first time. The sound of the German car’s flat-six engine left a permanent imprint on his conscious. “It was completely foreign compared to the American muscle cars of Ford, GM, and Chrysler,” Muir recalls. He was also highly intrigued by the Porsche’s singular styling and unique engineering. At the time, though, the European sports car was expensive and far out of reach of his modest means.

It took several decades of hard work, but in 2005, Muir made good on his long-lasting goal of acquiring a Porsche when he bought a lightly used 2004 Boxster with a scant 1,200 miles on the odometer. “I test-drove a pre-owned 996-generation 911 and a pre-owned 986-generation Boxster,” he recalls. “The latter handled like a go-kart compared to the 911.” Having never previously driven either car, he concluded that the handling of the rear-engine 911 was not quite up to that of the mid-engine Boxster. He also is quick to admit his bias was based on his lack of appreciation of the 911’s unique rear-engine driving dynamics.

That first Boxster opened the door to Porsche ownership, but Muir’s taste in the various models and chassis configurations has evolved with time. As a result, he’s become a devoted 911 driver. Although he still has a deep appreciation of the company’s mid-engine machines, he’s owned six 911s through the years.

Around 2012, Muir decided to go vintage in his 911 ownership experience and began the search for a modified long-hood example. Around the same time, a good friend ended up purchasing just such a car in Southern California and brought it back to New Mexico. Paul Kramer at AutoKennel in Costa Mesa, California had consigned it on behalf of enthusiast Bill Kelly, who had originally modified the car with a factory Sports Purpose-style ethos. 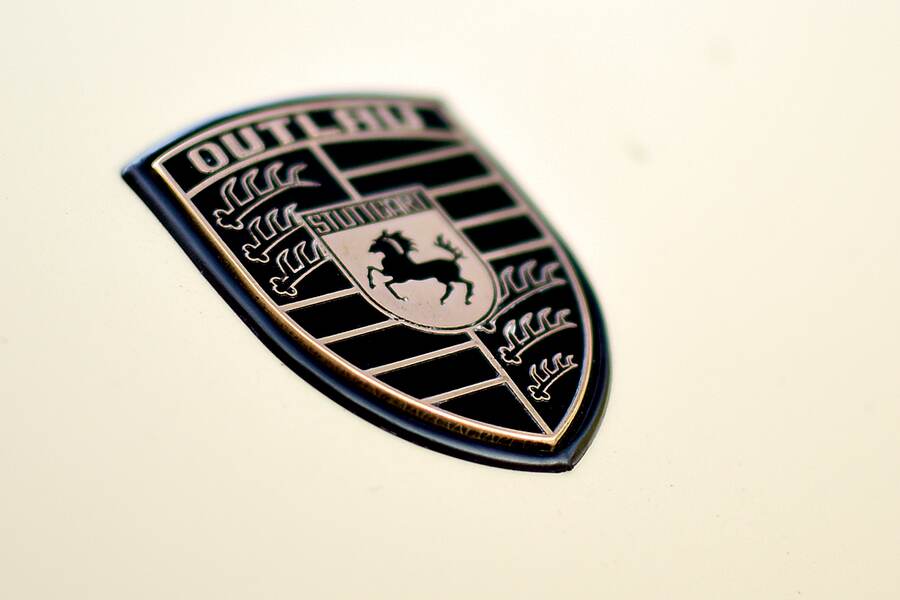 A custom “Outlaw” hood crest leaves no doubt to this 911’s intent.

“The car had languished as an uncompleted project when Kelly discovered it,” explains Muir. The 911 had originally left Germany in mid-1971 bound for U.S. shores painted Sepia Brown and equipped with a Brown Leatherette interior. The 2.4-liter 911T engine was mated to an optional four-speed Sportomatic semi-automatic gearbox. Other options installed at the factory included upgraded Koni shocks (rather than Boge units), 15 × 6-inch “Light Metal Wheels” shod with Dunlop tires, front and rear stabilizer bars, the Comfort Equipment option, and tinted glass all around.

The car’s early history is hazy, but its story picks up years later when Kelly acquired it. The Porsche had been disassembled at some point in anticipation of a restoration, but regardless of how well-intentioned it might have been, the project was abandoned. When Bill Kelly came into the picture, though, the car was given a new lease on life.

The original engine was replaced by a 3.2-liter Carrera-spec six that was built by Dave Bouzaglou and his team at TRE Motorsports in Van Nuys, California. A 3.0 engine, sourced from a 1983 911 3.0 SC, was completely disassembled and rebuilt with a stroker crankshaft and pistons, resulting in 3.2-liters of displacement. The stock Bosch Motronic fuel injection was retained. In the interest of retaining heat and keeping the car usable in all conditions, the stock heat exchangers were also retained, though the stock muffler was replaced with a two-in-one-out Bursch muffler. 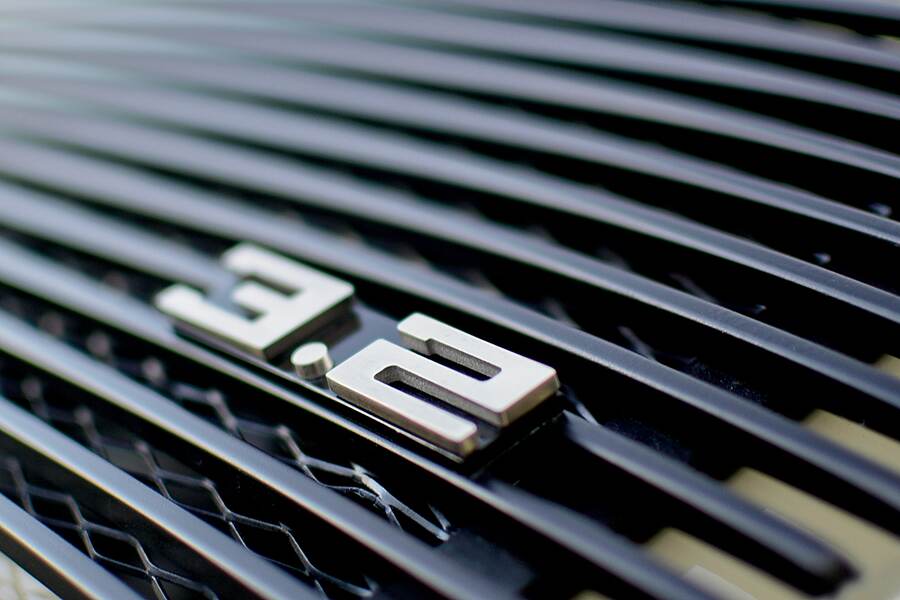 When this 911 was tested on a chassis dyno, the 3.2 pumped out 192-rear wheel horsepower, certainly enough power for a 2,300-lb 911. The oil cooling system was upgraded with a mid-1980s Carrera oil cooler installed in the right-front wheel well that is connected to the engine with hard lines. In place of the original steel gas tank is a larger capacity and lighter 85-liter (22.45-gallon) plastic tank of the same type that was fitted to the 1973 911 RS 2.7. The original gearbox was replaced with a traditional Type 915 five-speed.

The exterior of the car was repainted from the original Sepia Brown to Beige Grey, a lighter shade that was also available in 1972, keeping it period correct. Changes to the car’s interior were far more extensive than what was done on the outside. The entire inside of the vehicle was reupholstered in leather that was sourced from Argentina in a unique shade called Redmond Mocha that Muir says resembles Chestnut. Originally, the leather was liberally applied to the dashboard, kneepads, door panels, door top trim, and the seats, the latter of which are RSR-style seats that were sourced from TRE Motorsports. 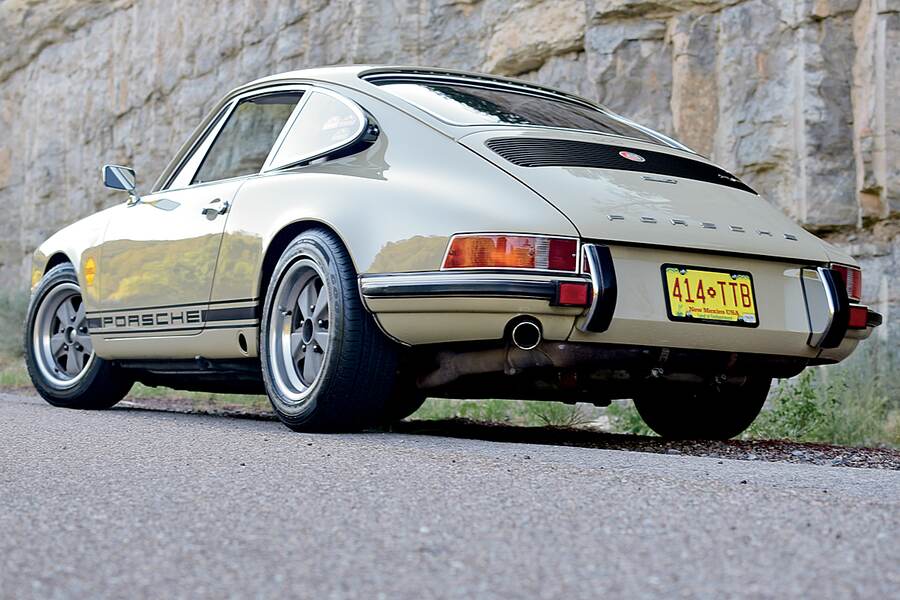 Eventually, Muir’s friend decided to sell the 911. The timing was right for Muir since the car became available while he was still on the hunt for an early 911. Since acquiring it, he’s added a handful of period correct decals to complement the Porsche script that runs down the Porsche’s flanks.

Muir also made a few alterations and additions to put his own aesthetic stamp on the car, primarily centered around the interior. In an attempt to tone down the monochromatic look that the extensive use of the admittedly gorgeous leather provided, he had House of Covers in Albuquerque convert it to a tri-tone look. The brown door panels were replaced with black 964 RS America-style panels with tan door pulls. Likewise, the centers of the seats were redone in black with the correct German corduroy, down to the correct five-per-inch rib count.

“IT REALLY DOES TRANSPORT ME BACK TO AN ERA OF CARS AND DRIVING THAT WE’LL NEVER EXPERIENCE AGAIN.”

A tan-colored German square weave carpet kit was also installed which in-turn was topped off with black and terracotta Coco Mats. Adding a bit of brightness to the interior are brushed aluminum gauge rings and machined aluminum door locks. Mounted to the passenger’s side dash are authentic Heuer black dial Trackstar seven-jewel stopwatches, a surprise gift from Muir’s wife. Muir also installed a Wevo Classic shifter to tighten up the notoriously vague shift feel of early 911 gearboxes. 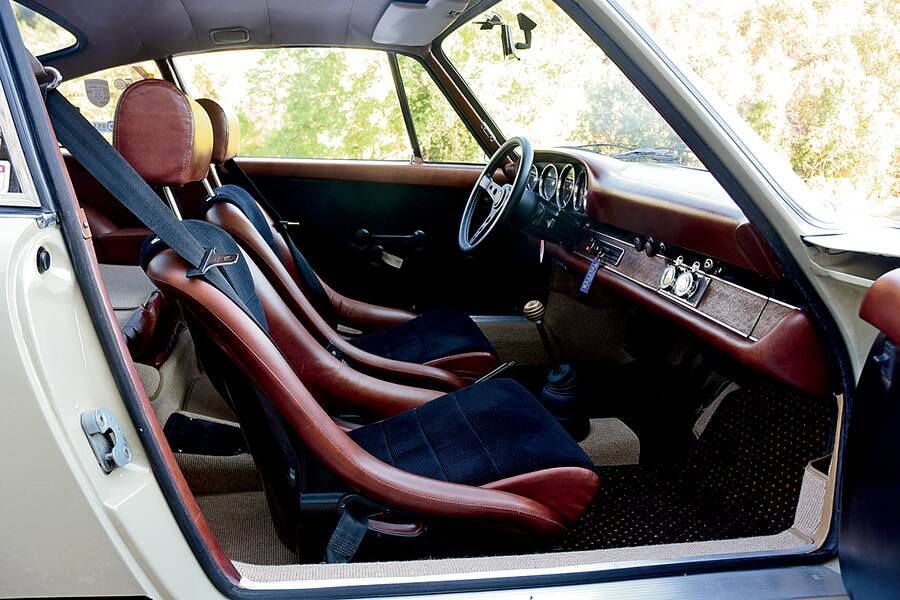 Muir’s take on an R-Gruppe interior.

Elsewhere, the stock and somewhat feeble original headlights were replaced with far brighter (not to mention safer) LED headlights from Audette Collection in Sisters, Oregon. There are also blacked-out horn grilles and a chrome cap for the empty radio antenna hole.

With the car altered a bit to suit his style, Muir has been putting as many miles on it as possible. “I rotate driving it among my 1998 C2S and 2010 GT3, but find myself driving it most,” he says. “I drive it to Cars and Coffee, on local driving tours and R Gruppe events.”

Speaking of the R Gruppe, ownership of this hot-rodded ’72 911 opened the door to membership in that club, which is dedicated to celebrating Porsches modified in the factory’s Sports Purpose style. The group of like-minded enthusiasts also spend a lot of time behind the wheel during their frequent driving events, ensuring that the cars are used as intended rather than hidden away in climate-controlled garages. 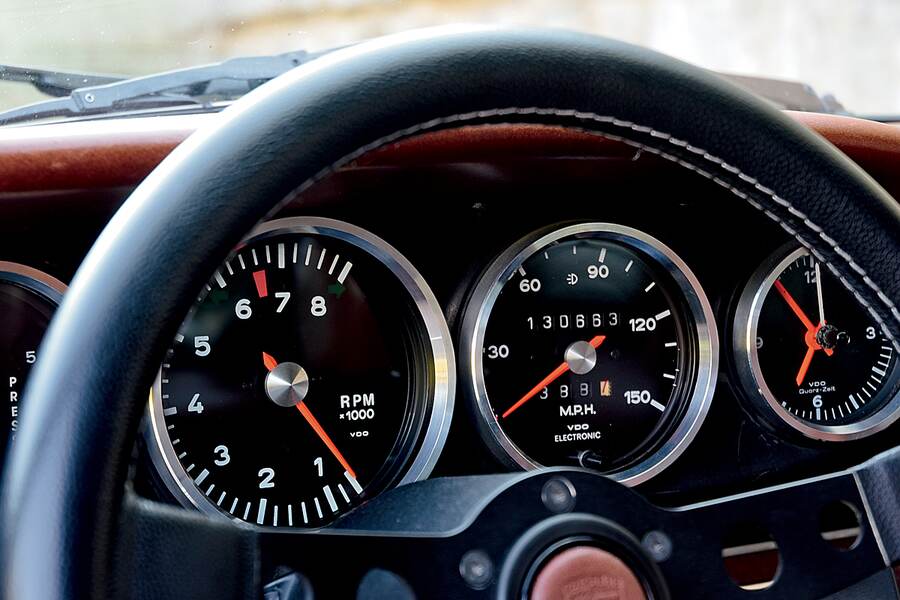 Brushed alloy gauge rings add some flash to the interior.

Muir was invited to an R Gruppe Treffen event in Napa, California. There, founder Cris Huergas chatted with him about his ’72 T in what Muir described as a casual interview. Muir’s Porsche passed muster, as did the owner himself. “Cris told me, ‘The 911 can have attitude, but the owner cannot,’” Muir recalls.

Joining the R Gruppe has afforded Muir even more opportunities to drive the T. “In my brief membership I’ve driven the car to R Gruppe events in California twice, the Bergrennen (Mountain Racing) event in West Virginia, as well as the Texas Hill Country Rally. It’s no garage queen and the 911 I drive the most!”

While it offers plenty of the undiluted early 911 character that makes these cars so appealing, it’s also encapsulated in a package that is relatively refined and accommodating. Once seated in the comfortable RSR-style seats, it’s business as usual for a hot-rodded long hood. The three-spoke Momo Prototipo feels great in my palms, and the balsa wood shift knob perched on the end of the aluminum Wevo shift lever is just a short drop away from the wheel. With a twist of the ignition key, the 3.2-liter short stroke growls to life. The sound is a smooth flat-six whirring overlaid with a deeper exhaust burble swirling melodically into the cabin.

Typical for an early 911, the clutch, shifter, and throttle applications require a deft touch to depart from a stop smoothly. The ride is firm but far from race-car stiff, the front end feels light and responsive, and the back tires seem practically superglued to the asphalt. Overall, the driving experience is well balanced between the torquey Carrera engine and a refined but performance-oriented suspension as I wring it out down a twisty New Mexican backroad. 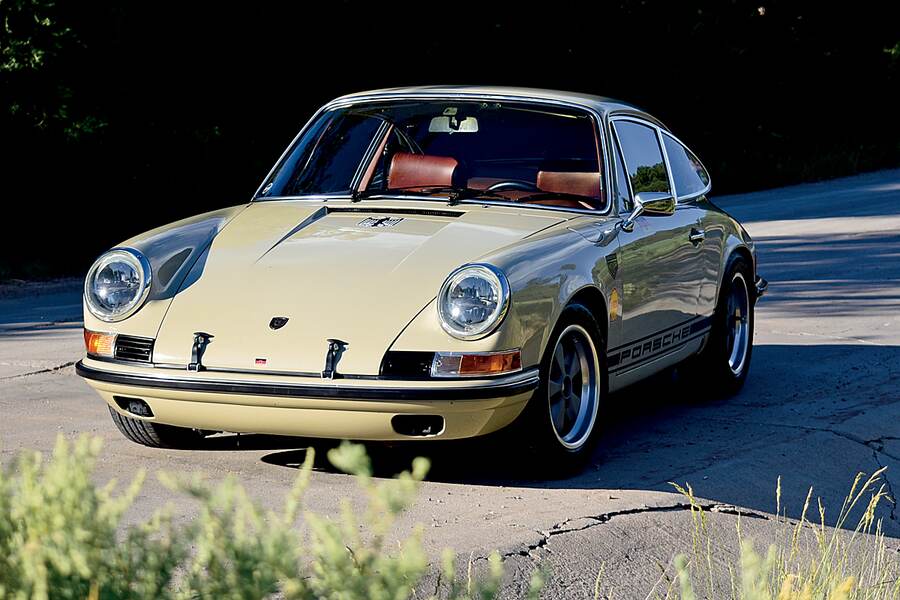 Muir’s 911 embodies the phrase “Gentleman’s Hot Rod” about as well as a vintage Porsche can. It’s easy to see why he drives the car as often as he does. “It’s a huge departure from Porsches of today,” he says. “It’s rewarding in a truly analog manner that cannot be duplicated. It really does transport me back to an era of cars and driving that we’ll never experience again.” 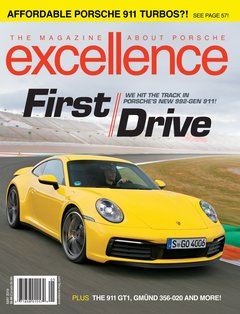