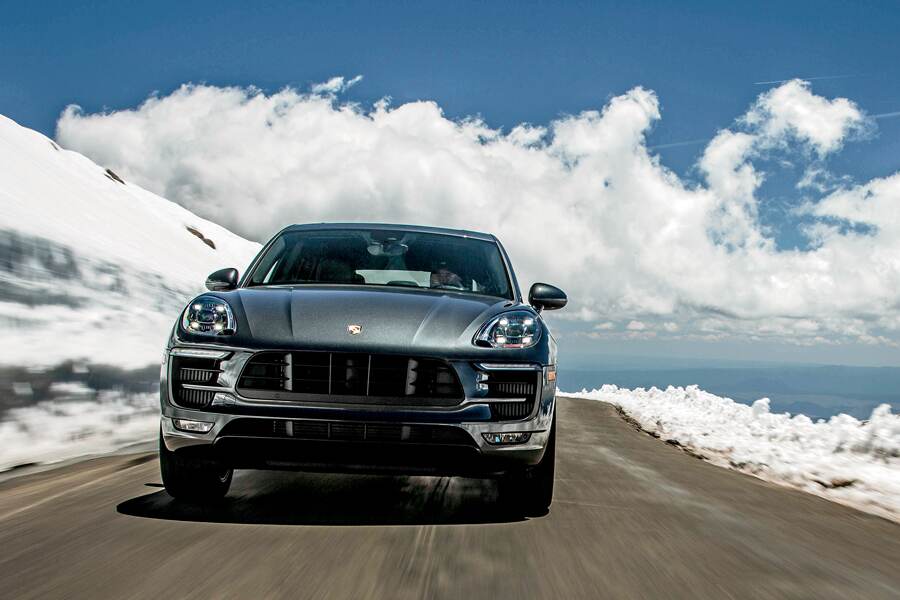 Today, four out of every ten new Porsches sold worldwide are Macan compact crossover SUVs. A sizeable portion of that volume comes from sales of the 252-horsepower inline-four-powered base model. Move up the Macan range, and you’ll find the 340-hp S, 400-hp Turbo, and 440-hp Turbo Performance Package V6 versions. There’s also a GTS.

Positioned between the S and the Turbo, the 360-hp Macan GTS is meant to deliver the best overall driving dynamics in the range while also being comfortable enough for daily use and on longer trips. To see if this iteration lives up to that premise, we’re taking one on a 650-mile drive that involves freeway and backroad driving as well as some light off-roading.

The Macan GTS is powered by the same basic 3.0-liter twin-turbo V6 engine found in the 340 hp/339 lb-ft Macan S. But thanks to a freer-flowing intake, a less restrictive exhaust system, and an increase in turbo boost to 17.4 psi (up from 14.5 psi in the S), the GTS has 20 more horsepower and 30 more lb-ft for a total of 360 hp and 369 lb-ft. As is the case with all Macans, its engine connects to a seven-speed Porsche Doppelkupplung (PDK) dual clutch automatic transmission.

Power goes to the ground through a Porsche Traction Management (PTM) active all-wheel drive system. This type of setup, which is more often found in sports cars than 4×4s, entails a multi-plate clutch, an automatic brake differential (ABD), and anti-slip regulation (ASR). 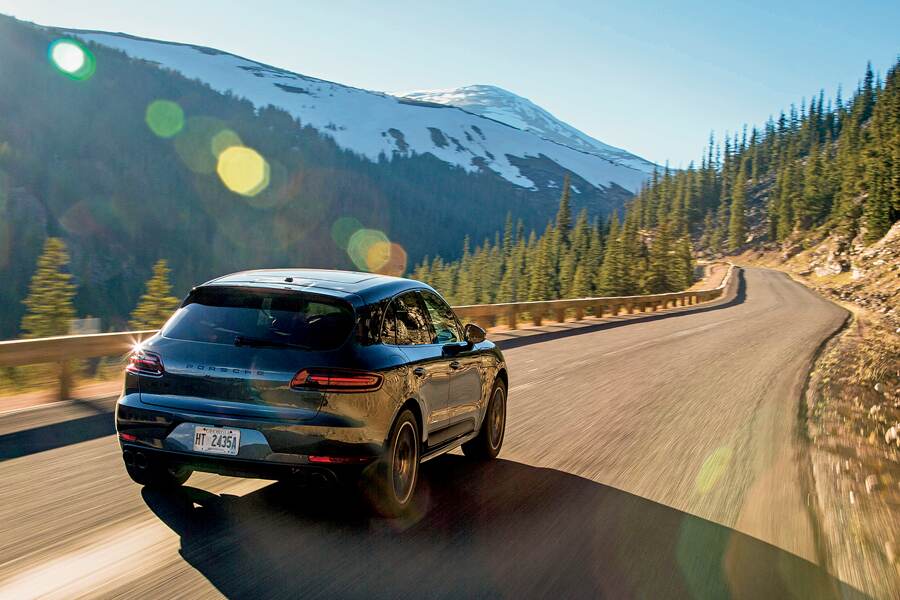 The Macan GTS gets standard air suspension (in place of steel springs found in the standard S) with Porsche Active Suspension Management (PASM) electronic dampers and a ride height 15.0 millimeters (0.60 inch) lower than the S. Steering is managed by either a conventional electromechanical power steering setup or the optionally available speed-sensitive Power Steering Plus. Stopping is done via 360 mm (14.2 inch) brake rotors clamped by six-piston calipers in front and 330 mm (13.0 inch) discs squeezed by single-piston calipers in back. Porsche Ceramic Composite Brakes (PCCBs) are also an available upgrade.

Among the main exterior changes are headlights with black inserts, smoked taillights, GTS lettering on unique matte-black side strips, a gloss-black roof spoiler, and flat-black-finished tailpipes. For wheels, the GTS gets flat-black (or silver, as seen here) RS Spyder Design alloys measuring 20 × 9 inches in front and 20 × 10 inches in back wrapped in 265/45R20 and 295/40R20 tires respectively.

Opening the driver-side door, we slide behind the heated steering wheel and find one of the most outstanding interiors we’ve ever encountered in a Porsche. Every square inch of Nappa leather, aluminum, and plastic is of high quality and finished to virtual perfection. While all contemporary GTS models get nicely trimmed Alcantara-laden cockpits, our tester has an even nicer setup. This SUV is equipped with the $4,790 Leather Interior with Alcantara and the GTS Interior Package, which adds leather to areas like the door panels and dash. While it may not sound like much, it manages to make the interior even more inviting.

The standard eight-way power seats are comfortable, but they take a lot of adjusting to reach a suitable seating position. When we lower the seat for a more sports-car-like feel, the cavernous space created above our head feels awkward. When we raise the seat up higher, we feel more comfortable but also less like we’re in a sporty vehicle. This may sound like excessive nitpicking, but it takes some time to feel comfortable with the seating position in the Macan. And this is something we’ve not really experienced in other new Porsche models. 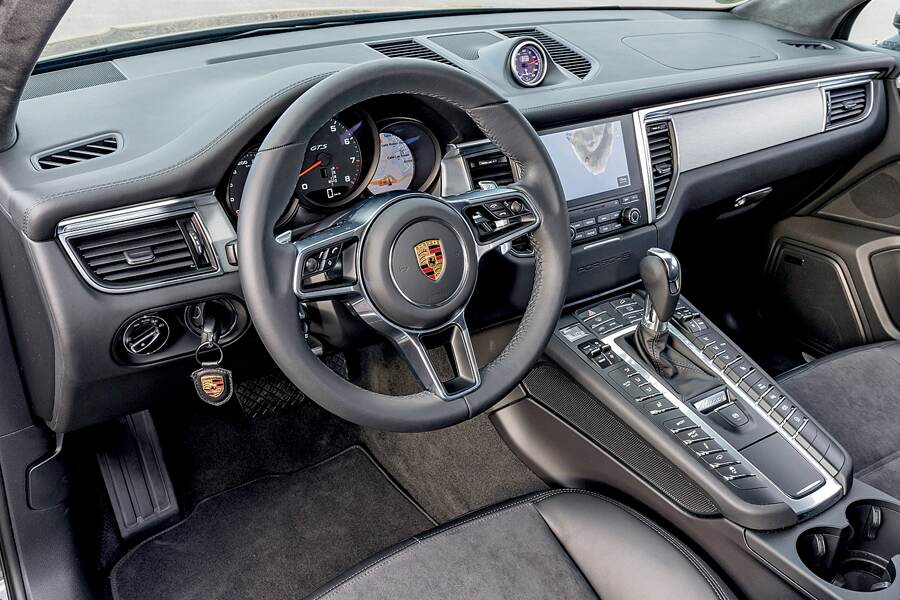 Next, we put our foot on the brake pedal and fire up the GTS. The turbocharged engine comes to life with the raspy sort of buzz from the standard Sport exhaust you’d expect from high-performance V6. It’s not an unpleasant sound, but it is also not as sweet as the notes you’d hear from a naturally aspirated or even turbocharged flat-six-powered Porsche. As far as V6s go, though, this one sounds tough.

Accelerating down an onramp, the Macan’s engine output feels acceptable but honestly rather unexciting. While this SUV can, according to Porsche, run from 0-60 mph in 5.0 seconds on its way to a 159 mph top speed, it doesn’t feel particularly thrilling. Perhaps that’s due to the expectations that come with the GTS badge, or because even the entry-level 2018 718 Cayman with a six-speed can hit 60 mph in 4.9 seconds and 170 mph.

As we make our way along the first 20 miles of our drive, we rotate the mode dial mounted on the steering wheel hub at the four o’clock position to different settings. In Normal mode, the ride is generally comfortable, but the air suspension produces a floating or slow bouncing sensation. In some instances at around 50 mph and above, it feels like the car is subtly rocking from front to back as it floats. In fairness, this isn’t something we encountered at slower speeds, and just turning the mode dial to the firmer Sport mode can quickly iron it out. Even so, this is an unexpected quirk.

After a stop for dinner, we’re headed on a 110-mile drive east to California’s Gold Country. This leg of the trip entails about 40 miles on state highways and backroads with the rest on the freeway. Before leaving, my wife and I load the Macan up with the usual sort of long weekend getaway luggage: two suitcases, two backpacks, a few grocery bags, and a fishing pole and small tackle box. While the Macan accommodates this gear with ease, its sloping rear hatch—which gives this SUV a sportier profile—makes fitting taller items near the back of the loading area more difficult. 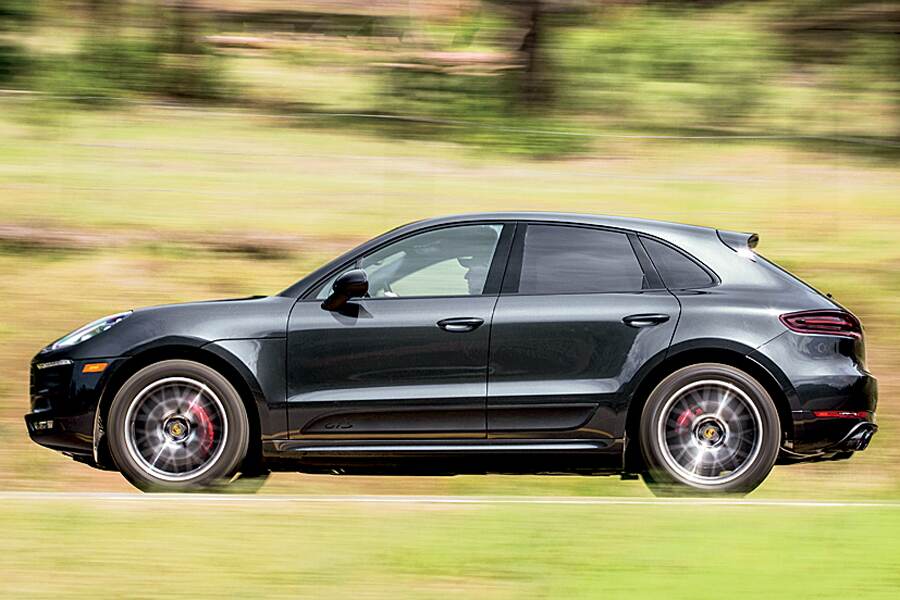 Back on the road, the freeway portion of this drive with the GTS in Sport mode yields a relaxed and uneventful experience. The $1,380 Lane Keep Assists (LKA) & Lane Change Assist (LCA) option package is useful. LKA automatically corrects steering and gives an acoustic and visual warning if it senses you’re straying from your lane. LCA illuminates small lights on the inside part of the side mirrors when sensors detect a vehicle in your blind spot. Both are useful, but the latter comes in handy a lot more often.

As we reach some windier sections of road, we switch between Sport and Sport Plus modes. When driving at about seven-tenths onto an onramp, we’re surprised by the amount of understeer the Macan produces. Even when equipped with $1,500 Porsche Torque Vectoring Plus (PTV+)—which controls power distribution to the wheels in a way that results in more agility—you can really feel the Macan’s 4,178 lbs through the corners.

It’s important to note that this machine came specially equipped with Michelin Latitude Alpin Winter tires, as we are headed towards a snowy area. Even so, our past experiences in Macan S and Turbo models with grippier all-season rubber also left us feeling like Porsche’s small SUV had too much understeer to feel truly sporty when pushed.

As we arrive at our destination, a cabin near Sonora, California, we choose to take a steeper driveway up to the house. This dirt and gravel road, which was originally made for trucks to tow boats to the lake at the end of it, is easy for 4×4s to handle but much more difficult for front- and rear-wheel-drive machines to tackle. With the Macan in Off-Road mode, we slowly make our way up the 30-50 percent grade. 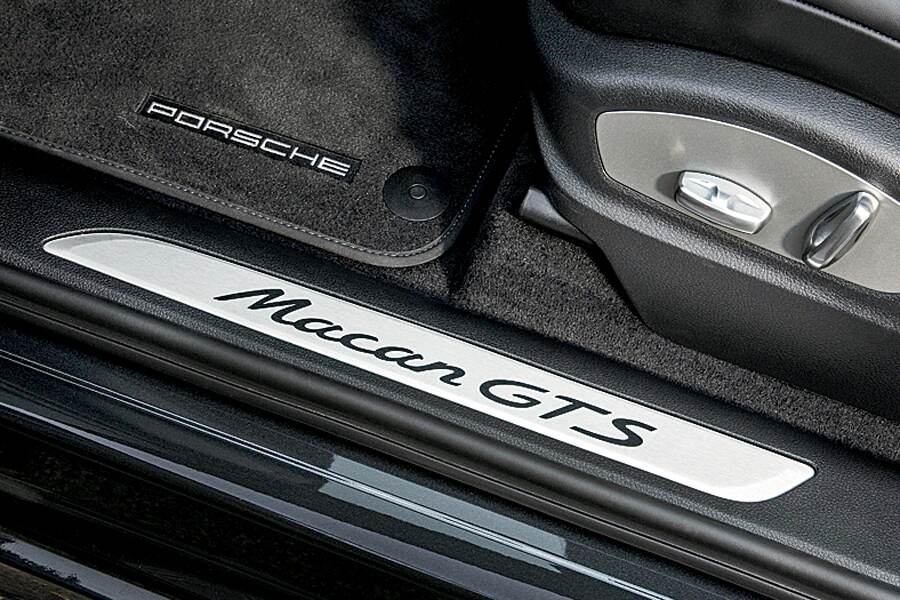 The worst thing about driving the Macan up this route is that the car’s optional ParkAssist system rings and howls almost continuously, as it thinks the overgrown grass on either side of the trail is a hazard. While the Macan weighs 1,025 lbs more than a base 911, it also makes it up the hill to the house over the challenging terrain without any drama. That would likely not be the case if a sports car were driven up the same route.

The next morning, we’re back in action on the twisty roads near the Stanislaus National Forest. From a functional aspect, the Macan is a perfectly competent grand touring machine. And as the miles roll by, we even warm up to its character some. Through sweeping corners, the Macan feels planted and exhibits little to no body lean. Its steering response is sharp and precise, and the GTS’s brakes deliver consistent performance. If we drove this machine in an area that regularly required heavier brake use, however, we’d opt for more durable and better performing (but expensive) $8,160 PCCBs.

Unlike other GTS models, the Macan gets the Sport Chrono Package as a $1,310 option rather than being standard. For that amount, you get an analog and digital stopwatch on the top of the dash, Sport Plus mode, a performance display on the Porsche Communication Management (PCM) system, and Launch Control. The sum you pay for these extras is reasonable, but we want them to be standard in the facelifted or second-generation Macan.

Alternating between freeway and backroads as we trek east towards Lake Tahoe, snow flurries and showers from the sky as the elevation increases. Here the Macan inspires more confidence. While we do indeed back down our pace on the slicker roads, at no point do we feel a lack of grip or composure. This can, of course, be chalked up to the snow tires and all-wheel-drive system. 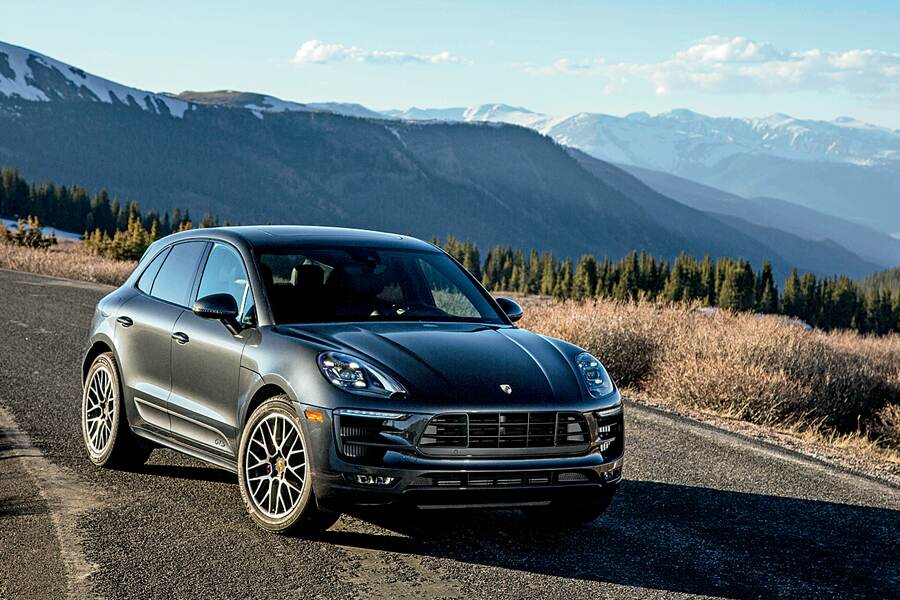 As we near our destination on the Sierra Nevada Mountains, we think about this GTS’s final extra: the $3,390 Premium Plus package, which features a Bose stereo, auto-dim mirrors, heated front and rear seats, a panoramic moonroof and Porsche Entry & Drive. The 14-speaker Bose system emits clear and pleasant sound, and the clever mirrors, warm seats, and expansive glass roof are nice to have. The ease of keyless and engine starting with Entry & Drive is appreciated. For the money, this is an options bundle worth selecting.

The Macan GTS is ultimately a polarizing machine. On the one hand, it is a competent and comfortable SUV that leads its class in nearly every performance category. In fact, only the $56,250 362-hp Mercedes-Benz AMG GLC 43 bests the GTS in 0-60 acceleration (4.8 sec. vs. 5.0 sec.) and power-to-weight (11.45 lbs/hp vs. 11.6 lbs/hp). On the other hand, the GTS feels too heavy and underpowered relative to other contemporary performance machines to be truly exciting.

In the future, we’d like the Macan GTS to be lighter, more powerful, and made with a front/rear weight distribution that is conducive to more neutral handling; think 400 hp, 3,700 lbs, and 52 percent of the vehicle weight over the front wheels. But we’re confident Porsche will make its bestseller even more appealing to sports car fans while also satisfying more general interest buyers going forward. 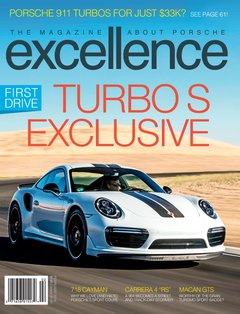