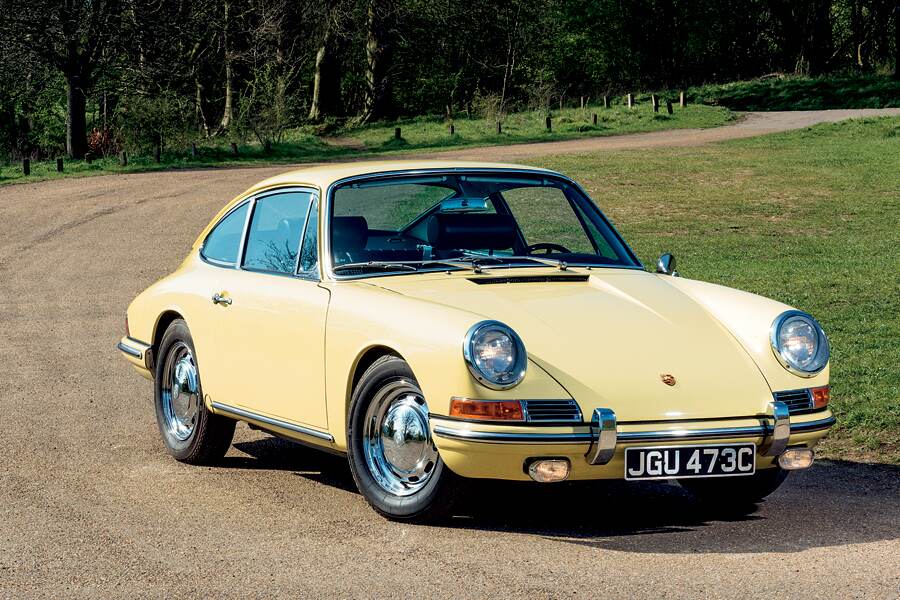 Turning up a top-flight early 911 these days is becoming more challenging than in years past. Vic Cohen—one of England’s best-known Porsche collectors—has owned and enjoyed many 356s and 911s through the years. When the retired import/export executive and his son started looking for a solid early short-wheelbase 911 coupe, he didn’t know that the car he’d eventually purchase had begun its life in the ownership of a professional American football star and almost ended its existence in a scrap pile.

A gifted athlete named Don Paul found himself in the NFL after a brilliant career at UCLA. A good job playing pro football meant having enough money to launch his own business, and having enough discretionary income to buy a Porsche. But the Fresno, California, native came from humble stock. His immigrant parents became successful farmers in California’s Central Valley. Paul’s nephew, Steve Palmieri, tells us that during the Great Depression young Don helped haul fresh produce down to Los Angeles in a horse-drawn wagon. His family later moved to the Southland, where Don went to high school and became a star athlete.

Offered a football scholarship by UCLA, Don enrolled in classes at age 17. But just a few months later, the U.S. entered World War II, and Don enlisted, lying about his age. Eventually, the Navy figured out that he was too young to be fighting and sent him home. In 1943, at age 19, he was back at UCLA. He was big enough, strong enough, and quick enough to earn a starting assignment with the Bruins, and thanks to his maturity became the first freshman ever named a team captain. During the 1946 season, Paul and his Bruins rolled up ten straight victories and went to the Rose Bowl where they lost to Illinois. 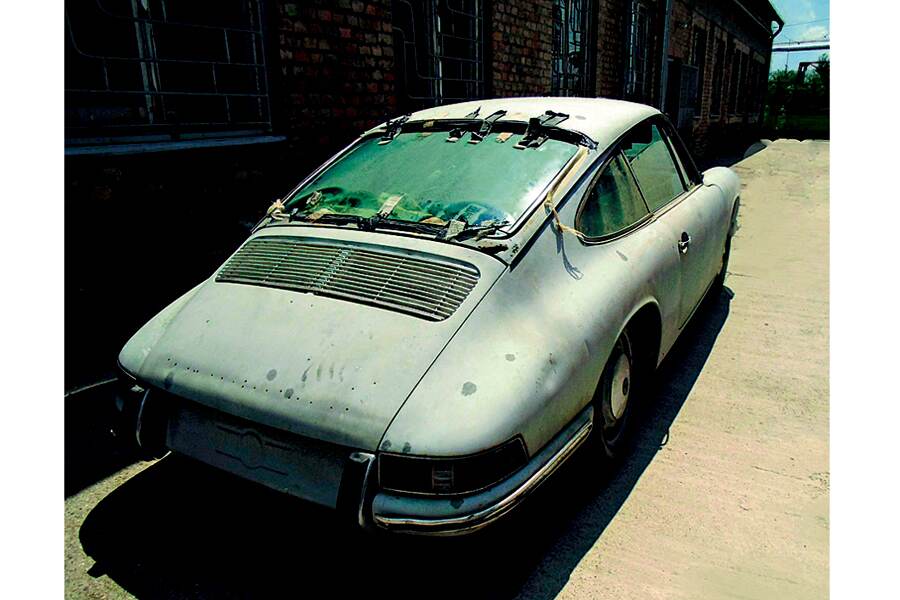 In 1947, following graduation, Don was drafted by the Cleveland, later Los Angeles, Rams, where he played for eight seasons, building an image as a ferocious middle linebacker. “At least I didn’t bite anyone’s ear off,” he once joked; one of his own ears had been chewed upon by a rival player during a particularly rough game. In 1951, Don led the Rams to the NFL championship. After his active playing days ended, he served as a defensive coach for the Rams, after which he became a television sportscaster on CBS. His obituary also notes that Paul was named to the UCLA Athletic Hall of Fame in 1986.

By today’s standards, professional football players of that era didn’t earn a great deal of money. In a 1986 interview with Los Angeles Times sportswriter Jim Murray, Paul recalled what today we would consider a very modest paycheck: “I got $6,000 a year most of the time. I think I worked all the way up to $10,000.” Still, for that era, it was enough to allow Paul to enjoy a comfortable lifestyle; he and roommate Bob Waterfield—who would later marry Hollywood screen star Jane Russell—hung out at Hollywood night spots, where Don picked up a taste for good food.

Don also had developed an entrepreneurial spirit that would keep him in good stead after his retirement from football, opening what today we refer to as a “food court” in the San Fernando Valley, and then a very popular and successful restaurant called The Ram’s Horn. By then he was married and starting to raise a family. He was also doing well financially, so it was time, he decided, to buy a new toy. Competition Motors was close by, and Don soon was enjoying his new 1965 Porsche 911. 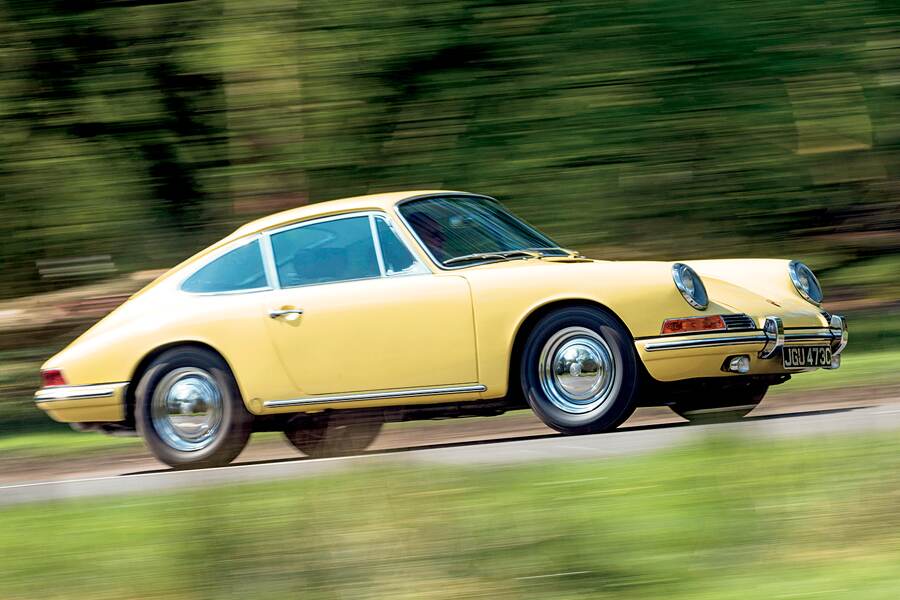 Back Across the Pond

We’re not quite certain how long Don kept this 911 or if he purchased another one later on. Family members say Don would hang onto new automobiles for three or four years. Assuming that he sold or traded this car before 1970, it likely passed through several owners, but it dropped out of sight until eventually winding up at a repair shop in northern California. It appears that the car quietly sat, collected dust, and over time became a donor car for the many small parts that could be easily removed. Finally, the car was offered for sale and wound up in Sweden around 2010.

The new owner commissioned a full restoration by Zoltán Hímer at Porsche specialist Mashmotor Ltd. in Budapest, Hungary. Work began in the summer of 2013, consuming 22 months of effort, with each step being carefully documented. Hímer describes the car as being in average condition for its age, and after the shell was stripped to bare metal, it was found to be almost entirely original, retaining the last three digits of the chassis number scrawled in the headlamp buckets and inside the engine lid. The entire six-digit number was also stamped on the lower dash panel, something that was not found on 901s.

Some minor surface rust was evident, but there were no signs of accident damage. The original Type 901/01 engine had been replaced early in the car’s life with an un-numbered motor whose case was stamped 9-65. The installation is not mentioned on the Kardex, suggesting it may have been exchanged after the warranty had expired. Another change from stock had been the installation of a pair of Weber triple-throat carburetors, replacing the original Solex 40 PI overflow-style carbs. Porsche made Webers standard after February 1966. 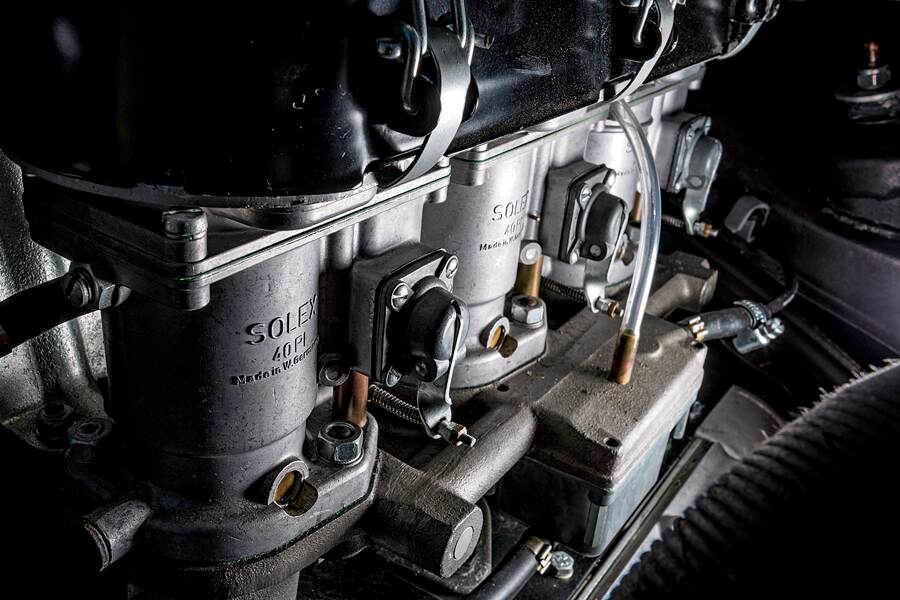 Mashmotor overhauled the engine and installed a set of Solexes and their requisite scavenge pumps. The transaxle was also refurbished, and the brakes, suspension, and instruments were rebuilt. A complete new factory-correct interior with six-pleated seat covers was purchased from a Porsche Classic-authorized supplier. A new dash pad and cover were also secured, along with new, correctly-pleated door pockets. The radio was restored, and a new speaker was installed. Then, all the chrome was replated, and the alloy trim was polished.

Almost all of the car’s original badging was missing, so it was replaced with new OEM or reproduction parts. Mashmotor provided a correct spare steel wheel and tire, jack, tool roll, and owner’s manual. When all the work was complete, the odometer was reset to zero.

The Swedish owner put the 911 on the market, selling it to a used sports car business in Malmö, and soon afterward, it came to Cohen’s attention when it appeared for sale on the website mobile.de, which is described as “Germany’s largest online vehicle marketplace.” Cohen spotted the ad and dug deeper, contacting the sellers and viewing the “book” Mashmotor had compiled of the restoration. The next step was finding someone to examine the car first-hand. 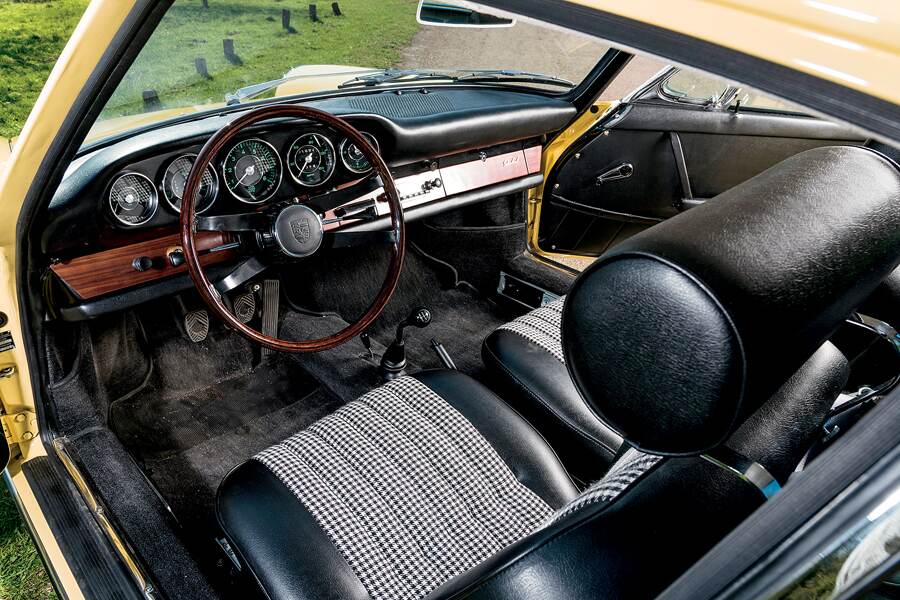 Through his contacts in Britain’s Porsche community, he was put in touch with Tony Anderson, described as a trustworthy local expert. It was critical, says Cohen, to have someone there with a trailer to take it away immediately when the deal was closed. After a few more phone calls and a video conference, the sale was arranged, and the car was removed to Anderson’s shop to await shipment to England. Soon after, the 911 was shipped to the UK.

Upon taking 911 S/N 300828 under his wing, Cohen found it to be in very good condition, but not as perfect as he wished it to be. He began to address tiny details to make the car as correct as possible from a physical aspect, such as sourcing some OEM “K”-marked bolts that secure the front fenders to the tub along with chasing down correct early rubber door grommets marked with concentric circles, rather than the later, smooth-faced bits. At the same time, Cohen began documenting the car’s history.

Cohen’s first task was obtaining a copy of the Kardex warranty document, which described his car as having been completed on April 13, 1965, painted in 6405 Champagne Yellow, one of seven standard colors. The interior was black, and the seat covers had black-and-white “Pipita,” or “Houndstooth” inserts. It was fitted with engine number 900928, a Type 901 five-speed gearbox, and extra-cost options including a set of 165/15 Dunlop tires, a Blaupunkt Frankfurt radio, and an antenna and speaker package. It also has Catacolor tinted glass all around. 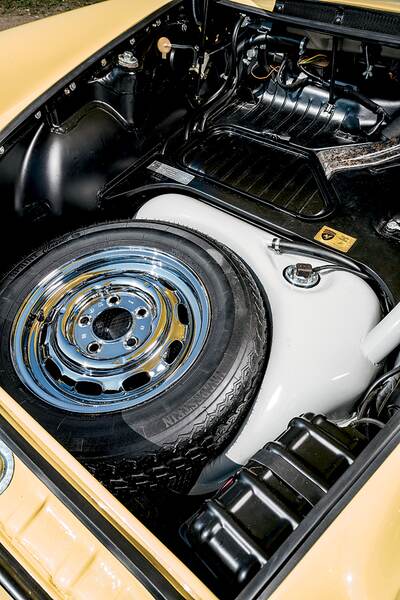 The Kardex also showed that the little 911 was delivered to the United States, and eventually reached Competition Motors, Johnny von Neumann’s Volkswagen and Porsche distributorship. Upon its purchase, the name “Don Paul” of Woodland Hills, California was entered as the original owner.

Cohen also learned that Mr. Paul had the car serviced regularly at the dealer, with the last hand-written entry dated January 21, 1967, by which time the car had covered 27,642 miles. Sometime before the next service, the car changed hands, and other than the addition of a gas heater, chromed steel wheels with hubcaps, and a pair of fog lights, there are no records as to what happened to it over the next 30-plus years.

Your author had established contact with Cohen in 2016 regarding another Porsche he had once owned, and we began a regular e-mail correspondence. Vic was trying to learn more about the Champagne coupe’s first American owner, and I offered to assist. By that point, he had written to the occupant of the address listed on the Kardex, and soon afterward, I too contacted that addressee. 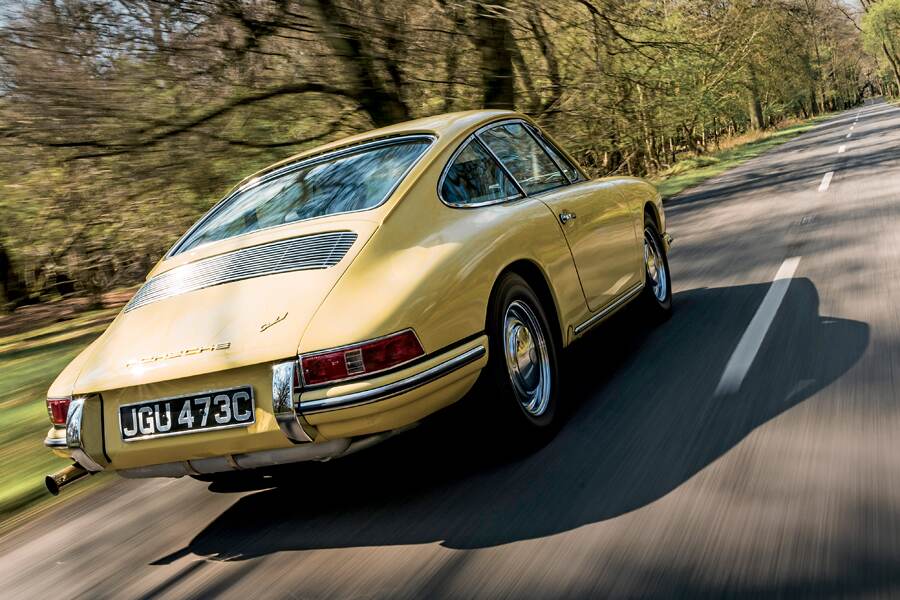 Don had resided at that address for more than 50 years, but now he was gone; having passed away in 2014 at age 89. The next step was to obtain his obituary from Los Angeles newspapers, which not only revealed his extraordinary football career but also led me to surviving family members who were happy to share memories of their famous relative.

As received from Sweden, Cohen’s coupe lacked the early 911’s over-steering fix—a pair of iron weights in the front bumper—and he soon noticed the handling issue when giving the car the whip on country roads. After putting out the word through England’s Porsche enthusiast community, he located a set and installed them along with some correct track rods. Following a careful factory alignment, he promptly noted the change in road behavior. “Road-holding really dramatically improved, straight line good up to 90 mph now!”

The third part of the factory fix was a switch from a single 45-ampere-hour battery mounted low in the front trunks of the earliest cars to a pair of batteries mounted in the front trunk, one beneath each headlight. Vic’s car retains a single battery beneath a plastic cover held down by a rubber strap. He says he’s going to keep the chromed wheels along with those factory Hella clear fog lights.

“The fog lamps are period correct,” he says; and frankly, the more light, the better!” A pair of cylindrical headrests were installed at Mashmotor, says Hímer, at the Swedish owner’s request. Although the Eberspacher gas heater has been rebuilt, Cohen decided to leave it disconnected. Also worthy of note is the correct coconut-fiber mat that’s located below the trunk floor carpet.

As this world-famous automotive design approaches its 55th year, many old 911s have sadly slipped away from us. Years ago, they were often viewed as old and used up rust traps, tossed aside and forgotten or gutted and turned into race cars. Today we have come to realize their importance in the telling of the marque’s history, and it is always a pleasure to find another one that has been rescued and returned to original form, no matter which side of “the pond” it resides. 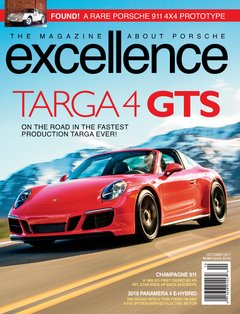