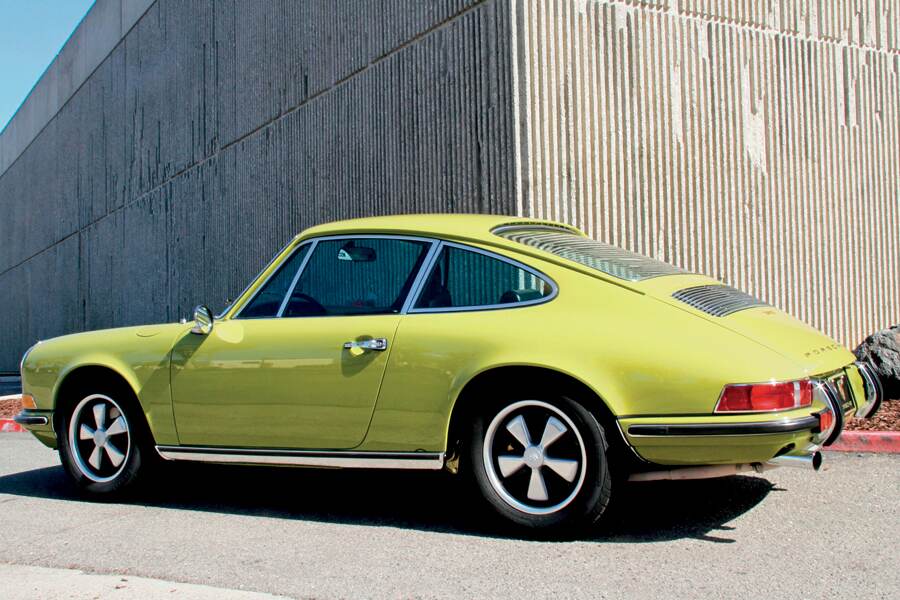 1969 was a landmark year in which Porsche’s Ferdinand Piëch—at great expense and risk to the company—jumped into the metaphoric deep end of the pool and debuted the advanced 917 race car. It would also be the year Porsche would offer its lightest and what many consider its most potent production 911 to that point: the “B”-series 911S, which many enthusiasts today consider a taste of perfection. This now iconic model combined the first-generation 911’s brilliant 2.0-liter flat-six air-cooled engine with a new extended wheelbase chassis and a wonderfully responsive mechanical fuel injection system.

Gateway to the RS

Like an eye-dazzling laser strobe at a rock concert, Jeff Lewis’s Golden Green 1969 911S coupe cannot be ignored. There are very few early 911s that draw the eye like this one, especially when grouped with other Porsches, nearly all of which are painted in much more muted hues. Lewis, an avid Porsche collector and vintage racer from Newport Beach, California, is convinced that the 1969 911S is “the most important stepping stone” from the first (1964-1965) 911 to the famed 2.7 Carrera RS of 1973 and the brilliant series of sports cars that followed. 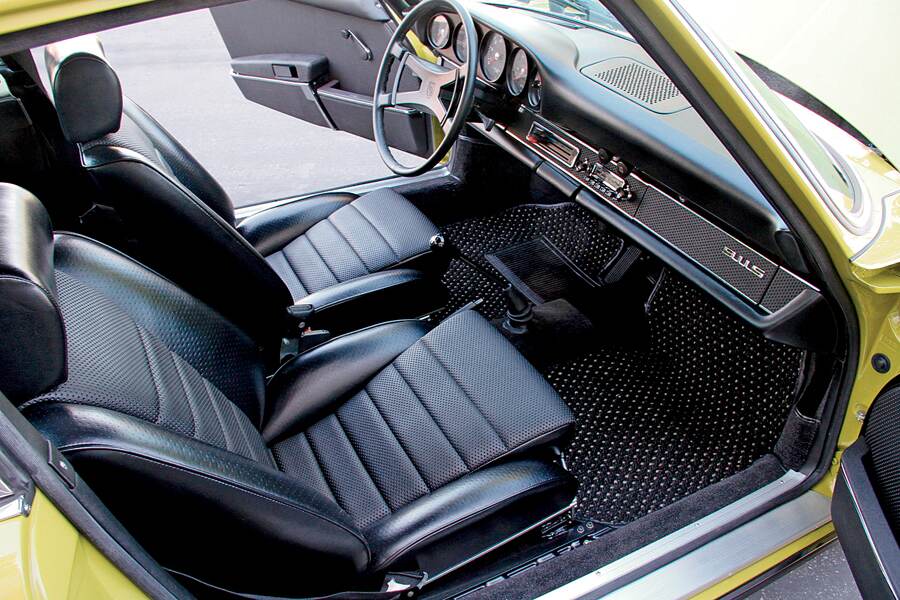 Lewis relates that serial number 119300621 came into his hands in 2013. He already had owned a beautiful Euro-spec Blutorange (Blood Orange) 1968 911S (Excellence #208, April 2013) and was not in the market for another “long-hood” car when he came across the example on these pages. Early 911 specialist Henk Barrs at Carparc USA in nearby Costa Mesa had just acquired the car from its second owner via an eBay sale.

Barrs then quickly sold it to Lewis, who had Barrs restore the car over a 12-month period. Lewis had previously purchased a Dolphin Gray 1965 911 from Barrs and had it restored; he was pleased with that experience. This 911S was, he says, a fully numbers-matching example with very little rust. Add the very rare and appealing original color and what he says were the important technical advances of the 1969 model versus the year-older design, and he couldn’t pass it up.

Fortunately, the car retained some of its original documentation. Its “Maintenance Record for USA and Canada” booklet shows the car was shipped to Bob Smith Volkswagen-Porsche in Hollywood, California and delivered on March 15, 1969, through the dealership’s leasing arm, Sierra Leasing, showing just 10 miles on its odometer. A number of service invoices also came with the car, including one to a Mr. Thomas Leich of Hollywood for a new set of tires dated November 15, 1971. The mileage was entered as 31,880 miles, suggesting that Mr. Leich might have been the original owner. 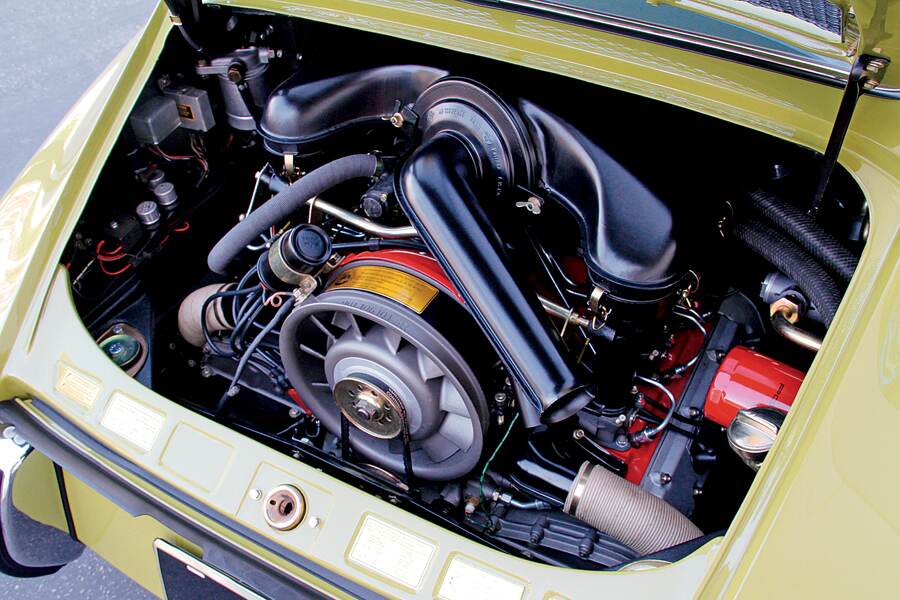 It appears that the second owner was a resident of Victorville, northeast of Los Angeles. That was the good news, says Lewis; having spent most of its life in the hot and dry desert, the car had “very little rust to remove when it was restored, and showed no sign of collision damage.” The bad news is that one of the previous owners attempted to convert the coupe into an RSR look-alike, cutting up the fenders and rear quarters and installing wide flares, a new fiberglass front valance, and of course, a tea-tray rear spoiler. That was a popular look in the 1970s, says Lewis.

Eventually, however, the car was placed into storage, and there it remained for some 20 years. Its accrued mileage was believed to be something less than 100,000. “The engine was said to be running, but we didn’t want to take the chance of operating it,” says Lewis. What also intrigued them was the car’s original color.

“We knew the car was originally Golden Green because there was plenty of it left on the inside of the door panels and in other areas that had not been repainted over the years,” explains Lewis. “It seems to me that the aluminum tag on the front side of the driver’s door jamb gave us the Golden Green paint code (6828), as well. I can even remember the original paint being visible on the rocker panels where previous colors had been ‘sandblasted’ away by road grit.” Returning the rear quarters to original turned out to be the single most challenging aspect of the restoration. 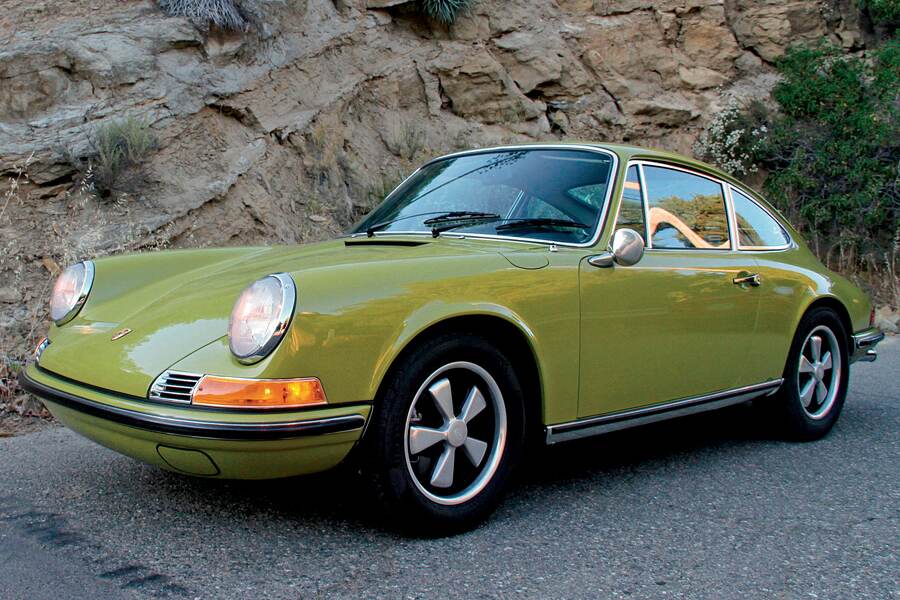 Barrs’s crew patiently reconstructed the quarter panels to their original shape, and a pair of new old stock (NOS) front fenders were ordered from Porsche. Fortunately, the original doors, deck lid, and front hood had remained with the car. After metal prep, the car was repainted and reassembled in Barrs’s shop, including the installation of a new interior supplied by Autos International. The drivetrain was rebuilt in-house. All the gauges were refurbished by Palo Alto speedometer. Small parts that needed replacement came either from Porsche or Stoddard.

How’d He Get That Color? 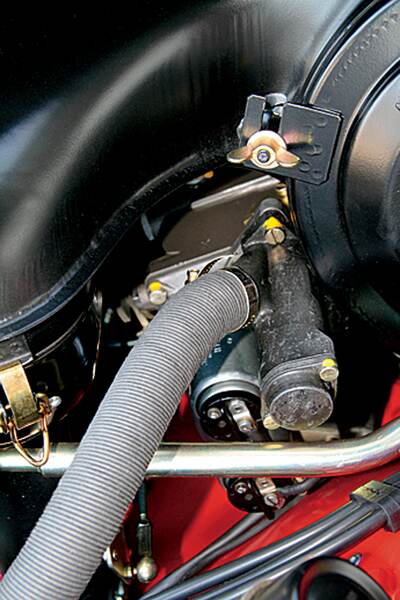 completed on January 14, 1969, and shipped to the U.S. Fitted with engine number 63390904 and transmission number 7193664, its options included Michelin tires, tinted glass and a Blaupunkt Frankfurt stereo radio and antenna/speaker package.

Lewis’s COA refers to “Special Paint According to Special Color Book,” and that sent us scrambling for more information. Helpfully, 1969 911S enthusiast Bryce Harvey of Atlanta, Georgia, shared his copy of the factory’s 1969 “Factory-installed Accessories” brochure, publication number POAC-ACC 1, carrying an original publication date of October 1, 1968, and revised January 1, 1969. On page 11, under section 9368, the following verbiage appears: “Special Paints: (6821 through 6838; 6853 and 6854 according to special color book).” 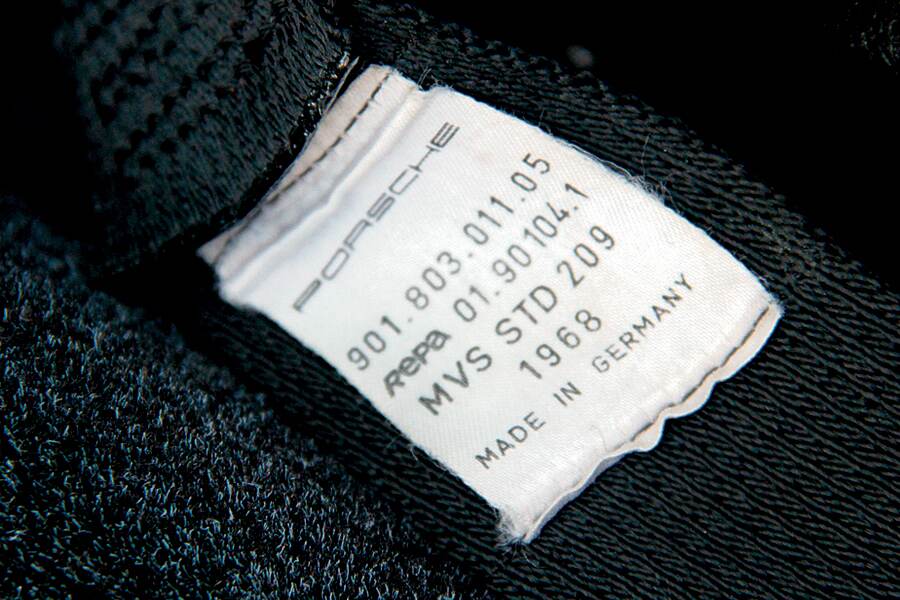 6828 happily fits in that listing, so the first owner paid an extra $154.00 to arrange a special appointment for his car in the Reutter spray-booth. By the way, section 9369 of that option brochure says Silver Metallic 6851 “and special colors outside special color book (6861). This includes standard colors of previous years such as 6003” could be ordered through the originating dealer for an extra $226.00 retail.

Harvey says he’s aware of perhaps six or seven other surviving 1969s in this color, including 912s, Ts, Es, and Ss, and perhaps only two or three 1969 911Ss. “There is a well-known very original garage-find 1969 911E Sportomatic in Golden Green and one or two other S coupes accounted for… I’m sure they made more but the survival rate and owners willing to post detailed information limit visibility into actual production numbers.”

Although it wasn’t quite finished, Lewis’s car was rushed north in time for the 2015 Carmel Concours on the Avenue, an increasingly popular part of Monterey Car Week, and as I wandered Ocean Avenue my eyes were drawn to Lewis’s car like hungry hummingbirds to a hanging feeder full of nectar. 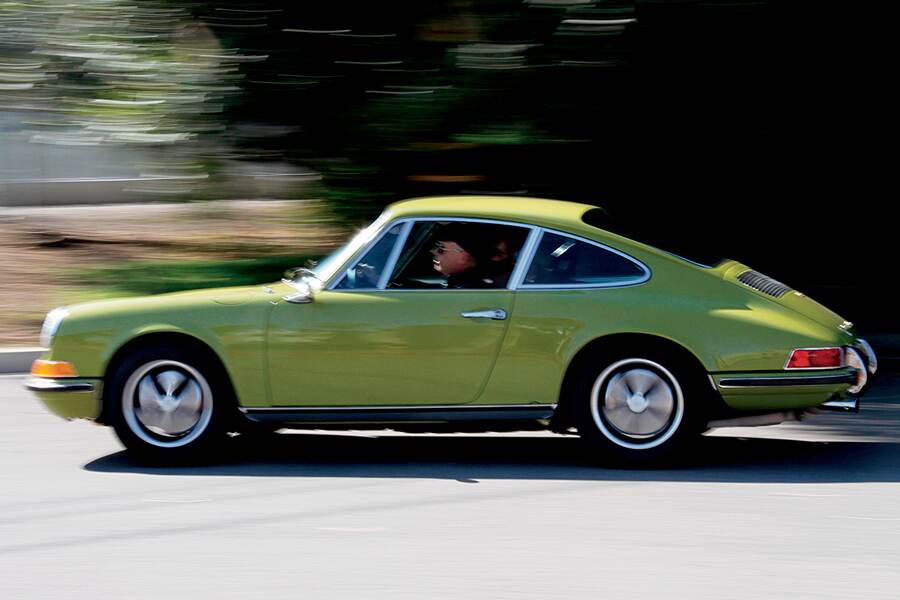 Lewis was still looking for a set of Fuchs alloys of the correct width and offset. A few days later, though, Lewis displayed his “S” at the PCA Werks Reunion, where it won the lead sponsor’s “Favorite Car” award. Lewis has since tracked down a set of proper “heart-style” deep sixes that were refinished by Fuchs guru Harvey Weidman.

I think we can agree that the first owner not only had good taste in cars, but he also made the right decision to pay a little extra for such a unique color. It was money well spent. Today, Jeff Lewis can open his garage doors and behold one of the most attractive 911s in existence. Indeed, the 1969 911S is both classically beautiful and timelessly appealing. 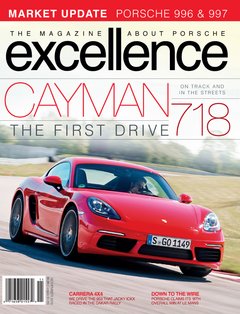