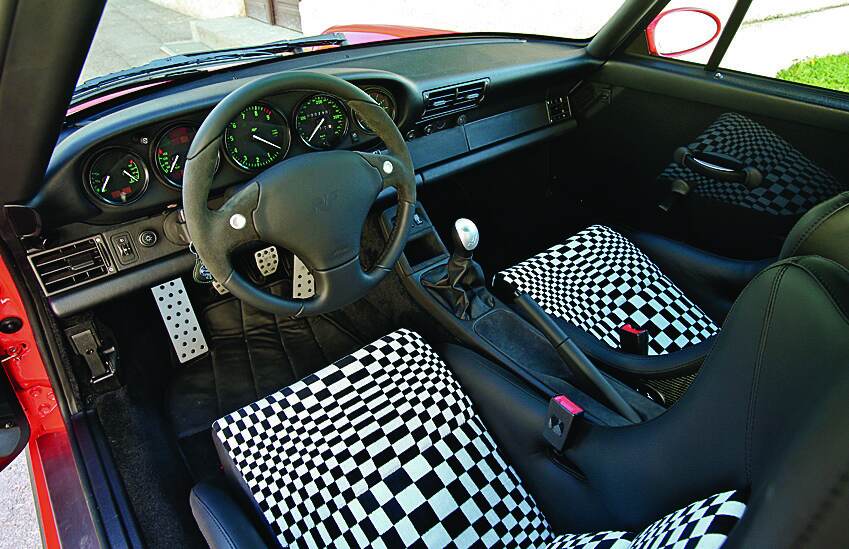 For many enthusiasts, the CTR Yellow Bird is the iconic image of a Ruf car. Thus, while Ruf’s model program for the current Porsche 991-generation 911 is very successful, there is still a very strong following for his creations based on the narrow-body 1974-1989 G-Series 911s, and the 1989-1994 964-gen 911s that followed. In recent years, persistent requests from the latter group of customers led Alois Ruf and his team to implement a development program to bring quarter-of-a-century-old 911s bang up to date in terms of performance and technology. The result is the Ruf Ultimate and the Ruf SCR 4.2, which made their debut at the Geneva Motor Show this year.

“I wanted to take the CTR concept to the next level using contemporary technologies in its engine, chassis and, most significantly, its bodywork,” Alois Ruf explained. The base car is a 964 with its MacPherson strut front suspension and semi-trailing independent rear bolstered with Ruf springs, dampers, and anti-roll bars. The car’s entire outer skin is made from carbon fiber, the torsional rigidity of this structure further stiffened by the Ruf Integrated Roll Cage (IRC). Together with other weight saving measures, the Ultimate is 220 lbs lighter than the car it’s based on was when it first left the Porsche factory. 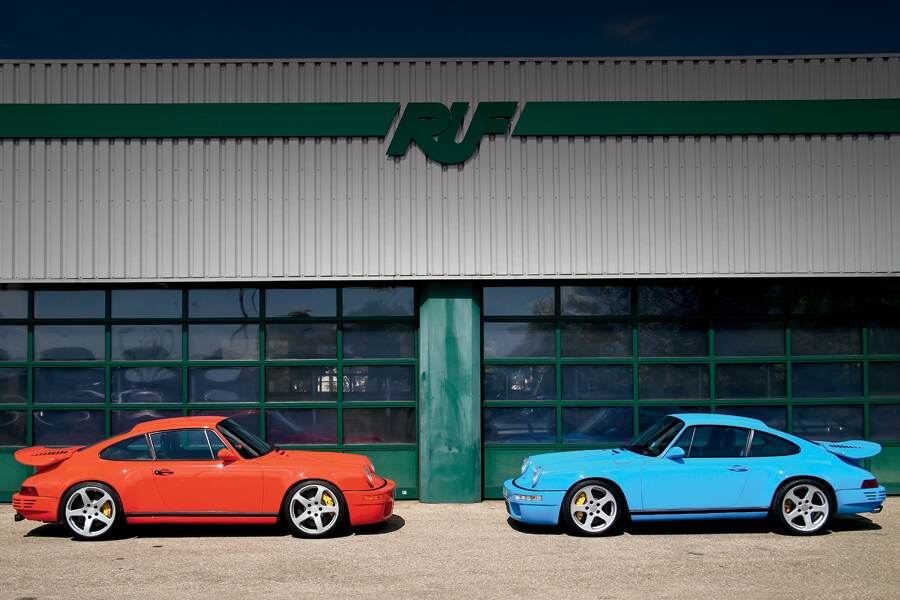 Back in 1988, the CTR Yellow Bird boasted a conservative 476 hp, and Alois admits today that his production cars all had closer to 500 hp, with the best ones showing as much as 510 hp on the dyno.

The Ultimate is powered by the classic Mezger-block, air-cooled, twin-turbo engine as well, but the later 3.6-liter version with the appropriate Ruf modifications. This engine is rated at 590 hp at 6,800 rpm, 531 lb-ft of torque at 4,500 rpm, and drives the rear wheels, or optionally all four wheels, through a six-speed manual transmission.

In a car weighing just 2,679 lbs, this makes for a power-to-weight ratio of just 4.5 lbs/hp and quite spectacular performance, with a top speed of 212 mph. Acceleration is equally impressive, with the all-wheel-drive variant capable of a sub-3.0 second 0-62 mph sprint. 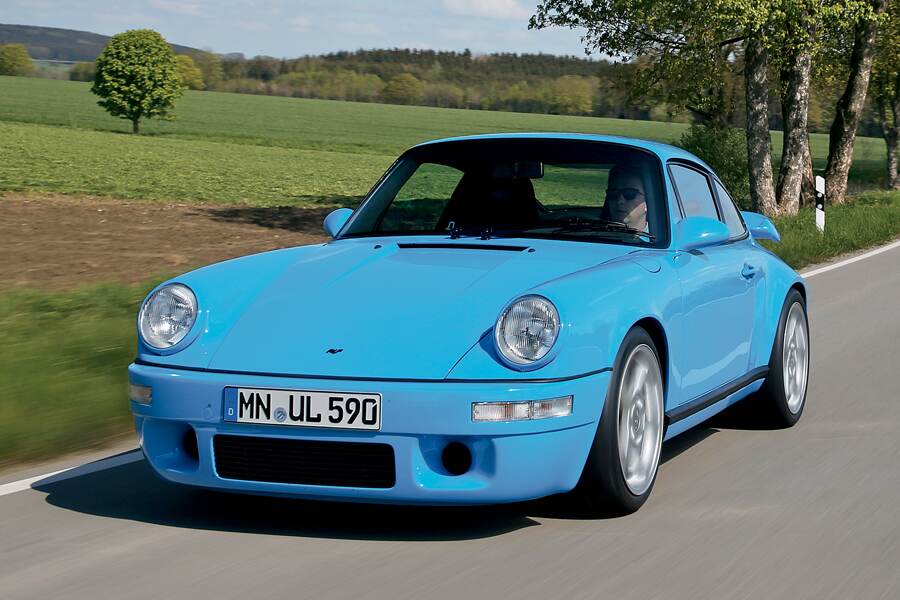 At a glance, the Ultimate is a dead ringer for the original CTR, even down to details like the air vents in its rear bumper. But where the revered original had orange U.S.-spec front indicator lights, the new car has clear ones. And the Carrera 3.2 fog-lights in its front bumper have been replaced by brake cooling ducts.

What I love about the 911s from this period and before is their compact size. This allows you to place the car more easily on narrow roads, where the latest cars share a width problem with the Turbo models from the ’80s. However, where the earlier torsion bar suspension is really on the limit with big horsepower, the newer coil-sprung underpinnings of the Ultimate lap it all up, even in rear-wheel-drive form. 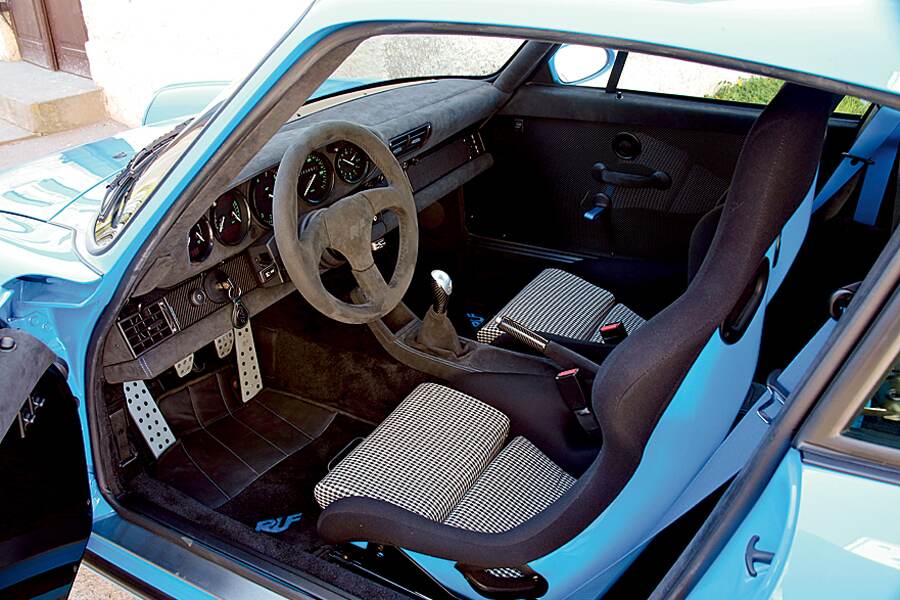 More than that, the modern twin-turbo technology coupled to fully mapped Motronic fueling, spark and boost control is so devoid of turbo lag that this near 600 hp monster of an engine can be trickled along in a high gear at relatively low speeds without problems. Say 1,200 rpm in third at suburban speeds, and then a moderate throttle input to get you moving rapidly before really going into the loud pedal from 2,500 rpm for the real action. From there on in, the fat torque curve delivers the goods in spades, but so progressively and smoothly that there is no shock to the system.

You feel a massive and consistent push in the back until you have to snatch the next gear as the rev counter needle surges to 7,000 rpm. The over-riding impressions, if you can even breathe and think, are the sheer thrust in each gear ratio, the world accelerating past your windows at warp speed, and the sense that the engine’s internals feel lighter than a stock 911 Turbo, which indeed they are. The turbocharged flat-six engine’s lust for revs and the subjective low inertia of its reciprocating parts tell you in a microsecond that this is a very special engine, hand-built with loving care to deliver serious power and torque.

The chassis feels totally in tune with the engine, and the car feels solid and well pinned down on the road. The counterpoint is that this light car is more pointy and eager to change direction, diving into corners more keenly than a steel bodied 911, yet with the feeling that you can trust it’s handling and grip. In short, this very fast machine inspires driver confidence. 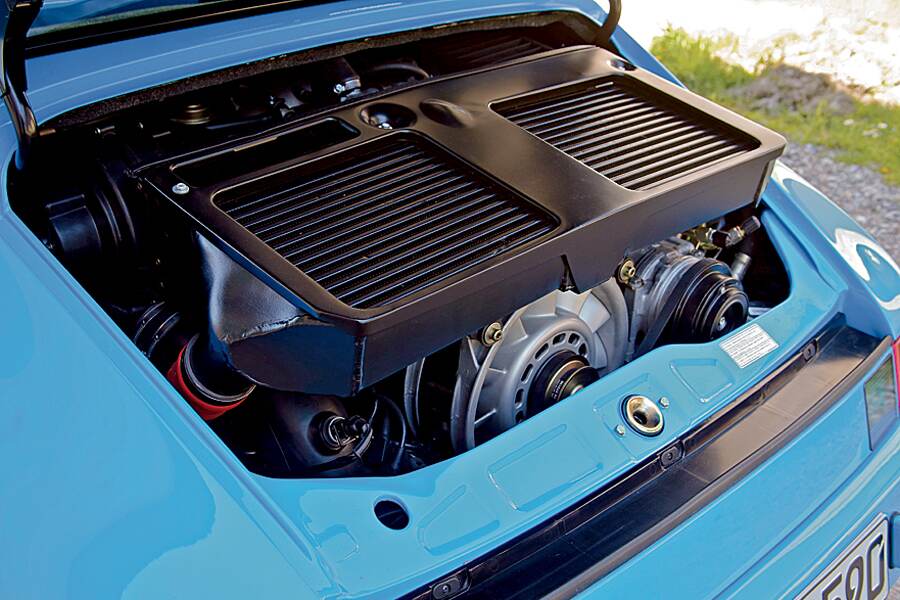 I have driven the original Ruf CTR Yellow Bird a number of times, and it is a very visceral experience that always puts a big smile on my face. But its early Motronic engine management is not the best thing since sliced bread, so it is a fun car that I would not care to drive every day.

The Ruf Ultimate, however, takes the best aspects of the CTR, like its low weight and raw speed and wraps them in a look-a-like package that is better designed and finished and more modern and civilized all around. This is a car with no foibles in particular that goes even harder than its illustrious ancestor, yet is as easy to live with as a factory stock 1996-1997 993-gen 911 Turbo. As the best car possible based on a 964 chassis, the Ultimate is what it says on the label. 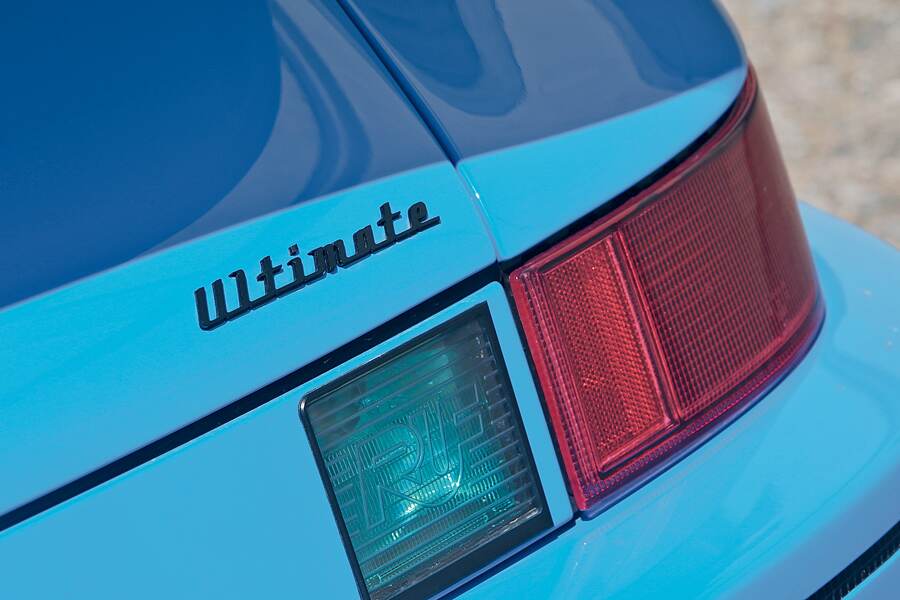 The initials SCR were affixed to the first ever Ruf 911 conversion back in 1978. That was the year that Porsche launched their 911 SC, whose 3.0-liter flat-six engine made 180 hp with a relatively low 8.5:1 compression ratio. This was 20 hp down on the 1976-1977 Carrera 3.0 that went before. In 1981, Porsche increased the compression ratio to 9.8:1, along with some other modifications, which gave a useful increase to 204 hp. However, within a year of the first 911 SC release, Ruf had created a power upgrade kit aimed at bringing the 911 SC back up to at least Carrera 3.0 output levels.

While the arrival of the Turbo 3.3 in 1978 meant that a longer throw crankshaft and larger diameter pistons were available, Ruf required high compression pistons and, to make the conversion relatively affordable, left the crankshaft alone. With Mahle making the right 98-mm barrels and pistons, Ruf’s conversion took displacement to 3.2 liters, and the 220 hp Ruf SCR was born, with 50 such conversions sold between 1978 and 1983.

However, even back then most of Ruf’s customers realized that the most bang for their buck was to be had from a forced induction engine, and so the turbocharged flat six quickly became Ruf’s signature engine. 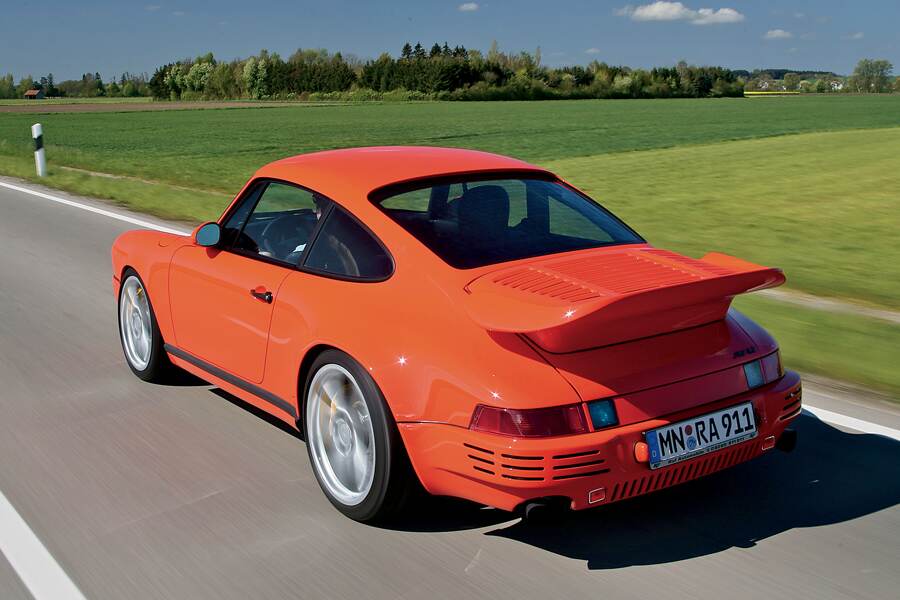 Fast-forward to Geneva 2016, and Ruf reignited the SCR name, but this time with a 4.2 after it signifying their bespoke 4.2-liter Mezger-based engine installed in a 964-look 993-based bodyshell. This is not the first outing for the 4.2-liter naturally aspirated flat-six Ruf engine, which made its debut the year before in the RGT 4.2, whose big arch flares and prominent rear wing give it the appearance of a race car sans sponsor decals.

With 525 hp at a screaming 8,370 rpm and 369 lb-ft of torque at 5,820 rpm, this motor is the result of huge 105.1-mm pistons bolted to an 80.4-mm throw crankshaft for a swept capacity of 4,185 ccs. Compression ratio is 12.6:1, which is close to the edge for a car burning premium high-octane pump gas. However, the Bosch ME7.8 ECU that controls the engine parameters and the stock sensors are able to keep everything sweet.

The linchpin of this 964-look-a-like’s special bodyshell is Ruf’s in-house conversion that extends the wheelbase of the basic 993 shell by 70 mm (2.75 inches) for improved high-speed stability. The car now has the same wheelbase as a 997 Carrera within an unchanged overall length. 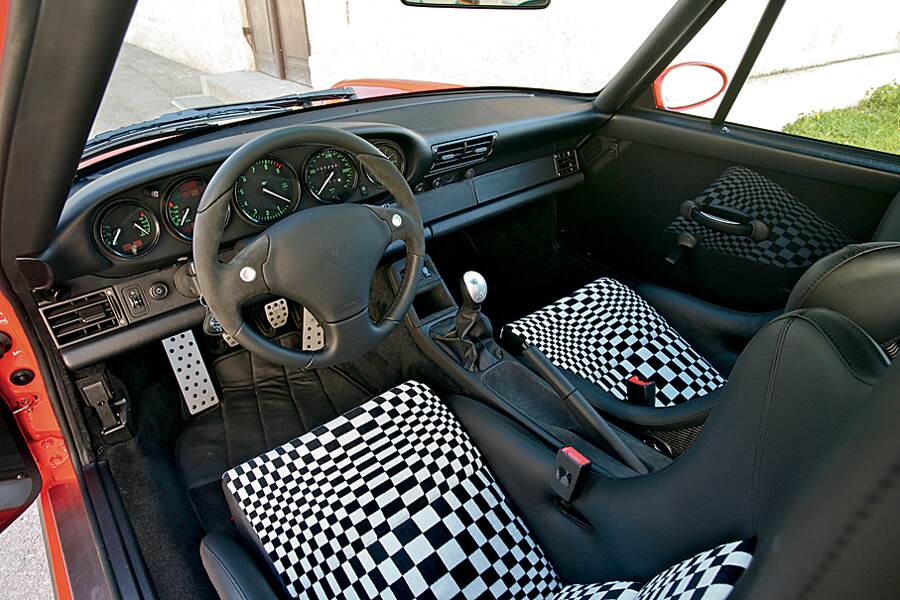 The process is not as straightforward as it sounds, and is far more than just a cut and shut job like your average stretched limousine. Here, two incisions were made in the 993 shell to achieve the 70 mm wheelbase extension. The first moves the front axle and wheel housings 20 mm (0.78 inch) forward, while the second moves the rear axle and wheel housings 50 mm (1.96 inch) further back. Because this prototype is steel bodied, the new rear wheel arches had to be fabricated by hand and took significant time and skill to get right.

The round cap at the rear of each sill on a G-Series 911 normally houses the jacking point. In this case, the caps are a visual foil to counter the question mark raised by the extra metal. Finally, the designs of the front and rear bumpers are unique to this car.

This Geneva Show car is a steel-bodied prototype, but the production cars will have carbon fiber body panels to reduce the curb weight to 2,624 lbs. Like the Ultimate and indeed the original CTR Yellow Bird, the SCR has no rain gutters, making it look smoother while also improving aerodynamics and reducing wind noise. It also features Ruf’s IRC for safety and extra stiffness. 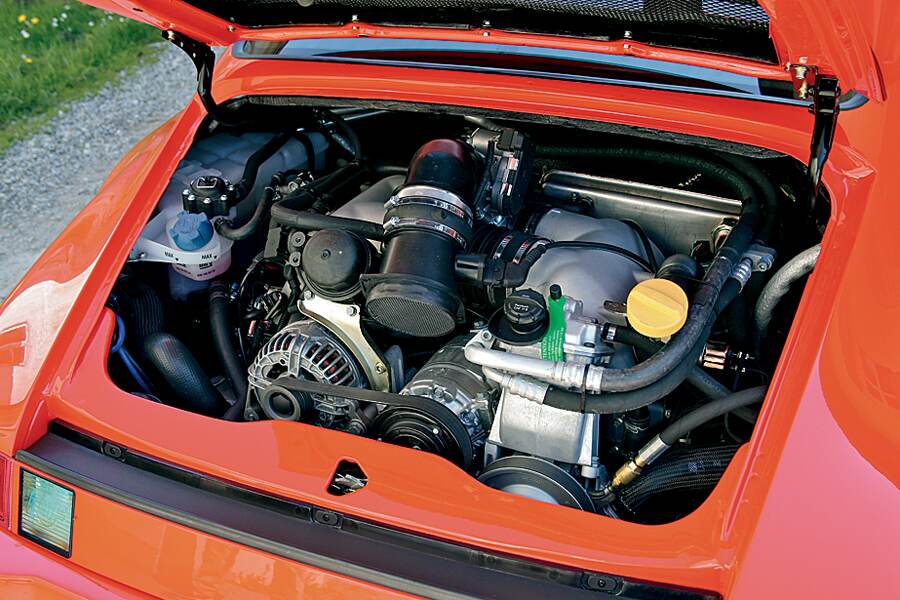 The front suspension is McPherson strut, and the back end is the multi-link system from the 993-generation car. The use of the 993-style rear end was the reason for using a 993 shell as the core of this project, but even so, the mounting points on the frame are modified, and some suspension components are bespoke Ruf parts, as are the springs, dampers, and anti-roll bars. To stop excessive lateral movement, the bushings are the uprated units from the 993 RS/GT2.

Character is a big issue with a Ruf car, and while the engine uses big pistons, they are lightweight forged items, and since the over-square dimensions tilt at a high-revving capability, that is how things turn out. The best way of describing this big motor is razor sharp and rev happy. It has torque everywhere, and its pickup is instant in the way of the best naturally aspirated engines. Using high revs comes naturally even though the beefy torque curve means you can drive everywhere one gear higher than you would in a GT3 RS 3.8. 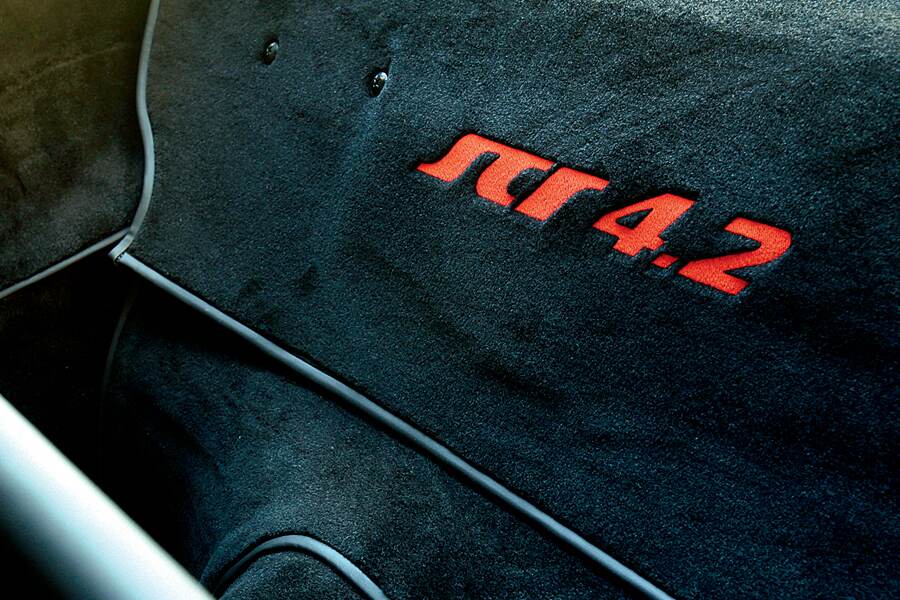 As advertised, the longer wheelbase and larger rear tires give the car an extra shot of stability both in a straight line and in the bends, and that means you can deploy the power with confidence on twisty roads. It also improves the ride quality, a good thing in itself.

These more compact, narrow body cars have just the right amount of modernity in their makeup, eschewing the fashion for backdating to the long-hood 1970s cars. Arguably, they have more feel and more character than the newer 911s, and some people simply prefer the looks of the G-Series and 964 models over those that went before or came after.

The other side of the coin is the technical aspect. Here, Ruf has re-engineered this pair using state-of-the-art materials like carbon fiber to lose weight from the shell, while getting far more power from the engines than he ever could in their heyday. Thus, efficiency is improved by a significant margin.

Alois Ruf has always been successful by going his own way and doing what he believes is right. And since there seems to be more than enough customers out there who like his ideas, and have the financial wherewithal to vote with their wallets, history also appears to be on his side. 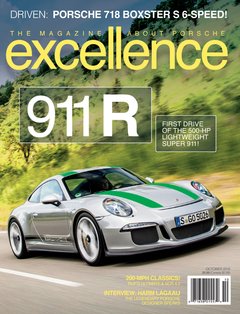