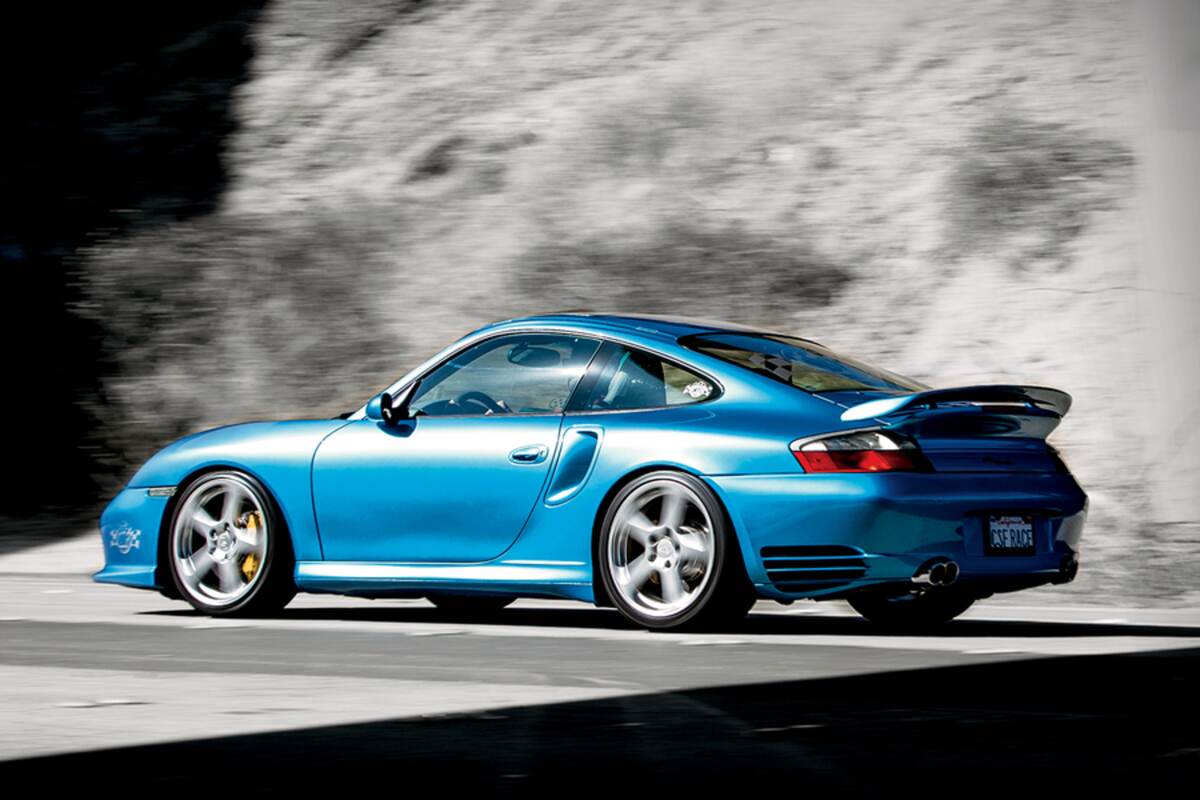 The words “Porsche” and “bargain” don’t commonly go together. Calling practically any used Porsche a bargain will normally raise questions of its condition or if it came with a salvage title. Say the words “Porsche 911 Turbo” and “bargain” together and you’ll get an even more skeptical reaction. How can a 911 Turbo, the very Porsche that regularly puts down supercar 0-60 mph times and top speeds, be had for relatively cheap prices? The answer is simple economics.

For the 2001-2005 996 generation 911, however, sales soared. Despite its six-figure price tag, a total of 22,062 996 Turbos were sold thanks to a generally robust economy. Since so many 996 Turbos were sold, the supply of them available is relatively high these days. The number of 996 Turbos (and 996s in general) available on the used market has created a buyer’s market. That’s why this generation of 911 Turbos can be had for as little as $30,000 these days. These prices have made owning a 911 Turbo accessible to more buyers. 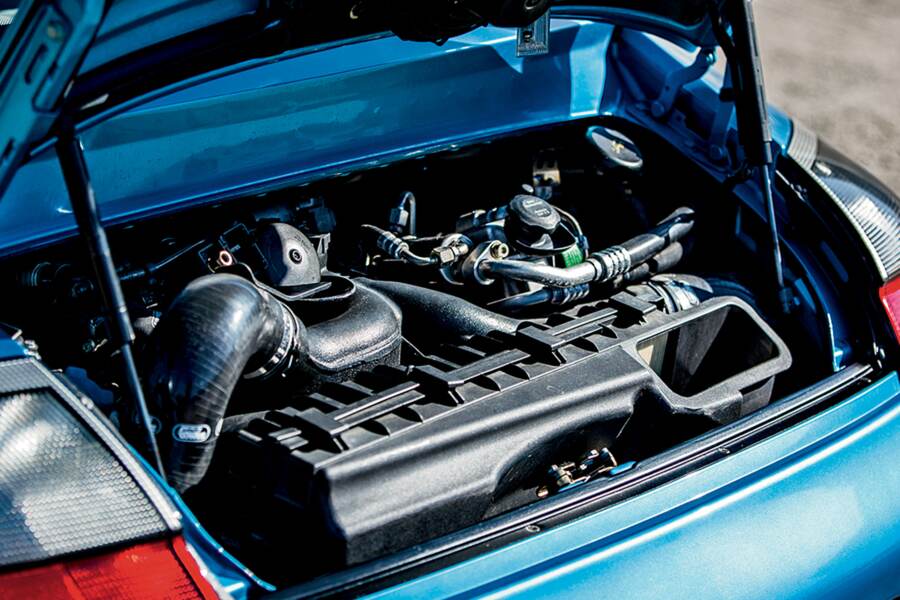 Too Many Cooks Who Get it Right

“I think the floor for 996 Turbo prices has been reached, and they will start to go back up as all the prime, low mileage examples have been bought up,” said our featured car’s owner, Ravi Dolwani of Newport Beach, California.

When he first set out to buy a 911 Turbo, Dolwani was torn between a boosted 996 or 997. After searching online for several months, Dolwani thought he found the perfect car: a very clean Basalt Black 996 Turbo with only 12,000 miles listed for just under $50,000. But the demand for such a low-mileage and well-priced car did not work in his favor. 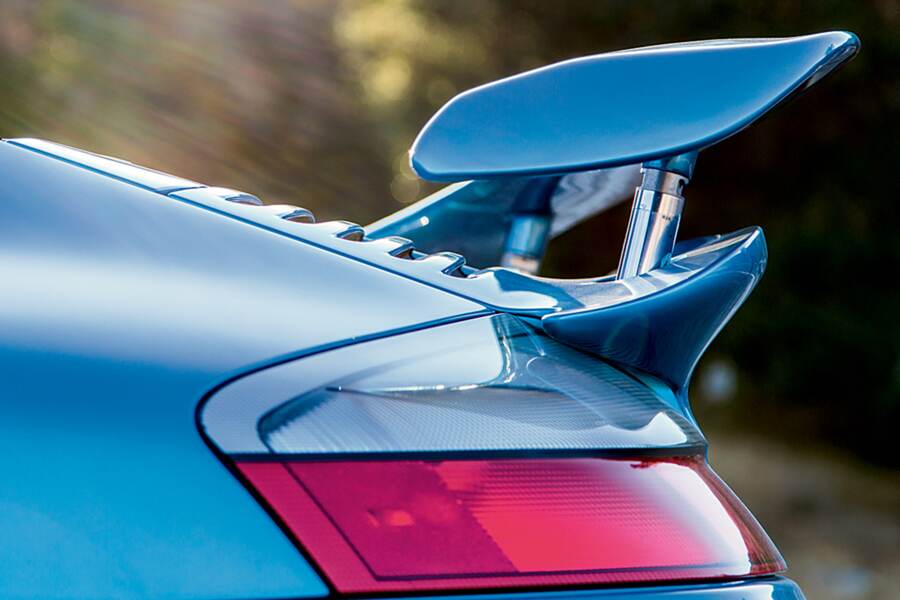 “While I was getting the keys for the test drive another potential buyer walked in and bought the car from right under me,” said Dolwani. When that deal didn’t work out, he continued to search for another car and found a listing for a heavily modified 996 Turbo on one of the Porsche forums. While tuned cars aren’t what every Porsche fan likes, a tweaked Turbo was just the sort of machine Dolwani envisioned himself driving on the backroads of Southern California.

“I was in the right place at the right time,” he explained. “I found the car online while on a business trip in Toronto. I was soon flying back to Los Angeles, and booked my return trip with the longest layover I could find in Chicago. Just enough time to leave and go check out the car.” It didn’t take long for him to make his decision. “The moment I saw the car in the garage,” he continued. “I was sold. The color, the sound of the car, the power, the fresh interior, the stance…this was the perfect car for me!” He negotiated with the owner, bought the car and had it shipped back to SoCal.

“One of the biggest reasons I bought this very modified car is because all the records, receipts and maintenance logs had been kept and passed on to me dating back to when the second owner bought the car with 5,000 miles on it,” explained Dolwani. “I think this is also an important fact when buying an older used car, let alone an expensive Porsche which has been modified. I knew exactly what I was buying, and how well it had been taken care of. It even had the original window sticker and some records from the first owner as well.” 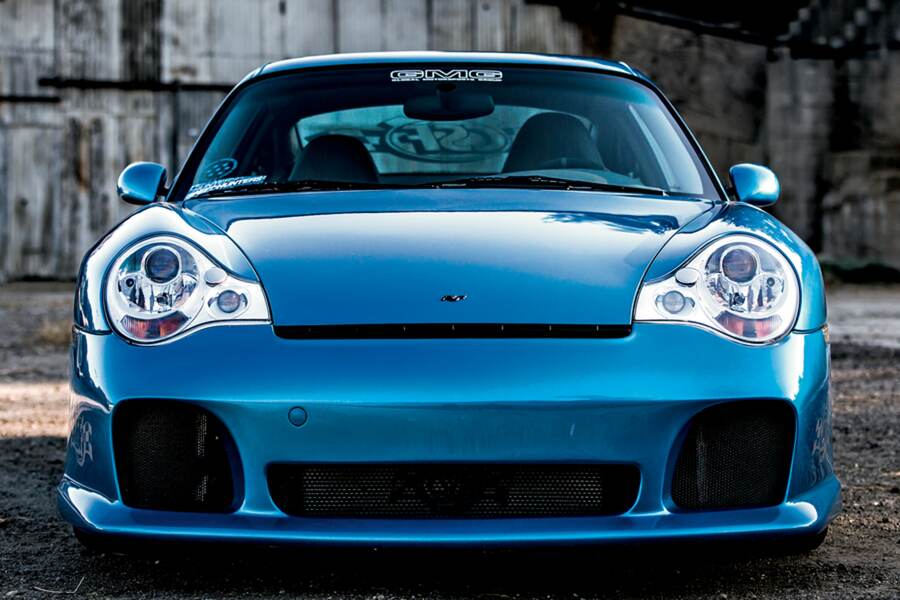 While this Turbo’s special-order factory Minerva Blue Metallic paint is the first thing that catches most eyes, the modified mechanical pieces underneath are what make it a gem. Many of the parts that motivate this now 500+hp machine were actually added by the two of the car’s three previous owners. After taking delivery of the Turbo, Dolwani dug into the vehicle’s service records and broke down just how the car was brought to its current state.

He found that the car’s first owner purchased the car in California in 2002. In addition to the stunning blue paint (which was a $3,460 paint-to-sample option), owner number one selected the $7,825 Full Light Wood interior package, the $3,540 Communication Management Package and a few comfort options that drove the car’s $115,000 base price up to $133,175. In 2005, after just four years and 5,000 miles of driving, the original owner sold the car to a buyer in Maryland.

Owner number two was a hardcore track-day enthusiast who wasn’t shy when it came to spending on upgrades. He had aftermarket turbos, three-inch intake pipes, 997 GT2 RS intercoolers, solid engine mounts, a reinforced coolant pipe, silicone turbo hoses, a 5 Bar (73.5 psi) fuel pressure regulator, forged billet diverter valves and a Speedtech exhaust fitted to the engine. When tested on a dynamometer, the tuned 3.6-liter turbocharged powerplant made 515 hp and 580 lb-ft of torque at the wheels for a gain of 100 hp and 165 lb-ft over the stock rating of 415 hp and 415 lb-ft. 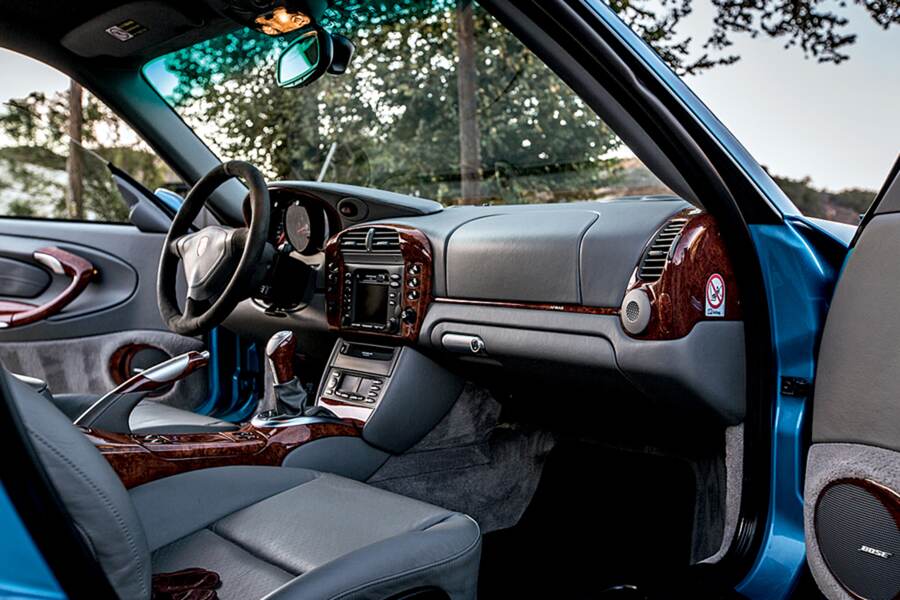 Further demonstrating how important tracking the car was to the second owner, he essentially replaced the entire suspension with a firmer and more adjustable setup. The car was lowered to 109 mm (4.3 inches) in front and 119 mm (4.7 inches) in the rear. Adjustable shocks, a camber plate, thicker anti-roll bars, GT3 lower control arms, adjustable upper control arms, rear locking plates and 450 lb/in front and 700 lb/in rear springs were fitted. For the brakes, six-piston front and four-piston rear 996 GT3 calipers and 350-mm (13.8-inch) rotors were installed. Dolwani has all the receipts the second owner kept for all the modifications and labor that total more than $100,000.

By the time the Turbo was sold to its third owner in a suburb of Chicago in 2011, the car had covered 28,000 miles. While the Turbo had the guts of a super performance car underneath, its appearance was still virtually stock. To address this, owner number three had a Ruf 550 Rturbo conversion done, which included a Ruf front bumper, 19-inch Ruf alloy wheels fitted with Bridgestone Potenza RE-11 rubber and Ruf side mirrors. A speed activated TechArt adjustable carbon fiber rear wing was also installed to complete the transformation. Due to some cracking of the originals leather, the third owner also had the front and rear seats covered in new hides, making for an interior that looks and feels brand new to this day.

When Dolwani bought the car in January 2015, it had just 34,500 miles on the odometer. The owner of a radiator company by trade, Dolwani installed his own CSF radiators in his new Turbo. He now drives the car on special occasions and autocrosses it on weekends. Although this car is just 14 years old, it was owned by a relatively wide cross section of Porsche enthusiasts. 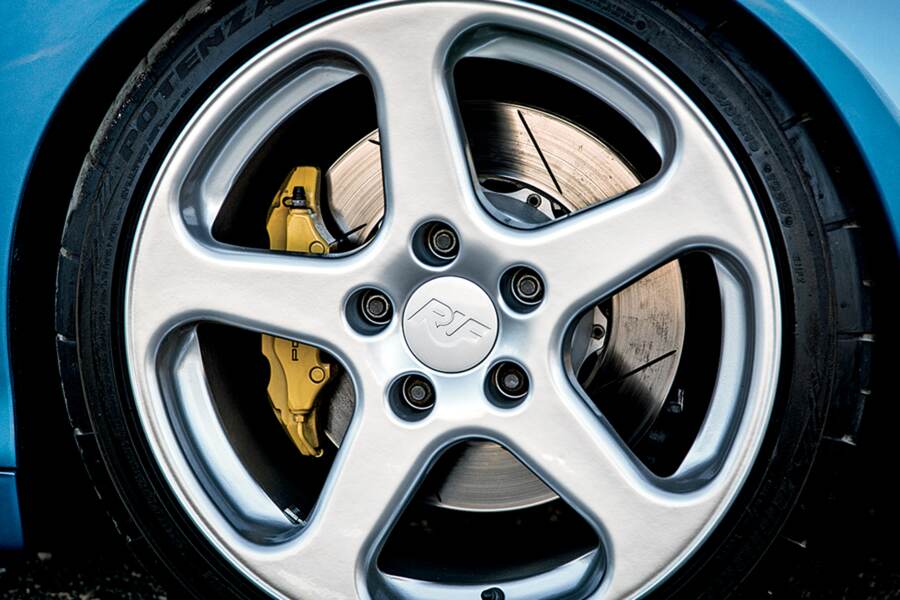 “As the car got older, the owners got younger,” Dolwani quipped. Owner number one was a Porsche purist in his 50s who wanted to keep the car completely stock. The second owner was in his 40s and wanted a stock-looking car that went like a Carrera GT. Owner number three was in his 30s and wanted a car that had supercar styling to match its performance. And now Dolwani, in his late 20s, is enjoying the Turbo that came to exist as it is from the work of enthusiasts who came before him.

“I think it’s a remarkable journey how this Turbo took a 13 year trip around the country, and returned to California a completely different vehicle than when it left,” summarized Dolwani. “Sure I could have bought a 997 Turbo for around the same price, but it would have been a normal color and stock with no mods. With this purchase, I was good to go right off the bat with something that is truly unique, and extremely difficult to replicate.” He then added, “ I got all the mods for a fraction of the price of what it would have cost me to do it myself.”

Few can argue against the fact that the 996 Turbo is one of the hottest more affordable super performance cars on the market today. And with a few modifications 996 Turbos can punch in the supercar category. For around $10,000-$20,000 a 996 Turbo can be tuned to produce approximately 600 hp at the flywheel reliably. Some (more daring) owners are getting 800-1,000+hp out of these machines. Not bad for a car that can be bought and beefed up for roughly the same price as a new base Cayenne. 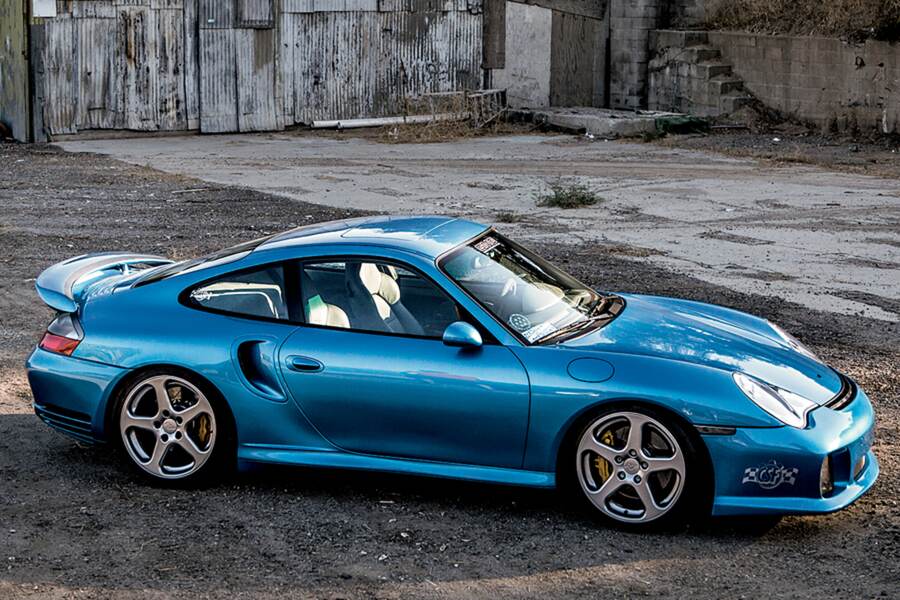 Wanting to feel just how much this Turbo has to offer, I yield the driver’s seat to Dolwani in Orange County. The plan is to feel just how this modified machine takes to the backroads of Orange Hills, Anaheim Hills and Tustin.

Right away I notice that the firmed-up suspension feels rock hard. While that’s not as much of an issue while hustling through tight bends on a twisty road, I can see it getting old in L.A. daily driving. On the plus side, the stump-pulling 580 lb-ft of torque put out by the boosted flat six produces tremendous acceleration when exiting corners. And you don’t have to work the six-speed gearbox constantly to get that sensation. The torque is so strong and the power band is so wide that this Turbo produces some serious thrust even when the engine is running at relatively low rpm in sixth gear. At 70 mph you can leave this Turbo in high gear, forget the lower ratios and still crush most rivals!

Dropping down a cog or two produces even more wide-eyed performance. I can see why this car’s second owner thought this was a fun car for the track. In tight turns the car doesn’t just put up with being pushed, it feels like it wants to be pushed! When the time comes to bring this hustling Turbo to a halt, the big 350-mm brakes bring things to a stop quickly without even the slightest hint of drama.

The Porsche factory worked hard to ensure that the 996 Turbo’s aerodynamics didn’t produce any lift. With the addition of the Ruf and TechArt body panels and pieces this Turbo feels more stable at speed than stock examples. It also feels dead stable at 150 mph…or so I’ve been told.

“I’ve driven a lot of water-cooled Porsches, especially 996, 997 and 991 models,” said Dolwani. “There is something special about driving a well-modified 996 Turbo compared to a stock 997 or even a 991 Turbo. It’s pure driving engagement, which I think gets lost in newer cars. You get rid of all the technology, buttons and really get back to the heart of driving, especially with it being a six-speed. This is why I opted to buy this vehicle over something new or less modified.”

After the test drive commences I get back into my own 996—a 2003 Carrera Cabriolet that serves as my daily driver—and can’t help but feel that my car is slow. I pull away and admire a blue streak as it gets smaller in my rear-view mirror. All the modifications Dolwani’s Turbo has gotten over the last 14 years have resulted in a machine that goes like a much newer performance car. There are some who say that a 996 Turbo is 85 percent of the 997 Turbo at 50 percent of the price. I would have to agree. 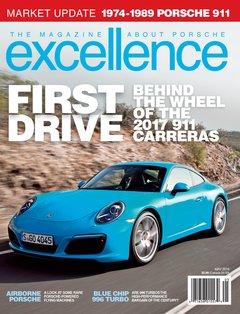