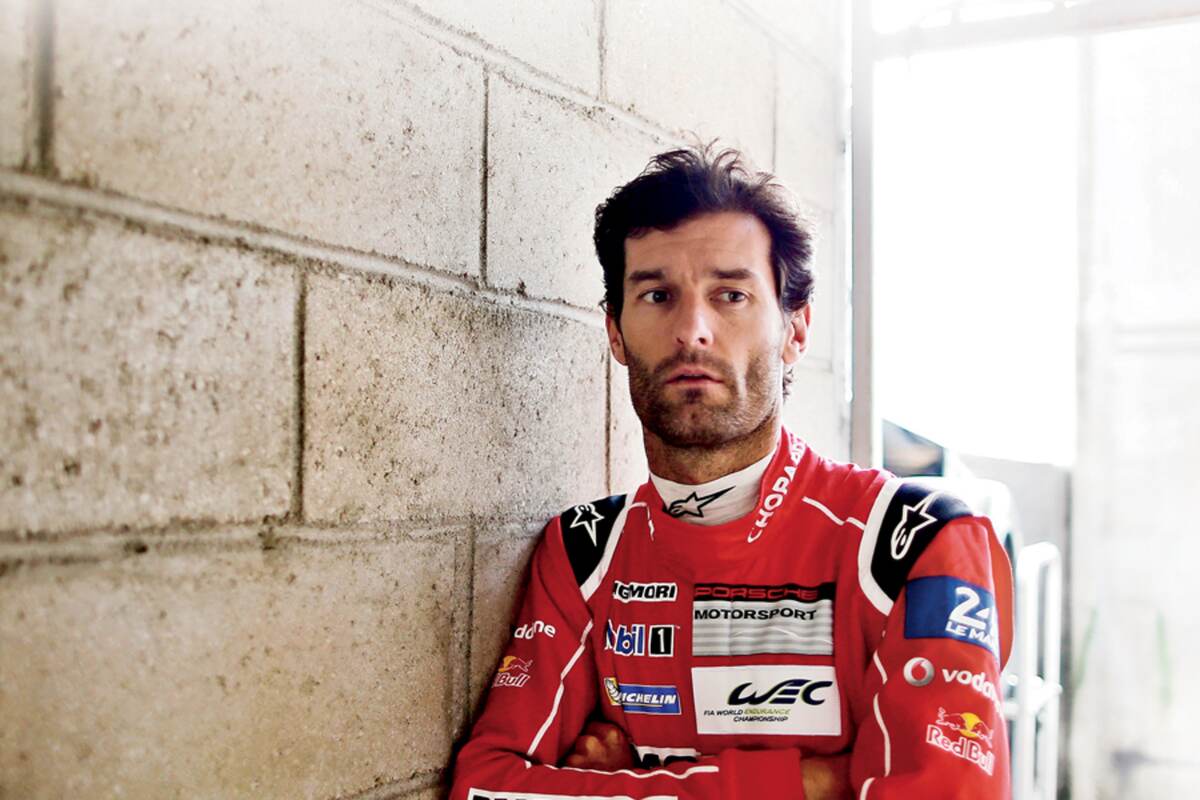 An auto manufacturer’s racing program traditionally represents the pinnacle of its technological potential. At Porsche, though, its street car and motorsport departments are on equal grounds, work together to help enrich one other. One man with a foot in both divisions is Porsche factory driver and ex-Formula One star, Mark Webber.

Webber joined Porsche in 2014 to compete in the World Endurance Championship (WEC) in the organization’s new LMP1 sports prototype, the 919 Hybrid. The 919 has proven to be a pinnacle in Porsche’s technological ingenuity claiming multiple victories, including four with Webber and a victory at Le Mans earlier this year.

The Australian took time out of his hectic weekend schedule, at the Circuit of the Americas WEC race, to discuss how Porsche’s demanding advancements in technology have benefited both its motorsport program and its street cars.

Excellence: What enticed you to join Porsche after leaving Formula One?

Webber: I’ve had a good relationship with Porsche over the last couple of years. When I was getting closer to the decision to stop F1, I knew I still wanted to race at a top level and keep challenging myself. You don’t ignore it if Porsche comes knocking on your door—it was too good an opportunity to turn down. I had 911s long before I was with Porsche, from the 997s through now to the 991s. It’s the most famous sports car brand in the world and for me to join their return to Le Mans and the World Endurance Championship was a no brainer.

Excellence: How does the 919 drive compared to a Formula One car? 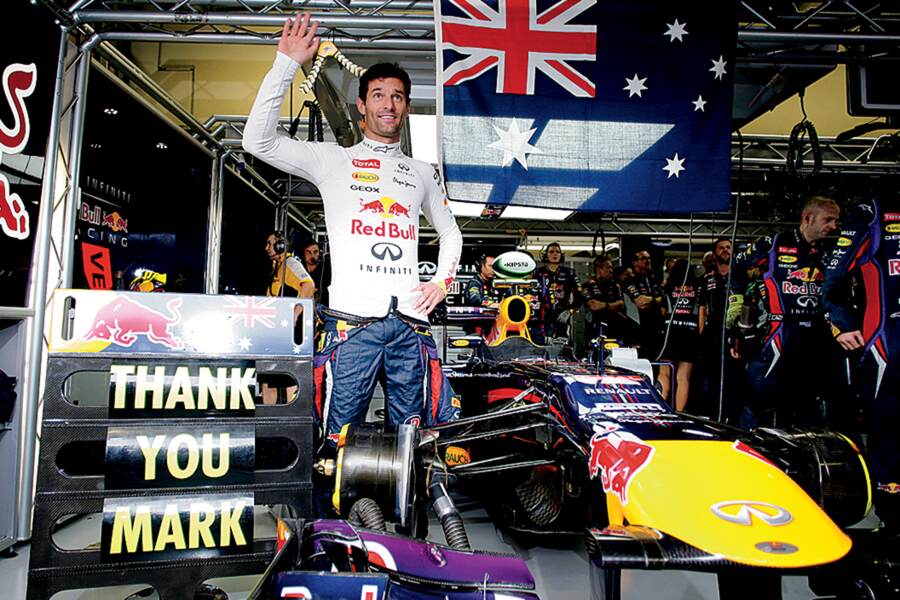 Webber: On the physical side the sports car is a bit more straightforward as the loads on the body are lower compared to being in an F1 car. On the longer straights you can relax a bit more because the cornering speeds are a bit less since the cars are heavier by regulations and the forces are a bit less on the driver. My heart rate in the F1 car was 160 driving in racing conditions. In sports cars it’s probably 120, which is a lot less.

Mentally, I’d say racing in a sports car is more demanding as there are so many other factors than driving you have to take into consideration like the traffic with the backmarkers. You’re passing six or seven cars per lap and you have to be really focused and concentrated on when and how you pick these off.

Excellence: With the 919 being a hybrid, how beneficial and important has the hybrid technology been to the race car and Porsche in general?

Webber: The whole car is designed around that [the hybrid system]. It is a massive component for performance and with such an open regulation. This is going to benefit a lot of technology in the future. That is why it is extremely important for Porsche to understand this technology in a very aggressive environment, which is racing with, obviously, the best engineers, the best drivers trying to also critique and get in a good window for operational purposes on the race tracks. And then you can take it to the everyday street car, eventually. That’s the exciting thing for us. We know we’re part of a long chain, but it’s going to close the loop at the end of road cars of the future.

Excellence: With the hybrid system in the 919 deriving from the 918, can you feel a similarity between the two?

Webber: Oh yeah, extremely similar. There is an incredible amount of power, obviously, from the E-Motors. This is the most attractive and exciting thing about driving the cars for the first time: how much torque and how versatile and how much power the system has. This is uncharted waters and extremely rewarding to go drive. Obviously, with the race car, we are a lot more aggressive. I mean, I’ve had 918s on the race track, but to drive them on the street, obviously you don’t drive them like that on the race track. You can if you want. But the race track is the best place to test technology to the limit. 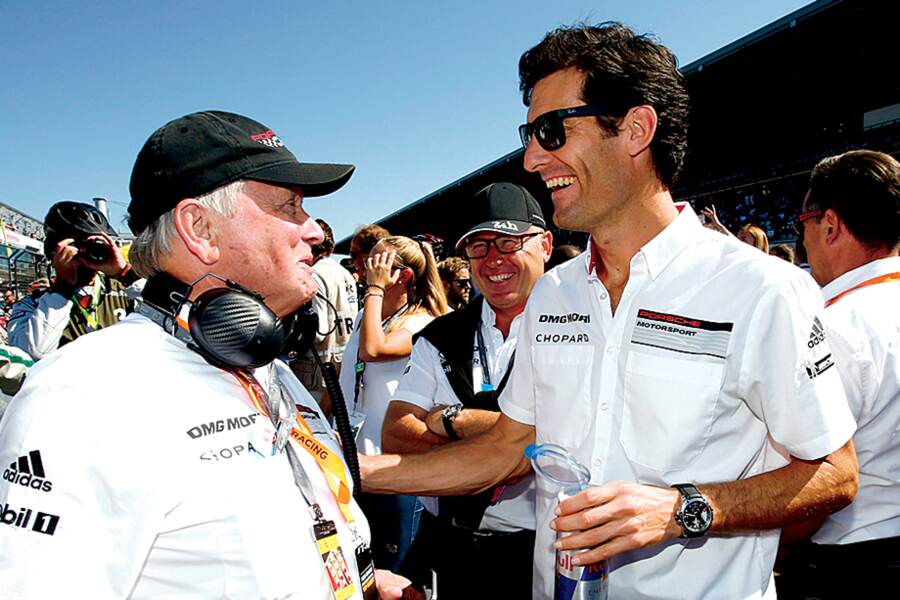 Excellence: How developed do you feel Porsche’s hybrid technology is?

Webber: Oh, there’s a long way to go. I think on the race car we’ve still got a few years before it might fall off a little bit, but then that is, obviously, another four to five years into the road car’s production. Look at the 918. It’s just incredible. It was really before its time. You’ll look at that technology in 10 years and say, ‘Okay, it was a sensational effort for that time,’ like most cars. But in 2024, I’m sure we’ll be on another level.

Excellence: How well developed is the hybrid system currently in the 919? Has it changed your driving style at all?

Webber: Not a huge amount. In the early days, again, let’s say we had to improve a lot. Now we’re getting very, very good. The system is very user friendly for the driver. And that is, obviously, the end goal. We want that to be like that because we race in all conditions. It could be raining. It could be slick. So, we prepare for all conditions.

We are very demanding on the engineers and that is why it is good to have this demanding scope of operation for a hybrid system, because on the braking, on how you use the drivability, on power, that is very important that you get that right. And that comes from us working with the guys. It is pretty good now. You don’t need to change much at all.

Webber: I don’t think it is forced that much. I think it is a natural evolution within the company’s DNA. They know producing beautiful sports cars for the road has to start on the race track. And that has been happening a lot for so long now that it has always been a tough environment to get cars tested in the racing environment with the fastest guys in the world driving them. 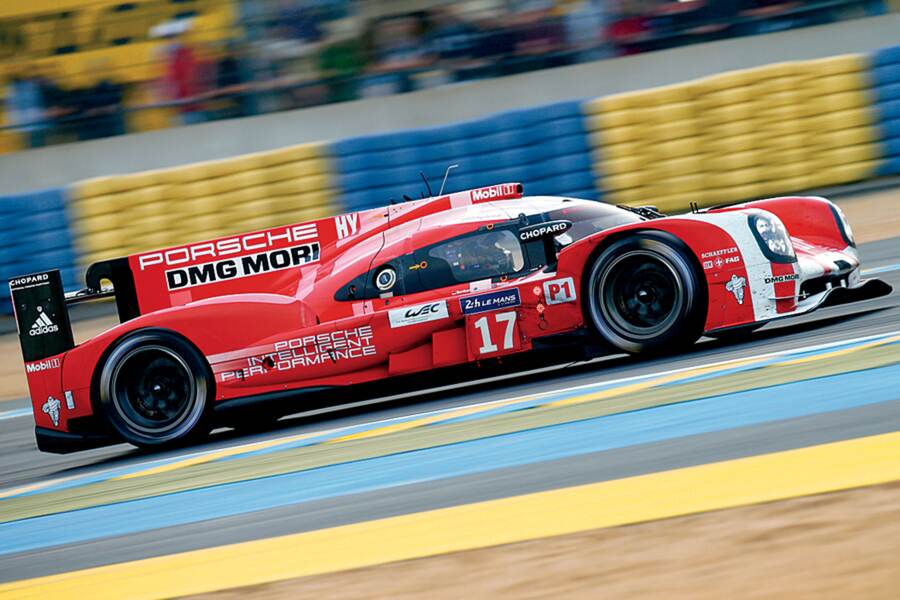 Whether it’s back in the early days with Le Mans or current times now, which, clearly, the hybrid side now is on a very aggressive curve. It is an area where there is still a huge amount to improve, which we’re still learning about. Many would argue, of course, we’re the leaders in this area at the moment, because a lot of people are trying to match us at the moment, on the track.

Excellence: Is the implementation of racing technology integrated into all Porsche models, from the Boxster to the 918?

Webber: Oh yeah, absolutely. You’re already seeing a bit of downsizing with the new 2017 3.0-liter Carrera. This is the direction things are going with the fantastic turbo technology. The turbo engines now are unbelievable, with low fuel consumption and very, very good power. So this is like what we have on the race car.

Excellence: Did the development of a turbocharged engine for the Carrera derive from advancements in racing technology, emissions demands or a bit of both?

Webber: I think both. You see the demands from the powers that be right at the top. They want better emissions. They want it to be super-efficient. These demands across the board, from an automotive perspective, obviously, you’re looking in the areas where you’re not compromising performance, but you keep the fuel flow very low. Then you also say, ‘Okay, let’s also have the race philosophy like this because it’ll also help out.’

Excellence: As a Porsche works driver, do you have much involvement with any future projects? 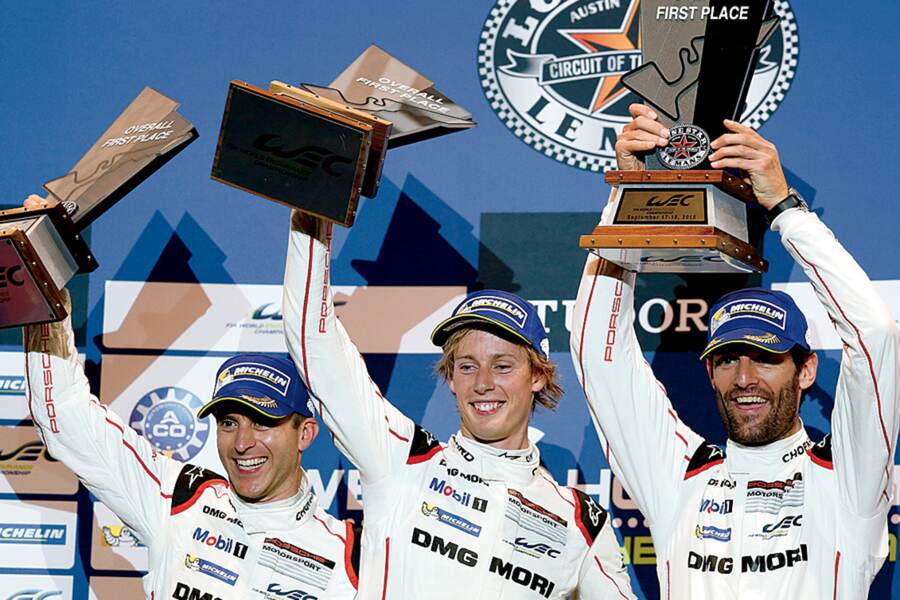 Excellence: For a track inspired street car like the 911 GT3 RS, how close is the feel to an actual race car?

Webber: For a street car, the GT3 RS is an absolute weapon. It is an incredible car, it’s raw and it gives super feedback, in terms of emotions. You feel like you’re in a quick car.

Excellence: What was your involvement with the development of the GT3 RS?

Webber: I didn’t do much mileage in the GT3 RS, but the mileage I did was pretty fast and aggressive. The topic we were working on that day was the control of a differential. Not that exciting, but extremely important for both the car and driver.

Excellence: The next step in Porsche’s future appears to be the new Mission E concept, which is said to use 919 technology. Do you have any insight into the concept and the 919’s involvement?

Webber: I don’t, but I really believe there will be some information transferred across. The 919 is the godfather of technology and it’s going to benefit all ranges in a very positive way.

Excellence: What is the next step for the 919 and its technological contributions? 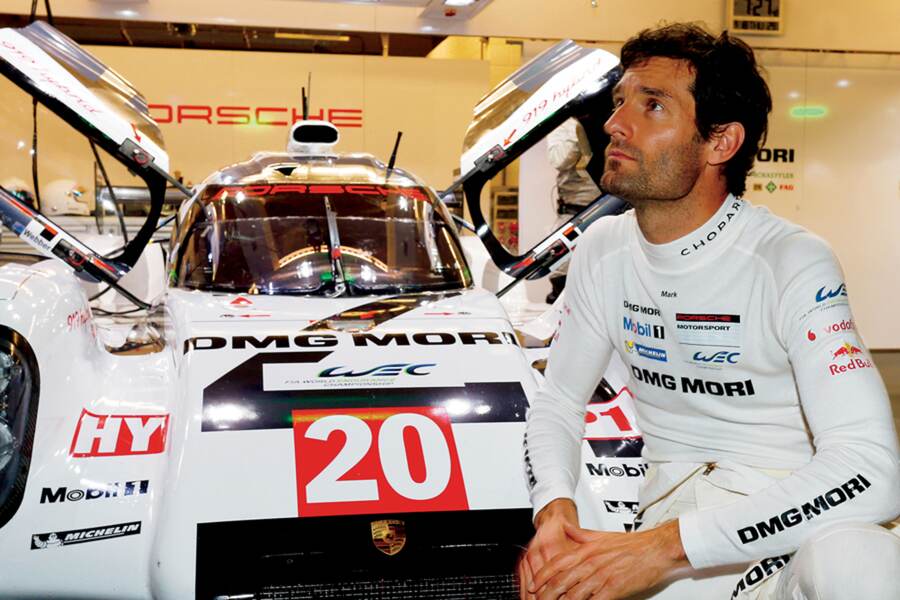 Webber: There are definitely areas of where we can improve. A little bit on the combustion side, so on the engine. Obviously, there is very small displacement with the 2.0-liter. That is something we are still learning and getting even better on that area. Of course, aerodynamics, which is more different to road cars, obviously, but on the racing side we are doing a big step there in understanding that.

There are very, very interesting demands which are still not complete. Of course making the car lighter, making all these basic needs to enrich racing, we have. Which, again, in terms of materials and things you learn will go toward road cars.

Excellence: For the 918 and 919, do you think the hybrid system is most beneficial in terms of power or mileage?

Webber: In terms of the hybrid systems on our two supercars, I would say the initial reaction is that the power of the system is very overwhelming, even for someone like myself. In the last three or four years, Porsche engineers have learned so much about this technology that it’s been a pleasant surprise to all of us. The usability of this torque on both street and track is something I still can’t believe—and there’s still more to come!

Excellence: With technological systems in race cars becoming more complex, like the hybrid system in the 919 and more, is that at all intimidating or is it more exciting?

Webber: The technology development in this industry is very advanced. When I heard of this technology coming into motorsport a few years ago I was curious to see how this would develop. With Porsche, we do a huge amount of transfer of technology from the race car to the everyday sports car. The DNA of Porsche road cars are carried over directly from motorsport and you can see the same components from our racing car on the road car, which is quite an exciting process. The 919 Hybrid is the most complex racing car Porsche has ever built and, with its hybrid technology, it’s quite remarkable to see how much power it can generate and hardly make any noise.

Excellence: With the Porsche road cars you have driven, aside from the 918, is there another model that really impresses you? And why?

Webber: The 919 is the crème de la crème, but I must say I have been incredibly impressed by the 997 RS, both the GT2 and GT3 4.0-liter, and if you’re looking for a slight level below, the Turbo S is a weapon. 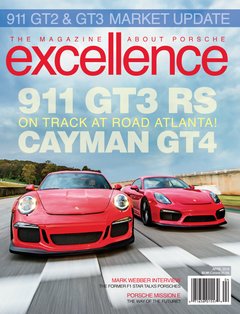