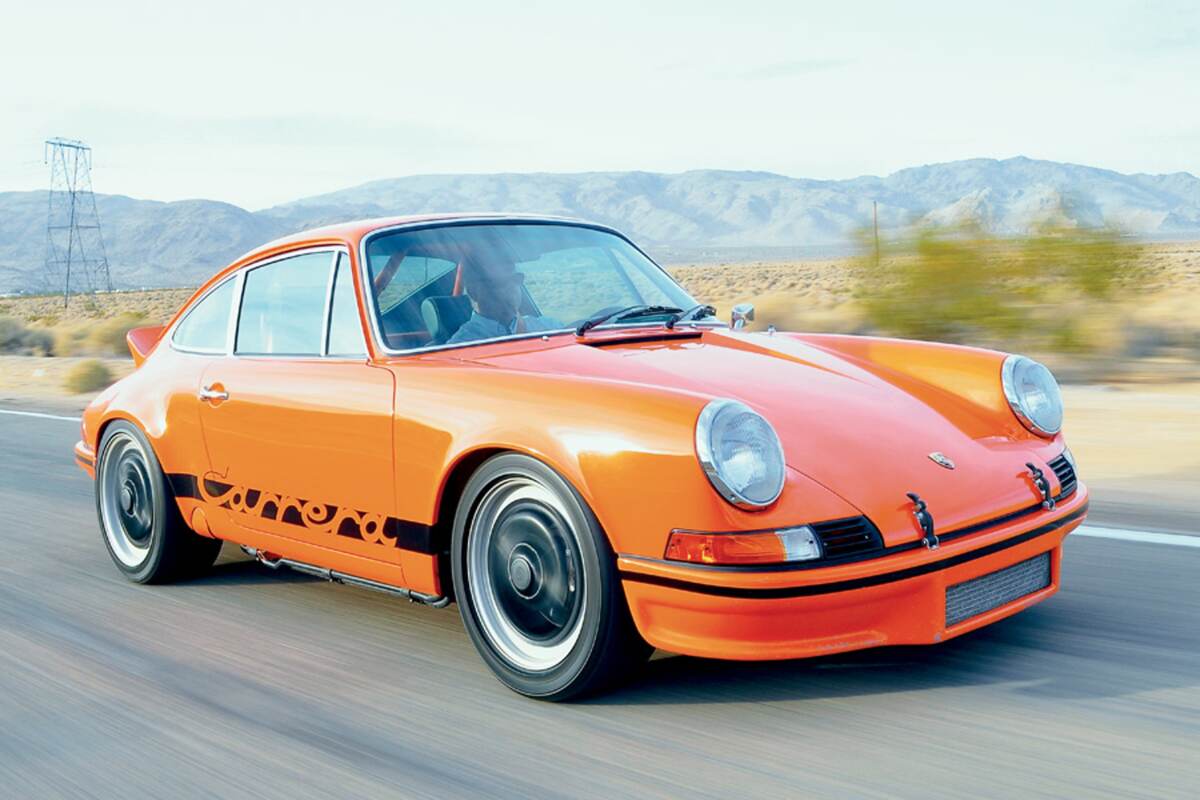 It always feels faster from the passenger seat, when you’re not the one in control. So when this 911’s owner, Robert Friedman, braced himself with a stiff arm to the headliner and two feet planted firmly on the floor as I started to work my way through a tangled series of switchbacks, I asked him, “Is this too much for you?” He replied, “No, I’d go twice as fast.” Not wanting to disappoint him, I picked up the pace with a little extra throttle out of the corners.

Friedman’s car, a Carrera RS homage based on a 1969 912 chassis, responded willingly, becoming sharper with the extra velocity. Each turn of the heavy, unassisted steering resulted in clean, laser-guided arcs towards the apex, with the Bridgestone tires staying glued to the road. Roll, dive and squat are kept in check by a set of adjustable Fox shocks and Smart Racing Products anti-roll bars.

Getting on the throttle for short bursts between corners, the 3.5-liter in back had that enviable combination of low-end torque and top-end ferocity that everyone wants but not everyone has. It also had an impressive 8,000-rpm redline, which let me hold second or third gears between the corners. But it didn’t fully reveal itself until our test route stretched out onto longer straights.

On the first straight, I shifted early, just before 7,000 rpm, trying to be careful with the owner riding shotgun. Friedman, disappointed that I didn’t take it closer to redline, encouraged me to stay on it until the tach needle hit 7,500 rpm. And while the short shift at 7,000 was impressive enough, those few extra angry revs made it exponentially more exhilarating. 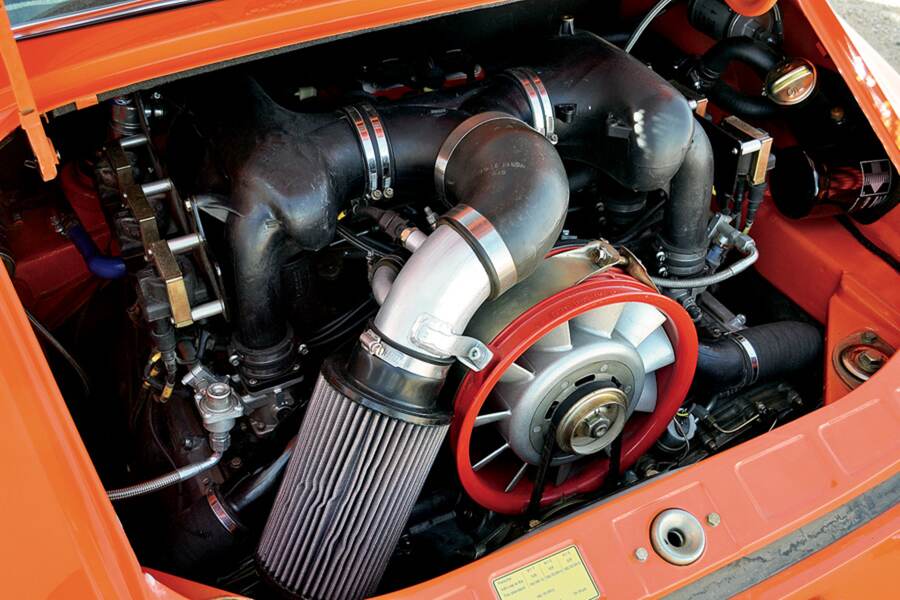 Shifting into third gear and hard on the throttle once again, the front end got just a smidge lighter as the rear end squatted from the weight shift and the ducktail’s downforce. Into fourth gear until around 115 mph, the suspension had a hard time keeping up with minor irregularities on the asphalt, causing the car to jiggle. Good thing, though, because we were running out of road.

You look to benchmarks when comparing cars, to get some perspective. The one car that came to mind as I wound it down from those high-speed blasts was the 996 GT3. Both cars were motivated by rev-happy powerplants that felt best near redline and had an uncanny smoothness and precision about them. And both cars were suspended on taught underpinnings that focused on getting the most out of the contact patch, not concerned about whether it would spill your coffee over taller bumps. They were also both Spartan and unencumbered by dead weight. 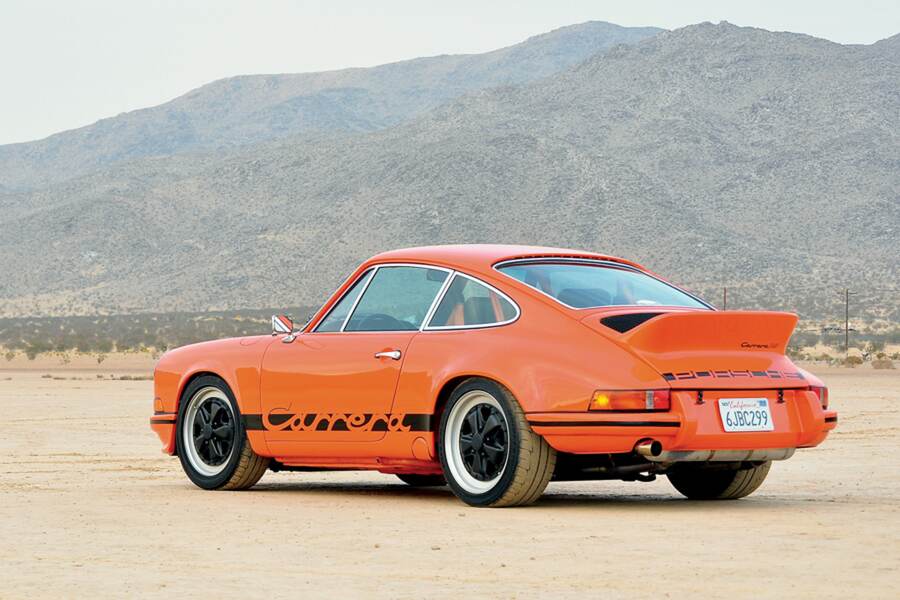 Friedman’s journey started in October 2007, when he got a call from his friend Simo Veharanta at SV Auto in Ontario, California about a 912 shell that had just become available for sale. Veharanta and Friedman had often talked about their plans to hot rod an early chassis and Sivo told him that if he didn’t jump on the 912, he’d buy it for himself. Friedman, trusting Veharanta’s judgment, bought it without looking at it.

“This was not going to be just another 911 with the RS flares and decals,” he said. “This car had to be special in every way mechanically.” And as a former president of the San Gabriel Valley chapter of the Porsche Club of America, Friedman had seen more than a few beautifully executed classic 911 hot rods. He knew what it took and relished the challenge.

Friedman and Veharanta stripped the chassis down to a bare tub at Veharanta’s shop and then had it chemically dipped to clean it and reduce its weight.

“We could have gone with a carbon fiber or fiberglass hood and doors in an effort to shave off even more pounds,” said Friedman, “however, for safety reasons I decided to stay with steel body parts—other than the bumpers and engine lid.” 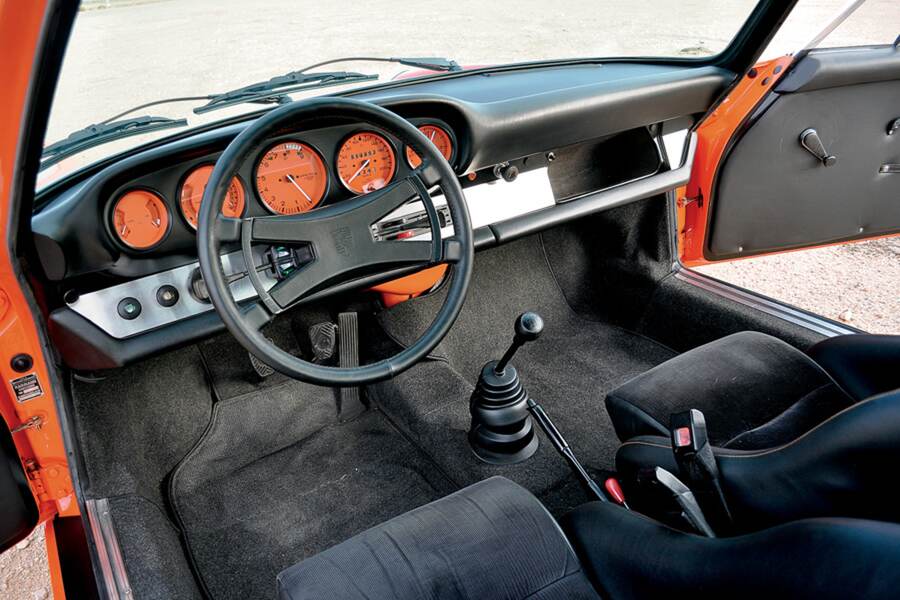 While Veharanta prepped the car for the body shop, Friedman began his search for an engine builder. A friend referred him to Loren Beggs of 911 Design in Montclair, California. It didn’t take more than a phone conversation for Friedman to realize that he and Beggs were on the same page.

“He understood what I wanted to do with the car,” said Friedman. “Between the two of us, we came up with a game plan for the mechanics.”

Friedman found a Carrera 3.2-liter flat-six engine and sent it to 911 Design to begin the build. Using the stock crank, Pauter rods and 100-mm Mahle pistons and cylinders, they increased its displacement to 3.5 liters. The heads were extrude honed to clean up the ports for better flow and Aasco titanium retainers and valve springs replaced the stock pieces.

To add a little mystery to the equation, Beggs specified a pair of camshafts that would work well throughout the rev range, the specs of which he’d rather keep secret. On top of the cylinder heads are Rothsport individual throttle bodies paired with a modified intake plenum from the 964’s 3.6-liter. To get everything to work in harmony, Beggs chose a Motec M800 ECU, a system he’s familiar with because he uses Motec on his race engines. 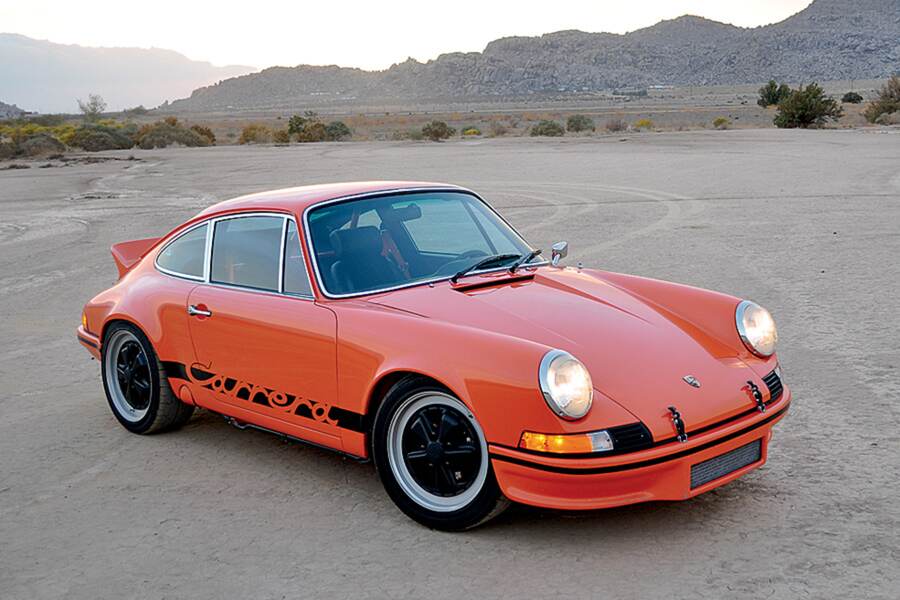 They tuned the engine on 911 Design’s Dynapack chassis dyno and recorded 287 hp to the wheels, or around 330 hp to the crank. Friedman said they could’ve gotten as much as 30 more horsepower by using a less restrictive but louder exhaust and velocity stacks instead of the 964 plenum, but that would’ve hurt low-end torque.

From start up, it idles quietly through the Dansk exhaust and pulls easily off the line with the Sachs Sport clutch. The readily available torque makes it feel larger than 3.5 liters and yet there’s smoothness about it that makes you think it’s a smaller engine with lighter internals. Three thousand rpm is as relaxed as 2,000 rpm in another flat six and it doesn’t feel strained when holding high rpms.

As is always the case, it’s never as easy as when you first plan everything, but with Beggs’s experience, they were able to get the car they wanted.

“The key, other than horsepower, was reliability,” said Friedman. “As I explained to Loren, I wanted to be able to drive the car hard all day long, and not have to worry about over-stressing the engine, and that’s what we have. You can drive flat out all day.” 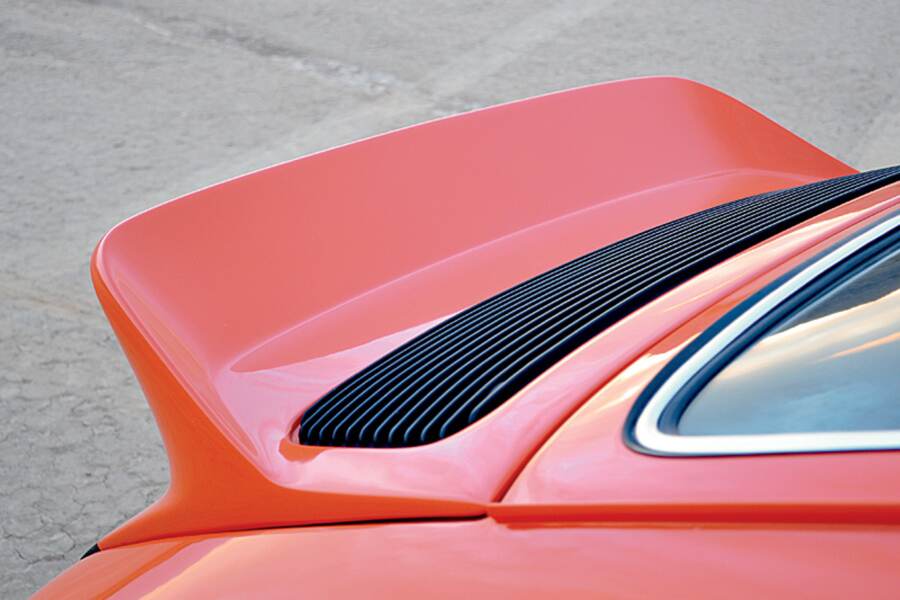 While the engine was being built, Friedman sent them a G50 five-speed transmission off to be rebuilt with steel synchronizers. The rear differential was upgraded with a Guard Transmissions GT limited-slip unit. Friedman also acquired a complete suspension from an 1988 911 Turbo Look and most of the components, minus the thicker torsion bars and a torsion tube from the factory that came later, that were installed. The braking system from the Turbo Look was transferred over and that included the donor car’s brake booster, which required some welding and custom fabrication to mount.

The body received a pair of authentic RS flares that Friedman acquired through Dave Buhain at Road & Race, Inc. in Los Angeles, which Beggs said were TIG welded for minimal distortion. And after a few minor rust issues were repaired, they welded in a four-point roll bar that fits closely to the interior surfaces, as Friedman requested, and then covered the chassis in Gulf Orange. The front and rear bumpers and rear ducktail engine cover are all from Getty Designs. 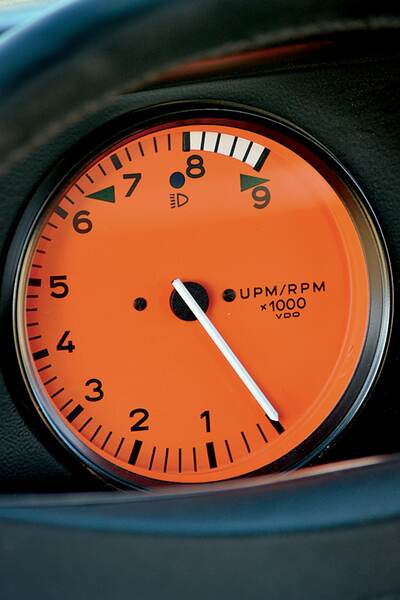 Friedman kept things simple inside by adding an authentic RS steering wheel, a refurbished dashboard and vintage rally seats from GTS Classic Seats. The gauge faces, which were painted to match the exterior, are the only modern touches.

After four years of building, Friedman finally brought the car home and then started getting to know it on his favorite canyon roads.

“The thing that impressed me right away was how light and agile the car felt,” said Friedman. “The front end was very responsive and easy to set in the corner. I’d not driven a car this light, with this power before, and it was intoxicating!”

And now, when Friedman meets up with his Porsche Club of American (PCA) buddies for spirited drives, his 2004 GT3 and 930 stay parked, tethered to their trickle chargers.

“Driving the older Porsches is just great fun,” continued Friedman. “So many have said that, but it’s true. The cars are more engaging, not necessarily faster, but you feel part of the car.” Compared to his GT3, he said, “I drive it periodically and that car is fun in a different way.”

Although it may be a bit of a stretch to compare Friedman’s classic RS replica to a modern GT3, their similar personalities can’t be denied. The shared spirit is there, even if the DNA has mutated and evolved. You could say that in an everything-comes-full-circle sort of way, Friedman set out to build an RS replica and ended up with a backdated GT3. 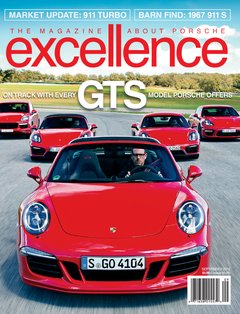