A look at how Porsche’s hybrids work 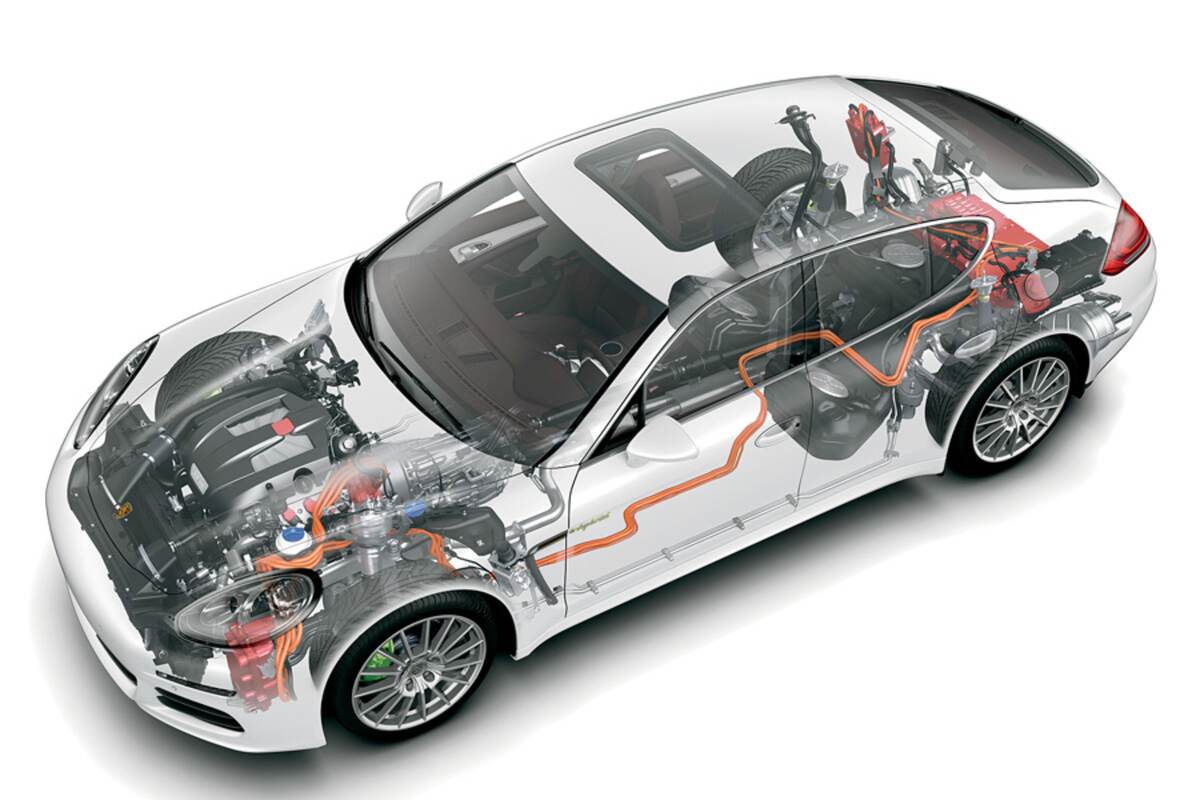 “Porsche Intelligent Performance” is all the rage in Zuffenhausen these days. The company has been touting its green energy credentials for the last few years, introducing hybrid versions of the Cayenne, Panamera, a 997 GT3-based hybrid race car, the 918 Spyder hypercar and the 919 Hybrid Le Mans racer. Even a hybrid variant of the venerable 911 is likely.

Students of Porsche history, however, will recall that a Porsche-designed hybrid is actually very old news: Professor Ferdinand Porsche himself designed the Lohner-Porsche Mixte gasoline-electric hybrid at the turn of the 20th century.

Current government fuel economy regulations and tax incentives in the U.S. and Euro Zone have compelled many auto manufacturers to offer gasoline-electric hybrids to the general public. However, the modern hybrid vehicle is the result of compromise.

Electric motors offer excellent efficiency and instant torque that is available from near zero rpm. Purely electric vehicles, however, have a limited driving range due to the constraints of current battery technology. Modern gasoline engines are woefully inefficient, converting less than 15 percent of potential fuel energy into motive force (the rest is wasted due to frictional losses, heat loss to the cooling system and exhaust and combustion inefficiency).

In theory, combining an internal combustion engine with one or more electric motors offers the best of both worlds, blending the instant torque and economy of electric drive with the range and extra high-speed acceleration that is possible with a gas engine. In practice, it is a challenge for automakers to package all the necessary electronics and battery packs into existing chassis. There is also the question of whether hybrid drivetrains yield enough of an improvement in efficiency over modern direct injection diesel and gasoline engines to justify their additional weight, cost and complexity.

Though the gasoline-electric hybrid may not be the ultimate solution for curtailing fossil fuel consumption or moving the auto industry towards perpetual sustainability, Porsche and others are utilizing the technology in a compelling manner to boost the performance and economy of already potent models.

Porsche’s first modern hybrid vehicle was the 2011 Cayenne S Hybrid. The Panamera S Hybrid, which used the same drivetrain, followed soon after. In 2014, the normal Hybrid version of each was superseded by a plug-in, “E-Hybrid” version with an extended electric-only range. 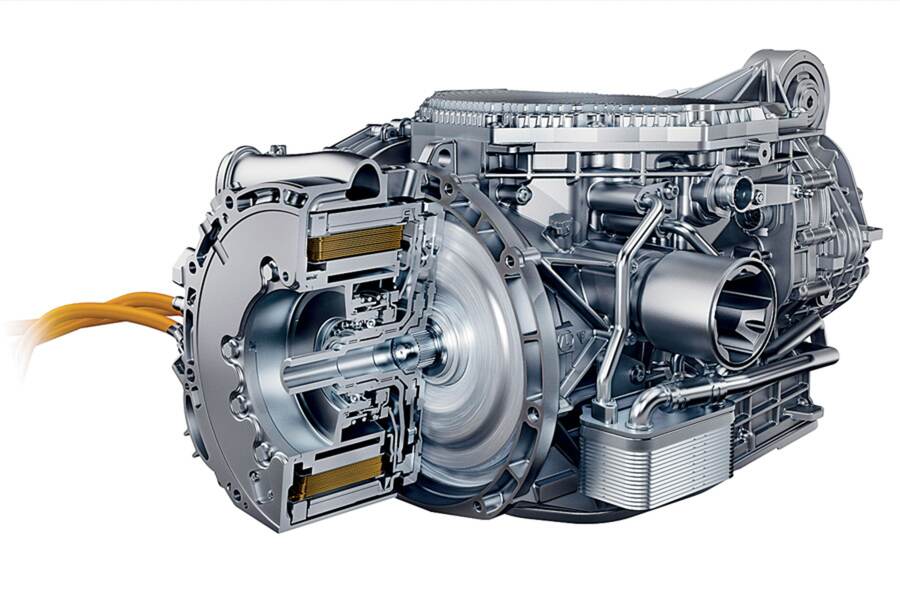 The Porsche hybrid drivetrain is billed as a “full parallel hybrid” design, as the vehicle may be propelled solely by electric power, the gasoline engine or a combination of both. Many other hybrid drivetrains on the market are considered “micro” or “mild” hybrids in that the electric motor is able to assist the gasoline engine, but the vehicle cannot move via electricity alone. A common feature of virtually all hybrid designs is the ability to convert the kinetic energy generated during braking to charge the on-board battery pack.

The popular Toyota Prius uses a parallel hybrid drivetrain, but the motive force of its gasoline engine and electric motor is distributed through an electronically controlled planetary transmission. In the interest of economy, the full potential of each powerplant cannot be combined at the same time to accelerate the Prius. In accordance with its sporting heritage, Porsche’s full parallel design allows maximum torque from the combustion engine and electric motor torque to be realized during acceleration.

The Cayenne and Panamera Hybrid and E-Hybrid models combine an Audi-sourced 333-hp supercharged V6 gas-powered engine with an electric motor (38 kW in the Hybrid, 70 kW in the E-Hybrid). The three-phase, synchronous alternating current (AC) motor can be described as a scaled-up version of the common automotive alternator. The motor is integrated into a module that Porsche refers to as the “E-machine,” which is only 150 mm long and is sandwiched between the combustion engine and a conventional eight-speed Tiptronic transmission. The E-machine is coupled and decoupled from the gas engine as necessary by an electro-hydraulic actuator that operates a dry clutch plate in the same manner as the clutch of a manual transmission.

Porsche hybrid powertrain operation is governed by an electronic hybrid manager that shares its housing with the standard combustion engine (DME) control module. The powertrain can operate in six distinct modes depending on battery pack charge and driver input:

1. Electric Mode: Power comes from the

engine is augmented by the full power of the E-machine. 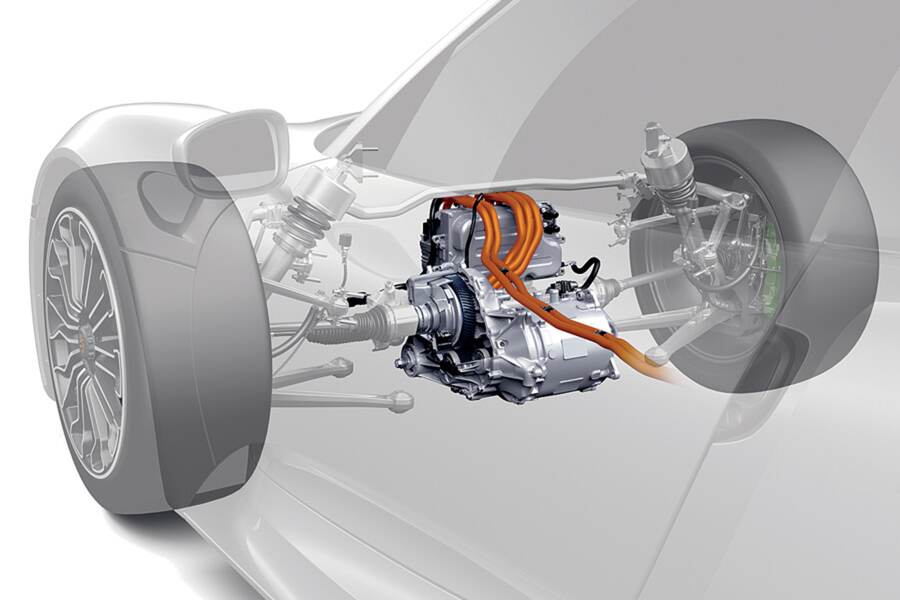 3. Load Point Shift Mode: The combustion engine and E-machine are coupled together and the battery pack charge is maintained as necessary.

4. Coasting: The combustion engine is switched off and decoupled from the E-machine, which is able to maintain speeds of up to 97 mph on flat ground with minimal load input and friction.

5. Regenerative Braking: Kinetic energy is recovered from braking where the E-machine operates as a generator to recharge the battery pack. The standard friction brakes are only engaged during hard braking.

6. Auto Start/Stop: This mode is used in stop and go traffic to switch off the combustion engine while stopped to save gasoline.

A large amount of electronics and processing power is necessary to orchestrate hybrid system operation. Porsche engineers designed the hardware and software of the decoupling clutch control and regenerative braking systems to provide seamless operation and a natural feel.

Heart of a Li-ion

The energy required to drive the electric motor is stored chemically in a battery pack located in spare tire well area at the rear of the Panamera and Cayenne hybrids. Porsche played it safe with its early Hybrids and used a proven and reliable nickel-metal hydride (NiMH) battery cell design. The NiMH battery pack weighs 176 lbs and is arrayed in 40 modules of 6 × 1.2-volt cells to provide a total of 288 volts to power the E-machine.

The newer, more energy-dense lithium-ion (Li-ion) battery cell design that powers most of our portable consumer electronics works well in small devices, but it can be problematic when stacked together in the quantity necessary to propel a vehicle. Lithium is an extremely volatile element, and Li-ion battery cells can easily overheat. Nonetheless, Li-ion technology has advanced rapidly enough to warrant the installation of such a battery pack in the Porsche E-Hybrids. 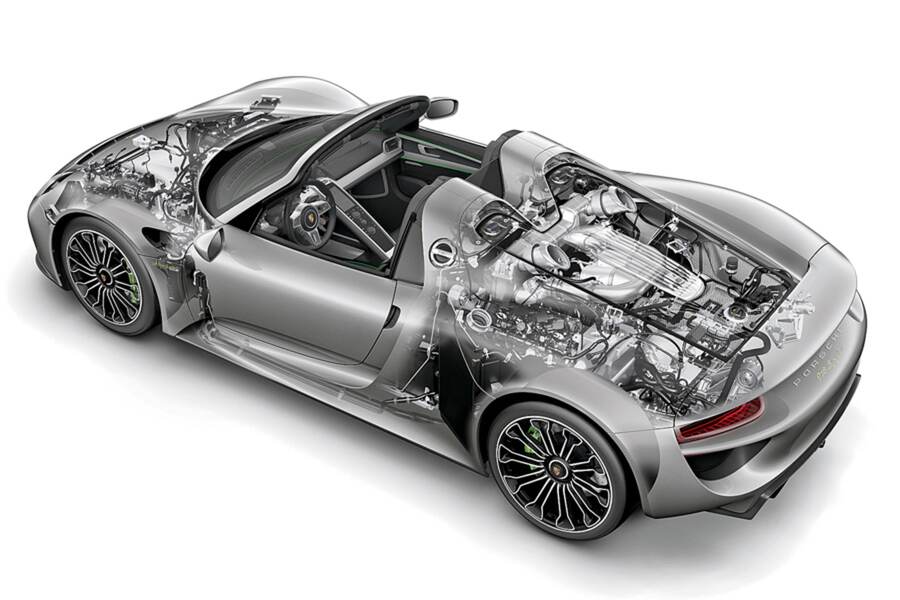 The 385-volt Porsche Li-ion battery pack fits in the same space as its predecessor, but its increased energy density means that its weight jumped to 298 lbs. However, this allows the E-Hybrid to drive up to 22 miles on electric power alone, compared to only one mile in the case of the first Porsche Hybrid. The higher voltage also results in the aforementioned twofold boost in electrical power output. Whereas air-cooling via electric fans is sufficient for the earlier NiMH battery pack, the Li-ion version has a dedicated liquid cooling system with its own electric water pump.

The presence of the E-machine negates the need for a conventional 12-volt starter motor or alternator. The possibility of electric-only operation requires an air conditioning compressor that is driven via high-voltage AC power instead of the usual belt drive from the combustion engine. The E-Hybrid battery control unit can also activate the air conditioning compressor independently of the driver to provide extra cooling to the Li-ion battery pack as necessary.

One of the main challenges of hybrid automation is converting the different forms of electricity generated by the system to suit the various on-board electrical devices. The battery pack supplies high-voltage direct current (DC), yet the E-machine is an AC motor. Most of the on-board accessories are powered by conventional 12-volt DC power, so a 12-volt battery is maintained as such. All Porsche hybrids employ a “power electronics” unit that performs all the necessary electrical conversions to ensure smooth powertrain operation.

The power electronics unit contains a pulse-controlled inverter to convert the high-voltage DC current supplied by the battery pack into usable AC current to drive the E-machine. Conversely, the same inverter rectifies the AC voltage that is recuperated during braking and uses it to recharge the high-voltage battery pack. A DC-to-DC converter is also present to safely convert the high voltage from the main battery pack to the lower voltage necessary to charge the 12-volt accessory battery. The rapid switching of the power electronics unit generates a lot of heat, so it is liquid cooled.

Ironically, if the on-board 12-volt battery of a Porsche hybrid becomes fully discharged, the vehicle will be inoperable because all the electronic control units that orchestrate the powertrain management use the 12-volt system. If this occurs, the 12-volt battery can be charged conventionally with a normal battery charger. The E-Hybrid has an additional on-board charging module to enable charging of the Li-ion battery pack via 120-volt home AC power, or with a special Porsche-designed 240-volt charging setup.

The 918 Spyder supercar uses the same basic plug-in hybrid system as the Cayenne and Panamera E-Hybrids with a few key differences. Because the 918 is an all-wheel drive vehicle, a second E-machine and power electronics unit supply the front wheels with torque as needed. The 918 uses the same size and voltage Li-ion battery pack as other Porsche E-Hybrids. The battery pack is, however, mounted low and directly behind the cockpit for optimal weight distribution.

The 918 can operate in the same basic hybrid modes as its E-Hybrid siblings. The addition of “Sport Hybrid” and “Race Hybrid” modes, however, enables the front and rear E-machines to augment the screaming 608-hp V8 engine for a combined peak output of 887 hp!

With the advent of hybrid vehicles, an ongoing concern is for the safety of service and emergency personnel with respect to the on-board high-voltage electrical system. The large high-voltage cables that connect the battery pack to the power electronics unit, E-machine and high-voltage air conditioning compressor are sheathed in high-visibility fluorescent orange and should not be touched or handled, even with the ignition switched off!

Only specially qualified technicians are authorized to service Porsche hybrids at the dealership level. If repairs to any high-voltage component is necessary, a special service disconnect plug is used to isolate the battery pack from the rest of the system. A waiting period is necessary to allow the components to fully discharge before work can commence. 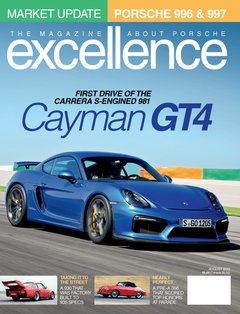