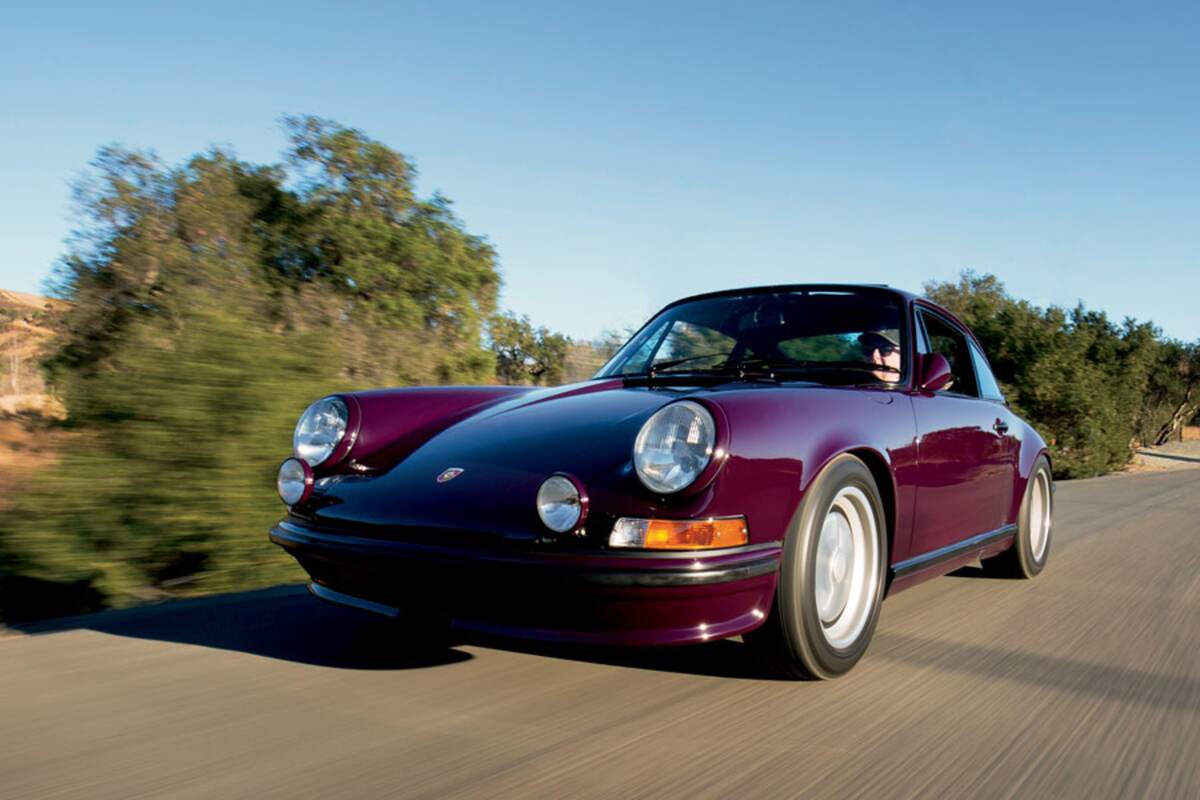 One of the things you can’t take with you when you pass on is your story. Like earthly possessions, it can define who you are. But a story does much more than that. It remains behind to show the differences you made in other people’s lives.

Roger Grago’s story did just that for two well-known California car communities. Roger was the president of the Volkswagen car club Der Kleiner Panzers, which he helped resurrect in the 1970s. He also led the early Porsche 911 club, R Gruppe, in Southern California during its formative years in the 2000s.

Roger’s character exemplified the qualities most important to both clubs. Genuine, compassionate and honest, he placed the greater good above himself. If wealth can be measured in generosity, Roger was a very rich man. Sadly, he lost his four-year battle with brain cancer on December 21, 2014 at the age of 61. 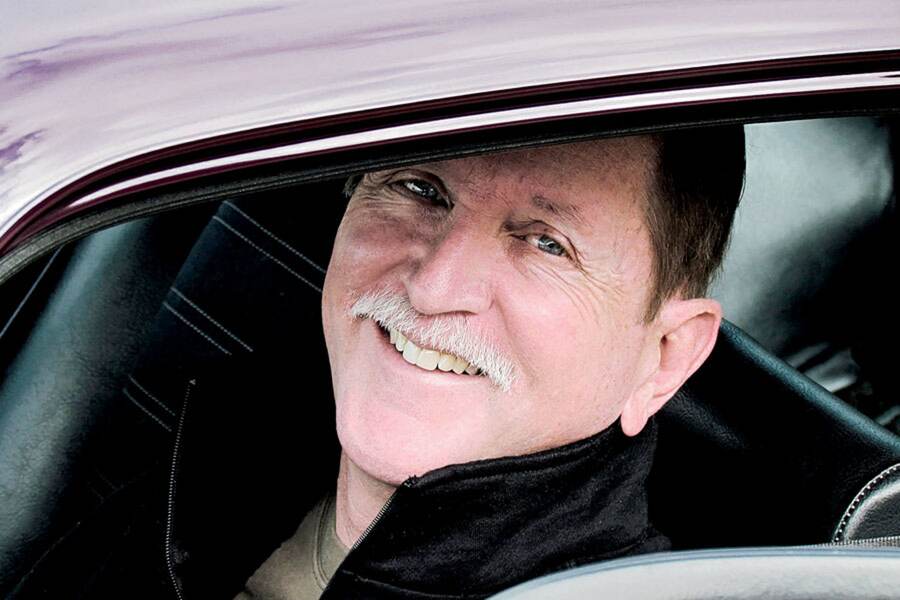 For decades, Roger’s enthusiasm for modified air-cooled VWs and 911s inspired thousands of like-minded individuals to become involved in the hobby. In the process, Roger earned the undying respect of hundreds of friends.

Over time, many club members discovered that their enduring friendships had become more important than the cars themselves. More recently, a rebuild of Roger’s own 1973 911 served to bring them closer together in a newfound way. 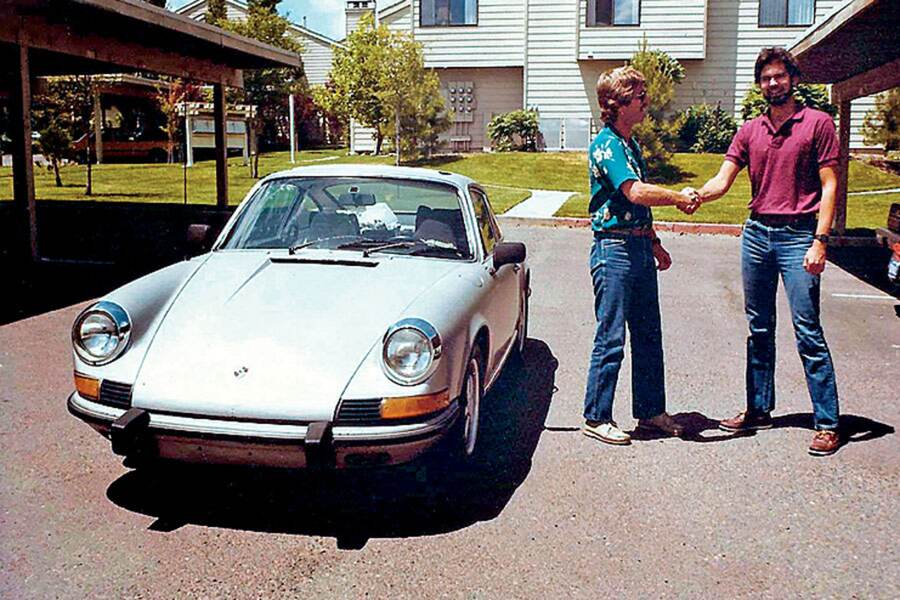 As a teenager, Roger lived with his family in La Habra, California. He found a job washing cars at Don Burns’s Volkswagen dealership in nearby Garden Grove. When Roger got his driver’s license in 1969, he bought a 1962 VW Karmann Ghia from his father, a decorated navy captain and pilot.

Cal-Look VWs, with their lowered stance, trick wheels and trimless bodies, were becoming popular at that time. Roger wanted the same look for his car. Many enthusiasts did not consider the Karmann Ghia a hot rod platform, but the silver-gray Ghia he built in the early 1970s went on to win numerous car shows and became an icon in Phase II of the DKP VW car club.

Roger also met Mike Sofka, who became a lifelong friend, at that time. They were neighbors and shared a passion for the marque. They continued to live close together, moving onto early Porsche 911s in the 1980s. 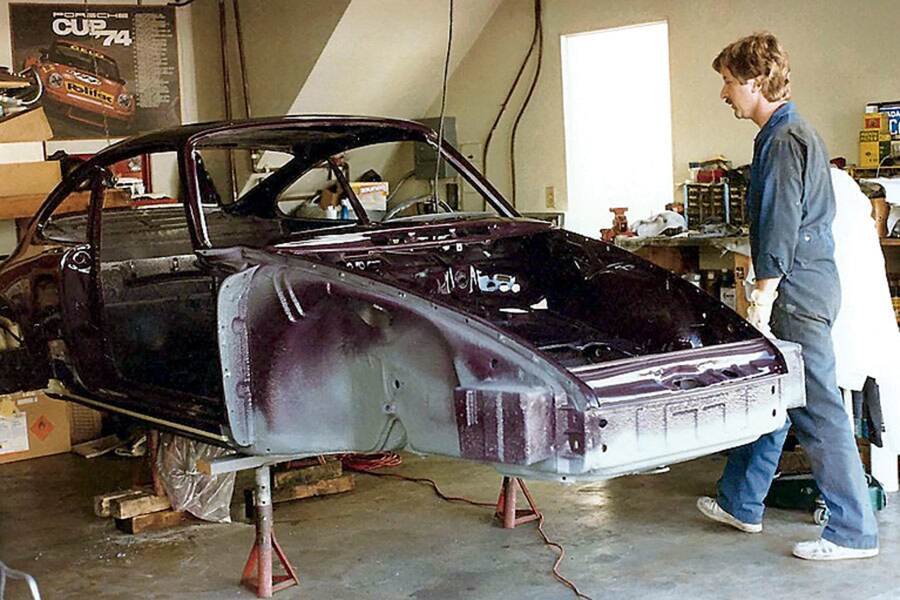 It was May 2000 when I first met Roger and Mike. I had traveled from Seattle, Washington to Cambria, California to check out a brand new hot rod Porsche club, and I’d left my modified 1972 911 at home. Soon enough, that felt like a big mistake.

Here were the coolest 1965-1973 911s I had ever seen gathered in one place, and they were all about to go on a driving tour. When I mentioned that I was looking for a ride, a kind voice replied he would be happy to offer me his passenger seat. That voice belonged to Roger Grago. As it turns out, there really are no mistakes.

That passenger sport seat was bolted to a beautiful Aubergine 911 with a 2.7-liter mechanically fuel injected RS engine and RS fender flares. By that time, Roger had owned his Porsche for sixteen years. He had modified it to his own taste, much like he had done with his Karmann Ghia years earlier. It was one of the first and remains one of the best RS clones I’ve ever seen. 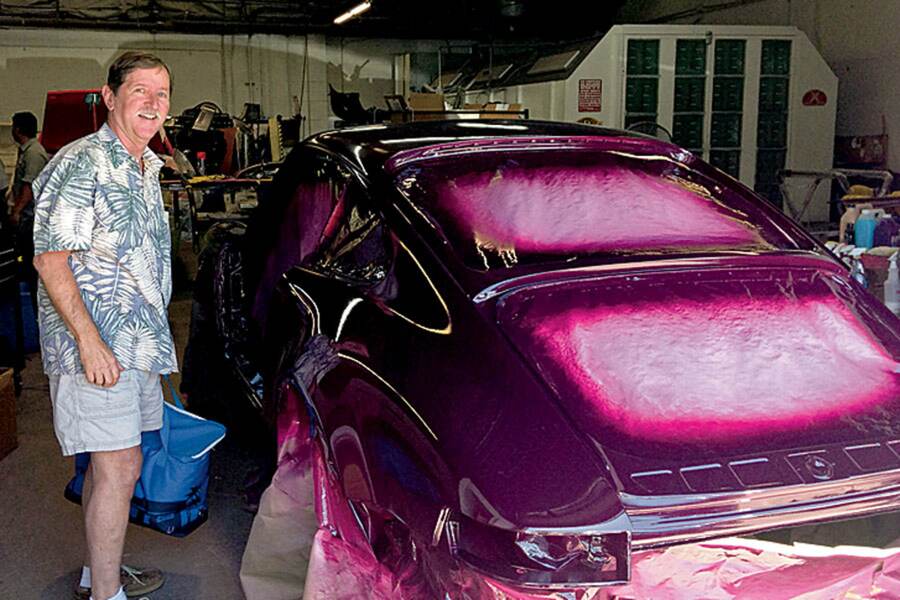 the first R Gruppe Treffen meet is the same one you see here, serial number 9113100635. Roger found the car (which was originally painted silver) in Reno, Nevada in June 1984, and he bought it with the idea of creating a custom 911. It would become what he believed Porsche may have built in 1974, if there had been no U.S. impact bumper and smog laws. Yes, even then, Roger was a maverick.

Within a week of purchase, Roger had completely dismantled the one-owner sunroof coupe. What he found was a rust- and accident-free chassis. Off came the narrow rear flares, and on went genuine RS flares. Correct factory RS bumpers, an RS ducktail, muffler skirt and an S front spoiler quickly followed. 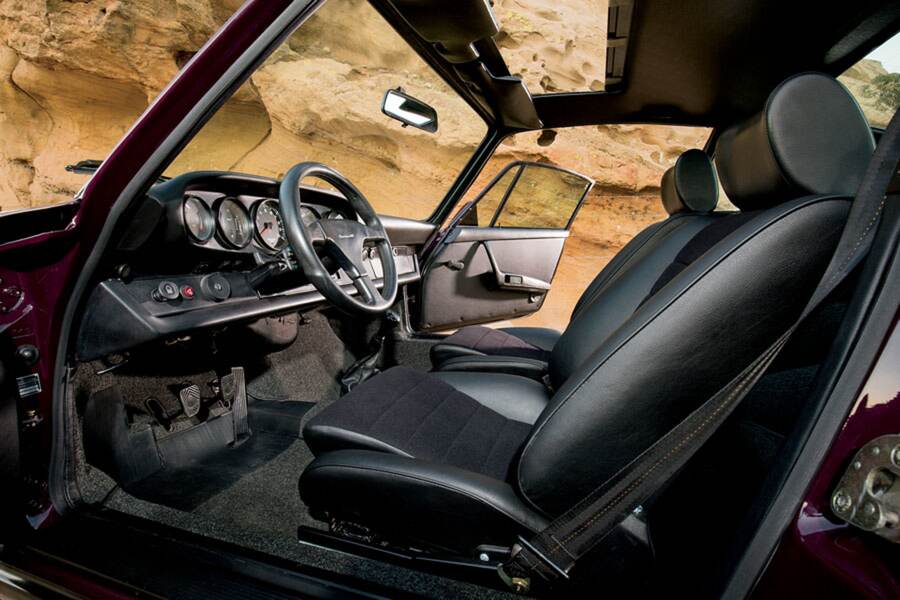 To complete his vision of what might have been, Roger swapped the side deco trim and torsion bar covers for 1974 G-Series 911 pieces. He then had the anodized window frames and door handles sprayed semi-matte black.

The all-silver car was then painted Aubergine acrylic (code 025) at Amato’s Auto Body in San Diego. The factory front driving lights, H-1 headlight rings and 935-style side mirrors were also coated in the eggplant-colored hue. 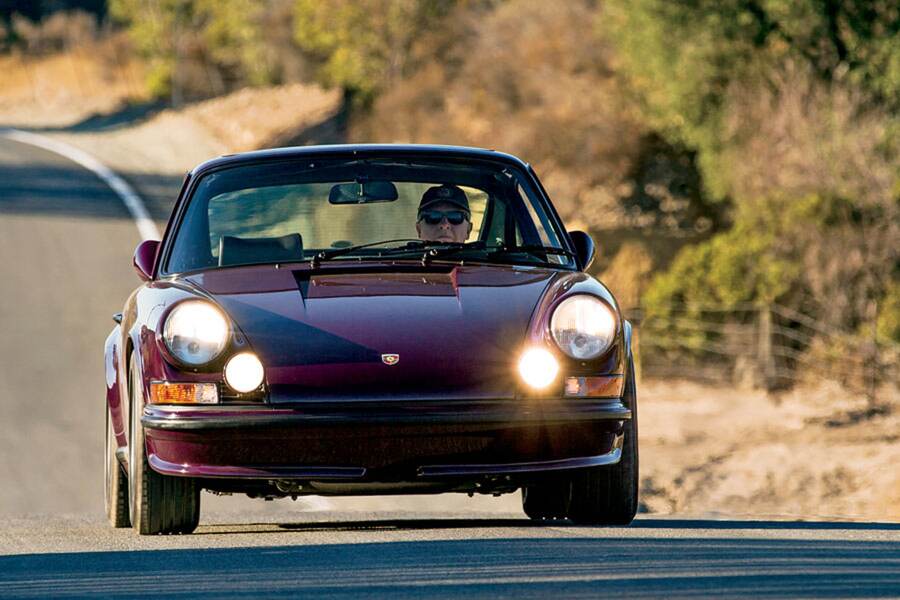 A month later, the “RS/T,” as it became known, was reassembled and lowered to a Cal-Look ride height. Unfortunately, Roger had an accident in his 911 two months later, when a driver pulled out in front of him on a slippery road. Roger vowed to fix his Porsche in time for the July 1985 PCA Porsche Parade concours in Costa Mesa, California.

After the car was repaired, that trip went beautifully. Roger even won a second-place trophy for his hard work. For the next five years, he drove his RS replica daily, making sure to wring its neck on every onramp. That hard use eventually led to a required top-end overhaul and some minor repainting. 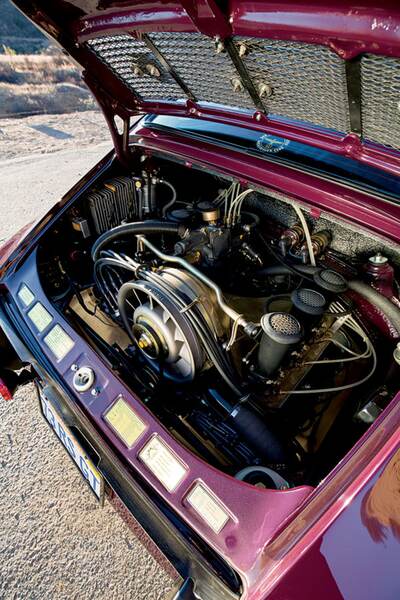 Another deadline loomed. This time everything needed to be completed in time for the 1990 Porsche Parade in Monterey, California. Roger wanted to show his car in the concours again. But by far the biggest reason for finishing in time was that Roger wanted to propose to a beautiful woman named Terrie at the event. She said yes.

For the next two decades, Roger led fast tours through California and organized the annual R Gruppe Treffens from 2003 to 2007. I witnessed his influence on the club as its purpose snapped into focus under his guidance.

Roger left his leading role in R Gruppe when he changed jobs from being the service manager at the Newport Beach Porsche dealership to providing customer service at Porsche Motorsport North America in Santa Ana, California. His welcoming manner and friendly expertise continued to touch hundreds of lives. Meanwhile, his Aubergine RS/T became a regular fixture at Cars and Coffee events in Irvine. 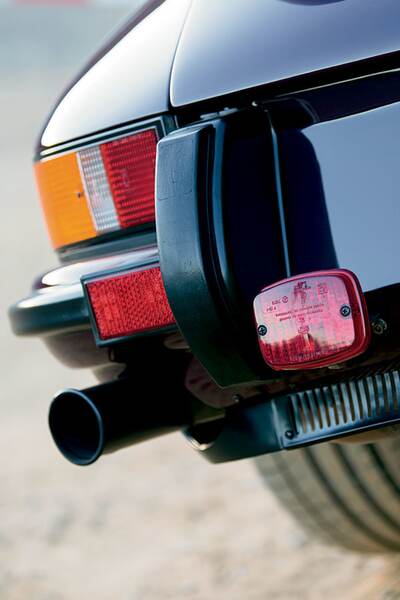 Then, on September 1, 2010, after countless outings and approximately 500 car shows, Roger’s 220,000-mile 911 sat alone in its garage. Terrie had noticed a change in her husband over the previous week. He was tired, having severe headaches and kept forgetting dates and peoples’ names. One night he opened a copy of Excellence and couldn’t understand a single word. “It might as well have been in Russian,” said Roger.

That day, he was taken to nearby Saddleback Memorial Hospital emergency room and diagnosed with Stage IV brain cancer, the worst kind—an aggressive glioblastoma. He was operated on and had a baseball-sized mass removed from the left side of his head the very next day. After the surgery, doctors said he had less that one year left to live. To make matters worse, Roger had just started a new job and didn’t have health insurance.

The early 911 community in Southern California went to work and raised over $50,000 for Roger within a month. The church he was a member of did the same. Amazingly, Roger’s neurosurgeon, Dr. Kim, waived his customary fee. 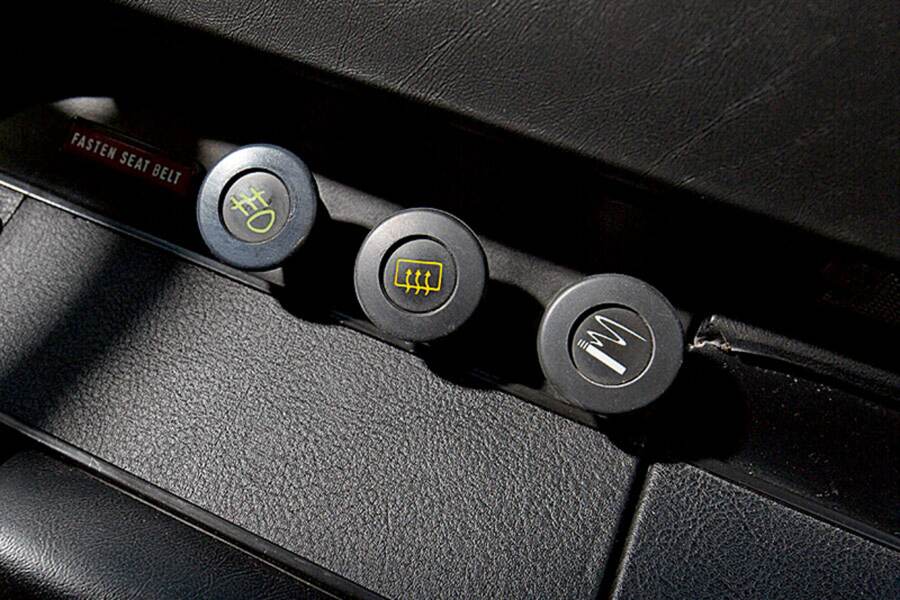 Radiation, chemotherapy, more brain surgery, CyberKnife radiosurgery and additional chemo and radiation followed. The treatment was anything but subtle. Somehow, Roger survived it all with dignity, uncomplaining and grateful for what time he had left.

He’d bravely faced challenges before. His DKP Karmann Ghia suffered no less than thirteen engine rebuilds and several accidents in the 1970s due to hard use. Mike remembers, “Roger was always a take charge, pedal to the metal kind of guy.”

It’s About the People 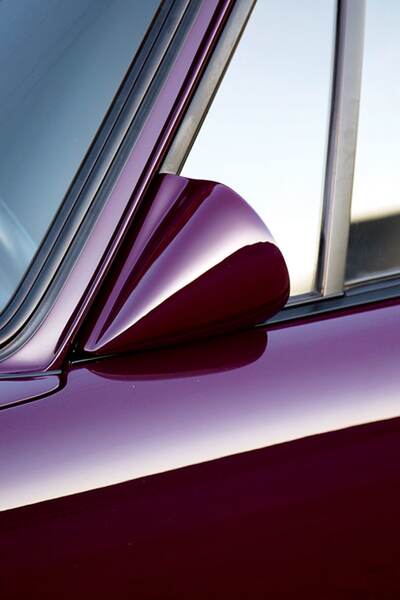 An organizer by nature, Roger had helped revitalize the DKP VW club when the first phase was winding down. Then, at the Bug-In 18 VW car show in 1977, Roger totaled his Karmann Ghia, crashing into a light pole while leaving an Orange County drag strip.

“Grago was loaded into an ambulance and driven to hospital,” says Keith Seume, his good friend from the UK. “While lying on the stretcher, all he could hear on either side of him was the roar from dual 48 IDA carburetors as fellow club members escorted the ambulance to Saddleback Hospital.”

While Roger was recuperating from serious injuries to his chest, face and arms, the DKP club members secretly bought Roger another 1962 Karmann Ghia. Everything that could be salvaged from the original car was reused. 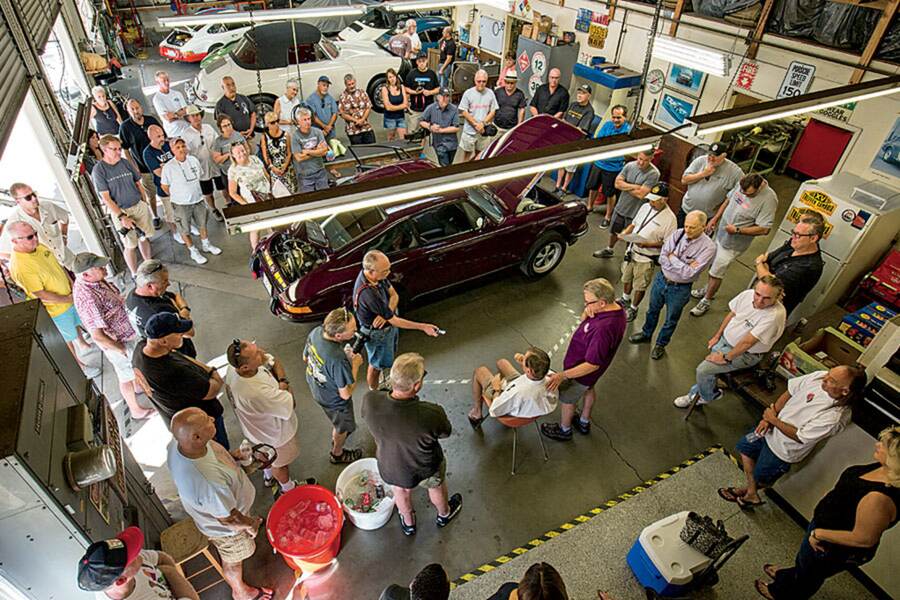 When Roger was presented with the rebuilt car in 1978, he was blown away. The perfectly finished silver-grey Ghia went on to win Best of Show at Bug-In 20. That club solidarity remained unparalleled until 2014. That’s when R Gruppe members decided to restore Roger’s Porsche 911 while he courageously battled brain cancer. Déjà vu.

“For almost 180,000 miles, Roger’s 911 motor was a 2.7-liter RS-spec MFI replica that had been in the car since 1984,” said engine builder Scott Hendry. “Roger basically used it up. The head studs were pulling out and causing major problems.” Hendry decided to build a 2.9-liter magnesium-case flat-six engine for the project.

John Esposito’s Porsche Repair in North Hollywood took the body down to bare metal, repaired some rust, repositioned the RS flares and applied a new coat of Aubergine paint. 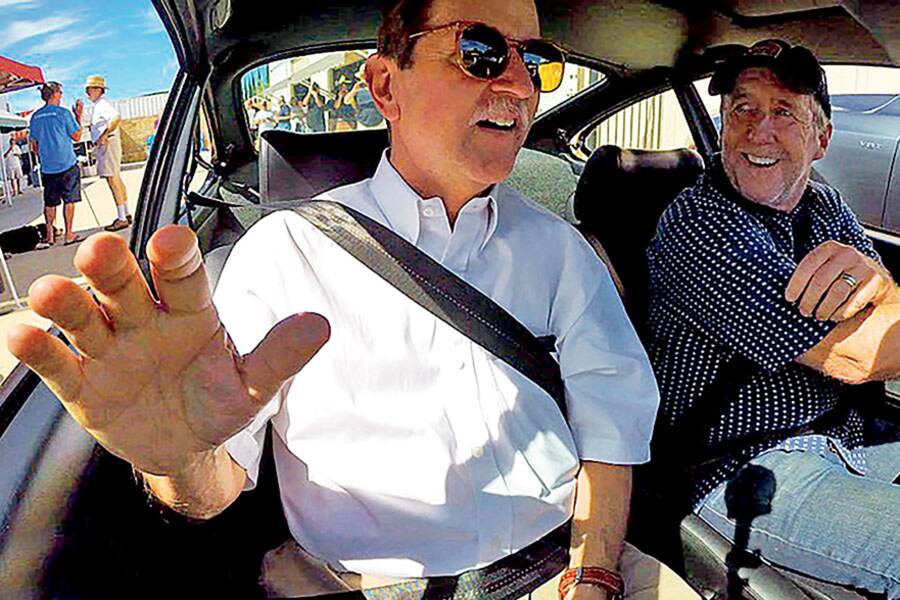 The rest of the Southern California Porsche community also rallied around Grago’s machine. George Boley and Ike Arriola did the engine’s machining, Dan Reese did the engine assembly with Hendry, Jeff Gamroth worked on the engine fiberglass, Mark Motshagen took care of the cooling fan and alternator housing, Chuck Moreland and Tony and Marco Gerace handled the suspension, Steve Alarcon did the alignment, Augustin Vidaurri redid the seats and George Balonian handled the rest of the interior. Vintage Porsche collector Dick Moran was instrumental in making everything happen.

“DKP built a car for him, and now R Gruppe has done the same thing,” says Terrie Grago. “It’s amazing how he seems to engender this kind of feeling. He is very giving, and I’m so proud to be his wife.”

Seume elaborates, “As I always say, the longer you spend in classic Porsche circles, the more you come to realize that this hobby of ours has very little to do with cars: It’s all about the people!” 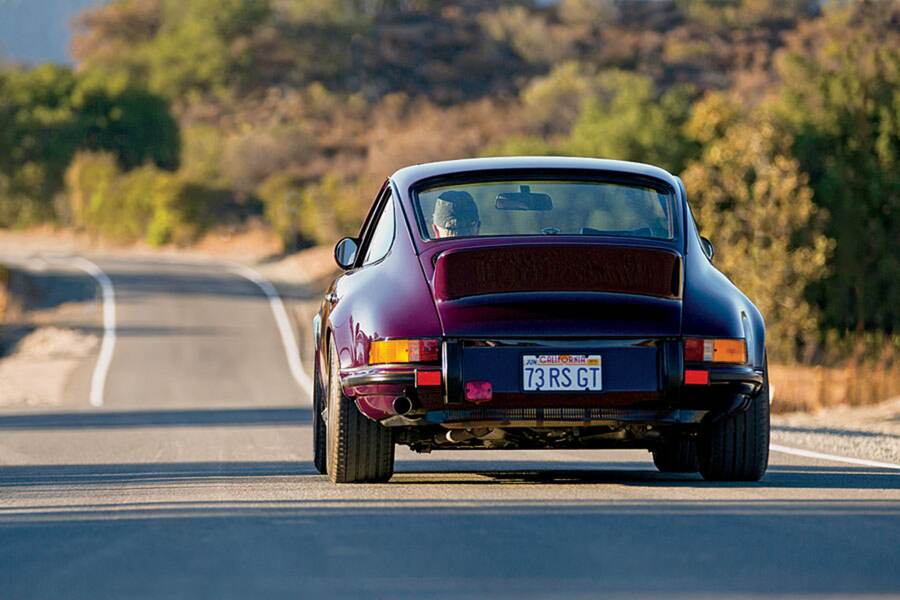 In 2011, the R Gruppe Treffen in Monterey was named in honor of Roger. And in 2012, he received the GT award, the club’s highest honor for an R Gruppe car.

When Roger’s “RS/GT” 911 restoration was completed in October 2014, a christening party took place at Hendry’s shop in Anaheim, California. Over 100 people came from far and wide, including several DKP members. Roger was there, looking like his old self, except for an eight-inch scar above his left ear. He was the center of attention, just like at his driver’s meeting before a tour. But instead of offering advice, he mostly listened, accepting the love of his friends.

Everyone watched as Porsche racer Jeff Zwart took Roger for one last ride in the shiny Aubergine 911. It now sported bigger, 930-spec brakes and the aforementioned 2.9-liter twin-plug engine developing 243 hp at 6,700 rpm. When they returned, Roger gave a big thumbs-up and Jeff enthused, “This car drives like new, and it sounds great!”

When I drove Roger’s ride the next day, it proved to be all that and more. It is truly one of the best early 911s I’ve ever experienced. Power is prodigious, steering is tight, the suspension is firm yet supple, and the exhaust note is transcendent. It’s one car I would love to get to know better in my own lifetime.

Our community lost one of its heroes last year. But solace can be taken in the outpouring of hundreds of social media posts like these: “There are special friends, and then there is Roger Grago. Although he is dearly missed, his memory lives on in the hearts of many, thanks to an equally special 1973 911. None of us will take our earthly possessions with us when we pass, but it’s good to know they made a difference in the lives of those we left behind.” 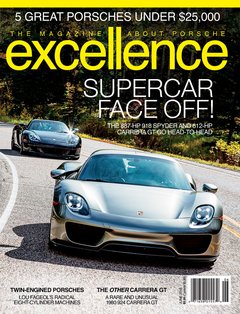