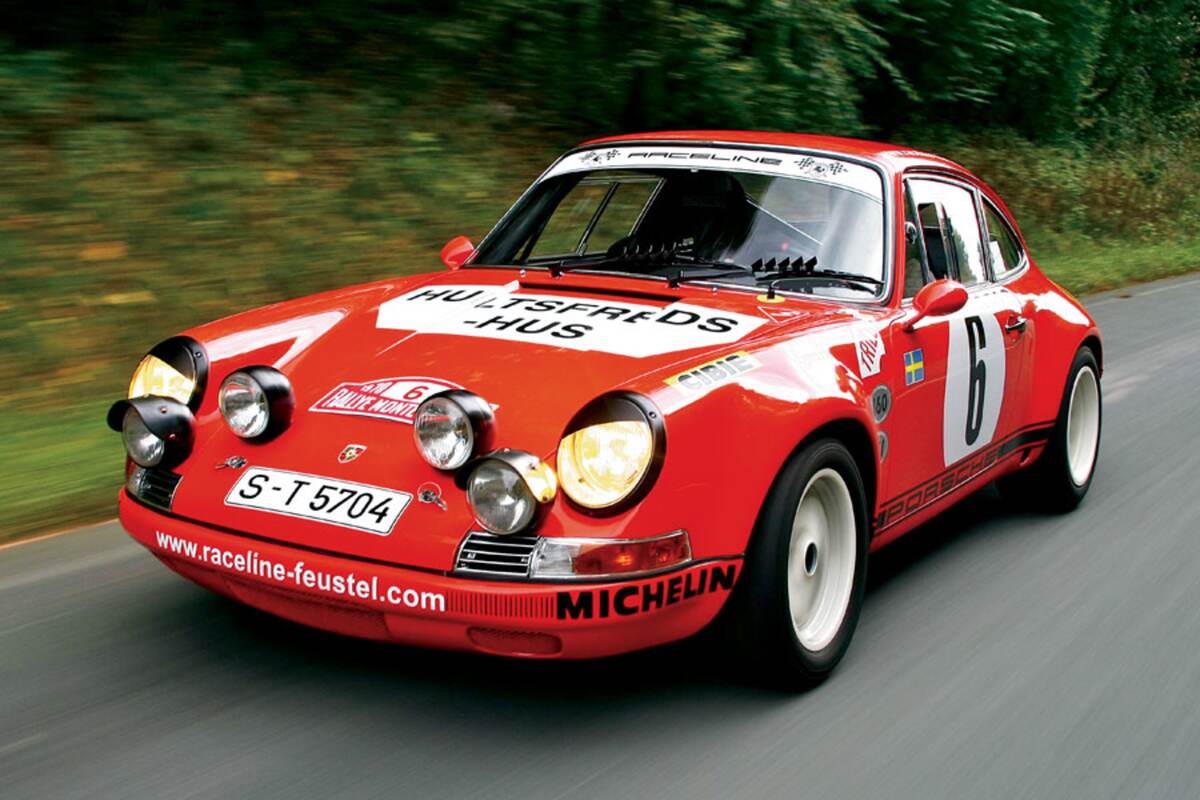 Note: Björn Waldegård passed away on August 29, 2014 after a lengthy battle with cancer. This is one of the final interviews he granted before his death.

Researching the history of a 44-year-old rally car is a pretty daunting task. The people who worked on the project are retired, and their memories have faded into the mists of time. This is always a problem with any competition car, unless its history was properly documented along the way. I was, however, surprised at the dearth of information on the 1970 Monte Carlo Rally winning 911S/T of 1979 World Rally Champion, Björn Waldegård, since this is such a significant car in the annals of both Porsche motorsport and rally lore in general.

The good news is that the original 1:1 scale version of this famous orange Porsche rally winner is in hale and hearty condition. Best of all, unlike many such valuable cars that are tucked up in museums or private collections, this 911S/T is regularly campaigned in European classic rally and hill climb events by its present owners, Karl-Heinz and Florian Feustel, of Raceline Feustel GmbH.

A classic Porsche restoration and race preparation firm, based near Cologne, Raceline Feustel acquired the car 19 years ago, and the father and son team are the first to admit that their knowledge of its prior history is pretty sketchy. 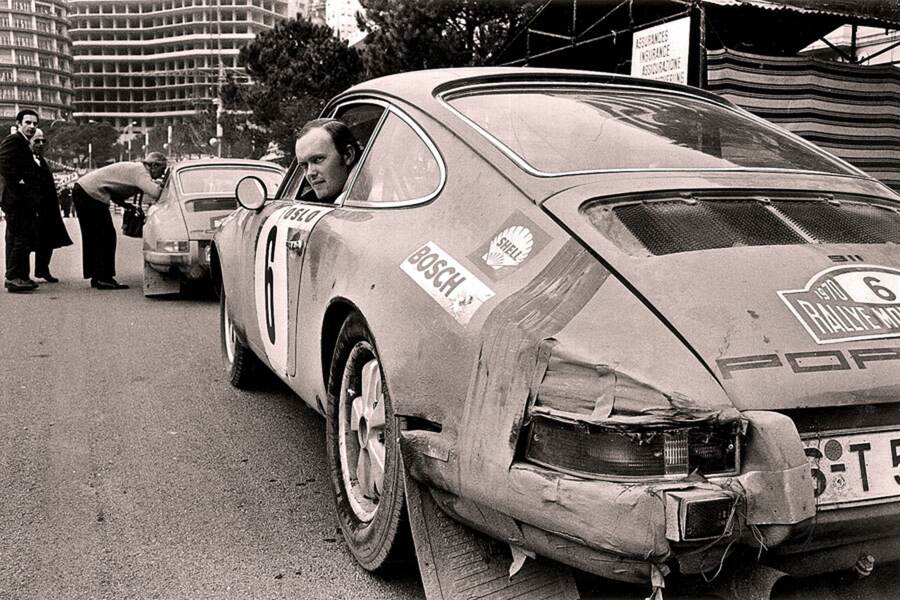 I was more surprised, however, to discover that little or no information on this very significant rally winning 911S/T exists in the Porsche Museum archives, save for brief mentions in a couple of period magazine stories that covered the rally event in general.

“We are always searching for material on historic race and rally cars,” explained Porsche Museum curator, Dieter Landenberger. “The engineers who built and maintained the works cars back then did not keep records of what they did, so proper documentation of an individual car and the modifications carried out during its competition career are virtually non-existent.”

The paper trail may have gone stone cold, but my next move to speak to Björn Waldegård warmed up very quickly. Through a mutual friend in Sweden, I was able to arrange a telephone interview with Björn, who told me about his experience with the Porsche team at the time, and what his 911S/T rally car was like to drive compared to its contemporaries. Our long chat filled in the fascinating human side of the story, and also gave me an insight into how Porsche’s racing department was run in those days. 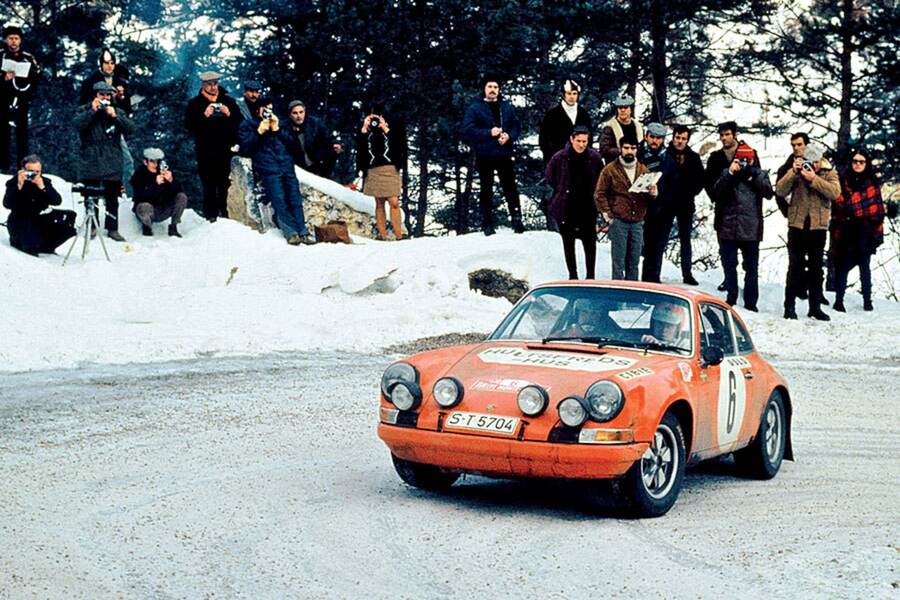 “I began my amateur rallying career with a VW Beetle, achieving good enough results to get me noticed by the Swedish VW importer, who then provided sponsorship,” Björn recalled. “In 1967, the Porsche 911 was homologated in Group 2, which meant we could then use this car for national level rallies.”

By happy coincidence, the Swedish VW importer was also the Porsche importer. To Björn’s great delight, he was given a 911 to contest in the Swedish Rally Championship.

“I used that car to win the Swedish Rally Championship in 1967 and ’68, but it was no secret that my ultimate objective and dream was to drive for the Porsche factory team,” continued Björn.

As he had hoped, his two Swedish Championship victories got him noticed, and Porsche’s Racing Director, Huschke von Hanstein, called his boss to say: “If Björn is interested, he can drive the third factory car in the Monte Carlo Rally. There is no money involved, just the drive.” 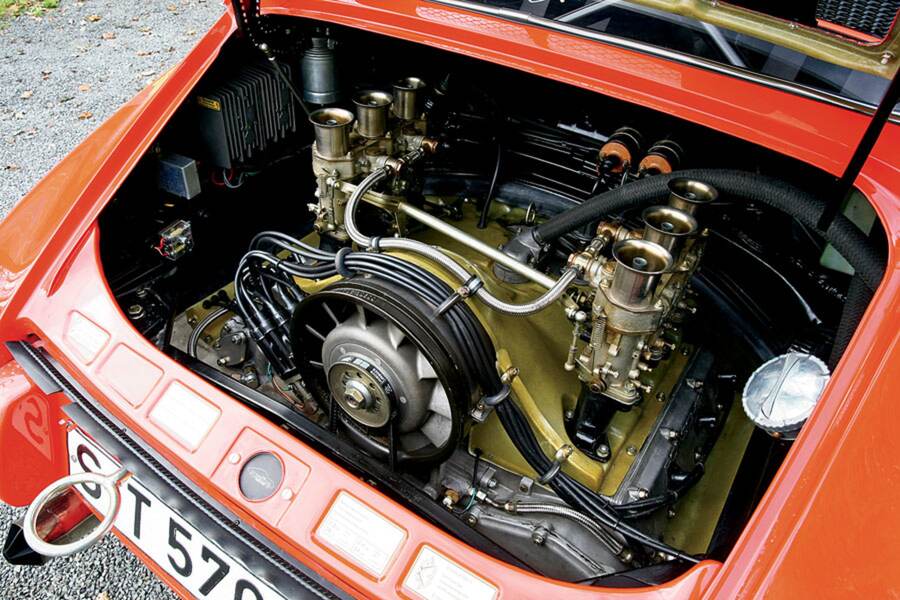 “I said yes like a shot, and promptly won the 1969 Monte Carlo Rally for Porsche with Lars Helmer as my navigator,” said Björn excitedly. “My life changed dramatically because of those three nights in the French Alps. Suddenly I was hot property in the rally world, and I rammed home the point by winning the 1969 Swedish Rally, and then repeating my Monte Carlo victory the following year. For me, those big wins were the true cornerstone of my almost 40-year-long career as a professional rally driver, the pinnacle of which was my 1979 World Championship title.”

Back in the early 1970s, rallying was still in its infancy, so there was not a lot of testing was done, even by the works teams. It was a case of the engineers trusting their instincts and experience to design a good car on the drawing board. Needless to say, this did not work all the time, and Björn’s 1970 Monte Carlo Rally 911S/T was delivered with too little ground clearance for the loose surface stages.

“Fortunately, because we started off in Scandinavia, we had to pass Stuttgart during the concentration run on the way to the South of France,” explained Björn. “This gave the racing department the chance to raise the car a few centimeters and reset the suspension geometry to suit. Set up to my liking, the car was very fast. We had a clean run at all the stages and we won the rally. The 911S/T was a relatively simple and very strong car and I never had a mechanical failure.”

In those days, a Porsche 911S was a dream car for any driver, let alone someone barely 26-years-old, as Björn was when he won the 1969 Monte Carlo Rally. He went straight from a VW Beetle to the 911, and thus had little experience of any rally car in between those two extremes. That was to come later. 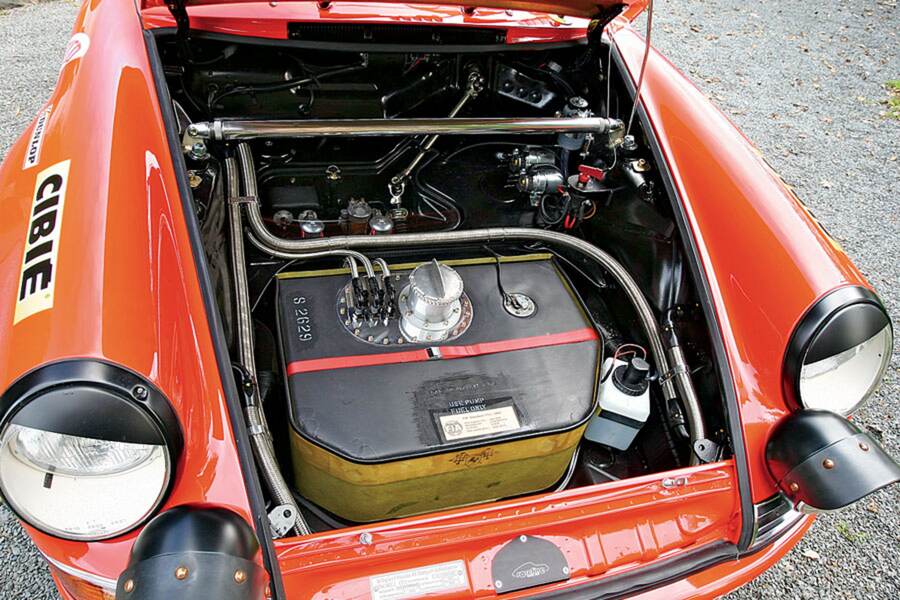 “In terms of driving technique, the Beetle and 911 are not dissimilar, as they are both rear-engined, only one is far more powerful,” Björn explained. “The Porsche does not forgive mistakes and needs a special technique to drive quickly because of its heavy engine at the rear and its power.”

Some drivers like understeer, while others prefer oversteer. The 911 can certainly get you into trouble very quickly if you don’t know what you are doing. It oversteers easily on loose surfaces, so you have to plan your driving accordingly, and then it is a very easy car to drive.

“You have to be very neat and precise, using small and smooth movements,” said Björn, describing his driving technique behind the wheel of a classic rally 911. “The steering wiggles in your hands, and you have to compensate at the wheel to keep the car going in a straight line on a bumpy surface.”

If you go into a downhill bend too fast, simple physics will see the back overtake the front. 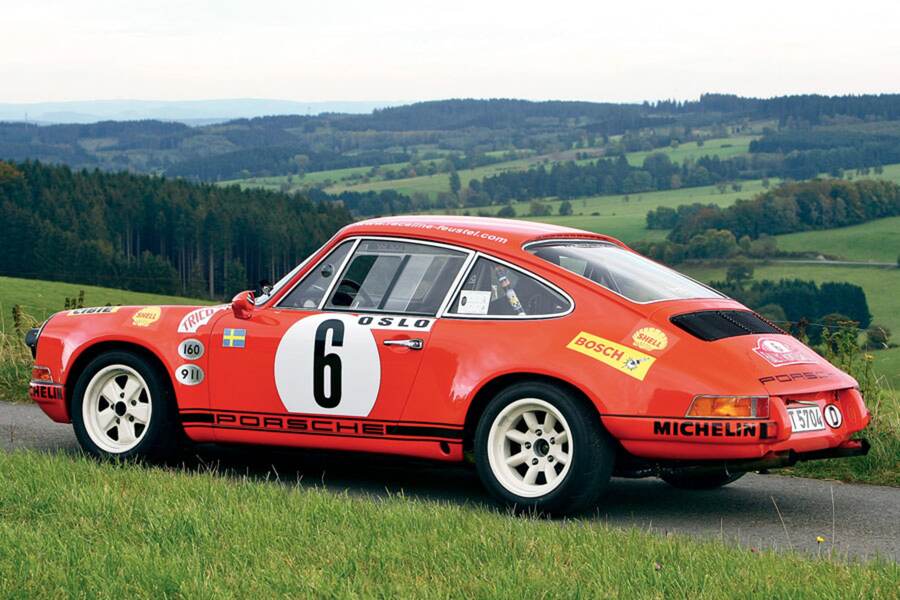 “I had a big accident in Corsica when I went into a hairpin too fast after not listening properly to a pace notes instruction,” said Björn. “We went over a bank and rolled into a gully. That accident was down to me, not the car!”

However, with its excellent power, traction and handling, the 911 is an extremely fast rally car. If you understand its foibles and respect them, you have a very good chance of beating the competition.

“Of course it is not just the car but also the driver,” Björn continued. “We all had a different driving technique, with Walter Röhrl being known for his straighter, more racetrack like lines, while I personally prefer more oversteer.”

While the 911 was Porsche’s original rally weapon of choice, the factory also experimented with a pair of mid-engined 914/6s in the 1971 Monte Carlo Rally. 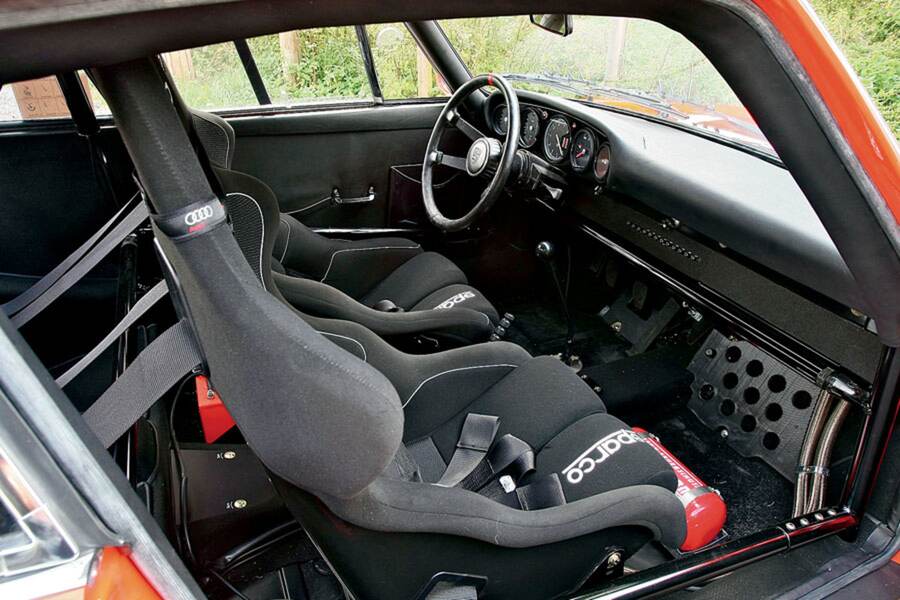 “The engineers were really enthusiastic about the cars 50-50 weight distribution, and they thought it would be as good on gravel as it was on tarmac,” said Björn.

In reality, the 914/6 was much more difficult to drive on loose surfaces than the 911. It was too well balanced to be a rally car, and while it was extremely fast if you could trust the road, it was very tricky in the wet and rotated faster than the 911 once drivers passed the limit.

“Sometimes you did not know if it was going to understeer or oversteer next,” Björn continued. “We finished third in the 1971 Monte Carlo Rally with the 914/6, but I make no bones about the fact that the 911 was a better rally car any day of the week.”

As the rear-engined VWs and Porsches constituted Björn’s only rally car experience at the time, it was a huge culture shock to step into the Ford Escort, and later the Toyota Celica. 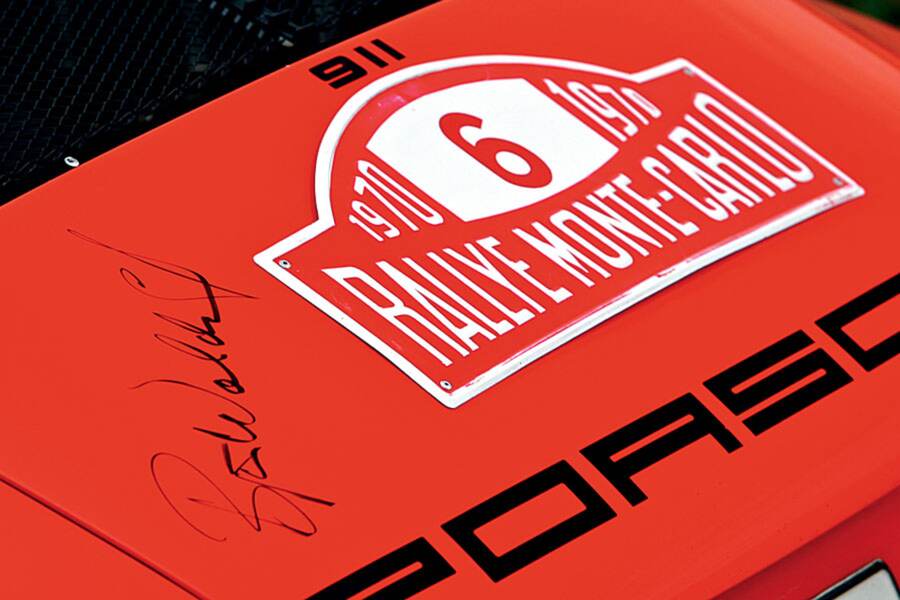 “It was then that I understood the Porsche 911 was not an easy car to master if you were used to a front-engine, rear-wheel drive car,” said Björn. “You could force the Escort into a bend on the wrong line and still come out more or less okay. But you could never do that with the 911. It was not a problem if you turned in at the correct speed, it was more about needing to control oversteer more carefully, because the potential to spin was so much greater.”

Björn was happy to drive the 911 again in more recent rally events with Francis Tuthill, “whose outfit is second to none,” said Björn, describing his post-retirement return to motorsport when he won the 2011 Classic Safari Rally, co-driven by his son, Mathias.

“You cannot compare the original cars with Tuthill’s 21st century rally 911s, which are vastly more sophisticated,” Björn said. “The handling has improved tremendously from the early days.” This is due to the Tuthill cars having modern brakes, tires and shock absorbers that gives drivers many more suspension set up possibilities.

“At the end of the day I am a bit sad that Porsche did so well in racing and rallying in the ’70s, but never returned to rallying,” said Björn through rose tinted glasses. “With its state-of-the-art all-wheel drive system, the new 911 Carrera 4 would be a car to beat today,” he said wistfully. “That said, the Tuthill 911 Classic Rally cars are a fantastic thrill for this pensioner to drive today,” Björn acknowledged. “I am just thankful that Porsche gave me my big chance all those years ago.” 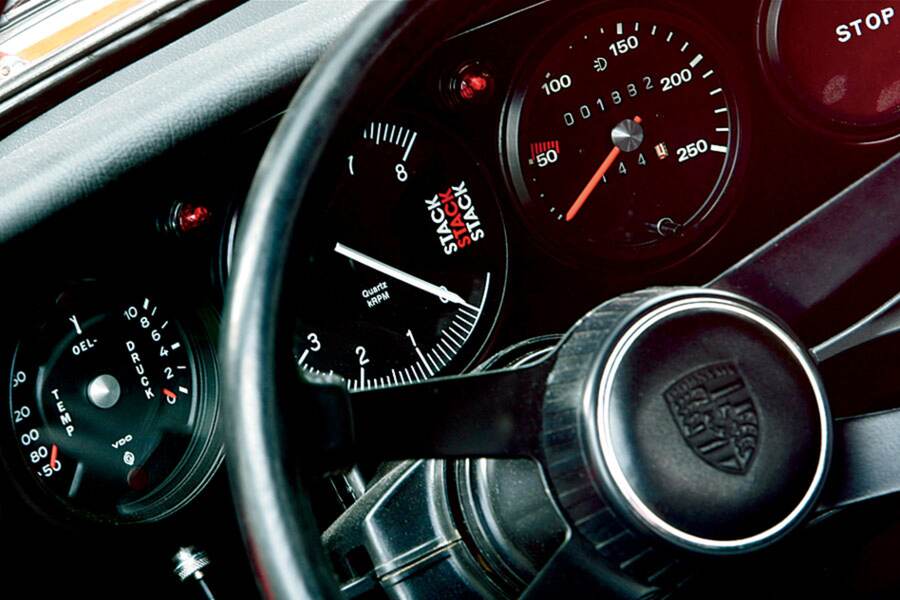 “We have owned this Monte Carlo Rally winning 911S, chassis number 911 030 0001, for about 19 years,” explained Karl-Heinz Feustel, affectionately known as Charly to his friends. “When I first got the car, I entered it in the Trofeo Baleares Rally in Mallorca. Two years later, Walter Röhrl won that rally with the car. But as we had a huge amount of work flowing through our company, the car stood idle after this and was only looked at again in 2012.”

Charly and his son thought this was too significant a car to be just sitting around, so they started a full-blown restoration with the aim of campaigning the car in historic events.

“We rebuilt the 2.3-liter engine to our own specs,” said Florian Feustel, “and it now has 249 hp, which is somewhere between the original factory rally and race specs.”

As anything can happen in competitive motorsport, the Feustels made the decision to remove and preserve irreplaceable original parts, such as the roll cage, seats, wiring harness, bumpers, doors, front and rear lids with replica parts made from original materials so that the originals would not be destroyed in case of an accident.

“The car now has a Raceline roll cage, a competition wiring harness, a larger oil cooler system, a safety fuel tank, uprated suspension and 7 and 9 × 15-inch wheels with 225/50 R15 and 270/45R15 tires,” said Karl. “We also digitally measured every fitting and fixture that was removed, so if we ever need to restore the car to how it was, everything will go back exactly where it came from.” 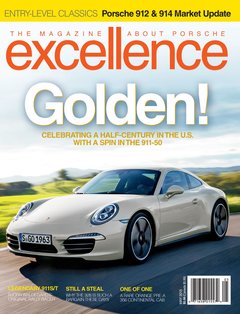