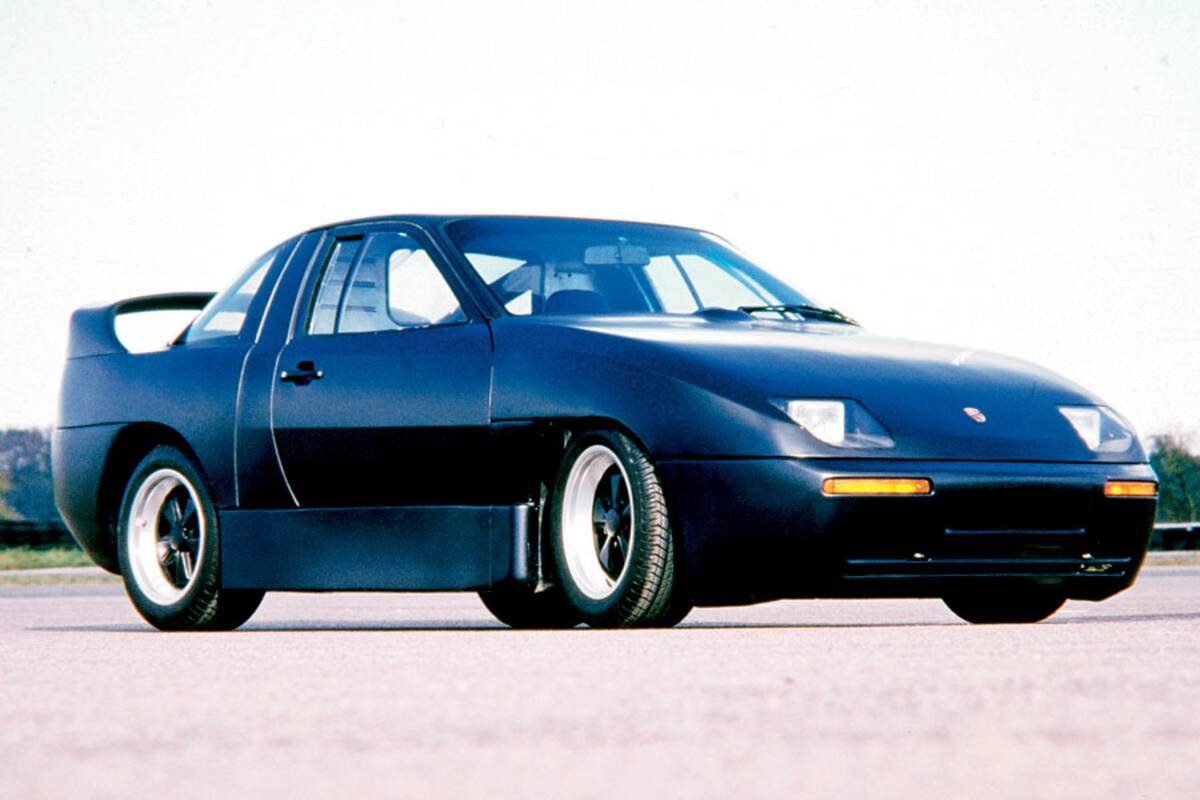 In the mid-1980s, a strange matte-black coupe was frequently spotted on Porsche’s Weissach test tracks and occasionally snapped by an opportunistic photographer. “What could it be?” wondered journalists. “Was it a completely new model? A possible 911 replacement?” It looked the part with its plunging nose and big tail-mounted wing.

In 1987, Porsche came clean. This was the Type 2696, also known as the PEP—standing for Porsche Experimental Prototype. Built by the Weissach engineers, the car was their tool for exploring advanced concepts of handling and suspension.

“It’s a rolling test stand,” explained Peter Schutz, Porsche’s chief at the time. “It is a car with which we can do some preliminary feasibility evaluations of concepts. It gives us the opportunity to evaluate different drive systems, because it is literally a Tinkertoy.” This was a reference to a kids’ toy construction set invented in Chicago in 1914. I well remember making all kinds of interesting structures with my Tinkertoy sticks and circular hubs. “It’s ugly as sin,” said Schutz. “It looks like a camel or something, instead of a horse, because we pay very little attention to its appearance.”

“The idea was to create an adjustable car,” said engineer Helmut Flegl, whose research department built the PEP. “At one stage it looked like a 944 with a different rear end and sounded like a 911.” Its core was an aluminum monocoque center section, which extended from the front toeboard back to the area behind the two seats. In the rear of the monocoque were a 5.3-gallon rubber fuel cell—it wasn’t expected to go far from Weissach—and a 3.2-gallon oil reservoir.

Fronting the greenhouse was a 944 windshield. The 944 also provided the roof and B-pillars. Doors were adapted from the 944 but fabricated in fiberglass, which was used for the entire exterior skin. The steering column, with its attached instruments, was borrowed from the 928.

Bolted to the front and rear of the PEP’s central monocoque were welded-steel tubular structures that carried different suspension systems that Porsche wanted to try out. The attachments were made in such a way that the torsional stiffness of the complete vehicle could be varied to try the effects of different structures on handling behavior. 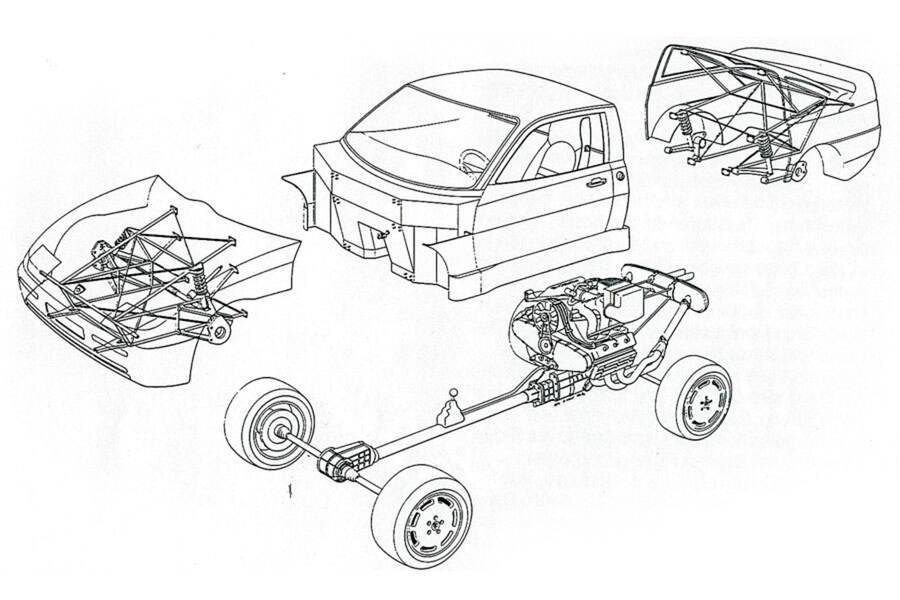 Bolting weights to the tubular frames could change the PEP’s weight distribution and polar moment of inertia. “You could make changes fast,” said Volker Berkefeld, who worked with the PEP, “and move masses around very well.” Wheelbase length could be changed as well. To accommodate this, the driveshaft and its surrounding tube were telescopic.

The PEP’s basic drivetrain powered all four wheels with its 911 engine mounted in the rear. To reduce mass overhang at the rear, however, the flat six was mounted above the transaxle, driving it through a train of gears. The drivetrain was laid out so that the PEP could be front-driven, rear-driven or four-wheel-drive with different front/rear torque balances. The purpose of the wing at the rear of its snub-nosed bodywork was to permit the car’s aerodynamics to be balanced to resemble that of production models.

Porsche made bold claims for its Type 2696: “In the future it will no longer be necessary to build costly prototypes or heavily modified production cars in the concept phase of a newly-developed vehicle,” it stated. “In advance, its handling can already be evaluated and optimized with the Porsche Experimental Prototype.”

The reality was less rosy.

“It was too crude,” said Flegl. “It felt very much like a prototype. You couldn’t get the feeling of a real car. To decide whether a concept was good or not was impossible.” Berkefeld seconded this negative assessment of the PEP. “Its acoustics, vibration and so forth made it not representative of a real car. The idea was good, but it’s better to build the components into an actual car. The driving feeling is then much better.”

“When you try to present a new idea internally,” said Berkefeld, “it’s best to present it in a very good form—not too noisy, for example. Otherwise, people don’t like it!” He added that later developments leapfrogged the PEP idea in any case: “Basic suspension issues can now be resolved with computers.” Engineering chief Horst Marchart confirmed this: “We have become more scientific in the way we work. Maybe this is not always as exciting as it used to be, but the final result is really impressive.” 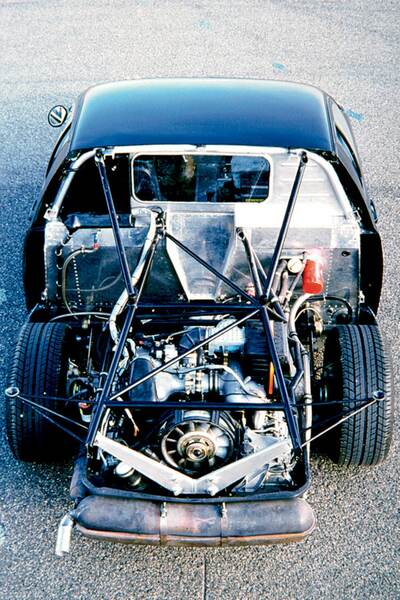 I can’t help thinking that the research findings may have been skewed by the high position of the engine. This was less than ideal, raising the car’s center of gravity and placing a substantial mass high at the rear. It was, in retrospect, an odd way to build a test car that was intended to show the best way forward.

Interestingly, the Porsche initiative wasn’t all that different from the Grand Prix Lotus that Colin Chapman created for the 1976 season. His Type 77 had the following features, said Chapman:

“We can alter the front track very easily by moving the whole of the suspension system out on the very simple sub-frame. It is also very easy to change the rear track. In fact, this is achieved simply by swapping over the rear wheels, which varies the track by four inches.”

“We can alter the wheelbase by up to ten inches,” Chapman continued, “because there are five inches of adjustment at both the front and the rear, and so we can have either a long- or a short-wheelbase car. At the same time, depending upon how it is set up, it is possible to change the location of the centre of gravity, a fairly major adjustment which normally cannot easily be effected once any particular design of racing car exists.”

“The basic concept of the Lotus 77,” concluded Colin Chapman, “apart from trying to produce a light, strong and efficient racing car, is to attempt to effect quite large geometry changes very easily. This is not to say that we will go to a circuit and immediately start altering the car, although that could be done quickly. The idea is that if we are going to a circuit where we know that a long-wheelbase car would probably perform best, we will set it up in the workshop as a long-wheelbase car. If we felt that a wide track would be beneficial for a particular circuit, then we will set up the car in that form. Then, if we found we were mistaken, we could very easily and very quickly change it.”

Chapman first fielded his 77 on the wildly sinuous Interlagos track in Brazil. To suit it, the team’s 77s were built to minimum dimensions of both track and wheelbase. Lotus driver Mario Andretti found that his racer, much like the PEP, “handles like a go-kart. I just can’t get any precision with it.” Andretti persevered to win the season’s wet final race in Japan driving a much-improved 77. In fact, the 77 was the car that served as a test bed for the 78, which introduced ground-effect downforce to Formula 1 racing.

I don’t know whether the PEP has survived. When I updated my Porsche history, I was allowed access to the vast underground warehouse off a back street in a Stuttgart industrial estate that housed the Porsche Museum’s overflow. I saw a lot there that was interesting, including the flat-16 engines built for Can-Am racing and the prototypes of the Type 989 four-door Porsche. But I didn’t see the PEP. Exiguous as it was, it may well have gone directly to scrap—just like my Tinkertoys. 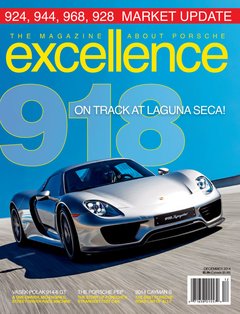