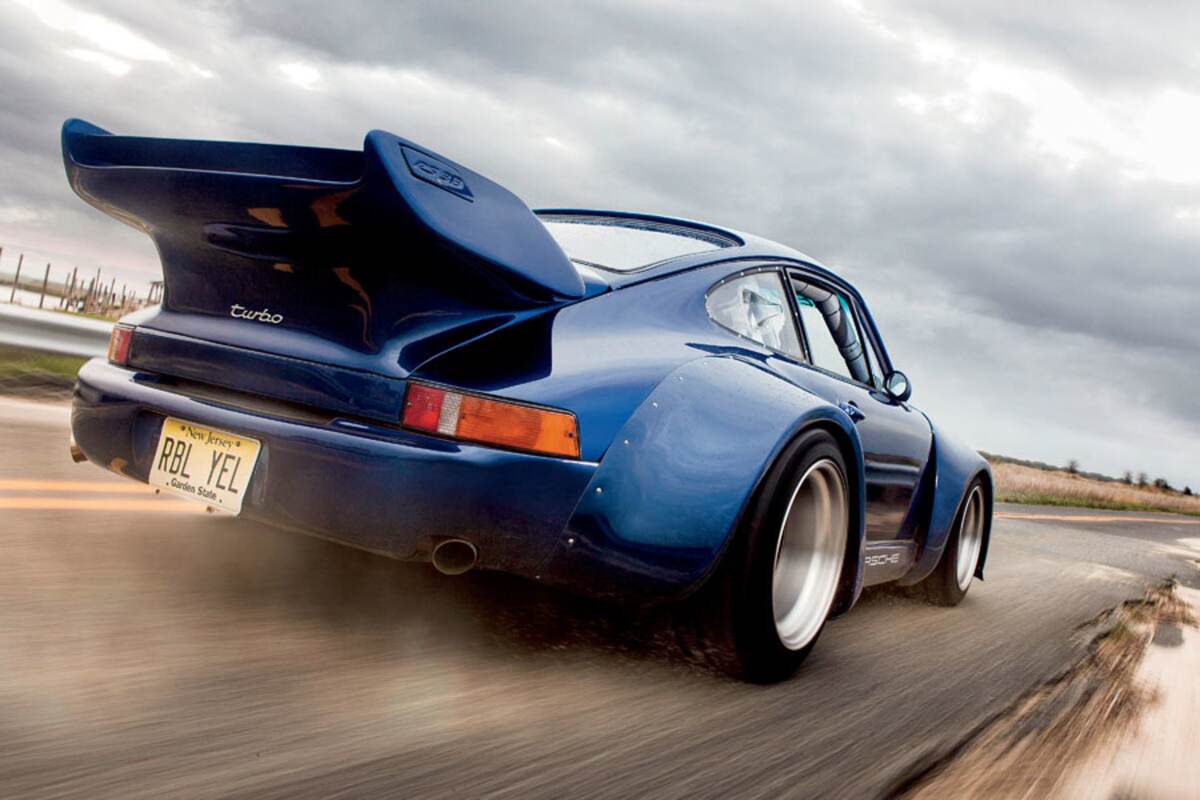 The job of a photographer is to find a fitting location for the subject. Being from South Carolina and shooting in New Jersey, I had no idea what to expect. After hours of searching Google Maps, I came across what seemed to be a pleasant beachfront property off the Nantuxent Cove.

Upon my arrival, the skies were a sinister shade of gray, the roads hadn’t seen a paver in years, and in the distance I spotted a sign that read: “Bay Point Rod and Gun Club: Private Properties – No Trespassing, Violators Will Be Prosecuted.” I felt about as welcome as Foghorn Leghorn at Colonel Sanders’ family reunion.

The atmosphere was tense, the weather gloomy and the car’s owner hadn’t made an appearance yet. Our previous encounters by e-mail were spotty, to say the least. A friend of a friend of a friend had recommended the car, and the only way to contact the owner was via e-mail. Cell phones probably do not exist in his world. Maybe he’s trying to hold on to the ’80s as long as possible? 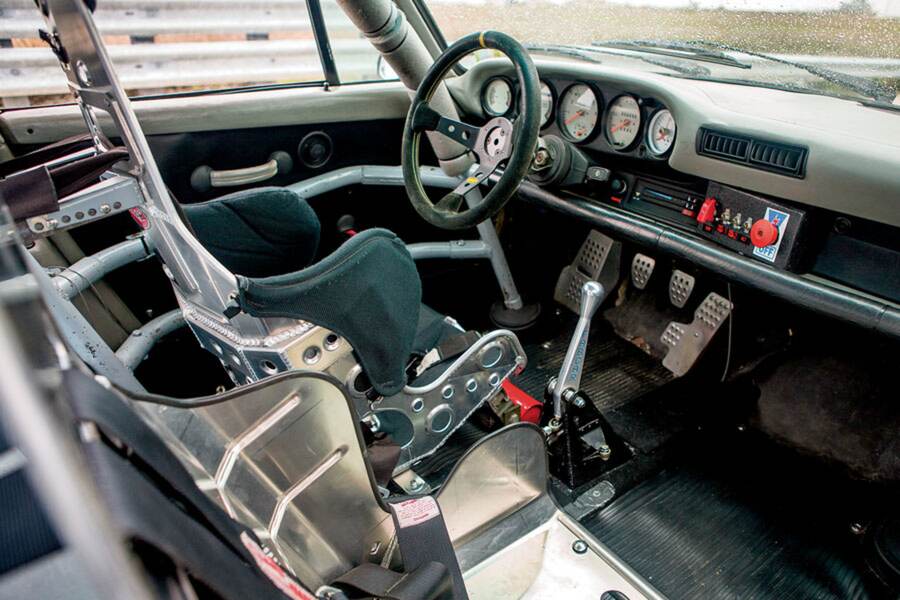 Surrounded by rods, guns, sand, dark clouds, and the deafening silence of a horror movie, I hear the faint but deep growl of a turbo flat-six clearly audible in the distance. Talk about picking the right location for a daily-driven 935-inspired slantnose! I swear, the clouds got darker as the 930 barreled closer. The entrance would have compelled Mad Max to give a standing ovation.

Mick Cote wedges himself out of the tight rollcage, donning a trucker hat that covers his messy bed hair, five-day stubble, cargo pants, and a long john camo-printed shirt. Just like the car, the owner is equally as mysterious.

“Whaddya think?” asks Mick. It didn’t take but a quick buzz around the car to see this car was something unique: super-wide flares, equally wide 335 tires, a stripped interior, and paint that shows the patina of regular use. Don’t expect to get your best shave using the hood of this beast as a mirror. “You don’t use Q-tips to detail your car, but I don’t care!” I replied. This one Porsche has more personality than 1,000,000 Toyota Priuses. This is what happens when an iconic Porsche gets into the hands of a rebel. 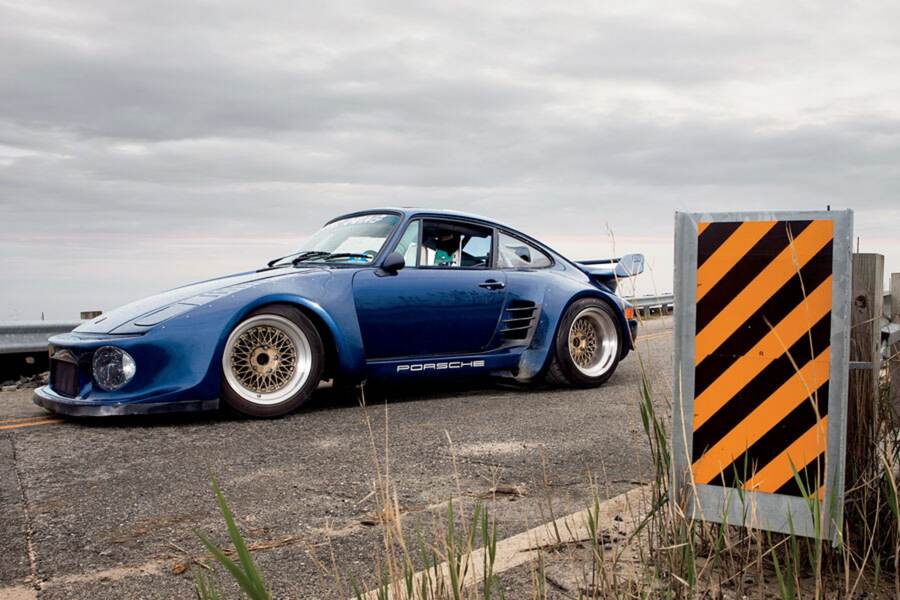 The relationship between Cote and his 1983 930 started in April 2008, when he purchased it in Virginia. Getting your hands on a 1983 “Sonderwunschprogramm” (special order program) 930 slantnose would mean you’re one of 35 lucky owners. Fortunately for die-hard purists, this is a conversion.

Initially, the stock 3.3-liter needed a new turbo, which was upgraded to a K275 unit. A month later, a cracked front splitter was replaced with a 993 front bumper from Better Bodies and an extended DP rear deck lid and wing was also added. Then, a rear bumper was replaced to accommodate the new Fabspeed exhaust system. At this point, Mick quickly found out how slippery the aftermarket slope can be.

That slope went from a modest blue diamond to a double black diamond when his comfortable stock leather seats were replaced with a pair of Sparco Chrono seats. This was a pivotal point, as his car was clearly morphing into a track-ready street car. Naturally, a five-point safety harness was next. Unnaturally, the carpet and rear seats were removed to make way for the “anti-wife” Autopower roll cage. “Money well spent!” Mick exclaims in hindsight. After an OMP steering wheel with a Smart Racing quick release was installed, as well as a Wevo 930 shifter, the car was presentable for its first Driver’s Education track day event at New Jersey Motorsports Park. 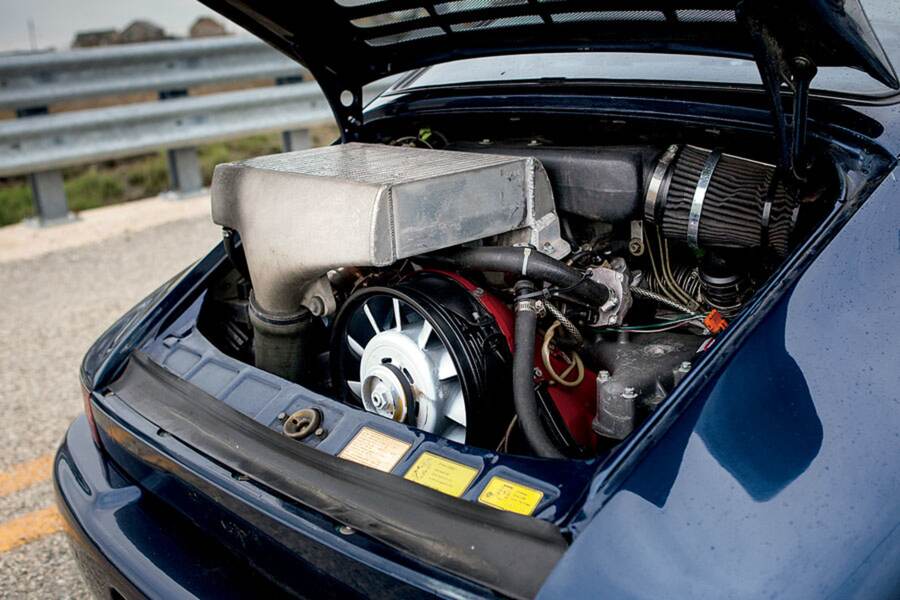 “I wish I could have taken a picture of my instructor’s face when he saw the car—with a student claiming to have never been to the track.” The instructor was further dumbfounded when he was informed that the 930 is a daily driver. After a few laps around a track, Cote was hooked.

Mick then did some more modifications. He split and widened the rear RUF Speedline wheels to 12 inches and put Hoosier slicks on all four corners. Yes, slicks on a daily driven street car. Then, a completely new chapter began.

Fate knocked on Mick’s door one night while he was browsing 935s on YouTube and eBay simultaneously. Only an hour away from him was someone selling a set of 934 flares. But wait, what’s this? That someone also had a set of original three-piece 17×10 and 17×15 BBS mesh wheels conveniently peeking out from the corner of his garage, too. Like a pooch eating dry dog food and smelling a big, bloody piece of steak, Mick abandoned the flares he initially wanted and rushed to the shiny golden wheels that arguably define BBS. A deal was made and the destiny of the Flachbau became centered around the massive racing wheels. 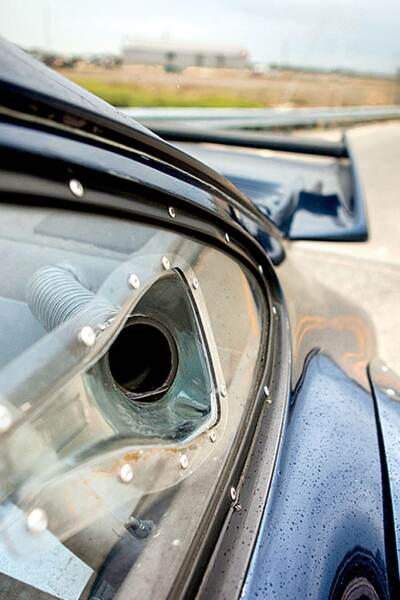 “I built a model of a 935 when I was 16 years old and always dreamed of owning a car like that,” Mick said. “I could have bought a 935 kit from AIR or GT Racing, but there are certain aspects of those kits that I didn’t like.” Fortunately for Cote, he previously worked with fiberglass, repairing boats and glassing roofs and decks. It’s a medium in which he was completely comfortable.

A patient and understanding neighbor allowed Mick to turn his garage into a temporary body shop where Cote played the role of Dr. Frankenstein. First, he taped the rear fenders with blue painter’s tape and glued blocks of foam to the car. Then he sanded and shaped the foam into a flare that would cover the 17×15 inch wheels. The tricky part was, after molding one side to his liking, he had to make the opposite side match perfectly. “This was extremely challenging, as there are compound curves which are impossible to measure,” he said. Once Mick was happy with the shape, he proceeded to cover the foam with multiple layers of fiberglass resin. After the flares hardened, he popped them off the car, foam and all.

This was the point of no return. The paddling onto wild rapids. The step off the 200-foot ledge. The ripping of the tag off a new mattress. Up until this point, Mick had done nothing to the car that couldn’t be undone. After pacing around the tail of his slantnose, Mick finally worked up the courage and cut into his 930’s original rear fender. 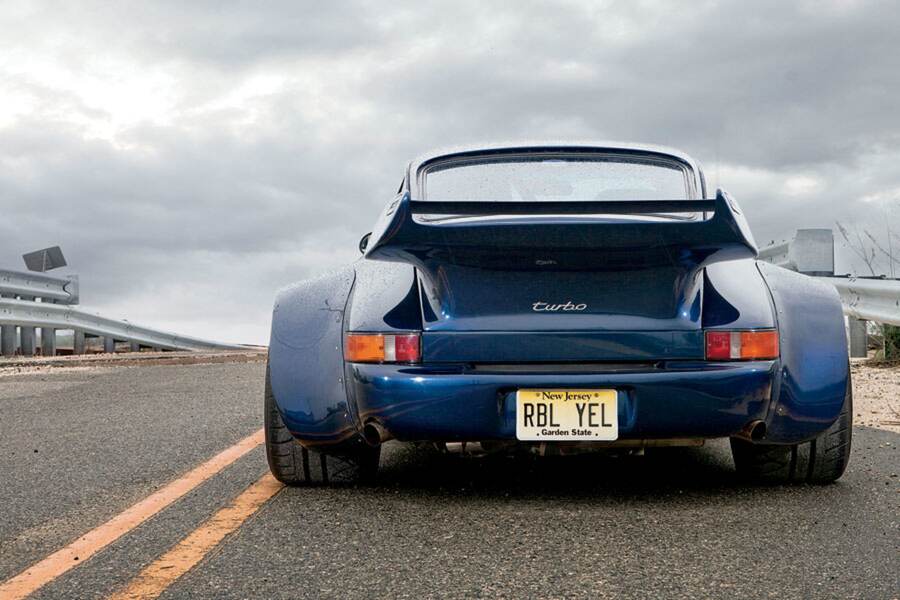 Once the factory 930 was stripped of its broad shoulders, the moment of truth arrived for the custom-molded rear fenders. The fit was far better than expected, but yielded one small problem: The stock front fenders looked vastly disproportionate. At the second point of no return, Mick didn’t hesitate. He started sawing off more metal, then molded his own fiberglass front fenders and blended them to the body with a 935 front clip from Better Bodies. The results are actually quite stunning, considering this was all custom-fabricated in a neighbor’s garage. Mick then removed the glass side quarter windows and installed Lexan windows with NACA ducts on each side to allow fresh air through the 930’s firewall and into a pair of K&N air filters.

The slippery slope was now a vertical line. Kirkey bare aluminum seats were installed and the keyed ignition switch was removed in favor of a switch box with ignition, alternator, front and rear fuel pump and main battery shut off. The rear seats were replaced with custom fabricated sheet metal. For daily driving, the interior is about as comfortable as a cross-country flight in the economy-class lavatory.

Only ludicrously wide summer or track tires wrap the BBS wheels. The suspension is held together by 23mm front, and 31mm rear Elephant Racing torsion bars paired with monoballs and urethane bushings. Bilstein shocks were revalved to match the torsion bars. TRG adjustable front and rear anti-roll bars and rear spring plates with adjustable camber keep this Porsche somewhat connected to the road. 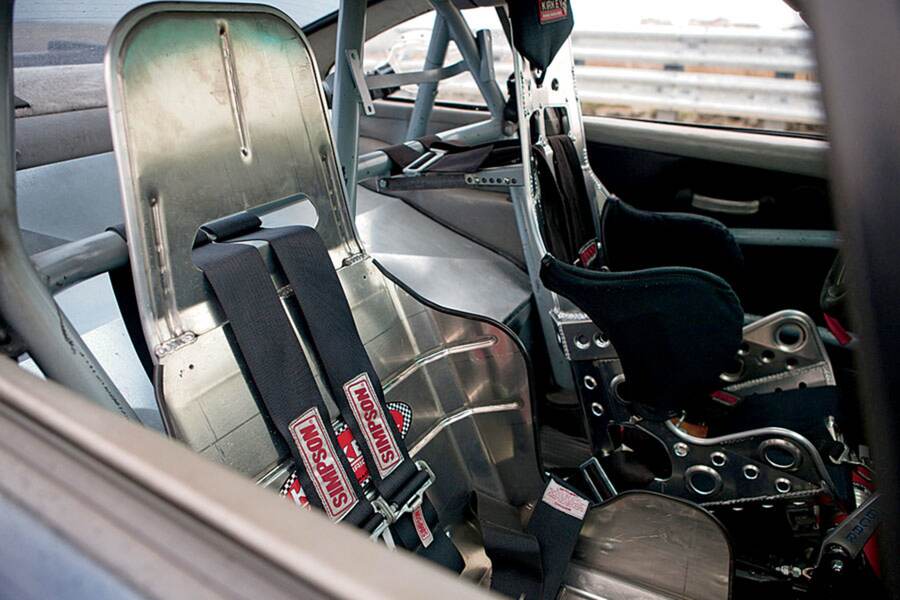 I say somewhat because, while driving the slantnose under a dark New Jersey cloud, the heavens opened up and poured. Not a lot of precipitation, but enough to activate the wipers. There should be a warning label next to the wiper controllers, and it should be in the chemical element symbol of Hg, because driving this thing in the rain is like trying to hold mercury in your hands.

The toll of daily driving forced Mick to rebuild the stock 3.3-liter flat-six, trusted to Mike Bavaro of Bodymotion. The turbo was upgraded to a K27/29 from RarelyL8, and a Hooligan exhaust system from the same company was also installed. The turbo behind your ears feels like being in the front row of a 1983 Billy Idol concert. A slight concert intermission was due in part to a close-ratio four-gear transmission, matted to a Guard Transmission LSD, Spec Stage 3 clutch pressure plate, and lightweight flywheel.

Thanks to the bare bones interior, jungle gym rollcage and rock-hard suspension, Mick has chronic back aches. However, he also has the pain-numbing pleasure of driving around in a striking, one of a kind machine. Owning a beautiful, unrestored Porsche from the golden era of 911s is one thing. Having the guts to cut one up and making it into the car you’ve dreamed of since adolescence is quite another. 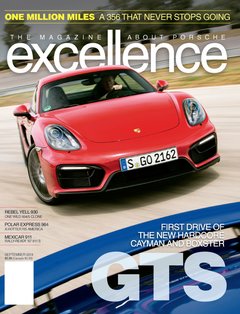