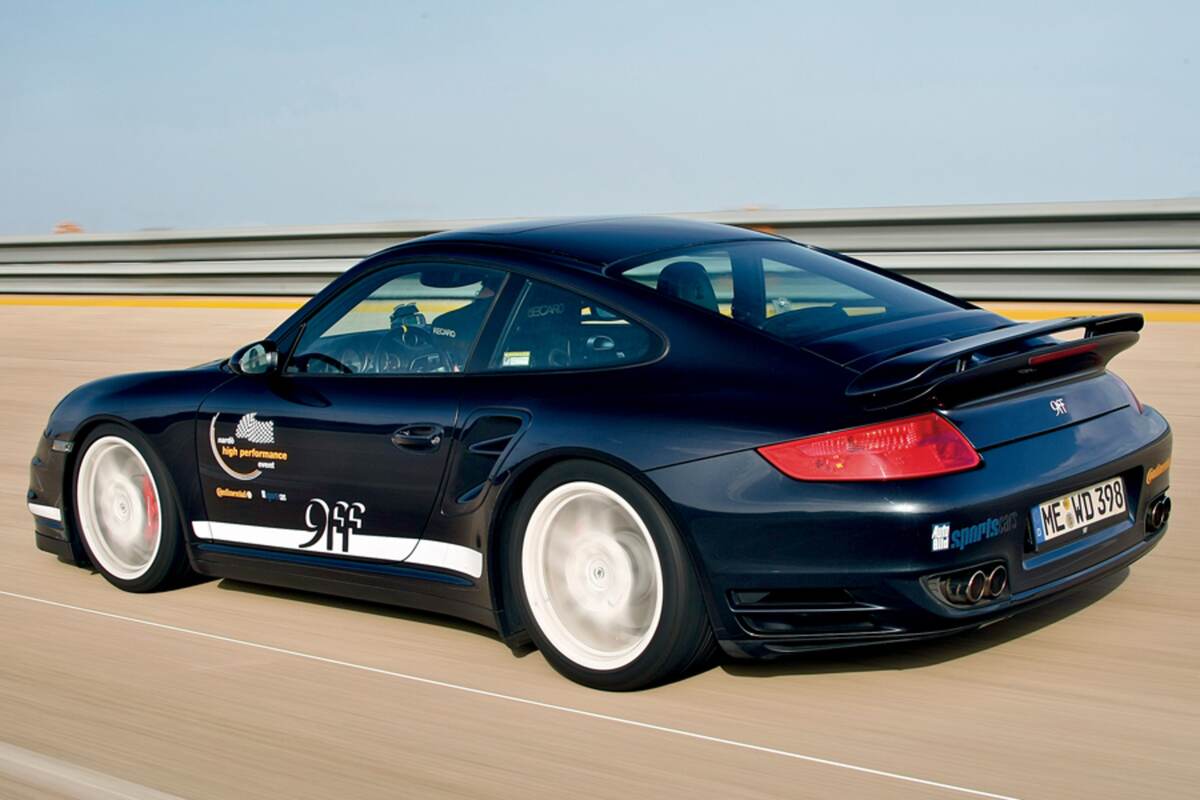 So why do a bunch of tuners bring their cars and crews to Nardó Technical Center every two years for a high-speed shootout? Easy: credibility and publicity. However, good press doesn’t come cheaply. The tuners rack up considerable expense, not just from participation in the event itself but also from the preparation needed to ensure the cars are as mechanically perfect as possible.

A good result here means a lot to both the participants and their customers, especially when the story appears in the few car magazines around the world that are highly regarded by the speed demons who build and buy these cars. And with the very experienced Nardó staff and a small group of invited journalists acting as third-party monitors, everyone is satisfied that the numbers achieved are both accurate and bona fide.

The top speeds achieved here help inform the owners and prospective buyers of these road-legal conversions that they can run at speed safely and reliably on the German autobahn. And in other countries, for owners who are denied the the luxury of unrestricted roads, it is an assurance that their car really will do what it says on the tin. 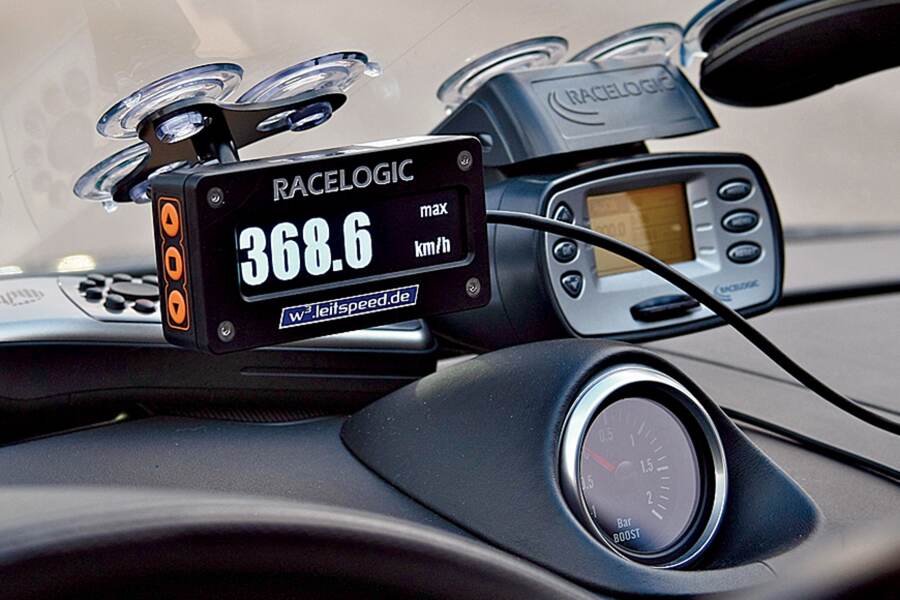 The full tuner line-up at the 2013 event: AC Schnitzer, Edo, GAD, Gemballa, G-Power, GSC, HGP, Klasen, MTM, Novidem, SKN, Techart, TH Automobile, and 9ff. With a total of 10,400 horsepower (around 7,650 kW) and running on high-tech Continental tires, the 16-vehicle field recorded five new fastest runs and saw almost all of the sports cars top 300 km/h (186 mph). Using Conti SportContact 5 P tires, Swiss tuner Novidem recorded a speed of 331 km/h (205.68 mph) and set a new benchmark for the fastest Nissan GT-R. Only a fraction behind at 330 km/h (205.05 mph) was the 550-hp (404 kW) Golf 3.6 Biturbo entered by HGP from Ohmden on Conti SportContact Vmax tires, which secured the record for the fastest Golf. Meanwhile, the smallest car in the field, an Opel Corsa run by Klasen Motors from Oberhausen, also boasting 550 hp and running on Conti SportContact Vmax tires, recorded a fabulous speed of 309 km/h (192.00) mph) – making this 1,259 kilo lightweight the fastest Corsa of all time. The record for the fastest diesel went to MTM with a 410-hp (302 kW) Audi A8 Biturbo. This high-speed sedan clocked exactly 300 km/h (186 mph) on Nardó’s concrete track on Conti SportContact 5 P tires. The “slowest” vehicle in the high-powered line-up was a

580-hp (425 kW) VW T5 Camper that posted a speed of 270 km/h (167.77 mph) on high-tech tires from the Conti SportContact family—and that was without Berlin-based tuner TH Automobile even bothering to remove the fitted kitchen!

Porsches are top all-around performers right out of the box and so are a natural favorite for aftermarket tuning. And of all the German Porsche tuners, 9ff has been the most consistent winner of the top-speed shootout at Nardó over recent years. The firm’s Jan Fatthauer has an enviable reputation for making Porsche flat-six engines deliver humongous power, borne out by results at Nardó that included the year his legendary 1,120-hp GT9 just about scorched the tarmac as it blasted past at over 408 km/h (254 mph). 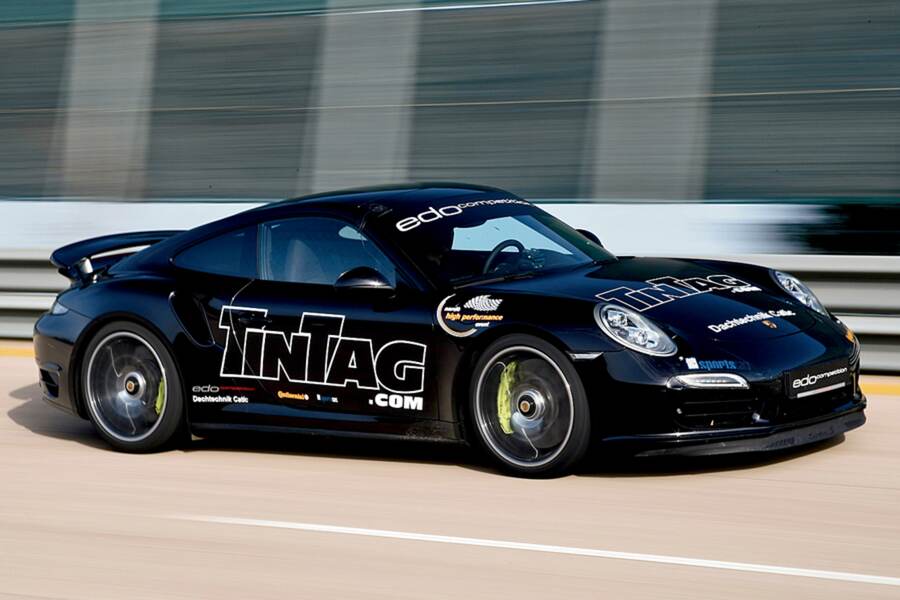 However, the tuning industry was rocked late last summer when rumors abounded of the demise of both 9ff and SpeedArt due to financial woes. Because of this unfortunate news, we were really surprised—and quite happy—to see that Jan and two of his mechanics turned up for the 2013 event with a fairly stock-looking 997 Turbo.

“Our GT9 supercar nearly finished us, as we had put a huge amount of resources into developing the car and ordering parts,” Jan explained. “We had seven cars on order, five from our U.S. dealer, when the financial crisis hit in 2008 and everything stopped dead.”

Fortunately Jan was able to restructure the company and bury the debt along with 9ff Fahrzeugtechnik. Every other conversion his team offered is still viable and continues under the name 9ff Engineering GmbH, which commenced operations on November 1, 2013. 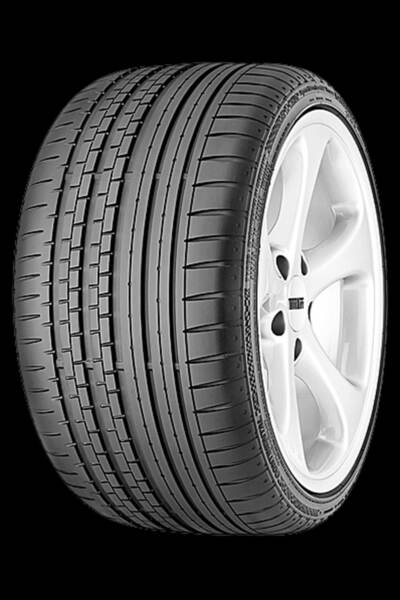 The first-generation 997 Turbo tweaked by the 9ff crew and brought to the party was actually in a relatively mild state of tune—only 820hp.

“The great thing about this conversion is the torque,” Jan explained. “You have 850 Nm (626.9 lb-ft) between 4000 and 7000 rpm, which gives flexibility like a huge rubber band. This is the first time we have done a conversion of this power without any internal modifications, so it is attractively priced and has become our best-selling conversion in recent months. I thought we should bring it to Nardó to show both our existing and would-be clients just how fast it is.” 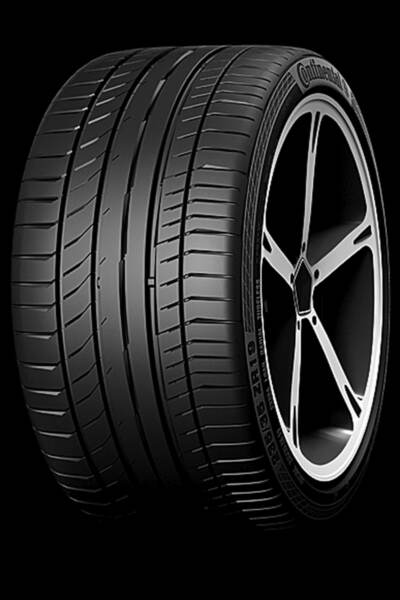 “This car showed 847 hp on the dyno, but our official spec sheet says 820 hp,” said Jan. “This conservative figure means we can be very sure that every car we convert will have at least this power.”

“Entry-level” product it may be, but thanks to its strong power and torque and a 12-percent taller sixth gear ratio, the 9ff Turbo absolutely blitzed everything else at the event.

The timing gear showed an impressive 368.6 km/h (229.03 mph) on its first run late in the afternoon of day one, and a very consistent 368.7 km/h (229.1 mph) on its second run on the morning of day two. This speed set the event benchmark, and by the time the curtain came down at lunch time on the second day, no one had topped it. 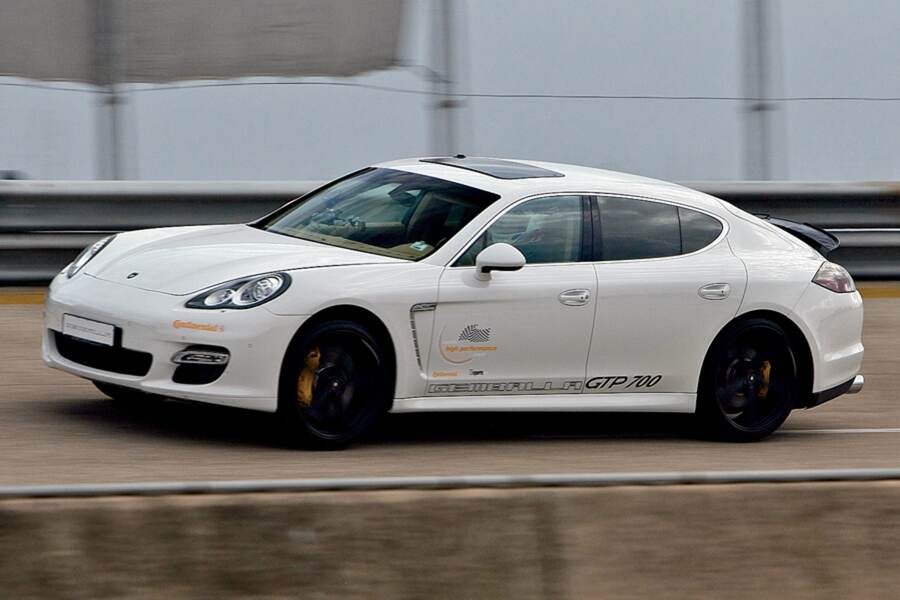 Two of the most impressive performances from cars that appeared close to standard came from modified Porsches. EDO Competition brought along a stock-looking 991 Turbo S, on which EDO’s owner, former BPR race mechanic Edo Karabegovic, only had time to perform a very quick Stage One conversion with exhaust and ECU. This bumps power from 560 to 600 hp, with 780 Nm (575.3 lb-ft) of torque, 30 Nm (22 lb-ft) more than the standard car on overboost.

Porsche claims a top speed of 318 km/h (197.6 mph) for the Turbo S, and the EDO car clocked a consistent 326.7 km/h (203 mph) on both runs, the only car at the event to be bang on the nail twice. It ran on the new Conti Force Contact track-day rubber introduced earlier this year. 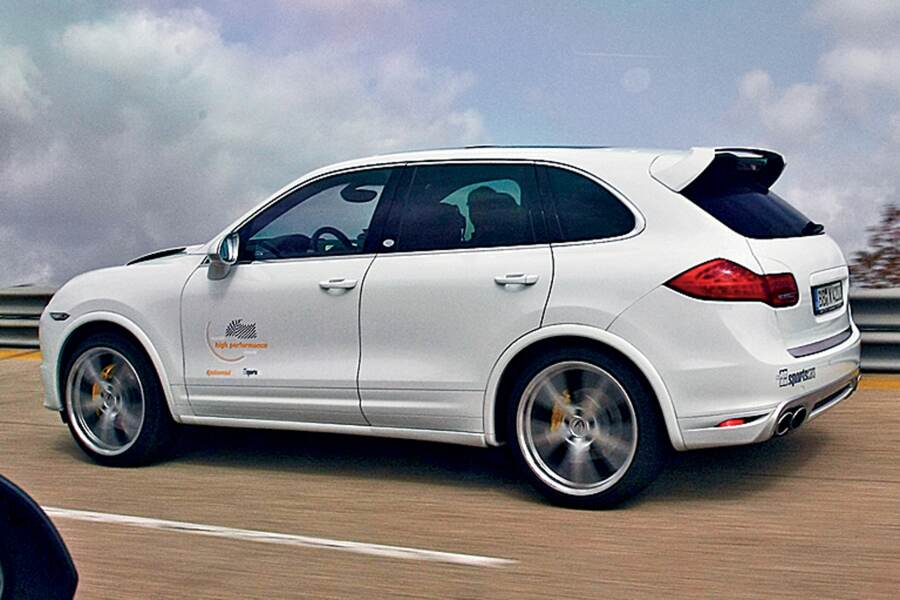 While Gemballa’s Stage One conversion produces 550 hp, the GTP700 conversion includes modified turbochargers, a high-efficiency intercooler system and other changes to give the Panamera Turbo’s V8 a boost to 700 hp and 950 Nm (685.9 lb-ft) of torque.

The fact that this fully street-legal car exceeded Gemballa’s claimed 335 km/h Vmax despite the drag from the big 22-in. wheels and the scrubbing on the banking, was doubly impressive. (Nardó’s banking is designed so that there is no lateral force up to 240 km/h. However, over that speed the onset of lateral g adds to the stress on the suspension, wheels and tires.)

While TechArt is best known for its wild 911 Turbo and GT2-based GT Street creations, they do sell an awful lot of Cayenne-based conversions. As the Cayenne Diesel is such a big seller in Europe, TechArt decided to bring along a Cayenne Diesel S to prove how fast a big oil-burner can be. 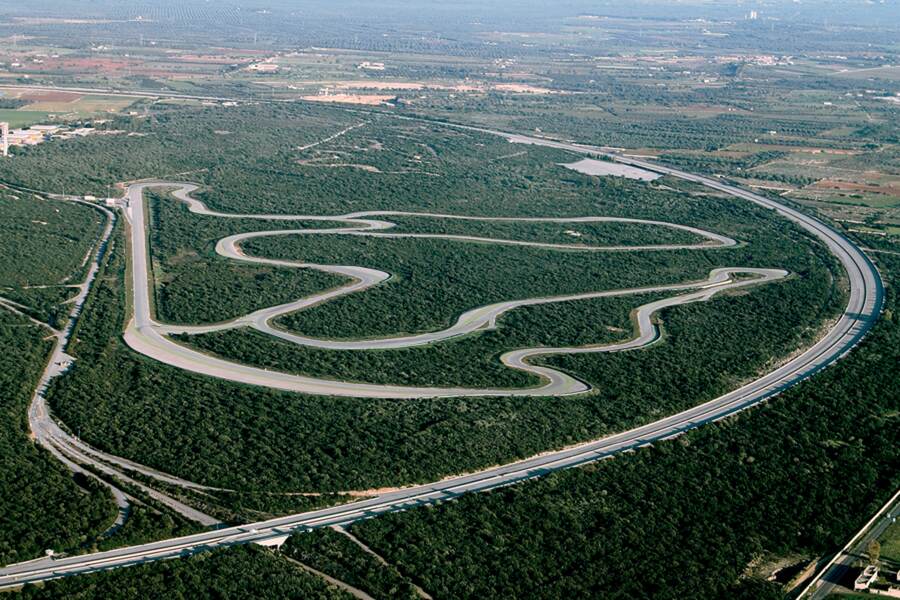 All the tuners provided full specifications for their cars, and one of the interesting results of the event was how close the cars got to their claimed top speeds despite tire scrub on the banking.

For a car capable of 300 km/h (186 mph), you can normally factor in around 10 km/h (6.2 mph) for tire scrub. The tuners had all established their top speed claims based on runs on a flat autobahn, so the fact that many of the cars came very close to their claimed top speeds on the banking was all the more creditable.

A handful of the faster cars at this event were running on Continental Sport Contact Vmax tires, which are officially rated to 360 km/h. The others wore the Sport Contact 5P or Force Contact trackday rubber.

On relatively light cars like the Porsche 911, such speeds are not an issue, but when you are talking about tons of Cayenne, that kind of velocity puts a serious strain on any tire. Thus, the 22-in. wheels of the TechArt Cayenne were shod in 275/35ZR22s with a variant of the Vmax tire called Conti Cross Contact LX Sport, designed for heavy, high-performance SUVs like this one.

Conti says its ultra-high-speed tires have a specially designed structure and tread pattern that delivers high levels of stability at speed while breaking up resonances. The Continental Sport Contact Vmax holds the Guinness Book of Records mark for the fastest road-legal production tire, and there are very few places left on the planet where you can explore its outer limits. Nardó is one 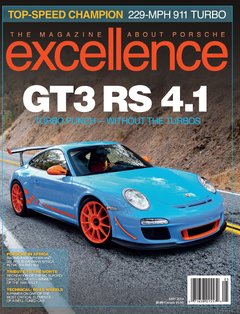