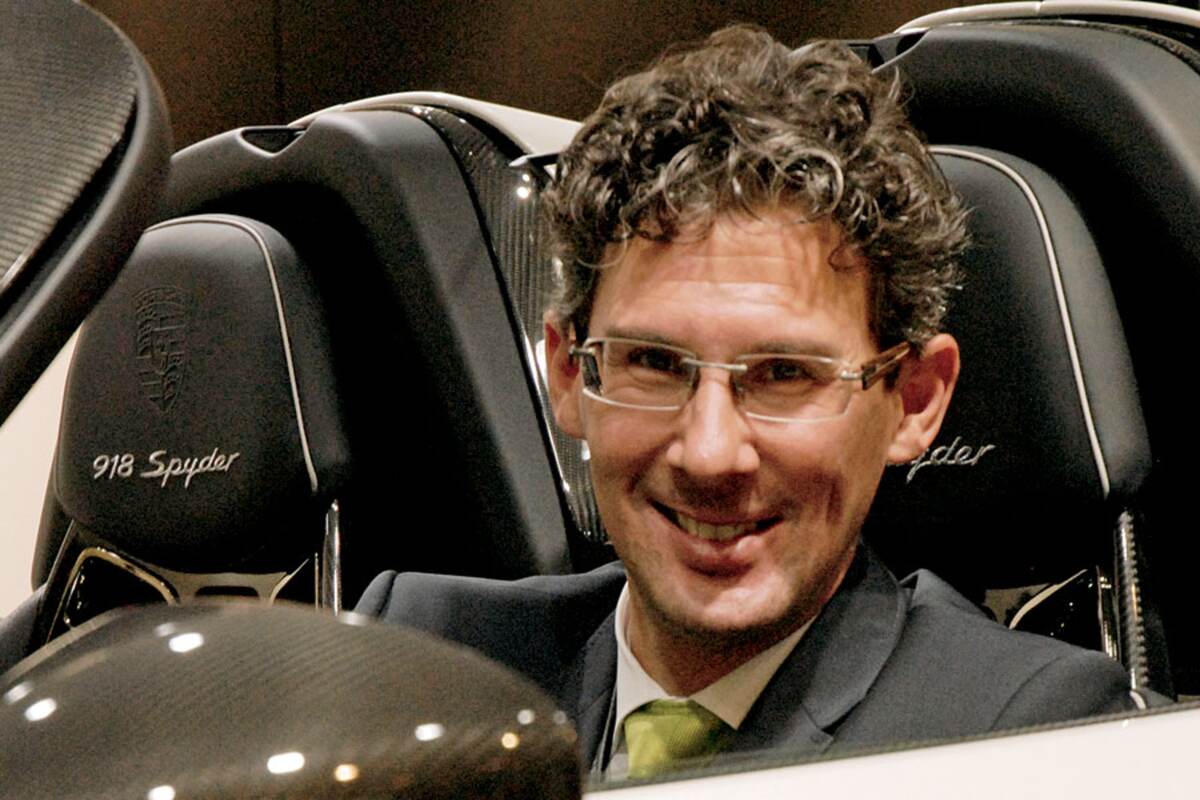 Excellence: The 918 represents the pinnacle of Porsche technology right now. How will that transfer to more accessible Porsche models?

It has already trickled down, as the Panamera SE Hybrid is also on the market as a plug-in hybrid. Those projects walked along together. The 918 definitely had more engineering freedom and was our interpretation of a hybrid for a sports car, which was so far not solved.

What we learned on the electric motors and the integration of the hybrid drivetrain and the advantages of a hybrid drivetrain in a sports car, it will come down. On the sports car side it will not come down that fast; it will come on the front-engine models like Panamera and Cayenne. It will be faster. Sports cars, especially 911, it’s a challenge for the packaging, but for sure next generation we will have a very close look at a hybrid.

Excellence: Certainly one of the challenges must have been making all of these separate drive components behave as one “team.” Do you feel you’ve succeeded in making the 918 not just fast, which we now know it certainly is, but also dynamically pure as a Porsche?

Excellence: How do you make that happen with so much electronic technology? How do you keep it pure like that?

Dr. Walliser: It has a lot to do with, let me say, setting very general targets for the engineers working on it, so they have a clear orientation where to go. If the targets are too detailed, we lose the direction. So we said, on the driving modes we have a mode for the guys concentrating on the fuel consumption, another one for the guys on the Nürburgring, so everybody can work with their directions. And we have experienced people who have a certain feeling for how a Porsche should behave.

Excellence: What other developments would you consider major challenges?

Dr. Walliser: Number one, it’s a completely new car. Just the sheer number of new parts…besides some nuts and bolts, everything is really new: new engine, almost new gearbox, hybrid drivetrain, the battery, the chassis, the monocoque. This was a challenge in just three years. Integration of this hybrid drivetrain, having a high-voltage system, you have to always be sure that it’s safe. At the end of the day it’s really integration, that all systems work together. That was the major challenge. To give you an idea, just to simply stop the car—brake, and it stops—you need the four-wheel management, you need the ESP, you need the I-booster, the new braking system, you need the gearbox, you need the engine and the two electric modules. You have to record the sources of torque and the downshift, just to make the car stop. And sometimes you get a result and say, “Hey guys, you may get one shot a week [to improve it] and now we have to work step by step and make it smooth and good.”

Sometimes over the development, week by week, we’d detect things in the car, how they work, and we’d just understand how it’s supposed to end. It was a challenge, but if you have an experienced team like we have you will always find the solution.

Excellence: What was the easiest part of the process?

Dr. Walliser: Design. That sounds funny, but we had established the [design] concept for the project, and we felt our real challenge was to bring it out as fast as possible. We made decisions very fast, with a very direct connection among the staff. We’d discuss [an issue] and say, “Okay, let’s go in this direction.”

Of course, I reported to the Board on a regular basis to update them on the technical progress, but the design was set. We did not have a lot of influences from outside; we kept it really closed, trying hard not to make all the decisions in committees in order to keep the car really sharp and focused.

Excellence: What were the overall goals from the beginning?

Dr. Walliser: Simple. We wanted to keep the design of the show car intact, get fuel consumption to three liters [per 100km] and return a Nürburgring time as fast as the Carrera GT. We hit the others, for sure. Eventually though, the ’Ring time was ten seconds faster than the Carrera GT, so we didn’t just hit this target, it was tremendously better.

Excellence: To what extent did motorsport play a part in the development of the 918 Spyder? 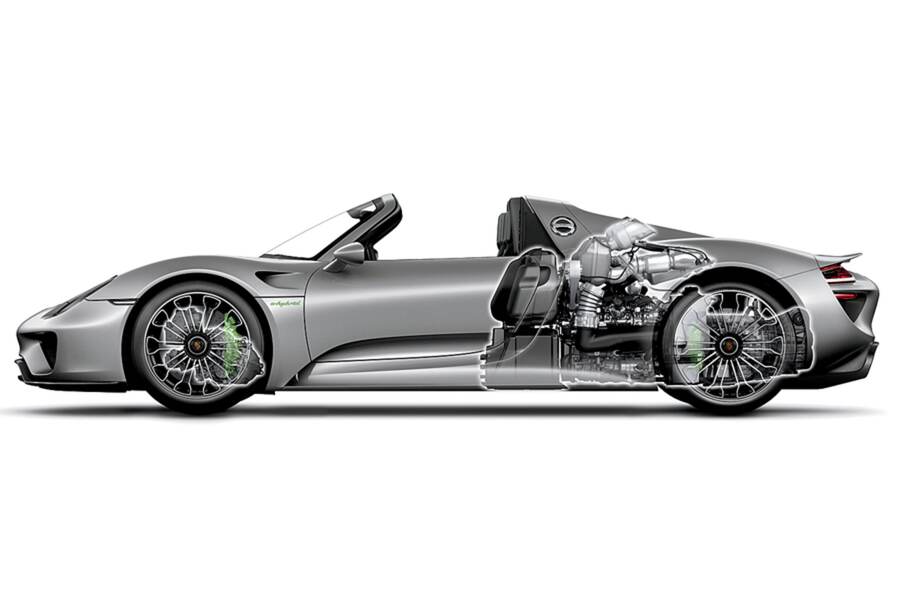 Dr. Walliser: We integrated [the 918 team into] the motorsport department so that [everyone] was in the same area, located where the LMP and GT program is based. We had a family of three: the 918 program, the GT program and the Le Mans program. The workshop is from motorsports, some of the engineers are also from motorsports, and a lot of the designers and engineers from the LMP2 project just came over to the 918 project. So a lot of experience from a variety of motorsports.

Excellence: So you had a lot of motorsport talent working on the 918, but was there anything directly from your racing programs?

Dr. Walliser: The engine. The engine is very, very close to the RS Spyder engine. In fact, it’s a totally new engine, unlike the V8 in our other cars. The ideas behind that design were chief engineered on the Mulsanne.

We learned a lot. We had technical regulations based on a certain restrictor, so we learned a lot on friction reduction in the racing engine. The less friction you have, the more power you get out of the engine. For fuel consumption it’s exactly the same; bring down the friction of the engine and you’ll reduce the consumption and get a lot of power as well.

The key to bring the fuel consumption of the car down is really in the engine, not so much the hybrid drivetrain.

Excellence: You’ve drawn on the historical connection of the 917, which was never a road car. Why is this connection so important to the 918?

Dr. Walliser: The 917 was the groundbreaking race car, maybe of the century, but definitely of its decade. It was something of a growing up for Porsche also, which was coming from all of these class victories as a small manufacturer [but never winning outright].

Also in the background, the 911 was already for six years established when the 917 introduced turbocharging for the first time in racing, and then just four years later it appeared on the street car, the 911 Turbo. It was very extreme from a technology standpoint, with a magnesium tube frame, for instance; they tried everything and they spent a lot of money. It was really the big step for Porsche in its next generation—the most important moment, the next “form” of Porsche.

You can’t compare the times directly, but…well, I’m not sure the general public will connect the 917 to the 918, but it provided a lot of internal fuel.

Excellence: How necessary was it for Porsche’s newest supercar to employ a hybrid drivetrain?

Dr. Walliser: The decision for the 918 was made in 2009. The merger with Volkswagen had just started, and the takeover trouble had just ended. It was necessary for Porsche from the inside to have a clear direction forward for the future. At the same time we had a hard economic crisis in the whole world, and the CO2 discussion was extremely hard in the U.S., in China and in Europe. And we realized that if sports cars disappeared, well, Porsche was gone. So we had to find a solution. We had the technology. And now the car is here.

Excellence: As part of a larger company that also produces super cars, how does the 918 help Porsche maintain its unique identity?

Dr. Walliser: I have a lot of colleagues [from other Volkswagen Group brands] that call every week and ask if they can have a ride in the 918! So I think there is a lot of interest from our new sisters and brothers in what we are doing, but the relationships are good. Talking to our colleagues from Bugatti and Lamborghini, I think it’s important that we have a good working relationship as small sports car manufacturers, but we have clearly different programs.

I don’t think there will ever be a 918 with a Lamborghini badge, or Audi. We closed this discussion in the beginning. Even in the [Volkswagen] group, we still make the [Porsche] decisions. We told the board, “Nope, we will not report [on this project] except to the supervisory board.”

I think this is part of the success story of the Volkswagen Group, that the brands are very alive, that they are not controlled from above. Each organization has its own culture. If you have several kids in your family, they all have their own character even though the parents are the same. It’s really about building these characters with the Volkswagen Group. The 918 is Porsche’s character.

Excellence: With only 918 examples of the 918 Spyder being built, what comes next?

Dr. Walliser: 919? No, just kidding! Honestly, a car like the 918 comes every decade, not every few years. Supercars are collector pieces, they’re fun. But we don’t always have to have a supercar. There’s been almost a decade since the Carrera GT. In five or ten years, or whenever we do another big project like this—whatever that is—it will serve as good motivation for members of the team to reach beyond. 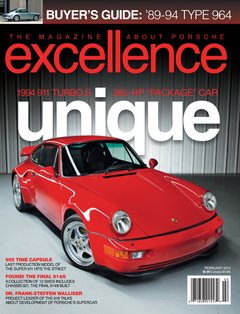