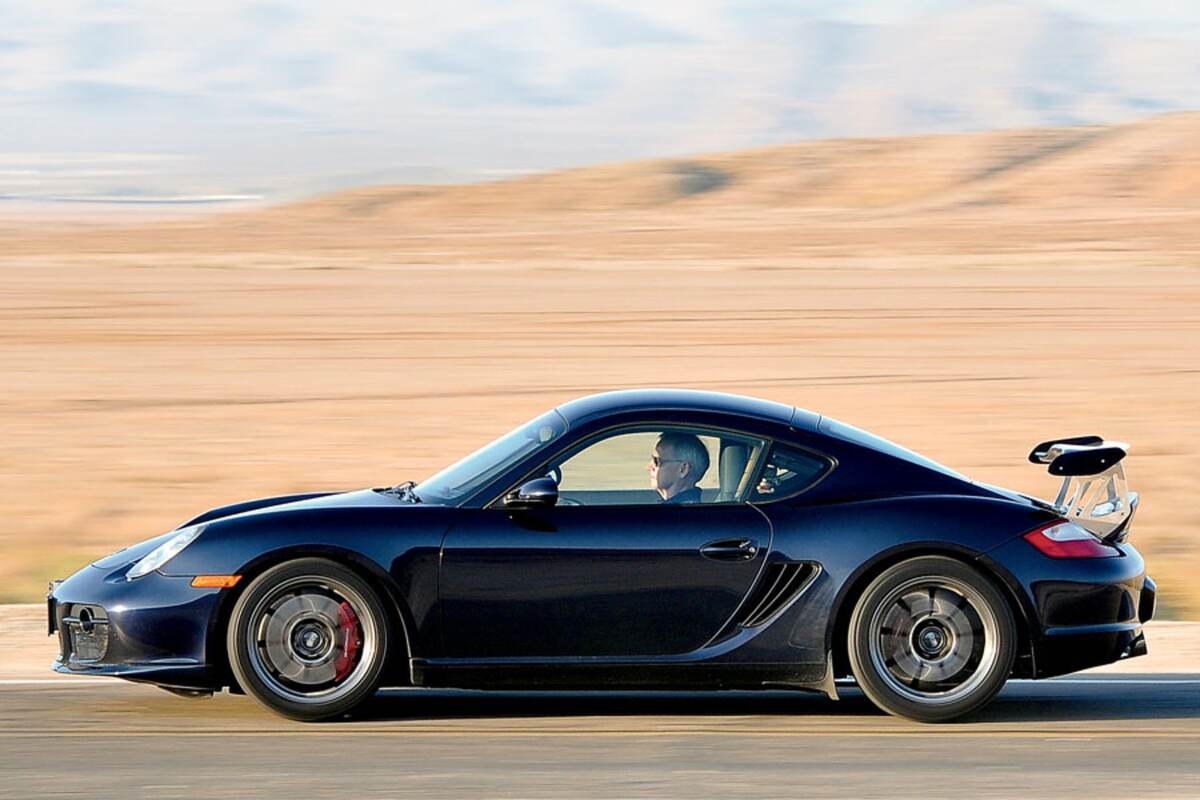 It was a recurring nightmare for Bruce Blockus, a bleak scenario that played itself out on track days up and down the East Coast. It always started with a corner—it could be a fast or a slow one—and the rear bumper of a 911 close enough for him to read the serial numbers on the license plate’s expiration sticker.

Being held up in the corners wasn’t just killing his lap times. The most frustrating part was watching the 911s pull away down the straights, only to be reeled in once again in the next corner. Blockus was trapped in racer’s purgatory.

As a PCA driving instructor and track junkie, Blockus would end up clocking plenty of hard-earned miles on his 2007 Cayman S—until rod bearing number six failed at 25,000 miles. He considered both a rebuild and an engine swap, but he was determined to put an end to the torture of watching those 911s block his way to the front. 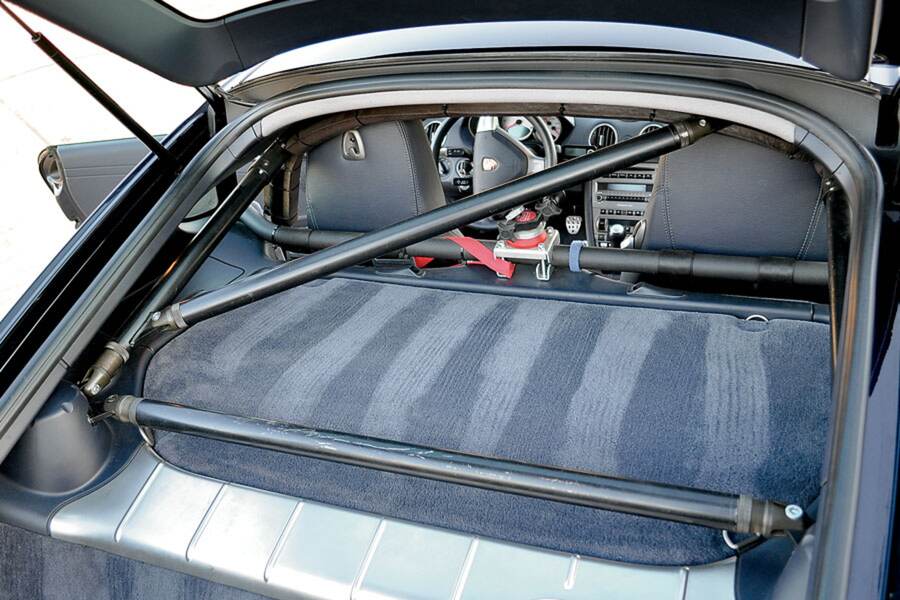 Blockus had thought about upgrading to a 3.8-liter Carrera S engine with the X51 power package, which he’d then optimize with aftermarket headers and a freer flowing exhaust system. He weighed that against TPC Racing’s Cayman S turbo kit, which had been on the market for about 18 months and had received good reviews from participants in the Cayman forums. In the end he opted for TPC’s kit: It offered more torque and cost about the same as the 3.8 swap.

The car was then shipped to TPC in Maryland, where company technicians installed a factory remanufactured 3.4-liter with TPC’s Stage 2 single-turbo kit, which, according to TPC, is good for 460 hp at 7200 rpm and 402 lb-ft of torque between 4000-4800 rpm.

Blockus thought highly of the TPC system, saying the extra torque and lag-free response gave it great driveability around town and, more importantly, he could finally outrun the 911s that previously had toyed with him. Then, another catastrophe: Rod bearing number six failed on his second engine as well—coincidentally, again at 25,000 miles.

Blockus said there are two prevailing theories regarding the rod bearing failures. One suggests the 3.4-liter’s heavier pistons, when compared to the standard Cayman’s 2.7-liter’s pistons, were too much for the stock engine’s rods and rod bolts, causing the big end of the rod to deform, opening up bearing clearance and eventual failure. The second theory suggests the engine needs additional scavenge pumps in the heads to send the oil back to the sumps under high cornering loads. Blockus believes the first theory is the more plausible of the two, as he’s seen 2.7-liter Boxsters and Caymans log plenty of miles on the track and are still running strong after 100,000 miles.

With another rebuild or swap in front of him, he wanted to find a shop nearer his new home in Las Vegas to perform the work. A few of his friends from the track and the forums suggested he call Vision Motorsports of Laguna Hills, California. Owner Dwain Dement has been working with Porsches since he was 15 years old, and as a former shop manager for Andial he’s overseen the builds of the some of the most dominant engines in racing history. After a long conversation with Dwain to discuss the kind of engine he wanted built, Blockus said he chose Vision because Dwain had all the right answers.

The project’s original plan was to take the 3.4 up to 3.6 liters using bigger pistons. And then Dement mentioned he had a spare 3.8-liter Carrera S engine that had been bored out to 4.0 liters. Blockus was, not surprisingly, all for it.

The engine uses 101mm forged JE pistons, which are lighter than a stock 3.4’s 96mm pistons. The crank was cross-drilled, grooved and knife-edged, and mated to forged Carrillo rods. Regarding the bearings, Vision left nothing to chance and used components from a Porsche Cup engine. To keep the oil flowing properly under heavy lateral g-loads, Vision added baffled oil sump extensions, 997 swirl pots, and a factory Porsche Motorsports air-oil separator. An oil cooler from a Cup car is a further guard against damaging temperatures.

Dement opined that the rod bearing failures could be attributed to some of the newer oils that have had the zinc taken out of them. Bearings, said Dement, need the zinc for lubrication. To offset that problem, the engine in Blockus’ Cayman runs on Redline Racing synthetic, which he buys by the drum.

After the engine was tightened up, Vision installed the TPC turbo system to see how it would run. Unfortunately, the TPC turbo is a proprietary design, and Vision could not attain the flow charts they’d need to dial in the 4.0. It was then that Vision decided to change the turbo and use different ECU programming. 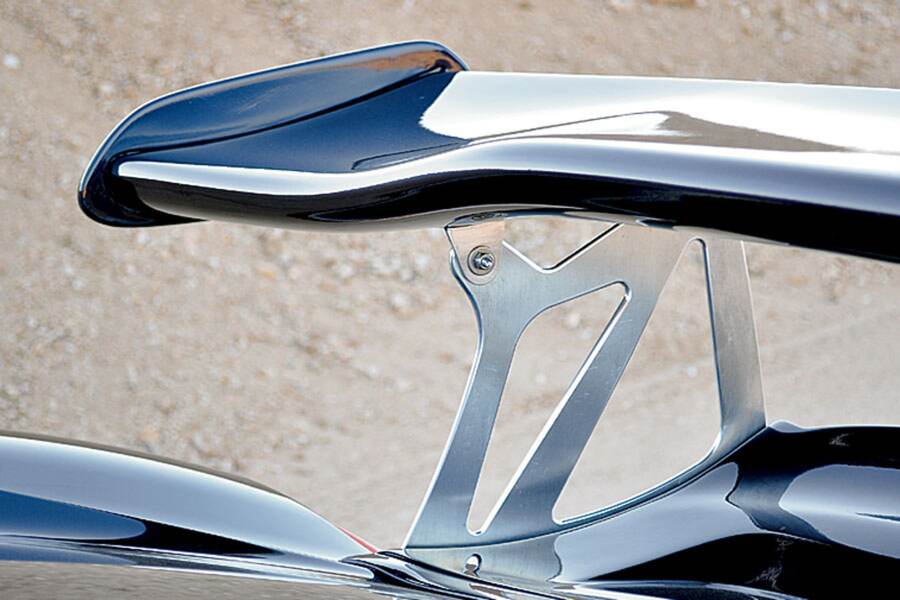 Dement said he took a look at the flow charts of several turbos and found that Garrett’s GT4094R offered what he was looking for. In order to address one of Blockus’ main concerns—a lack of speed out of the corners—he wanted to make sure turbo lag was kept at a minimum. The Garrett GT4094R bolted onto the TPC exhaust manifold, and though Vision retained TPC’s liquid-to-air intercooler, fuel injectors and exhaust system, they decided to fabricate a higher flowing, 4.0-in. intake to attach to the 4.0’s mass airflow sensor.

The new turbo required new ECU programming, so Dement contacted old friend Todd Zuccone of Evolution Motorsports to help sort out the coding. The car was shipped to Zuccone’s shop in Tempe, Arizona, for the first phase of programming and then fine-tuned at Vision’s shop. The engine now cranks out 662 hp and 613 lb-ft of torque at a relatively relaxed 0.8 bar (11.6 psi) of boost. More power was easily available, but Dement, who has built many Boxsters and Caymans for the track, said that additional grunt would be too much for the drivetrain.

On start-up the engine doesn’t sound much different than any other flat six with an aftermarket exhaust, but the stiff clutch pedal and firm bite from Vision’s custom-made clutch and pressure plate indicate there’s something special going on. The flywheel is a single-mass unit from Aasco. 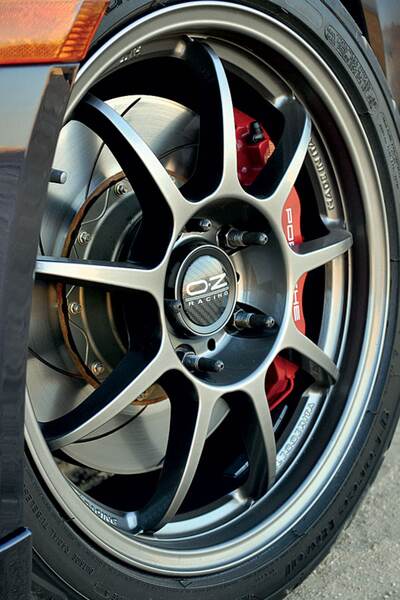 Dement said they retained the stock cams because more aggressive profiles would have hurt low-end torque. True to his calculations, the engine is as tractable down low as a stocker yet delivers more torque than a standard 3.4-liter.

Serious motivation is right now! Even part-throttle response is enough to make the hairs on the back of your neck stand up—and then faint dead away. Every jab of the pedal is met with an exponential return of forward thrust. Step on it a little further, and the turbo groans as it winds up for the huge rush of power that compresses the rear suspension and hurtles the horizon at the car with frightening velocity. 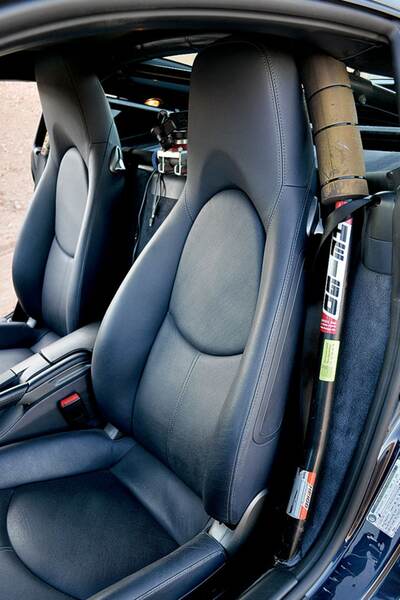 After running through the rev range a few times, I couldn’t help but be reminded of a car I recently drove, a modified 997.2 with 650 hp. My impression was confirmed when I looked at the power-to-weight ratio: Blockus’ Cayman compares favorably to a GT2 RS. It’s 50 lb heavier but also is 50 hp stronger.

The Cayman’s extra power never overwhelmed the chassis. No wiggling or squirming, even under the most intemperate acceleration. A Guard limited slip differential helps distribute the power efficiently, and a set of TPC Damptronic coilovers (that retain PASM functionality) assist in the exquisite control of the chassis, aided up front by a TPC anti-roll bar, Anze front toe links and RSS lower control arms. The rear links are from TPC, the rear anti-roll bar is by Tarrett, and the entire chassis has been stiffened by a Heigo roll bar.

The result is steering that’s beautifully direct and perfectly weighted, and the car turns in exactly as you’d want it to. There’s also plenty of that steering feedback so coveted by Porsche enthusiasts.

The tires are BF Goodrich Rivals— 245/40-18s in front and 295/35-18s at the rear—and they’re mounted on OZ Racing Alleggerita HLTs (8.5×18-in. front; 10×18-in. rear). The configuration keeps the car firmly planted to the asphalt, even at cornering speeds that questioned my sanity. My inner skidpad suggests there’s easily over 1.0g of lateral grip available, so both tight turns and long, fast sweepers are easily disposed of in the fluid motion of a tightly balanced car. A slight bit of understeer tells you the BFGs are about to exceed their slip angle, but equilibrium is easily regained by reigning back the throttle.

The car’s high-speed stability can be attributed in part to the Getty GT carbon-fiber rear wing and ducktail spoiler out back and the subtle Cayman R front splitters and custom center splitter.

Scruffing off speed up front are 997 GT3 calipers, AP rotors and Pagid Yellow brake pads; the rears are Girodisk rotors squeezed by Pagid Yellow pads and stock calipers. To keep them cool, air is fed to the front rotors through GT3 brake ducts; the rear brakes get air from 997 brake ducts. The pedal is firm and direct, and the system responds with a linear progression toward lock, but the pads seemed to need a lot of heat operate at peak efficiency.

I drove this enhanced Cayman on one of its first shakedown drives after the second round of ECU tuning and before Blockus would let it loose on the track. Based on this early driving impression, it’s safe to say he’ll still be seeing the back ends of his 911 competition, but this time when he’s coming up from behind to put them another lap down. 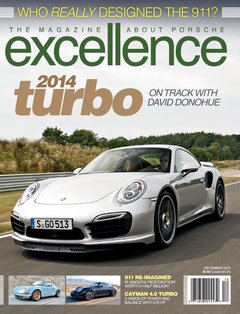