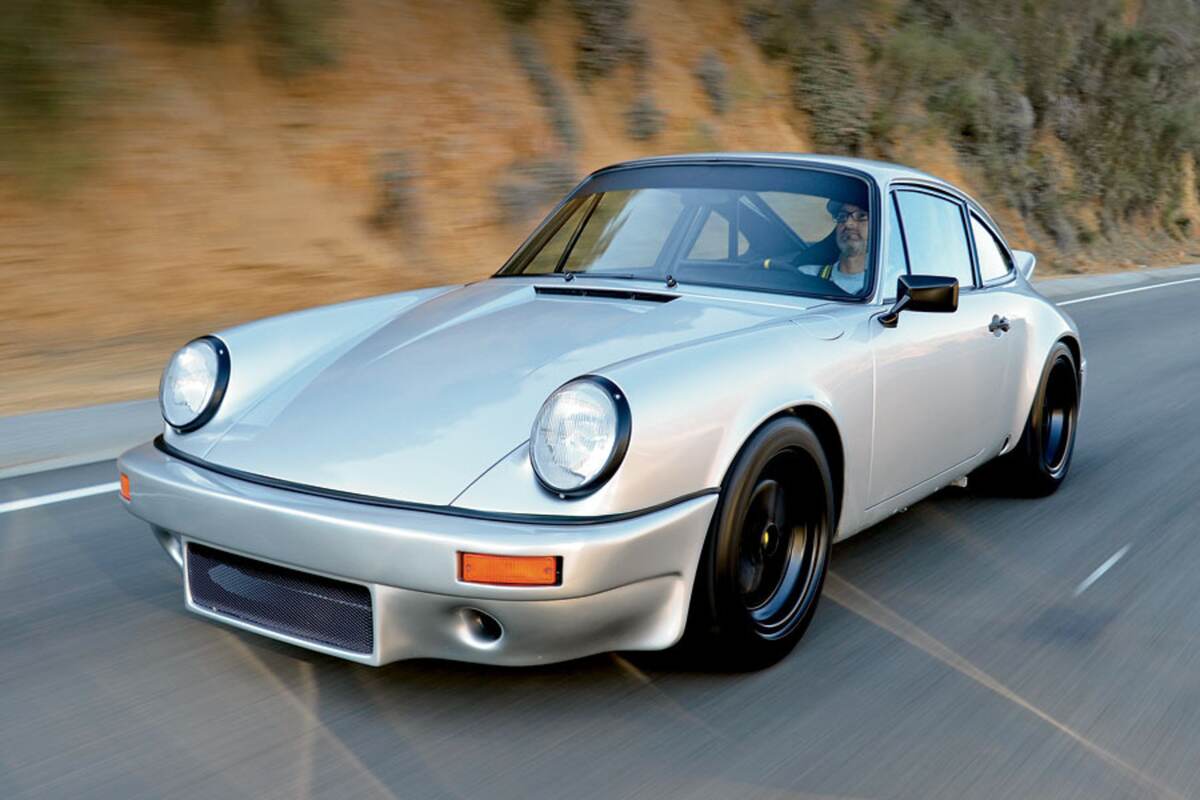 SOUTHERN CALIFORNIA PORSCHE TECHNICIAN PAUL FARRELL has owned a lot of Stuttgart metal over the years. Everything from early 911Ts to 997 Turbos to GT3s have passed through his garage. But the variation that he’s got a real soft spot for is the SC.After all, he’s owned four examples of SuperCarrera.

“I bought my first SC in 1997,”he said. “First of all, I’m a huge fan of the three liter engine. Another thing is that the SC is an extremely reliable car from the get go.” He’s certainly not alone in his belief the SC is one of the most bulletproof air-cooled 911s from the era before the model transitioned over to the 964.

Farrell’s latest SC is a stunning example that he built up in his garage with weekend canyon carving in mind.You see, Farrell has the good fortune of living a stone’s throw away from Mulholland Drive — and not the section above L.A. but the gnarly driver’s route where it whips and winds its way through the Santa Monica Mountains. 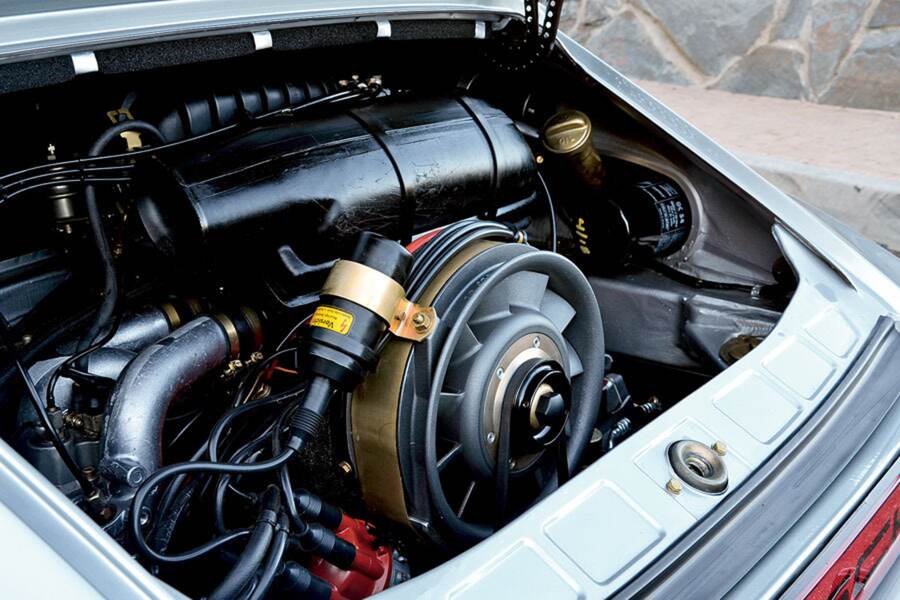 Farrell acquired the SC in 2008 after being tipped off about it by a friend. “I was looking for a cheap SC,” he said. The relatively low, $14,000 asking price of this particular one certainly fell into the category of reasonably priced SCs. The 911 in question admittedly was a pretty tired example that was parked on the street in Hollywood, but it did come in a desirable Metallic Silver over black color combination. Wheels were standard issue 16×6s and 16×7s, and the odometer was reading a well-used 188,000 miles, which in the big picture is not bad at all for the durable SC.

After looking at the car, Farrell made a counter offer, which was rejected, so the search continued. “The guy called me a few months later and told me I could have the car for $6,000 if I came that same day and picked it up,” recalled Farrell, still surprised at the oddity of the transaction. “He left the key to his house under the doormat and told me to let myself in, leave the money and take the pink slip and the keys to the SC.” A few bizarre moments later, Farrell had his SC.

“It had been parked on the street for a few months and the owner hadn’t used it for a few months,” recalled Farrell. “The paint was heavily oxidized, and it had a pretty rough interior.” The Porsche had also been parked for so long that all four tires were perilously low on air. The 911 was limped to the nearest gas station so he could air up the tires, and was then driven in the early evening dusk with inoperable headlights to Farrell’s home in Malibu. 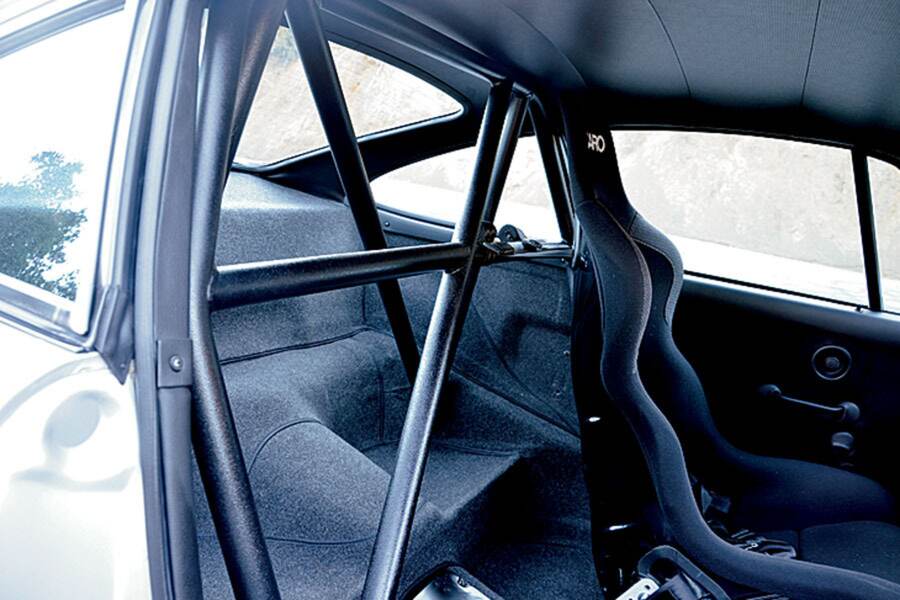 From the outset of the project, the target was a pared-down and beefed-up SC, with an eye towards maximizing the original components. So, there would be no monster 3.8 liter or radical coilover suspension but rather a conservative and measured approach to maximizing the 911’s performance envelope while staying within the parameters of the OEM components.This would also be a project built almost solely by Farrell in his small garage. Despite the fact he’s an accomplished Porsche technician with access to a full-size shop, this was going to be a home-built project.

In order to get a baseline of performance, Farrell took the stock SC for a quick blast through the Malibu canyons, which quickly revealed the obvious. The 911 had a tired suspension that was soft and floaty, and the motor had seen better days.Once it was wheeled back into the garage, the first order of business was stripping the weathered 911 down to a bare shell. “I took the motor out and then stripped out the sound deadening,” he says. “Basically, I put it on a severe diet.”

Farrell also broke out his welder and cleaned up the SC’s body shell. “I welded up the mirror holes, the windshield washer nozzle holes, the antenna hole and the rocker armholes.”With a less-is-more mantra driving the project, Farrell also decided to remove the sunroof, filling in the hole with a Kevlar sunroof panel from Rennspeed that was bonded into the opening in the roof with epoxy.And while he was at it, he drilled out the front and rear decklid hinges and door handles to lose a little more weight. Other than the modifications to the bodywork, though, the 911 needed a minimal amount of work to prepare it for paint. With the sheetmetal prepped, the SC was sent over to Jim Bastoli Autobody in Inglewood, CA, for paint, where it was resprayed in the original Metallic Silver #L936. 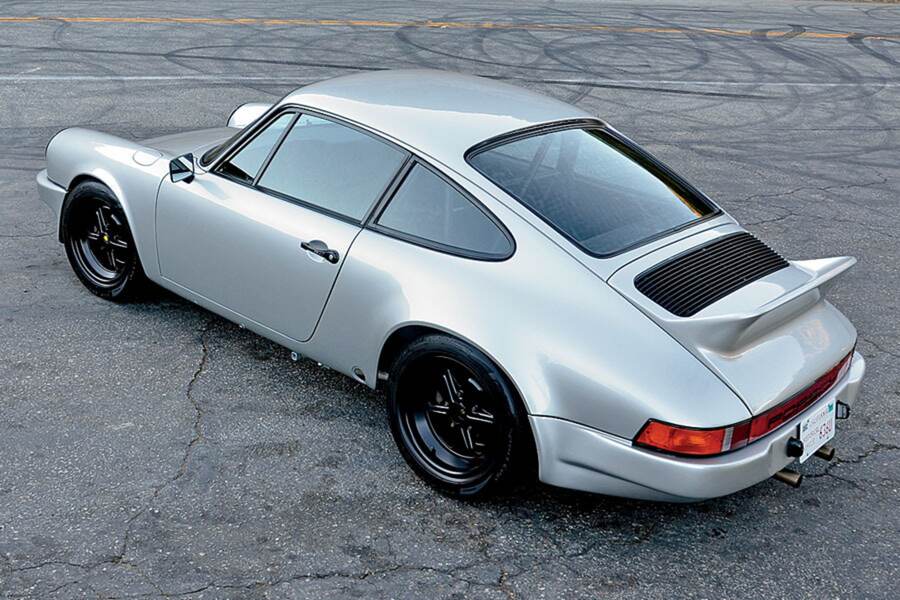 When it was time to reassemble the car, Farrell had to make some decisions. Namely, should he keep the impact bumpers or go with a more sport-purpose look? “I was thinking of going with a ducktail, but I wasn’t sure,” he said. In the end, he decided to go not only with a ducktail but with RSR/IROC-style bumpers at the front and rear. Before being re-installed, the window frames, drilled-out door handles and miscellaneous other trim were powdercoated black before being bolted carefully into place. The SC received all new seals and soft parts as well, all of which were sourced from Rusnak Porsche in Thousand Oaks. By the time the SC had been lightened, it tipped the scales at an impressively low 2100 lb, a bantamweight figure that would measure up well with the motor Farrell would end up building.

Initially Farrell figured the lightened SC would perform pretty well with a stock rebuild while also maintaining daily drivability and these cars’ well-known reliability. That all changed, however,when he came across a used but very nice set of desirable Max Moritz pistons that would bump the compression of the 3.0 liter to 9.8:1. The engine’s original barrels were sent to EBS,where they were replated with nickel. In order to shift the powerband a little higher, the cams were sent to Dougherty Cams and reground to the same specs used by the 964. Continuing the theme of massaging the existing components, Farrell ported the heads and then sent the heads to Randy Aase at Aasco,where they were rebuilt with stock valves, stainless-steel valve springs and titanium retainers. The openings on the intake manifold were also port-matched to the heads for better airflow.

When it comes to modified SC motors, converting to carburetors is a common—and easy—way to get more power.As the CIS fuel injection that was fitted to the SC’s 3.0-liter motor ages, it can become problematic, not to mention how hard it is to get parts.However, Farrell elected to keep the stock fuel injection but with a couple of changes to restore and improve performance. A European fuel distributor moves more gas through the system, an upgrade that he said was in part dictated by use of the higher compression pistons. New fuel injectors were also installed.On the ignition end of the equation, the stock Bosch distributor was recurved to ’74 RSR 3.0-liter specs by Aaron Burnham at Rennwerks, who also lightened the flywheel, a change that frees up revs and adds a few horsepower. The engine upgrades are rounded out by Bursch headers that deliver spent engine gases to an M&K sport muffler.With the exception of the lightened flywheel, the SC’s 915 five-speed and clutch are stock. 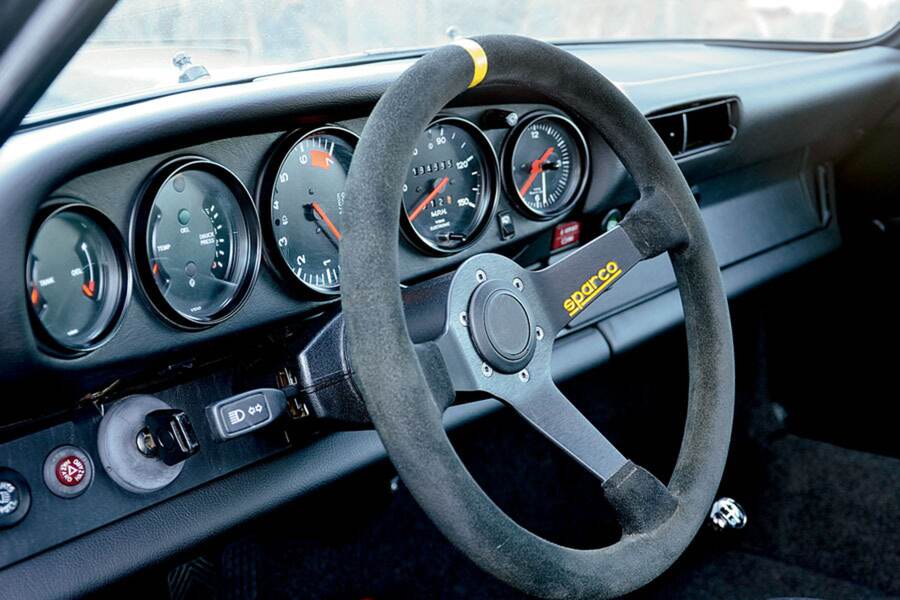 In the past, Farrell has converted a few of the SCs he’s owned to carburetion but said he’s a big fan of a well-set-up CIS system like the one on his car.“At a standstill, the carburetors always sound better,” he admitted. “But as far as accelerator response while moving, CIS provides a good, smooth, linear powerband. The powerband is now larger, and the engine pulls really well above 3500 rpm. I now shift around 5500 to 6000 rpm.” The 911 is also more drivable than a carb’d car. “It doesn’t pop and backfire when I’m going uphill like the early carbureted cars. It works really well.”

Elsewhere, the 911 has been reduced to the bare essentials as much as possible. The stock air conditioning was removed, as was the spare that would normally reside in the trunk. On the inside, Farrell removed the stock carpeting and then scraped away all of the sound deadening. In went an RS-style carpet kit from Appbiz products. Minimalist RS door panels were installed along with a grippy suede Sparco steering wheel. Though the factory seats have been reupholstered, they’re being stored. In keeping with the canyon runner theme, he prefers to run the SC with only a driver’s seat, in this case a Recaro SPG. In the area where the back seats used to be is a rollbar, a copy of the European-spec GT3 RS part. “We had to recreate the mounting points and modify some of the bar, but it actually fit pretty well,” noted Farrell. It also looks the biz.

Despite the car’s rather aggressive demeanor in most regards, the suspension has been kept pretty close to stock. New Bilstein heavy-duty shocks were installed at all four corners, and the spindles were raised to lower the roll center. Not only does this help the suspension feel more planted, but it reduces the tendency of the inside front wheel lifting during aggressive cornering. 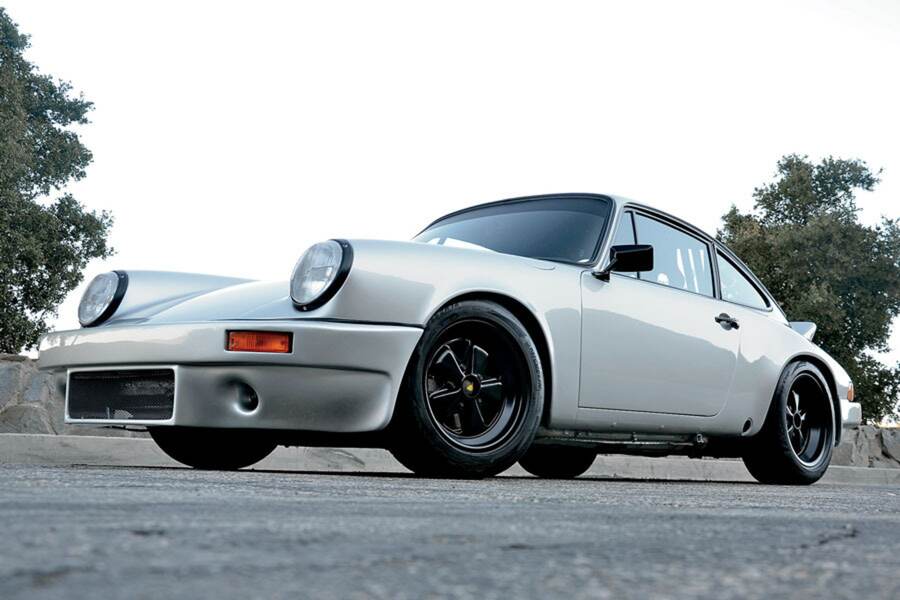 Elsewhere the 911 retains its stock torsion bars and sway bars. “For not having too much done to the suspension, it handles unusually well, although I will be stiffening up the torsion bars in its future,” said Farrell. “It definitely has a lot to do with weight, and the R-compound tires help.” The SC’s brakes are stock as well, though Farrell is running Pagid Orange pads for a little extra bite. When he acquired the SC, it was still rolling on the stock 6- and 7-in.-wide Fuchs. To add a little more grip to the rear and achieve the proper stance, the 16×7-in. rear wheels were rotated to the front and a new pair of 16×8-in. Fuchs were installed on the rear. The wheels were powdercoated black to match the black trim on the body and then shod with 205/50-16 front and 225/50-16 rear Michelin Sport Cups, which feature a grippy R-compound. “I love the tires, but they last only about 350 miles,” admitted Farrell.

Since completing the build, the SC has been enjoying a life where it gets driven hard and often on Mullholand Drive and the hundreds of miles of winding roads that crisscross the hills above Malibu. Fittingly enough, that’s also where the author stumbled across Farrell’s SC, parked at an overlook on Mullholand.One look at this silver bullet was all I needed to tell me it was the product of an enthusiast who gets it. After pouring over it in person, I have to say its one of the best looking SCs, if not the best looking, I’ve had the pleasure to be around. While a number of SCs have passed through his hands, this one looks like it will be in Farrell’s garage for a while. 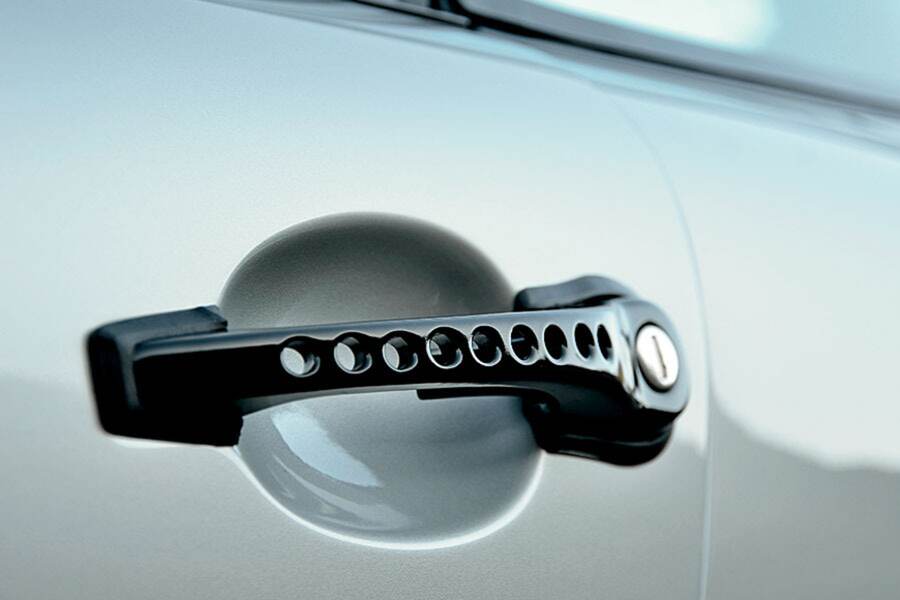 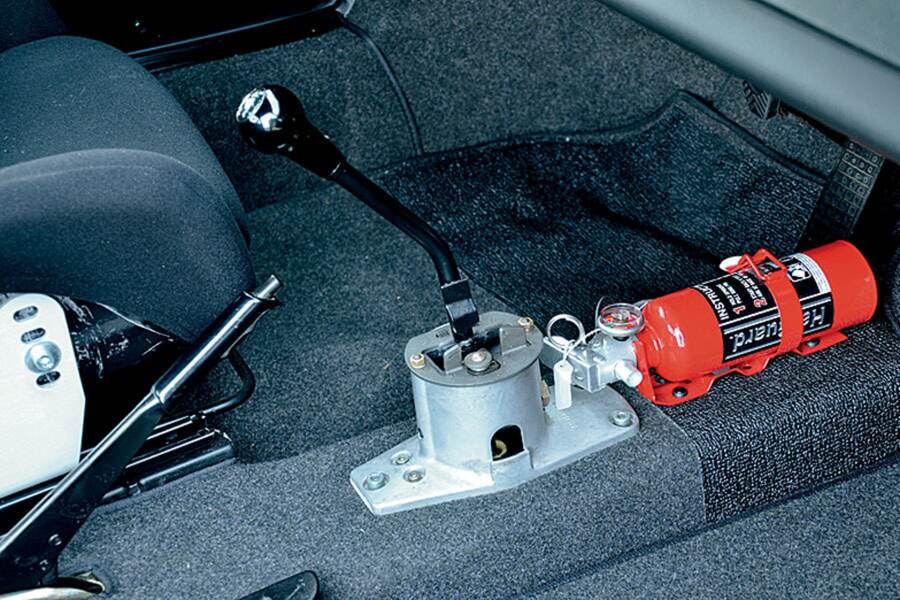 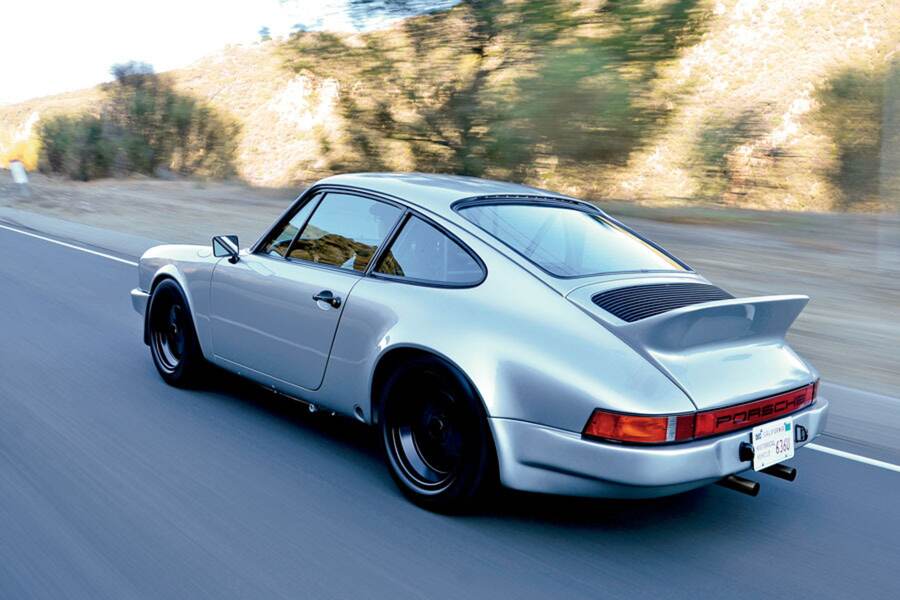 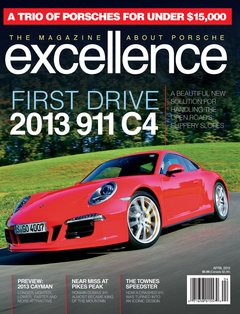