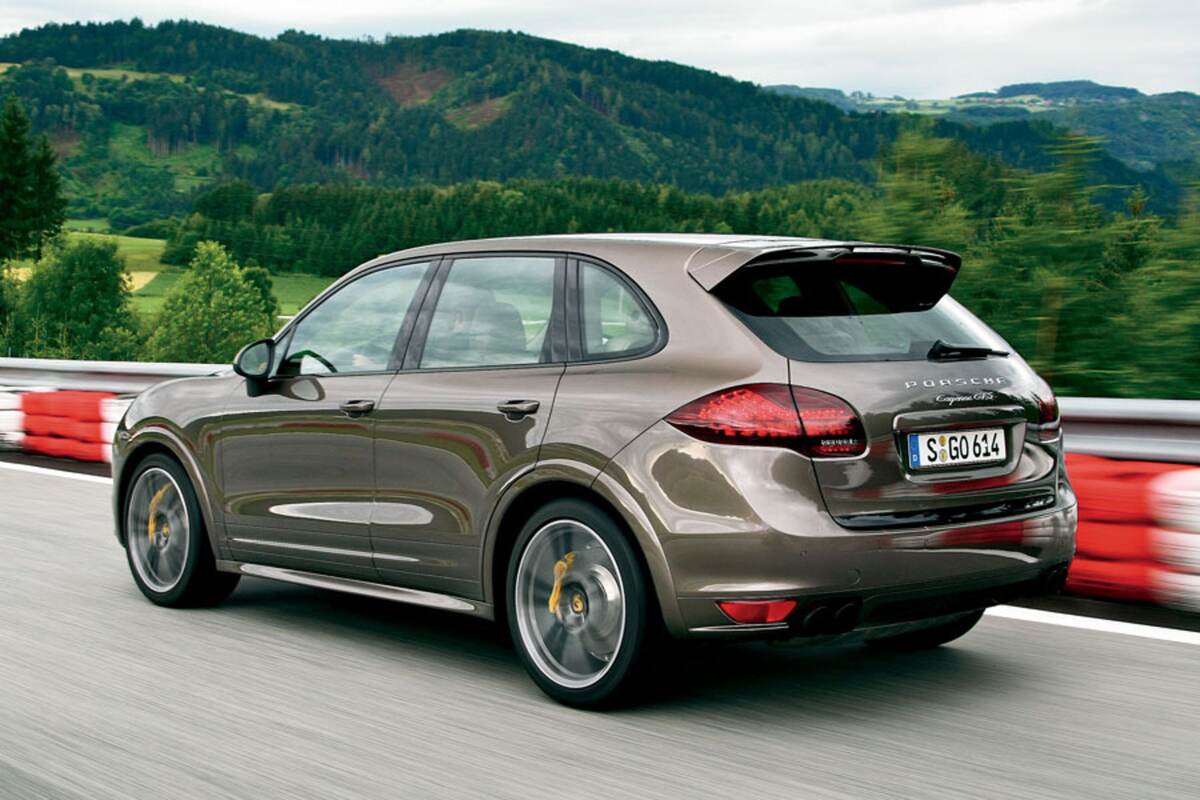 WE ARRIVED BY PRIVATE JET IN KLAGENFURT, AUSTRIA, like Warren Buffett dropping in for truffles. And like Warren, we were prepared to be amused. The particular truffle we hunted, singular item, was Porsche’s latest SUV, the GTS. We were to be forced to drive it through the Carin­thian Alps, a filthy scheme meant to distract us from noticing any shortcomings.

We asked our hosts if we’d be doing any off-roading in the Alps. We were met with a misty grin. Of course, the GTS can be ordered with skid plates and all that. Three or four buyers do so every year, and each are having their heads examined as we speak. Rare is the owner who will chance gouging his GTS’s front fender on a jagged rock. That would be a bad day.

Our hosts make no apology. They stress the GTS’s appeal is strongly “emotional.” Its first and strongest impression, with two gaping outboard air intakes in the grill, recalls the Cayenne Turbo. Yet this GTS is normally aspirated, and, in fact, the outboard intakes are blanks. Whatzzat? Pure Turbo-Look. Remember the ’80s? 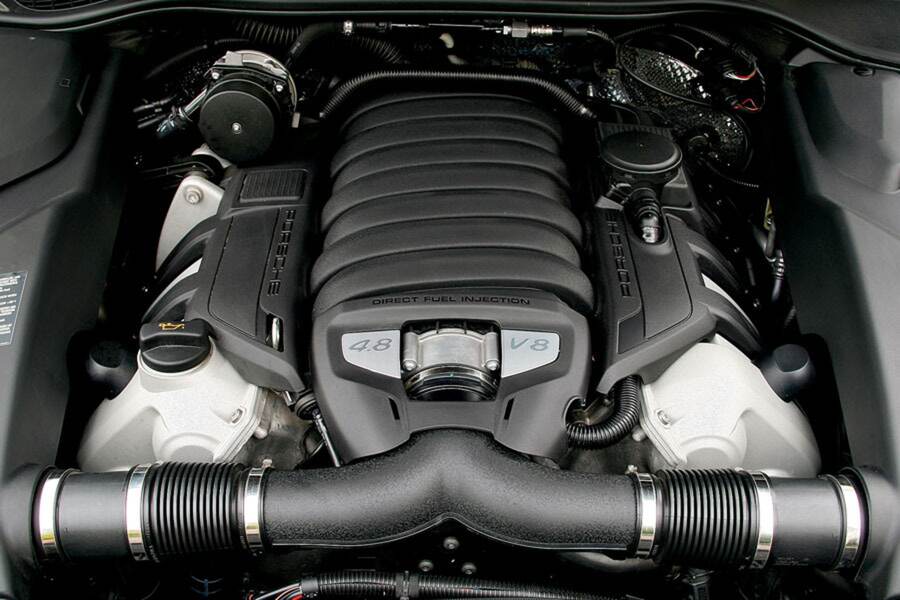 The first-generation GTS was a great success, with 15,766 units sold (17 percent of world Cay­enne sales). But, world­wide, only three percent of them were ordered with a manual transmission. Not surprisingly, then, all second-generation GTSs are born with the eight-speed Tip­tronic, with seventh and eighth gears overdriven.

Just as its nose has the look of power, the GTS goes out of its way to provide real — if not quite Turbo — power and performance. What’s more, it makes double damn sure the driver hears and feels this power and performance. The satisfyingly brawny 4.8-liter V8 achieves 420 hp — 20 more than the Cayenne S 4.8 — thanks to new cam­shafts that lift the intake valves one millimeter higher than before. The engine makes 380 lb-ft at 3500 rpm, and its torque curve remains obligingly flat across most of the upper range.

In addition to this useful, basic thrust, the GTS has a Sport button on the console. When pushed, it not only brings the driver sharper throttle response — here comes the smoke and mirrors — but a Holly­wood soundtrack, complete with racy sounds, rumbling exhaust note, and plenty of revvy roaring. Why isn’t Sport the default setting? Its testier throttle response means slightly poorer fuel economy. 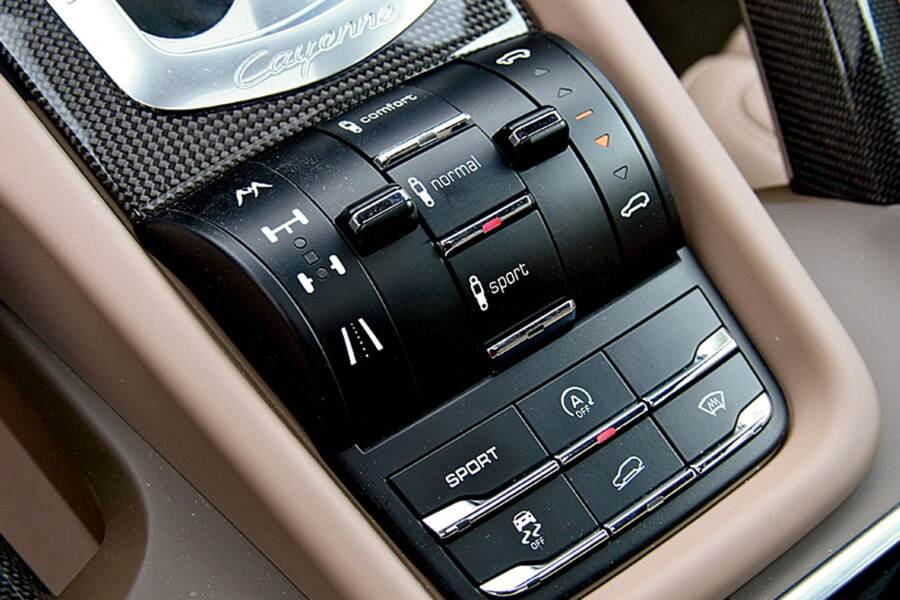 Transmitting these sonic good tidings via what Porsche calls a Sound Symposer, the designers have burrowed and gouged channels into the GTS frame, even creeping halfway up inside the A-pillars like some weird pipe organ — really! — to carry 4.8 liters of naturally amplified metallic mayhem direct to your famished ears. Okay, it’s a bit Hollywood. But, given the GTS’s substantial real-world performance — which feels as legitimate as its soundtrack feels “emotional” (to use Porsche’s vaguely squirmy term) — this GTS blasts to 60 mph in a forceful 5.4 seconds. By any SUV standard, that’s slam-bang fast.

Our test route promised high alps, but the minute we began climbing them, rain swallowed us. Glum news for photography, great news for driving. Aus­tria’s polizei are famously not entertained by those who disobey the local underachieving speed limits, but driving in wet and grime, you can have all the fun of going too fast for the conditions while not actually violating the peace.

The GTS’s all-business steering wheel had no secondary controls, with the vital exception of ready-to-rumble Tiptronic paddle shifters. We suspected the standard Porsche Trac­tion Management would un­obtrusively prove itself far more often than we would realize on the climbing, winding, whooptie-doing little mountain roads, and it did. Whenever applying more power than the rear wheels can fully use, PTM transfers drive to the front wheels. 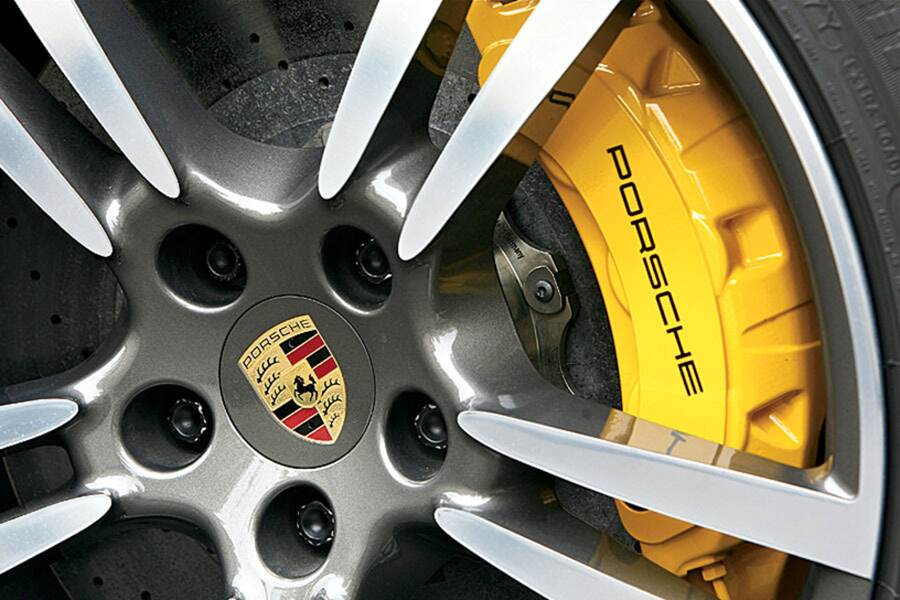 We were blessed with something even more precious: the optional Porsche Torque Vector­ing Plus. The system can apply braking to an inside rear wheel or add power via the electronically controlled differential lock. We would test it at a small, hilly, and challenging test track where Austrians learn driving technique. The rain had slacked just enough that the surface was greasy without being downright awash — and it’s just amazing how brilliantly the 275/45R20 tires handled it. Mounted on standard 20-inch RS Spyder wheels with greater offset, the GTS enjoys a 17-mm increase in rear track over the Cay­enne S.

Bolstered by electronic stability “nannies,” the GTS made going fast on a greasy track not scary — just fun. Down at the bottom of the course were two longish, constant-radius bends rather like skidpads, and it was natural to steam into them hard, adding power, and see what happened.

What happened was inevitable. The tail stepped out wildly at about a 45° angle and then…stepped right back in! The torque-vectoring, after waiting a blink to see if I was Ayrton Senna, concluded I was not and took over. The tail tucked itself in as if it were on tracks. No over-correction. No fuss. Damn, I’m good! 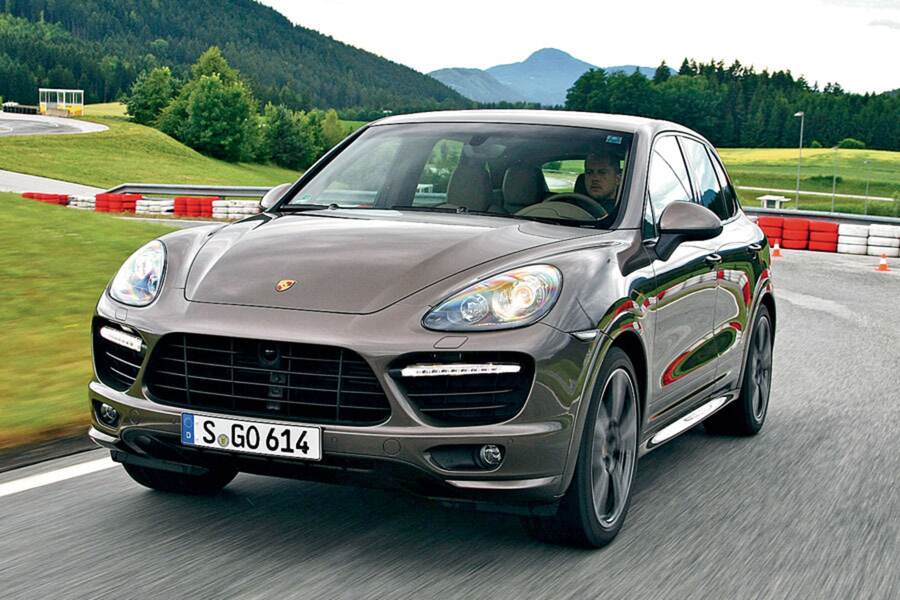 For a driver who learned to love driving long before such electronic hand-holders were imagined, it’s tempting to scoff dismissively. But PSM, PTM, and PTV Plus provide an added margin of control. You know you have overstepped the limit, no doubt of that. The systems fix you up, but only after instructing you on exactly where the limit really is. They can inform and instruct the most enthusiastic right foot, and properly calibrated, as this Porsche system is, they don’t limit speed, they limit mishap. Which is good for everyone.

A Sport Chrono Package is offered in the GTS, the first in a Cayenne. It includes a stopwatch on the dash and displays lap times as well as lateral and longitudinal acceleration on the central screen. It can be used to analyze comparative times and speeds. Unlike the 911’s Sport Chrono, however, it does not offer Launch Control.

The cabin of the GTS, we are told, is really exciting, but we honestly can’t say. Why? A “glitch” caused the press GTSs to be furnished with base Cayenne S interiors. They were very nice looking and all that, but lacked attitude. The GTS, says the book, includes Alcan­­tara trims on its seat panels, center armrest, door panels, head­liner, and pillars. We can say that the standard eight-way driver and front-passenger sport seats are excellent on long drives. 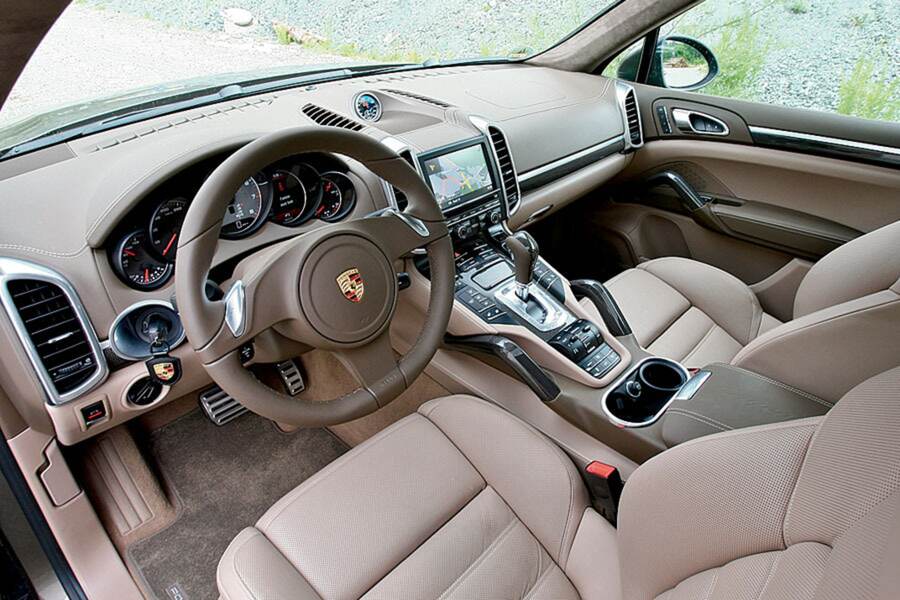 On the Cayenne GTS sound stage, Bose supplies the base audio, but an optional 14-speaker Bose surround sound system is also available. Above that, a Burmester system is composed of 16 individually controllable speakers, including a 300-watt active subwoofer with a 250-mm-diameter membrane, 16 amplifier channels, and a total output of more than 1,000 watts — enough to blow your toupée into the creek.

Porsche wants you to see, hear, and feel performance. If you don’t in the new GTS, you have to be blind, deaf, and ten times thick. This is a forceful step forward for the fastest non-turbo Cayenne. If you like an SUV that drives like an all-weather night fighter, ready for anything, at any speed, this is one. 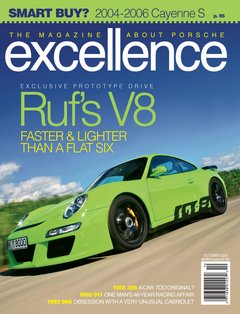