Porsche's 3,750-pound gas-electric hybrid supercar appers to be well on its way to eclipsing the might Carrera GT's performance. 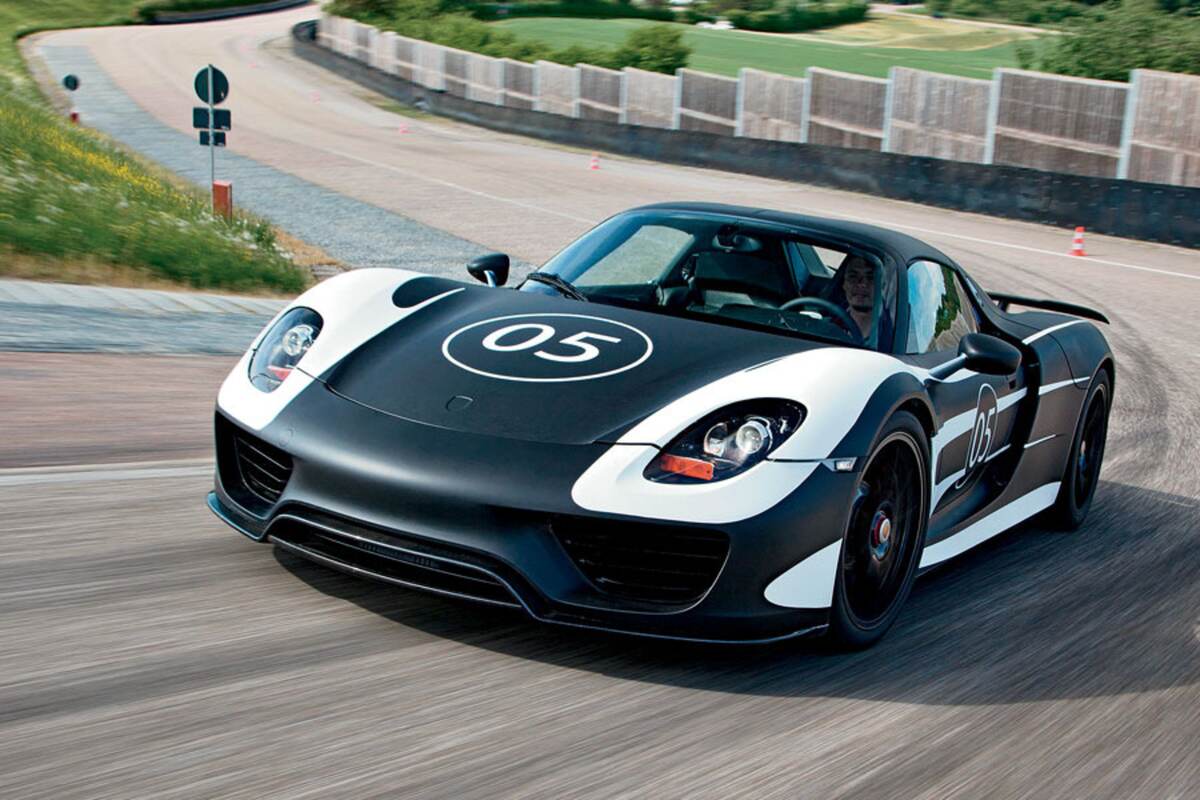 It’s an unusual way to promise a Porsche, fixing the production date two and a half years out. But that’s what Porsche did in March 2011, one year after the 918 Spy­der concept’s Geneva debut. Pro­duction of 918 units is slated to begin on 9/18/2013. It would be a bold plan if the 918 was “just” a conventional supercar. It isn’t.

The 918 is Porsche’s most technologically am­bitious road car to date, making the high-tech 1986 959 and the carbon-fiber 2004 Carrera GT look like a Toyota Hilux 4×4 and a shifter cart, respectively. The 918 Spyder is fiendishly complex — with liquid-cooled lithium-ion batteries, a pair of electric motors, an ex-racing V8, a dual-clutch PDK gearbox, selective all-wheel-drive, rear-wheel steering, active aerodynamics, and more.

It’s a new level of complexity for a two-seat Por­sche, requiring more than 50 electronic controllers and pushing the projected curb weight beyond 3,700 pounds. One wonders what Dr. Ferry Porsche, a pragmatic man focused on production sports cars, might have made of the 918 — but it’s a good bet that his father, Pro­fessor Ferdi­nand Porsche, who loved exploratory engineering, would have approved. 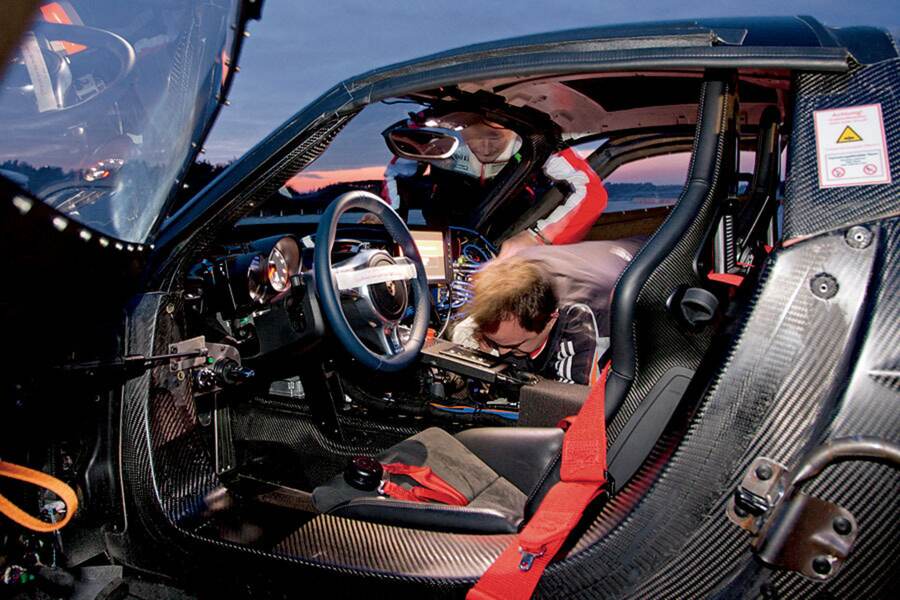 Porsche appears to be making excellent progress with the 918 Spyder. It claims a combined power output of 770 hp, though some within the company say the production car may have more than 800 hp. Por­sche says the Spyder will travel 78 miles on a gallon of gas on the European driving cycle. If your drive is short enough, you might not need gas: Electric-only range is promised to exceed 15 miles.

Of course, hypermiling your way to the supermarket isn’t the point. The 918’s stated goal is to eclipse the performance of the Carrera GT supercar. Porsche says that the 918 Spyder will be at least a full second faster to 62 mph — the CGT did it in 3.9 seconds — and able to lap the Nürburg­ring in less than 7 minutes and 22 seconds, some ten seconds faster than a CGT.

Such numbers seem feasible. Despite being roughly 700 pounds heavier than a Carrera GT, the 918 Spyder will boast 200 more horses, the instant torque that only electric motors can provide, all-wheel drive, and a PDK dual-clutch gearbox with Launch Control. That should make easy work of sub-three-second 0-60 mph runs, and Porsche says it’s after friendlier handling at the limit — something even Wal­ter Röhrl admits would have helped him score a better time at the’ Ring in the CGT. 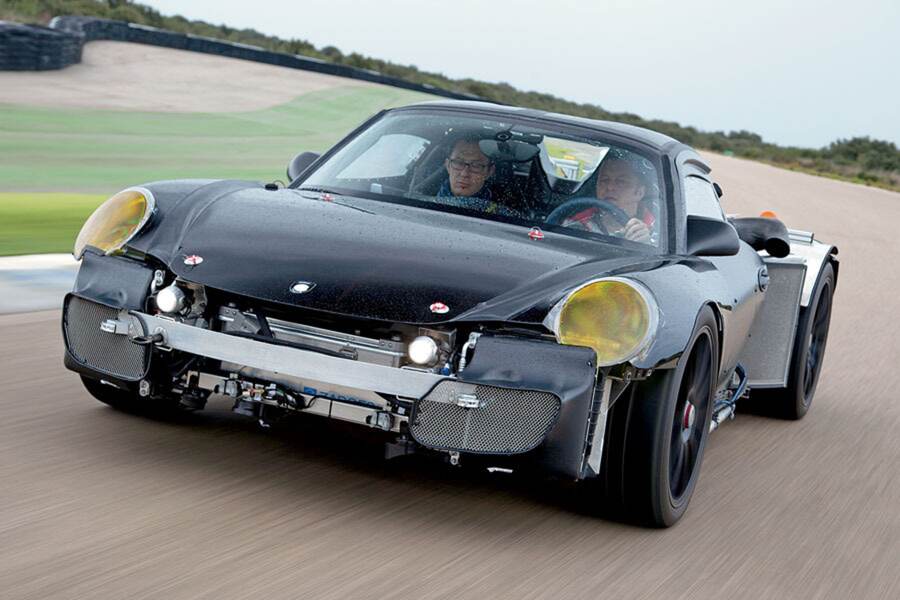 Project leader Dr. Frank Walliser has been clear from the start: Weight is the biggest challenge his team faces. He says the finalized production 918 Spyder will weigh no more than 3,750 pounds, and it’s clear his engineers are sweating as they try to offset its 700 pounds of hybrid gear.

Porsche says the 918 Spy­­der’s 4.6-liter V8 is just 25 pounds heavier than its 3.4-liter counterpart in the LMP2-class RS Spyder race car. For comparison, the Car­rera GT’s V10 gained approximately 100 pounds in the transformation from its role in an aborted LMP1-class prototype.

Walliser credits lightweight bits like the titanium connecting rods, the plastic oil-extraction pumps, and the thin-walled crankcase which, like each cylinder head, is the result of low-pressure casting. The lightweight steel crankshaft maintains the RS Spyder’s “flat-plane,” 180° crankshaft to maximize volumetric efficiency at high engine speeds, critical with an engine that makes peak power at 9000 rpm. The alloy-steel ex­haust system is “extremely thin-walled,” and the V8’s belt drives have been eliminated in favor of electric accessories. 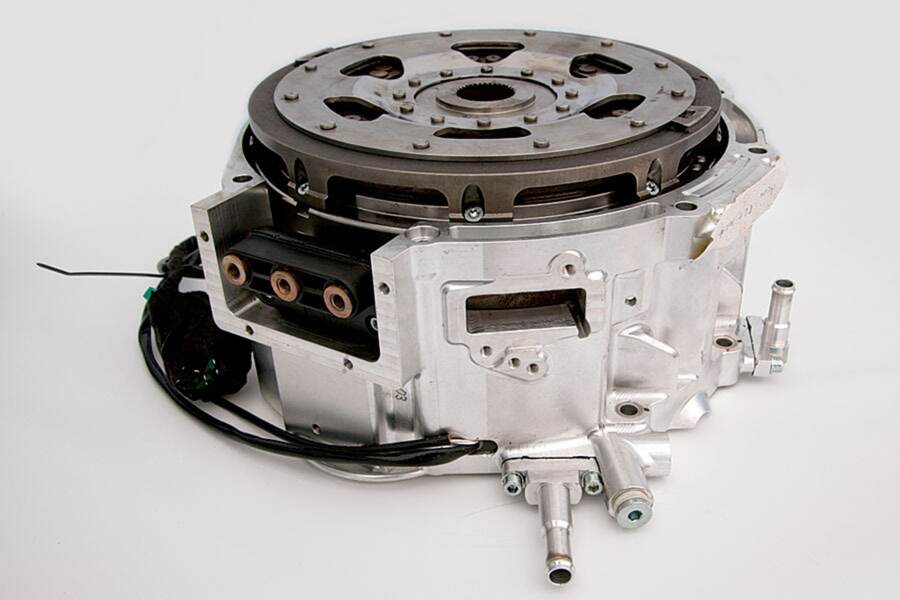 At its present 570 hp, the direct-injected V8 has a specific output of 123.9 hp, which nearly matches the 997 GT3 RS 4.0’s stellar 125 hp/liter and clearly exceeds the 5.7-liter Carrera GT’s 107 hp/liter. The Spy­der engine weighs just 290 pounds, can pass all Porsche road-car durability tests, and shares no parts with the RS Spyder V8.

That last point is understandable due to a rather significant difference: The 918 Spyder’s exhaust ports are located topside, inside the cylinder V. Short exhaust pipes exit the engine cover, an attribute Por­sche says is unique among production vehicles. There are benefits to the setup beyond the singed trouser legs promised by the 918 Spyder concept’s side pipes. The so-called “top pipes” evacuate hot exhaust gases in the shortest route possible, with less back-pressure. Meanwhile, the intake ports are located low, keeping the engine bay cooler to the benefit of the Spyder’s liquid-cooled lithium-ion battery.

The battery, which provides optimum performance at temperatures between 68° and 104° F, is mounted between the seats and the V8. Its 312 cells have a total energy content of 6.8 kilowatt hours, and can be charged at home via the socket on the passenger-side B pillar. Using a supplied cable standardized for the country of purchase, Por­sche says the 918 can be charged within four hours. The cars will also come with a “quick charger,” which can be hard-wired into the owner’s garage and will charge the battery in approximately two hours. The 918’s electric-only range is currently 15 miles depending on how it is driven. Of course, that’s up to the driver, who can select from five modes that sap resources with increasing abandon (see sidebar). 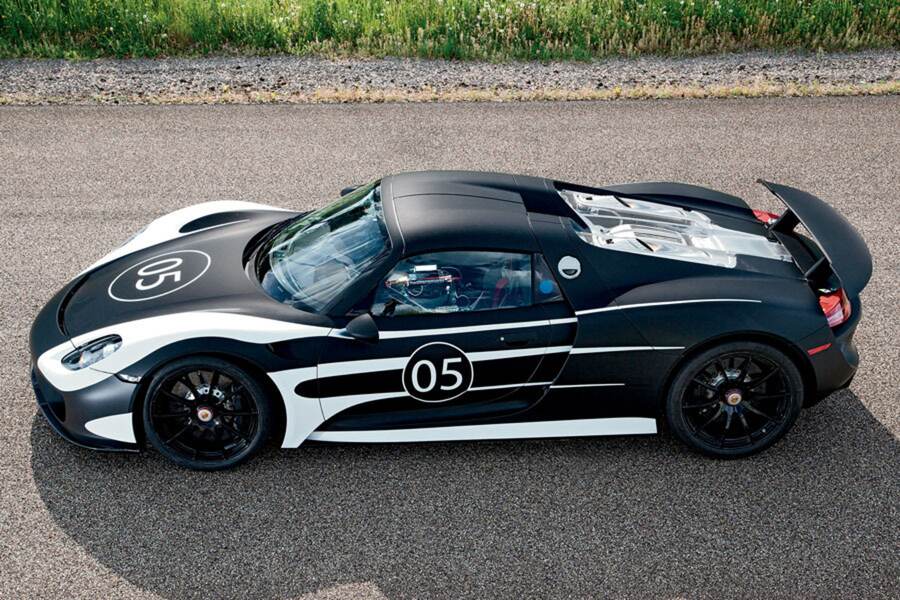 The 918 can also charge its battery on the move through a regenerative braking system considerably more efficient than the systems in the Cayenne Hybrid and Pana­mera S Hybrid. The latter recover braking energy up to deceleration of 0.15 g, which Porsche says corresponds to about 3.3 pounds of pedal force. The 918 can recover energy at up to 0.5 g, or about 24.3 pounds of pedal force. As in Porsche’s existing hy­brids, the 918’s conventional disc-brake system handles harder stops.

The battery sends power to two electric motors, either individually or in parallel. A 107-hp motor drives the front wheels through a fixed ratio, while a 121-hp motor mounted be­hind the driver sends power to the rear wheels. The forward motor can propel the Spyder up to 15 mph. It functions as needed after that, adding tor­que to either front wheel until it is disengaged at speeds exceeding 145 mph to prevent over-revving. The rear wheels can be driven by the V8 or the electric motor, or both. Be­cause the rear electric motor sends its power through the seven-speed PDK gearbox, it can contribute all the way up to the 918’s projected 202-mph top speed.

The main powertrain is mounted in a carbon-fiber-reinforced plastic carrier that bolts to the monocoque chassis, which is also rendered in CFRP. Drivetrain components and anything else weighing more than 110 pounds are located as low and as centrally as possible. To lower the V8, the PDK transmission is “upside down,” 935 style. The ’box is based on the unit found in the 997 Turbo, but gets a new case and internals. Weight distribution is said to be 43/57, with a rear bias similar to Porsche’s recent mid-engined cars. 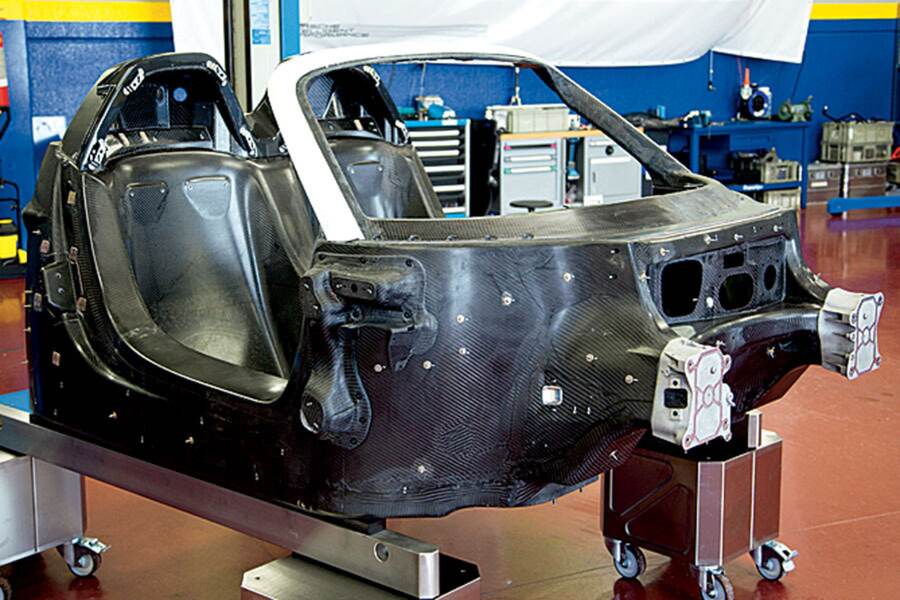 Suspension consists of double wishbones up front and multi-link at the rear. The Spyder’s PASM electronically variable dampers and PCCB ceramic-composite brakes are nothing new on a Porsche, but active rear-wheel steering is. The latter is speed-sensitive and can add a few degrees of lock in either direction. The rear wheels counter the direction of the front wheels to add agility at low speeds but mimic them at high speeds to add stability.

The list of technology will be long, from a reconfigurable thin film transistor LCD dashboard to active aerodynamics that op­timize cooling and downforce while minimizing drag. After all, buyers in this realm expect more than mere performance.

Speaking of buyers, the sales plan is as bold as the production date. Porsche has announced a U.S. base price of $845,000. That’s considerably more than the $440,000 Carrera GT — a car that struggled to find 1,270 buyers worldwide after falling short of an initial produc­tion cap of 1,500 units. Will Porsche have the last laugh with its 918 Spyder hybrid? We’ll know more in another year and a half. 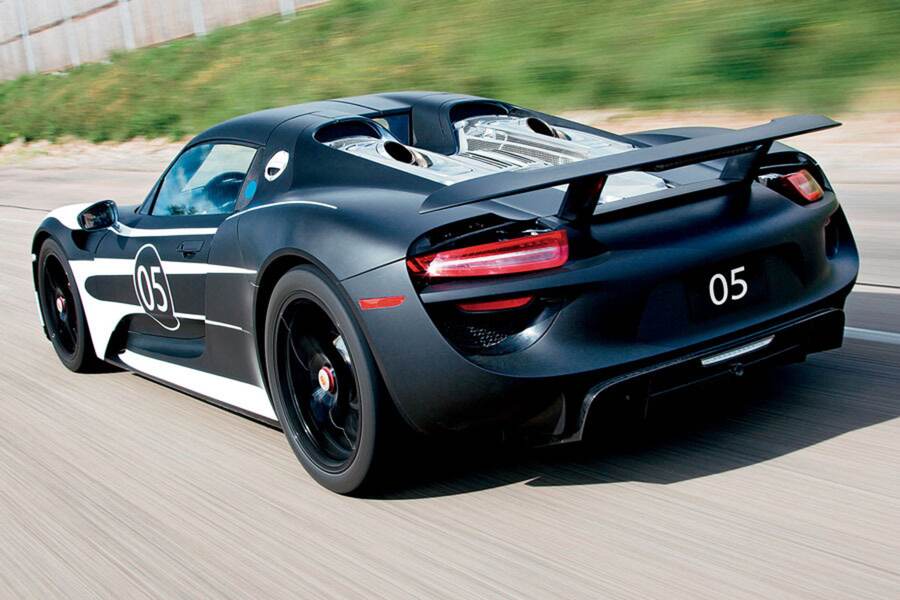 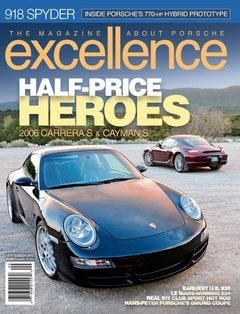