Porsche's two-seat roadster grows up — and how. 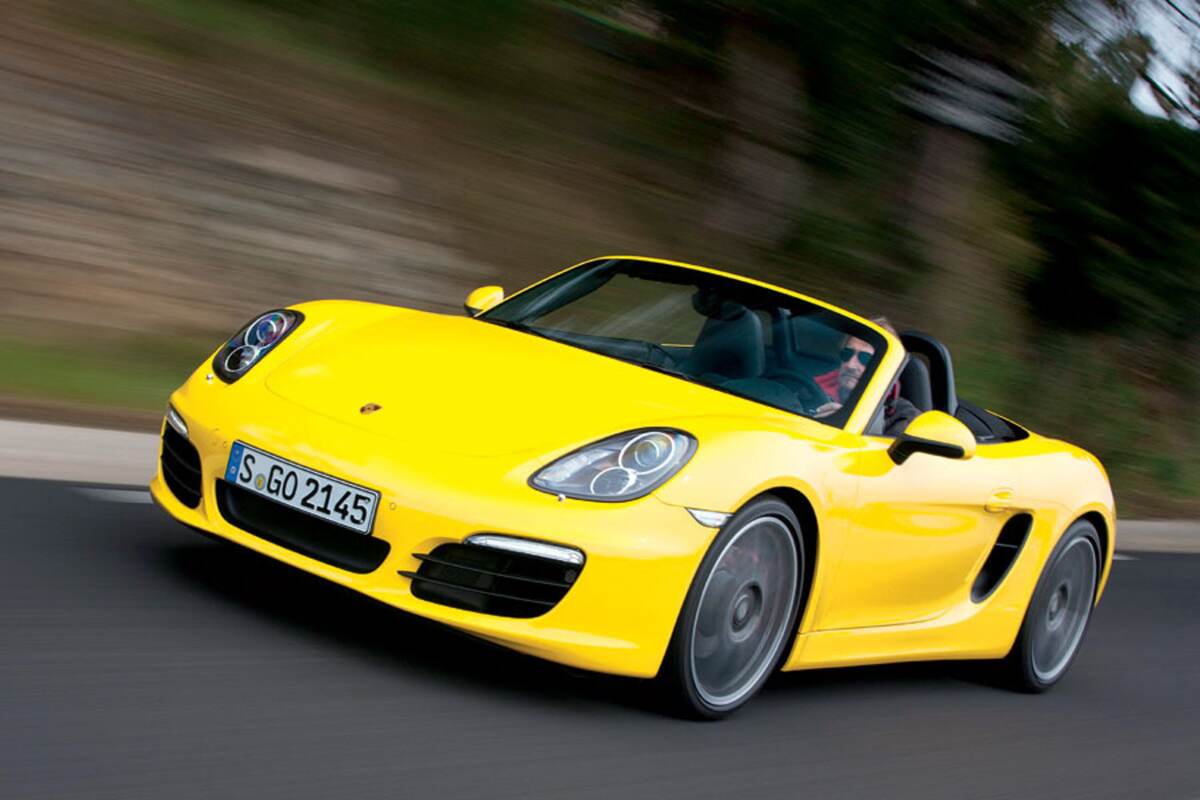 THAT THE BOXSTER HAS BECOME BOTH MORE SOPHISTICATED and more serious is clear the moment you walk up to the new one. Its chis­eled surfaces reference the 918 Spyder Hybrid, and the older Boxsters’ nearly apologetic side openings — which merely hinted at an engine amidships — have given way to pronounced openings that recall the V10 Carrera GT.

Sexier air management is one benefit of no longer having to share doorskins with the 911, as are longer fenderlines that subtly feed into the doors. Another be­comes obvious on the way to the 7800-rpm redline: The engine’s aural signature has been enhanced. Unlike 986- and 987-based Box­sters, where one opening vented hot air, the 981 gets in­takes on both sides — allowing more air in and more noise out. The latter is reflected off rock walls and guardrails along our test route in southern France. Scintillating sounds from the flat six are only made better by the optional sport exhaust. On throttle, it brings a stronger, deeper voice. Off throttle, none-too-subtle burbles and pops make the system worth every penny of its $2,950 added cost.

Given limited driving time, we chose a Boxster S with a manual transaxle. The 981 doesn’t get the new, PDK-based Aisin seven-speed manual used in the 991 because Porsche was able to meet its performance, emissions, and consumption targets with the older, lighter Getrag six-speed. Throws are fairly long fore and aft but tight side to side, with an action that is light but slightly vague. It finds the right gear every time, but could use a more positive engagement. 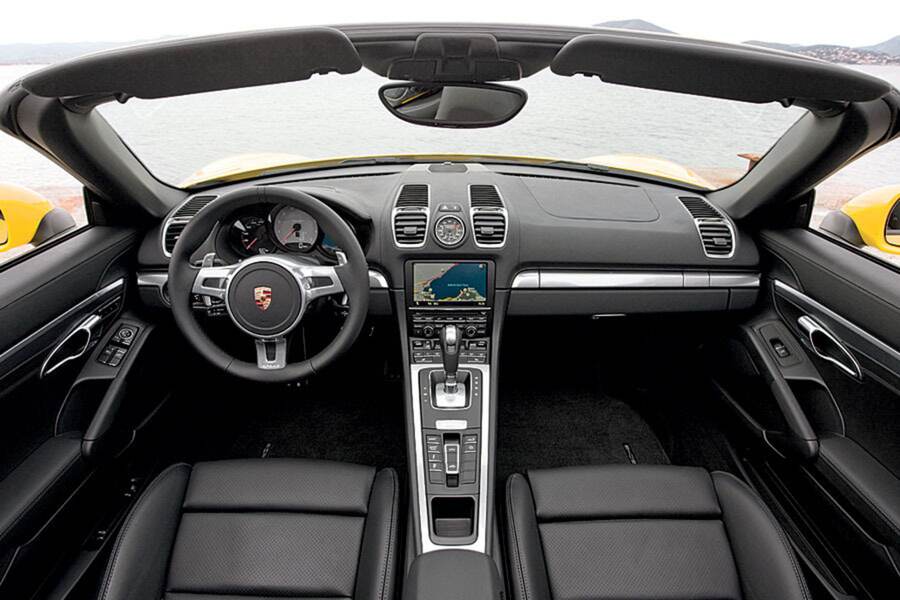 Regardless of transmission choice, the 3.4-liter 9A1 flat six — which debuted in the 2009 Boxster S — gains auto start-stop technology that works unobtrusively. The engine also shuts down in certain coasting situations, while fuel con­sumption and emissions are further reduced by recuperation of elec­tri­cal-system losses.

On the performance front, the previous hot-film mass air flow sensor has been re­placed by a less-restrictive pressure-sensing setup and VarioCam Plus gets a 10° larger adjustment range. A twin-inlet in­take with a variable resonance flap improves low-end torque. These seem like big changes for just five more horses, for a total of 315, but we suspect the revisions help the also-3.4-liter 991 Carrera make its 350 hp.

Out on the road, the car seems stronger than its specs suggest. It feels not merely quick but fast. Part of that is down to weight savings. At 2,910 pounds, the basic Boxster S is 77 pounds lighter than its predecessor. Forty-six percent of its body is rendered in aluminum, including the decklids, doors, floors, and body structures at both ends. Magnesium is used elsewhere, steel only when necessary. As in the past, the Box­ster shares at least half of its inner structure — from the seats forward — with the 911. Against the already impressive 987, “the complete body has more stiffness,” says Joachim Meyer, head of 981 chassis and suspension. “The trimmed body’s dynamic torsion is 24 Hz, (yielding) around 25 percent more stiffness in the chassis.” 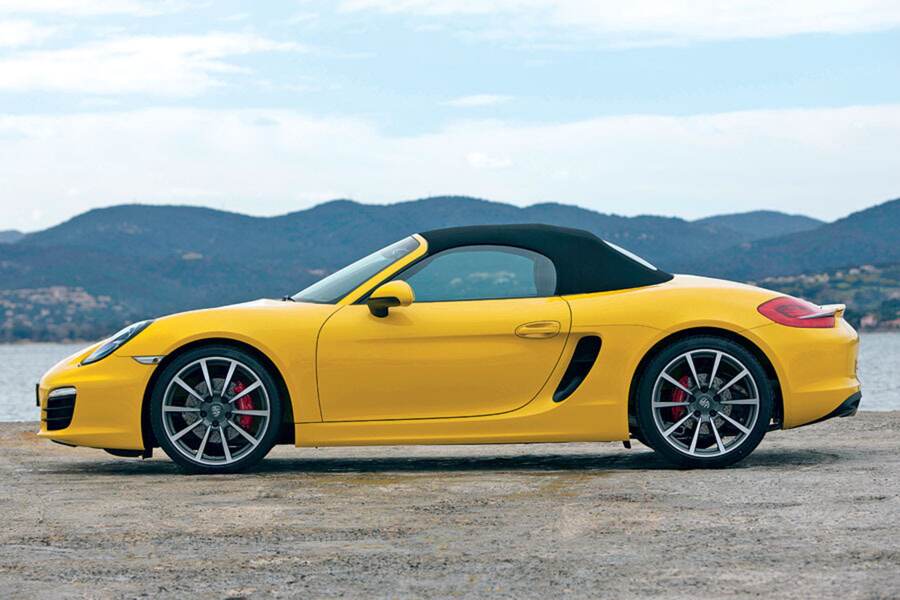 Over challenging, reasonably bumpy French roads, the 981 is stable, secure, and seemingly viceless. A 2.4-inch wheelbase stretch, track widths that are 1.6- and 0.5-inch wider front and rear, and tires with a four-percent larger overall diameter yield greater stability and more grip. Even without the $1,320 PTV torque-vectoring system, turn-in is sharp and utterly accurate.

Sitting 0.4-inch lower on $1,790 PASM suspension with adjustable dam­pers and four more vertical motion sensors than be­fore, our test car offers a supple ride and superb body control. Armed with a limited-slip diff (no price yet), it de­vours winding roads at a pace that has us wondering if a true supercar would be any faster. There may be a catch, though: If this first drive is indicative, we’re not sure the 981S feels as pure or involving as a 987S.

Reverting to the standard dampers and 19-inch tires might help, but the further we drive, it’s the steering that seems to be calling driver involvement into question. It is precise and accurate, but not as feelsome as we’d like. It’s the same electric-assist rack used in the 991, but perhaps its filtration is more noticeable in a Porsche where the back end isn’t the first thing on your mind? 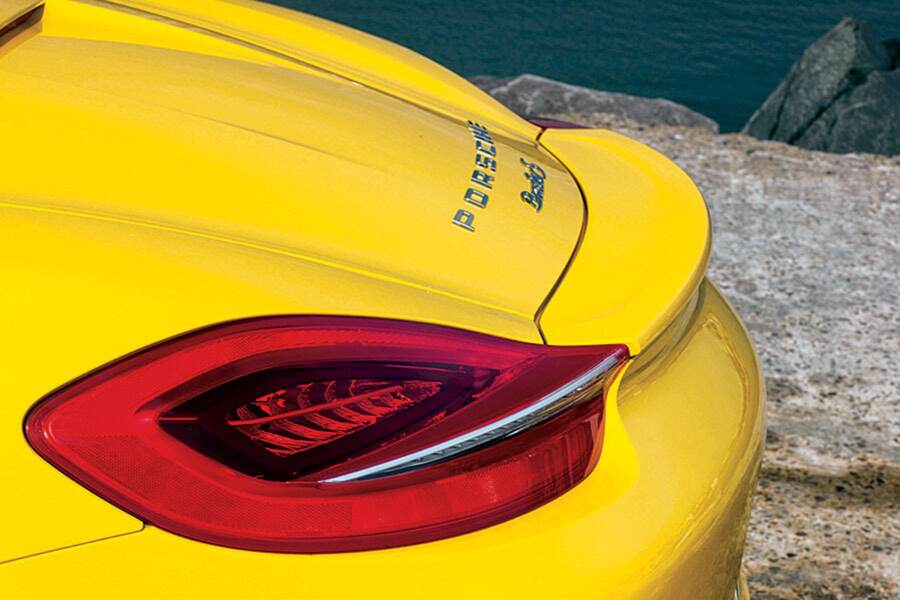 It would be a mistake to get completely hung up on the steering, however, be­cause the 981 represents a major leap on almost every level. Con­sider its top, now fully automatic — latches and all. The hard tonneau between the top and trunklid on 986s and 987s is gone. Freed of that extra step, the top goes up or down in just nine seconds. The top’s magnesium forward section creates a half-hardtop that helps cut cabin noise from 75 to 71 db at 62 mph, a 50-percent perceptional reduction according to Por­sche. While we can’t verify that, we can say the cabin is considerably quieter than a 987’s at speed.

Panel gaps look tighter than before and they all are, says head of exterior design Matthias Kulla: “We knew we had to come up with every possible trick to turn the surface quality of every single part so it would really bring across the design language.”

If the 981’s stacked headlights hint at racing Porsches past, its taillights are new. “While the top edge of the taillamp still describes the fen­der section, the contour theme is a lot more an­gular, a lot more masculine,” says Kulla. “But the biggest news is the way the taillamp interacts with the rear spoiler. It’s really a continuation of it, where design and functional issues met because this generates less lift — and we’re talking almost zero lift in the rear now.” 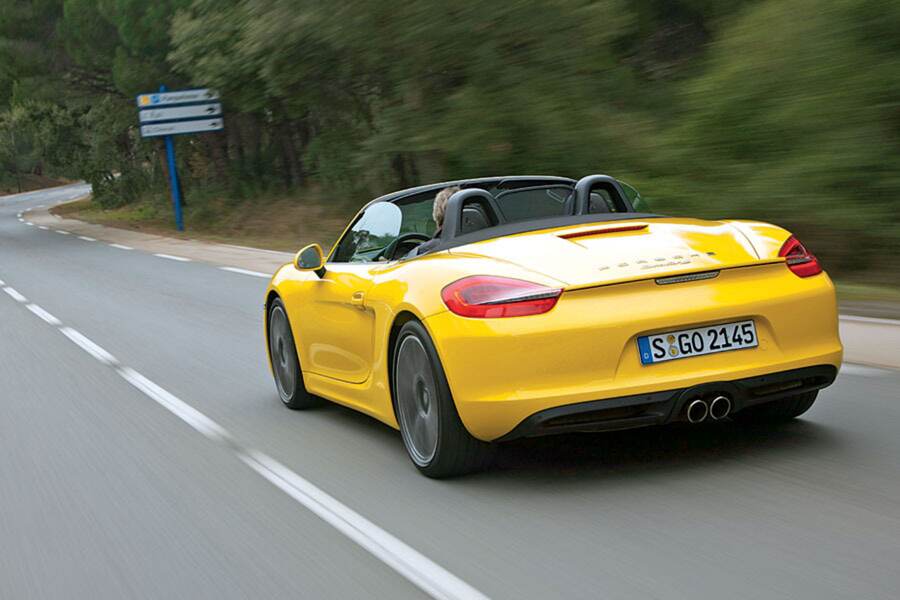 The interior makes the same leap in quality the 991’s did, and what looks good in a six-figure Porsche looks fabulous in one costing mid- to high-five figures. The gauges ditch the old cursive Box­ster font for the iconic 911 font, while the 981’s dashtop gets Star Wars-ish fresh-air vents. The view forward is delineated by a 918-inspired crease down the peaked front fen­der, further differentiating the 981 from the 991.

Materials are top-shelf throughout, and the switch­gear feels expensive, too. The feel of the central locking and hazard light buttons, for instance, is as good as it gets — not just among Porsches but in all of buttondom. Qual­ity is found where you might not go looking for it, too: The rear speakers are neatly recessed into the carpeted firewall, with honeycomb grills that reference the roll-hoop grills. These are the kind of details that make a thing feel ex­pensive, and a Porsche should feel expensive.

Criticisms, past nagging concerns over steering ecstasy lost? Not many. A real hand brake is missed. The rising center console can cause a driver’s shifting hand to hit a passenger’s radio-volume-adjusting hand. The gauge cluster’s white-on-black speedo, white-on-gray tach, and computer screen aren’t easy on the eyes — but a black tach can be had at no cost. Unfor­tunately, there’s no gas gauge when the screen is set to nav. That and other critical readouts can be toggled to, but the analog speedo­meter is looking more redundant than ever. 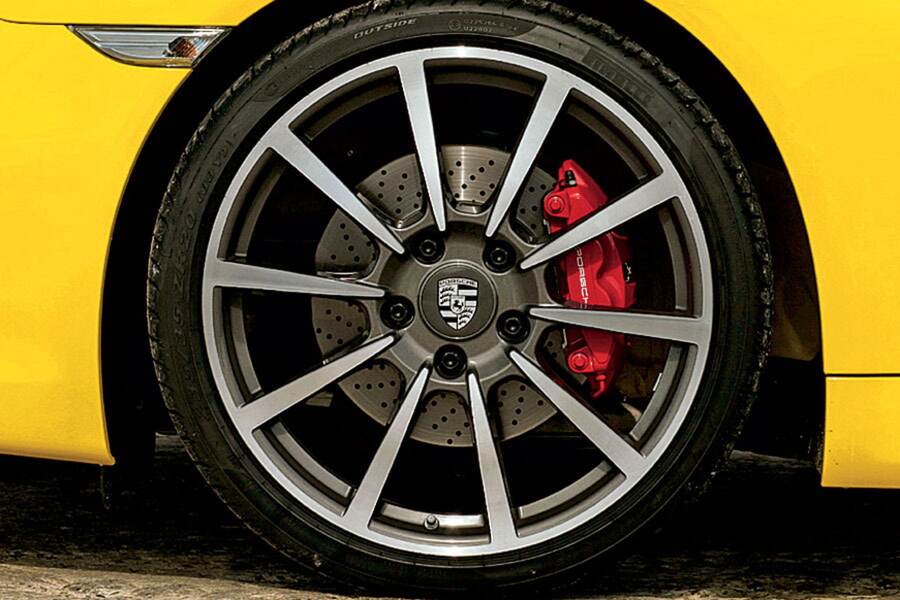 The 2013 981s arrive Stateside in June, and we can’t wait to put one on our North­ern California test loop. We’re sure it will be faster and more refined there, but a criti­cal question remains: Will it be more fun than the brilliant Boxsters of the past? 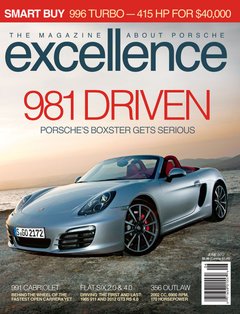