Cayman Interseries ramps up for 2010 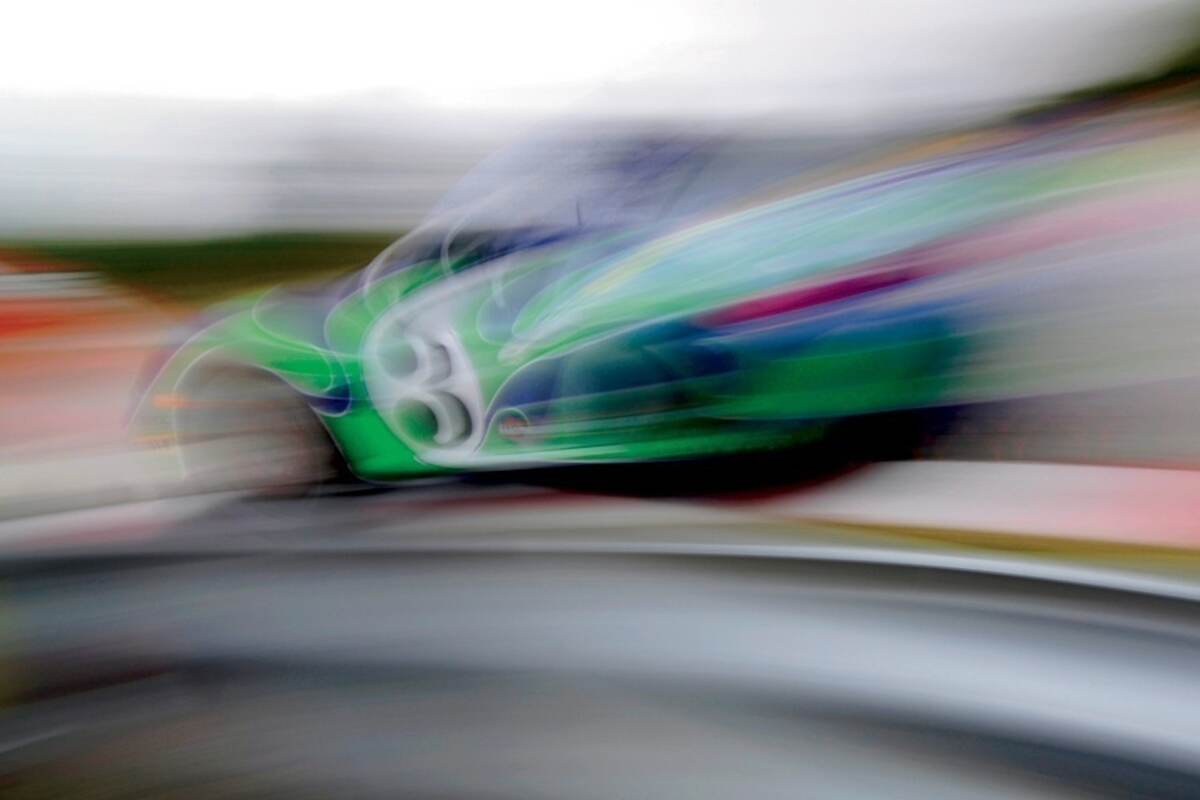 A blur of purple with swooping green curves. A flash of Gulf Blue, fringed with orange. Wait! Is that Salzburg Red? If you squint hard enough, you’d swear those are the curves of 917s, it’s June 1970, and you’re at Le Mans. But covering your ears is necessary to maintain the illusion, because those sure aren’t 4.5- and 4.9-liter flat twelves wailing by. They’re 3.4-liter flat sixes, the curves belong to 987s, the date is October 2009, and you’re in Savannah, Georgia.

Running in conjunction with HSR this weekend, the Cayman Interseries is in the midst of its second event, ramping up for a full-season of racing in 2010. HSR? Doesn’t that stand for Historic Sportscar Racing? Well…yeah. And isn’t a Cayman among the current Porsche lineup, not to mention, a car Porsche AG doesn’t race? Well…yeah.

“They’re obviously not historic Por­sche race cars,” admits competitor Neil Gehani readily. “But they do embrace Porsche’s deep racing history.” After all, every Cayman eligible to compete in the series sports a historic Porsche racing livery: Hippie Car, Gulf-Wyer, Rothmans, Hawaiian Tropic, Löwenbräu… While they might not fully adhere to the spirit of HSR, watching the cars circulate the 2.6-mile Hutchinson Island track, it’s hard to deny that the idea is a pretty cool one. 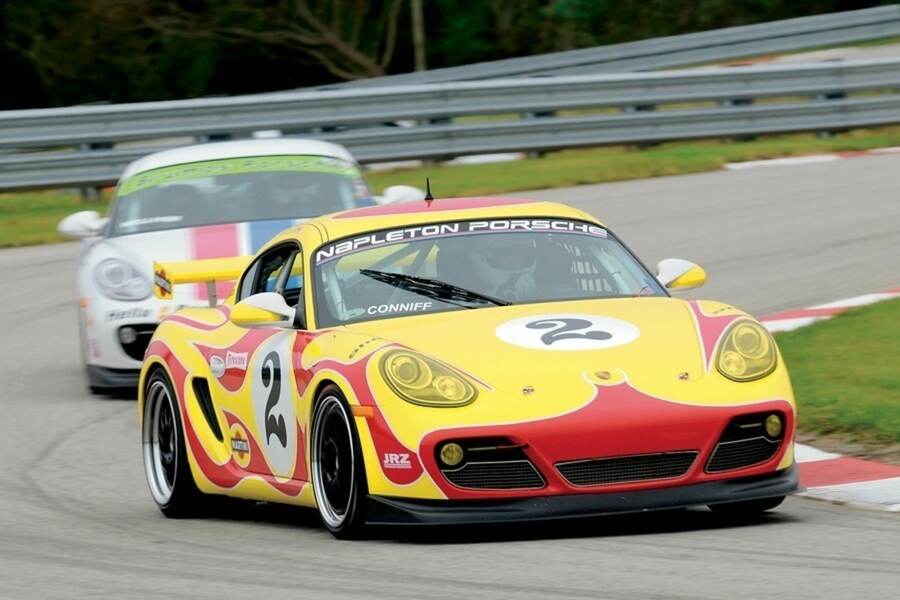 The series is the brainchild of Ron Barnaba, General Manager of Napleton Porsche in Chicago. Barnaba cut his teeth with his own Porsche race shop before moving to Brumos Porsche for nearly a decade, so he was immersed in all levels of Porsche motorsport from the beginning. When he moved to Napleton seven years ago, he brought that dedication to racing with him. Soon, he put one-day and two-day driver education programs into place for Napleton customers. In 2008, he started a Masters Program, an extended school for graduates of the one- and two-day programs.

“You spend a lot of time in the classroom and a lot of time driving on the track with pro drivers,” comments Gehani. “It’s then that you really start understanding the physics behind driving cars.” For these events, Barnaba utilized Autobahn Country Club near Chicago. He cast a wider gaze, as well — offering Mas­ters graduates an opportunity to learn at some of the country’s best tracks: Wat­kins Glen, Road Atlanta, Sebring, Road America…

For several years, Barnaba had considered a cost-conscious, single-model, amateur racing series. Then one car in the 2009 Porsche model lineup crystallized his thought process. “With the up­dates to the Cayman S, I knew we had the car to build a series.” 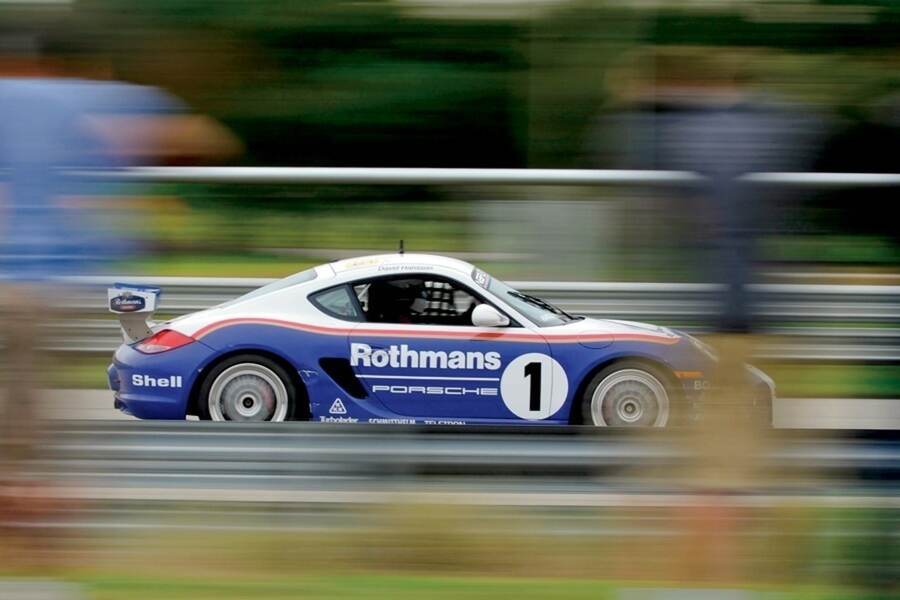 Oiling issues, power-steering issues, and ABS issues were all addressed in the Cayman’s first significant update. As Barnaba points out, “The new engine has five separate oil pumps, the power-steering pump is cooled differently and has rerouted lines, and there’s a new Siemans ABS system. Those were the three big­gest problems people were complaining about, and Porsche fixed them all.” Bar­naba placed a call to longtime friend and HSR competition director Ken Fengler, 21 Cayman Ss were ordered, and the Cay­man Interseries was born. 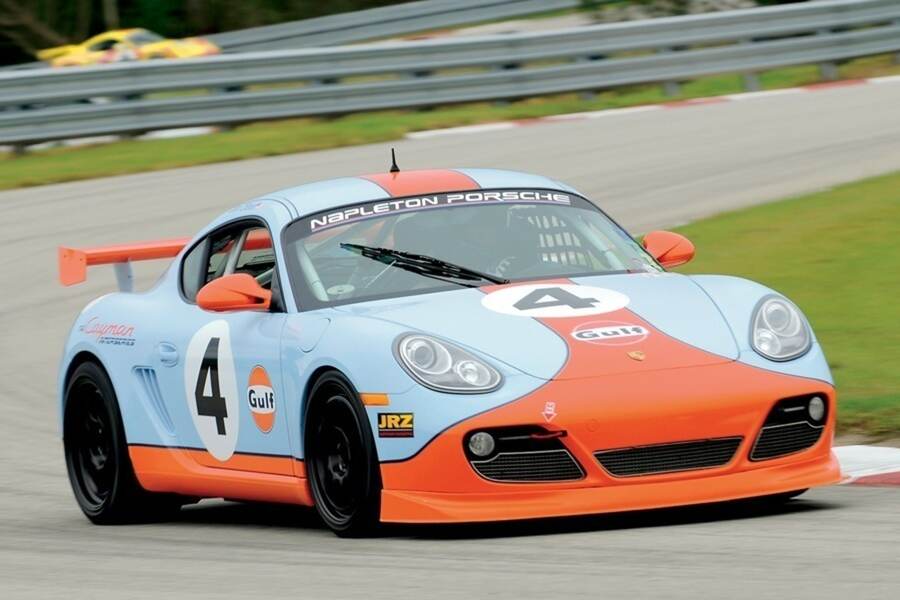 Brakes remain stock but for Pagid RS­29 pads, racing fluid, and stainless-steel lines to ensure a firm pedal in tough racing conditions. Cooling is via GT3-style ducting up front and NACA ducting in the rear. Air flow around the car is managed by an Interseries-spec front splitter and an adjustable GT3 Cup-like rear wing. The engine, transmission, and ECU remain “sealed” against tampering, but a spec muffler replaces the delivered unit and an additional center radiator is in­stalled to help keep the 3.4-liter six cool.

The goal is a spec series in which the driver is the lone determining factor, so no additional modifications are permitted. The turn-key race cars can be purchased from Napleton for just under $92,000, and a parts “kit” is in the works. The only items necessary to make a car race-ready include competition wheels, Hoo­sier R6 DOT racing tires (245/35 up front, 295/30 rear) an optional (but recommended) data-acquisition system, and a historic Porsche livery. “We even throw in a free tank of gas,” chuckles Barnaba.

Riding with longtime pro driver Jack Baldwin — whom Gehani refers to as the “series competition mentor” — for a few hot laps, it’s interesting to experience a Cayman S that has most of its civility removed. Most notable are the sounds. The song of the flat six resonates through the cabin as sheet metal seems to hold its tune. And that’s capped by a distinct, mechanical whirring of the gears in the upper octave range. Unexpected is the suppleness of the ride. Sure, it’s stiffer than stock — but it’s much more compliant than, say, a GT3 Cup. 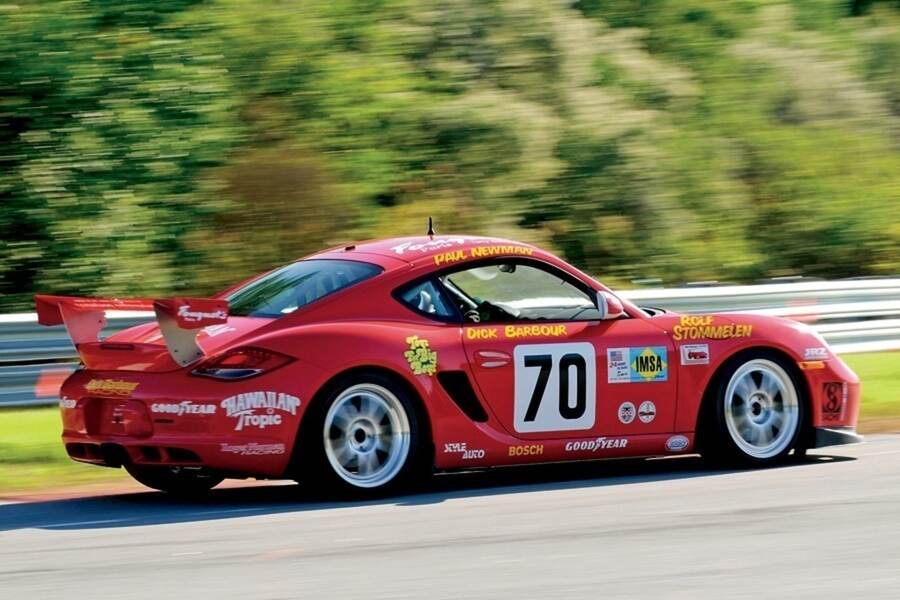 “It needs to be forgiving and easy to drive for these guys,” explains Baldwin, who adds that most of the competitors are still fairly new to the track and very new to wheel-to-wheel competition.

Gehani pilots the Porsche-Salzburg-liveried Cayman, inspired by Porsche’s first overall winner at Le Mans. While he won’t soon be mistaken for 24-hour victors Richard Attwood or Hans Herrmann, he’s shown formidable aptitude behind the wheel, showing well at Road Atlanta and running at or near the front as the Savannah weekend progressed. He’s quick to point out that the series is as much a classroom as it is competition.

Stroll through the Cayman Interseries paddock compound, and you’re likely to see Baldwin leading a discussion on avoiding trouble during race starts and restarts, or an AIM representative teaching competitors how to analyze track data and leverage that to improve lap times. “Jack even walks the track with us,” adds Gehani. “He’ll stop and say, ‘Look at this; this corner is off-camber. Look at that; you don’t want to hit that rumble strip.’ There’s a lot of time and effort spent educating us.” 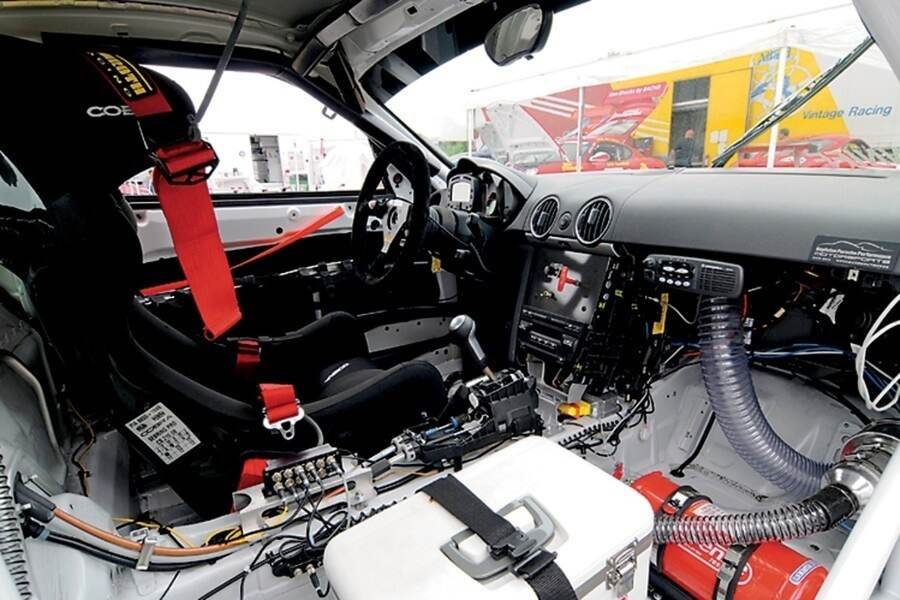 In 2009, podium finishes in both sprint races and an enduro victory by Gehani in Savannah were followed at Daytona by a sprint race victory and another enduro win. Gehani missed the fourth and final weekend of the 2009 Cayman Interseries at Sebring, but he amassed enough points in three events to be declared the inaugural season champ. And as the season progressed, the field sizes expanded from four in Atlanta to the low-teens by the year’s end.

Barnaba is enthused not only by this growing interest but by the reliability of the cars throughout the year. “Collec­tively, we put probably 35,000 track miles on the cars now and there have been zero mechanical failures,” he says. “For us, it’s been normal consumables: tires and brakes.” Then he starts glancing around for a piece of wood to knock on.

Still, the development season uncovered a few areas for improvement. Notes Gehani: “Porsche’s limited-slip differential was definitely not enough for track conditions. There was too much wheel spin in some corners. And when we went to Daytona, we found some PSM issues. The computer thought the car was flipping upside down on the banking and would throw us into limp mode.” 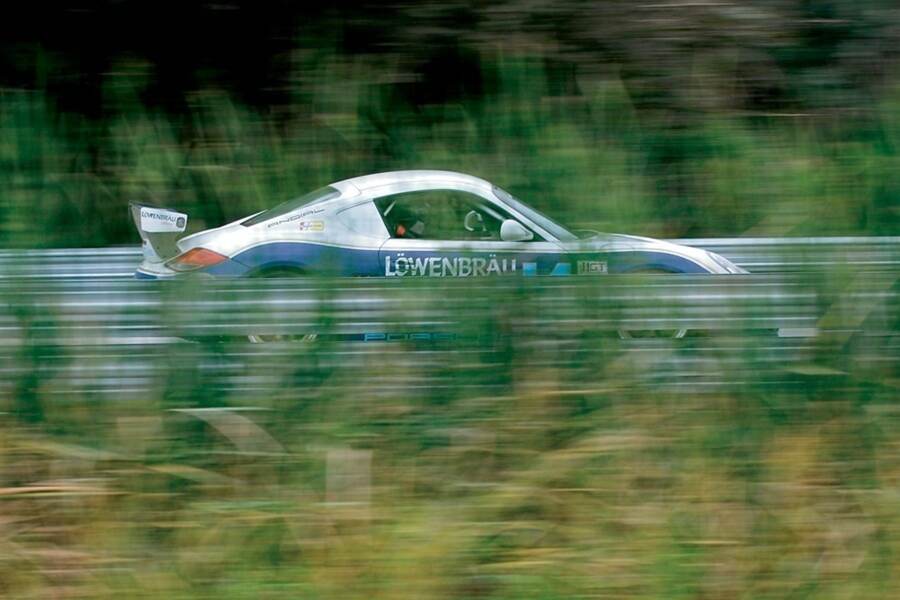 Ten 2010 Interseries-spec Cayman Ss will be built prior to the commencement of the 2010 season with, Barnaba hopes, an additional ten by mid-season. These will include a new limited-slip differential, updates to PSM, and revised brake ducting. The three-part upgrade package will also be fitted to the 2009 cars as a one-time update to bring everything to 2010 specifications. The specs will then be frozen for the year to help contain costs.

On that front, Barnaba reckons that a budget-minded competitor can look to spend between $4,000 and $6,000 on the low end for a race weekend. Those looking for a full-service “arrive and drive” experience, complete with pro coaching as offered by Napleton, might be looking at $8,000 to $10,000 per weekend.

Compared to the $20,000 to $25,000 being spent by many amateur competitors in the IMSA Patrón (GT3) Challenge, the Interseries’ cost-conscious aspect is clear. And that doesn’t even include the fact that a Cup costs twice as much as the Cayman and is far more expensive to maintain. Says Barnaba: “If you break a Cayman axle, it’s not $3,500; it’s about $350. Even if you blow a motor, it’s eleven grand to replace it…” Outright, a GT3 Cup motor runs about six times that much. 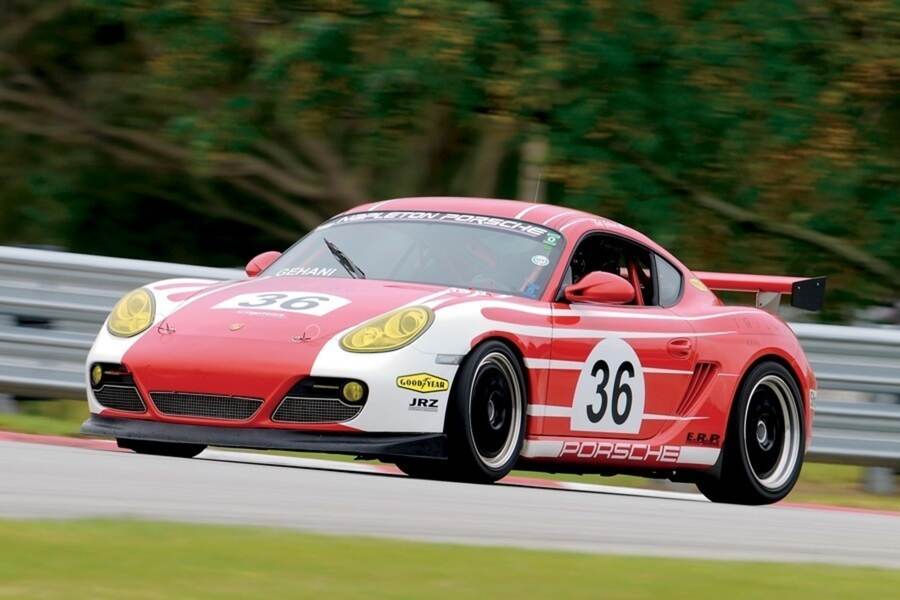 Yes, the Patrón Challenge puts the strength of IMSA behind the series and brings more attention to the competitors, but Barnaba is looking to address that as well. Beyond running with just HSR in 2010, the Cayman Interseries has inked to run in support of Grand-Am at Watkins Glen. New Jersey Motorsport Park is a hopeful addition, and a shared weekend with SCCA Pro’s World Chal­lenge series is in the planning stages. With field sizes expected to grow into the 20s — “I think we’ll see 25 cars at some events,” says Banaba — it’s a series worth watching.

“It’s fun, it’s easy, it’s cost effective,” adds Baldwin. “I don’t know what we’re missing in this equation.” And if it continues to grow, that streak of gold with bold red script on the hood you see at a track in 2010 just might be Miller Time. 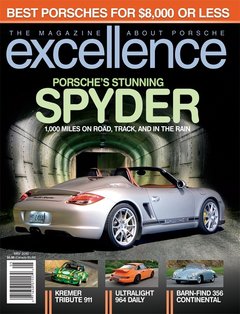