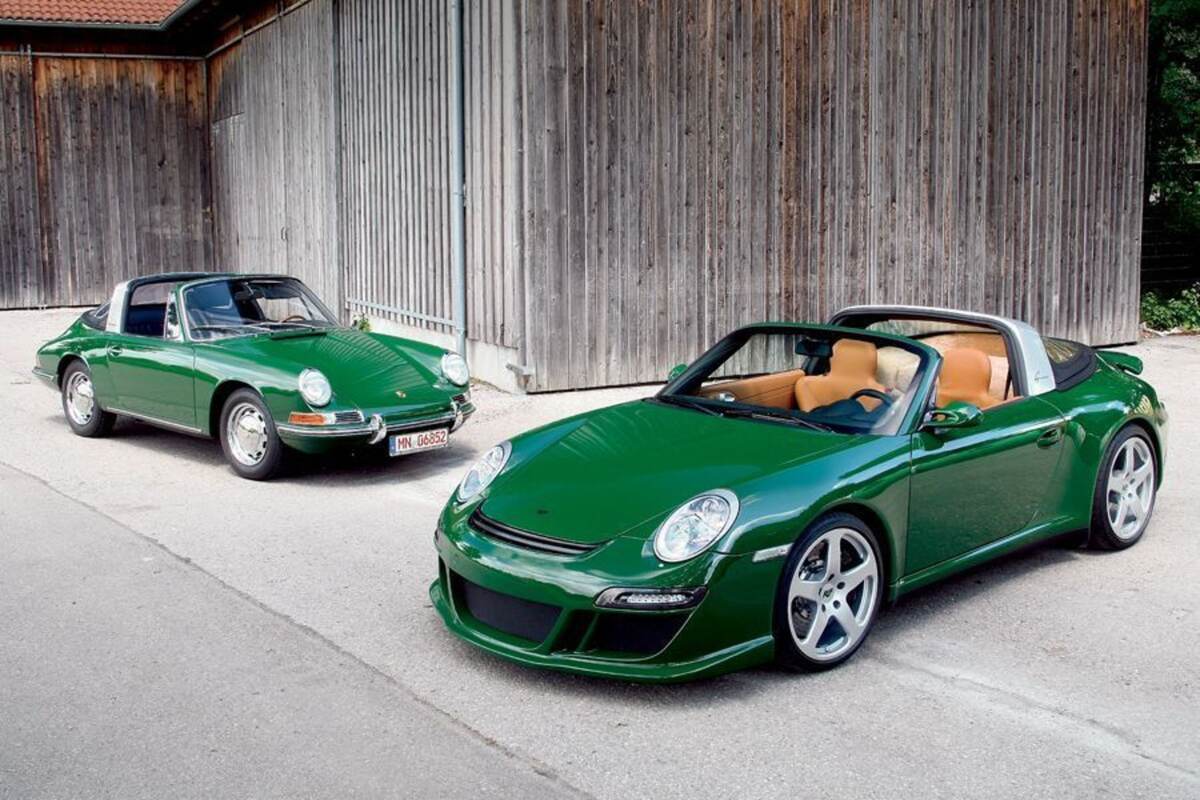 “The eRuf Concept Model A was a purely experimental car, one we used to explore the technology available at the time,” Alois Ruf says, admitting that the finished car was far from ideal. Battery technology kept the project from being as capable or practical as he would have liked, but that was part of the plan: “We knew that we would benefit from technology advancements a year or two down the road,” he says.

Enter the Ruf Greenster, the next evolution of Ruf’s electric-car thinking. The Greenster is the second-generation Ruf electric, both in terms of design and technology. After establishing maximum-range parameters with the Concept Model A, Ruf approached the design of the Greenster with a view toward making it both more elegant and more user friendly, as well as more of a production model. Fittingly, the car will see limited production — in the coming months, Ruf plans to complete up to 20 examples. 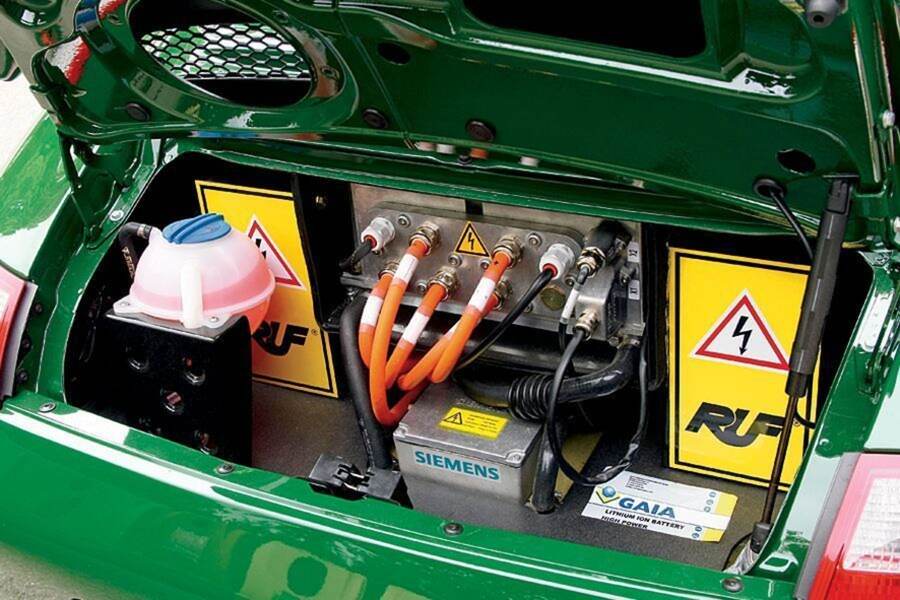 At 3,638 pounds, the Greenster is 551 pounds lighter than the Concept Model A, and it retains the 911’s forward luggage compartment. (The Model A sacrificed that luxury for increased battery capacity.) “One of the ideas behind the Model A was to see how much range we could squeeze from the batteries,” says Ruf. “With 51 kilowatts of batteries, this turned out to be 300 kilometers, dropping to 150 kilometers in hard use. By comparison, the Greenster carries 31 kilowatts and has a range of 250 kilometers. Drive it like a Porsche, and that figure drops to around 120 kilometers.”

The Greenster also departs from the Model A mold in one very significant way: It does without a manual transmission. “The electric motor has so much torque,” explains Ruf, “that it simply does not need six speeds. We saved 198 pounds by deleting it.” A single ratio and a mechanical differential replace the six-speed transaxle used in the Model A, and batteries occupy some of the newfound space. A small battery pack also sits in the area normally occupied by the fuel tank. Weight distribution remains similar to that of an ordinary Carrera.

As it stands, the reduced range of the Greenster is fine for urban use or a pleasure drive, but as with the Model A, the batteries take six hours to recharge from empty. “Our battery supplier, Sie­mens, is exploring faster charging systems,” says Ruf. “High-amperage charging systems like the one used by the Mini E are garage-based, and we want to have a compact, on-board charger that you can simply plug into the wall at home or at work.” 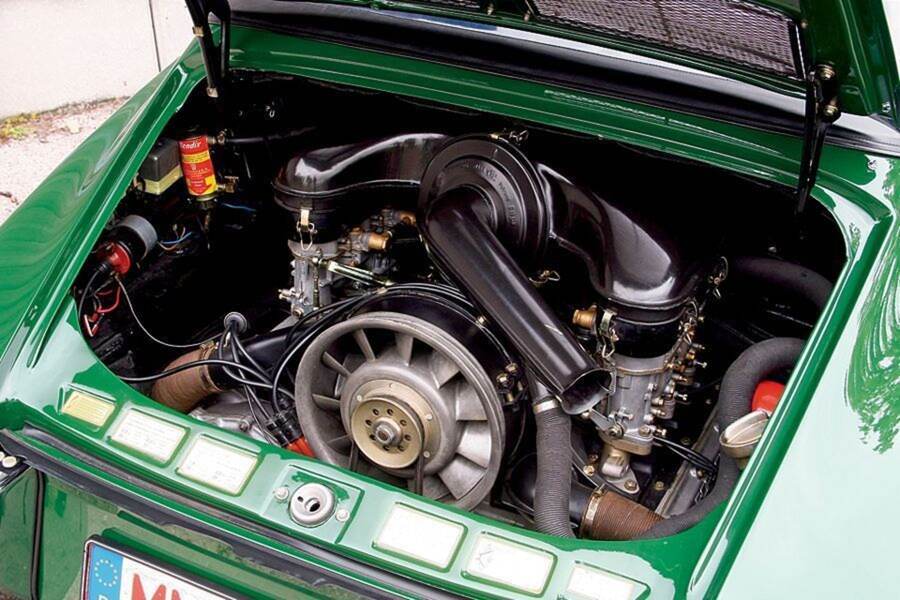 This is all well and good, but what of the roof? What of the body? How did Ruf produce a true, roll-bar-equipped targa? Easy: He did the same thing Porsche did when it built its first Targa — he used the shell of a 911 coupe as a starting point.

“The 911 cabriolet carries extra weight because of its electrically operated roof,” Ruf says. “The roof takes a lot of power to operate, and excessive power usage isn’t a good idea on an electric car. From a structural point of view, the cabriolet is also wanting — it has the stowage area for the roof, along with the folding metal panel above it that we do not need.” Structural rigidity isn’t a problem after chopping the top, Ruf claims, noting that “Porsche rationalized the 997’s floorpan, incorporating the Cabrio’s stiffening into the coupe body shell.”

Still, the process wasn’t as easy as simply turning on a Sawzall. Porsche produces different rear panel pressings for the Carrera coupe and cabriolet, the better to merge the models’ rear wheel arches into their respective rooflines. As a result, Ruf craftsmen had to hand-fabricate new rear fenders from sheet steel. 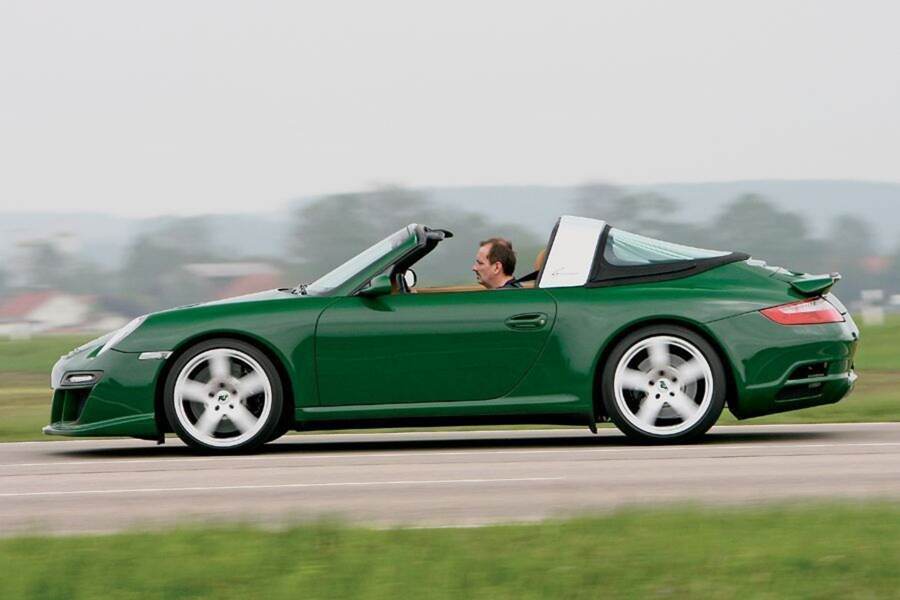 “Shaping the compound curves is a very labor-intensive process,” Ruf says, noting that he’s quite proud of the result. The rollover hoop is also hand-built, constructed from tubular chrome-molybdenum steel and welded to the car’s unibody. (Our photo car sports a painted cover on its hoop, but production Green­sters will benefit from a brushed stainless-steel piece, mimicking the bar finish on the original 911 Targa.)

One of the challenges was to avoid the slightly awkward look of the original Targa’s roof panel, which has to be flat in order to fold up for stowage in the luggage compartment. “That is why we decided to make a two-piece, detachable roof system,” explains Ruf. “That way, we can mold the right curvature into the panels to make the car look good when its top is installed. The most recent precedent for such a system is found on the Carrera GT.” Aft of the rollover hoop, a soft plastic rear window is fitted, a modern-day interpretation of the early 911 Targa’s rear window. Like the original, it zips up from the inside.

That, in turn, brings us to the other green car on these pages. The 911 Targa that you see here is part of Ruf’s personal collection, and it’s painted the same Irish Green as the original Frank­furt show car. It was the sixty-seventh Targa built, coming off of the production line in May 1967. At the time, Por­sche offered three Targa models: the four-cylinder 912, this 130-hp 911, and the 160-hp 911S. The car originally belonged to Jürgen Rinow, a Ruf employee who is now retired. Ruf’s restoration department refurbished the car in the late 1980s. 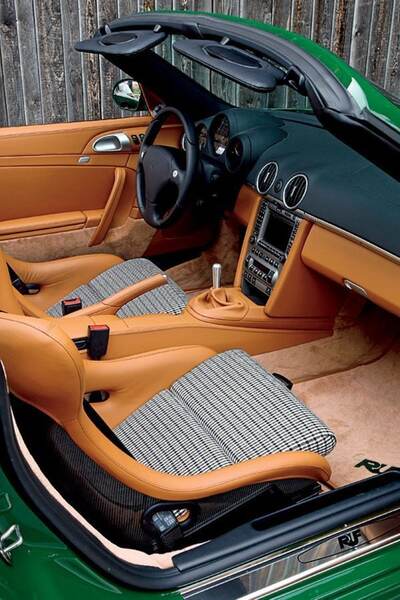 If the Greenster appears longer and wider than its ancestor, that’s because it is. Its roofline is also considerably lower. “I consider the Greenster to be a Speedster with rollover protection,” explains Ruf. “The windscreen is shorter than standard and the glass is custom. My intention was to make the car look as good as possible in every body configuration — roof panels on or off, rear window up or down, side glass up or side glass down.”

Ruf’s electric 911 looks every bit the relative of the 1967 model, a fact that Alois is counting on. “The idea behind the Greenster was to create emotion by combining the aesthetics of the classic 911 Targa with 21st-century technology,” he says. “When the first prospective eRuf customers came to look at the car, they asked for an open version. For them, an eRuf would be a third or fourth car used on weekends and holidays, and a coupe did not appeal. This allowed me to finally indulge in an old idea of mine: recreating the ’67 Targa as an electric car.”

Seeing the 20th- and 21st-century versions of the 911 together is a unique experience, but there’s another twist to this comparison: The powerplants in both cars represent the extremes of over 120 years of automotive engine development. The ’67’s carbureted six requires some choke and a bit of knowledge to start from cold: prod the throttle a few times, turn the ignition key, and when the engine catches, you have to tap dance on the throttle to keep the car awake. 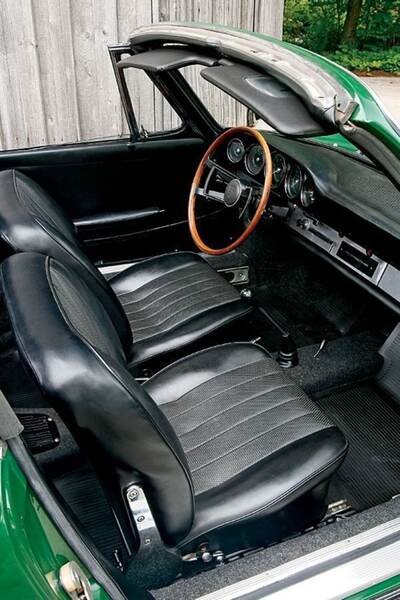 Once the engine is warm, things start to come together. The Targa’s throaty 2.0 liter is sharp and responsive, and makes a lovely noise. Its 130-hp output isn’t a lot by today’s standards, but the car only weighs 2,271 pounds. The steering is light and full of feel thanks to the low weight and remarkably narrow tires. This old Targa isn’t about sheer speed; it’s more a tool for driving enjoyment, and the combination of feedback and soundtrack makes for the perfect Sunday morning companion.

In many ways, the Greenster is the antithesis of an early 911. For starters, it’s dead quiet — so quiet it’s all too easy to sneak up on pedestrians. To be honest, it’s a little odd; the idea of a sleek sports car whooshing past with just a rush of air, the slight whine of an electric motor, and a bit of tire noise is more than a tad off-putting. But it’s also something you get used to fairly quickly.

Predictably, Ruf is willing to shortcut that issue for eager customers. The issue has already been raised: His firm made its name with tuned flat sixes, and some potential customers were interested in having a conventionally powered Ruf car with the Greenster’s looks. 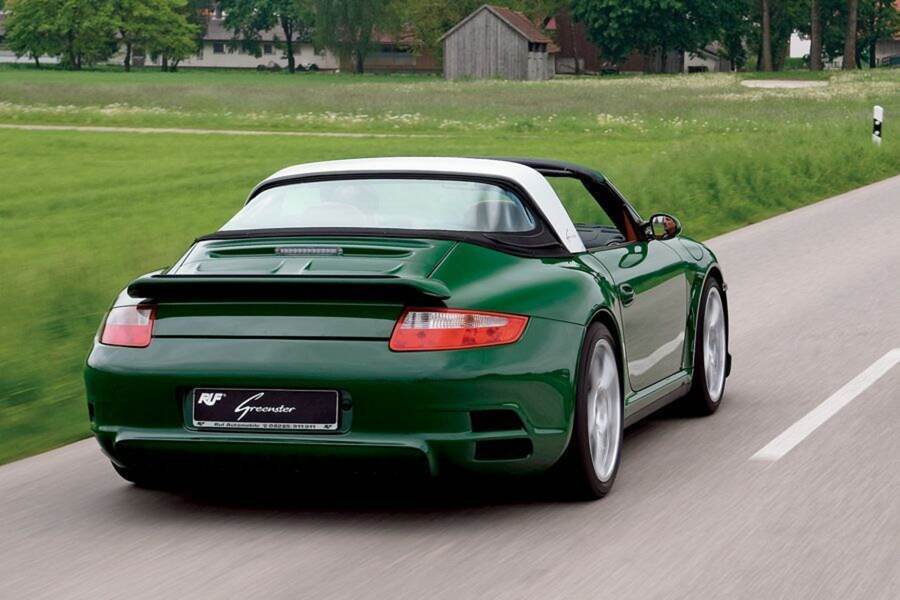 “That is absolutely no problem,” Ruf says. “You can have this car with a 3.6- or 3.8-liter normally aspirated engine, or with an R Kompressor or RT12 Turbo motor if you like. That said, the Greenster name only applies if you have electric power — a car with a normal engine will be a Ruf Roadster.”

Compared with the early 911, the Greenster’s ride is fairly stiff. This makes sense — the combination of low-slung suspension, high curb weight, limited wheel travel, and rubber-band tires doesn’t often add up to plushness. On the roads around Ruf’s headquarters in Pfaffenhausen, the Greenster found bumps in the pavement that the ’67 Targa’s long-travel suspension and tall tires didn’t even notice. The eRuf’s weight disadvantage can’t be ignored, either. The Greenster lacks the nimble, charming purity of the earlier car — or even that of a regular 997.

Still, all is not lost. At speed, most of the noise in the cabin is the rush of air buffeting around your head. The silence is strangely intoxicating, the forward pull both palpable and strong. It’s real supercar stuff, sans the supercar soundtrack.

Ruf has often shied away from motor shows, but the Greenster is so on message, both in terms of its looks and its complete lack of exhaust emissions, that a presence at this year’s Geneva motor show was de rigueur. As­­­ Alois hoped, both press and public reaction was overwhelmingly positive. In the Green­ster, showgoers saw that enthusiasts will find ways to make sure alternative power doesn’t spell the end of driving fun. 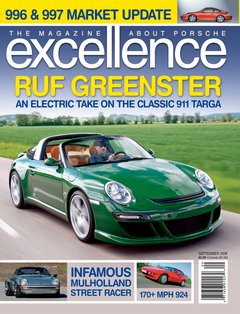