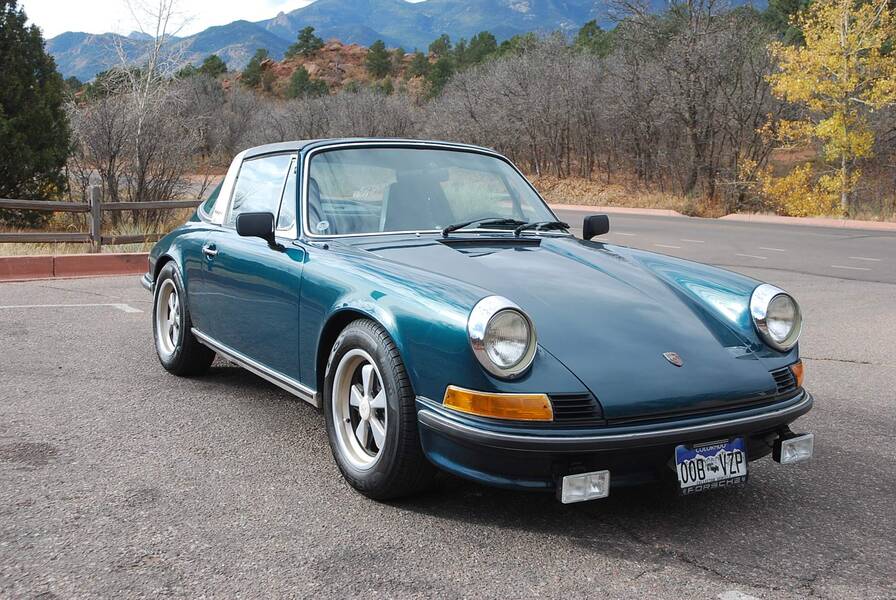 For Sale: 1973.5 Porsche 911T Targa
This is a wonderful, great-driving, unmolested vintage Porsche. As a 1973.5 911T, it is a very rare model. Only a half year of the very first production Bosch CIS fuel injection before it changed in the 1974 model year.
It has had two owners since the 1980s, both in Colorado, and both have taken very good care and spent lots of money restoring, maintaining and improving the car to make it into a reliable and enjoyable classic. Records back to the 80’s included.
The previous owner did the restoration on the body and some mechanicals in the late 80s and early 90s. The current owner purchased it in the 90s and finished the restoration work and has done lots of maintenance over the years.. Total work consisted of some metal replacement, paint, new carpet throughout, Suspension, brakes, engine reseal, CIS fuel injection rebuild transmission rebuild,lots of wiring replacement, all new seals and more.
This car is simply a hoot to drive. It steers super well, thanks to upgraded front bushings and turbo tie rods. It handles and corners great, thanks to newer rear bushings and an upgraded sway bar and Koni adjustable shocks with wider 15×7 Fuchs wheels and 205 section tires. Brake system has been completely gone through and hoses upgraded to braided stainless steel. The wheels were purchased as NOS items from Woods wheels restoration.
The interior is very nice. Carpets were replaced during the restoration, as were the deteriorated door pockets with upgraded fiberglass versions that are visually indistinguishable from OE units. The sound system has been upgraded with a 90s period Alpine cassette unit and multi disc changer and speakers. It all works very well. Seats were replaced with later model tombstone units that are much more comfortable, but not 100% period correct. The steering wheel is a period Dino sport model (slighter smaller diameter). Sun visors are slightly later model Targa units that work well – stay up or down as positioned, unlike most older ones. Dash has an aftermarket hard plastic cover that wouldn’t be noticed by non-Porsche people. The heat works great, and the blower fan operates on all 3 speeds. The speedometer was replaced and rebuilt at 95k miles, now has 42k so total of about 137k on chassis.
The engine was resealed and upgraded chain and tensioners when the restoration was begun. A pop off valve was added to the airbox, and the CIS was completely gone through and improved and rebuilt as needed. It starts up easily, cold or hot. Fuel pump was relocated to the front as a common anti-vapor lock improvement. Throttle Valve Compensation unit was removed (wasn’t used on any later CIS injected cars). Other than a puff of oil smoke on startup, it runs like a top. Points were replaced with electronic ignition. Larger turbo sump plate was added. Oil tank was replaced with a new one, oil hoses replaced. SSI stainless heater boxes were added. At about 150hp, with a lot more low end torque than the 911S, these are much more driveable in town and punchy in the canyons in mid range. Top end – an S will obviously make more power, but to live with, the 911T is great and enjoyable.
Transmission was rebuilt and axles replaced. CV boots are a little loose now and should be resealed. It shifts very well for an early 915 box – if you let the syncros work like they are supposed to, it’s a great, tight Porsche box with a short shifter.
Exterior is good, with caveats. The paint presents well – it’s a metallic green and looks great in the light. It has some defects (chips and some DA marks underneath) but it isn’t bad. The front bumper is an upgraded ‘S’ version with the spoiler lip. The front 73 bumper rubbers were removed, the rears are still there. It cleans up the look of the front a great deal. The Targa top was rebuilt by the specialist, Dave Brown and looks and functions very well. Headlights are upgraded Bosch H4 units, and has relayed PIAA fog and driving combo lights. Lighting at night is improved a huge amount.
The only things that are inoperative are the rear window defrost and the clock – likely easy wiring fixes. Everything else works – including the interior dome light and underhood courtesy light, turn signals and cancellation, all exterior lights, As mentioned, the paint is a color change from original and isn’t 100% perfect, but not bad. Dual batteries have been upgraded to a combined single Optima unit. A very recent thorough inspection was just done by a classic European car specialist shop – available for serious parties.
Overall – this is a perfect classic Porsche for someone that wants to be able to actually drive and enjoy a 911 instead of parking it in the corner of a shop as a collector piece. The cosmetics aren’t perfect, but that’s why you can drive it and not cry if you get a rock chip or if it rains or gets some road spray on it (though it has been a dry only car for many years). A perfectly restored one of these goes for $120,000 to $140,000 so this one is a bargain at $75,000 to be able to drive and enjoy it, and possibly even repaint and bring back to original and have some money left on the table now or in the future as values go up.