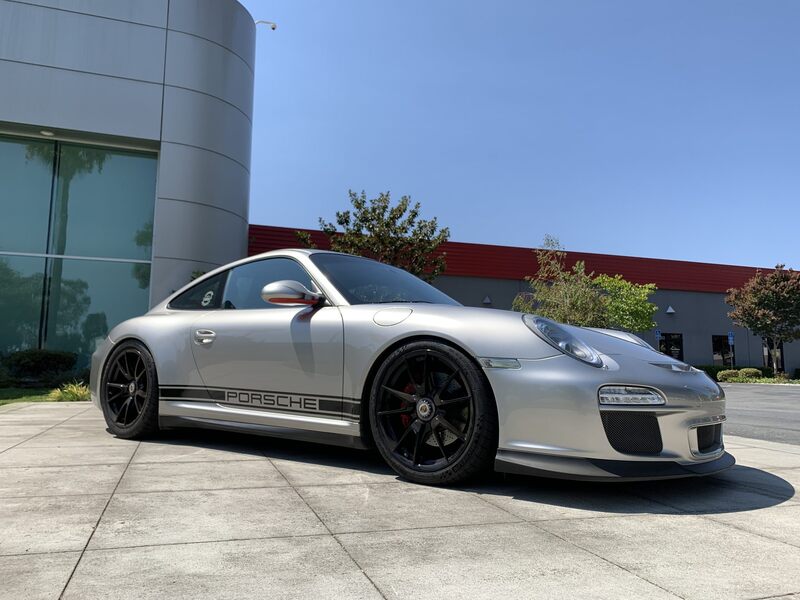 Often referred to as “The 997 R that Porsche never built” this modified 2012 Porsche 911 Carrera 4 GTS is a very special car. $63,741 was spent upgrading the body, engine and suspension to create this unique Porsche. Changes to this platinum silver and black 3.8 liter 408 horsepower, PDK, all wheel drive Porsche 911 include:
- GT3 front and rear bumper covers
- Akrapovic Titanium GT3 center exit exhaust
- MCS Coilover suspension
- GT3 sway bar
- KW hydraulic front lift system
- GT2 RS 19” center lock wheels
- Ceramic-coated black SPM exhaust tips
- GT3 center radiator
- Guards red Porsche seat belts
- Cobb Tuning access port Stage 1 with PDK tuning
- Pioneer multimedia audio w/ Bluetooth connectivity
- Paint protection film
The end result is a unique 997 model inspired by the 911 R that Porsche produced in 2016. It has the similar conservative aggressive look as well as enhanced power and handling as the highly sought after 911 R. Thomas Lee of SP Motorsports in Hayward , CA, the creator of this vehicle said “ My intention was to create a 997 R that no one had ever built before. The way I built it is how I imagined Porsche would build it. And I know for a fact that this car may be the only one in the world that has all the proper modifications and installations. It’s the correct spec.”
The present owner bought the car in September, 2020 from RRS Motorsports in San Jose, CA. He has driven the car approximately 4,000 trouble free miles. To his knowledge, it has not been tracked. Service records go back to 2018 when the modifications were made. The car was last serviced on October, 2021 at which time the battery was replaced and the car was aligned. The vehicle has a clean Carfax with no accidents or damage reported. At present, the odometer reads 46,106 miles. Replacement value according to Auto Appraisal Network is $145,100.