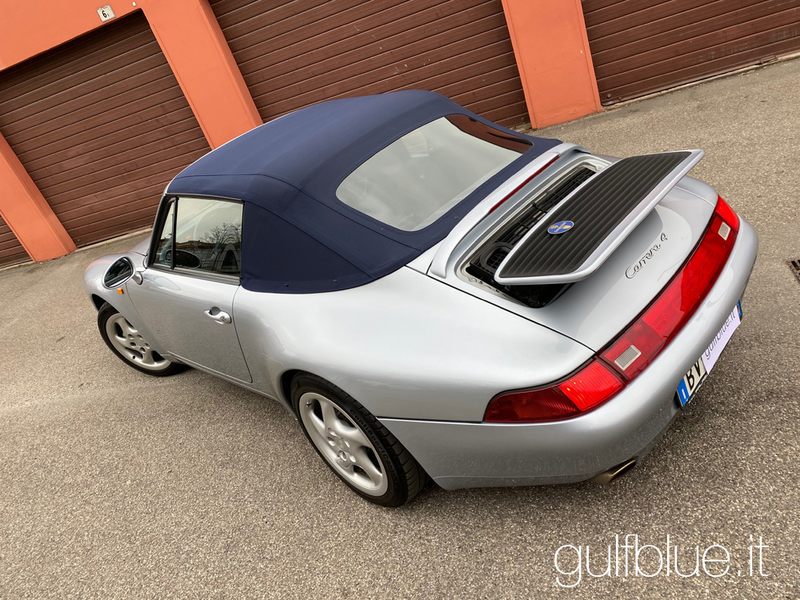 Porsche 911 (993) Carrera 4 Cabriolet MY’96, perfectly preserved. It was purchased by the first owner at the Porsche Dealer in Bolzano and registered the 1st June 1996. Three owners kept the car after the first one: the last owner bought it by a friend in 2011.
Thanks to the Varioram system this 993 represents the last evolution of the air-cooled engine with 285hp; together with the 4 wheel drive and the six-speed manual gearbox it is a wonderful mix typical of the driving pleasure of the 911, even everyday.
​
The car is in its original Polar silver Metallic (mainly first paint) with blue leather interior and blue soft-top; as options, the car has the electric mirrors, electric adjustable seats, the wind-stop the air conditioning and the onboard computer.

Together with the car, we consign all the invoices of the works done by the second owner on, from 2004; there are as well the specific keys with remote control, the manuals and service book, the Becker-Porsche radio, jack, toolbag, air compressor and the soft-top cover with its bag. Litronic xenon headlights and the aluminium door profiles Porsche Tequipment were aftermarket accessories, while the rear third stop light was standard in late MY96. The car has a set of winter tires (currently mounted) and the first equipment Cup wheels with summer tires.

During its 150.000kms the car was ordinary maintained but many extraordinary works as well were done, both mechanical than on the body: for example the soft-top was changed. The interior has been just washed and the paint has been polished and detailed with care.
​
This wonderful 993 could be seen in Bologna by appointment. Further details on www.gulfblue.it